A state of permanent armageddon 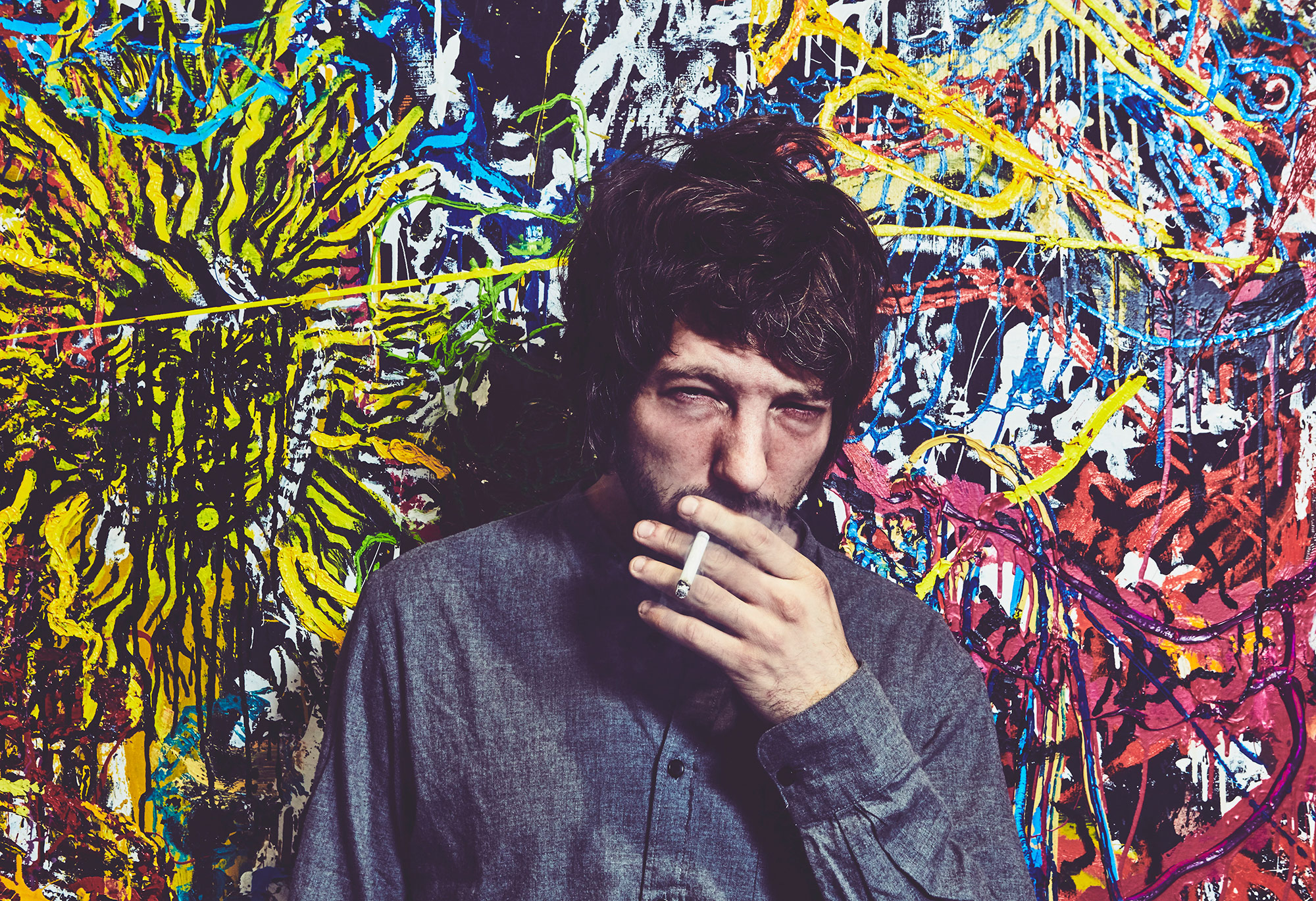 Orsten Groom is a phenomenon; one wonders where the frenzied fervour in his paintings could possibly come from, but once you have spoken to him you realise that it is merely a visual representation of his mind. His latest show, SIEG MHUND KALUMNIATOR, which is on display at Brussels’ Templon Gallery until December 23rd, draws upon the lives of Moses and Freud to form a collection of large chaotic canvases, which display a number of varying influences, from primitivism to abstract expressionism. We caught up with him to talk Codeine, Kafka and dream dinner-guests.
It’s hard to separate the facts from the fiction in the various snippets of biography of yours available online. Just who exactly is Orsten Groom?
Orsten Groom is the flag-name of the Macher self, the coat of arms of what I make as a mere principle of art - a Groom - as a separate entity from the civilian self and the identity identification trap, which is of no interest to me. Facts are some kind of police driven norms, whereas so-called fiction is the military siphon that drives the world according to its own laws. Like a pair of buttocks glued in humility in the roaming ground of a volcano, daisies or a wheeled box. Two legs good, but four legs better.
I am under the impression that the title of your current exhibition SIEG MHUND KALUMNIATOR is a double (or perhaps even triple) entendre; could you please explain it to our readers?
Here’s the deal: I’m quite an archaeological fellow, just like art, since it is the way that what 'is' relates to what 'exists'. And everything is always already there. That is a big deal for me – the Grand Already-There (as I call it). In archaeology, whenever you dig something up that was buried for some time, it is said that you’ve invented it. Etymology sets drum-doors the very same way in our own mouths - like some kind of ventriloquism.
This exhibition frames the entirety of history from Moses to Sigmund Freud, who perished from a jaw cancer in 1939. The patriarch of the Talking Cure dies from the mouth, right after releasing his testament book about the stuttering prophet. As if this wasn’t thrilling enough, I discovered through my archaeological process that the very last thing he handwrote was a bizarre tale about his favourite poodle, who happened to have died the very same way: mouth cancer! So, Sigmund made a lethal psychoanalytical transfer on his poodle.
This weird mouthful conspiracy was the starting point of my enquiries through painting and reading and, quite late in the process, I realised Sigmund’s very first name contains the most perfect and wicked pun: in German (Freud’s mother tongue), Hund means Dog and Mund is Mouth. So, gluing it all in -Mhund, not only looks a bit Aegyptian, but the remaining part turns into a Sieg (Victory) - that is to say the most taboo word of the German language, since its confiscation by the Nazis with Völkisch Sieg Heil.
To make a long story short, this whole process, which aimed to regulate the entirety of history down the sick oral triangle of Moses, Freud and this mad poodle - eventually turned out to contain (or invent, rather) in Freud’s very own name the Victory of the Dog’s Mouth over History (SIEG MHUND) and to rescue a cursed word with a stupid pun, by offering it a renewed use for the common sense. From YHVH to the parodic revelation of MHUND, the calumny of language saves art from history like a third temple that reunites Judaism and ancient Egypt. Good job!
At just 20 years old you suffered an aneurysm that left you with amnesia. You went on to rename yourself as Orsten Groom. What was the inspiration behind this name? Did you no longer feel any affinity with Simon Leibovitz-Grzeszczak?
That’s a tricky question, but the main thing is that if I couldn’t recall nor relate to my former self, he would still relate to what I had left as a reference point, an unknown model I was supposed to outlive and therefore illustrate. That was completely out of the question for me - even though it isn’t clear whose Dybbuk is who - I would hate this 'waste ventriloquism'. I went back to Art school because he / I was already there, and I actually am a painter because I already was one in a sense (or meant to be one out of ghostly blue). It’s always the same: the Great Already-There. So I plunged this archaic after-birth into the very matter of earth (paint, that is) and offered it a radical view of art as an impersonal yet truly intimate phenomenon; a duty towards this power that carries the origin, drowns every identity into the Styx of oblivion and turns all selves into beastly principles of life - and made it wear the mask of the Groom over the faceless one of this Simon Leibovitz-Grzeszczak fellow, who no one remembers anyway.
I forget about the Orsten part but it had something to do with a pun. 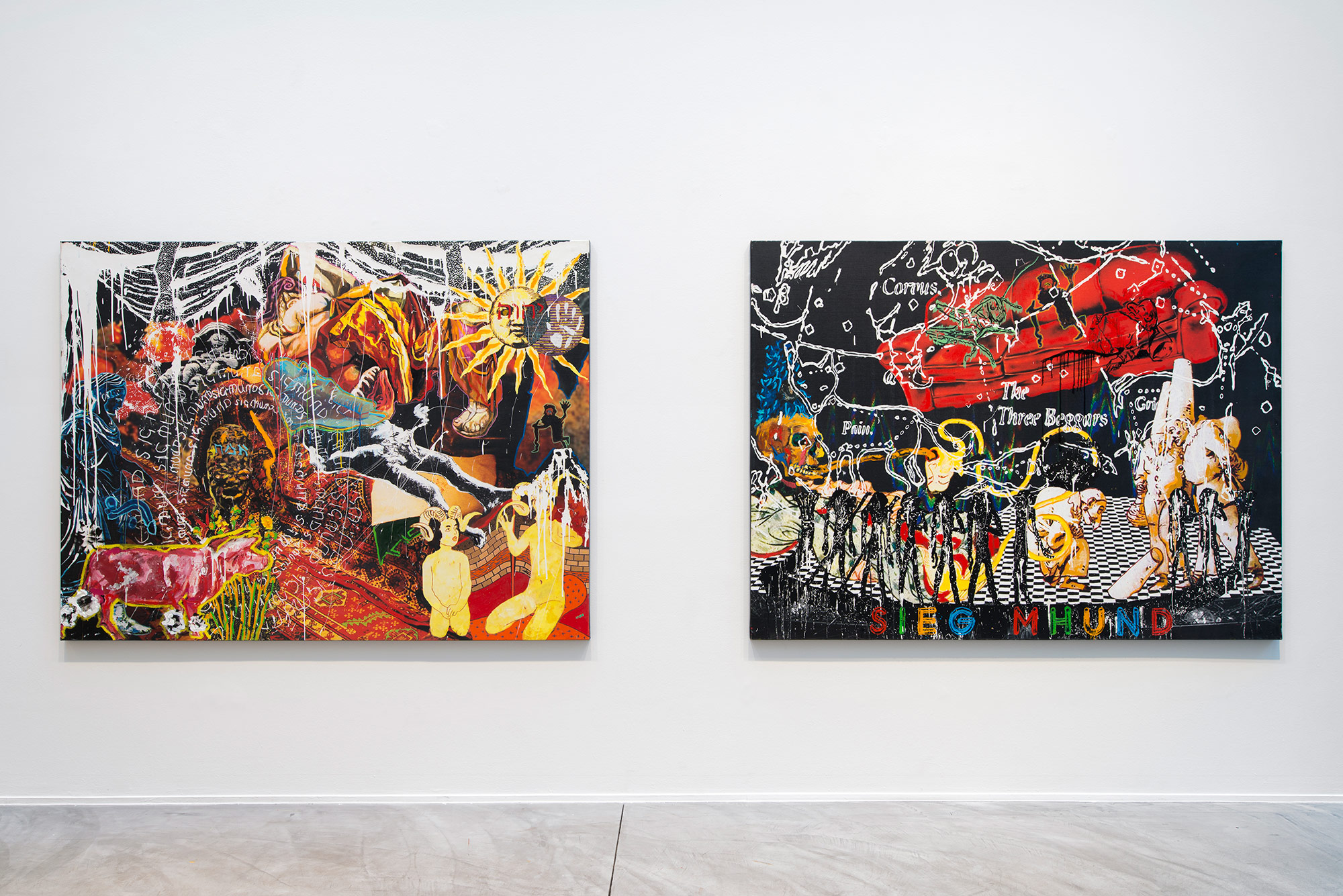 In your own words, German philosopher Friedrich Nietzsche is your ‘main man’. What do you make of his famous affirmation that ‘God is dead’?
20 years ago, I’ve found myself completely helpless in the posture of being both the Colossus - which is the fake cadaver effigy ancient Romans used to bury instead of the real dead - and that real deadened figure.I inherited the boy’s bedroom and immediately hated his book collection, because they were supposed to represent my ‘personality’, which was supposed to illustrate this absurd display of tasteI said: I am the new boss in town now, so I shall make my own opinions on these books. I read it all and made my own private selection: Dostoyevsky? Alright. Kafka Alright. Derrida? Down in the shite dump - and so on. The aim was to make sure I was the one ’n’ only producer of my feelings, interests, and tastes. So, one night I landed on the Nietzsche section and here’s what happened: from page 1 I had the eery sensation of reading myself - meaning the re-united self - understanding it all and grooving on top.
Nietzsche’s pure common sense to me, most of all because of its radical affirmation of life, making clear the distinction between forces and power, casting art as a wild impetus against deadly human norms - just like the Mexicans wave the carnivalesque Macabre against the afflicting Morbid. Captain Beefheart says: "We see the moon, so it's our eye. Animals see us, so we're their animals", and this reciprocity is the only politics I can take seriously. That’s why I believe in all that exists and adore this God principle for what it’s capable of - dead or not: a Schrödinger’s grin without cat. The important thing is to set your dignity to a higher Kafka standpoint: In man's struggle against the world, bet on the world. The world sees us at night while we can’t even handle if its round or fucking flat, and it’s always both night-time and daytime on the sun.
You said that in the time following your accident you were afforded an ‘unlimited prescription for Codeine’. Do you think that substances such as Codeine help or hinder the artistic process?
I was so ugly coming out of the hospital and roaming back to Art school I couldn’t make any social human connection: the cranium half shaved (the other half Robert Smith), and half of my face paralyzed for two years. But I had this prescription and soon enough everyone there was on Codeine. I don’t know shit from Shinola about the artistic process but one day one of these stoners ran sick to the toilets and I stole one of his oil paint tubes and smeared it all over the face of one of my former self’s self-portraits and found a grandiose joy in doing so: that was painting itself – dictating vocation to my jerking wrists. Paint’s the substance of painting and Codeine’s great - I also love traditional Eskimo chants.
One of the works on display in SIEG MHUND KALUMNIATOR is in fact called SIEG MHUND KALUMNIATOR. Did this work inspire the rest of the collection? Or was the eponymy a decision made in retrospect?
Both. 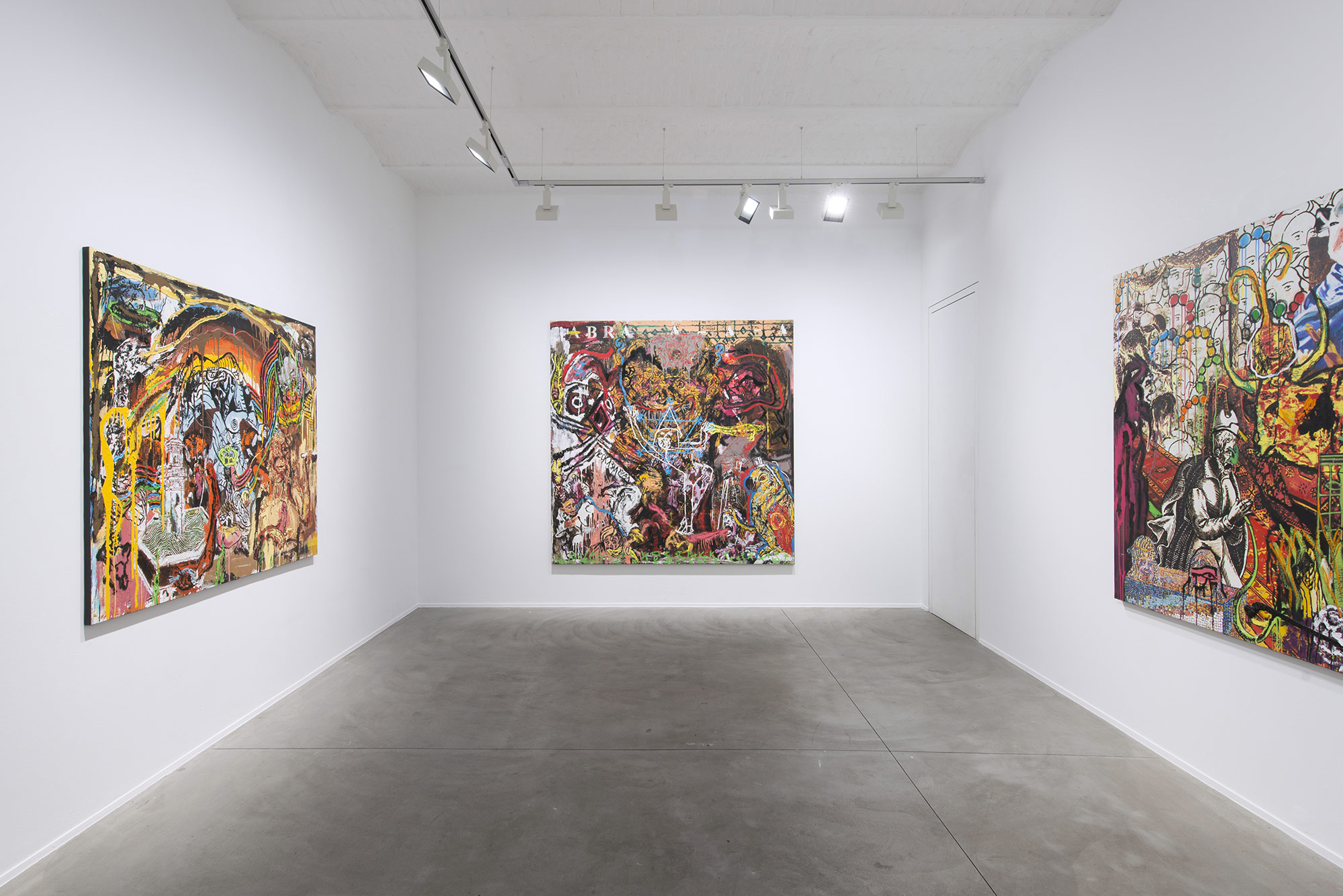 Both your artworks and your interviews are littered with references to cultural figures, from Freud to Frank Zappa, to Nick Cave and Kafka. To ask the age-old question: Dead or alive, who would you invite to your dinner party?
Firstly, this party should take place in Nero’s twirling dining room - but hopefully reversed under the cemetery ground of Dostoyevsky’s last short story Bobok - where buried chaps blabber about free will and making the most of being dead before turning into bubbles - and end up arguing whether or not to put on a gangbang. Also, I often think about how anguished Bergson’s mother must have been as a Polish Jew, worrying about Henri’s abilities to make up for his life creeping everyone out about time and duration while growing up, then how proud and relieved and surprised she must have been when he got the Nobel prize in French literature! I’d happily cast her in the ant’s role Hitchcock wanted to enlist at some dinner party for a prank, only to bully and humiliate her as an annoying alcoholic relative - but he was always too cowardly to do so, in dread of being punished in return. Copernic used to request baby elephants to wander at the bottom of his Frombrok observatory: I want them. I’d like to be invited too. Codeine for everyone!
Does art imitate life? Or does life imitate art?
Nothing illustrates nothing - not even itself. Everything that is anything is its own thing. Like ‘The Thing’ for example, even though its nature is to mimic and impersonate anything it reaches - just like art does.
But as Magritte once put it: “Every visible thing hides something that’s visible.” The invisible can’t be seen, for its invisible! But you have got to remember that scene where the Predator laughs at Schwarzenegger with Schwarzy’s own recorded laughter.
Galerie Templon refers to the CHROME DINETTE series as ‘evolving’; do you plan to continue adding to it? Or will your next venture be in a different direction?
Everything that’s dispatched in the CHROME DINETTE series either comes from the biblical Exodus episode or the Freudian realm - and I can guarantee that it is all there: the Unheimlich and the Egyptian plagues, the Wolfman and the flaming bush, you name it - in one way or another. The immense 5000 years long iconography that stretches between these poles permitted me to sample those topics through direct visual reminiscences, but also to convey some of them through Witzes and puns (sometimes unbelievably corny ones) - language being one of the core issues this frame regulates. It casted quite a monstrous staff to direct, both in melodramatic and logistical ways, and the inner mosaicism of it all suggested an obvious sarcophagus like frieze that ended up bewitching 18 large canvases - all in a very short time: only one month!
Of course, I realized afterwards I forgot wagons of puns and cryptic references, and the series was doomed from the start from its Talmudic nature of endless interpretations and commentaries. So, I was thrilled by the Templon gallery’s proposition to wrap it up and take it further on an ongoing scale. In addition, the series has burst out a brand-new complimentary branch of smaller formats: the TEN COMMANDMENTS, which focus on the Sieg Mhund in three Persons (Freud, Moses and Topsy the poodle). Stupefying! They will be more to come but for the time being, [for Orsten Groom] Brussels is the new calumnious Jerusalem. 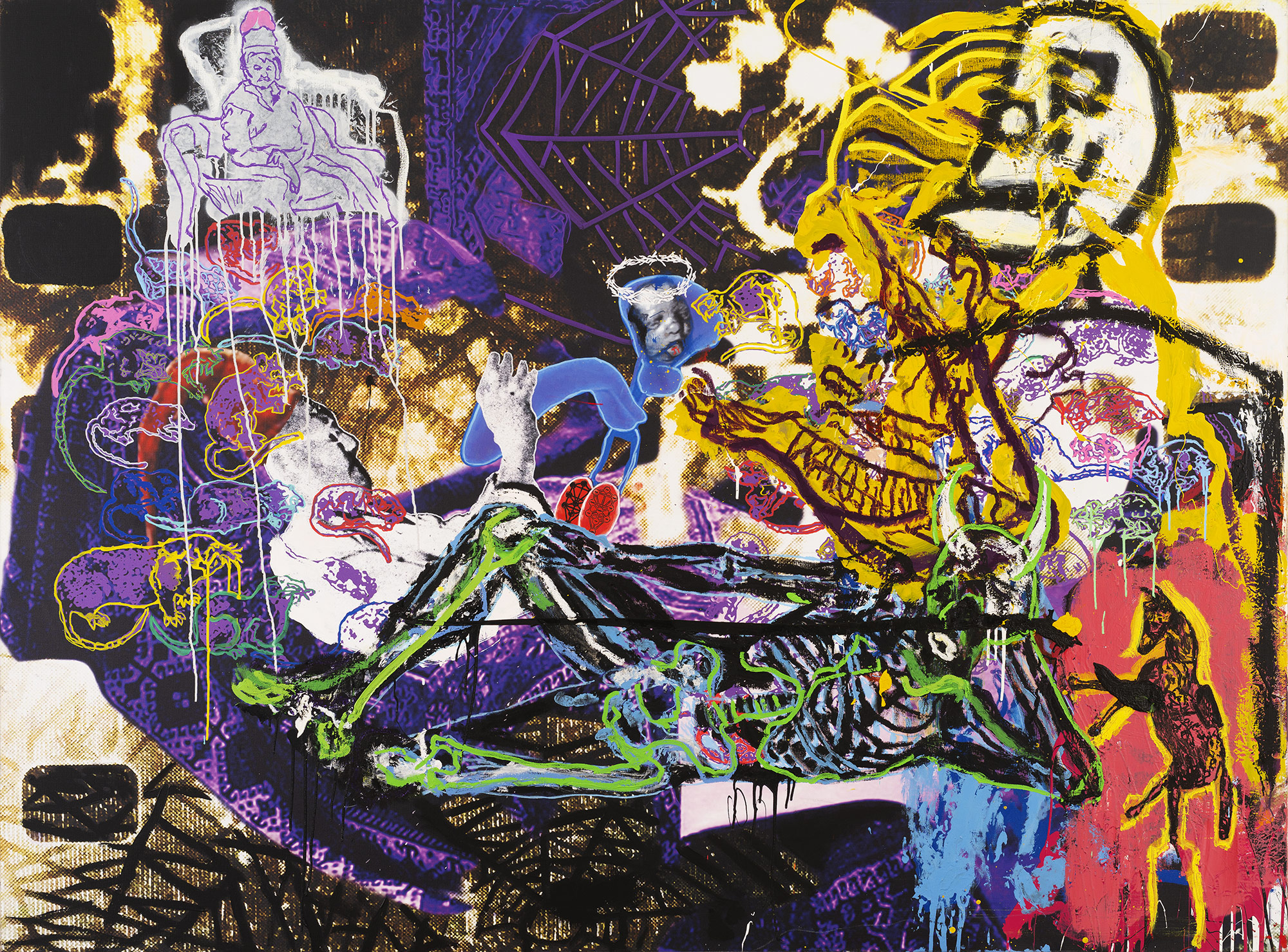 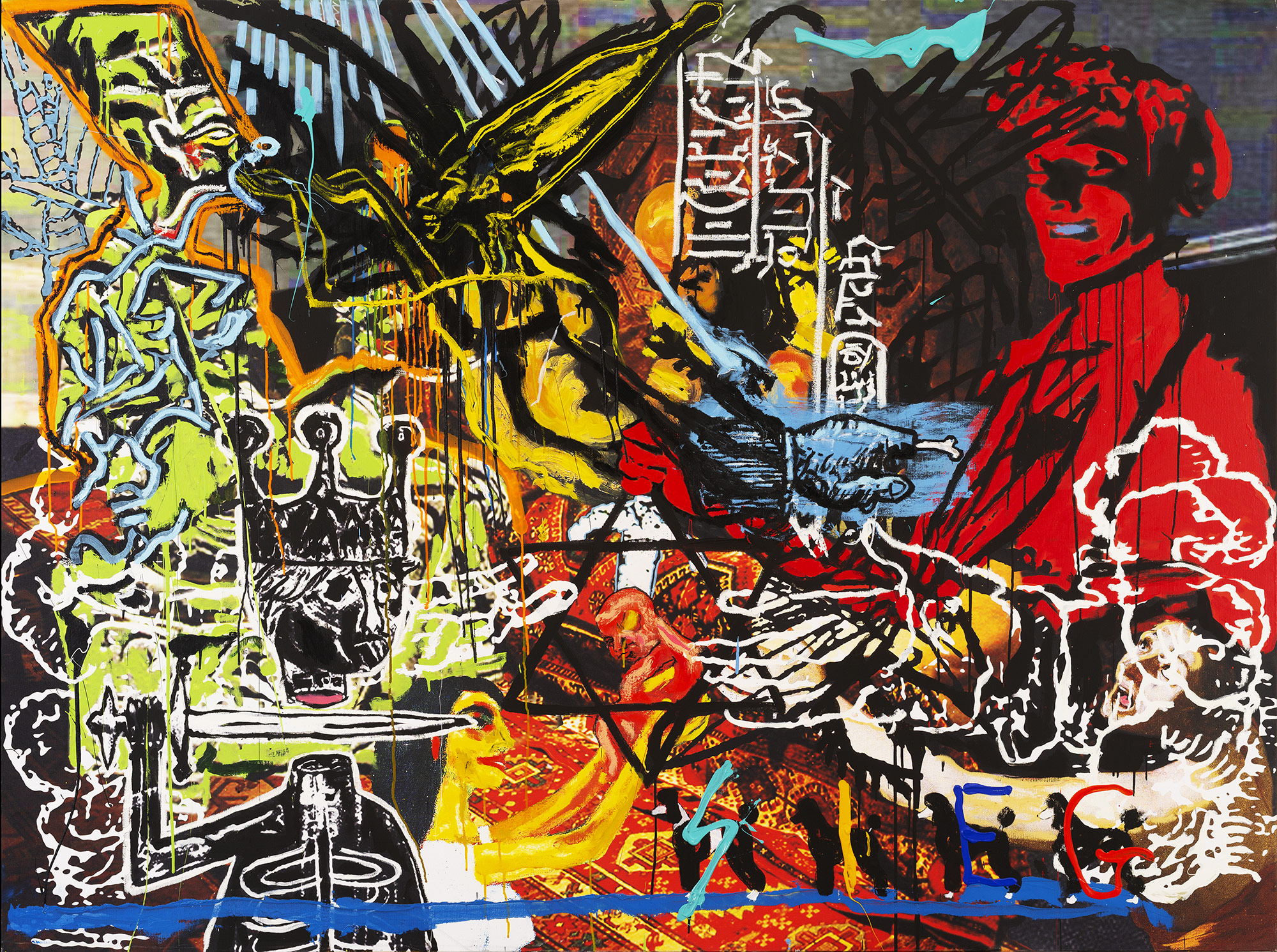 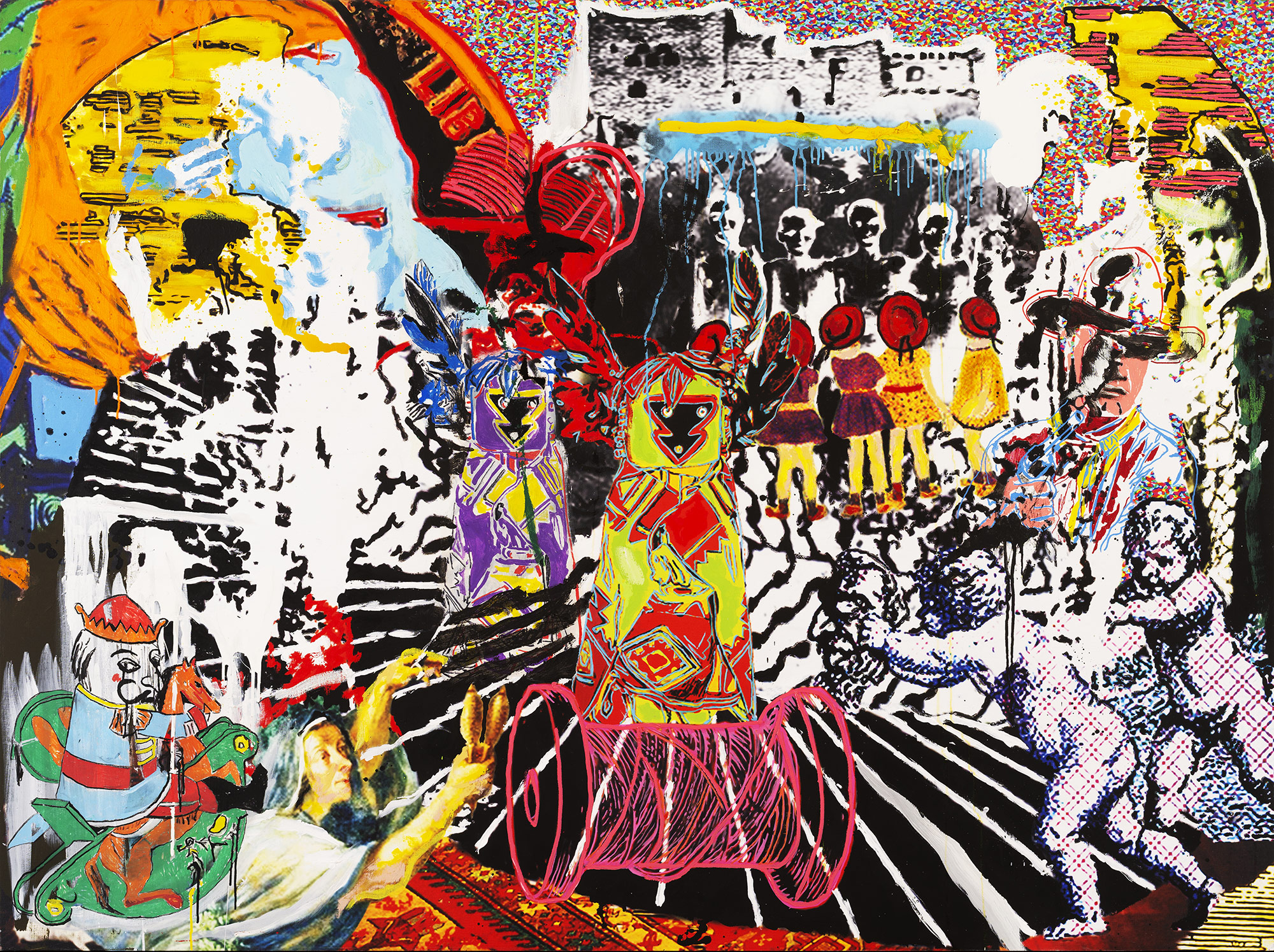 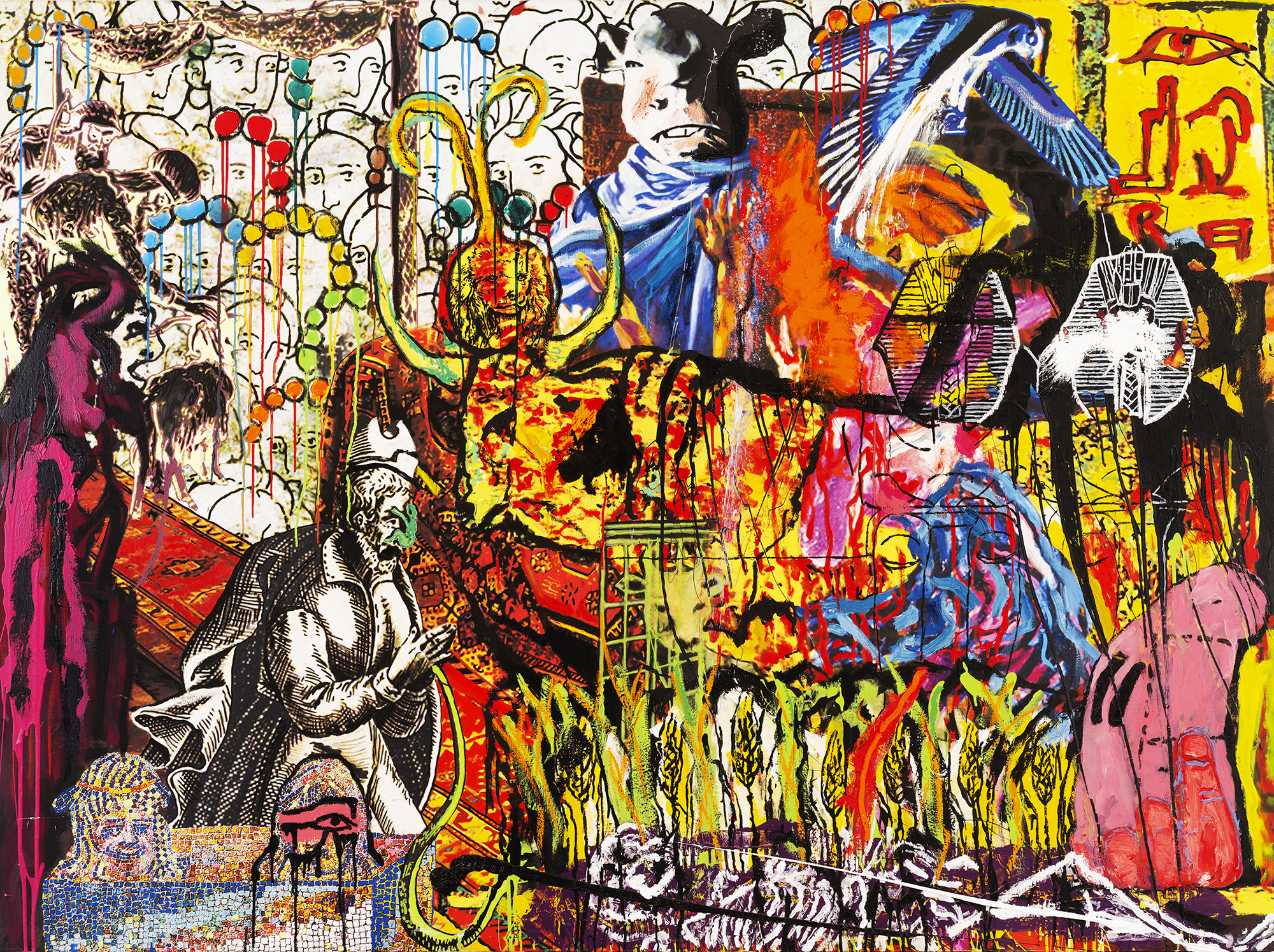 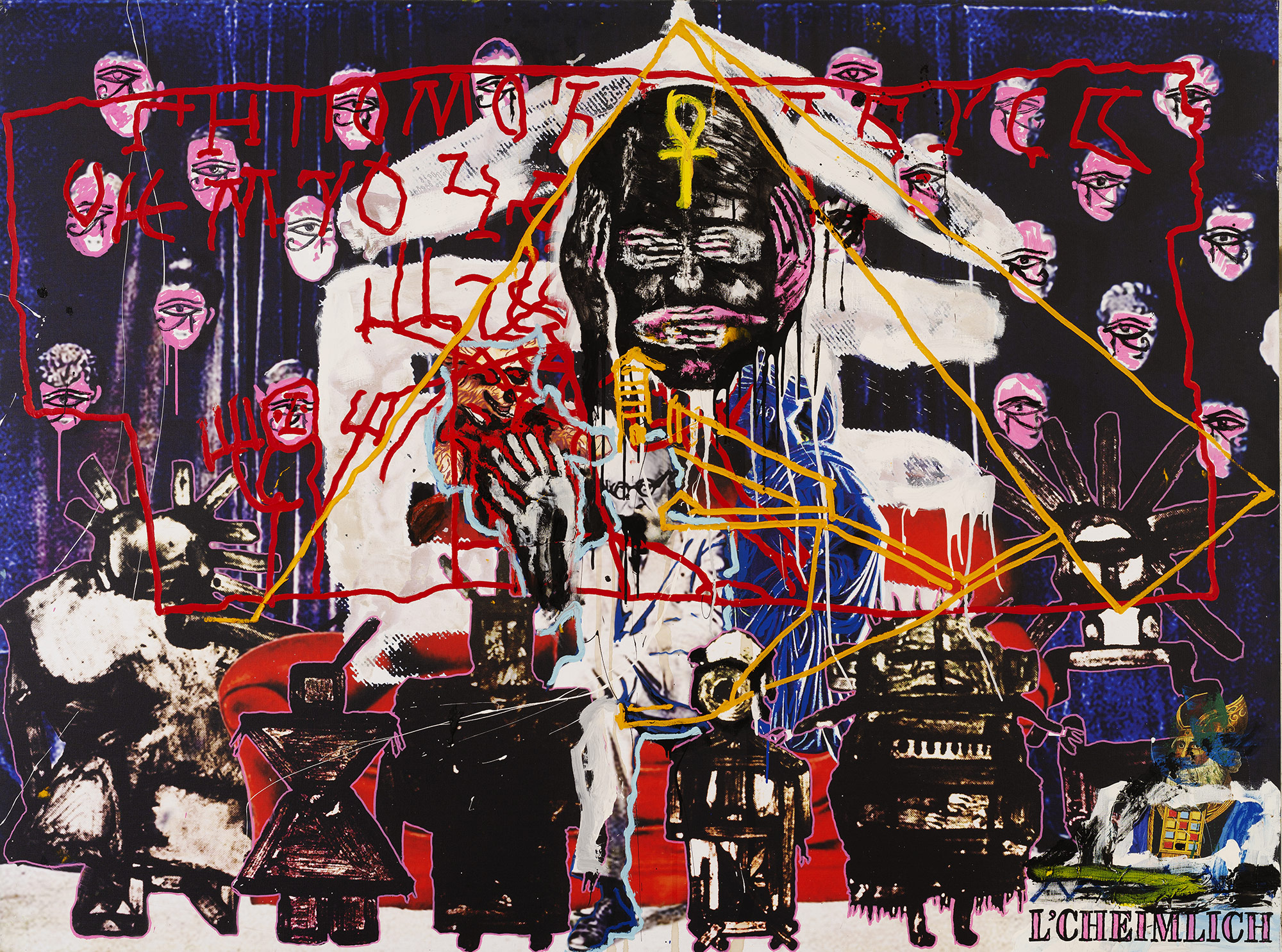 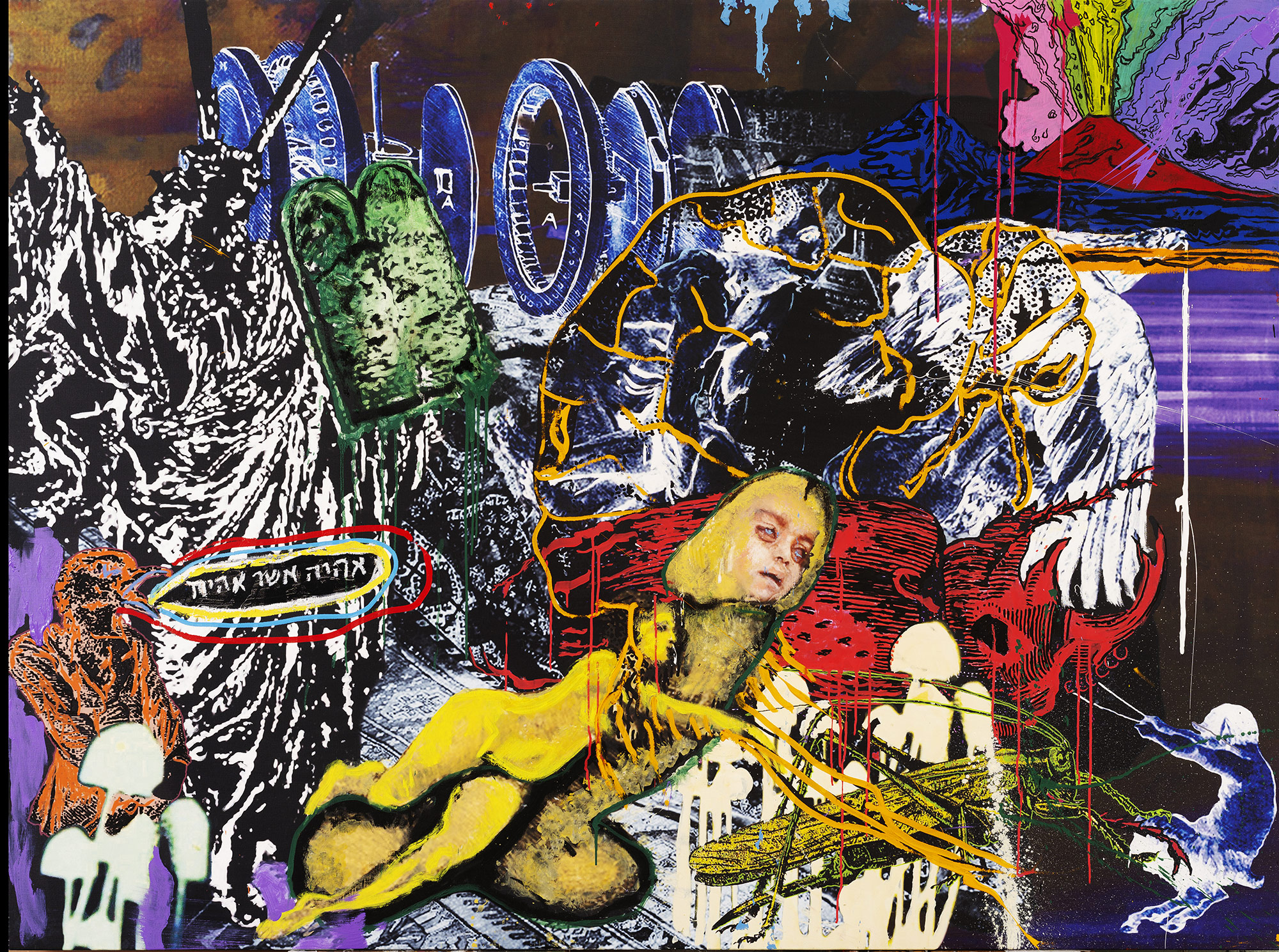 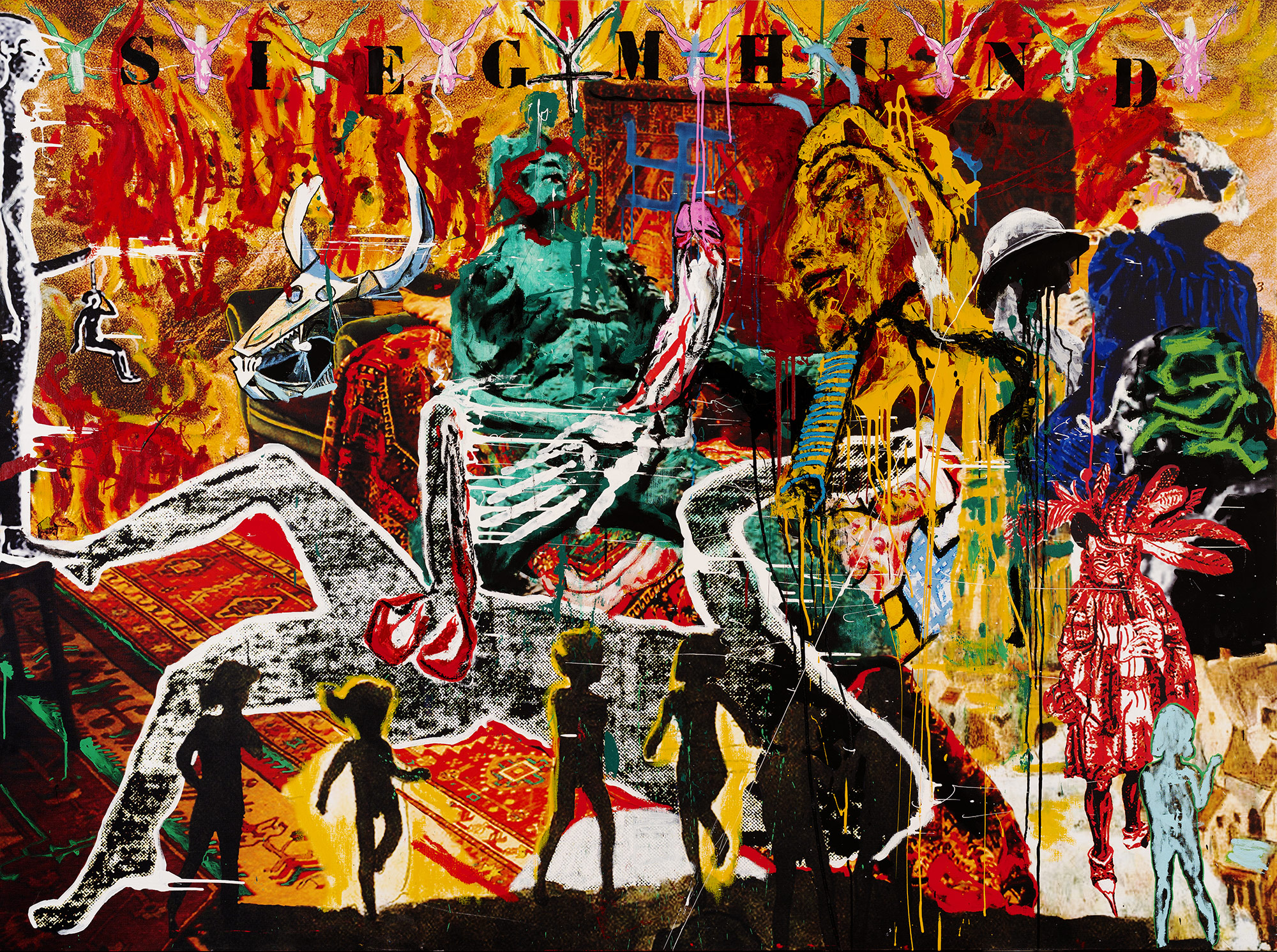