Dancing through the tears 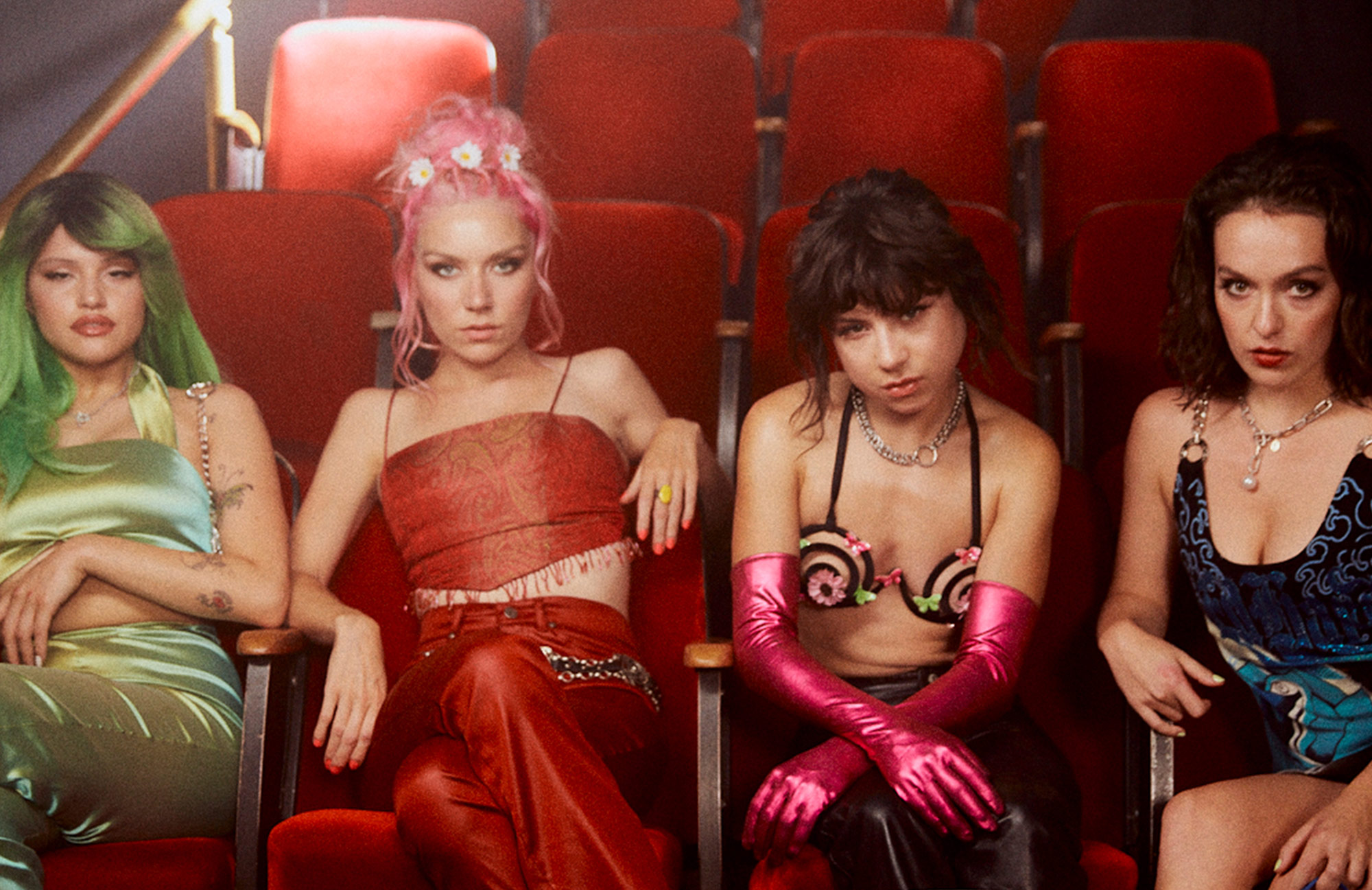 Nasty Cherry emerge out of precious time spent in lockdown recording sessions drenched in melancholia and with a deftly crafted EP The Movie in the palms of their hands. Throughout these five self-assured tracks we are led through a shattered house of mirrors where memories of past lovers and senses of self refract and merge. As you stumble out the exit you are left with a lingering sadness for what was but crucially with a sense of re-gained control of narrative and identity.
It goes without saying that Nasty Cherry have had quite the come up, their very creation as a band starting as a Netflix series back in 2019. The key link which holds them all together is pop icon Charli XCX who picked them all to play together and form Nasty Cherry, her presence is still felt several EPs later co-writing single Her Body and being involved in other aspects of the writing. Another key member of their team is producer Yves Rothman known for his work on Yves Tumor and Miya Folick, whose magic floats throughout this project. However, amongst these names and buzz it is clear they have created a unique voice for themselves which demands to be heard. Lyrics are not just that of lead vocalist, Gabi Bechtel, but of all the members; who through a collaborative approach to writing lyrics see an amalgamation of memories and experiences synthesized and expressed into tracks which enigmatically allow for multiple ways not only for them to feel their own experiences within this project but for the listeners too.

I joined Nasty Cherry on the brink of when their EP came out, a palpable atmosphere of excitement in the air, not just for its release but to be able to talk about tracks people hadn’t heard before and they hadn’t chatted about yet. Georgia joined from Palm Springs lying on her bed in a mirrored room, whilst Gabi talked whilst getting her makeup done on a set of some sorts, the others hidden behind their zoom icons (who knows what they were up to) - clearly however they were all living their best lives so we got stuck in.

Having the EP created last summer and in general with how the music industry works there can often be large gaps between creation and release - when did you start writing the EP and how do you reflect back on what you have made, is there a sense of detachment from it now?
Gabi: We started writing a year ago I would say, during quarantine when things were still very scary - not that they aren't anymore!
Debbie: Time has actually moved really slowly so I don’t feel as detached from it, whereas with previous EPs it felt like so much happened in between that it felt like it and it would feel ages away. It doesn’t feel that detached for me.
Gabi: We have also all been really involved in getting the songs exactly how we want them, talking to each other everyday. So if anything I have listened to this EP more than any other music over this time.
Did you all meet to write together then?
Georgia: We had to do two weeks alone in the studio.
Debbie: Three, babe, three.
Georgia: (laughs) So, obviously it was quite precious time, but honestly the ordeal of getting everyone together, actually makes it feel for me personally like ‘oh wow this is actually so exciting it’s coming out because I can’t believe we actually got to make it’.
Debbie: Yeah it felt very special!
Yeah it must have been special to all be in that space together.
Georgia: Yeah, it made me feel so thankful to have a band that I am so into and get to make music.
You worked with Yves Rothman and Charli XCX, with Charli XCX co-writing Her Body right? Were Yves and Charli there for the whole time in the studio? Was it online at points or in person?
Gabi: We were with Yves the entire time - so during the month we were writing he was there, guiding us through everything and he had his own ideas. And we had kind of worked with him before, he totally understood us, we chose him for that reason, he understands the band so much. So the days when we were crying or getting into little spats about the songs, he was the middle man, the father. So Charli came in for a few days to write with us, and would be in and out within three hours because she's super fast like that so it would be like a song in 5 minutes!
Georgia: So true.
In the Netflix Series about the start of Nasty Cherry it seemed some of the focus was on women role models in music and the importance of making people feel empowered to pick up an instrument, even if they hadn’t played before and to start writing. Nasty Cherry I'm sure are role models for many people out there because of this attitude, so to flip this on it’s head, who were your role models to get into music?
Georgia: For me in Nasty Cherry, it feels kind of cringe to say but my role models came from my bandmates. Debbie is amazing on keys and guitars. Chloe is obviously multi-talented with vocals and being able to produce too and Gabi had these insane ideas. It just pushed me to want to make shit with them. I think initially we were just really excited to all be making stuff together. And I think that it was the pull of us all having such different musical backgrounds and skill levels that felt exciting at first. I think sometimes when some people have tons of technical skill and other people don’t you end up finding these weird ways of working that I don’t think you would come to if you had all come to from the same place.
Gabi: I don’t think there are any direct inspirations, but i was obviously inspired by Joan Jett and the Spice Girls and all these other female bands. But exactly what Georgia said, whilst we were all filming and had this big drive from Charli and all of us wanting to make this work, I definitely agree with Georgia we were inspired by each other. [We got] all these questions from family and friends [about success], so we found comfort in the band and the girls.
Chloe: I think my Dad was a big influence when we started. When we started the band he encouraged me to dig in on the guitar way more than I would have for sure.

Was that from a personal experience?
Georgia: I think when we were all writing we were relating to those feelings of vulnerability when someone you like chooses someone else over you. The song isn’t the part where you are feeling down on yourself. The song is like when you are like 'fuck that!' When you have got to that stage of feeling fucked over. I think its cool seeing Gabi up their because it's like a vulnerable song at the same time being very strong feeling like very 'fuck it', you really get to see that.
I also think there aren't enough songs when women talk about these feelings of being pissed with that stuff, people write songs about being hurt or being in love or being over something but not many people write about that feeling of being pissed off with it.
Debbie: I think it would have totally brought a different vibe if had had more than one person in that shot for sure.
For What's The Deal is it based on a personal experience, it seemed lyrically so personal what is this track about? Or is this all of your experiences combined in the same way as Her Body?
Gabi: We all write together, me and Georgia write a story and Debbie and Chloe chime in and change some of the words and lyrics, we all want it to be something we relate to though. This track is about being over the moon about somebody, but they aren't giving you the time of day and you are still doing everything you can to get them back and have them in your life even though they treat you like shit because our love is so good. One of the inspirations for the track was Gwen Stefani’s No Doubt so it was a sort of homage to that.
Debbie: I think it's also about the vices that come about when you can’t stop thinking about someone as well.
Then, for All In My Head it seems to be dealing with past memories of a person, what do you think this track is about for you all?
Georgia: I think this is the saddest song we have ever written.
Gabi: And it came together really quickly, it just made sense.
Georgia: Yeah, it's about having someone who's your ride or die but this bitter sweet feeling, you feel like you are losing yourself or becoming an entity for another person. Its a bit like Buffalo '66 energy.
Gabi: It's almost like having this dream of this person but you wake up and nothing of it was really true and god that pit in the bottom of your stomach.
Georgia: I think these tracks work in so many different ways, the thing with us all writing lyrics together is that when we start a song there is a shared understanding of an emotion. If say.
Gabi wants to write about something personal, we will all impart our own feeling from similar experiences so we all feel equally connected to the songs but they might not feel the same things to us which is cool.
Yeah I guess that represents what also happens after a song is released with everyone, when I listen to the tracks I am definitely inputting my own histories within them and that's what makes music so special in general.
Georgia: Yes, I love hearing what people have read in our songs or have done to them - if people have broken up to our songs or got with someone, the lyrics and tracks mean something so different to them.
Yes, totally! Well thank you for talking to me. To finish up it seems the next stage will be playing these tracks to people, are you excited to play some shows and what is coming next for you all now the EP is out?
Debbie: I think getting in the same room is the next priority, to get touring!
Georgia: We have two EP’s we haven’t toured so we want to play these for people, a four hour show would be great (laughs) a big play through.
Chloe: Yeah definitely, thank you so much for having us! 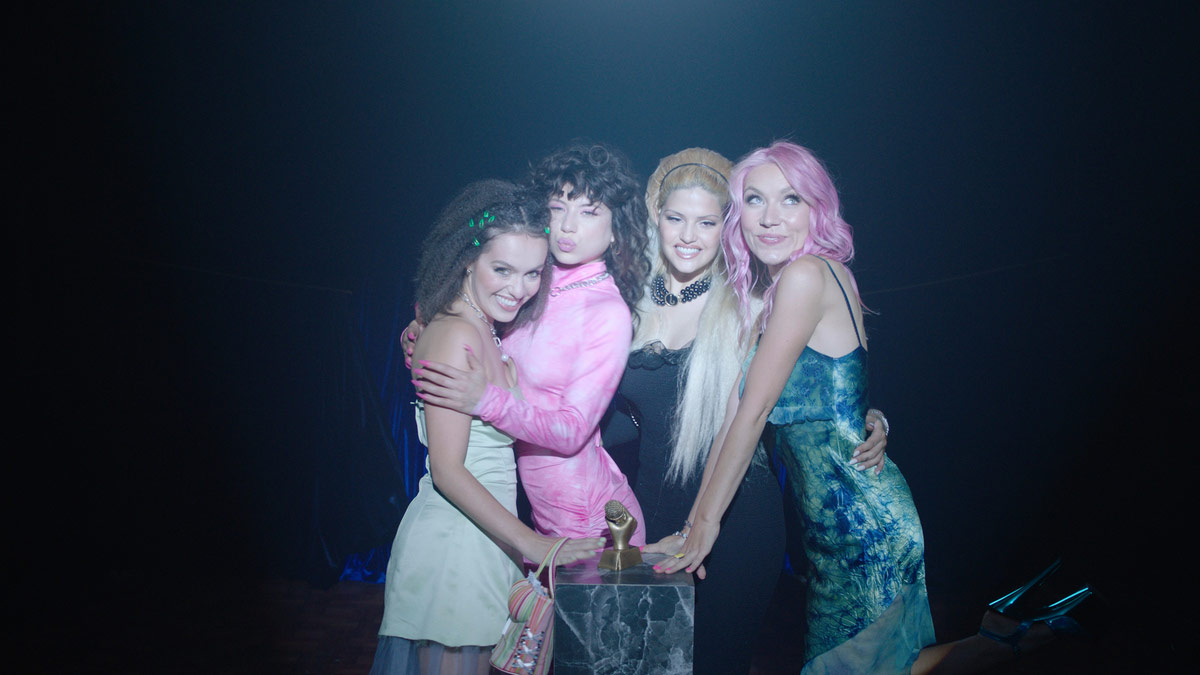