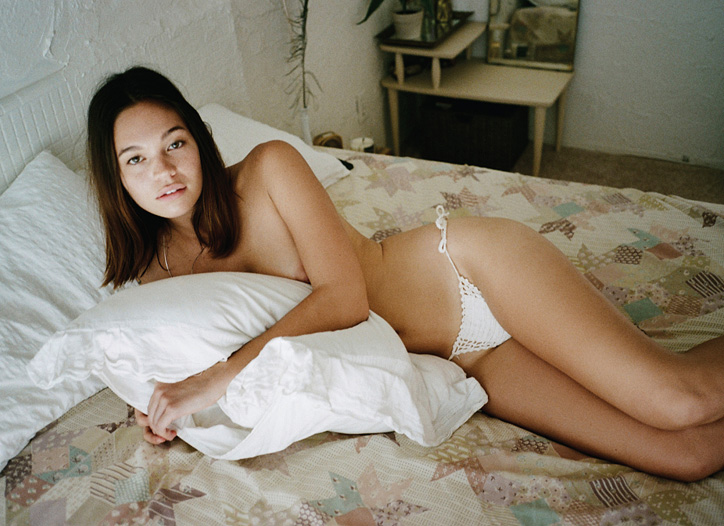 We are taught to never judge a book by its cover. But what when it comes to magazines? The first issue of Morena, founded by Barcelona-based art and design studio Córdova-Canillas (Diego Córdova and Martí Canillas) in co-operation with creative director Jan Rivera, delivers what its front page promises: 48 pages of a young woman who feels equally at ease with her own body and the gaze of the camera lens. A perfect 'morena' is desirable not because she knows her best angles and possesses the ability to make herself look good in a photo. She has the autonomy to be natural and spontaneous in an image and the freedom to suggest sexual availability with her eyes while simultaneously remaining a fantasy printed on coated paper in offset colour.

Hannah Guest, the pilot issue’s model, was shot in Beachwood Canyon, Los Angeles by photographer and filmmaker Henrik Purienne. The born South African’s youthful and nostalgic work can be seen anywhere from Maison Kitsuné and Costume National ads to his own publication Mirage – an aesthetically-outstanding bible of 1970s hedonism. For Morena, Purienne not only brings his 'good life' visuals; he also joins Guest for an intimate conversation in which the two detail their first encounter.

Perhaps by asking their model to reach out to the reader beyond sheer glances, Martí Canillas, Diego Córdova and Jan Rivera provide the most striking evidence that a 'morena' is not just defined by her appearance but by a certain "je ne sais quoi" behind it.

The title of your new publication Morena means brunette or tanned woman in English. What made you select this name? Will you exclusively portrait darker types of women?

Martí: Choosing a name for a project is always a difficult task. Testing names, it looked like we will never get it. Some seemed too cheesy, some very commercial, others overly designed… The name, as well as the content of what we seek in this publication, is to be honest with ourselves. After several attempts in English – English has it, always sounds good and is very international – we decided that the name of the publication had to be in Spanish because it is the language with which we communicate. It made sense. The same thing happened when we had to name our studio, we did not like any of the names we proposed. They were insincere and stupidly decorated. In the end we used our names: Cordova-Canillas. Back to the question. We made a list of words we frequently use when we want to emphasize something we like in a girl. Like the tan of her skin, the perfection of her tits or the curve of her ass. I remember it like really funny days. We wrote words like Tetoffens, Culamen, Mamelles, etc… Crazy and funny invented words we say with friends when we see a pretty girl. In answer to your second question, no, Morena's girl will not always be “morena”.
Diego: We've tried to invent a name that could describe a special kind of girl, always thinking in Spanish, it is really difficult to find a good name that could go out of the designers’ environment but fit in it at the same time.
Jan: 'morena' is how we qualify the good looking girls. Construction workers use it to call girls passing by. So that’s it, it’s something you think about one girl who will not stay forever but you would like to...

Hannah Guest was chosen to model for the first issue. How did the collaboration between her and photographer Henrik Purienne come about? I know they met through a mutual friend…

Martí: After a few conversations with Purienne, talking about what we wanted to convey with Morena and which feeling the girl had to have, he suggested Hannah. We thought… wow! She is amazing! She is what we want!
The collaboration between them, I guess, was completely natural because they have been friends for years – you can read this in the interview inside the publication – and taking pictures of his friends on holiday is one of Purienne’s hobbies.
Diego: Yes, it was very casual, when we were contacting Henrik, he told us a few things about her and he was very emphatic saying she is one of a kind.
JR: I think Purienne should be the guy who knows the prettiest girls in the world... I don't know exactly how it happened but I am so happy they met.

Since Hannah is not a random fashion model, I am assuming Morena is going to show real women rather than professionals who were booked on a job. This approach is very different to most other magazines on the market. For me, it’s what makes the project exciting and gives it a more refined feel. What qualities does your ideal “morena” have?

Martí: You're right; Hannah is not a random fashion model. For us, a 'morena' girl is a girl who has to wake desire, she has to be sexy, but as we say in Spanish “para gustos los colores” (there’s no accounting for taste); not all guys agree on the concept of what is pretty. Some like exotic girls with small breasts, others with big asses. That's why desire or beauty don't entirely lay in the physique of the 'morena' girl. I mean we don’t have an aesthetic prototype. We believe that her qualities have to be in her charm, in her attitude.
Diego: It is really difficult explaining it in English, I always remember a Mario Benedetti poem called “Ser o Estar”, but well… A 'morena' girl has to be elegant and ordinary at the same time.
Jan: She’s a girl. She’s sexy. She’s real. Kind of like a girl next door.

I find the images in the magazine very intimate. They attest to a good deal of time photographer and model spent together and resemble the type of photographs someone would take of their lover. The pictures might not convey a typically male gaze, but are they taken for men?

Martí Purienne is a master. He can take very intimate photos, very beautiful and really hot. So he can rouse the passion of a man and at the same time, be respected by girls because of the beauty of his his photos.
Diego: Of course, but more than for men or women or any sexual orientation, Morena is a publication for people who like girls, real girls. It is not another arty-erotic publication.
Jan: I think they are pretty pictures that tell a story in between lines. Someone will imagine they are lovers; others will just look at the smile and others... You know...

To me, it felt like the nudity was less about eroticism and more about the model’s desire to be free, independent and in charge of her body. Hannah looks very natural and almost innocent, something that suits the slightly nostalgic photography style.

Diego: We take nudity as an argument, so there is no acting like in fashion editorials, there is no other purpose behind these photographs. They are honest, sexual and believable. The nostalgia I think is part of Purienne’s stamp and everything in the issue is like it… It’s Purienne.
Jan: Exactly. Hannah appears natural and innocent, but she is definitely hot.

South African photographer Henrik Purienne shot the first issue. I’ve loved his work for years and think his own publication Mirage is one of the most outstanding titles in the creative fields. What made him the right man for the job?

Martí: For us, it was really cool to make our first Morena with Purienne. He had everything we wanted, incredible work and he’s internationally renowned.
Diego: Purienne is one in a million. We just love his work, his taste and, of course, his castings. Just search for him in Google images.

Each issue of Morena will feature an interview or a dialogue between photographer and model. The reader is given a unique insight into their relationship which makes the photos appear in an even more personal light. How did you develop this concept?

Martí: I previously mentioned that we wanted to be honest. All photographs reflect situations of everyday life, with no make-up and no requisites. We like the idea of publishing a close conversation between the model and the photographer because the reader can thus interpret the publication from another viewpoint. In the current issue they were friends, nobody knows what will happen in the following one.
Diego: Morena is an intimate work; it explores nudity and the relationship between the photographer and the model. On the other hand, Purienne is also a filmmaker so he develops an experience rather than a shooting. He is a visual story teller.
Jan: We wanted to tell the story from behind the scenes. Something to reinforce that this beauty is real.

Morena is really quite special in creating an experience that is shared by everyone who reads it. Do you believe the fast moving world of magazines could generally do with becoming more relatable?

Diego: Trying to be honest with the audience, in our case an audience that is looking for a sex publication.

I think of Morena as an object more than a magazine. It’s something to collect and display on a coffee table. Since print media are threatened by internet-based publications, it seems this is a smart move…

Martí: Diego and I are graphic designers, we are especially in love with the printed matter. We have designed a lot of printed magazines but almost always work in someone else’s studio. One of our goals at the time we decided to found our studio was to work in magazines, commercial or self-initiated work. Bit by bit we are achieving it. To quote some projects, we are the designers of FUET magazine and Morena is our first self-initiated project, we have another in mind of a different nature.
Diego: Well, on the one hand it is a coffee table publication with an artistic value given by the subject ‘monograph', it is the work of an artist, in this case it is part of Purienne’s lifestyle. On the other hand, Morena is about good taste and sexual openness; it could speak very highly of you.
Jan: I am a huge magazine fan and collector. We really love paper, the smell, the touch... I think there is something erotic about magazines.

Finally, I don’t believe you aim for Morena to become a publication of mass appeal. But what does the future hold for the title creatively?

Martí: We are not focused on becoming a mass publication. We solely want to enjoy our work and with this first Morena, we achieved that! I think that these kinds of projects are made for this, to be enjoyed. And when you enjoy it yourself, you can notice it in people’s response.
Diego: Personally, I don't have anything against mass publications. Creatively, we will continue exploring this format; I mean the performative aspect of Morena: the relations between photographer/model, nudity/elegance and design/content
Jan: We would like to collaborate with many photographers but we don't have a schedule or timing for the publication. We just want it to be true, nice and sexy. 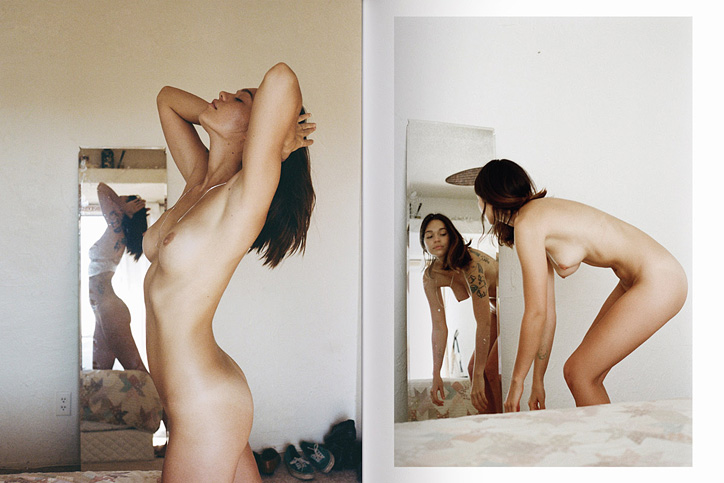 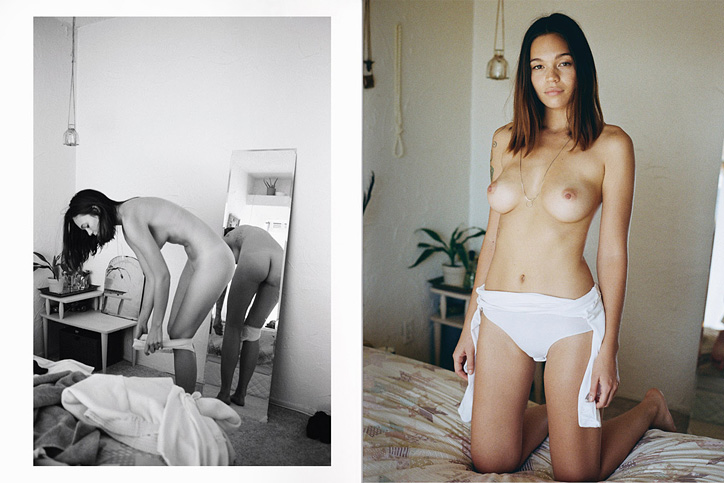 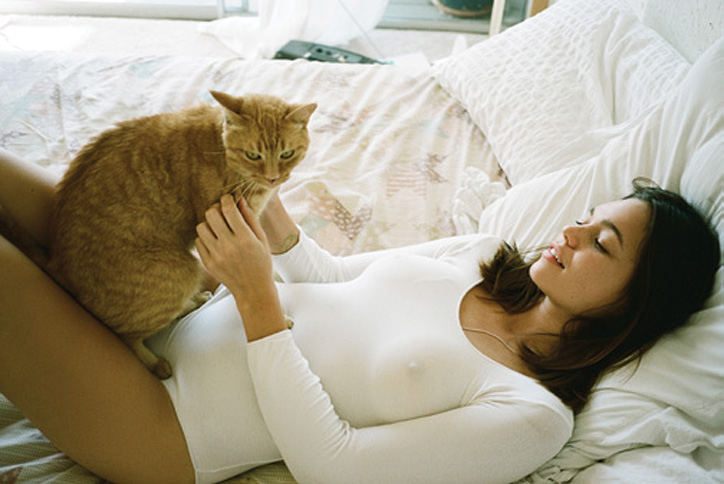 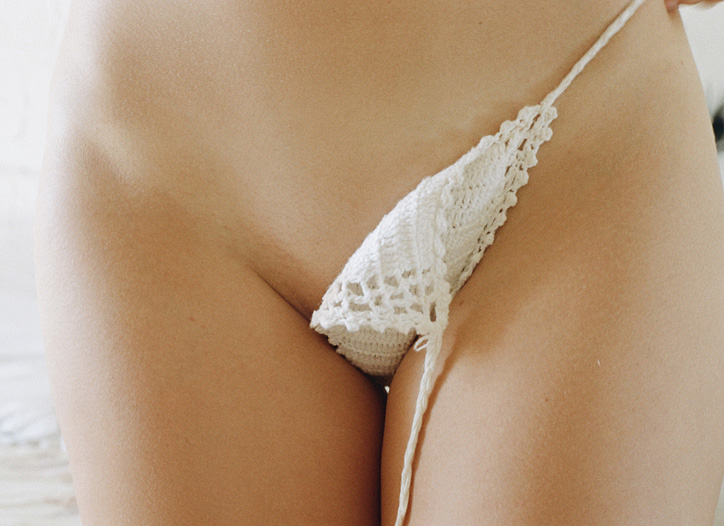