Functionality is the key to success 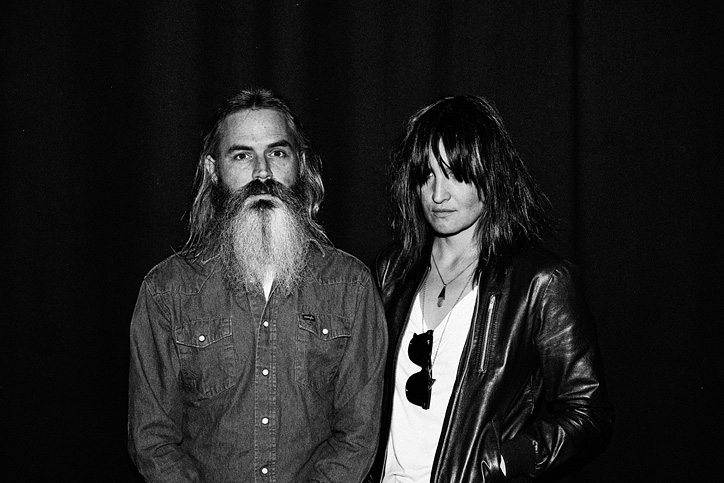 American drone-based psychedelic band Moon Duo is in the midst of the world conquest thanks to their third studio album, Shadow Of The Sun. The rad duo are Sanae Yamada (on keyboards) and Erik Ripley Johnson –if anyone in the house is arriving late, he is a former member of the San Francisco outfit Wooden Shjips–, who is a humble guy full of wisdom. He likes to keep things simple, whilst walking his path to reach a place at next America’s Top 100 Guitarists…

Apart from including real drums in the studio, are there any other noteworthy differences between this record and the previous ones?

That’s the big one, the drums. We started out in the studio recording live-drums before recording home. We still record at home, but half of this record we did it the other way around.

Could you be so kind to tell us a bit about that process?

We bring material already recorded into the studio, and if there are things needed to be fixed we re-record it, but for this album we started in the studio for half of the songs at least. We can work on our basement; we just need to get a little bit better equipment. We just bought a good microphone now (laughs). We are not professional engineers or have the budget to buy lots of high profile gear, but enough to do a lot of the overdubs at home. It’s just about having some more freedom, you can experiment and the clock isn’t ticking. Sometimes that pressure can be good, but for us works better to build the songs from the beat and take the rest from there.

Why did you decide to do the final mix in Berlin with Jonas Verwijnen from Kaiku Studios?

It seemed like a good idea, just doing it in a different location, sort of getting out of our normal zone. We have friends there and we had a place to stay, and Kaiku had been recommended to us. For this album, we first went to San Francisco and did a lot of recording there with Phil Manley from Trans Am. We did a mix with him; but it just wasn’t the way we wanted it. You know, I find it pretty intense. You are all day in the studio, you are tired and go through the mixing process, take a break and come back and listen to it and decide if you are happy with what you did. A lot of times we were like “oh, that was great, the best thing we’ve ever done, the greatest mix in the history of recorded music”, and then the next day you hear it and “oh, this is terrible”. (Laughs).

Nowadays radio stations can also go viral. For instance, your performance at KEXP acquired a great response. How do you see this as an artist?

It is interesting because when you do it you have a camera in your face and it’s really rushed. KEXP is great, a lot of people see that and listen to it, but this is live, you have an hour to set up, a quick sound check, then they are doing an interview with you while you are standing there with your guitar and then you play your song… It’s like 12:00 in the afternoon, maybe you are hangover or haven't slept enough, you are on tour... Hopefully what you do is good. It is a great opportunity, but it’s way too much pressure, and I don't like pressure (laughs). We can barely handle the studio when there’s anybody there (laughs). But it’s great that people mention it. KEXP are great people!

Would you say this new record sounds more garage-oriented, like The Fuzztones or The Pandoras, rather than that minimal Suicide thing?

Yeah, no one’s ever said that (laughs). That’s great.

I mean, perhaps this record is more melodic?

Yeah, there are more melodic songs; we try to get a different approach on each record, not vastly different, but for us it’s about different textures.

Besides, now you are playing with a drummer, what is the gain from playing as a duo sound-wise?

It changes the way we play, for sure. It is like a conversation of one person vs. another person around the table, like a dinner table, that’s the best analogy for me. It’s one-on-one. With Wooden Shijps is four people and that’s vastly different because everyone is having a conversation at the same time and you can throw things out and see what comes back, you are leaning with a lot of people and it’s much more comfortable, you can relax in a live performance. But when it’s only two people, you both are carrying so much weight, everything has to be held up, it’s a juggling, you can’t relax in a way. Having a drummer gives a little bit of freedom, he can be always there like a drum-machine, but he can also change with you, so it gives you an option.

I’m obsessed with trying to get it smaller and lighter all the time because we travel so much and it is so heavy, but there are certain pedals that I’ve never been able to replace. I keep trying different things, but I use an MXR Distortion Plus, which I’ve had forever, a Teese Real McCoy RMC Wah, a Clone Centaur overdrive pedal, which is way too big but nothing else sounds like it. And then I have a Phaser from Earthquake Devices. For a while I used an MXR Phase 100, one of my favorites. Sometimes I add delay and a looper.

Do you play Airline guitars exclusively?

Yeah, usually. With the Shjips I have played with a Gibson SG, but the problem is the neck is so fragile, I just worry about breaking it, plus I like the sound of Airlines. I like it because it has three picks ups and the bigsby, I always play guitar with tremolo bigsby. They actually made a custom model for me.

Yeah, the Ripley model, it’s pretty cool (laughs). They made it just this year. It’s the same model but it has a master tone control built in it, so you can give yourself a little boost.

Obviously, you had to told them how to produce it.

Yeah, I’ve been in contact with them. But the other two Airlines I use, I have I bought them myself; I wanted to have a black one and a white one. They are new; I don’t want to bother about vintage stuff, which is pretty expensive. I’m into functionality, not touring with things that are too precious. I mean, I wouldn’t care if someone stole it… I don’t want a $20,000 guitar. I’d rather have stuff that works well and I don’t have to worry about.

Tell us about your video Animal with Richie Jackson. Sorry I’m not too familiar with him, is he some sort of famous skater from the 70’s?

Oh, no, he looks like he’s from the 70’s but he is from Australia and lives in L.A. He calls himself a psychedelic skater but he does very interesting tricks incorporating trees or bushes and nature in a way instead of cement, nature city things.

Is there any link between skating and Moon Duo, further than the video?

I used to skate but not anymore. I’ll kill myself if I get a skateboard (laughs). I got into SST Records when I was a kid; I got into their sampler album with the Meat Puppets on it, such an eclectic label, it turned me on into all this kind of music.

At last, but not least, please namedrop some new bands you currently like.

Nest Egg from Nashville, North Carolina, they’re one of the best bands I’ve seen in a long time. Also a band called Crosss from Toronto, fantastic.