Taking up an in between space 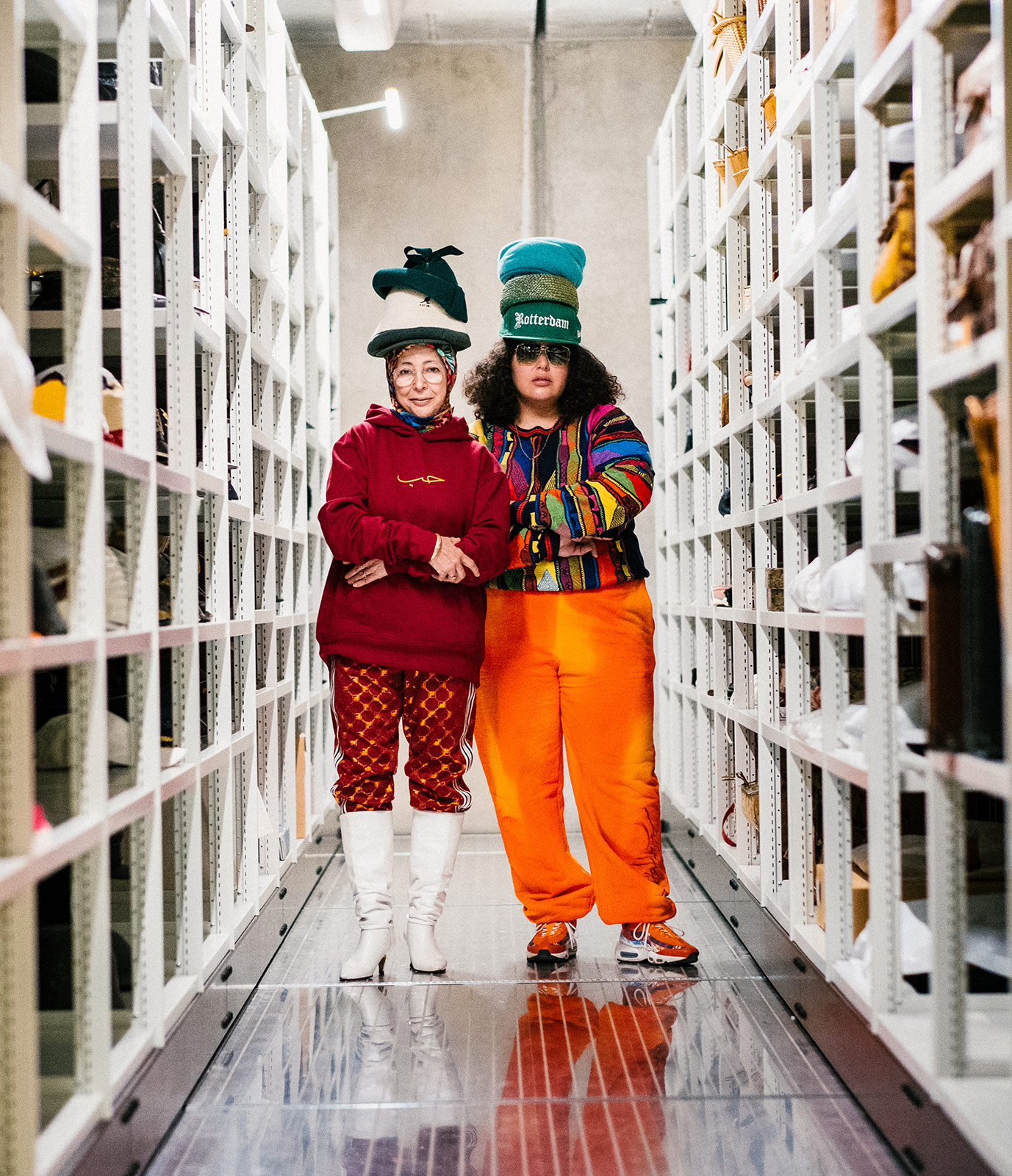 When the boundless world of social media and the Internet does not represent you, it’s time to take matters into your own hands. This is exactly what Meryem Slimani has done, and continues to do, alongside the unconditional support of her mother Najate Leklye. Growing up Moroccan in a predominantly white space, Meryem found solace in the culture of hip-hop that she engaged with through music videos and television. In contrast to the majority of influencers today, Slimani adopts a vulnerable approach on her Instagram profile, which is evocative of her art - photography - and brings optimism and genuinity to a platform overly consumed with the superficial, and damaging, elements of the Internet. As she navigates her voice, her culture and motherhood, she remains graceful and down to earth, this is precisely what makes her so engaging and relatable to her tens of thousands supporters.
Today we welcome perhaps one of the most remarkable figures on Instagram today, Meryem Slimani, a Moroccan woman who grew up living in the Netherlands with her fashionista mother, Najate Leklye. Meryem, how are you doing today?
Thank you so much for the kind words, I appreciate it a lot. I am doing well, schools are opened again in Holland so that gives me some space to breathe and time to work on things instead of being in mama mode 24/7.
First off, yourself and your mother exude optimism and authenticity on a platform that is so often consumed by the hottest trends rather than the notions of self-expression and comfort. The Instagram model trend has pervaded women’s lives over the past few years, and especially women of colour’s lives, who rarely see themselves depicted within the commotion of unrealistic beauty standards; this can be incredibly damaging for young girls who grow up surrounded by these harmful expectations. Could you tell us a bit about your own experiences with social media that led to your creative and genuine approach to fashion photography?
I always used social media as an emotional outlet, so to speak I sort of became a professional oversharer over time (laughs) and always saw Instagram as a way to share my life in all its forms, good and bad instead of only a filtered highlight reel. I can only be myself so that is how I have always approached social media too, it would be way too taxing for me to have some separate Instagram persona.
At the moment you have over fifty-eight thousand supporters on your Instagram page. How long has your profile been dedicated to images of your mother, Najate? Was she always open to the idea of being photographed?
She started popping up on my feed every now and then somewhere in 2016/2017, people really loved those images of us together and that was what triggered me into thinking wait maybe this could be a thing? By the end of 2018 I took the first photo of her that was also styled by me, it was for a collaboration with a Rotterdam based brand Susan Bijl that we both love a lot and the response was overwhelming. It didn’t take long after that before she took over my entire feed. She has always been my biggest supporter so when I asked her if she wanted to pose for me instead of the impromptu snapshots we would take she said yes immediately. 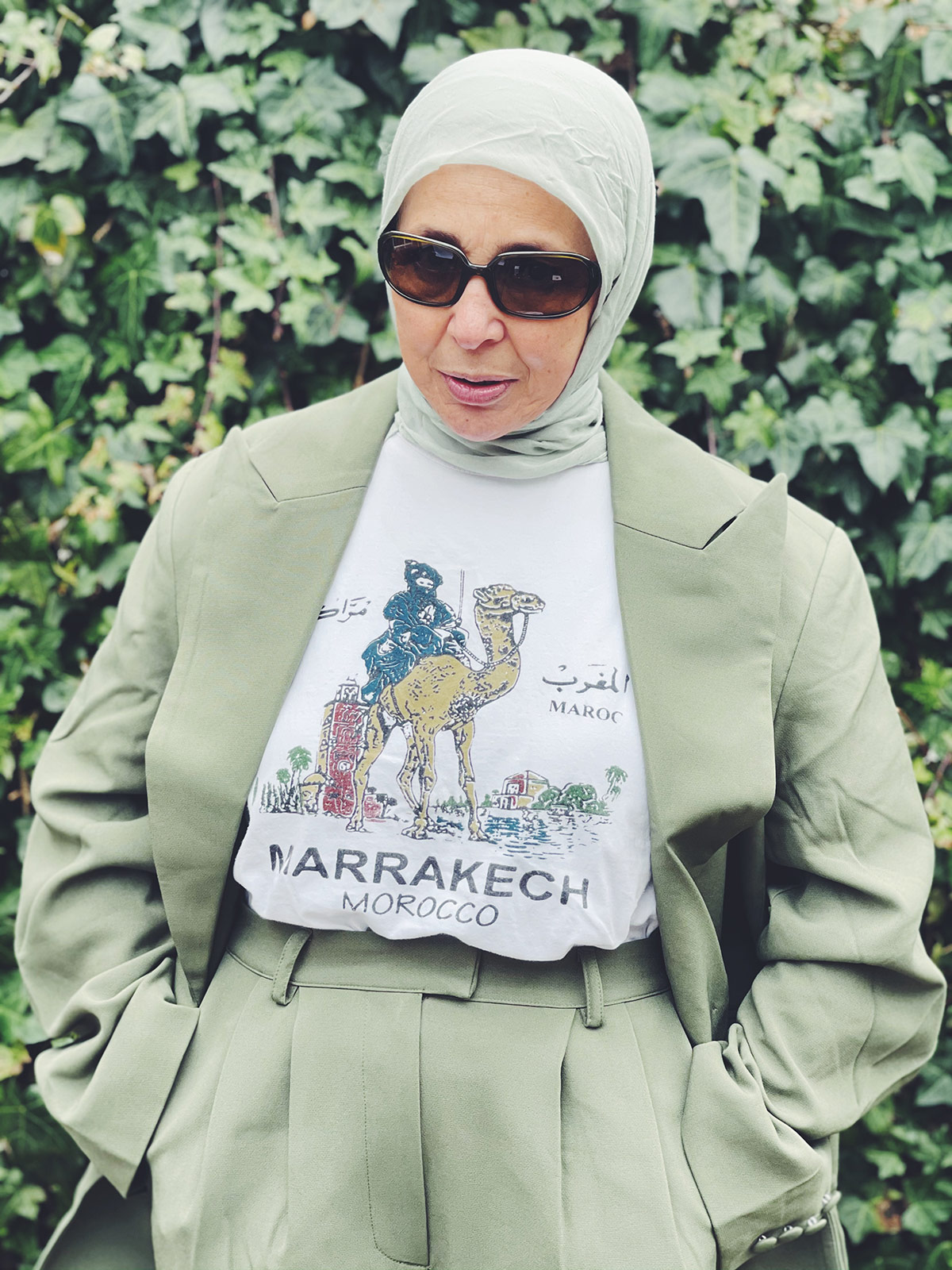 How has having a child of your own amplified your mother-daughter connection? What did it teach you about being a mother to your son, Nori, who is also occasionally featured on your profile?
To be honest I think without motherhood I would have never taken this turn of creativity with my mother. I was going through a difficult depression and PTSD for several years which only got worse after I gave birth because a lot of childhood trauma came up, especially the fact that I wasn’t raised by my parents the first 4 years of my life. There were a lot of unresolved issues between us, for her the guilt of leaving her child behind with her parents and for me the emotional disconnection. As a new mother I could not imagine leaving my son behind on a different continent and only seeing him once a year. But through photography and seeing her through my lens I slowly started to see the humanity in my mother. As a child you think your parents are perfect but now I realise they are just humans trying to do the best they can do with the circumstances they are in. My mother came to Holland not knowing anyone and when she gave birth to me and her maternity leave was over she did not trust me with a daycare or other type of childcare so she could work during the day as a teacher. In her mind sending me back to Morocco to her parents would be the safest option. It sometimes is still a sore issue between us, especially when it comes to parenting Nori because I will feel like well it’s easy for you to say this when you weren’t even there when I was that age so how would you know better now? But I see mostly how much she loves him and in a way is making up for the time lost with me through him and that has helped me to process a lot.
Your profile is evidently a very intimate portrait of your life and your heart-warming relationship with your mother. Though it seems that this began as somewhat of a healing process for you both, is there a part of you that wishes to inspire more broadly? For instance, change people’s outlook on fashion and how they use surface-level platforms like Instagram?
I think in a way we are already doing that by showing that style does not have to change through age, religion nor size. Society or media (and its beauty standards) don’t have to dictate for us anymore how we need to look or live our lives, we can do that for ourselves perfectly fine. And by having my mother front and center, a 69 year old immigrant who is visibly muslim, defies all those stereotypes towards any type of person that doesn’t fit the mould or doesn’t feel seen within the mainstream. And I truly hope we inspire people to be proud of themselves, where they come from and just take up the space they deserve.
Needless to say, nobody else is doing it like you two! Have you ever received photos from other young women and their mothers which you have inspired? More generally, have you seen a difference in how women are expressing themselves on these platforms since you began to deviate away from the superficial norms of streetwear modelling?
I love it when young women send me pictures via dm to show that they or their mother are wearing nike hijabs or when they say in comments this is gonna be me in 40 years. I think my mother and her style gives women a feeling of freedom that you can be modest and still be expressive and unapologetic. 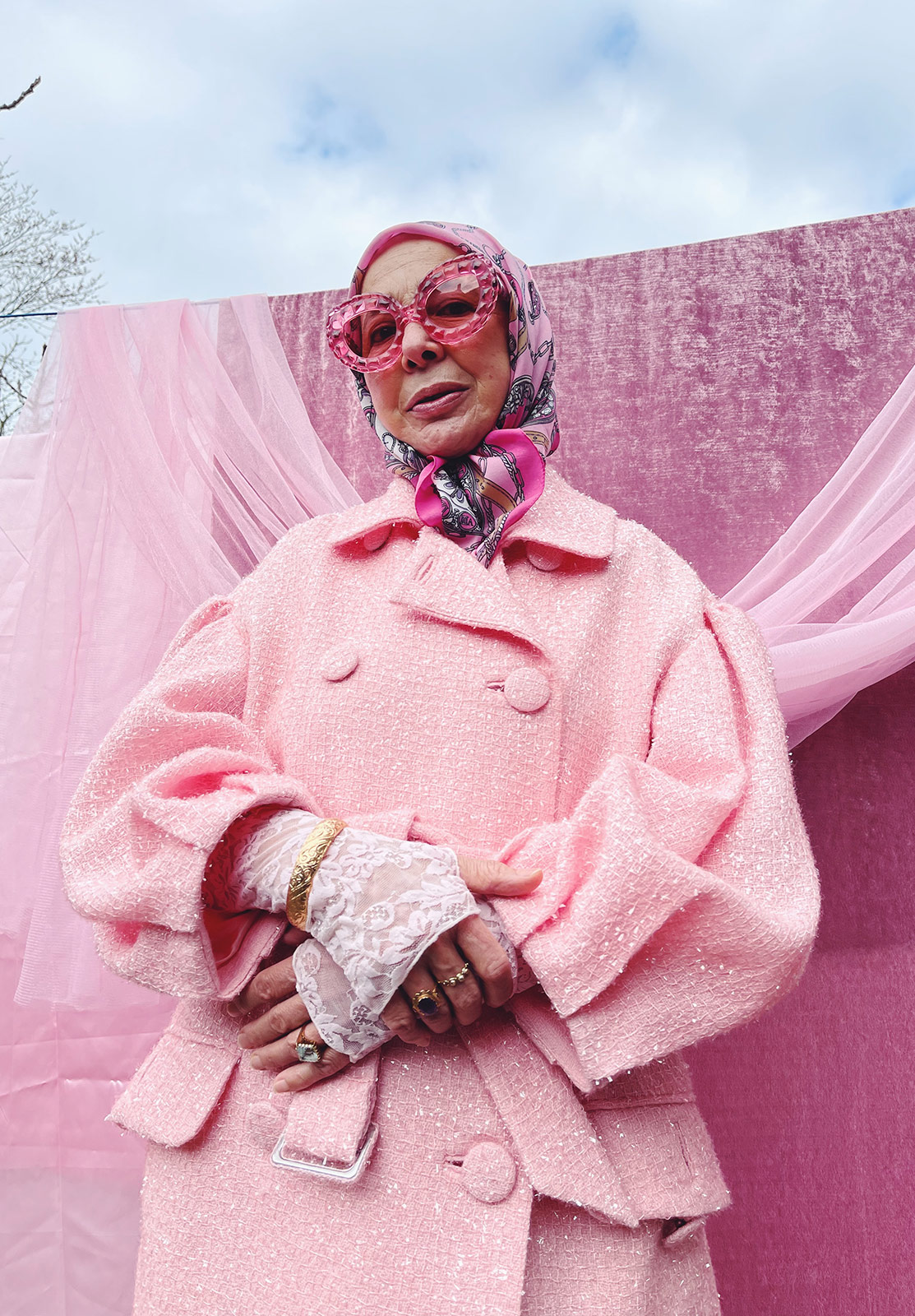 You recently debuted your Umi (My Mother) exhibition at Hama Gallery, which will be on view in Amsterdam until January 30, 2022. How did it feel to have your culturally embracive work on display?
As a full circle moment. I have been part of other exhibits in museums but this is my first gallery exhibit, my first solo and also the first time people are able to buy my work. For a long time I was very scared of putting myself out there and seeing my work framed this way made it really real, even though it’s been around for quite some time now. To see how proud visitors were to see themselves and parts of our culture represented in such a beautiful space was a truly magical experience.
Umi as you describe on Hama Gallery is an illustration of life and light in your homeland, Morocco, wherein your mother, Najate, is adorned in traditional clothing that create a kaleidoscope of colour and culture. Could you tell us more about the two inspirations behind Umi, Morocco and hip-hop, and how you found the balance to convey both?
It came naturally to me, being born and raised in Morocco the culture is ingrained into my soul so that is always a part of my existence. And growing up in the 80s/90s in a small town in Holland with mostly white people in my direct environment and in the media the only way I could see something of myself was in hip hop music. I was far from Black but I was even farther from white so I could relate a lot more to Missy Elliot or TLC instead of Britney Spears or other pop stars. It was the height of MTV days filled with amazing music videos and programs like yo MTV raps and the grind. I used to have drawers filled with tape recordings of all the shows and video clips that I would play endlessly and dance to whenever I was allowed to watch TV. As an immigrant kid you grow up between cultures which can be hard because there is always a feeling of not belonging. But with hip hop culture it felt so much more relatable than what I could find on Dutch television and in school etc. So those two factors have always been a big part of my life and (sub)consciously are present in whatever I do.
Do you plan on exhibiting your art in Morocco in the near future?
I would love that insha’allah (god willing). 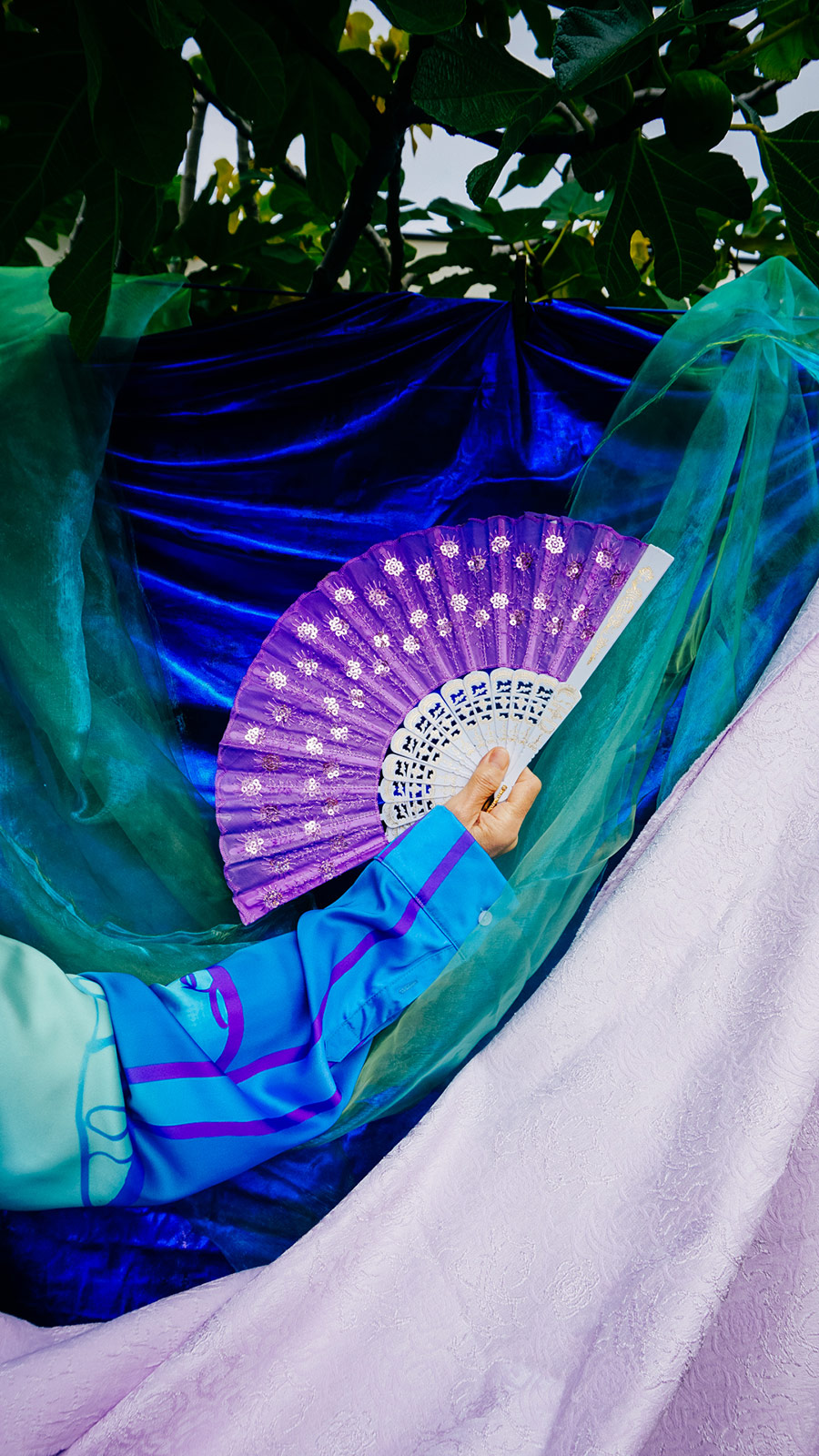 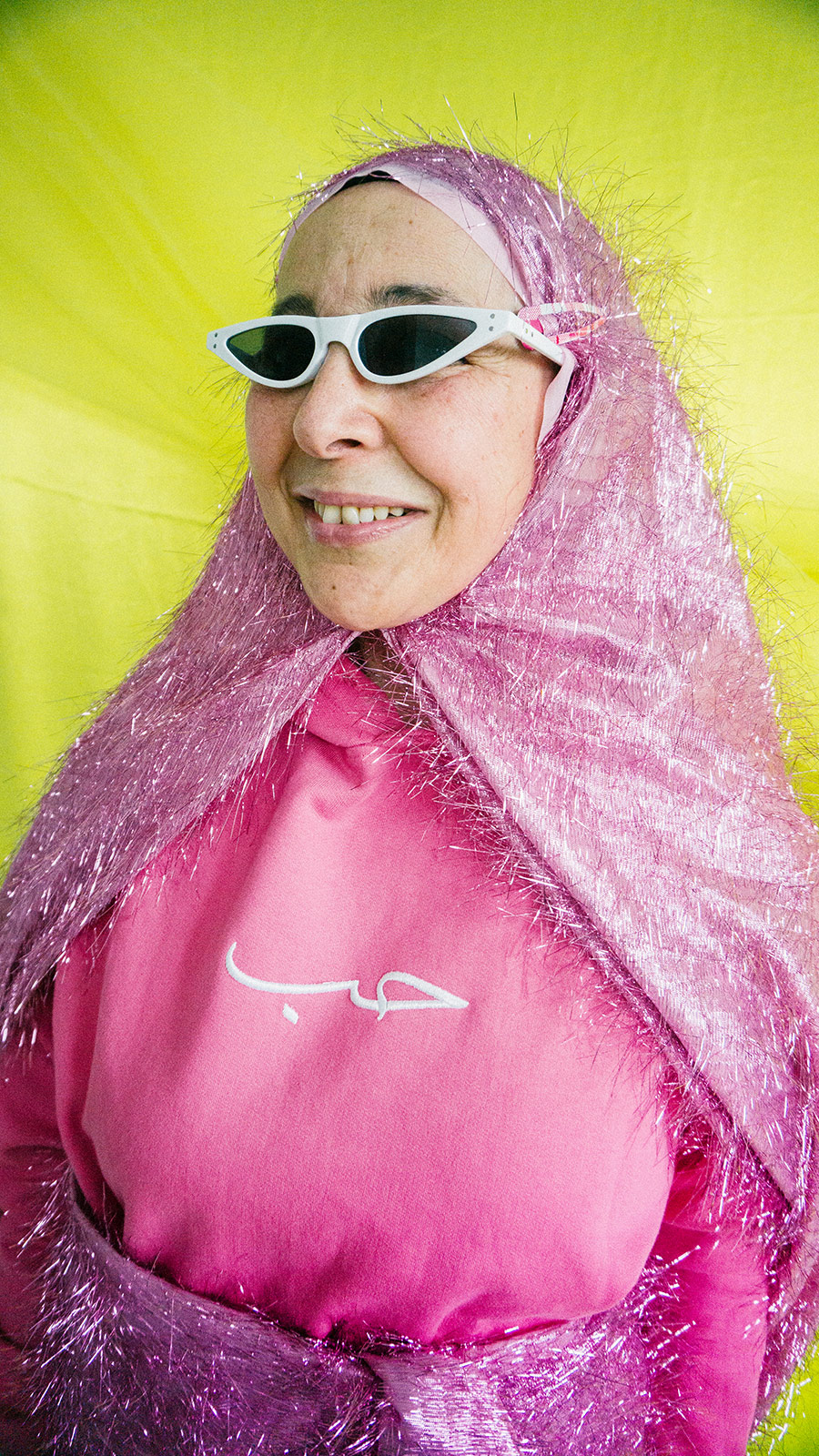 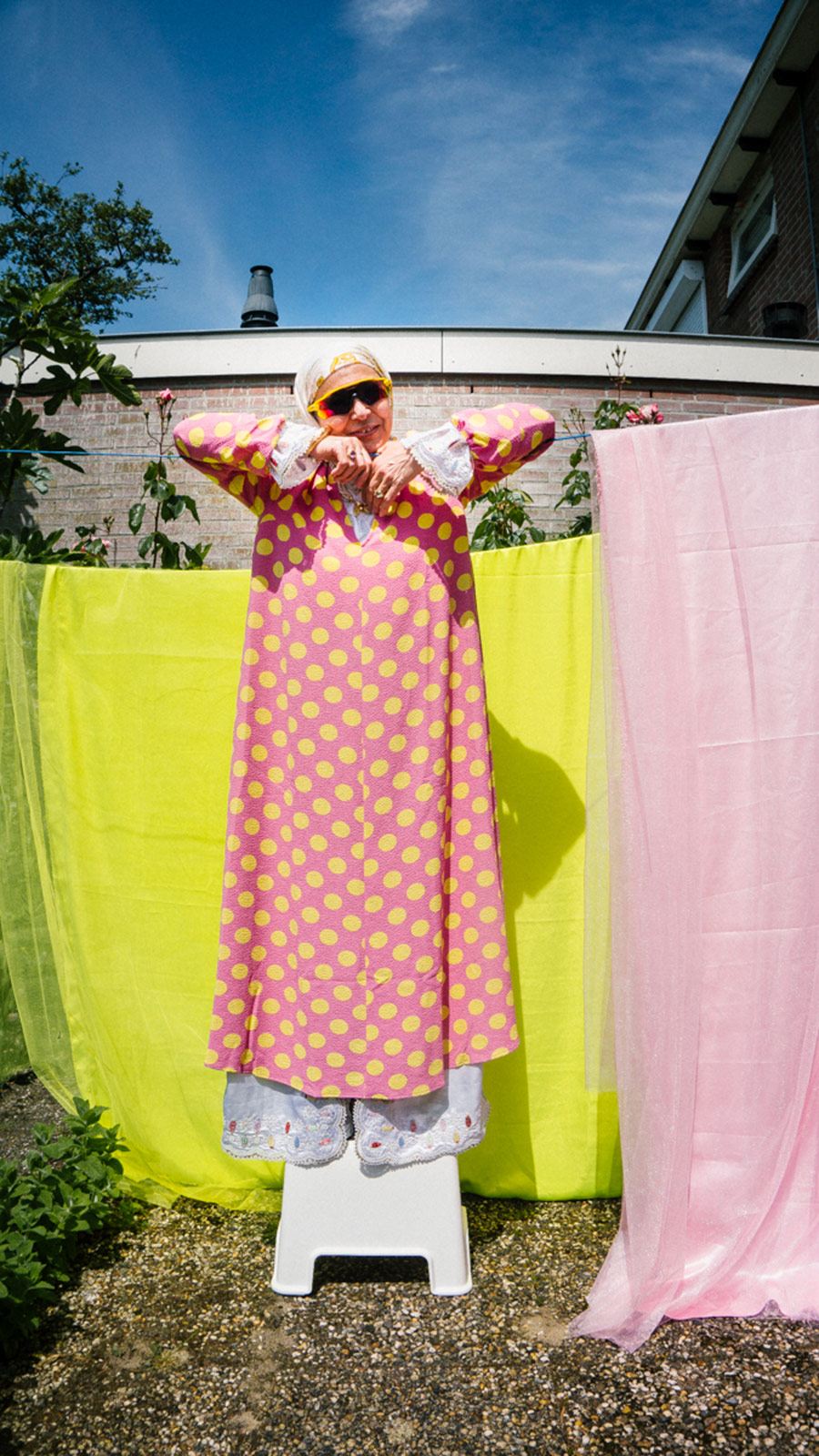 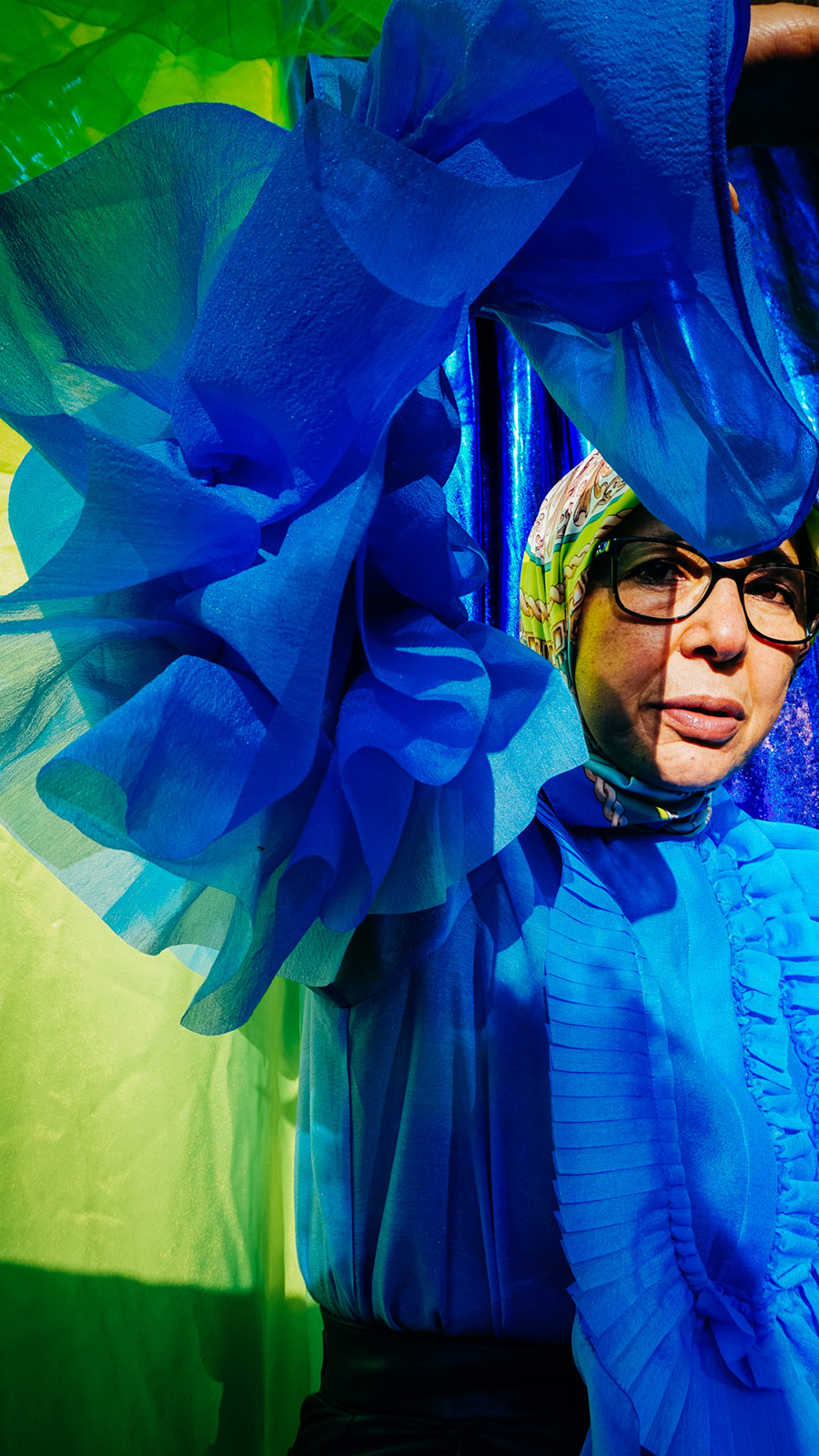 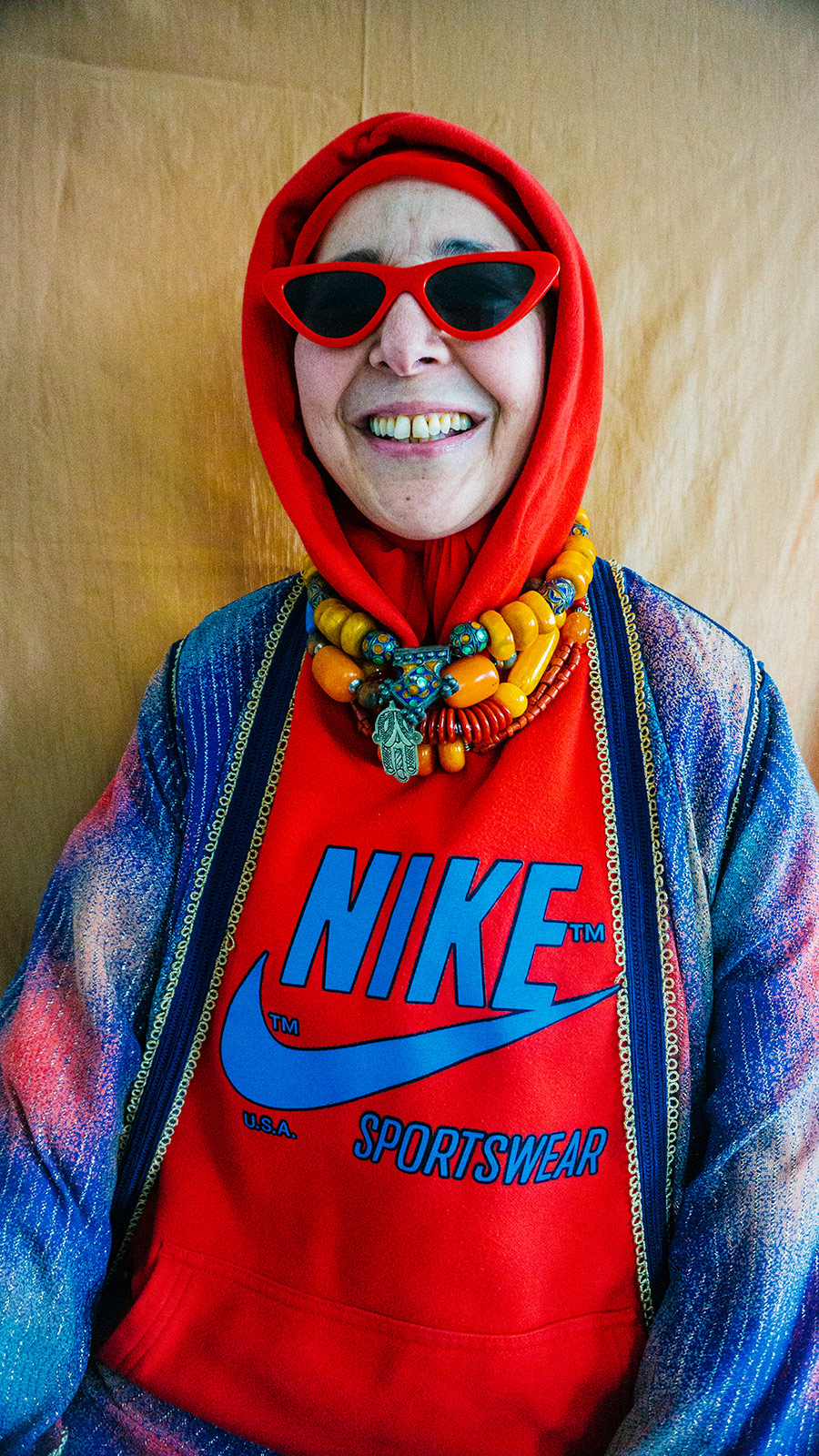 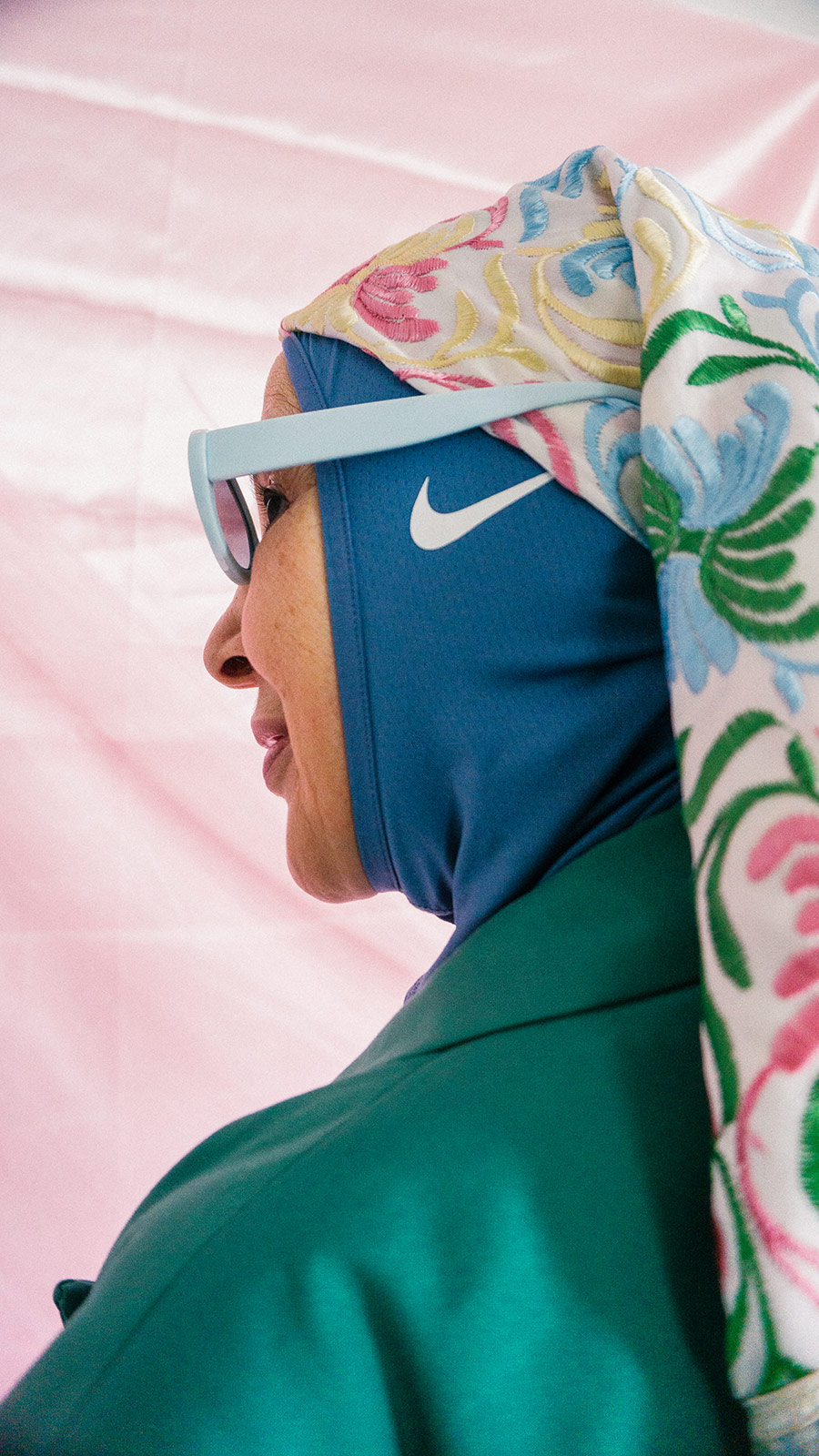