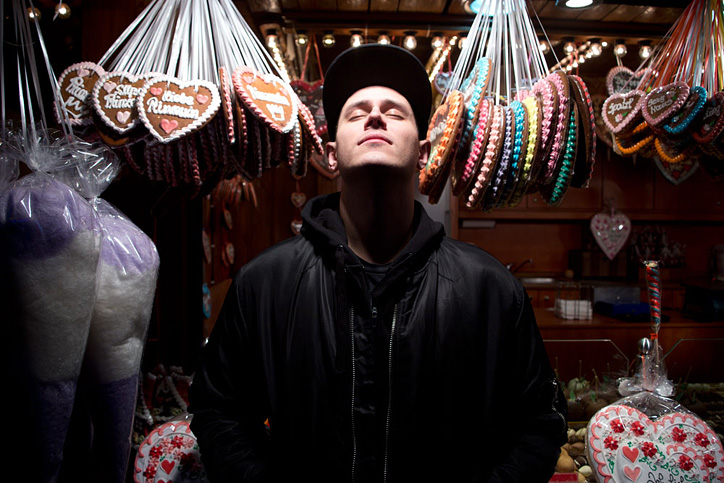 Matt Lambert is a filmmaker, photographer and citizen of the world. He was born in Los Angeles, feels at home in New York, travels frequently to his studio in London and resides in Berlin. Among his work are short films of bi-curious youths, as well as portraits of cam boys and escorts. His aim is to illustrate the modern notions of sexuality in contemporary culture, on a considerably more honest and primal level. “Some of my recent work has used elements of gay pornography, but not as an element to shock people”, he says. As we sit down to talk, it becomes clear that his work is about so much more than the overly sexualized presence that it initially strikes you with.

You’ve been successfully working on music videos, fashion short films and documentaries in the previous cities you’ve lived in. How was it to start working in Berlin?

When I first came to Berlin, I had this idea that I was going to be able to develop the projects that I wanted to develop, but that's not what Berlin did for me. Instead, the city allowed me to develop myself, my interests and to be more honest with myself and the people around me. To become more refined in terms of what I’m interested in and the types of things that interest me. Once I figured that out the projects started flowing quite naturally.

How does Berlin differ from your previous residences?

The city made me reignite my fascination with humanity and with life. It's been a journey of relationships and connections with humans, where one path lead to the next. The greater process comes from the people. In London and NYC, things were very streamlined and there were structures to follow, whereas in Berlin it's been more organic to connect with people via photography. I could meet someone that I find interesting without knowing why, but knowing that I want to get to know them. I would organize a photo shoot, which is really just an opportunity to hang out and get a feel for the person, with a bit of distance created by the camera. That practice led to a lot of ideas for film projects. Then the process becomes a very fluid thing that blurs the boundaries between my personal life, relationships and interests. It happens a lot that the people I’ve worked with become my friends. I used to compartmentalize this so much. In LA, London and NYC it was work and play, whereas here I’m kind of living in the work that I'm doing. That's because Berlin doesn't have these definitions of “this is what you are” and “this is how you need to act in that role.” I guess I'm a filmmaker, but I'm also a lot into photography these days and other visual and storytelling mediums. I'm less definable now, which I find interesting. It's like stripping down the layers of what you're supposed to be and what you're supposed to make. It's a freedom that Berlin is giving me.

How do these personal changes reflect in your work?

Before I always thought about the outcome. Like, I want to make films like that, how do I that? Now I don't always think about what films I want to make immediately, it's more about what subject I'm interested in and how I can portray that. The story comes first, the video and the style of it later. I ask myself, “What's the most honest way to portray this person in a way that it's not just a snapshot of them?” It's all about having an initial interest in people and their stories. Allowing for really unexpected relationships to form, meeting compelling people with stories, and to go down unknown paths.

Kids have always been confused and stuck between contrasting notions of themselves, now more than ever. Especially for kids in Berlin the definition who I am, what I am and what social categories I fit into is more and more blurry, which feels like a move toward evolution via fragmentation. I did a very film called Fuck Machines four years ago which was very contradictory toward this view. It deals with the idea of degradation of self and that intimacy is dead as a result of pornography and digital communication. The ways that we express ourselves have become reenactments of the things we consumed digitally, in a very negative approach.

A good example of your vision on virtual communication is the documentary you made about cam boy Kevin, a Los Angeles-based teenager who performs live sex online in his free time. Tell us more about that.

Kevin is a cam model who has had relationships that existed only online. Sometimes, he wouldn't interact with people for weeks. That was no less real to him, maybe it was even more real in some ways because it's happening in this abstract space. At times, this series romanticizes the idea of cybersex and cyber dating. It's a new sense that we're developing. Virtual communication is real. A perspective could be that it's intellectually more tangible in its abstraction than reality.

How have people received your recent work?

Some people love it, and a few have found it shocking. The last thing I wanted to do is shock people. I want to treat the recent documentary work  as honest, authentic and intimate stories. This is just the lives of these characters and there's nothing shocking about them at all. There's maybe even something romantic about it. It’s good, however, to read the feedback online and to realize that people actually see your work. It can be quite insular in Berlin, so it's motivating to know you're not just making work for yourself sometimes.