Spirits from the deep 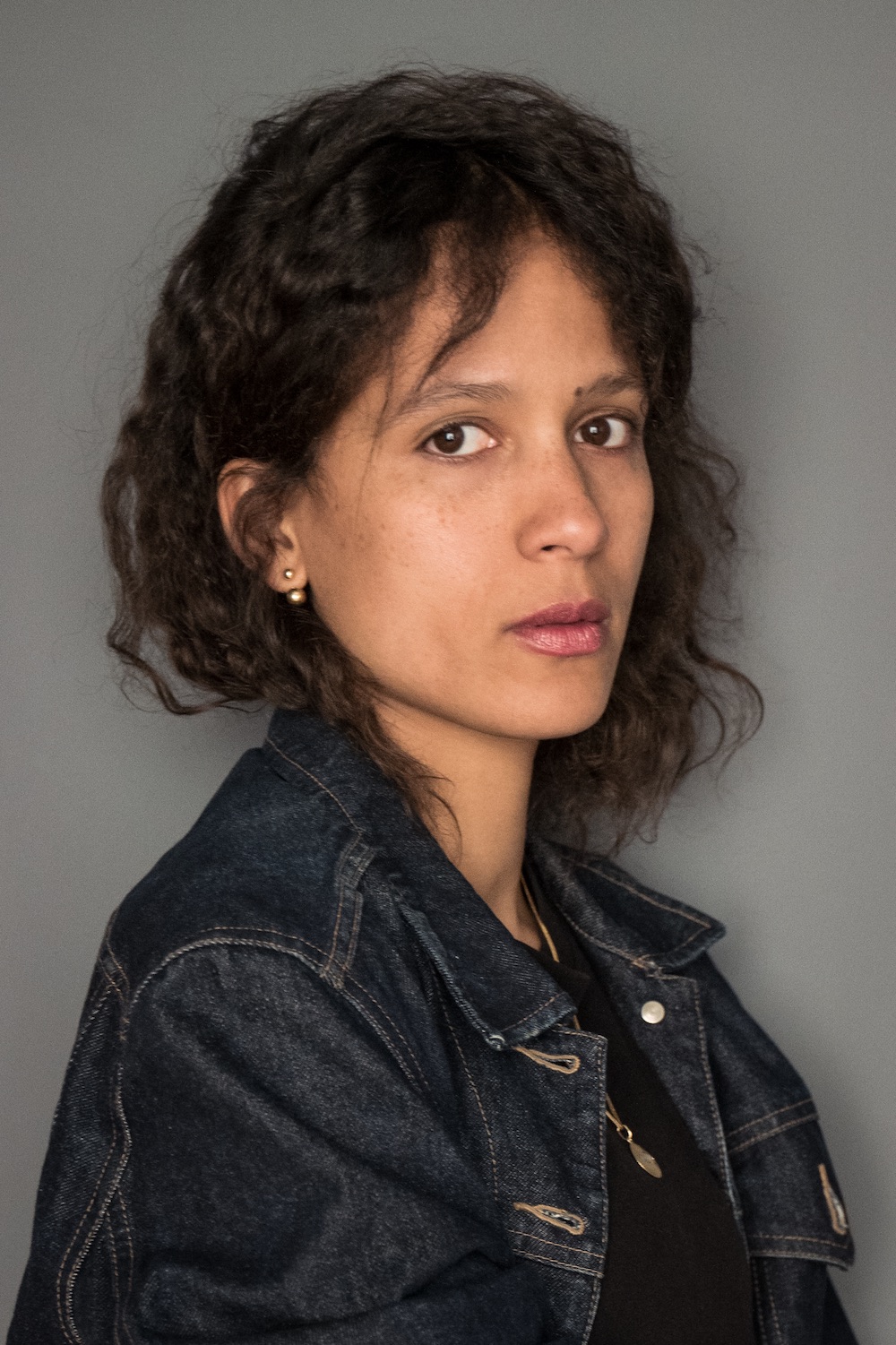 French-Senegalese film director Mati Diop is the first black woman to screen at the competitive section of Cannes Film Festival. Furthermore, her first feature film, Atlantics (2019), won the Grand Prix this year – among several other remarkable awards internationally, which is unusual taking into account it’s the first time she’s done a full-length. However, Diop has conquered the hearts of both audiences and juries with a story about migration, love, and tragedy – all seen from a female point of view and set in a dystopian future in Senegal.
After a long tour through film festivals, which has taken Atlantics from Toronto to Cannes and Stockholm, Netflix will stream the movie worldwide starting November 29. In addition to that, Senegal has selected it as the country’s official entry for the Best International Feature Film category at the upcoming Academy Awards. The full-length film is based on her previous short film, Atlantiques (2009), which tackled Africa’s migration issue first-hand.

However, Diop’s first feature film gives the first idea a twist by combining the documentary narrative – the socio-political commentary, this time, from the perspective of the woman who stays in the land – with a rather poetic and mystical approach tossing elements like voodoo, ghosts, love and tragedy into it. At the 30th Stockholm International Film Festival, we sat together to depict her winner stint, the tension between the fictional and non-fictional, and the importance for a novel filmmaker to achieve such recognition with a first feature. 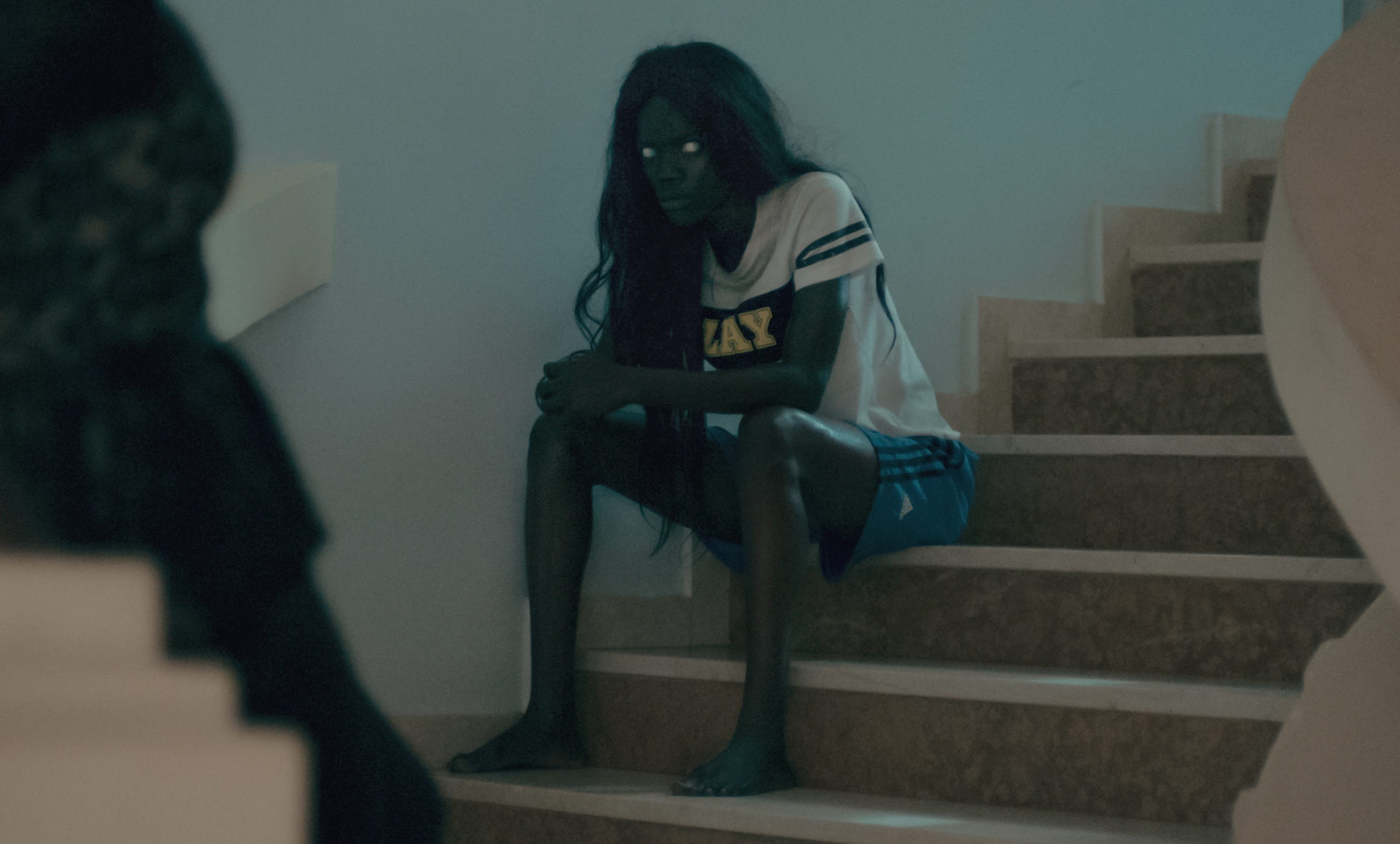 First of all, congratulations on Atlantics, I enjoyed it very much! I am very curious to know how did you develop your approach to filmmaking and your cinematic language since it felt so incredibly fully formed. Usually, it takes many films to achieve such thing.
I think we tend to put more recognition in feature films, and in general, I tend to consider short films as an exercise or as a way to achieve a feature. I guess it depends on the director’s cinematography, but in all the short films I’ve directed – four shorts and one medium-length so far –, I was very much involved in terms of writing, directing, and editing. They all came from a very special place, so I was as engaged with them as I’ve been with my first feature film.
I’d say that cinema is a bit like literature: you have long stories and short stories, but the short ones aren’t less important; they’re just another format. Atlantics is indeed my first feature but it’s mostly my sixth film. Short films also take a lot of work – sometimes, it’s even more difficult –, but I think these years of hard work have paid off.
As a matter of fact, Atlantics won the Cannes Grand Prix this year and also the Jury Grand Prize at the Toronto International Film Festival.
And many others too…
What does this mean to you?
It’s very strong; it’s a lot. I analyse this as a result of my previous work. Once again, this is not coming out of the blue. I’ve been working making films for ten years, and this movie for me is a very big achievement as a filmmaker and encourages me a lot. For me, it is extremely important to feel recognized and understood, so I’m very grateful for that. 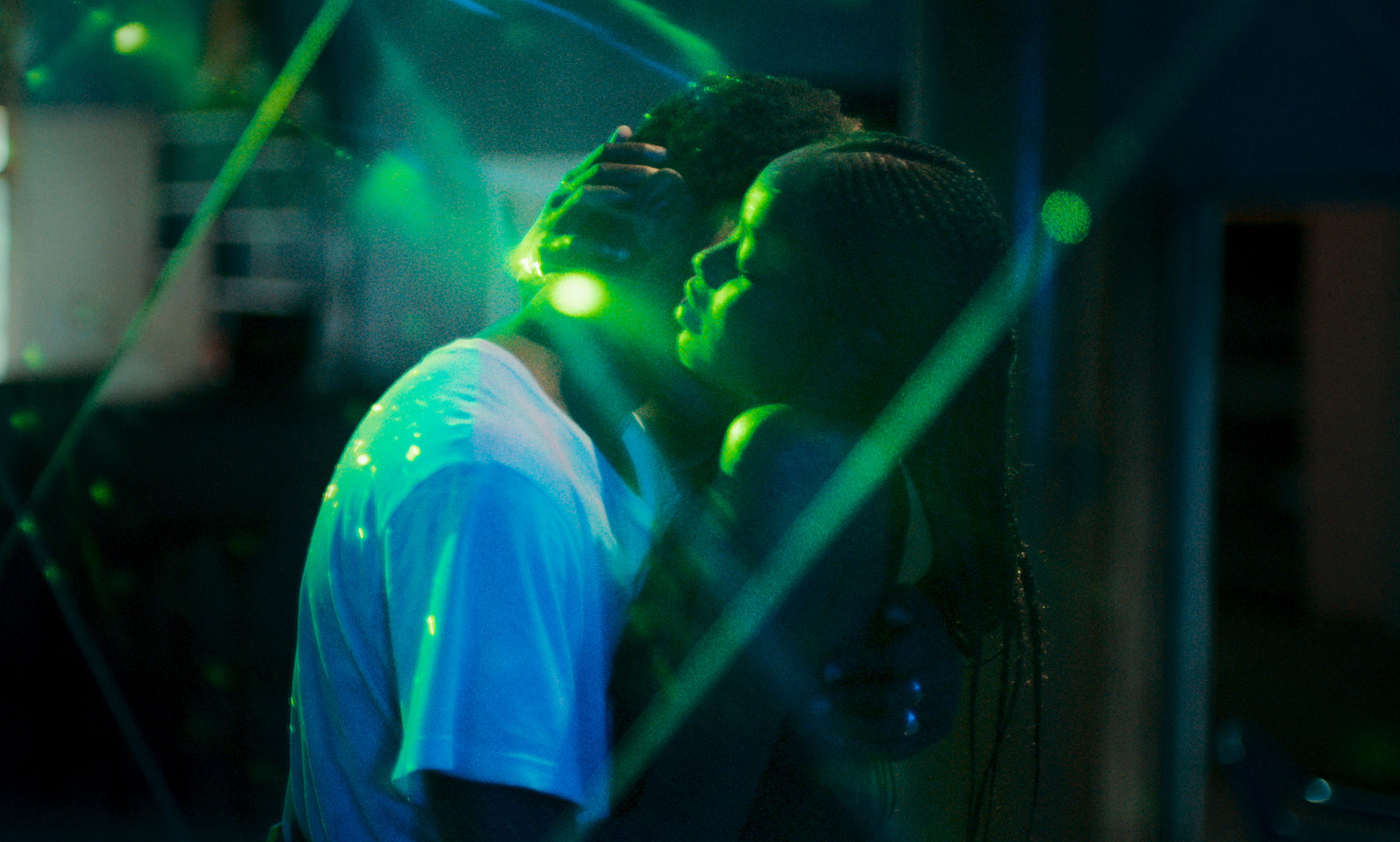 I believe this will help in the development of your career.
Exactly! But I also want to consider the bigger picture. I feel that my movie participating in the competitive section as well as winning the Grand Prix happened for a reason that has mainly to do with my previous work as well as the work my team; however, it is also something that couldn’t have happened ten years ago. Because selecting the first feature film of a woman in the main section… It was impossible ten years ago.
This is thanks to a more collective progress – from collectives fighting for race issues, feminism, and more presence and representation in the film industry. All of this, together with my work, have made it possible for my film to be here. On another hand, the Grand Prix is something else because the jury is formed mostly by filmmakers, so I think it has had more to do with their sensibilities as filmmakers rather than today’s social and political context.
There is something very interesting. As an actress, you worked in Antonio Campos’ feature film Simon Killer (2012). I’ve met both Campos and Brady Corbet, who curiously is another actor who decided to pursue a career as a film director. Is there any kind of ‘Simon Killer virus’ here which transforms actors into film directors? What happened?
We are in the same situation but in reverse: Brady is an actor who started to make films, and I am a director who was proposed to be an actress.
Ah, I see!
I was very young, obviously. When I first acted in Claire Denis’ 35 Rhums in 2008, I was already a baby filmmaker about to shot my second short film. She and I wrote that short together – and actually, this is the reason I met Antonio Campos. He proposed me the role and I felt very close to their way of experiencing and making films. I was interested in the role, but mostly, I was interested in their relationship with cinema and in the fact that we were from the same generation. I think they were as much interested in my actress side as in the fact that I was also making films. 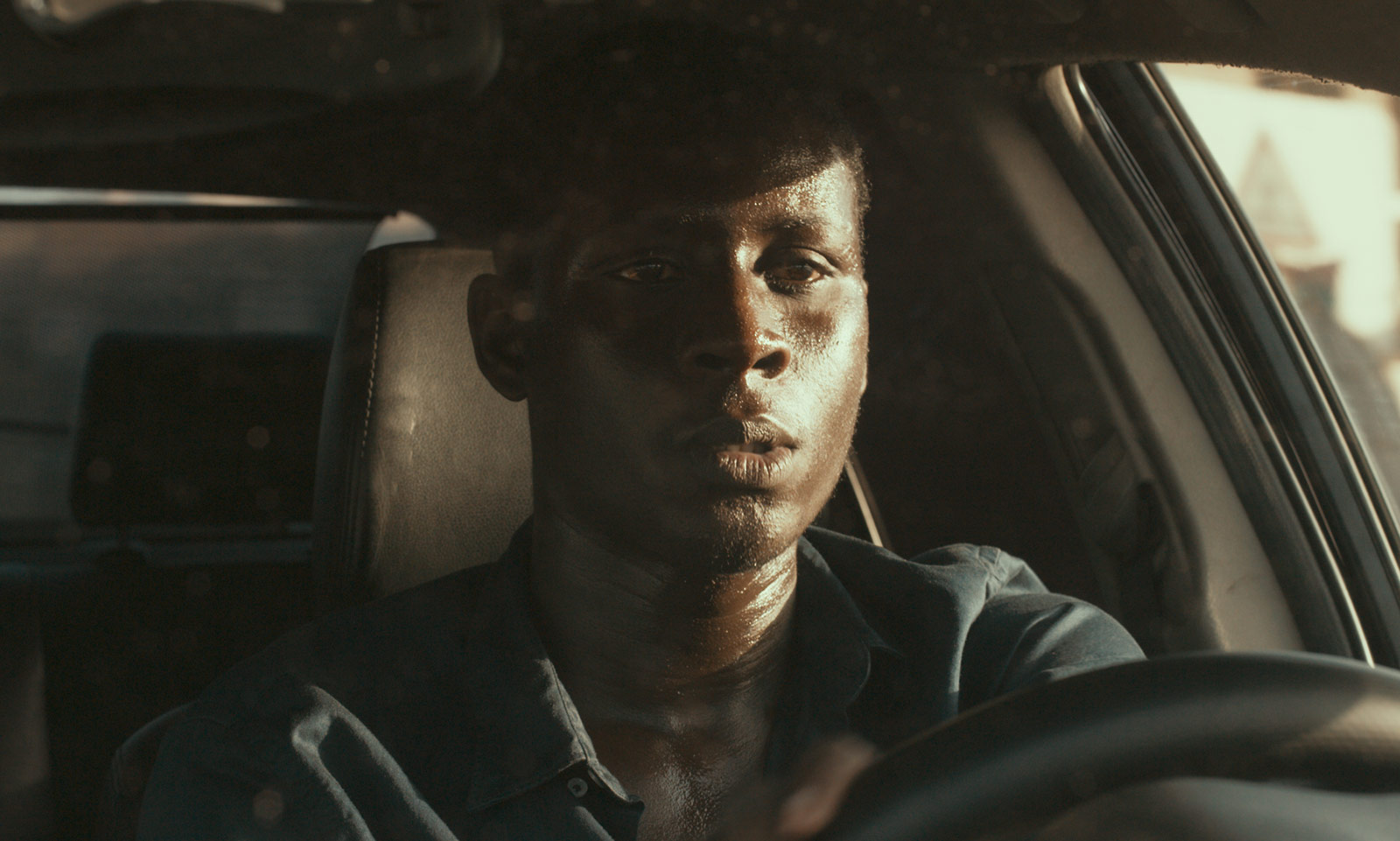 Actually, speaking of Corbet, he told me all about the economic struggle and time-consuming process of looking for sponsors to pull off a first feature film. In your case, was it a big battle to make Atlantics a reality?
Things work very differently for American filmmakers and French directors. The systems aren’t similar at all; for example, it’s extremely hard for independent cinema to survive in the United States. In France, on the other hand, we’re very lucky to have public money destined to filmmaking via subsidies. So my biggest battle wasn’t to get the money but to get the script done. That’s actually my mission, my work as writer, author and filmmaker. It took me about three years and a half to get this script done, and once it was ready, we didn’t have difficulties finding the money because it was more about convincing the institutions. And we got some funds and TV money. It went very fast because they liked the story.
Atlantics is based upon your previous work Atlantiques, a short film you made in 2009. Very briefly, how was that adaptation process? What was your vision for the feature film after your experience making the short film?
If you want a brief answer, the short film is told from the point of view of a man who has crossed the ocean – from Senegal to the Canary Islands (Spain) –, someone who has experienced it. On the other hand, the feature film is about the woman who experiences the migration but by staying in Senegal.
Apart from the storytelling, did filming the short story first help in terms of design production and more technical nuances?
Yes, it did. It’s hard to give you more details without extending myself, but it definitely helped. 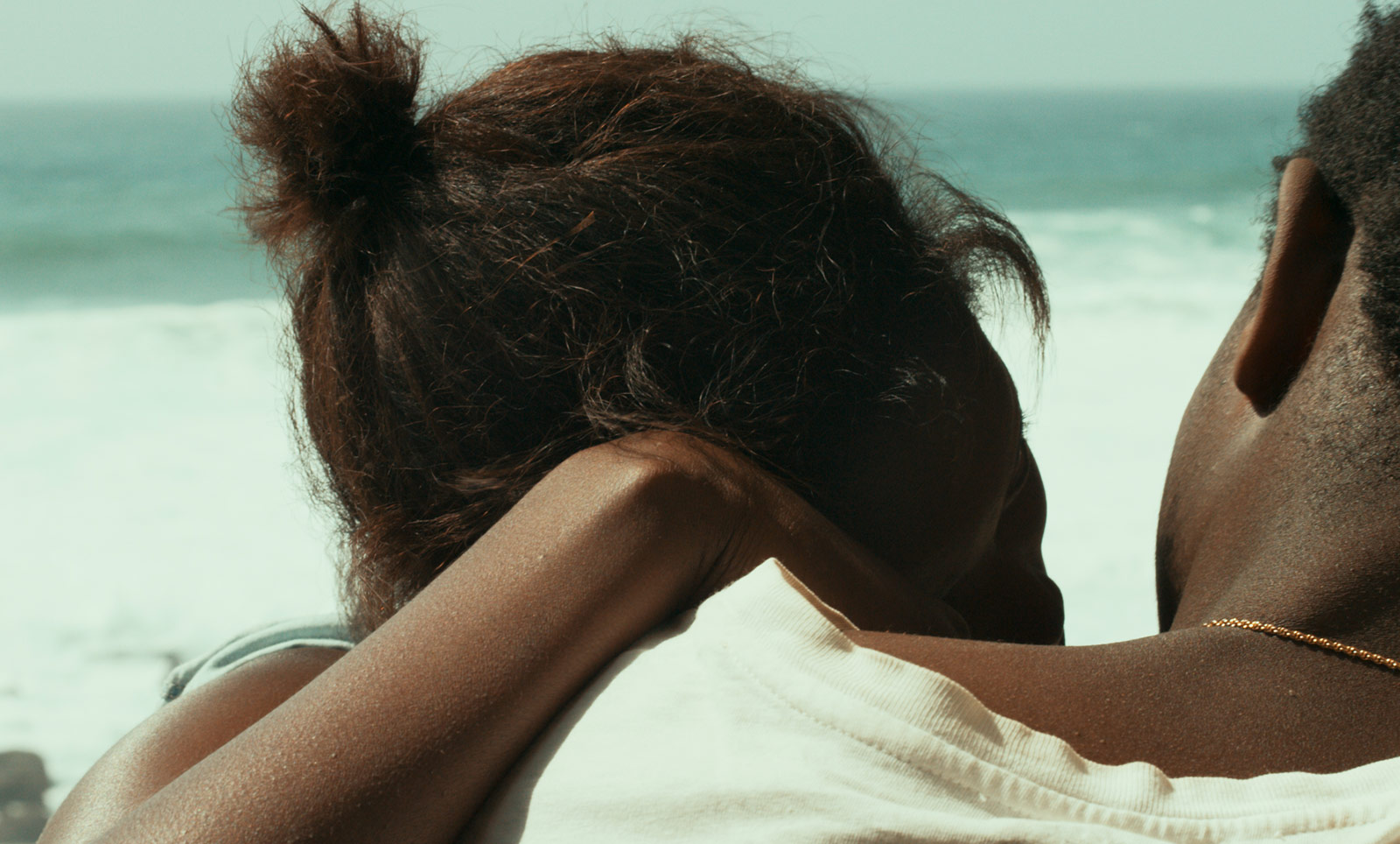 You have family in Senegal, has this affected the way you approach the story?
Of course! I am half from Senegal, so I have a link to the place. It isn’t a ‘tourist film’, it’s a film I shot in Dakar because I’m half from there.
Apart from your comment on social and political issues, there is a lot of poetry and mysticism in the film – for example, the landscape shots of the sun on the ocean’s horizon or the spirits. How do you balance this contrast between the social and political comment and the poetic and mystic tone?
You’re pointing out the tension between the content and the form. There’s a situation but many ways to approach it. Migration can be approached differently than in a condescending way like most TV reportages do. What happens in my film is that I tackle the issue with cinematic and poetic tools, I treat it with a different lens and approach because, in Africa, you have to do it with another sensibility. Unfortunately, we’re not used to seeing this. A certain way of editing can make you think that the topic is limited to mass media and a documentary style, but this film proves that belief wrong. People have the right to exist for fiction. 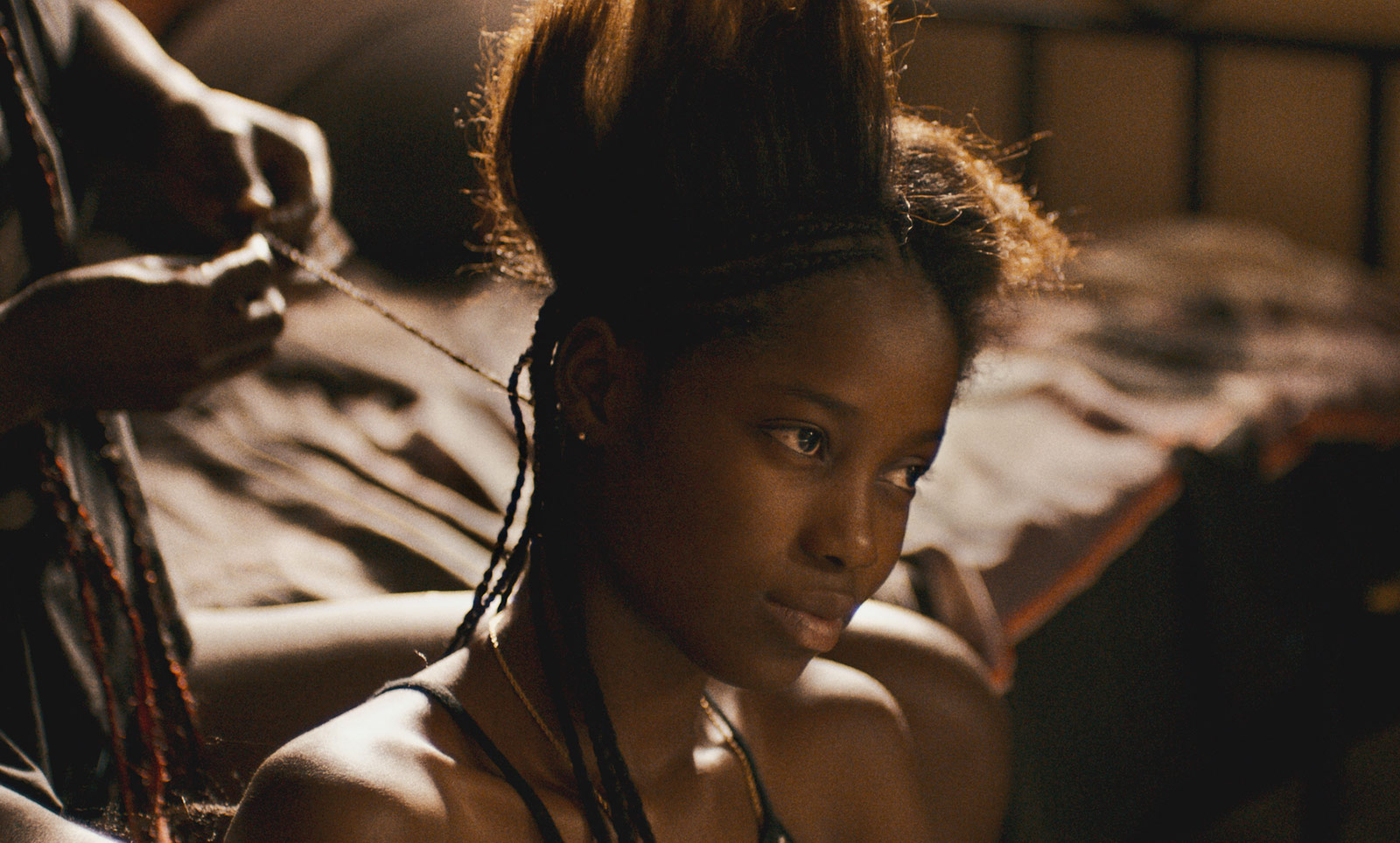 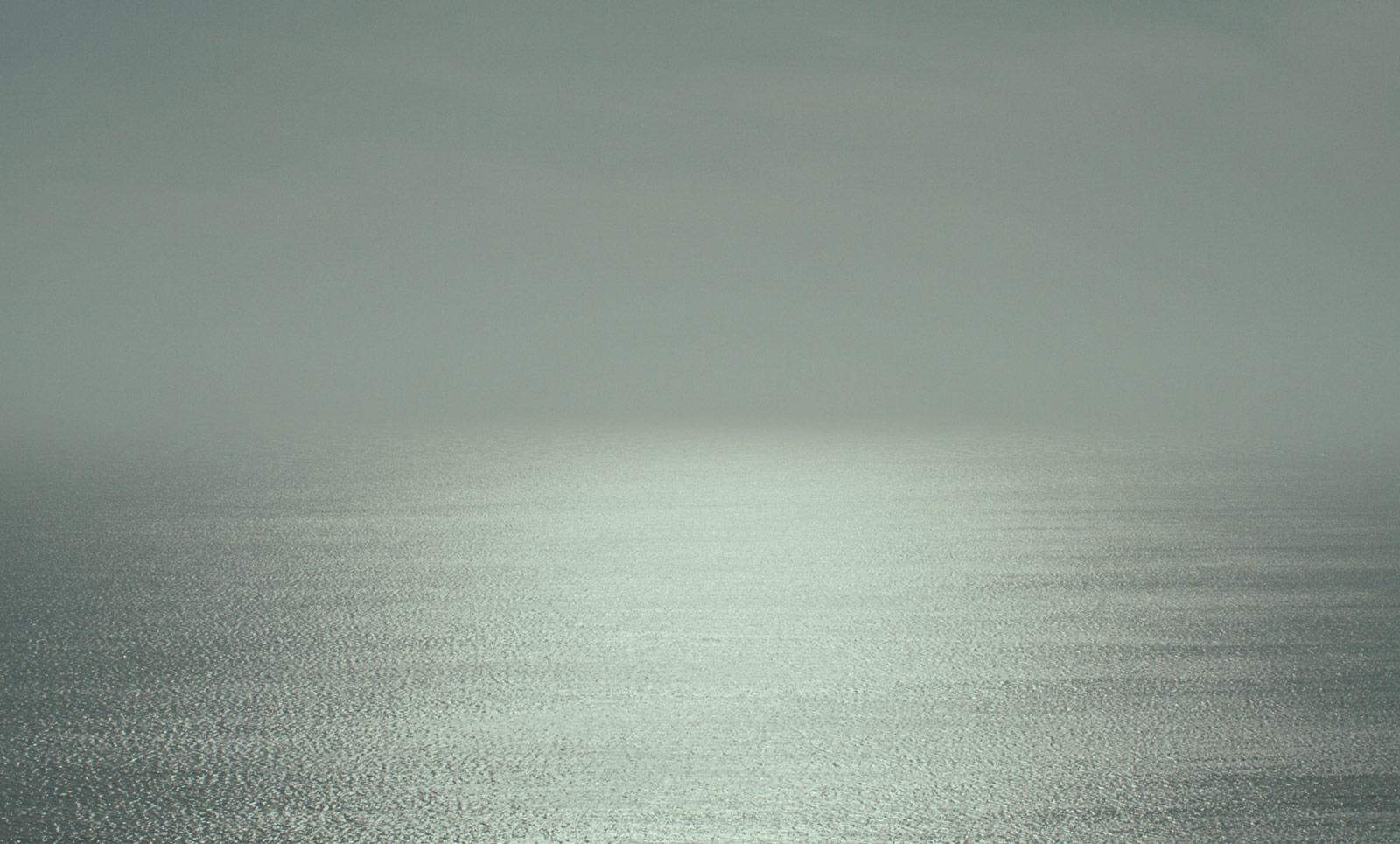 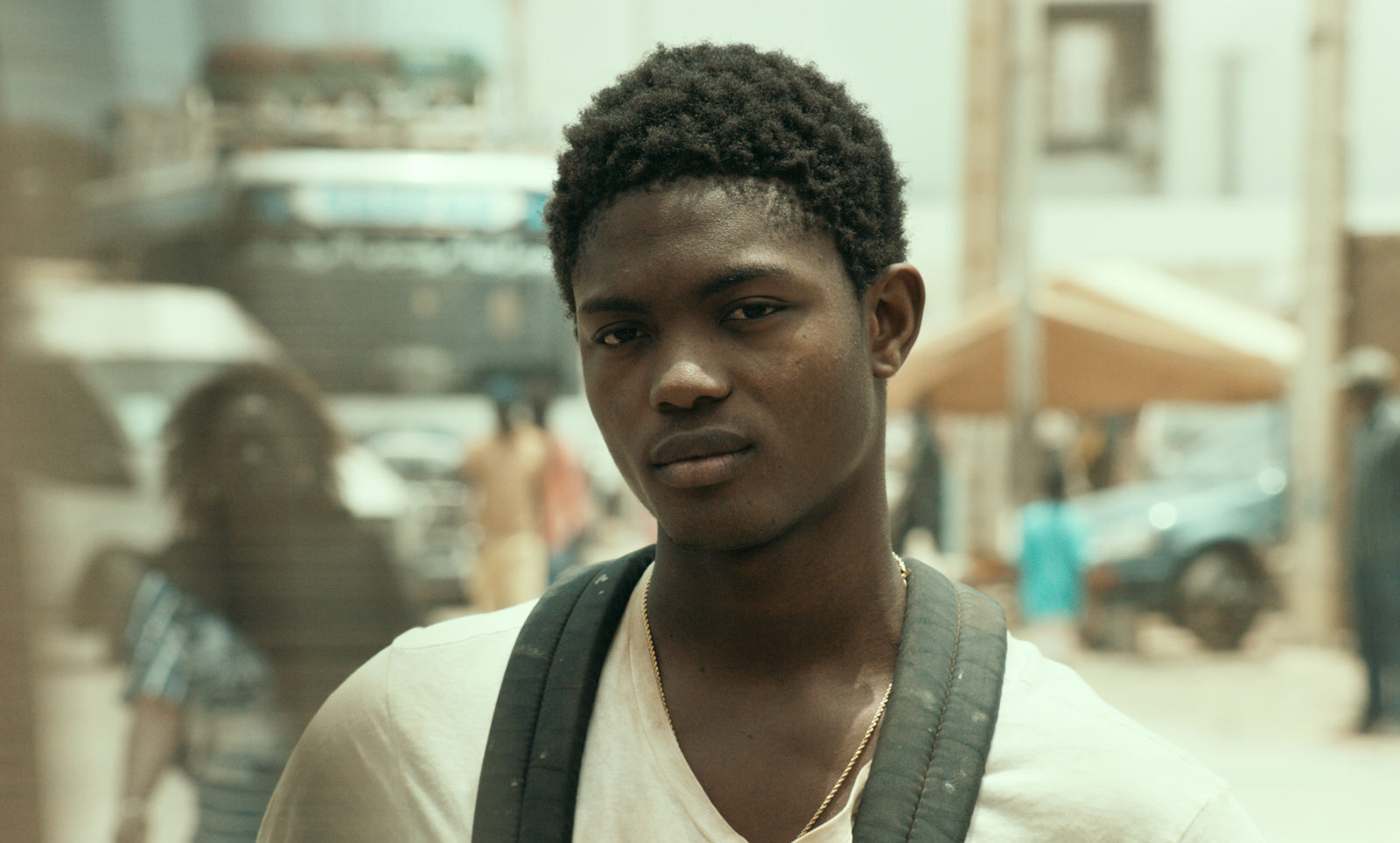 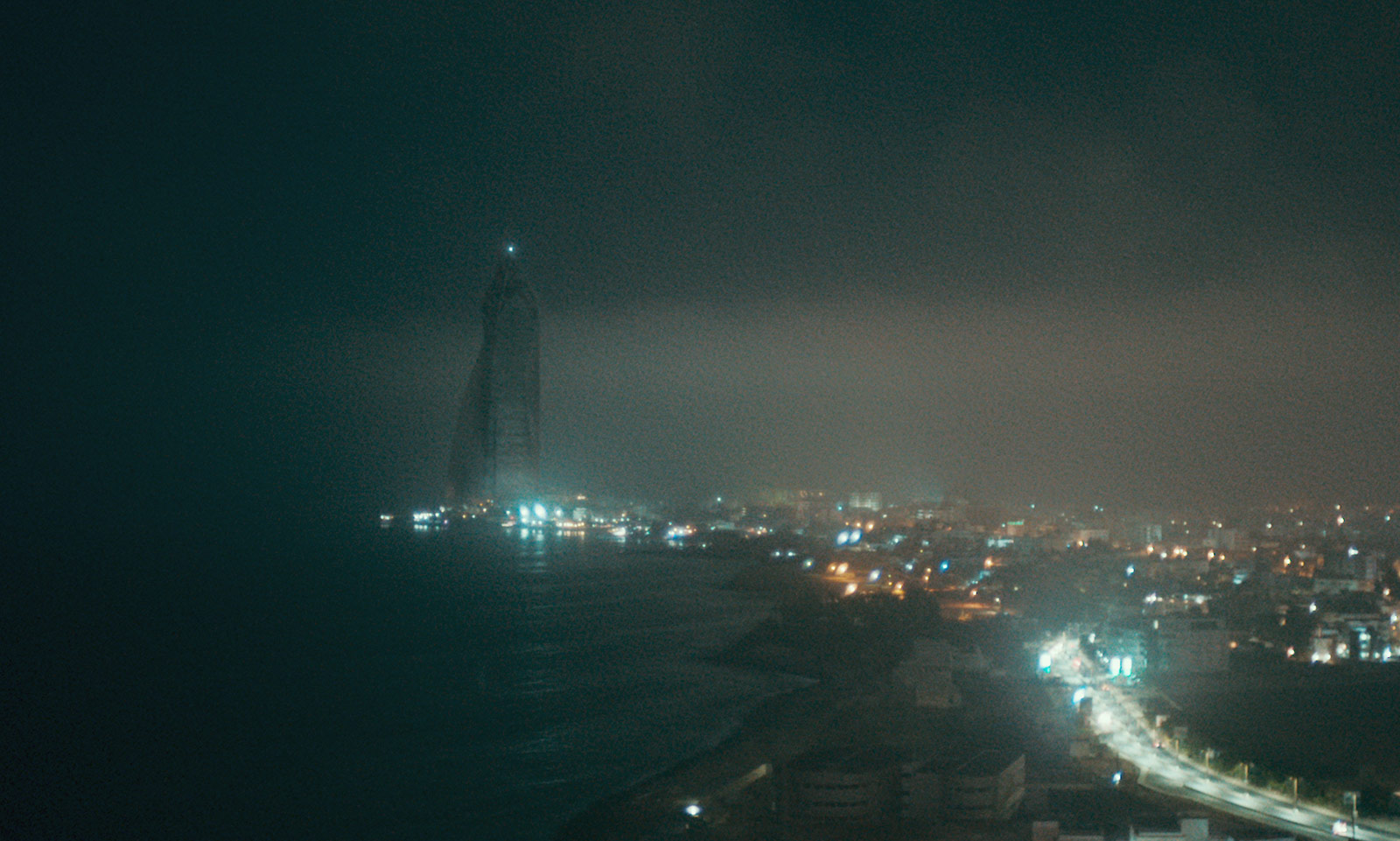 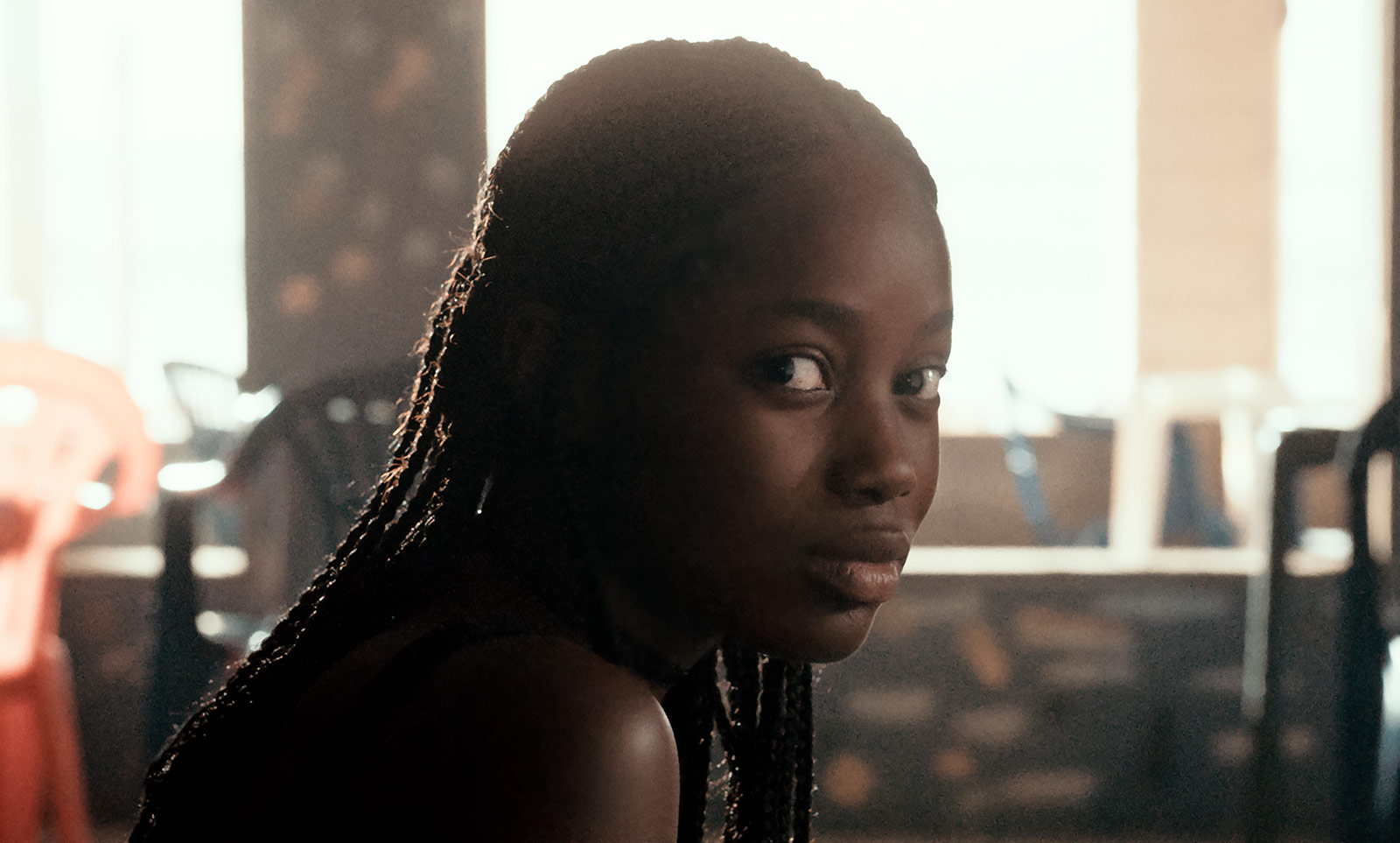