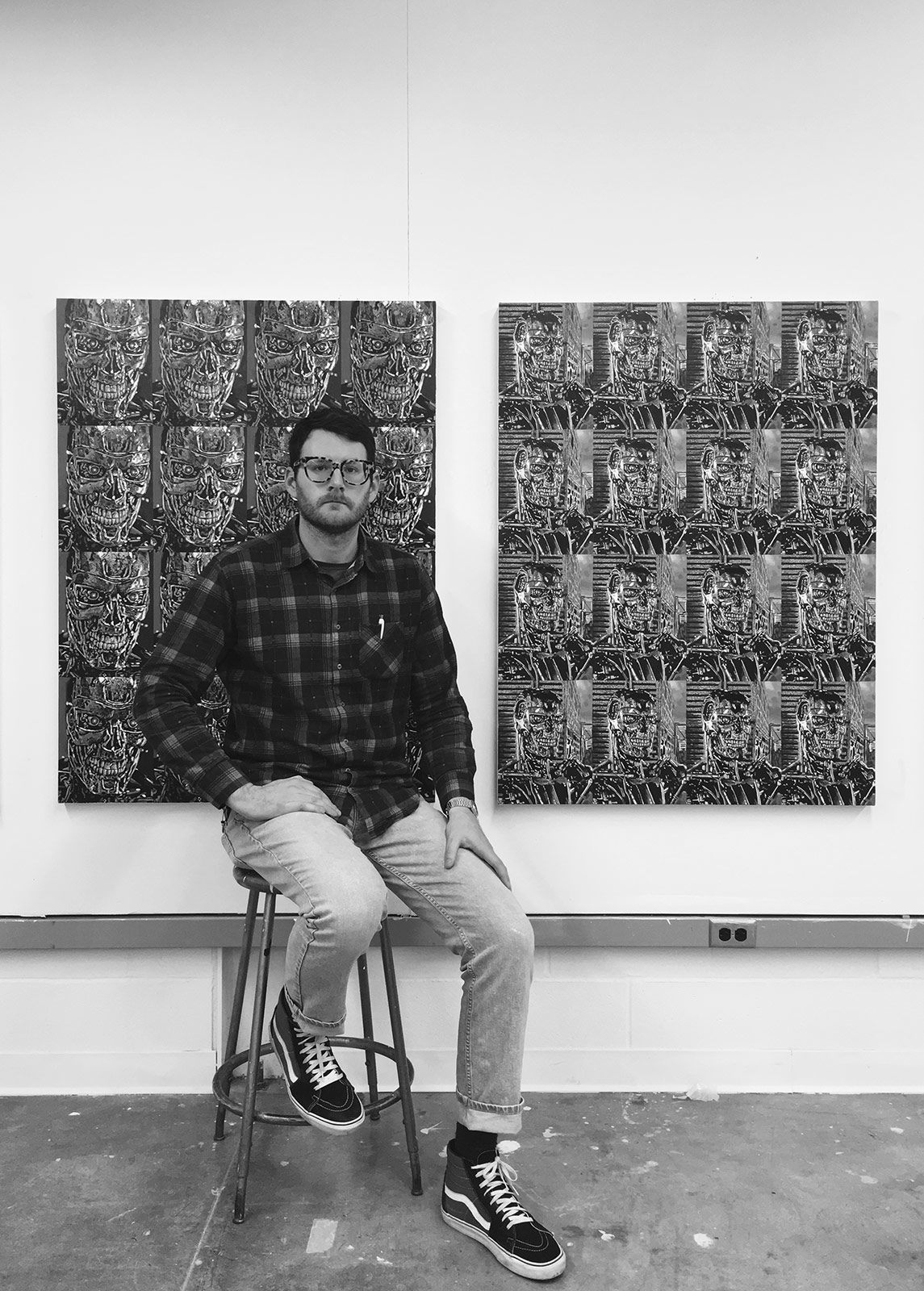 Painter Mathew Zefeldt brings the digital language to the physical canvas. Through brush strokes, he represents computer-generated elements, from video games to smartphone displays, Photoshop icons and special effects. But his work goes beyond canvases when he extends his paintings to the walls, ground and ceiling, and the exhibition space becomes an immersive installation difficult to escape. Do you dare to enter his fascinating universe?
Hello Mathew, could you tell us a bit about yourself? When did your interested in art start?
I teach drawing and painting at the University of Minnesota. I grew up in the suburbs of the San Francisco Bay Area. Growing up, I was interested in sports, drawing, and video games. Not much has changed, if I frame it that way.
How would you describe your work in a few words?
My work is primarily painting. My approach to painting is that of thinking about the digital world, Photoshop, computer-generated special effects, video games, smartphone displays, and trying to bring that language into painting. I also mount large-scale, site-specific painting installations. This involves covering a space with hand-painted imagery, transforming it into an immersive experience.
And what usually inspires your paintings?
I subscribe to the idea of not needing inspiration, just going to the studio every day and working, whether you feel like it or not. I try to treat painting like a job, albeit a pretty special one. 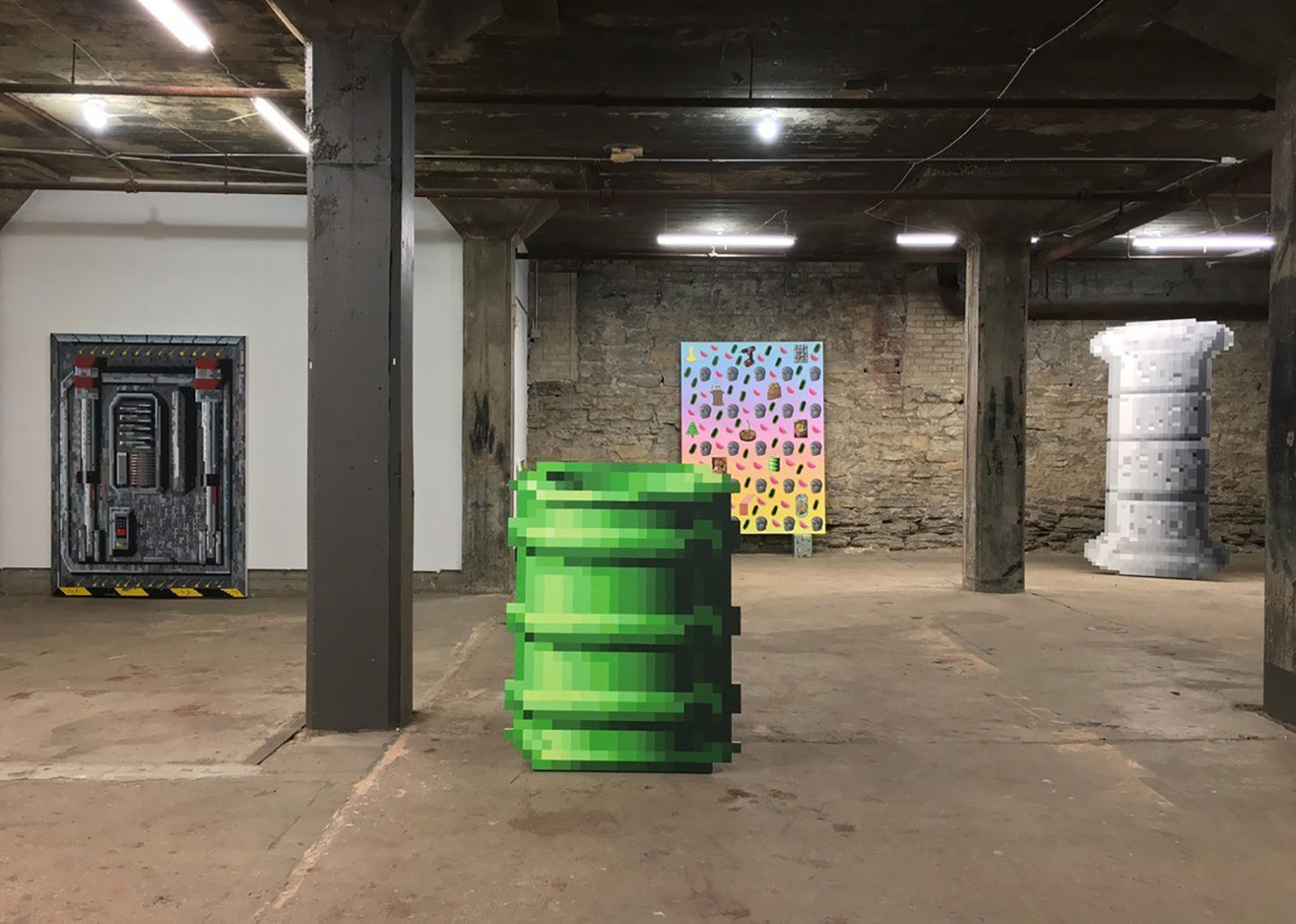 For me, it’s really intriguing that your work looks very digital and very analogical at the same time. What’s the process when creating a new piece and how long does it take you till it’s complete?
Yes, the idea is to bring digital languages – or ways of seeing – onto an analogue surface through a traditional technique. Paintings usually take one to three weeks, depending on scale and detail.
What do you use more: the computer or your hands? Do you start by creating it digitally and then you start painting by looking at the picture? Or do you have the images in your head?
It really depends on the painting. The Some Sum paintings, for example, were completely figured out on the canvas, although they are referencing iPhone home screens. Other paintings, like Hunter/Killer, I had to sketch out on the computer first because it involved stretching images out to fit within a compositional strategy I developed. Part of what draws me towards painting is getting away from the computer – even though I think about it while painting.
And what sensation do you want to evoke when putting together modern elements with historical ones? A gradient together with all those old statues’ faces/heads give me a nostalgic and mysterious feeling. As well as the picnic patterns and all the pastel colours. Part of the work you are referencing is about putting things together from different sources.
In this work, I was thinking about the ethos of collage and challenging myself to paint in different techniques or styles on a single surface. I’m not always sure about the result because a lot of that work is experimental – which made it exciting to me. 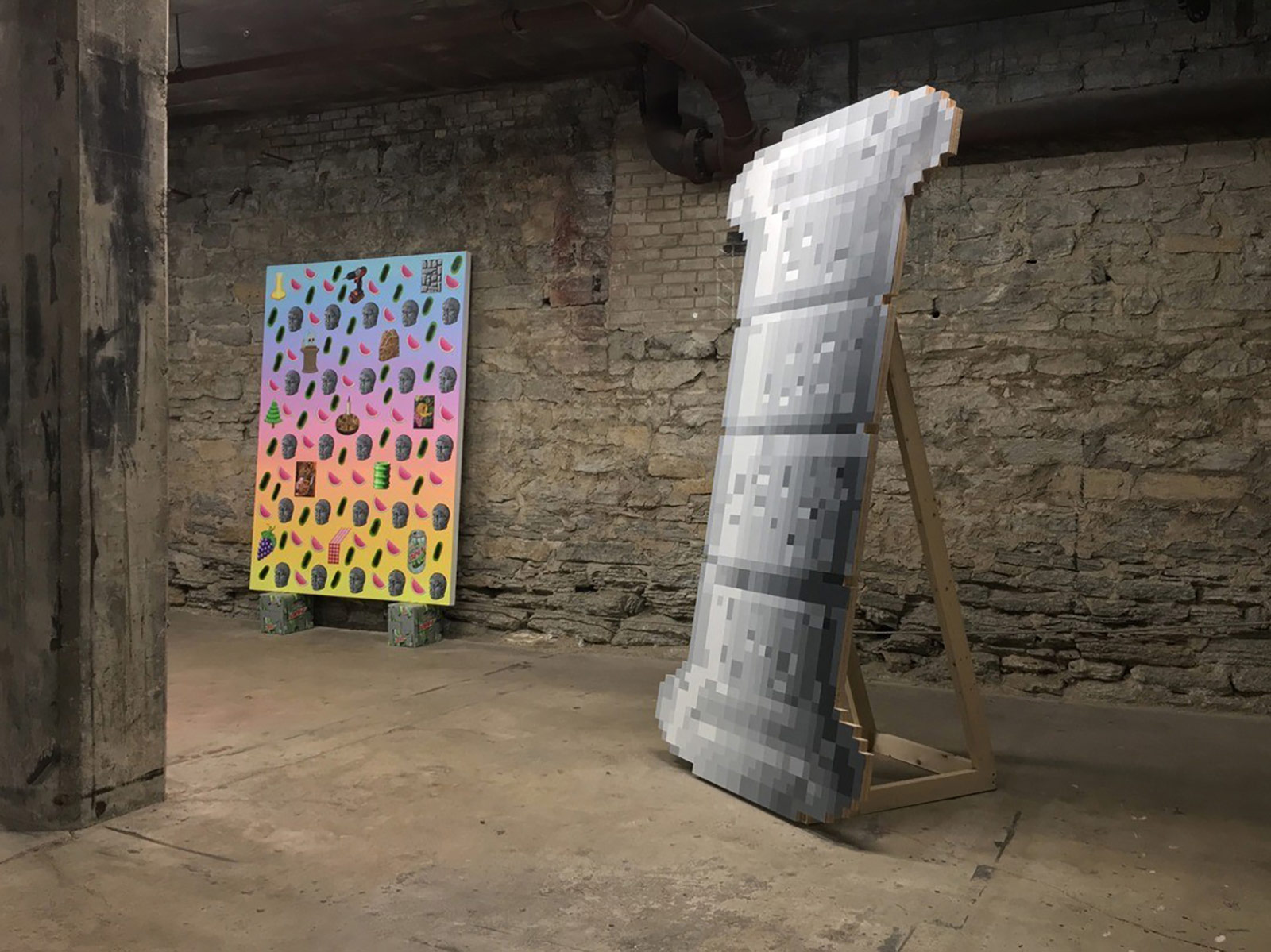 Most of your artworks are based on digital culture. If you were born in a previous time with no computers, apps and the Internet, do you think you’d still be an artist? What would you paint about?
I would absolutely still be interested in painting in a pre-digital world. But I would probably admit to looking for the new thing to make with old stuff. Monet’s The Gare Saint-Lazare paintings featured painted descriptions of a revolutionary piece of technology for the 1870s: the train. Also, most of Andy Warhol’s work is fascinating to me, but specifically a work titled $199 Television from 1961 (currently on view at the Whitney Museum in New York), which features a simultaneously loose, painterly application of paint with a more refined mechanical approach to painting of an advertisement of a television, something that felt so current; it probably felt alien on a canvas rendered in paint.
What about the repetition of certain elements? Is there a reason why you use it so much in your work?
Painting is thought of by many as a unique object and fetishized because of evidence of the artist’s hand. In many ways, that is why I love going to museums and galleries, to look at paintings, but I am trying to subvert that a little. Painting can be cloned but there are often defects. From afar and in photographs, these iterations look mechanical, but from close up, they are unique, they have the imprecision of my human hand.
In your exhibition Forms Forming Forms at the Santa Monica Museum of Art (now the Institute of Contemporary Art, Los Angeles), you extended your art to the walls, almost like the whole room was transformed into an installation. Which happened again in following exhibitions like Sunny Awnings, Marble Head From a Herm and most recently, in Hunter/Killer, in which you fill the whole space with art. Why, at first, did you decide to wrap the audience with these immersive installations? And how has it evolved until now? What effect do you wish it to have on the viewer?
The initial idea was to extend the conversation of figure/ground in the paintings onto the walls, so the painting became a figure (with a figure/ground) and the walls became the ground. Since then, the idea hasn’t changed that much, but the content of the work certainly has. I have always painted from images that already exist in the world, but recently I am more interested in painting new images from our culture and digital spaces.
Technically, the process of these installations has also evolved. Earlier, the paintings were painted directly on the wall. This was the case for Santa Monica Museum of Art (now ICA LA), and Good Weather. At the Minneapolis Institute of Art, I created a wallpaper from scans of paintings in the show because the space was so large. Recently, I have been painting of quarter inch thick plywood or masonite in manageable 3 x 4-foot sheets. These get tiled into larger images that cover entire walls. This allows me to paint them in my studio, spending more time on them, while still being site-specific, based on detailed measurements of the space. This was the case for my shows at Circuit 12 in Dallas, Verge in Sacramento, and most recently, Big Pictures LA. 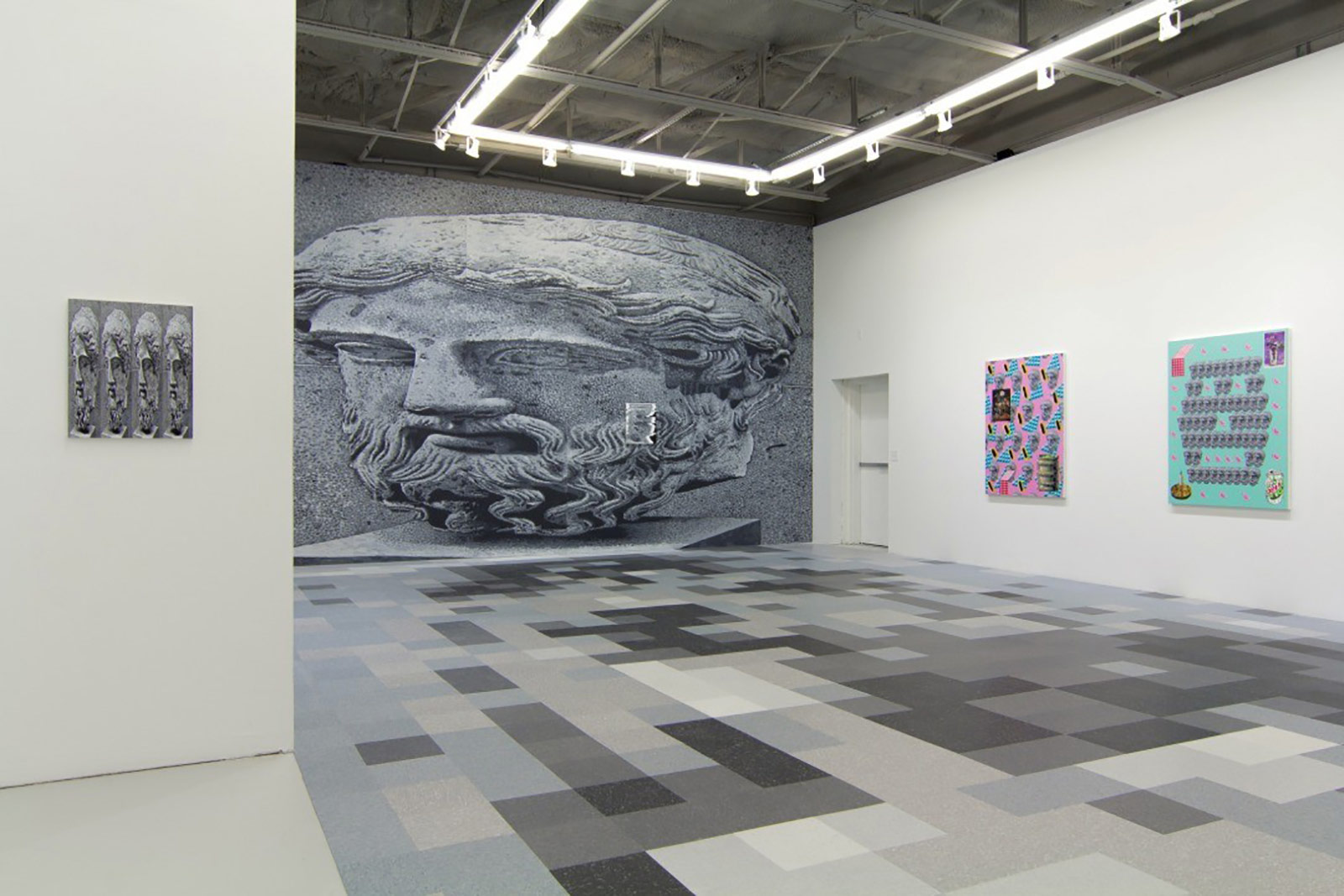 In your painting installation Hunter/Killer, Teminator’s face is repeated and redimensioned multiple times in the paintings as well as on the walls and floor. Does it represent Artificial Intelligence and how it grows exponentially? Is the viewer supposed to feel threatened when in the centre of the room?
Maybe. I am aware of that reading. A lot of people are alarmed by AI, most entertainingly Elon Musk, who said we are summoning demons. I can’t possibly know that but I’ll admit I was interested in tapping into that anxiety. On another note, the image I painted from was taken from a screenshot of the fifth Terminator movie, Terminator Genisys, from 2015. It’s a pretty terrible movie, which reintroduces the concept of time travel, I think to basically revive the nostalgia of the earlier movies. The plot recycles so much from the earlier movies too.
Most movies (that make a lot of money) are remakes, reboots, sequels, or prequels. From the movie studios perspective, it’s a safe bet, but it often results in pretty unoriginal, formulaic content. So in a way, a successful movie franchise maybe grows exponentially too. But I liked the idea of painting an entire room, every square inch, with a quick screenshot from a forgettable movie sequel. It’s both benign and threatening, I suppose.
What about yourself? Do you feel threatened by AI?
Not personally, no. But maybe in a few years we might need universal basic income because so many people will lose jobs to robotics, artificial intelligence, or robots with artificial intelligence. I am more excited to see works of art, especially paintings made by robots with AI. I’ll be in the front row.
Since you have such a particular style, I have to ask, what for you describes something as a work of art?
Whatever people say. I’m really not the one to decide, I don’t want that kind of power. 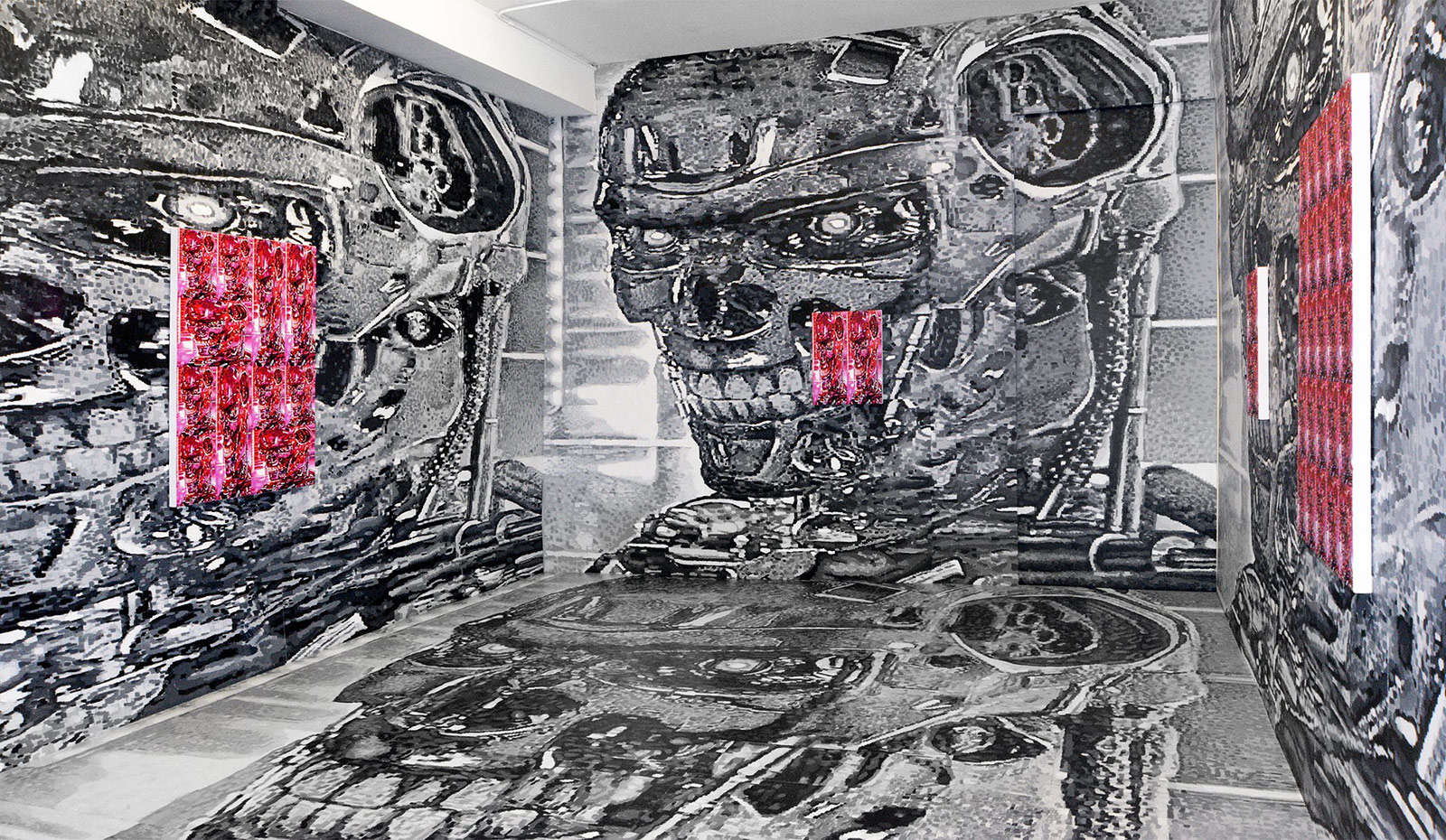 Who are your all-time favourite artists?
Some of my all-time favourites are Cynthia Daignault, Jose Lerma, Josephine Halvorson, Jamian Julliano-Villani, Matthew Hansel, Josh Reames, David Humphrey, Morgan Blair, Henry Gunderson, Anne Neukamp, Laura Owens, Vija Celmins, Gerhard Richter, Sigmar Polke, David Hockney, Wayne Thiebaud, and James Rosenquist.
If you weren’t an artist, what else would you be?
Good question. I always thought a high school teacher, not sure what subject I would teach though. Saying art is cheating, so maybe history or a water polo coach.
Where do you want to take your paintings next? I’ve seen that you’ve mainly exhibited in the United States, any chance you’ll exhibit in Europe, Asia, etc.? Any exciting plans for the future?
I am planning on working more from video games, specifically screenshots I have taken from the countless hours I’ve spent in Grand Theft Auto. I am really interested in the worlding aspects of the game and their similarities to our physical world; but also the things you can do there and not here, like steal a military jet, or drive off a cliff, or get eaten by a shark. The paintings are strange, you can tell they are from video games because of the third person views, but the polygons become brushstrokes so they become much more painterly. In a way, it’s an entry point into landscape painting, but instead of painting en plain-air, it’s about painting digital trees, digital sunsets, digital roads. 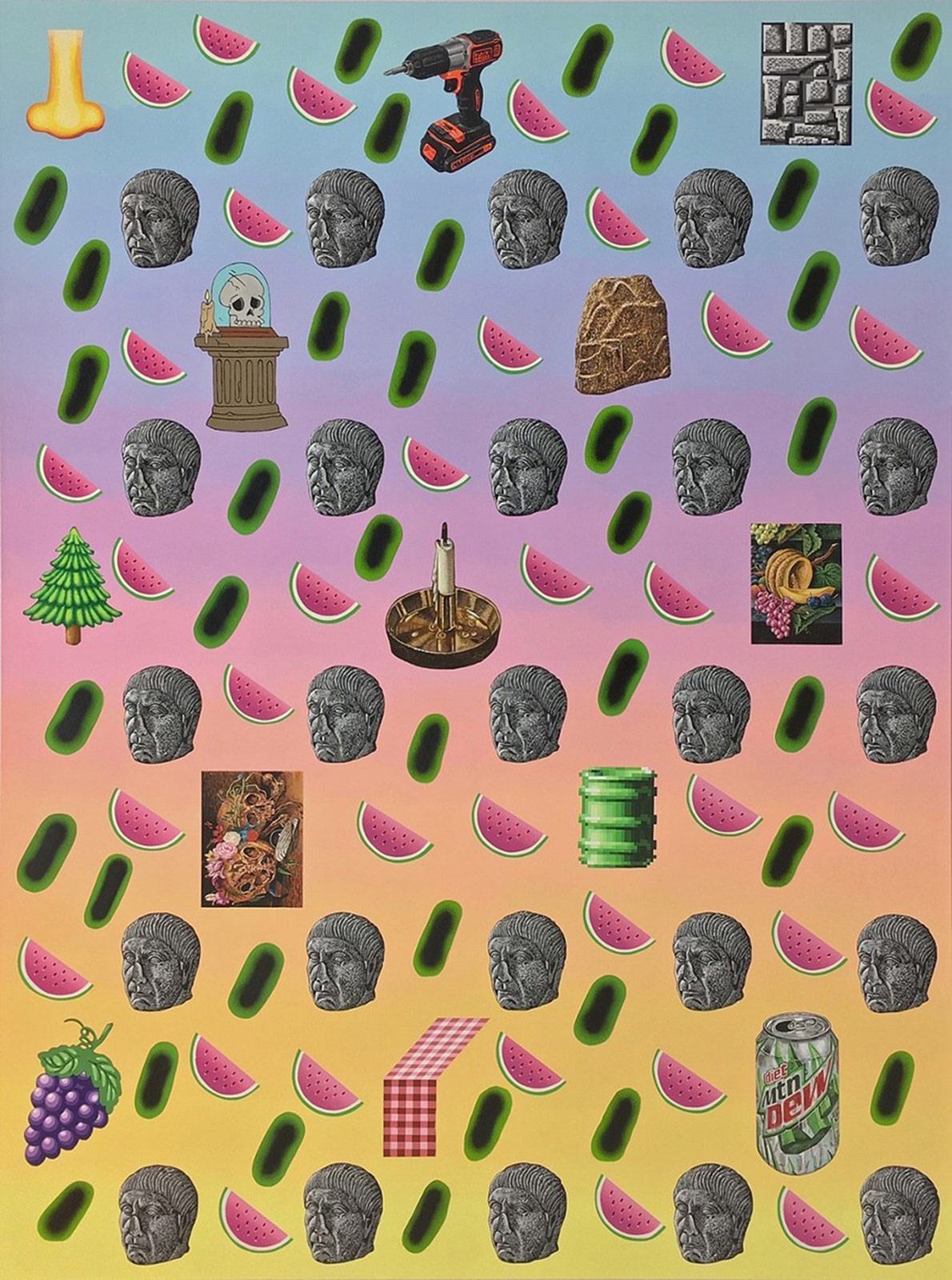 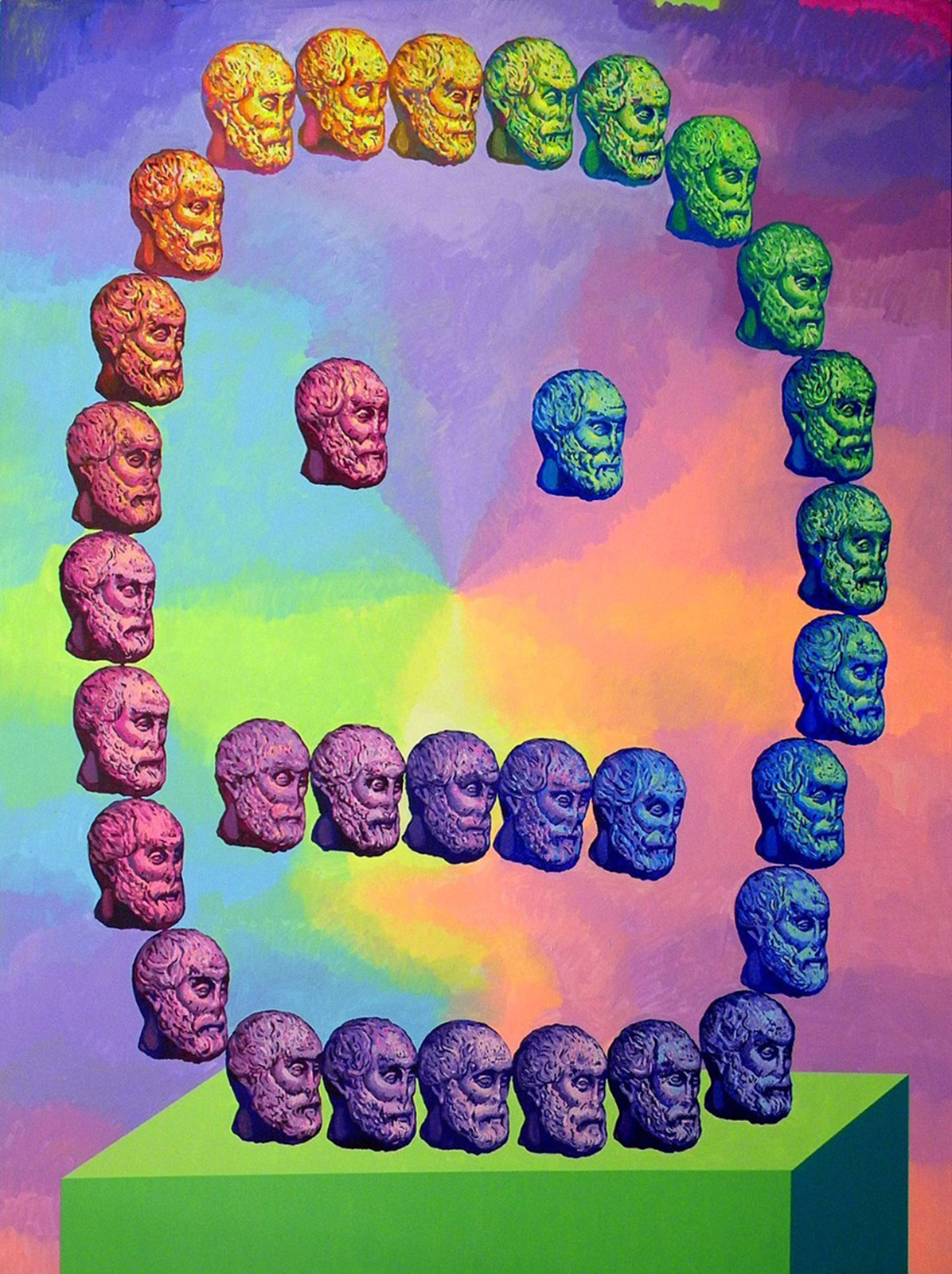 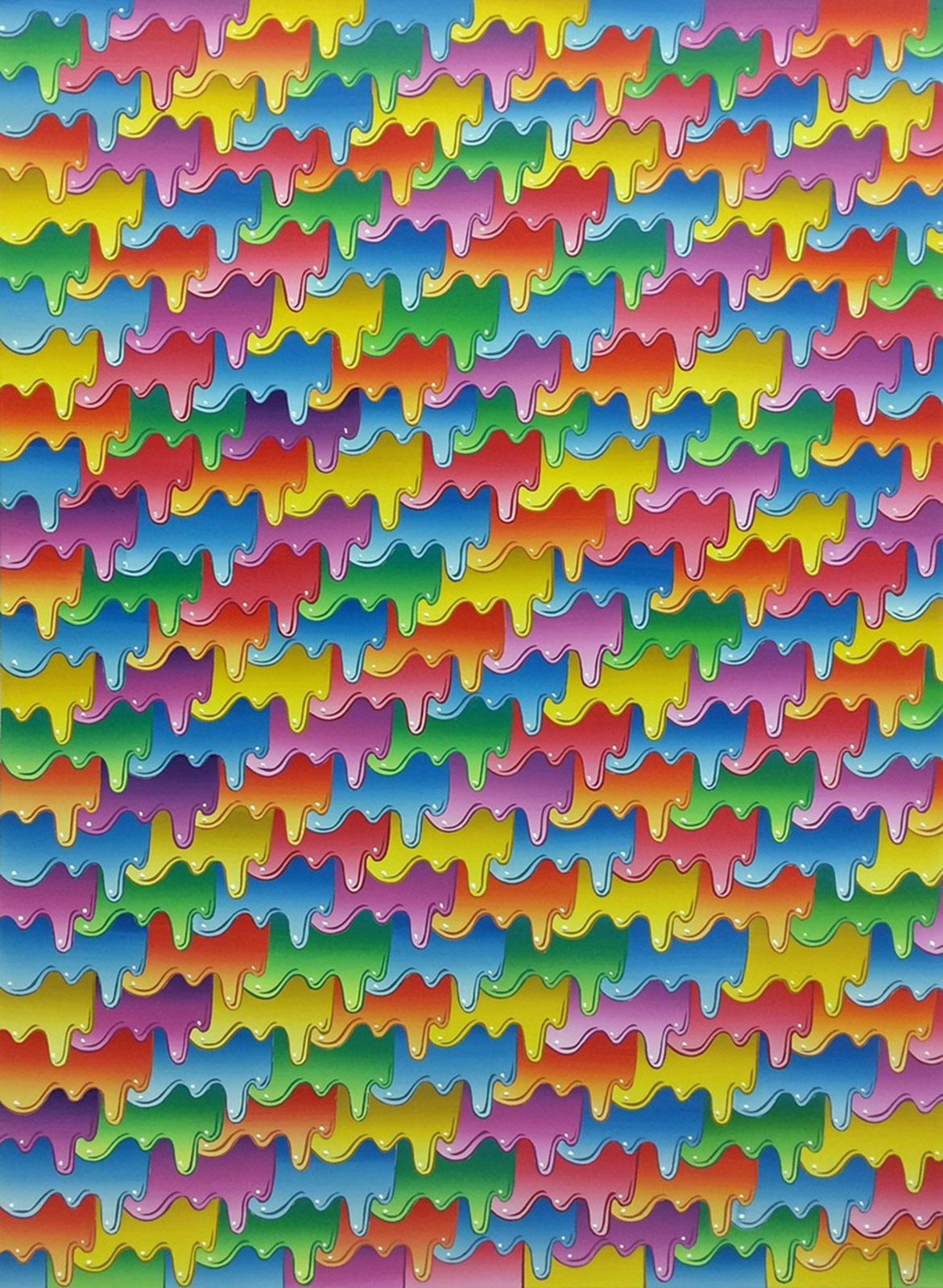 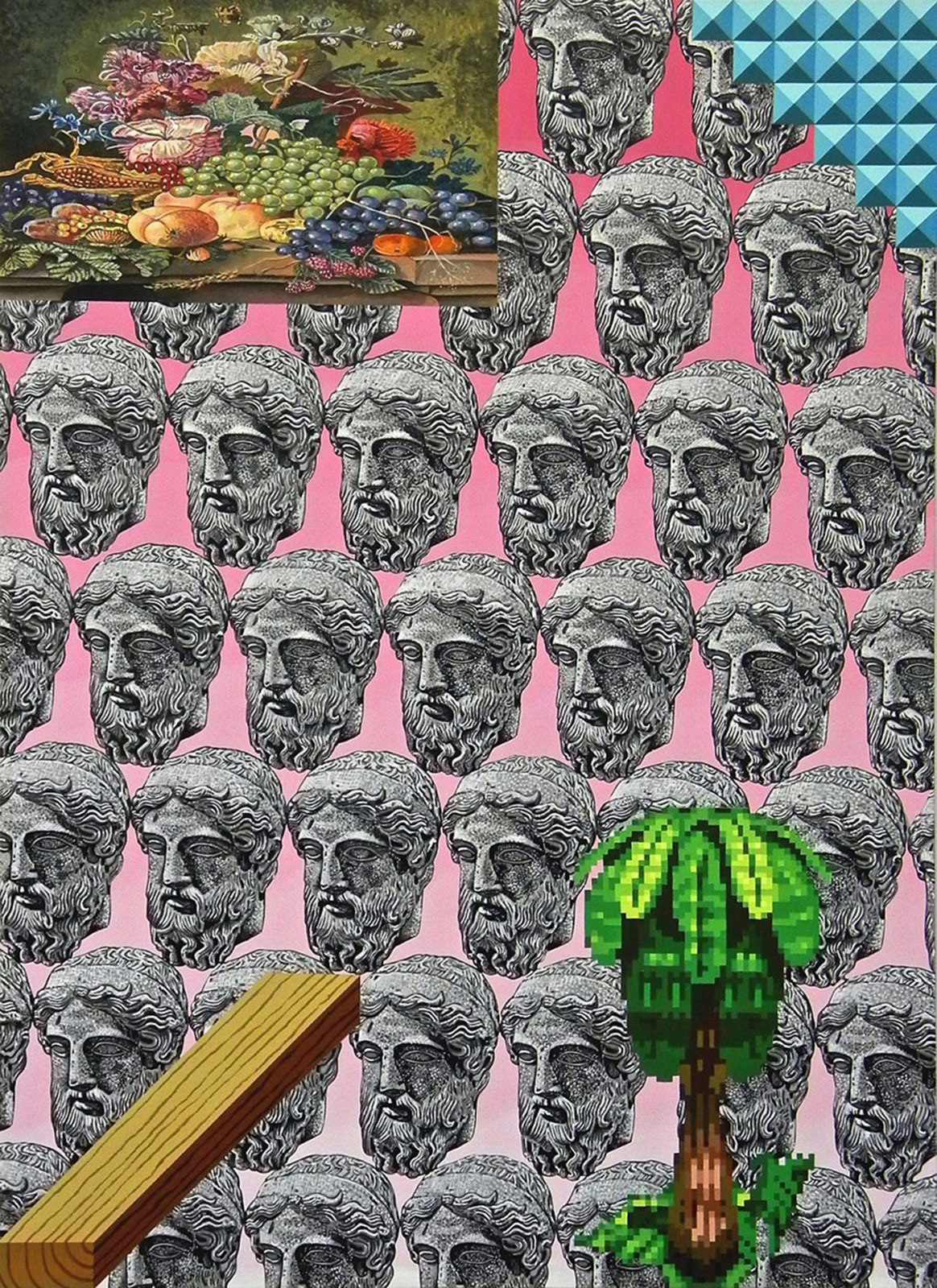 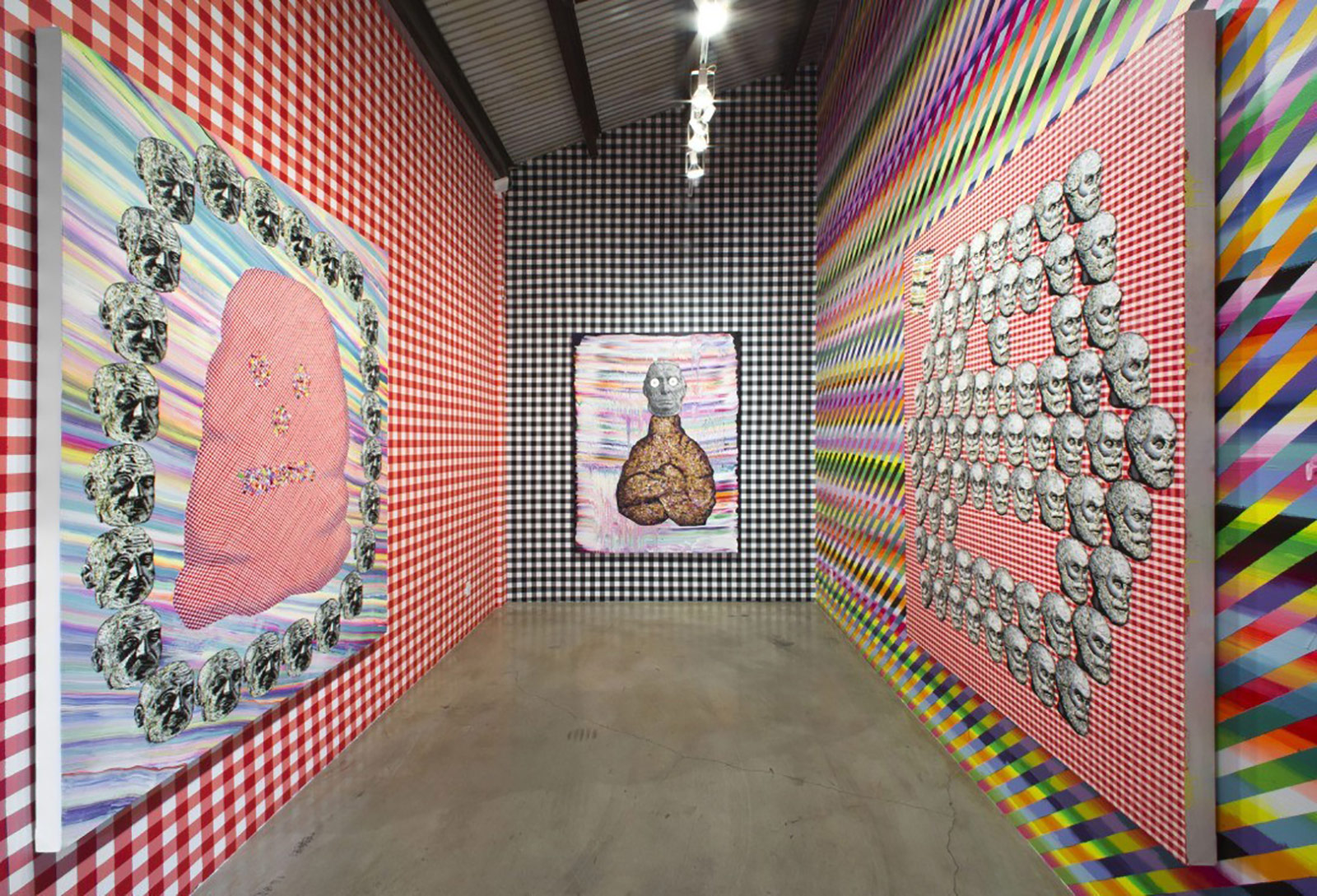 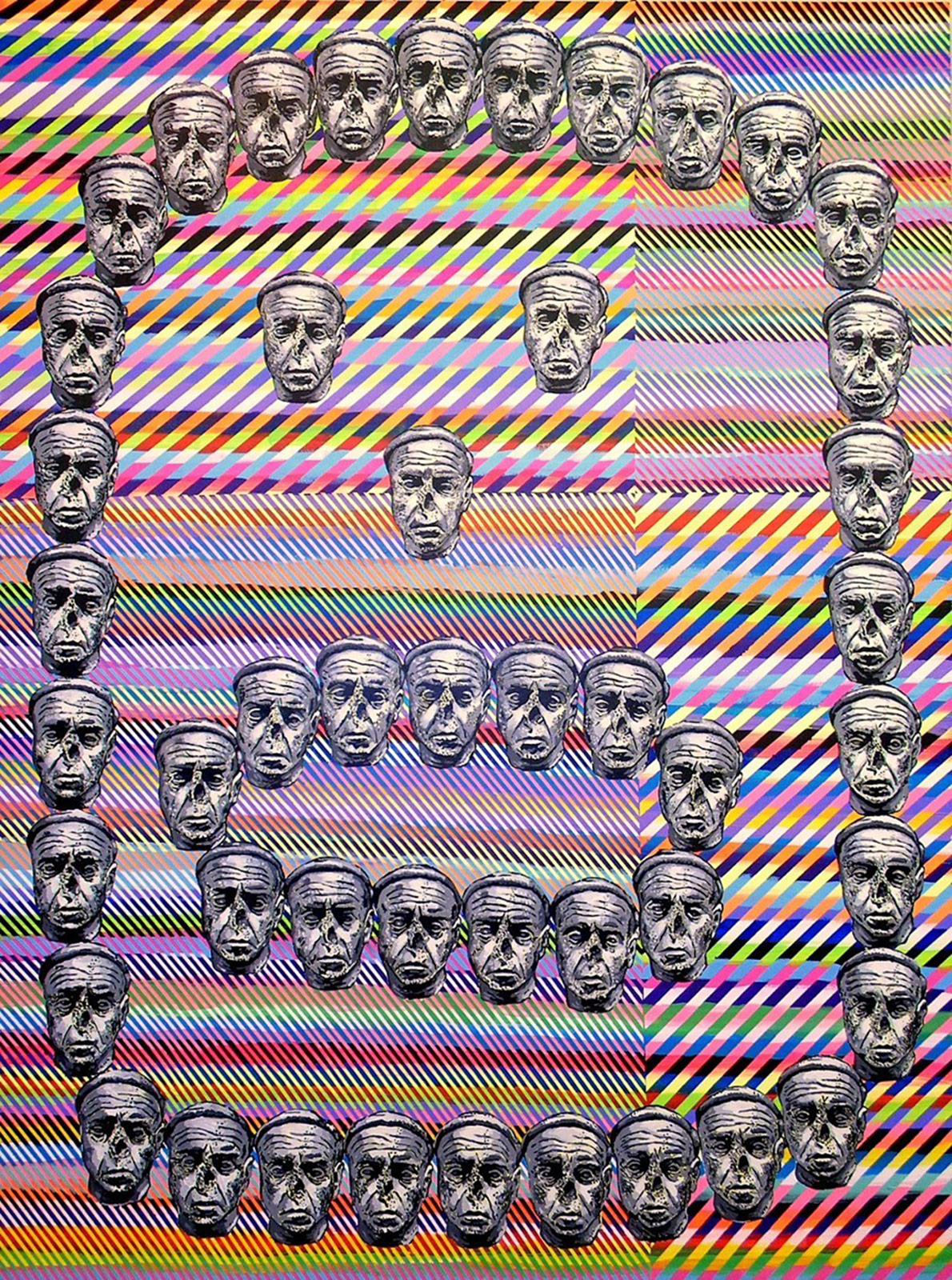 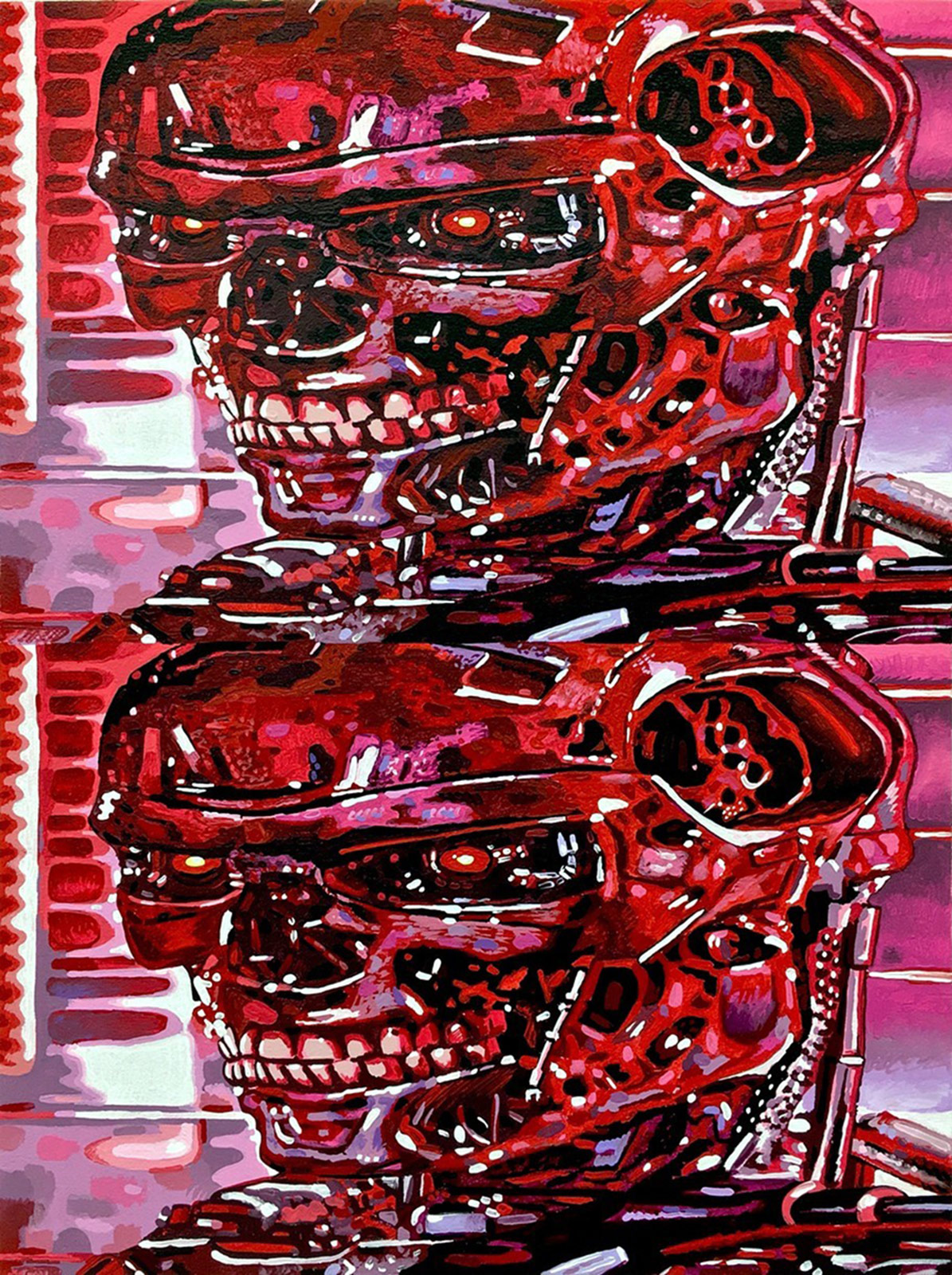 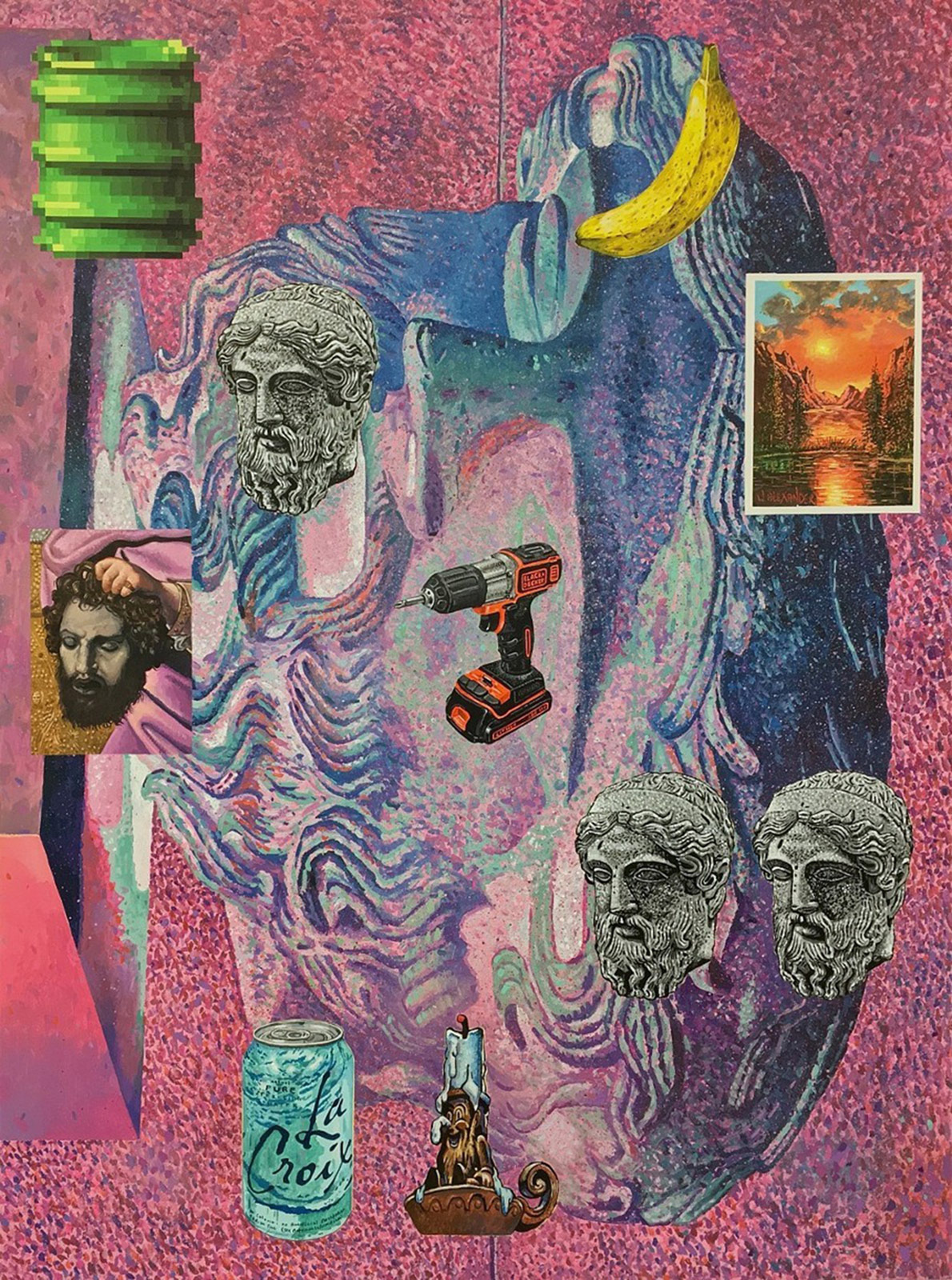 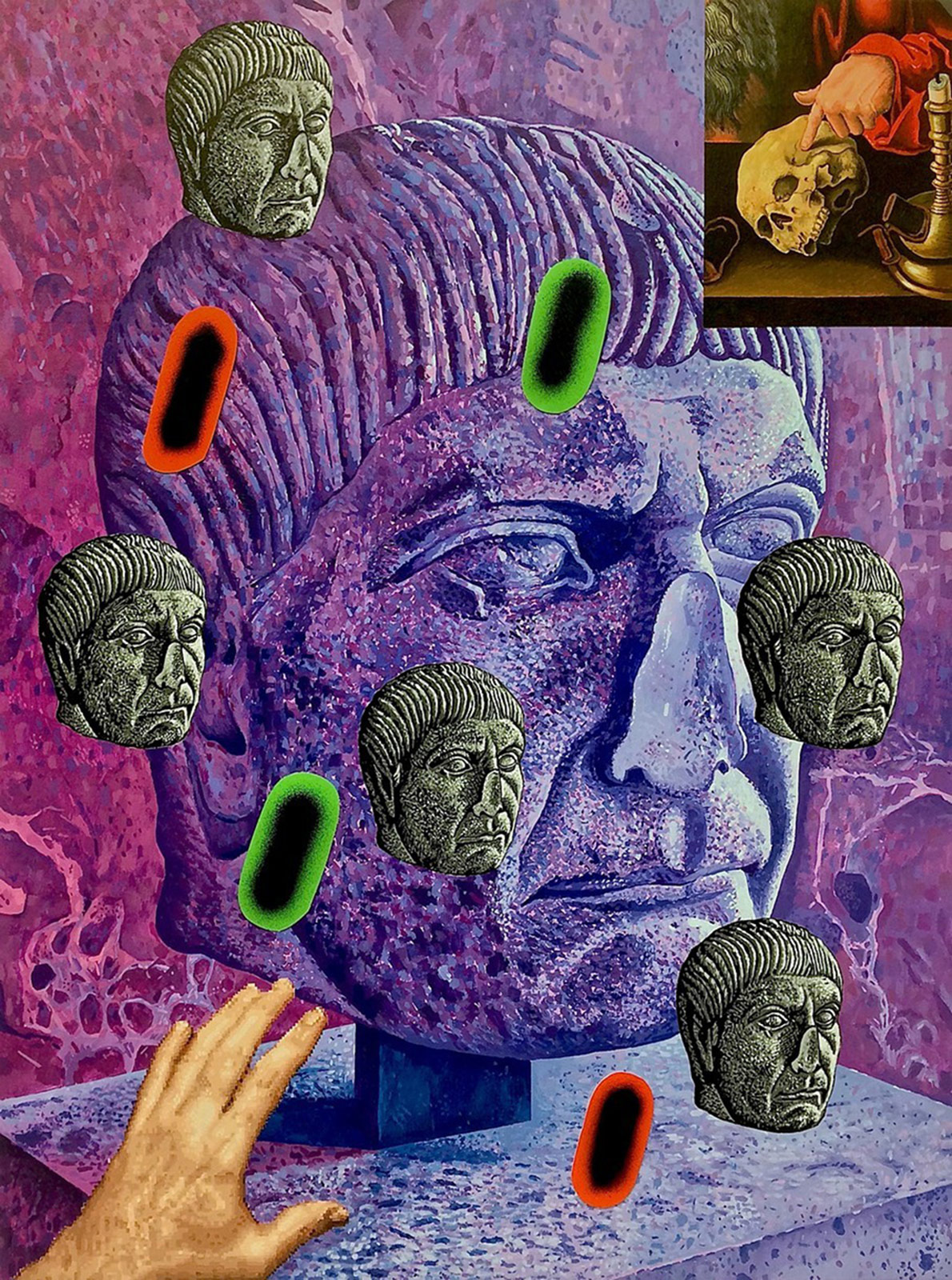 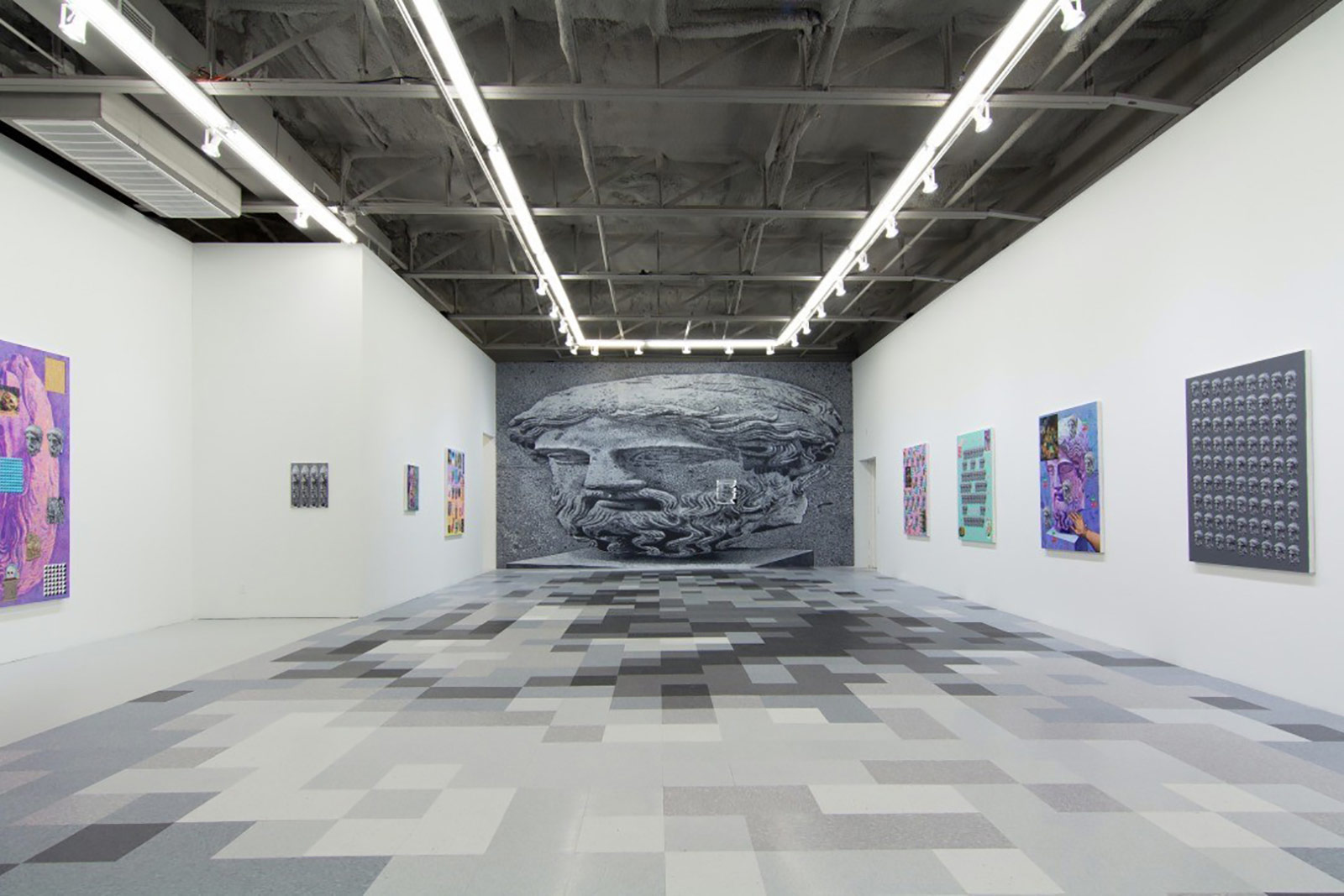 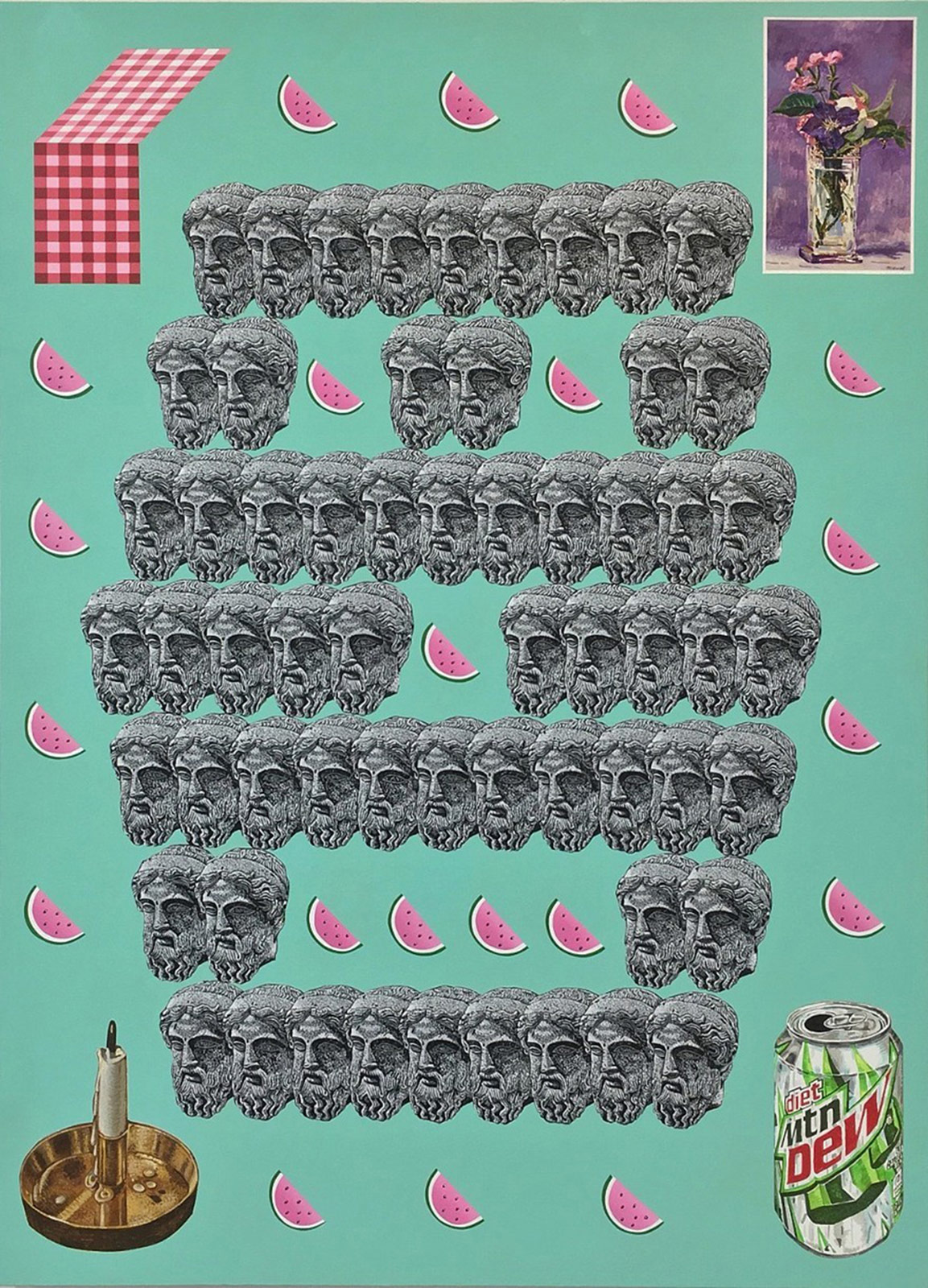 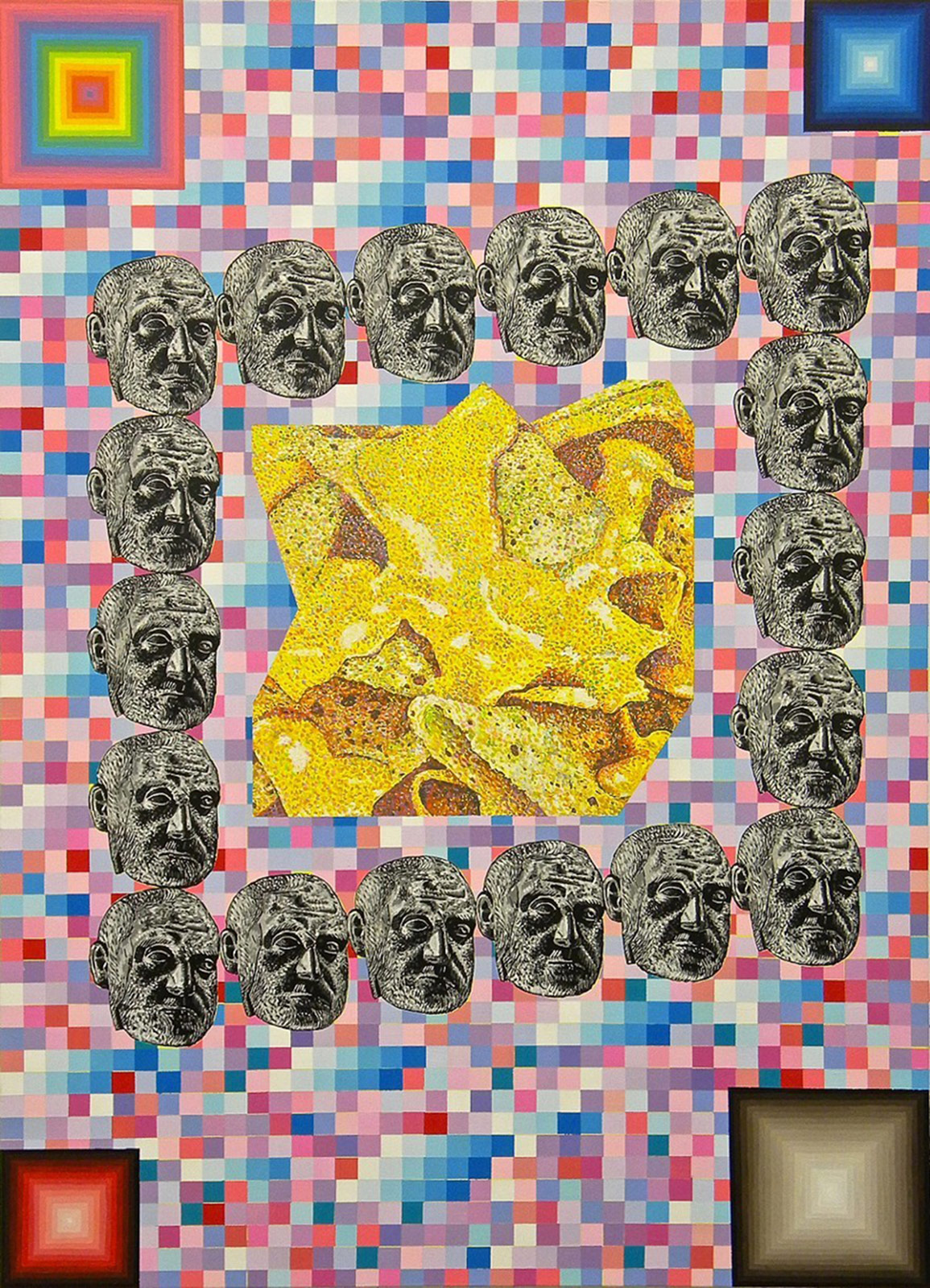 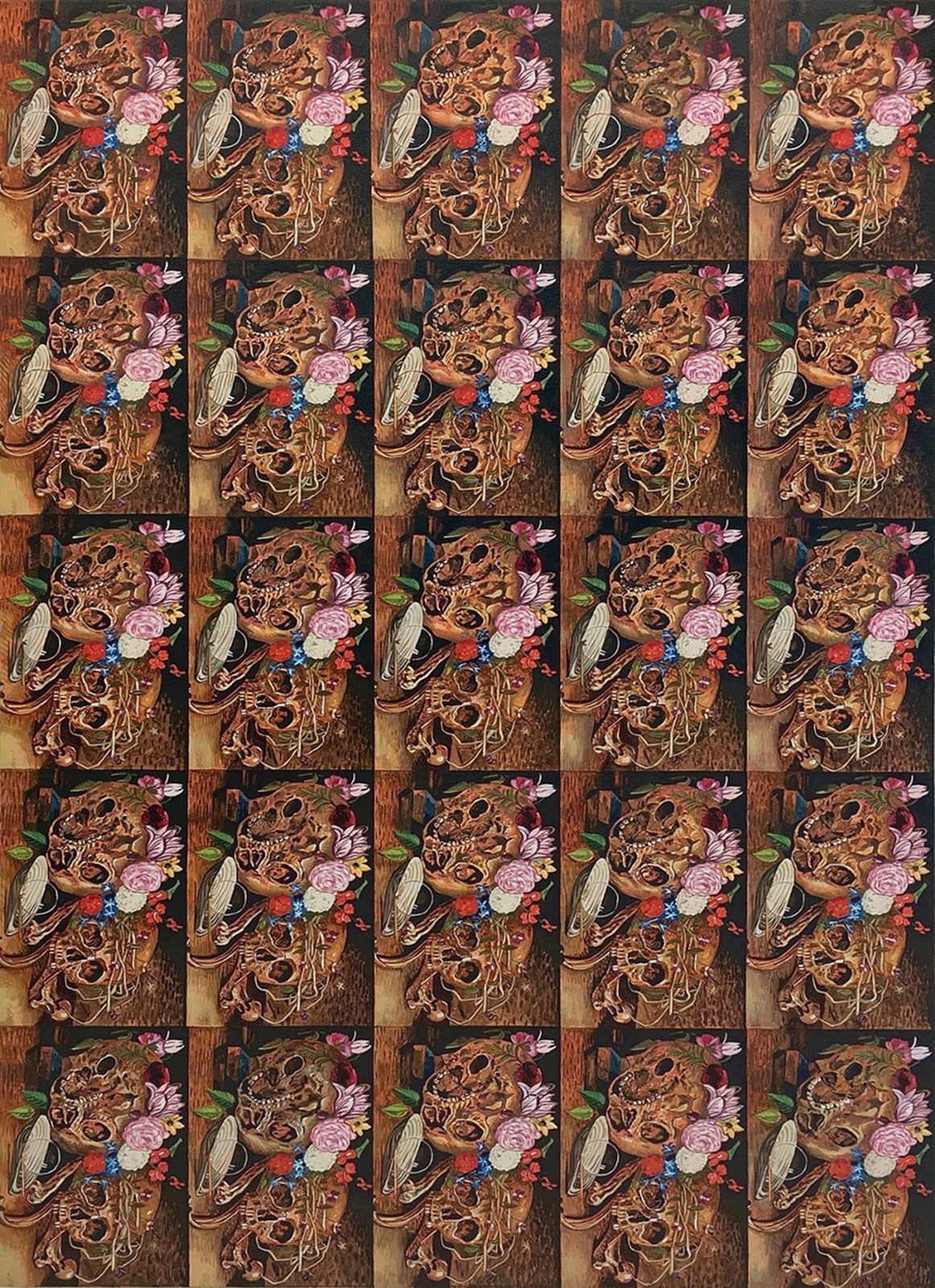 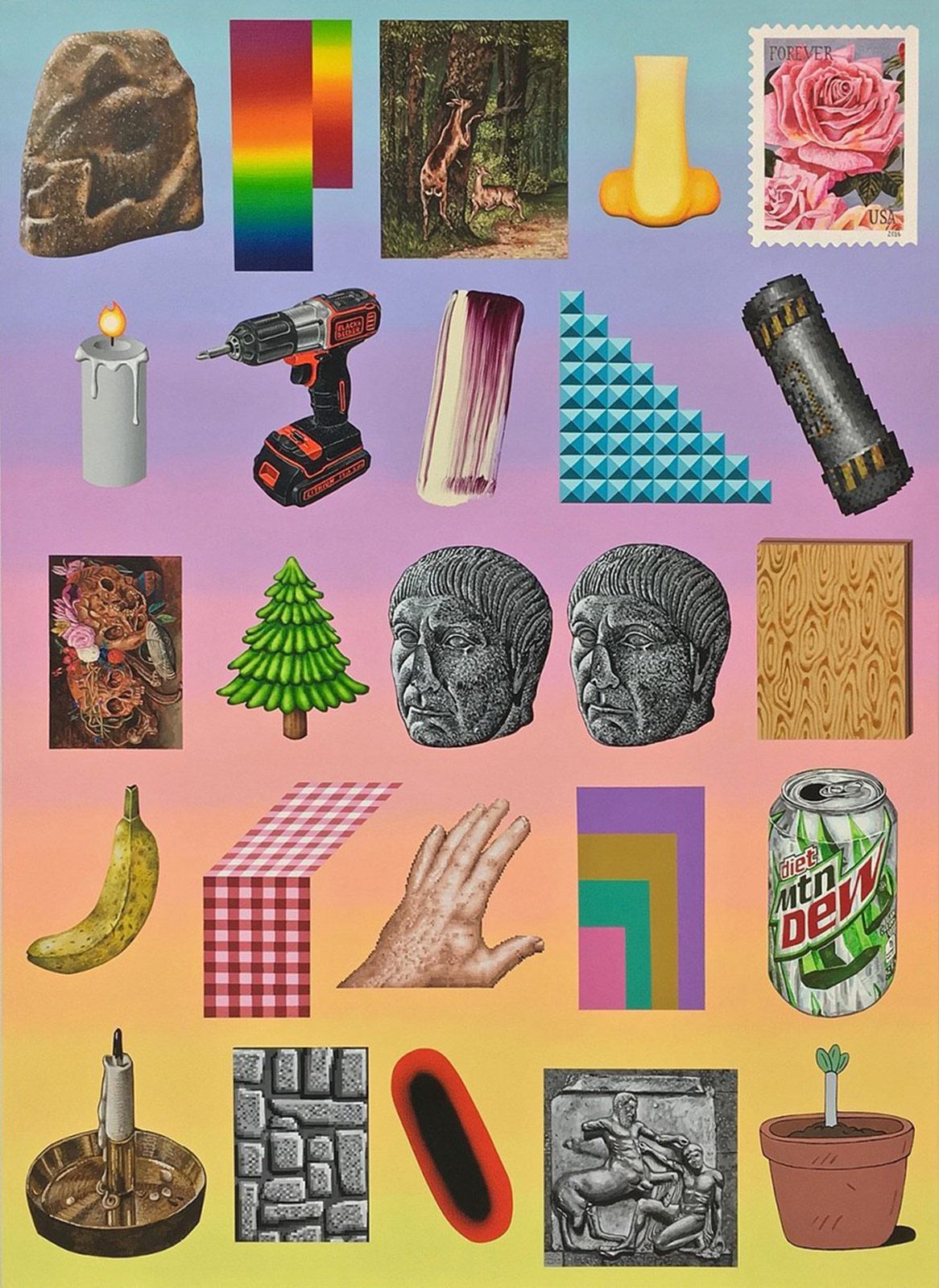 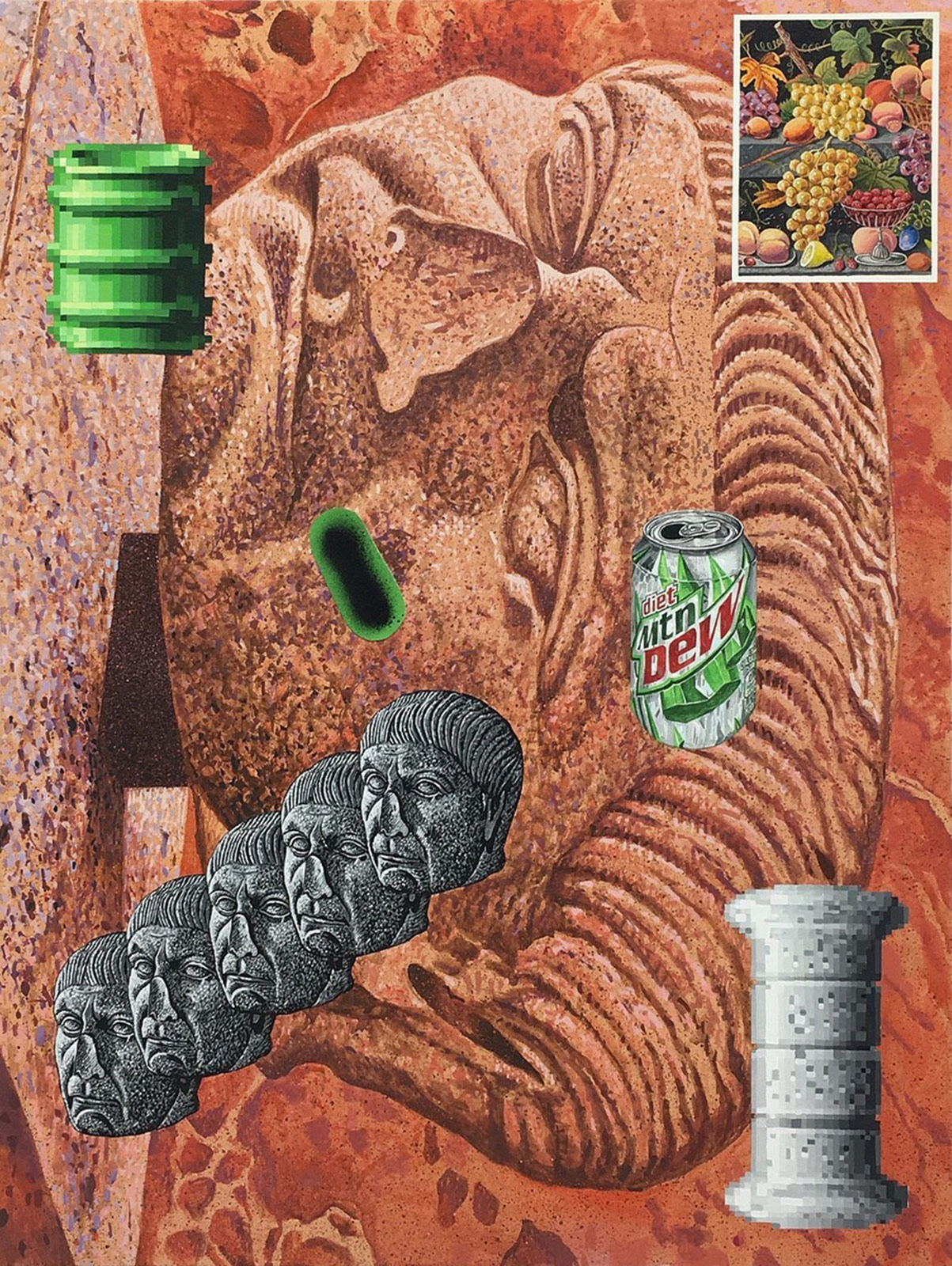 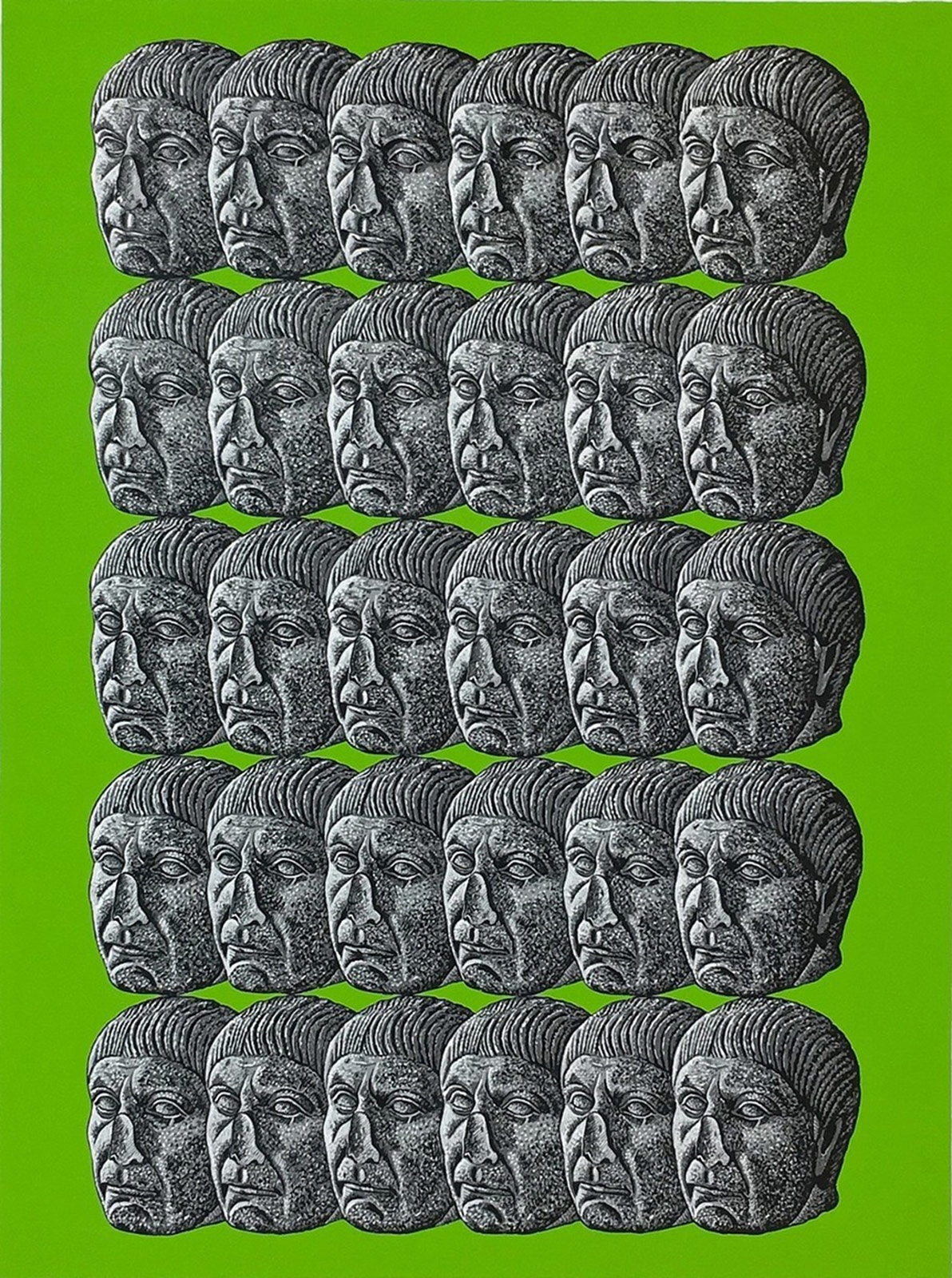 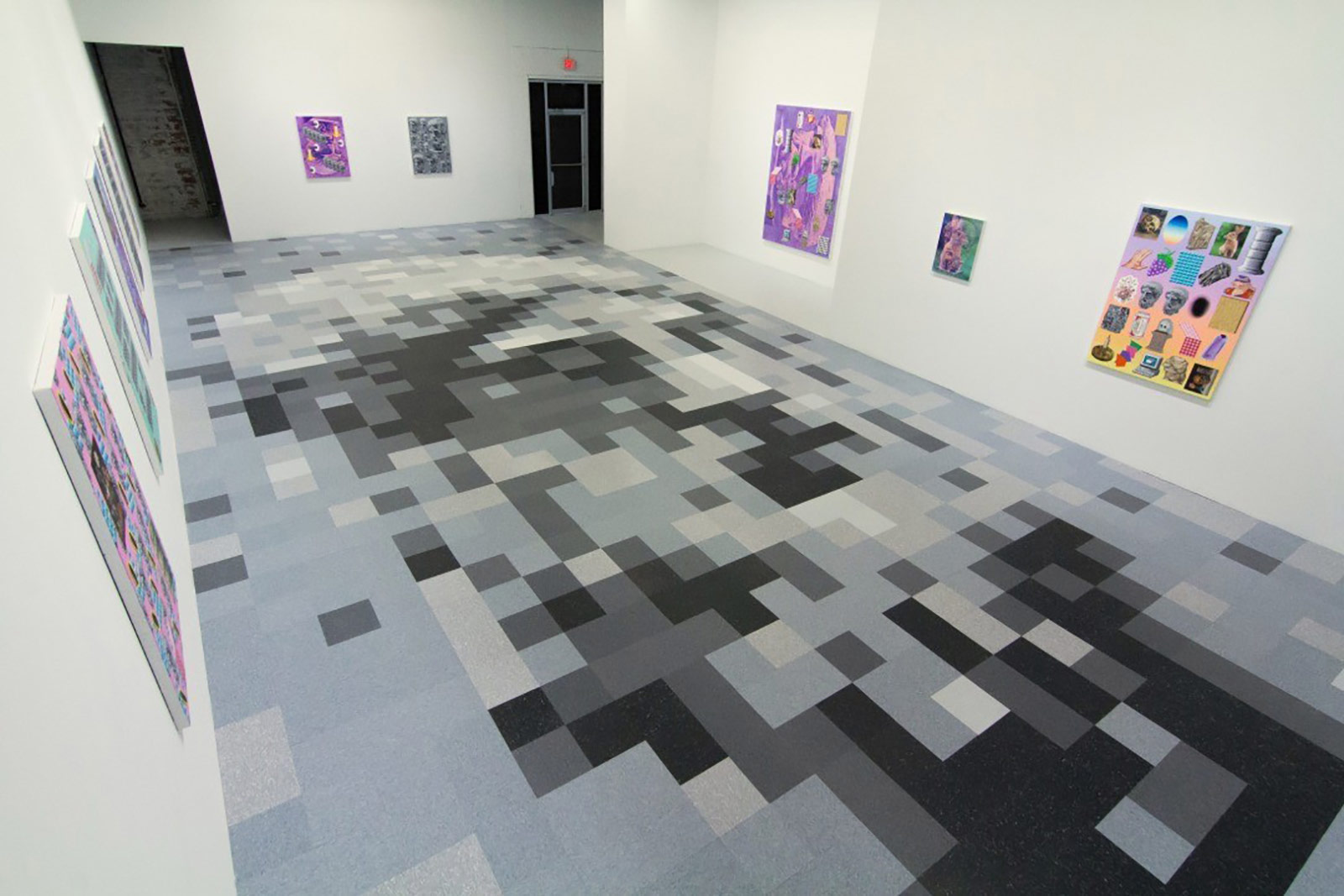