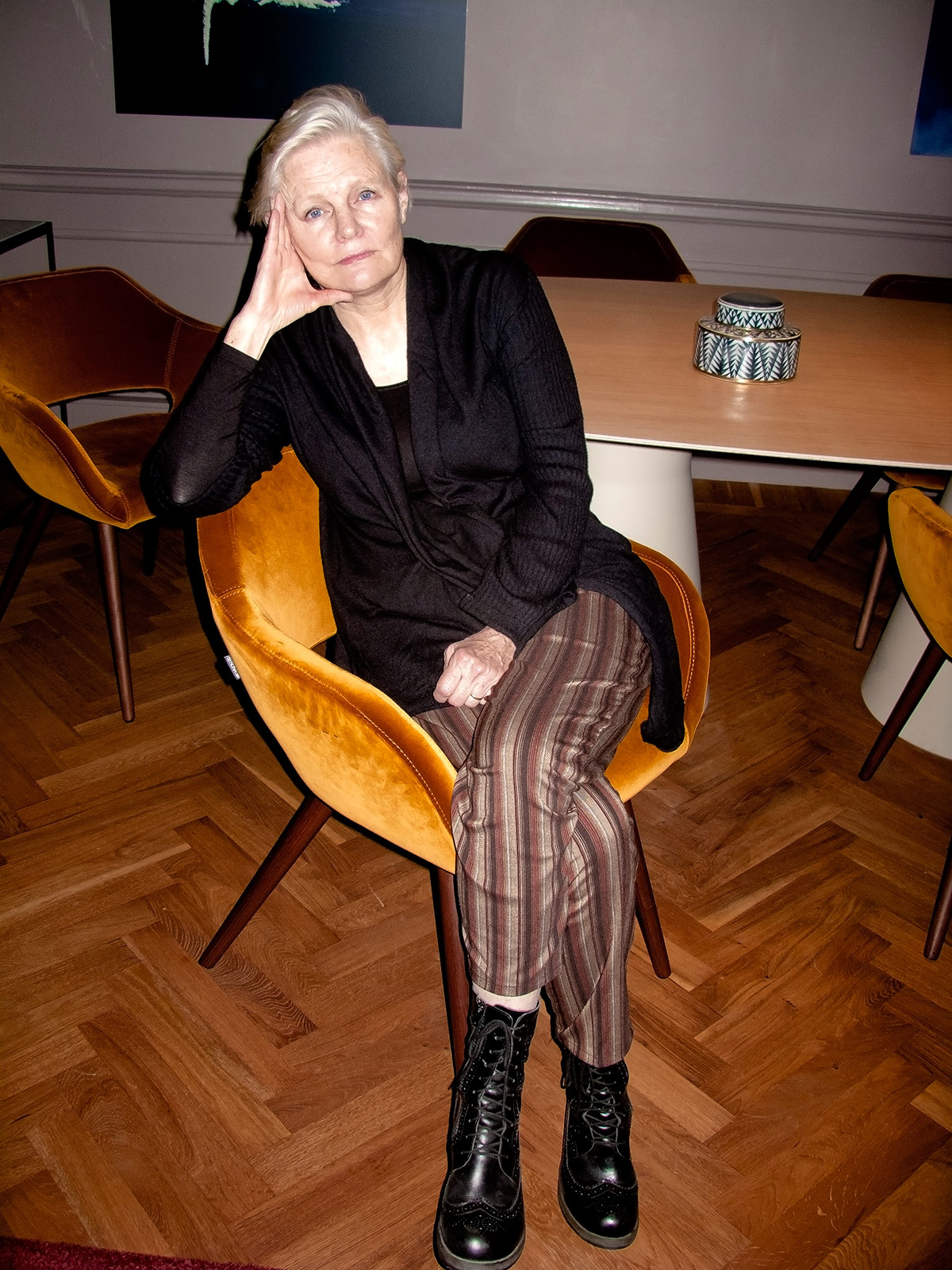 Canadian director and screenwriter Mary Harron is one of those film directors in Hollywood whose name isn’t as instantly recognizable as its male counterparts, but her work receives the popularity it deserves. Despite having directed cult film American Psycho or worked on TV series like Six Feet Under and Alias Grace, she’s better known for telling female stories, as she proves with her latest film, Charlie Says, where she explores the psychology behind the three women who killed in name of Charles Manson.
The actual relationship between all of her films is Harron’s pursue to depict controversial personalities, finding angles in the story that haven’t been told yet. Soon, her new feature film, Charlie Says, will hit theaters internationally. The film focuses on Charles Manson’s murders rather than on his figure, and explores the humanity of the three women in prison who killed for him in 1969. To top it off, Harron was this year’s winner of the prestigious Lifetime Achievement Award at the Stockholm International Film Festival, where we sat together to learn more about all her awe-inspiring collection of achievements.

Harron started off as a music journalist for Punk Magazine, a sort of zine recognized for its feminist approach, which embraced female writers, artists, and photographers. She did the first interview with the Sex Pistols ever published by an American publication, as well as with many other bands that crowded New York’s underground punk and post-punk scene during the mid-1970s, when she moved there. But cinema took over, and she’s already working on her next feature film – soon, she will be in Cadaqués (Spain) filming a biopic about Salvador Dalí.

First of all, congratulations on your Lifetime Achievement Award.
Oh, thank you!
I think you attended Stockholm Film Festival for the very first time in 1996?
Yes.
That year, you presented I Shot Andy Warhol. Just briefly, how do you see that part of your career nowadays?
That was my first movie, so actually, I had no idea what to expect – everything is new and you don’t really have expectations. I didn’t quite register what a big thing it was [to make a movie]. It was wonderful and quite more innocent, a bit like magic. It’s a wonderful thing when your first film gets a bit of affection. In a way, your life changes overnight.
Do you mean your routine changes?
Well, just how you see yourself in a place in the world and the possibilities that are open to you. I think I had a fortunate experience with my first film. But at the same time, it doesn’t mean that everything really changes. It’s just as hard to make the next movie because it’s a lot of struggle. You make your first film, it goes well, and you say: “Oh, that’s it, I’ve arrived.” But that’s really not true. In some cases, the struggle just begins. 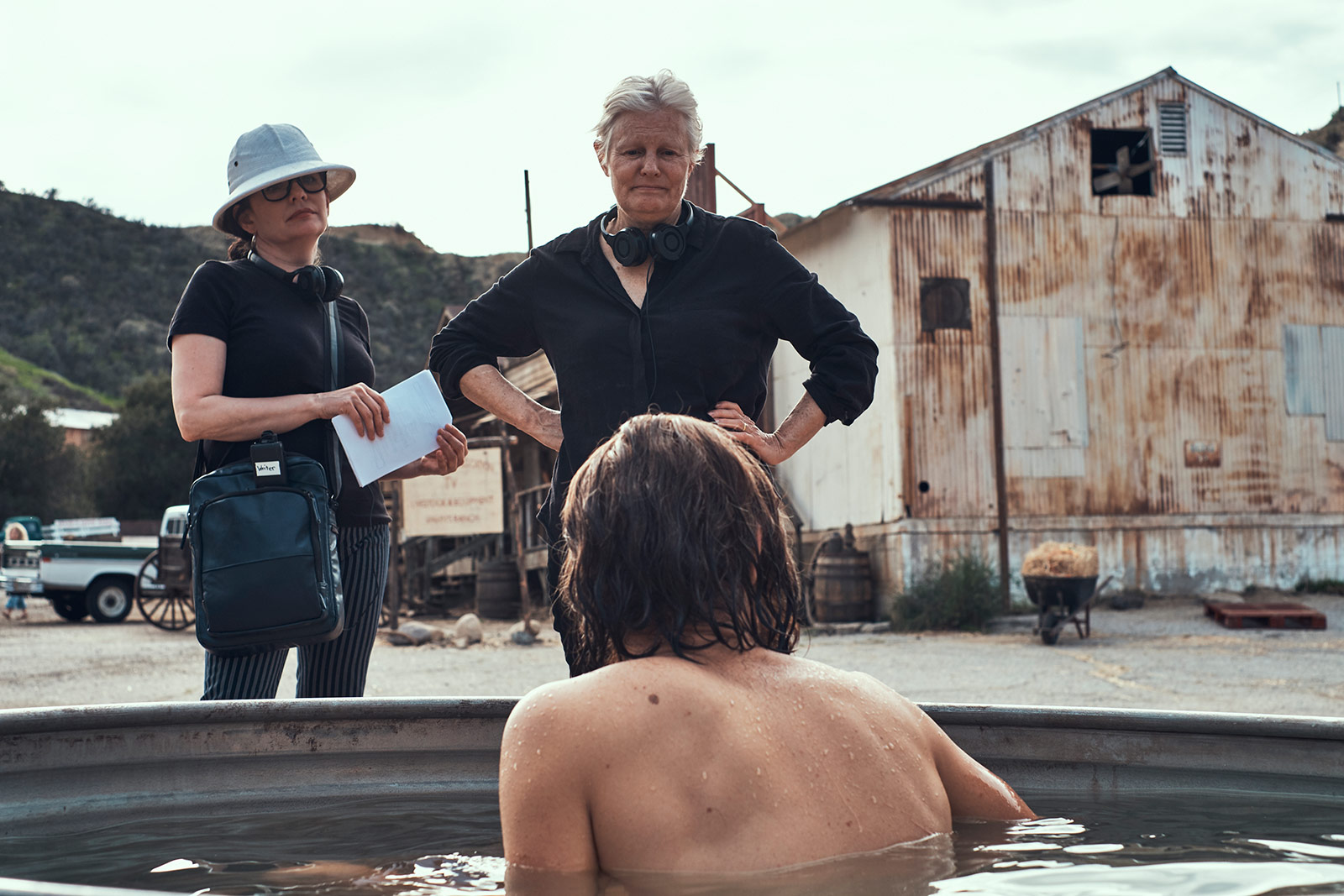 How did the idea of making that movie around Warhol come about?
For many years, ever since I was a teenager, I was very fascinated by Warhol and the Factory. I had read about Valerie Solanas, this crazy woman that shot him. When I read her manifesto – found a copy in a bookstore – I was amazed by how brilliant she was. She did this crazy action but she was a very brilliant woman. I wanted to know what happened to her, who she was – she’s a very mysterious figure. The first impetus was this kind of quest, to find out the real story.
You never happened to meet her personally, right?
No, I had no idea where she lived – she was living in a welfare hotel.
I would like to go yet a bit further back in time. I’ve read you started off as a music journalist.
Yes.
Basically, because of living in New York in the late 1970s, you stumbled upon this vibrant music scene at the time.
It was an accident it happened to me. A couple of people who were starting Pop Magazine, we went together to the club CBGB’s, where everything was happening – very small world at that point. Punk by then were just a few people in the club.

“It’s a wonderful thing when your first film gets a bit of affection. In a way, your life changes overnight.”
What bands do you remember working with especially?
Television, Richard Hell, Talking Heads – I was friends with them, I still know them. The Ramones, of course. John Cale – I always loved the Velvet Underground; he did the score for my first movie and for American Psycho too.
How would you explain the connection between 1950s Beatnik poets with the sort of punk, no wave scene at the time?
I felt there was a huge connection. The 1970s underground rock stars were the bohemians of the ‘50s. Richard Hell or Tom Verlaine were poets in their early days. Everything was happening in downtown New York; people like William Burroughs were around it, and there was this connection between the Beatniks and Warhol’s Factory, with the Velvet Underground, etc. The first time I went to CBGB’s, Lou Reed was there.
Although you are currently presenting your latest feature film, Charlie Says, you are the winner of this year’s Lifetime Achievement Award for your career as a filmmaker and screenwriter. What does this award mean to you at this stage of your career?
It’s a great compliment. It’s a validation of what I’ve done so far. When making a film, you just focus on the struggle, so [this award] is a validation, like I said.
Does this validation encourage you to make more movies or not necessarily?
It’s absolutely an encouragement, not a waste. Making movies is always difficult. I think that what you want is people to remember or still watch the films years after you’ve made them. 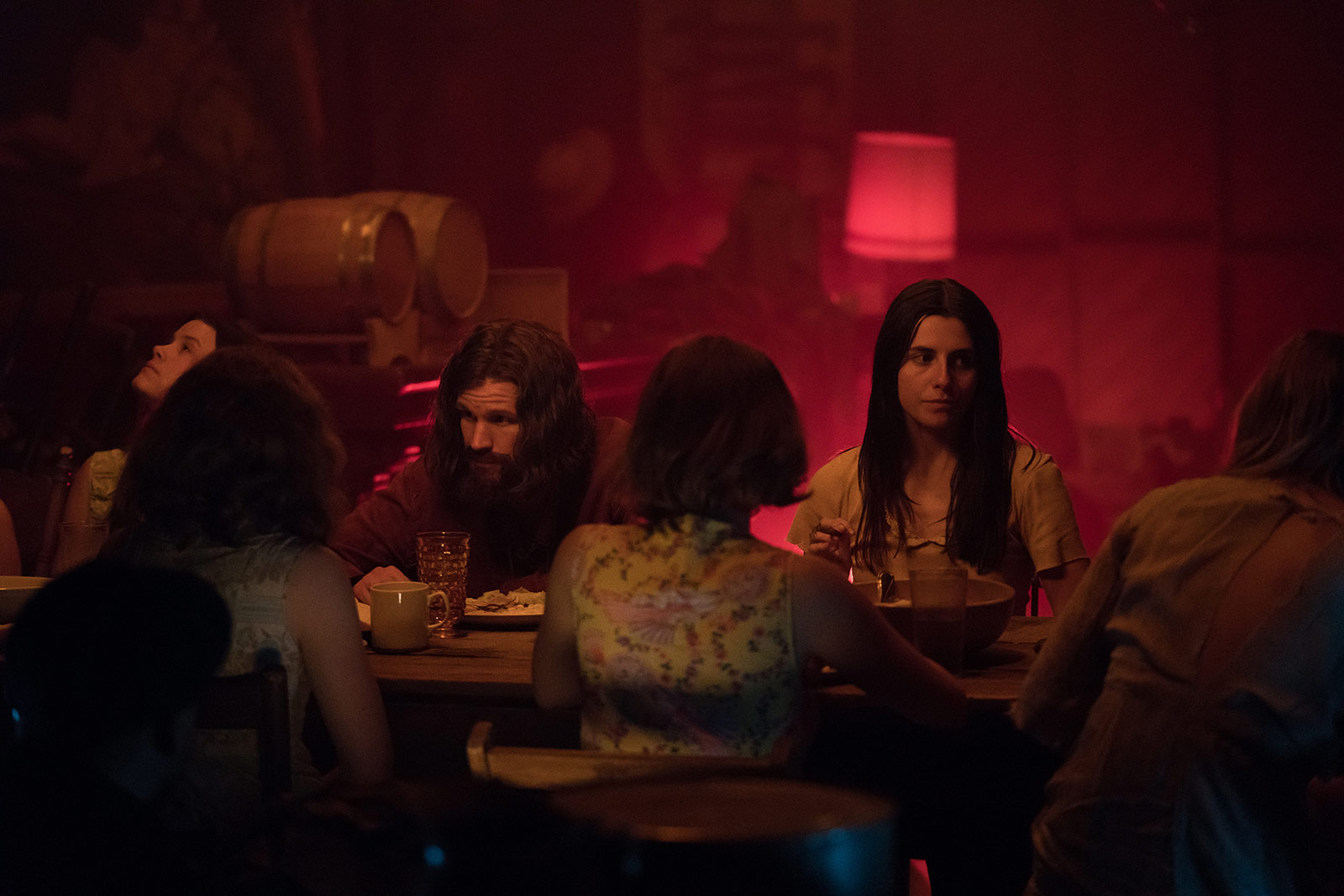 I think Charlie Says is your third feature film working together with Guinevere Turner. What would you highlight about working together again?
I think we have a very good rapport. The most important thing in any collaboration is that you see the subject and the story in the same way. We have also the same sense of humor, and we are interested in the same things, I believe. I think we are feminists but we like contradictions.
What kind of assets does she bring to a project otherwise probably not happening?
I think the project would happen anyways. I work with my husband too – to me, working with people with whom I have a strong connection makes everything more exciting.
When The Hollywood Reporter announced Tarantino’s new movie about Charles Manson, many people reacted negatively, asking why does Hollywood insist on hyping this kind of characters. What’s your take on that?
I don’t fully understand that. Manson is such a huge part of recent history in the United States; it is part of public mythology. I haven’t seen Tarantino’s film yet but I think it’s more about Hollywood, and that’s an interesting subject because Hollywood was changing in the ‘70s, so I think it will be very good to see how it was.
I’m sure it will. But my point was more related to the fact that many people reacted negatively to this theme.
People can think you shouldn’t make films about this subject (or others). But it happens, people talk about it, so why shouldn’t you make a movie? There’s no subject off limit, I think. 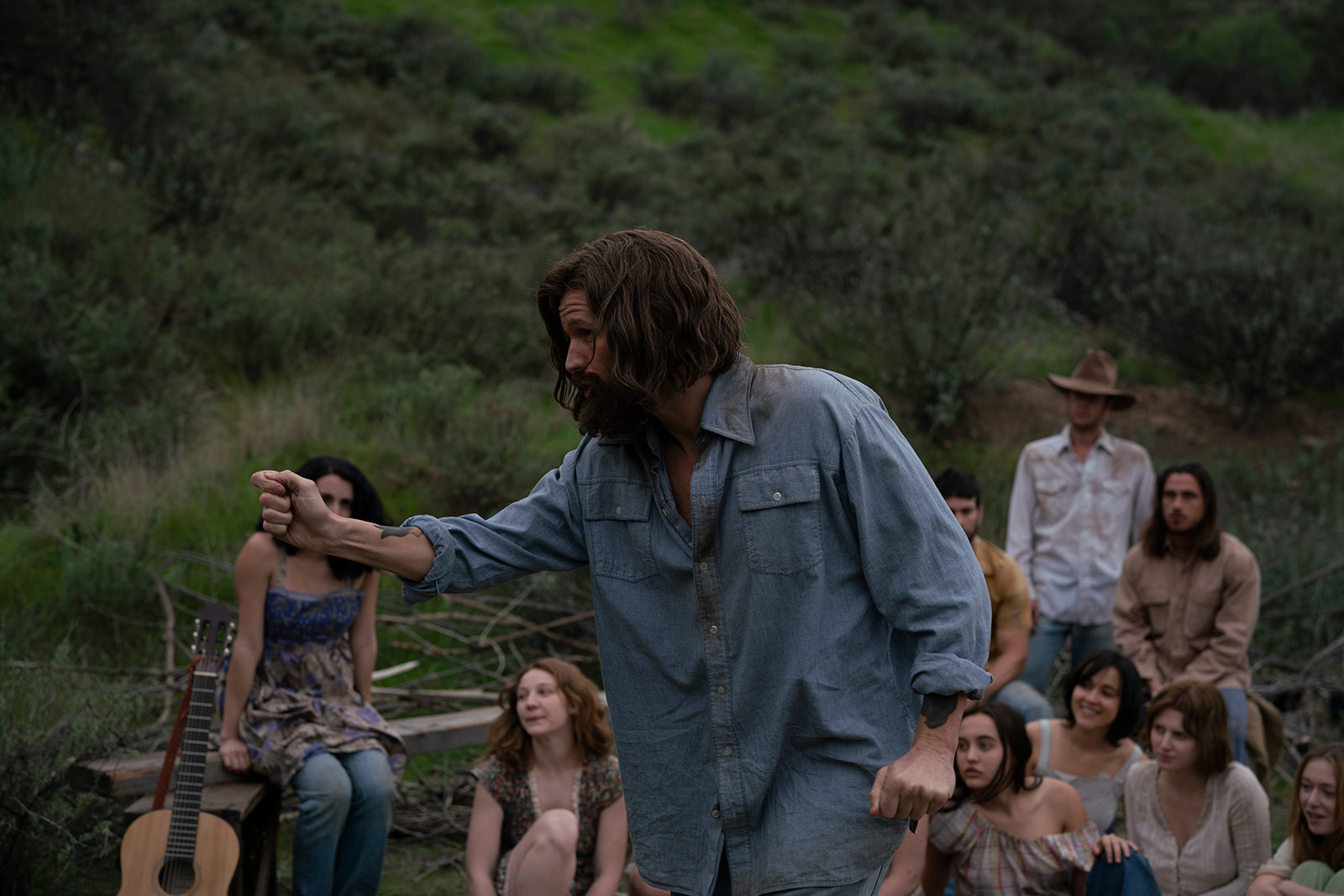 Recently, The New York Times has published an article corroborating that there were three more women followers to the Manson family in addition to the other three that are in prison and who killed for Charles. Has anyone from the team of the movie been in contact with any of them? Or would they feel uncomfortable, as if they were turning these women into celebrities?
Victims – they feel this regret and it opens up those wounds, I guess. The people in prison are not allowed to talk to us because that would impact their parole. Guinevere spent a lot of time with Carline, this woman who gave classes to the Manson girls, but we couldn’t talk to the girls themselves. There’s so much written already about the story and about them, I felt I didn’t need to meet anybody.
You like to tell female stories with women in the lead, generally. Could you please elaborate on this?
Not always! American Psycho, of course, or my next movie, which is about Salvador Dalí; those are more about a guy. Obviously, as a woman, I mention certain stories that haven’t been told, or I’m interested in an angle of the story that hasn’t been told. In Charlie Says’ case, no one had made a film about these women that really tried to understand them. There were a couple of movies, but I felt they never really got to the heart of the cult, its dynamics, and how these women were persuaded to do these things.
I’ve read Charlie Says focuses on the consequences these women suffered after they had committed the murders. But what is the main thing you wanted to explore?
I think I wanted to see their humanity. I was scared of the Manson girls myself. I grew up seeing this sort of crazy photos of them – they’re like a symbol of crazy cult followers. But when you deepen into the story, you see them much more sympathetically – not trying to discount the terrible things they did, of course. I just wanted to recognize their humanity and understand how they did become so dominated and brainwashed. It’s a disturbing thing about women and the human capacity that someone can overtake their will.
Why do you think this happened to women mostly?
Well, most of the actual killing was done by Tex Watson, a man. They had male followers as well, but they were mostly women. A Manson thing is that he had been a pimp and was very good at manipulating women – working on their vulnerabilities and their insecurities. In many ways, he was a total loser but had a real gift for manipulating them.