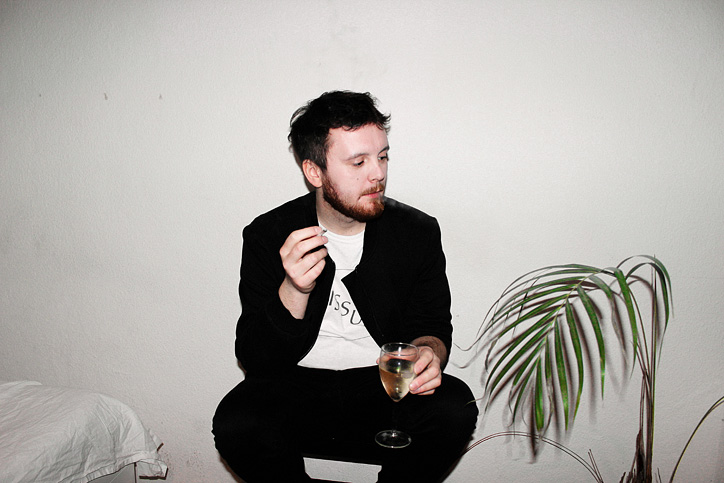 A Lovers Discourse/ A Lovers Disco captures a moment in Petersen’s life when lovers and friends were interchangeable. When questioned on the subject, the artist described polyamory as an idealized concept that “doesn’t really work”. With monogamy not really working for him either, you cannot help but wonder what is left for Petersen; through his words he reminds us that you’re born alone and you die the same way. And with beautiful irony he tells us how he lost three years’ worth of work when his Macbook got stolen on Valentine’s Day, of all days. In this tumultuous relationship with Love, who will prevail? He lights his cigarette with a single match and so our conversation begins…

I grew up in a small town in northern Germany. During my teenage years I would experiment a lot with electronic music, I then moved on to more visual aspects. I would use photography to document the important periods of my life. I later elaborated on this in my studies in graphic design and photography at the University of the Arts in Bremen. From there it evolved into something more solid. I did some work with the graphic studio Cabinet Gold van d’Viles, a company that I started along with 4 friends back in 2011 in Bremen. We also did a lot of art books and museum catalogues which then led me to Sova Magazine.

How did you come up with the title, A Lovers Discourse / A Lovers Disco? Do Roland Barthes’ writings have particular significance to this project?

Of course, he had a lot of books on the topic but it was A Lovers Discourse that specifically had a lot of impact on this project. During the curating process of my photography class with Peter Bialobrzeski, I came up with the title and the concept for this particular autobiographical work… it’s about friendship and also about the life around relationships…it was also very influential to me and my relationships at that time. It’s really good book! I’ve read it four times or something like that… In German and in English.

Can you describe in a little more detail, the “non-moralist and post-romantic language of love” that inspires you?

As the book A Lovers Discourse focuses on the common fragments of the language of love, not just today but also in the past, I wanted to focus on a language of love that goes beyond the ongoing standards of today’s society and romanticism… One that has more open boundaries and truly gives a shit about moral standards we have today (who needs them anyway?).

How would you describe polyamory to someone that has never heard the term before?

Ok, personally I don’t like the term polyamory to describe the opposite of monogamy; I think it should be polygamy. Polyamory for me implies that it’s totally working and possible to love more than one person at the same time with the same amount of feelings. I think that is complete hippy bullshit because it doesn’t really work. Me and my friends tried that idealized concept in our early youth- it never really works to love two or more people the same amount at the same time…there’s always somebody who’s not happy. So it’s more like polygamy.

Would you say that jealousy is one of the main factors that contributes to it not working?

Yeah, definitely. It’s hard to pretend that you’re so cool and you don’t care. In the end everybody wants to have somebody to hold them. Even if you have an agreement. It’s still lacking... But then again, this is also one of the factors to monogamy not working, it’s the same.

So what is polygamy to you?

Polygamy is when a person has multiple sexual partners…and to that you can also have an agreement to have a love bound relationship with somebody… It’s not easy. For some people it works but then again maybe their expectations for that relationship are not high.

I’m interested to know, what sort of feedback do you get from your project generally?

I think a lot of people generally don’t know the concept or read about it. They just think, oh my god, shocking photos, here is a penis, whatever, there is a lot of blood. They don’t see that it’s about an exploration of all of the things that are not normally shown. It’s a conceptual thing.

How does the scene in Berlin compare to other places you have visited? Berlin’s arty and experimental vibe seems to be particularly fitting to the project.

What inspires you to photograph?

A lot of things. Art in general, travel, expression and melancholia. Photography doesn’t really inspire me because when I see other people’s work I just think, oh shit- they are so good. When I feel melancholy I want to break out of the feeling and in the moment it’s good to do something and to find a new way to express yourself.

You have stated that your project is autobiographical and your photographs appear to be care-free and of-the-moment. Does any forethought go into the images or are they all spontaneous?

Most of the photos are taken spontaneously, some are not. It’s interesting to let the viewer interoperate it in their own way. Some people are convinced that a certain photo is staged when I know it’s not so I just give them a smile… I also have photos that look like they are of-the-moment when they are actually not.

Do you have a preference?

It depends on the kind of photos that I want to take for that specific series. For this series, the spontaneous photos really do take themselves, maybe they’re not as perfect but they tell a story. Not as much thought goes into the arrangement because I don’t want it to look fake. When it comes to other series, like fashion, it looks better staged.

It is also true that your images are often graphic and occasionally feature violent or extreme imagery. Do you ever feel like there are certain boundaries that shouldn’t be pushed? Has there ever been a photograph that you thought twice about publishing?

Yeah so pushing boundaries was also part of the concept but of course certain boundaries should not be pushed, even though there are very few left in my opinion. I think any non-consensual violence or non-consensual humiliating and degrading acts should never be viewed as something worth experiencing or even enjoying. That’s not what I’m doing and that’s not what I’m trying to promote. Considering the aesthetics of the image, there are some things that just never look good. If you ever try to photograph shit for example, it’s always going to look like shit.
There have been photos that I haven’t published, but that’s just because I don’t like them or maybe someone has asked me not to publish them.

In your opinion, what are the downfalls of a monogamous relationship? Can you say from personal experience?

Of course I can only say from personal experience, I’m not like a scientist on relationships so I can only tell from my own experiences. It mostly falls down when it comes to sex or the absence of it. Sex plays a big role in relations as in many other parts of our life, in friendships for example… It doesn’t just have to do with getting bored by others, even though that sometimes is the case too. In the end you should always remember that you are completely on your own, the only person you can rely on is yourself and you should stop projecting things that aren’t there onto other people.

Yeah I think the first moments of romance are enjoyable without having to put too much pressure on it. I mean, I can enjoy cliché romantic happenings with lovers and friends but in the end it’s not like there’s someone there to rely on every day and to be there for you…of course it would be really sad if romance did not exist at all.

How do you think apps like Tinder have affected our dating habits? Have you ever downloaded it onto your phone?

Yes of course. I feel as though I’ve grown up with the internet, it’s always been a big part of my life. As a child I was always very shy, I didn’t have that many friends in real life so I always made them on the internet. I’m used to meeting people that way. Maybe not so much anymore, I meet them at places where we share a common interest or somewhere where we both like to hang out, concerts, parties etc. I think the internet is also pretty real, if you message your friends over Facebook and you meet up, I guess that’s kind of like making a date over the internet. It’s fine, it’s just a means of communication. In 2006, OkCupid came out and I still like it a lot more than Tinder, despite not being that active on it right now. It’s good to meet lovers or friends or just interesting people. I think Tinder is fine if you just want to find someone to fuck 2 or 3 times, but mostly that’s all.

Do you think polygamy will ever be the societal norm or something that just co-exists with monogamy?

I don’t think it will be the norm. It will co-exist and it will grow, especially in Western culture where we’re more open and liberal to these forms of loving and living. I don’t think monogamy will ever die but on the other hand, archaic forms of living and clearly sexist gender roles are on the rise again. I think it’s important to actively show that people want to do better and move forward.

Well my Macbook which held my entire backup, got stolen on Valentine’s day earlier this year…

Oh no! That’s kind of ironic…

Yeah so I have to re-scan and re-edit all of my work from the last three years. It will be a long process due to having little time after work but it’ll be totally worth it. After it got stolen I thought, ok you have make something out of this so I want to publish my series A Lovers Discourse/ A Lovers Disco into a solid, well-made photobook and do an exhibition. The project is 2-3 years old now so I’m ready to move on to further series and projects. I have other projects in the works including another autobiographical series that I’m not ready to talk about just yet, but it’s about some other big parts of my life that I haven’t explored artistically. Besides my photographic work I also run the independent photography and art magazine called Sova, which will also publish its 6th issue at the end of April. 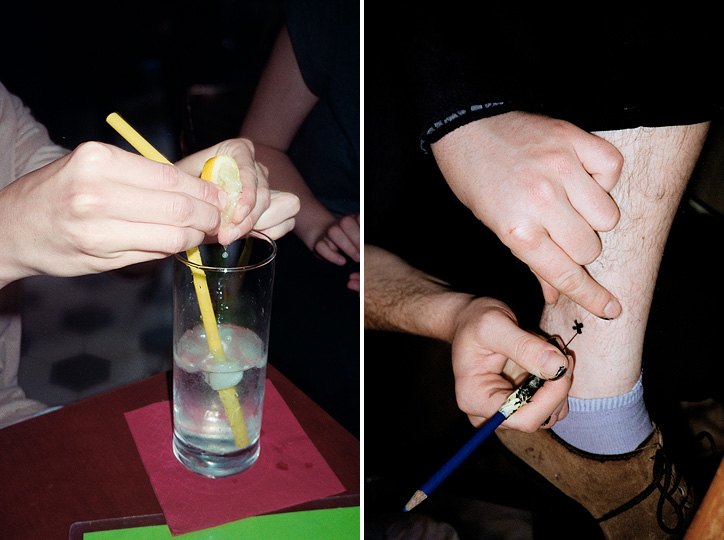 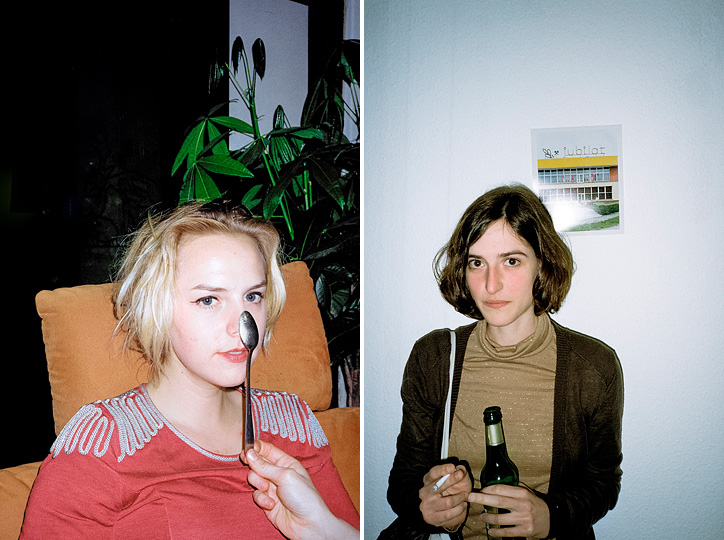 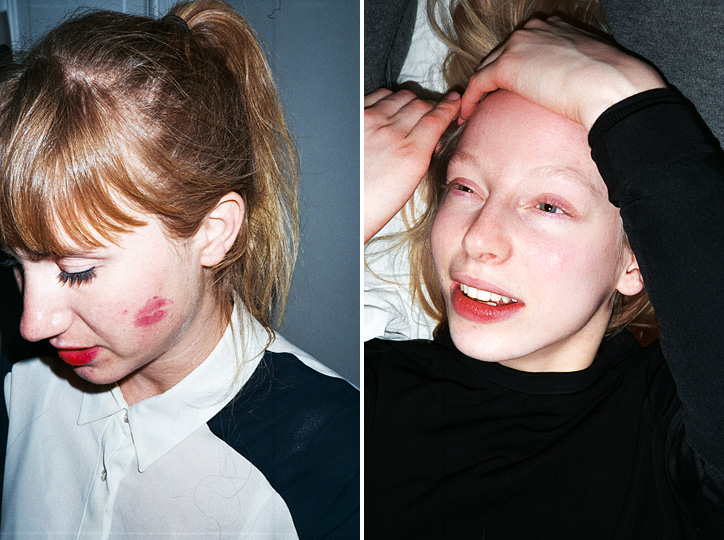 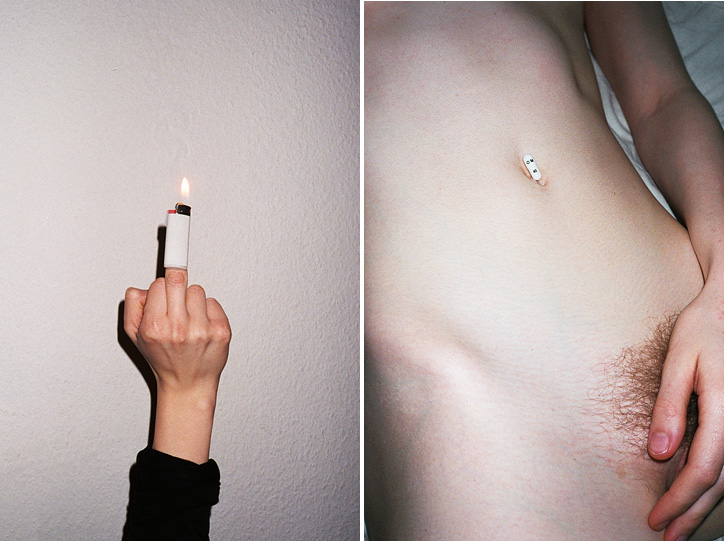 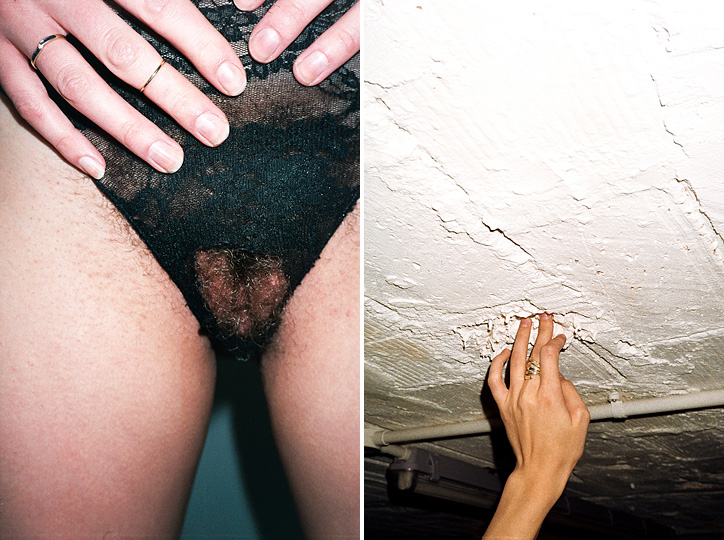 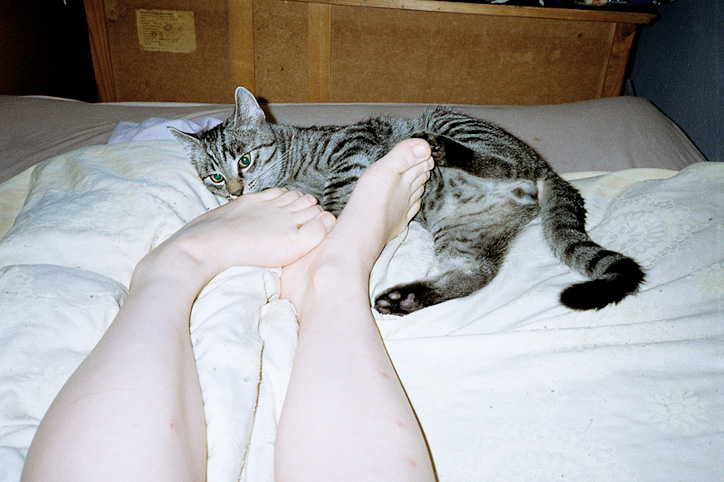 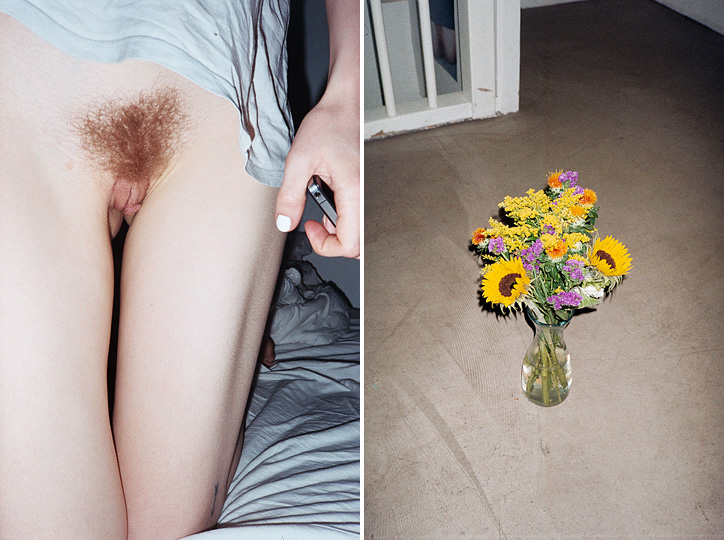 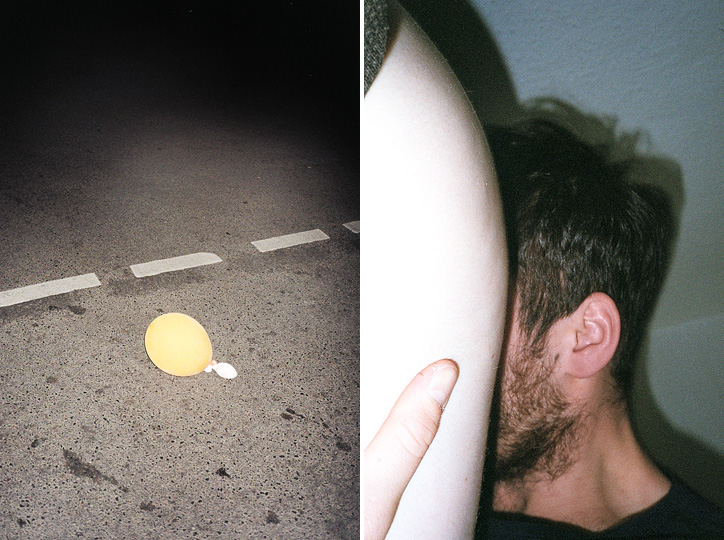 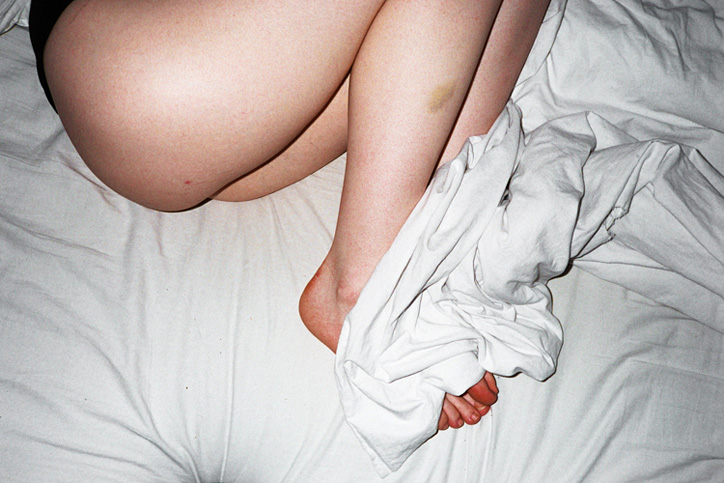 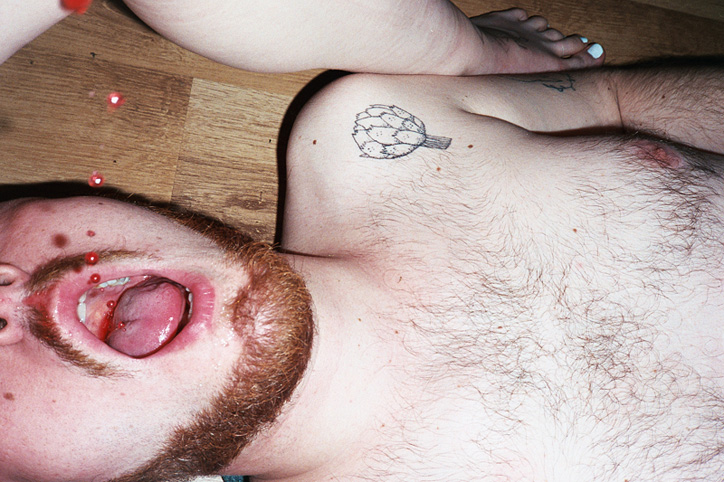 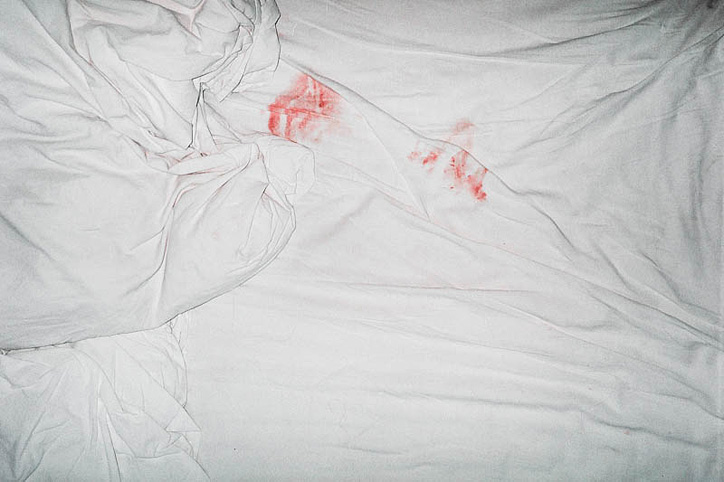 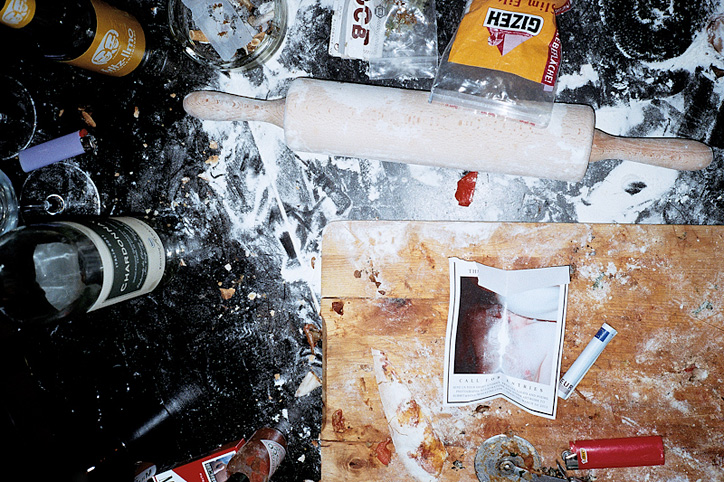