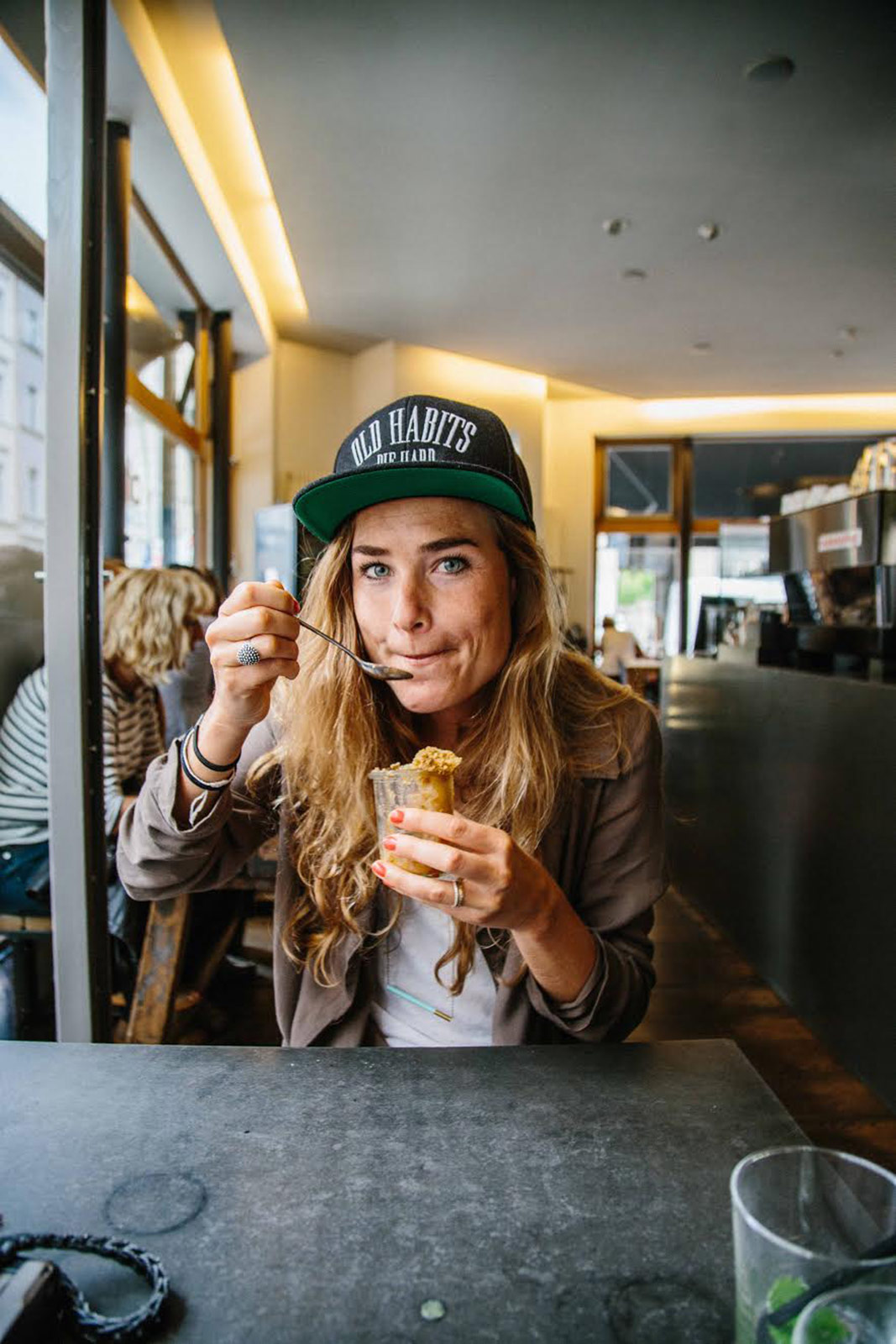 Life is pretty good and there’s no need to take it too seriously. Marjolein van der Klaauw captures people in an utterly relaxed state of being. On the beach, in the streets, every photograph depicts a genuine moment. She’s the perfect example to show that you don’t have to study something to become something. With a background of cultural studies and a huge interest in the why’s and how’s of life, she has a pretty good package deal going on as a successful photographer. The Berlin-based photographer is following her dreams and continues to dream big.
At what age and how did your interest in taking photos start?
I started taking photos when I was travelling through South and Central America. On my 21st birthday I got a camera, which made me take photography more seriously. However, at the time I was still busy with European Studies, so I didn’t really focus on it that much. I did consider studying at the Fotovakschool in Amsterdam, but I wasn’t really interested in the technical side of photography. I just wanted to capture interesting people around me —did I really need to study for that? I want to tell a story visually, from my point of view. With an interest in people and cultures, I decided to study Cultural Anthropology and Sociology of the Non-Western Society. One of the subjects I chose was Visual Anthropology, where it's all about documenting cultures and people through film and video. Finally I could combine my interest in people and photography by capturing them with my camera. After Amsterdam, I went to Australia to develop my creativity. I ended up doing a very intensive study of graphic design at the Shillington College of Melbourne. I remember listening to a very inspiring Polish/American photographer once at a design event that we attended. Her photos and stories were amazing; she captured life around her with this tiny analogue camera that she always carried with her. I wanted to be her, I wanted to capture life just like she did, I wanted to inspire others by shooting people and their cultures with a little camera —that was my dream! Convinced and excited as I was, I walked up to her after her talk to ask what camera she used. The next day I bought this little friend, the day after that my photography style was born and a year later I had my first exhibition.
What have you learned during your studies that you are still using in your work now?
Observing, observing, observing. My study Cultural Anthropology and Sociology of the Non-Western Society taught me to become even more interested in people and cultures. I talk to locals when traveling; I get to know their culture and habits, whilst always carrying my small camera in my hand. The people around me inspire me, whether it's the local farmer in a little town in Italy, the hairdresser from Tony and Guy or the lifeguard at Bondi Beach. Even my mom, my neighbour and my friends —I just have this huge interest in cultural diversity and the why's and how's of life.
When was the moment you felt comfortable enough to call yourself a photographer?
Since I have never really studied photography, apart from a couple of basic courses, I found it difficult to call myself a photographer. For my graduation at Shillington College in Melbourne we had to design a website, a portfolio and a business card. I realised I didn’t want to become just a graphic designer on a professional level; I also wanted to be a photographer. However, having this written on my business card wasn't enough to feel comfortable. It still felt like I needed to have a degree in photography or a bag full of technical skills. Luckily, I got enough trust from people within my network, so I learned along the way. I just did the jobs, experimented with different lenses, clients and occasions. I became more and more confident as an autodidact. These days, there is a fine line between amateur photography and professional photography. When I realised I was making a living out of this skill, and people started approaching me because of my style, I felt comfortable enough calling myself a photographer. 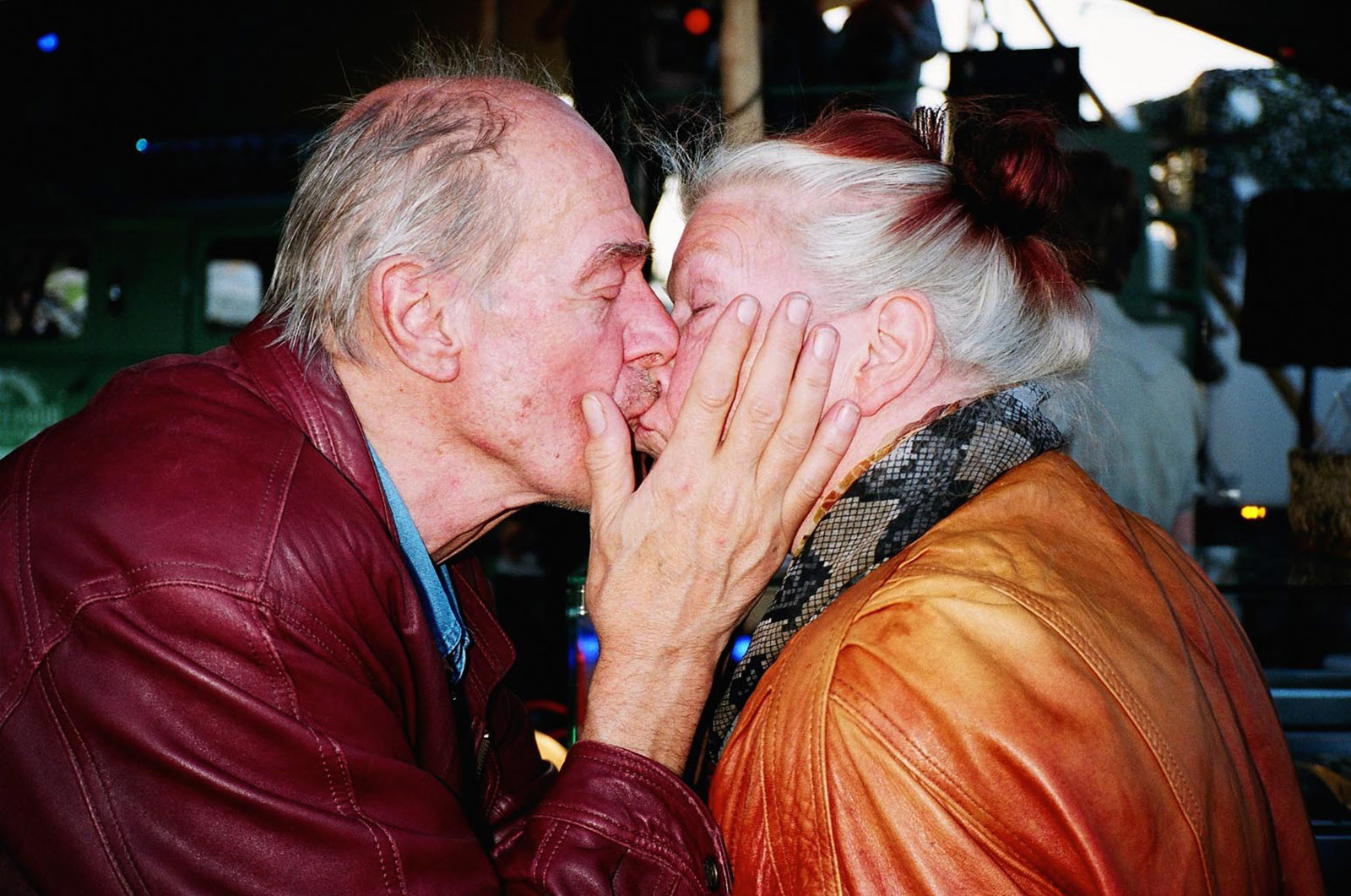 You are part of the New 2016 book, a book of photography magazine GUP to celebrate Dutch photography talents. How is it to be recognised for your work?
Absolutely amazing! It has always been a dream of mine and now it became reality. Being recognised as a Dutch talent feels amazing. It kind of felt like "I told you so". You don't have to study something to become something. You just need to want it really bad, stay focused and trust your gut. Follow your dream and dream big. Being recognised for your talent doesn't mean you’ve reached the top, you still need to keep pushing, but it's always nice to have a little boost and confirmation from the outside. Things like these make me realise why I do what I am doing.
Do you prefer shooting people you don't know or do you rather work with friends, on a more personal level?
Commercially, I love shooting people that I know. It makes me feel comfortable, which adds up to a better focus while working. However, shooting random people is always a nice challenge. Will I make them feel comfortable? Will I be able to make this stranger smile? It’s learning while doing! For my analogue photography I rather shoot people I don’t know. The foreigner, the other, the one who attracts my attention because I’m curious about their story.
How do you approach the people you shoot whilst traveling, for example in your Beijing series. Do you do research into the culture in order to know what is appropriate?
I don't do research into the culture. I probably should, but I don't. It's just this gut feeling. If I don't feel comfortable shooting a person on the street, I don't. If I'm not sure, I will ask local people if it's appropriate to do so. I usually ask the person I want to shoot as well, or at least I always smile and point to my camera when I don't speak their language. I often get away with my smile, by talking to people, asking questions and showing interest, many people are okay with it. Sometimes I pay them a little if they ask, but it immediately feels less authentic. I want to have that natural connection before I shoot. In Beijing they really didn't speak any English, so there I just had to smile away. I remember one guy shouting after he saw me taking photos. That really made me feel bad, but I know how to deal with it now and I try to avoid these situations. I'd rather get a smile back.
In your Ibiza series you shoot people in an utterly relaxed state of being, on the beach during their holiday. How did you come up with this idea?
Having lived in Australia, where the outdoor lifestyle is huge, I started getting interested in life at the beach. I love the beach and its vibe. Whenever someone is on the beach, they feel free. They take off their clothes, leave their worries at home and enjoy the good life. They’re exposed to the sun but also to the eyes of other people in bathing suits. A lot of funny things happen on the beach because of that feeling of freedom. It sets you up for some amazingly quirky and ironic snaps. I love that. 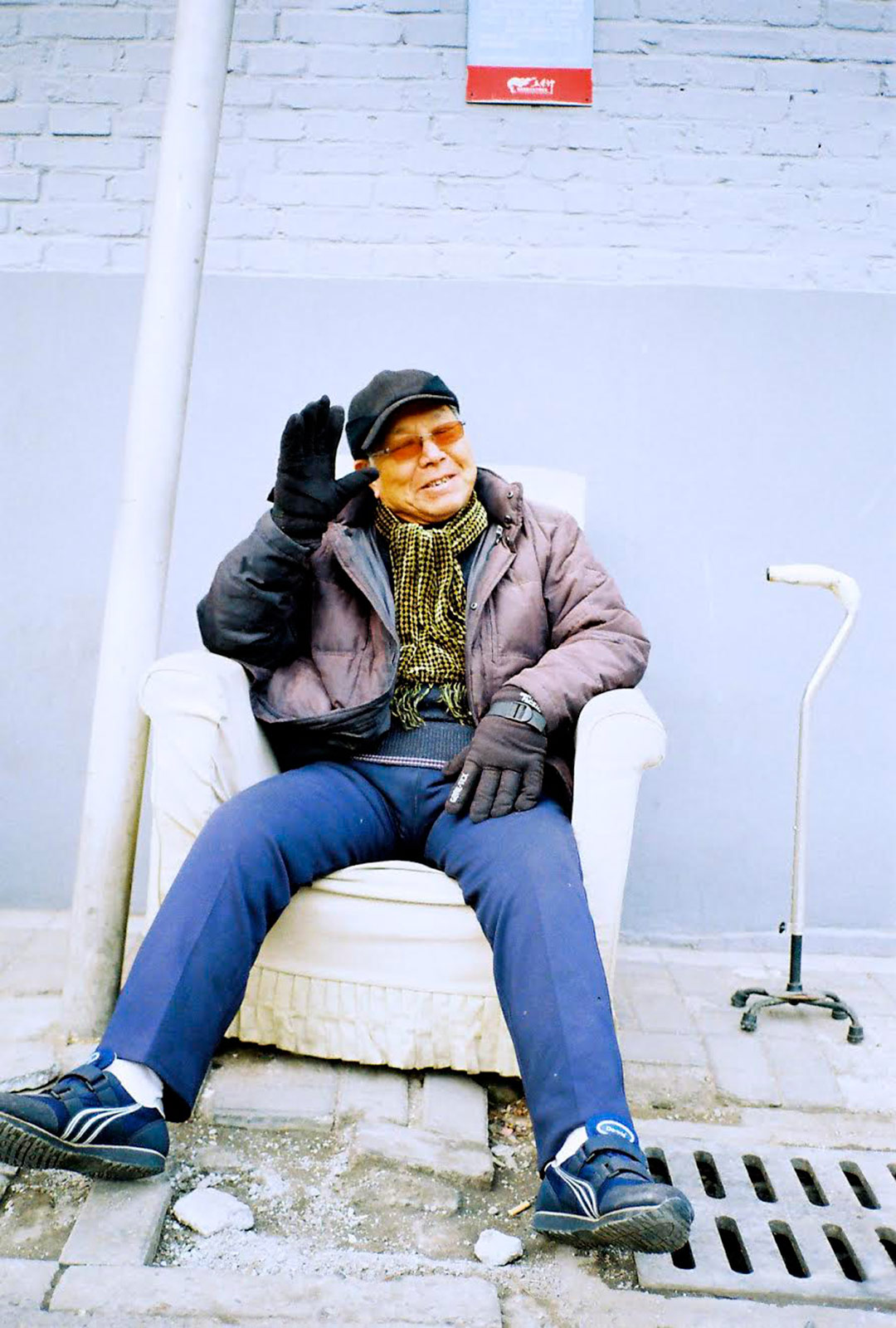 Is there also a certain message you're trying to bring out into the world with these photos?
Not necessarily, I just want to show the quirkiness of life. We shouldn't forget that life can be pretty good and there’s no need to take it too seriously.
You seem to have a thing with people and bodies. What is it that attracts you to the human, more than to, for example, still life images?
I love nature as much as I love people and cultures. However, I think people are visually more engaging than still life. As I explained, for me it’s not just about capturing the person but also the story behind this human being. I like the interaction and the moment as much as I love the photo.
Which commercial work are you most proud of?
On a national level I’m most proud of my cover shoot for Volkskrant Magazine, which is one of the biggest newspapers in the Netherlands. The shoot was of a choirmaster, a really nice, humble man that I shot in Germany. On an international level I am very proud of having been the in-house photographer of the world leading department store Fortnum and Mason. Shooting every Wednesday in their beautiful department store, soaking up the British culture, and finally seeing my pictures online made me feel really happy and satisfied.
You also do graphic work and collaborated with toms for the opening of their store in Amsterdam, for which you designed the word ‘give’ in shoelaces. Can you describe the difference in using your creativity for projects like these, compared to thinking about the concept of a photo shoot?
It's totally different as I mostly do events, weddings, portraits and street photography so I don't really need to think about concept. There will be a moment where I see a visually nice setting and I take it from there —the framing and making use of colours and natural light. It’s all pretty spontaneous to be honest. Graphic design work requires a lot more brainstorming. Making mood boards on Pinterest and researching the client’s industry. Then eventually, the moment will come where you wake up and think, “shit that's a good idea”. And then you just do it. 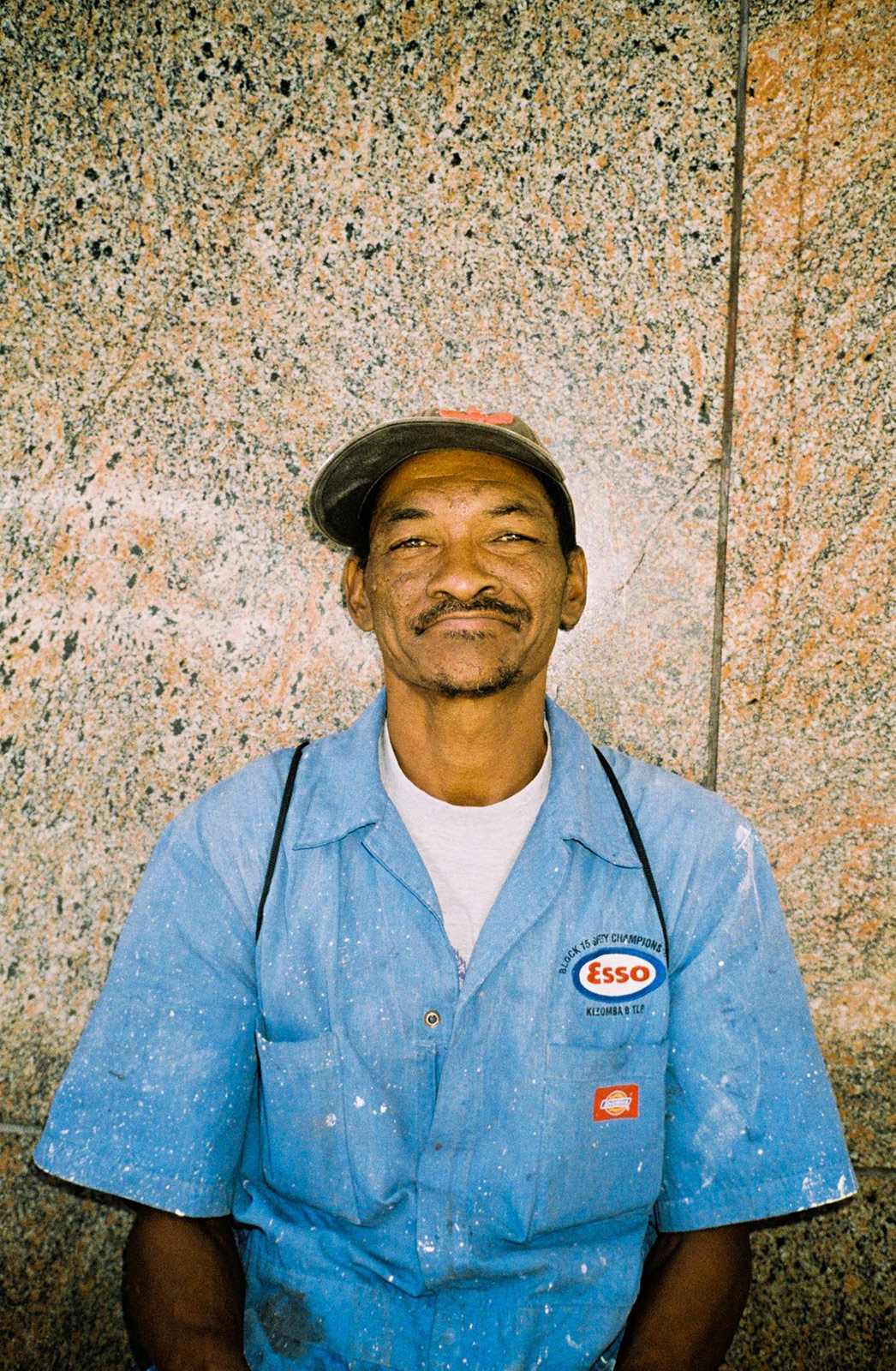 Is there a brand high on your list that you would still like to collaborate with?
Of course, there are many! With my huge interest in cultures I'd love to shoot for National Geographic. If ever I could shoot a series for them, about any culture in the world, I would jump of joy! Commercially, I'd love to work for Nike. I absolutely love the brand and it would be fantastic if they want my style for their next campaign. We need to dream big, right?!
How can people recognise a typical Marjolein photograph.
Colourful, quirky and raw. In-your-face photography.
Do you have one favourite photo or series that you shot?
I love my newest series my body your body everybody. I love to see people on the beach. Everyone is often so happy. It’s also visually very appealing, because of its pureness. The amazing colours and the quirky look, they always make me happy too!
Are there any exciting projects pending for the future?
More and more beach bodies. I’m designing some new book series and I will try and fix another exhibition somewhere! 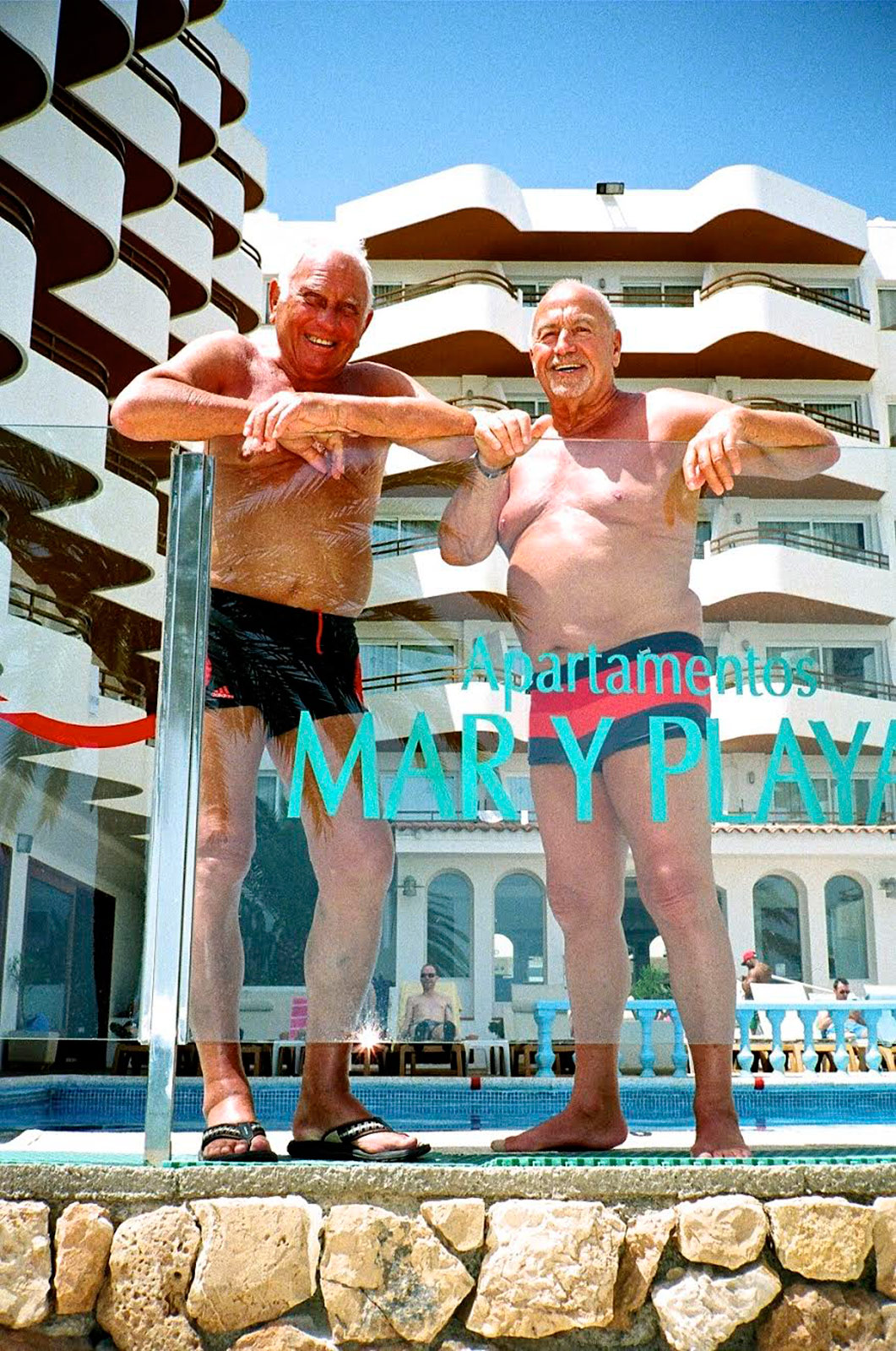 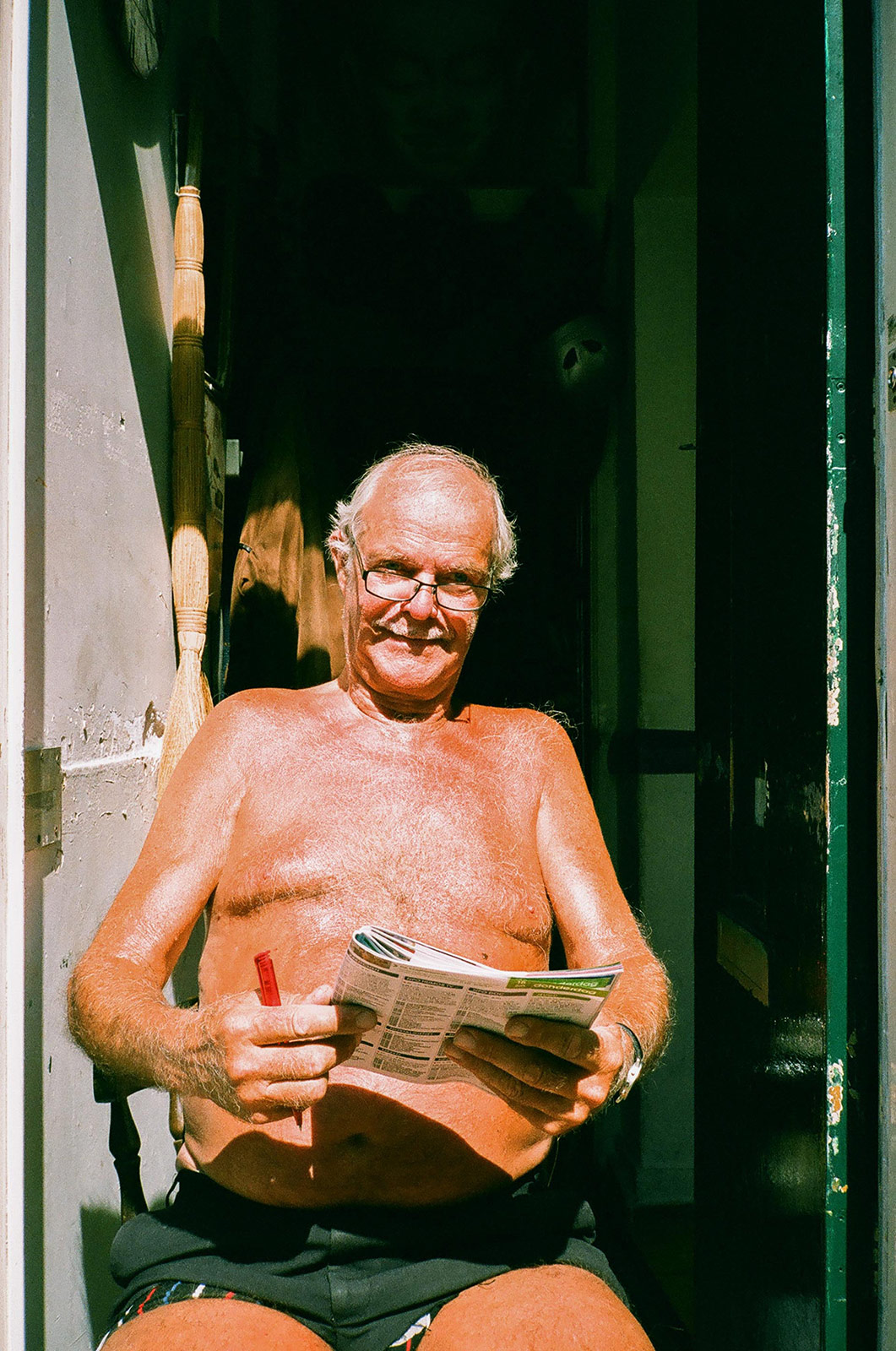 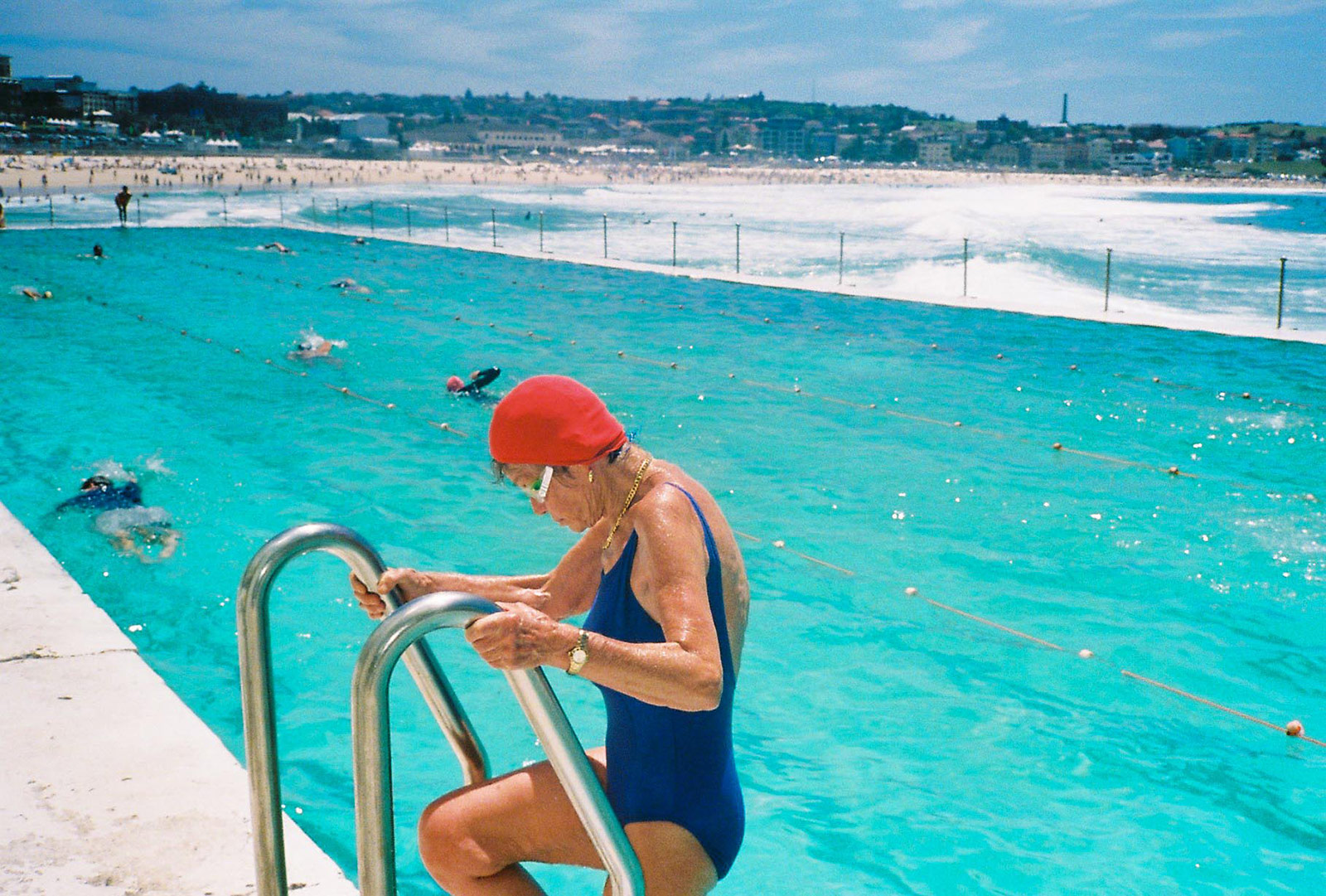 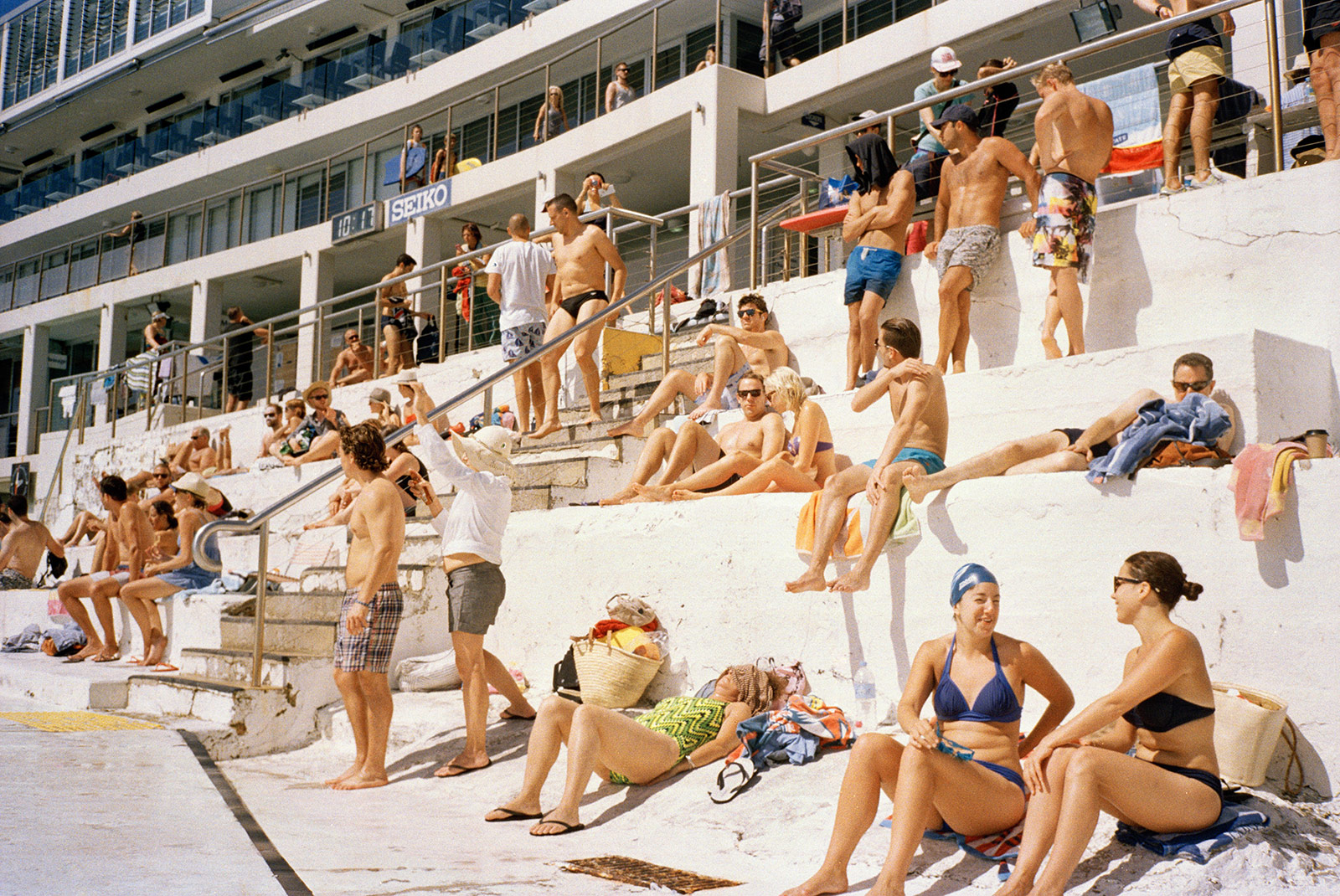 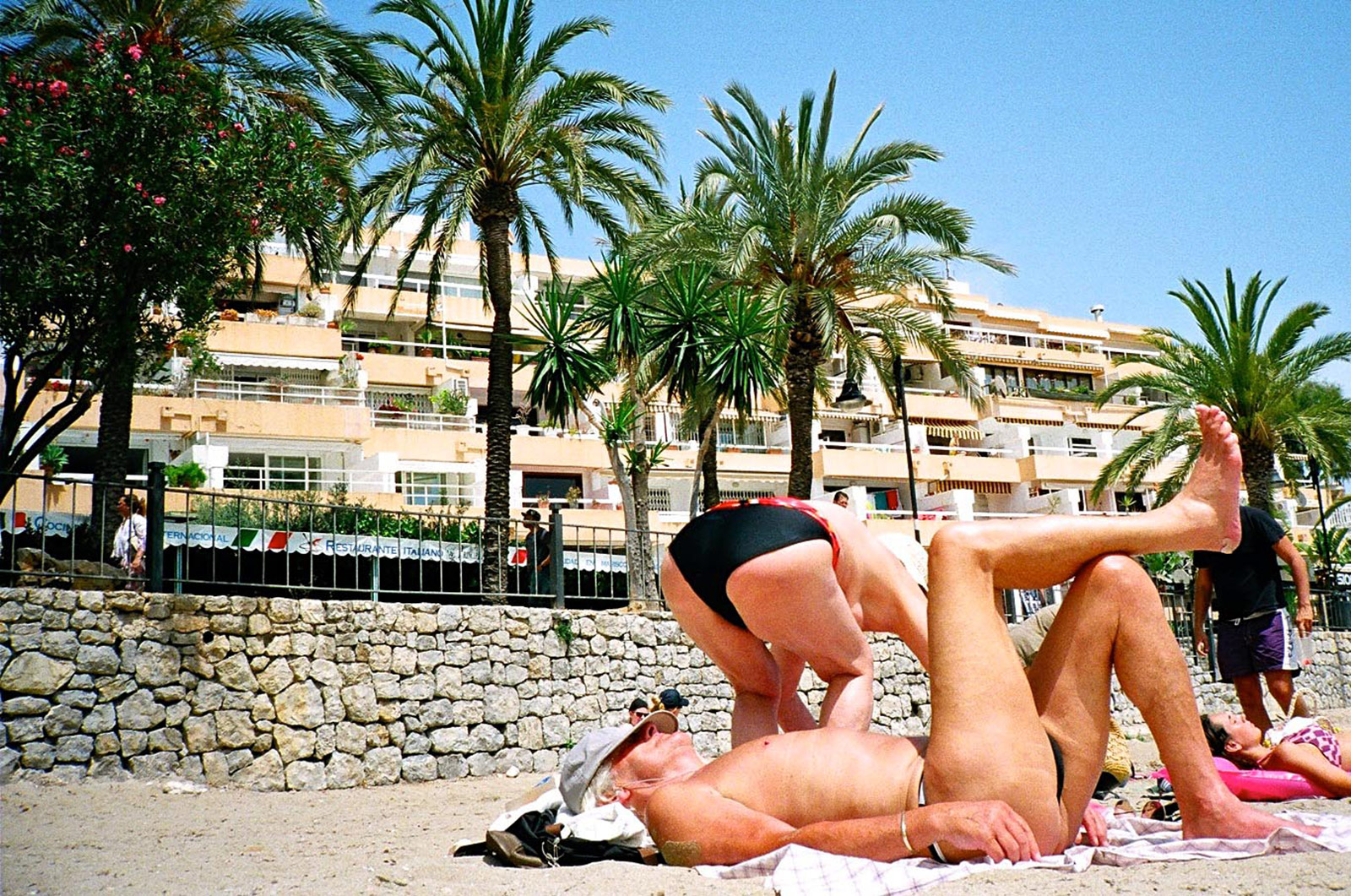 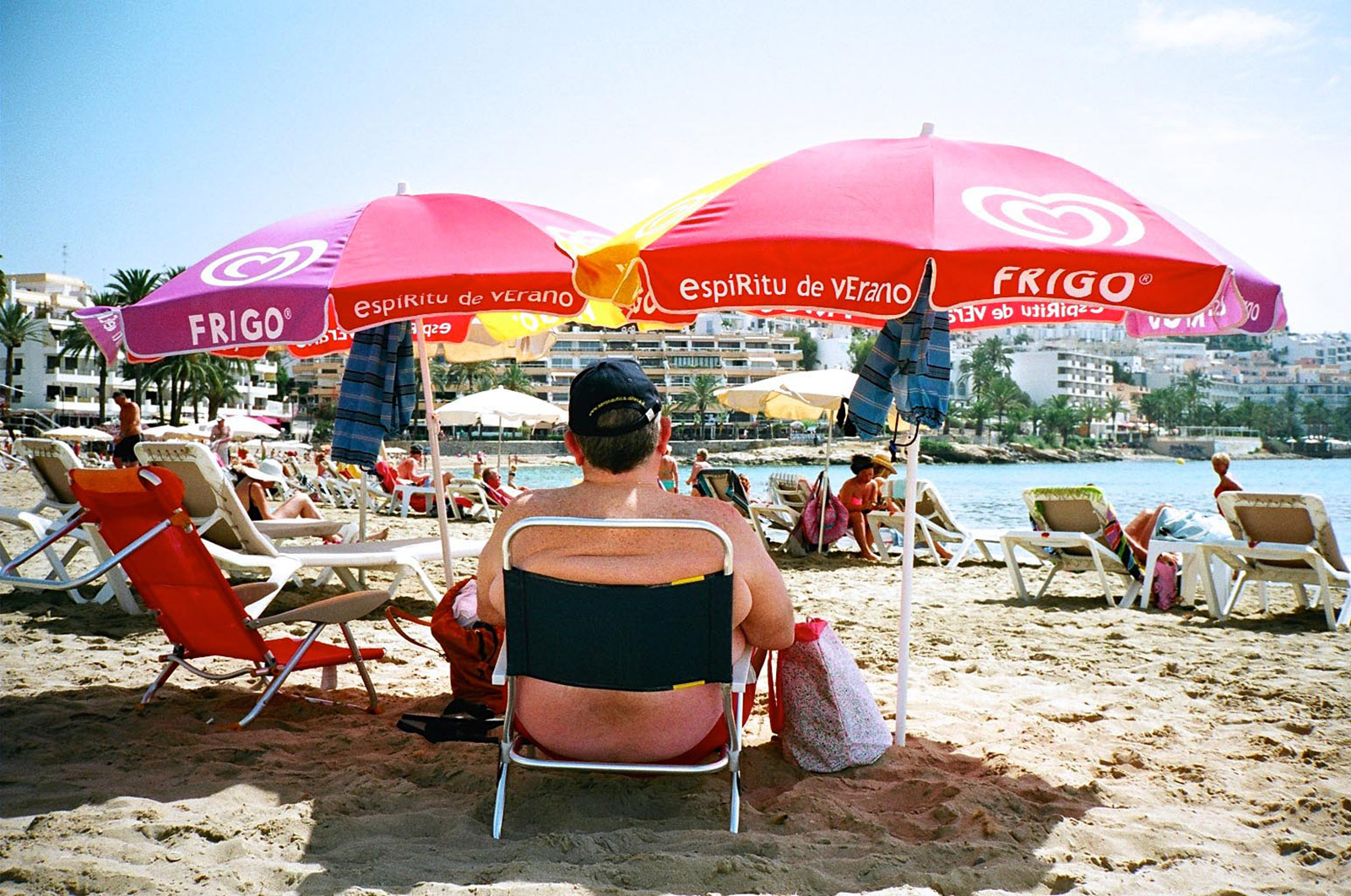