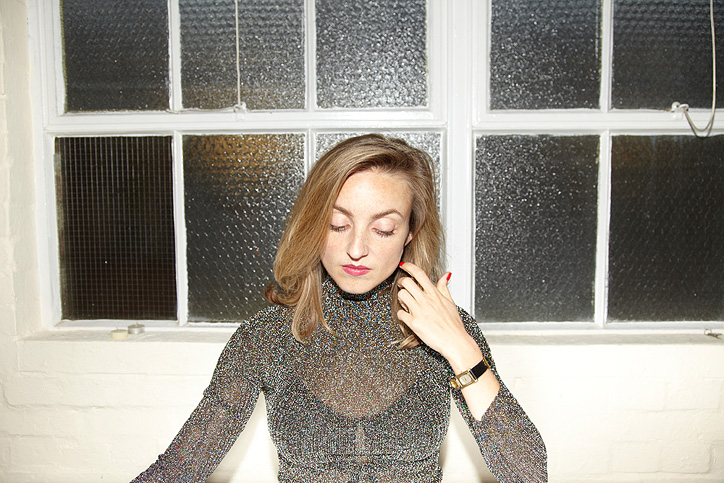 Two bus rides and two train journeys later I arrive in what seems like an idyllic neighbourhood with a primary school a few roads away. As I walk up to the semi-detached house I begin to question whether I have entered the correct address into Google maps. I stand and wait hesitantly at the front door and I'm greeted by Jessika Margo, dressed in all black with her blond hair in loose curls sitting comfortably at shoulder length.

When we walk up to her in-house studio we discuss her holiday plans (she’s heading to Sweden before going to Argentina) and her excitement and shock over the surprise release of the new Beyoncé album. In our hour long talk Jessika opens up about her youth playing the violin, working with fashion heavyweights like Hussein Chalayan and how she’s gone from making apparel to making lux leather accessories.

I moved around a lot; before I was six we lived in three different countries – Poland, Germany and Canada before moving to Sweden. I was speaking three languages fluently and spending a lot of time on my own. I learned how to be self-sufficient and independent very quickly. My mother remarried a Swedish musician when I was still young which influenced my love affair with music. I started to play the violin when I was six. Music was my main occupation until the age of eighteen. At the age of thirteen I had come to the realization that I didn’t want to continue playing the violin. However, growing up with a strict Polish mother meant that I had to continue until I eventually moved out.

Wanting to quit violin but having to continue because it was what your mother wanted must have meant you began to resent playing it. Was that the case?

No. I had a love/hate relationship with my violin. I didn’t want to be forced but on the flip side I also loved it. I enjoyed playing it. I was an active participant in orchestras and bands but when I moved to London I realized it wouldn’t fit in with my lifestyle. I was studying Fashion at Middlesex University, which meant I was always in school. I was living in a shared house with people everywhere. When you’ve been out all day and coming home very late you don’t have the time to practice playing.

How did you get your break in fashion and eventually end up studying at Middlesex University?

I had an interest in fashion as a child but didn’t think it could then turn into a career. The city I grew up in Sweden is rather small where the main course options available at the University are engineering or economics. Before I moved to London I thoughtI would study music but I did a foundation course in Art & Design and discovered I was rather good at 3D design. Fashion became an option again and went to a few open days one of which was at Middlesex University. They put on emphasis on having a limitless scope of imagination and boundaries, which appealed to me. There wasn’t a focus put on the technical side of fashion. When I applied I didn’t expect to be accepted but I was!

From what they told you at the open day to the day you began and finished the course was it as they described or completely different? Were you shocked or taken aback?

Just as they expressed on the open day the course was very creative. In hindsight I wish the course had a more technical aspect to it as well as a business module included. It was a very demanding and hard course but equally rewarding. My first year was fairly easy and went by rather quickly. In second year I went through a phrase where I lost my initial motivation. To keep myself excited I decided to do internships during my degree. I eventually went away for a few weeks to Paris and Amsterdam.

It was a very stressful time with very little sleep and barely anytime to eat. Again I was very ambitious and decided to cast my own models, employ a makeup artist and a hairdresser. My inspiration for my final year collection came from watching films about surrealism. I translated it by playing with proportions and reflecting imagery on the top of the garments onto the lower part.

What experiences and lessons did you take from doing your internships abroad?

My most memorable internship was with a design duo based in Arnhem. I lived with them throughout my internship, which meant I spent everyday in their company. More than anything we became very close friends and I later interned for them a few months later during Paris Fashion Week.The experience with them opened up my eyes to the way in which a collection comes together from the first stage to the final end product that we see on the runway. I was fortunate enough to sit in castings and fittings and have some input. Interning for Hussein Chalayan was different. I never got to see him that much as his office was on another side of the room. I only ever saw him when there was a fitting or in one scenario when the infamous hairdresser (Eugene) Souleiman was fitting me with a hat and Hussein came over to see.Although it was a big studio Hussein was very much in control of everything. The press department was in house so he made the decisions as to which publication or celebrity clothes were being sent to.

So you finish your Fashion BA at Middlesex University but you then decide to stay in further education and do Handcraft Tailoring for a year at London College of Fashion. What brought this decision on and what did you gain from doing it?

I wanted to learn the technical skills I felt were lacking from my degree at Middlesex. It had none of the attitude and desperation I felt my fellow students had on my Fashion BA. The people who were in my class were there to improve or learn a skill that could further their knowledge. During the whole year I learnt to do different stitches and pockets and consider the human anatomy and how different fabrics react to the human body. At the end I had made a pair of trousers, a jacket and a waistcoat.

In the Autumn of 2004 you would then set up your first label – Bora Margo with your business partner Anderson Borba Da Silva you had unexpectedly met. How did that come to fruition?

I met Anderson by chance before I moved to London on one of my summer holidays and got to know each other. I was sitting on a bench in Covent Garden preparing to start busking for money with my violin when I struck up a conversation with Anderson. We stayed in contact throughout my final school year in Sweden and when I came back we decided to create this brand. We had no idea about business and everything that happened was very organic and based on trial and error.  When we presented our first collection in a trade show in London we were picked up by a Parisian boutique and before long retailers like Colette and Liberty’s showed interested and decided to stock our collection.

Having done a Fashion BA I was surprised to know Borba Margo only did accessories. Was this a conscious decision on your part to avoid apparel and solely focus on accessories?

We first started with apparel, but after one season we began to introduce accessories. The buyers' response towards the accessories was immense and we could see their excitement for the belts we had made. We had a few good retailers that were stocking our clothing. However those stocking the accessories outnumbered clothing so it made sense to react to the response we were getting.

Borba Margo has come to an end but now you have Margo. Talk us through the design process.

Margo is only one year old but it came about after my boyfriend suggested I create an e-store. One of the manufacturers I used to use sells a vast amount of iPhone cases so I thought ‘Why not give it a try?’ I don’t have to follow a fashion calendar with Margo so I’m only responsive when there is a new phone or an updated style or size. The way I work is by looking at the leathers, hardware and details I can use. I experiment with shape and patterns then cut a rough shape of the case. It slowly builds up to the final end product that appears on the e-store.

Not only do you create leather goods for Margo but you also collaborate with designers such as Negarin. What is the relationship like with your collaborators?

It’s different depending on the collaborator. With Negarin we had a few meetings and I looked at her previous accessories. I was given a colour scheme to work with and after a few weeks I came back to her with the design ideas I had in mind and the leathers and techniques I wanted to apply. I was free with my creativity and the ideas I proposed to her.

Moving forward into 2014 what are your hopes for Margo?

I began selling in Darkroom in November, which has been successful. I hope to add more products to the brand such as gloves and bags.

I would use the time to play more music. 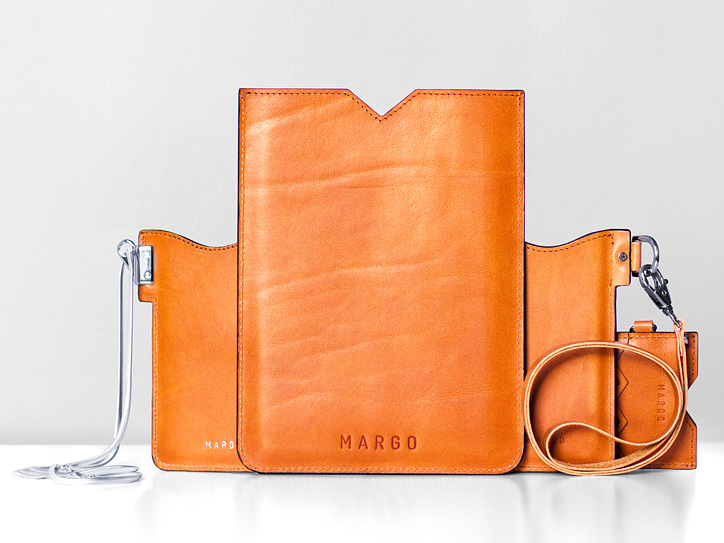 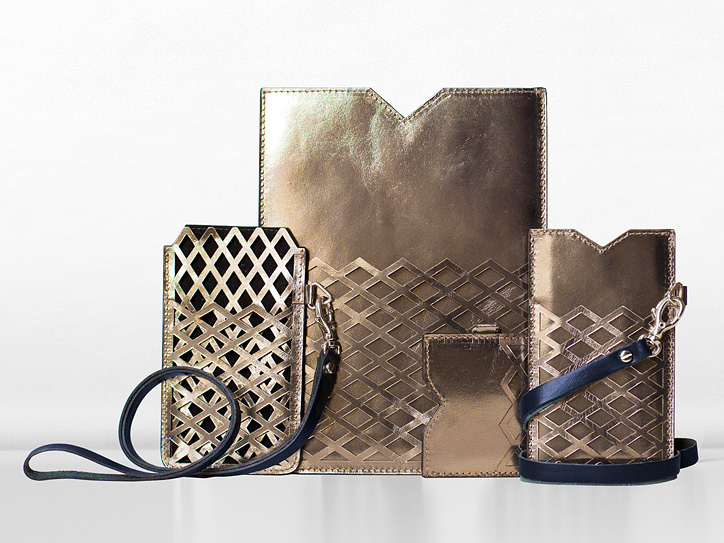 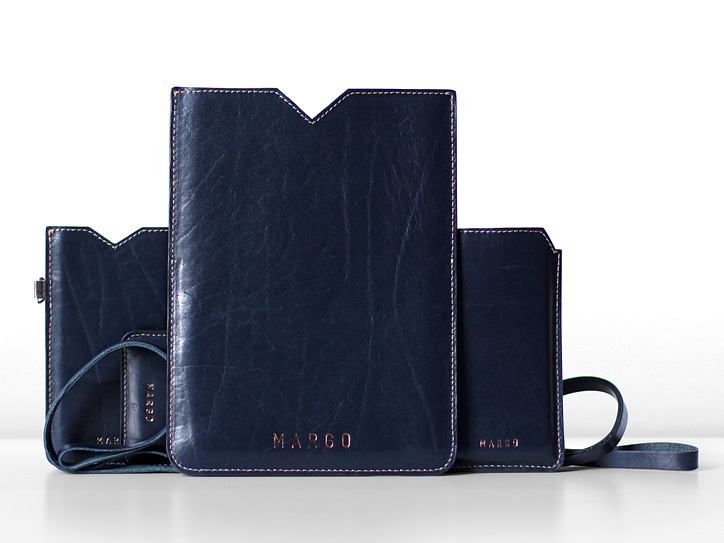 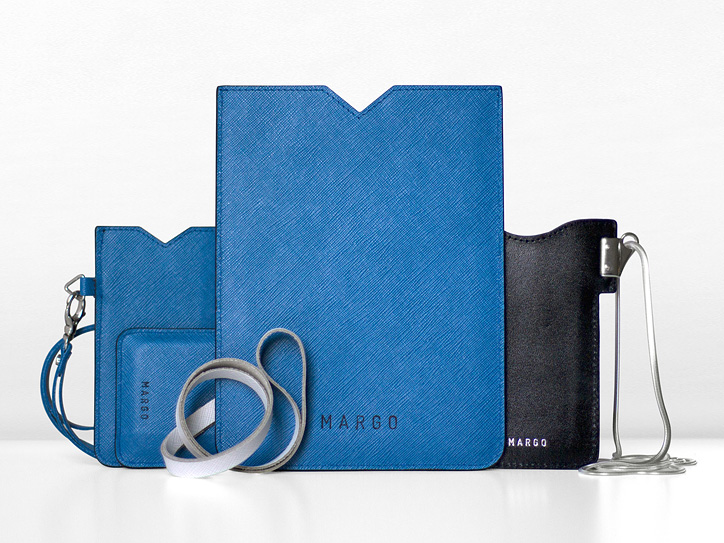 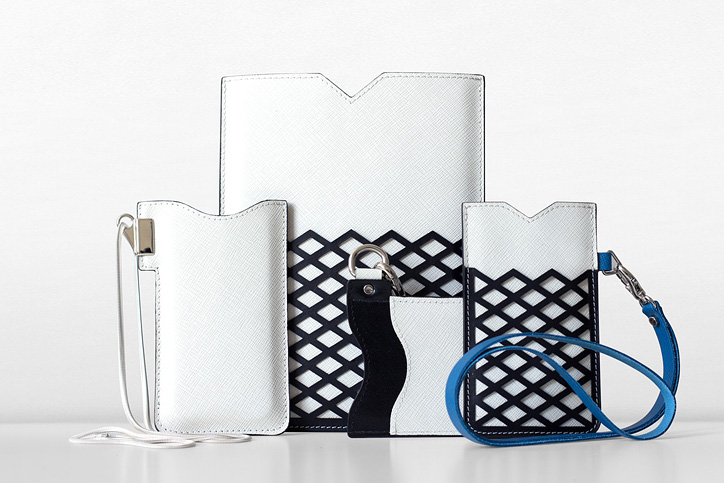 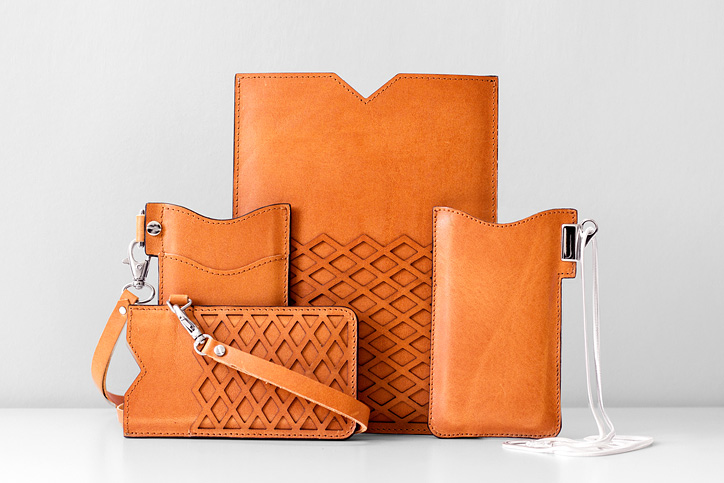 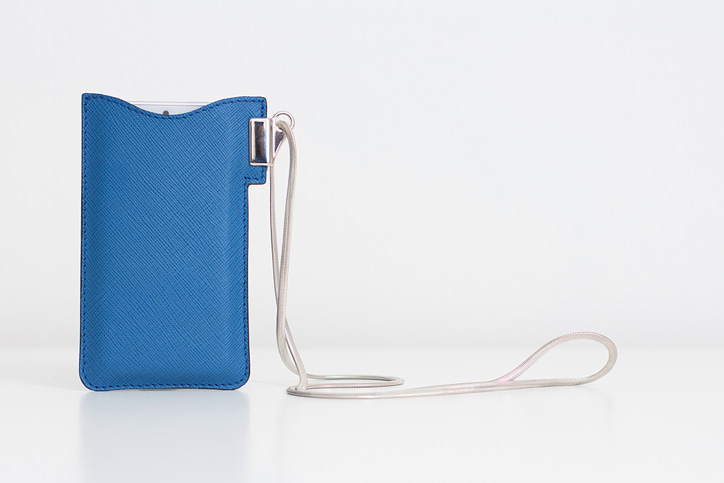 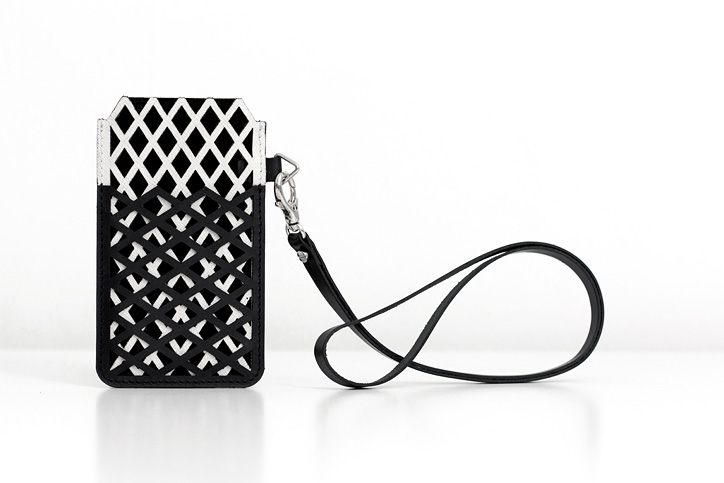 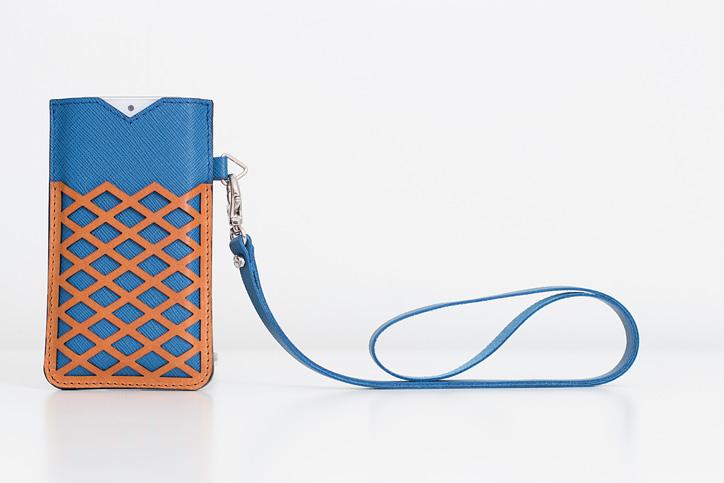 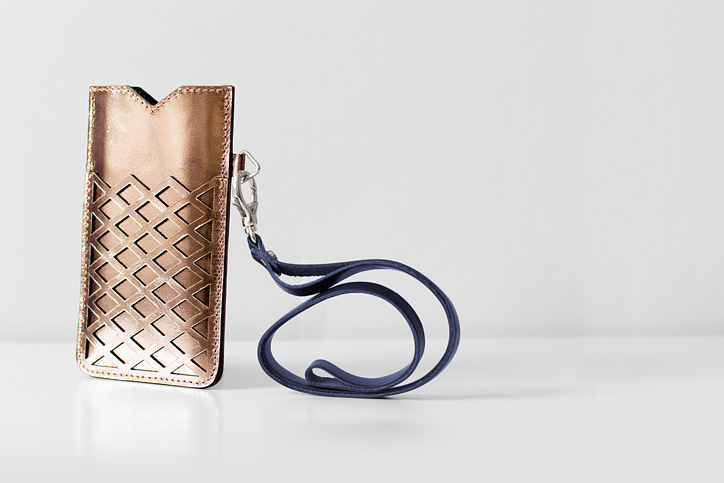 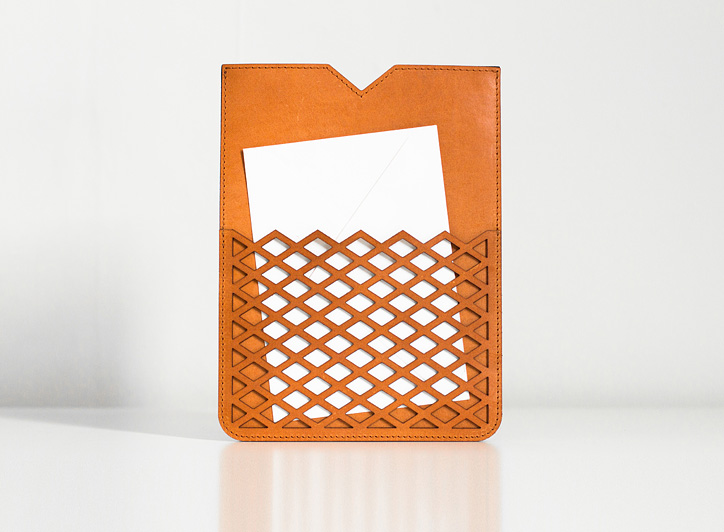 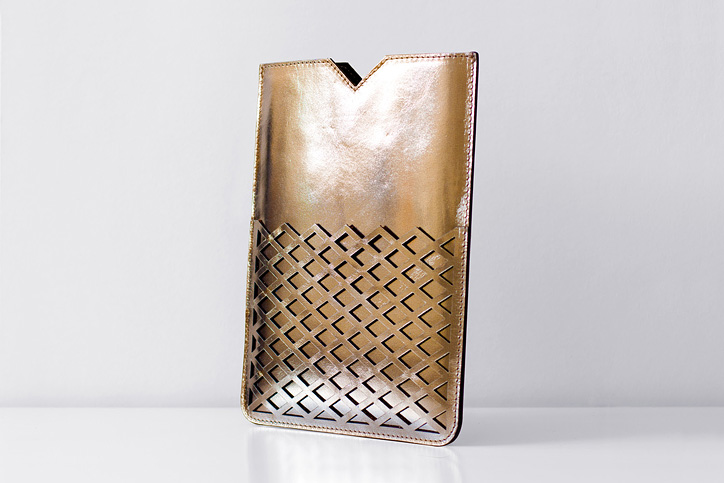