Making Designs On The Future 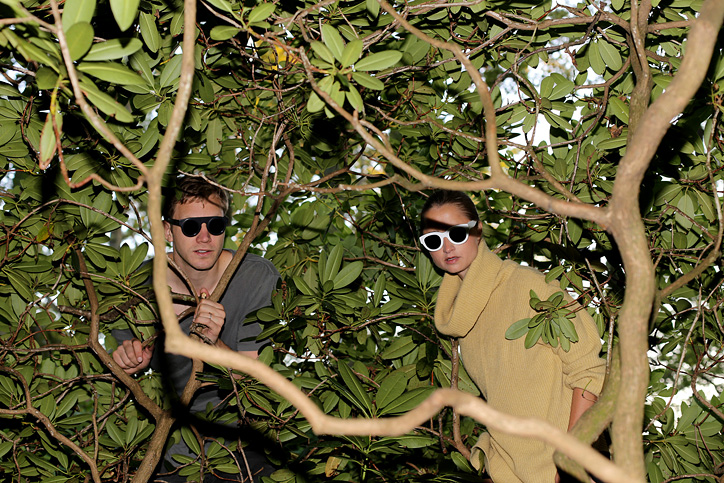 “To make sunglasses that are bold, yet wearable, stylish, yet reduced”, this is the declaration of design intent by the Swedish accessories brand Manifesto. We met the duo behind these big ideas, Martin and Karin Norrlind, who shared with us both their personal and professional ideologies and revealed how their real aim is for each to support the other, creating their very own world within the world.

Manifestos are usually born out of people’s shared ideas for the future. With that in mind, can you tell me a bit about your collaboration? How did you decide to start working together to create this brand?

Karin: I think it started with a personal shared idea for the future, about how we want to live and how we want to work. Neither of us are from a fashion background, I studied fashion but were not really part of the fashion crowd. Martin is the practical one and I am the theoretical one. I studied Modern art and aesthetics and I have a Masters in fashion theory.
Martin: I’m a graphic designer, which I think is really evident in the designs. We come from different stylist backgrounds, and we like quite different things, but somewhere we found a sharing point in our aesthetic worlds.
Karin: We met in very basic things; like colours, shapes and form and when we started talking about these things there was a lot of energy. Even though the sunglasses are quite a simple product there were all these ideas that came up that were very inspiring. On a very basic level, creating Manifesto was a lot about the fear of ending up an office forever.

I think most creative’s share that fear, I know I do. How would you like to live and work instead?

Karin: We would really like to live with the company and create something that could allow us go on playing and being creative, and maybe also live in a different way. The idea that you can work with an urban theme and fashion, which is very progressive, but still maybe live outside it, live in the countryside and be separated from all that and yet still be in the middle of it. That is our personal manifesto.

That sounds like a really beautiful and balanced way of being. If this is your personal manifesto, what is your professional ideology? If Manifesto’s are all about promoting new ideas and expressing desire for change, what new ideas would Manifesto like to promote or what current ideas would you like to change?

Karin: In regards to sunglasses, I would like people to choose the object for its own sake and not because of the brand. These things are of course; a bit difficult to say when you are also trying to build your own brand. We want it to be about the object again, the shape and form and choosing things because you like them. We do not want to over-brand the product or the people wearing it. We are not a fashion brand that can create a packaged look for you, the sunglasses are a small thing that you can incorporate with the things and style you have.

What kind of people do you think would like your designs and would want to wear your products?

Karin: I think it’s about people that are bold and eccentric enough to choose an object not based only on the brand but be able to choose this form and use it. People who are able to make the product their own, using their own style and incorporate it in their own wardrobe. People who are outsiders, strong in there own way, playful but not too self-conscious.

You have said on your website you want to make sunglasses worthy of the people you admire. If you could give a pair of your glasses to any one person, past or present, who would it be?

Martin: I was thinking of Carlo Mollino, he was an architect and designer who died in the 1970’s but he was a modern Leonardo Da Vinci. He made everything from sports cars to furniture and even created his own style of skiing.
Karin: He was quite an eccentric, and had an elegance and boldness to be himself, that is the kind of person we admire.

Who else has been influential in your designs?

Martin: Definitely the Memphis movement influenced us in our aesthetics; they used very geometrical shapes, their designs are quite graphic. Also I like how they used materials, instead of using real marble they would use marble laminate and then they would make their tables really expensive even though they were just using this plastic laminate. They also have a bit of humour in their products; their designs can be a bit cartoonish. We are also inspired by more Modernist designers, like Corbusier and the Bauhaus movement, but it feels like they lack a bit of the humour that I like.
Karin: I think that’s why we called the glasses names like Judd and Stella, the modernists are very self-conscious and pompous in a way. The names are not only a reference that this particular design of sunglasses are influenced by say, Frank Stella for instance. It’s about taking the names of these very big men and putting it on a pair of sunglasses which gives it a funny resonance, its like making these big men human again.

On your website you describe the manufacturing process, how the lenses are individually milled and how the frames are shaped and polished. It made me think in terms of the craft of carving a sculpture. Do you think of your designs being made in that way?

Martin: We hadn’t talked about it before in terms of sculptures, but when we read your question we realised that it is more or less our approach to it.
Karin: But I also think we think more in terms of the furniture industry, that when they design and make something, they make want it to become a bit iconic. Instead of it being fashion it’s about being modern. You have furniture that has survived a century and still feels modern when you put it into your interior. We want to make objects that can give a modern context, not only fashion. Something that will survive a little bit beyond fashion. I mean everything runs out of fashion at some point, but we're trying to think more in terms of furniture industry when we design something, and not only in trends and seasons.

Your glasses are made by hand by a family-owned factory in Italy? Is it important that your products are hand-made and how was it working with a factory that are known as one the finest eyewear manufacturers in the world?

Martin: When we visited the factory, they had their Italian aesthetic background and so they asked us a lot of times, don’t you want the logo on the outside and for it to have much more small shiny detail, and we had to say no, we just want an elegance. That was an interesting clash between the factory and us but we have a really good personal relationship with them now and they have a really good understanding of our designs.
Karin: In regards to them being hand-made, Its quite an exciting tension, that if you say its hand-made, you picture a certain kind of type of product, like traditional handicrafts, but our designs feel very industrial and hard, not what you would normally picture for a handmade product.

What’s next for you two?

Karin: One day we have a fancy to live full-time in our old summerhouse, even though it’s in the darkest county of Sweden. Its not the centre of the world, its quite outside everything, but it has a wood where we can cut down trees and it has a lot of room where we can work with restoration projects, a lot of old furniture we can restore. It’s a kind of stress relief to know you can go outside and dig some dirt.
Martin: I like to have this kind of down to earth feeling.

Would you like to branch out into furniture design? How do you see the brand growing?

Karin: We haven’t thought about furniture in Manifesto, maybe in another concept but not in Manifesto. We do have ideas for new products to build on this concept but it will probably be smaller items.
Martin: I think we are more furniture designers at heart, that’s the way we think about products.
Karin: That’s design though, useful objects that are beautified. It might be a bit early to tell about new products but we would definitely like to make more products in the accessories area.
Martin: Products that can take our ideas one step further. 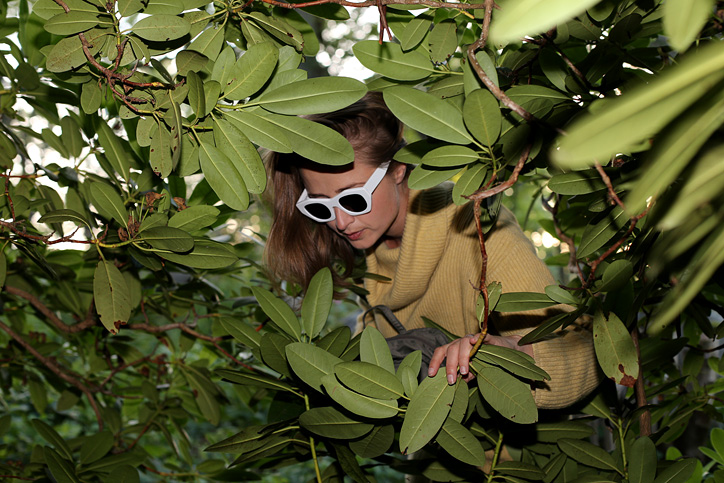 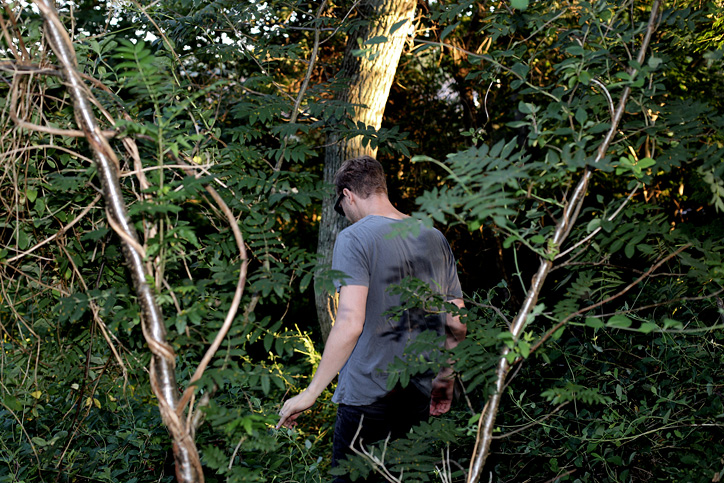 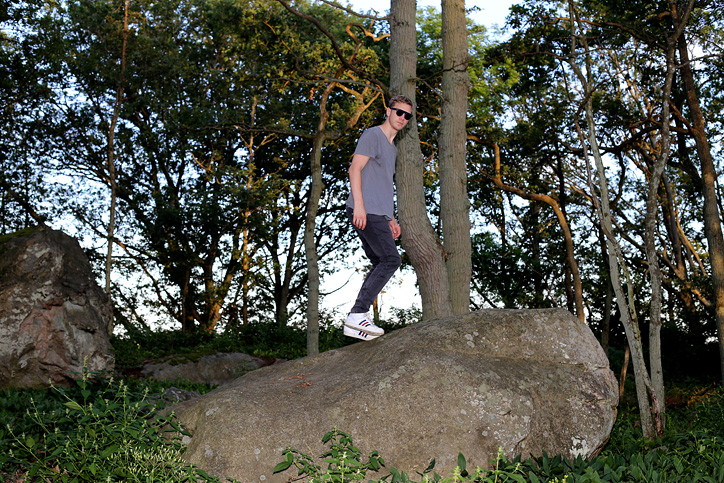 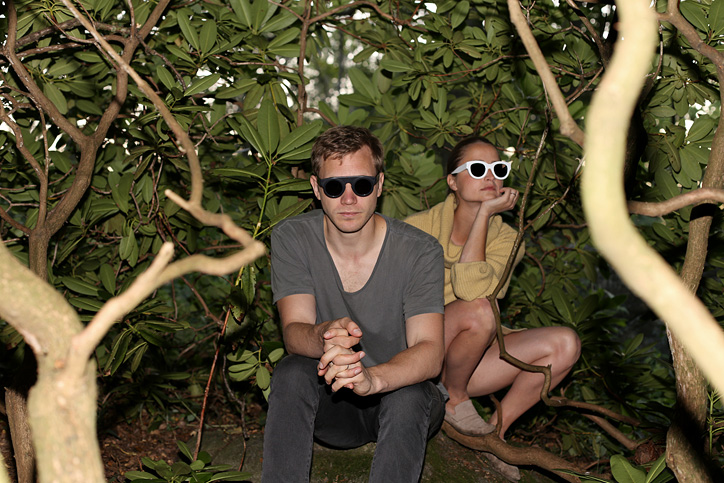 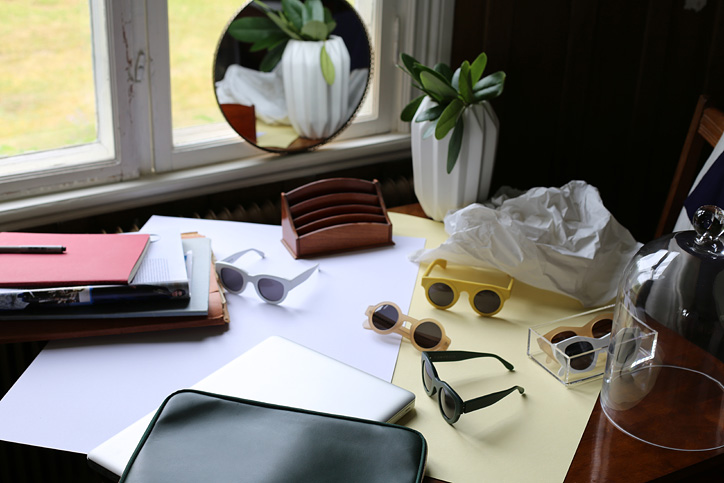 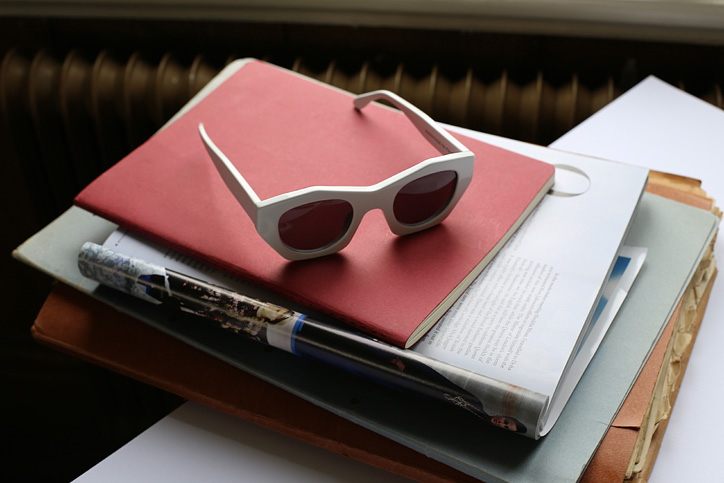 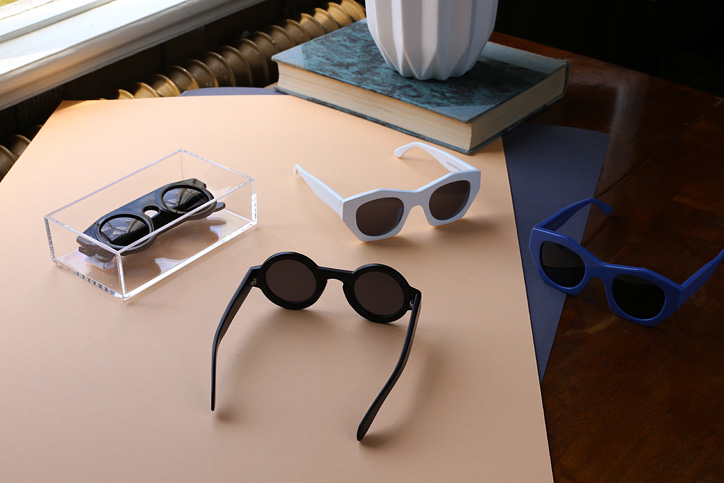 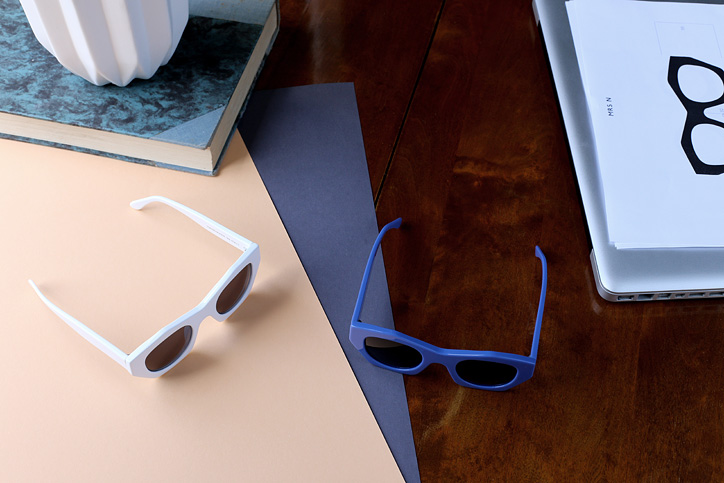 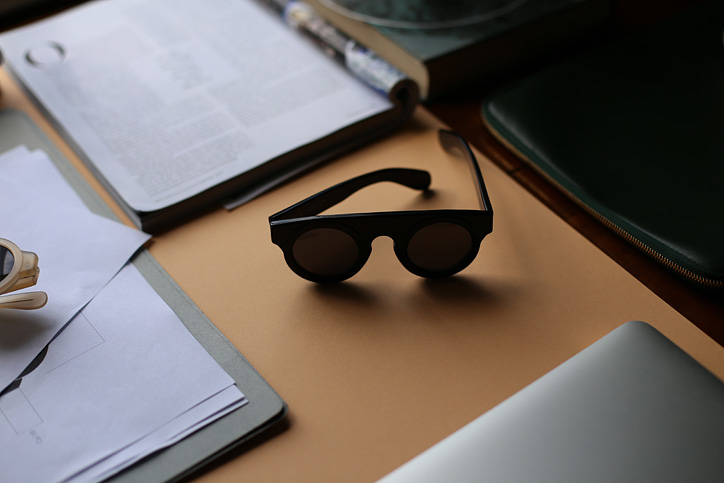 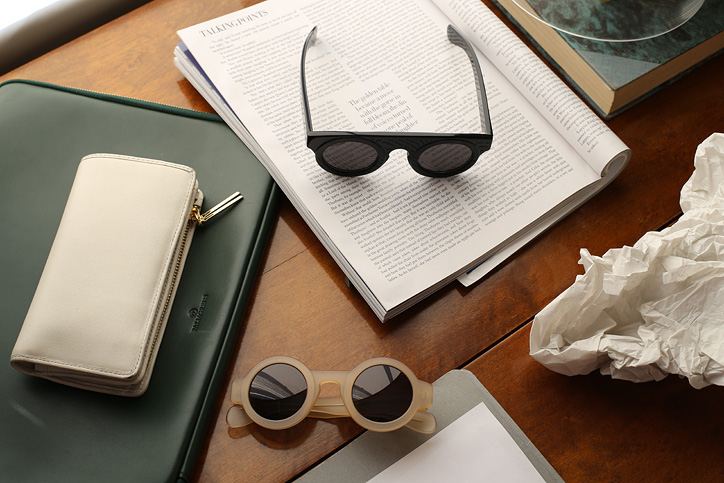 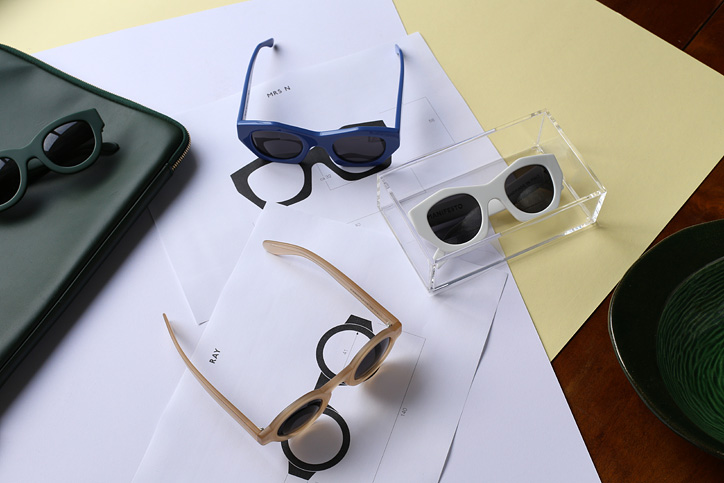 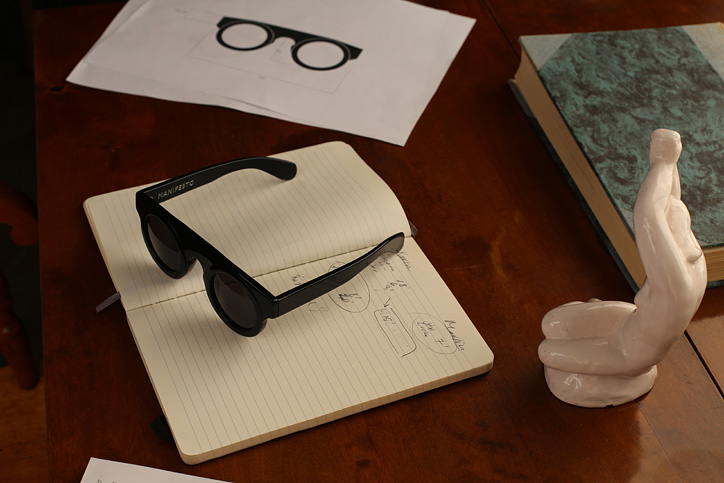