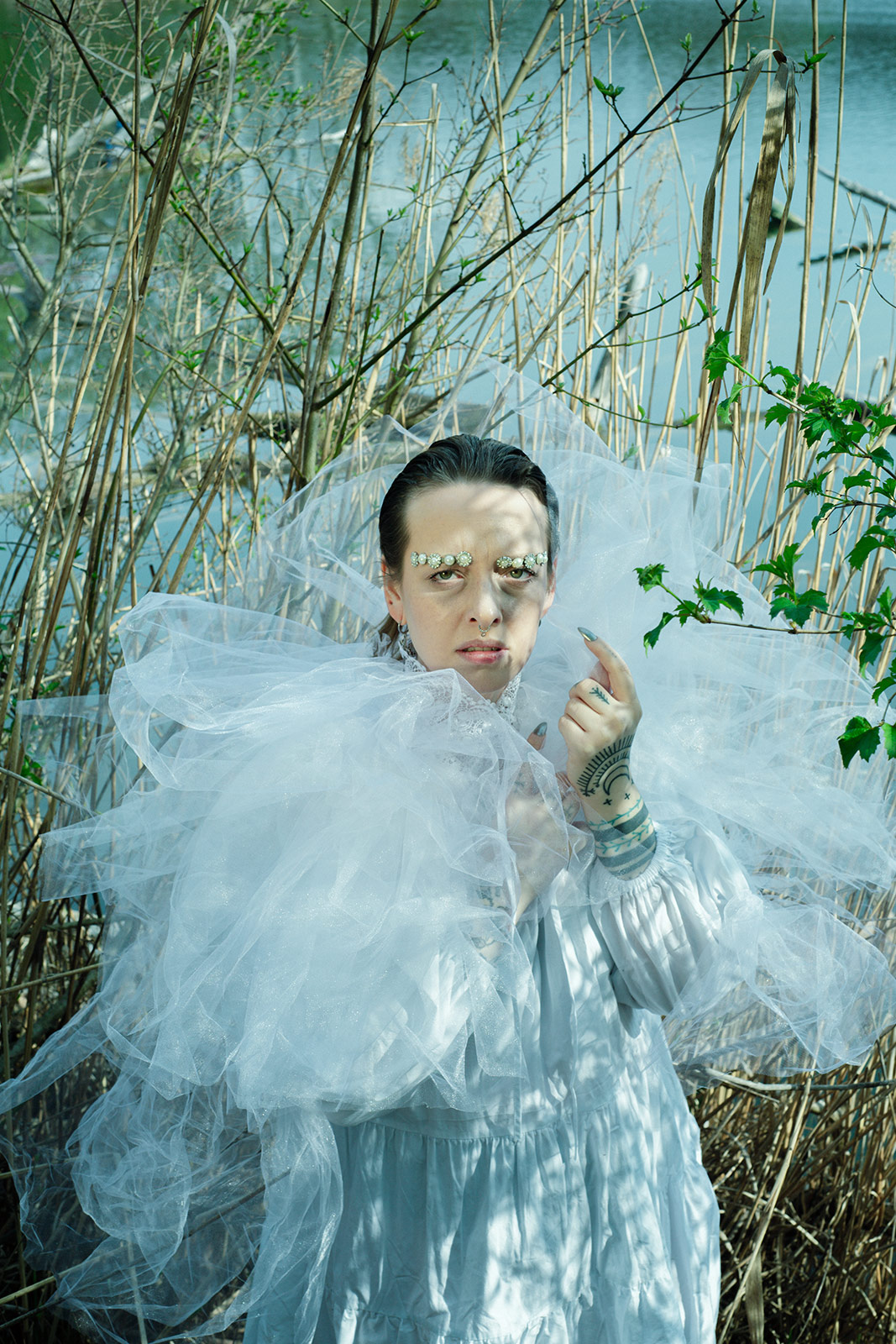 Using music to communicate with the world and navigate their own identity, queer non-binary sound artist, musician, and activist Zosia Hołubowska, aka Mala Herba, explores sex and body positivity through ritual dark wave performances. After not seeing themselves represented in the music scenes that they were drawn to, the Polish artist created Mala Herba as an alternate persona. Introducing fragility and mistakes into her compositions, Hołubowska experiments with traditional ways of singing and synthesisers to create performative sound landscapes that explore queerness.
Posing questions rather than delivering answers, Hołubowska views their art as a form of activism. Using sounds as their personal form of queer activism, the artist has dedicated themselves to marginalised bodies, creating a space for non-normative gender expressions and sexualities. Looking to create a platform for queer, femme, non-binary and trans voices to be heard, Hołubowska founded Sounds Queer? in 2015. They have also participated in the Intermission album, organised by the Unsound Festival, which is officially selling their vinyl starting today.

Navigating the contradictions and contrasts in their work, Hołubowska fluctuates between minimal darkwave, experimental interpretation of Eastern European traditional music, noise soundscapes, and dark techno. Working to challenge a traditional discourse of Polish culture that queer people don’t exist in, the Polish artist’s non-binary synth looks at the cracks in the narrative, re-imagining a new past.

How does your music allow you to explore your own identity? How does it translate through and speak to your activism as a queer artist?
I’m not so good at expressing myself with words, so music is my way of communicating with the world. I like this quote from Freya Jarman-Ivens that "queer is dramatising incoherencies," and I feel like my queer/Eastern European/migrant experience is full of contradictions. Working with sound enables me to process and express all of those dissonances and harmonies. I see my art as a form of activism, not delivering answers but posing questions. I am too anxious to engage with direct actions or sometimes even go to protests so I use sound as my form of queer activism.
How did you first discover your sound? How has it evolved over the years, and in return, how have your perceptions of sound evolved?
I have been singing since I started speaking. But I truly found my voice when I worked with Emma Bonnici and her ‘singing as life practice' approach, based on a natural voice technique from Kristin Linklater. Connecting with my body in that way made me a more harmonious being in general. I don’t think I have a specific sound when it comes to music production. I am simply obsessed with eighties sounds and the possibilities of electronic music in general. I learn every day, by watching tutorials or studying coding. I love challenging myself.
I think over the years I learned to understand the importance of not only the melody but the dynamics and the texture of the sound itself. Studying at the Sonology Institute broadened my horizons. I just wish I was more confident in what I am doing. Every release is torture of self-doubts.
Your work explores queerness, sex, and body positivity through ritual dark wave performances. How does each of these themes intersect in both your music and your activism?
I am dedicated to creating space for more diversity. I don’t feel represented in music scenes I like and I want to change that. I want to see more different shapes, bodies, desires and feel welcomed, represented. That’s why I created Mala Herba as a curvy, confident, sexy dark persona. It’s not always easy to do it. In my everyday life, I often wear tents and have many insecurities... But I want to practice self-love and jumping on the stage half-naked. Seeing that so many queer and femme people feel inspired and recognised helps me continue. 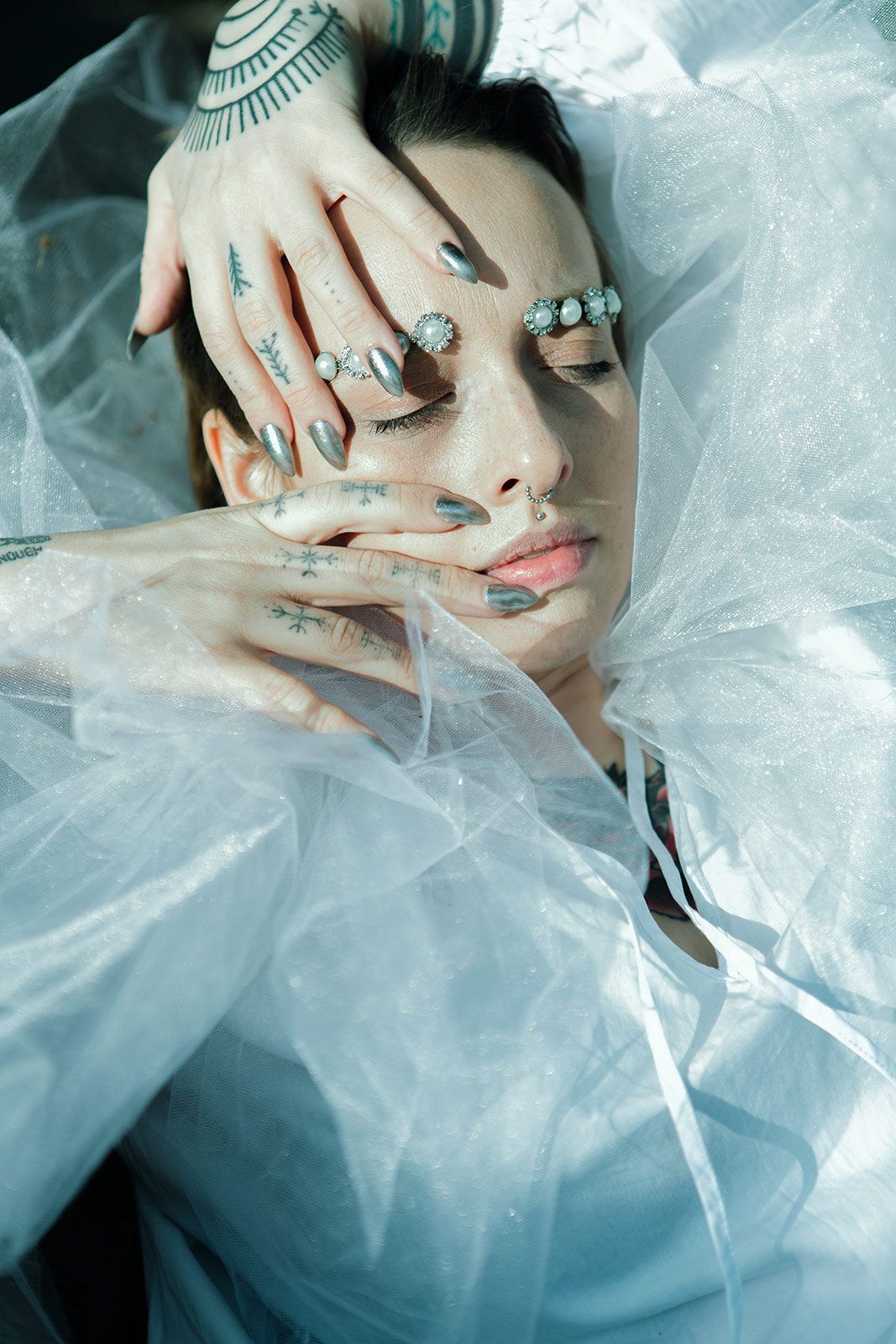 How do you identify with queer sound? What does it mean to you and how do you define it?
The queer sound is more of a question of approach, rather than concrete sound quality. When composing, I like to work with concepts of collectivity, vulnerability, braiding different voices and narratives and thinking about making a space for mistakes
How does your work create a space for a discussion and creative exploration for other artists following in your footsteps? How does your work with queer, femme, non-binary and trans individuals create a platform for these voices to be heard?
The core of my practice is sharing knowledge and tools. I founded Sounds Queer? in 2015 and curate the programme of workshops, performances, jam sessions, and exhibitions and I teach many workshops. I just wish for younger artists to have a support community, someone to ask questions to. I hope it will make it easier for them to experiment and release their material.
You experiment with traditional ways of singing and synthesisers to create performative sound landscapes, that explore queerness. How do you use synthesising to challenge not only rules in music but also social norms?
The history of synthesisers and electronic music is full of unsung heroines, pioneers who pushed the meaning of sound, art, and gender norms. I still think that being a femme person with a bunch of gear on a stage is revolutionary.
You create soundscapes for dance performances, interactive sound installations, performances and audio essays. How do you choose the sounds to accompany these mediums?
I always try to come up with a new technique or tool that I learn to use in the process. Or work with the way the sound is composed, not thinking about the result. I like to introduce fragility and mistakes into the compositions or let the compositions be haunted or visited by the “past.” 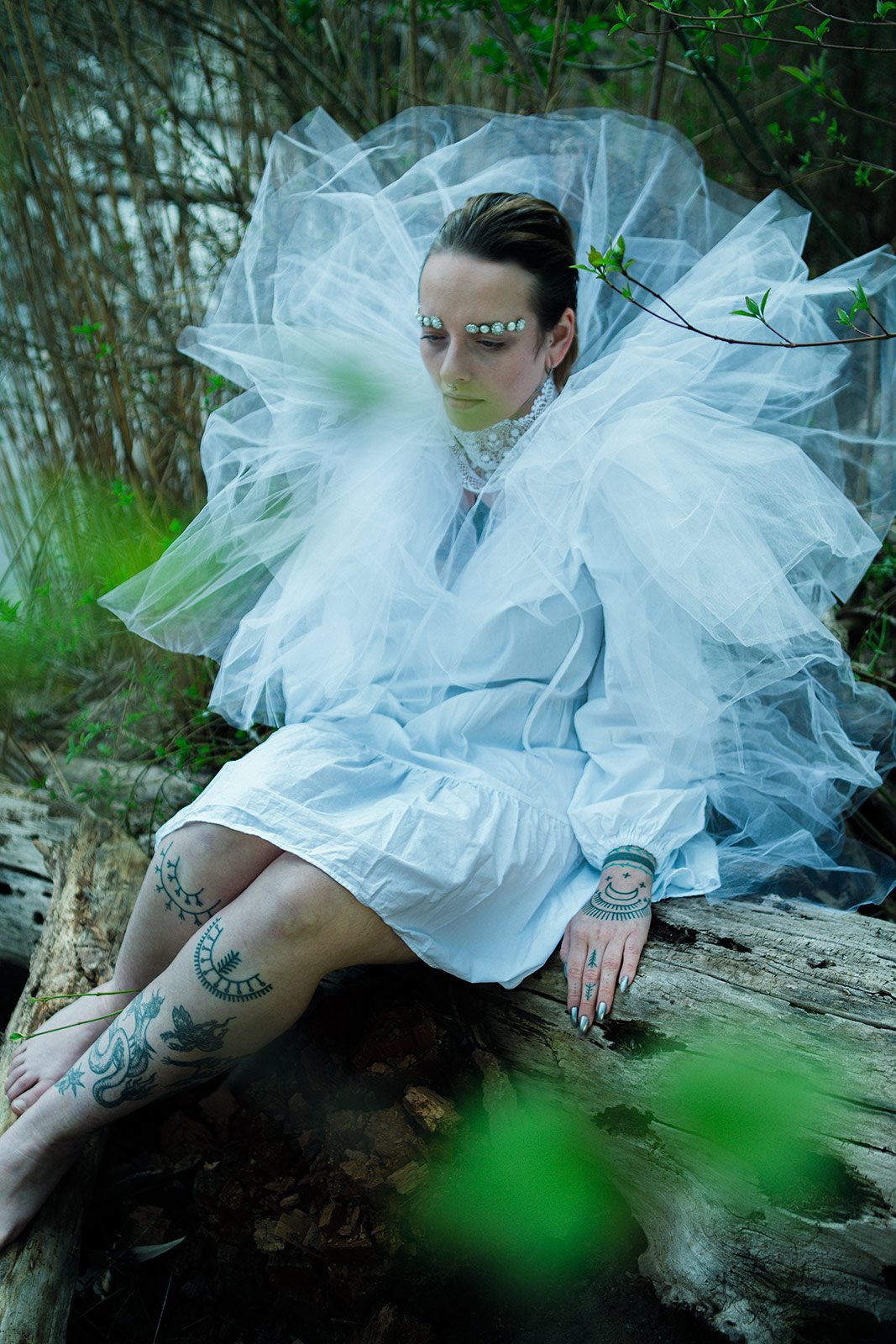 Your work fluctuates between minimal darkwave experimental interpretation of Eastern European traditional music, noise soundscapes, and dark techno. How do you create a balance between these sounds? How do you fuse them to create a unified whole?
It’s far from unified and I don’t think balance is my goal. I love contradictions.
How does your music speak to the social and political issues surrounding queer people and the LGBTQ+ community? How does it deal with the tension between being from Poland and being queer?
I am trying to find little 'queerable' moments in the archives of traditional Eastern European music. I want to find my place in these traditions and counter the narrative that queer people never existed or don’t have a place in the bigoted nationalistic discourse of Polish culture. We have always existed on the fringes. My work looks for those little cracks, that allow me to re-imagine the past.
How does your work create a space for non-normative gender expressions and sexualities? How does it work to break down and challenge the social and political landscapes around you?
I think by being openly non-binary and queer I carve this space for myself and others. I often dedicate my work to marginalised communities and strive to make them feel safer and recognised in what I do. May it be a well-wishing spell, a text, a video with different bodies in it. Personally, it is a bit challenging because to be practising magic is something I take very seriously and it requires a lot of energy. I have to be careful to not overdo it and abuse my own strength. To be visible and vocal is both painful and rewarding. I need my community for support, this is why it’s so difficult to be isolated at the moment and alone with my doubts. 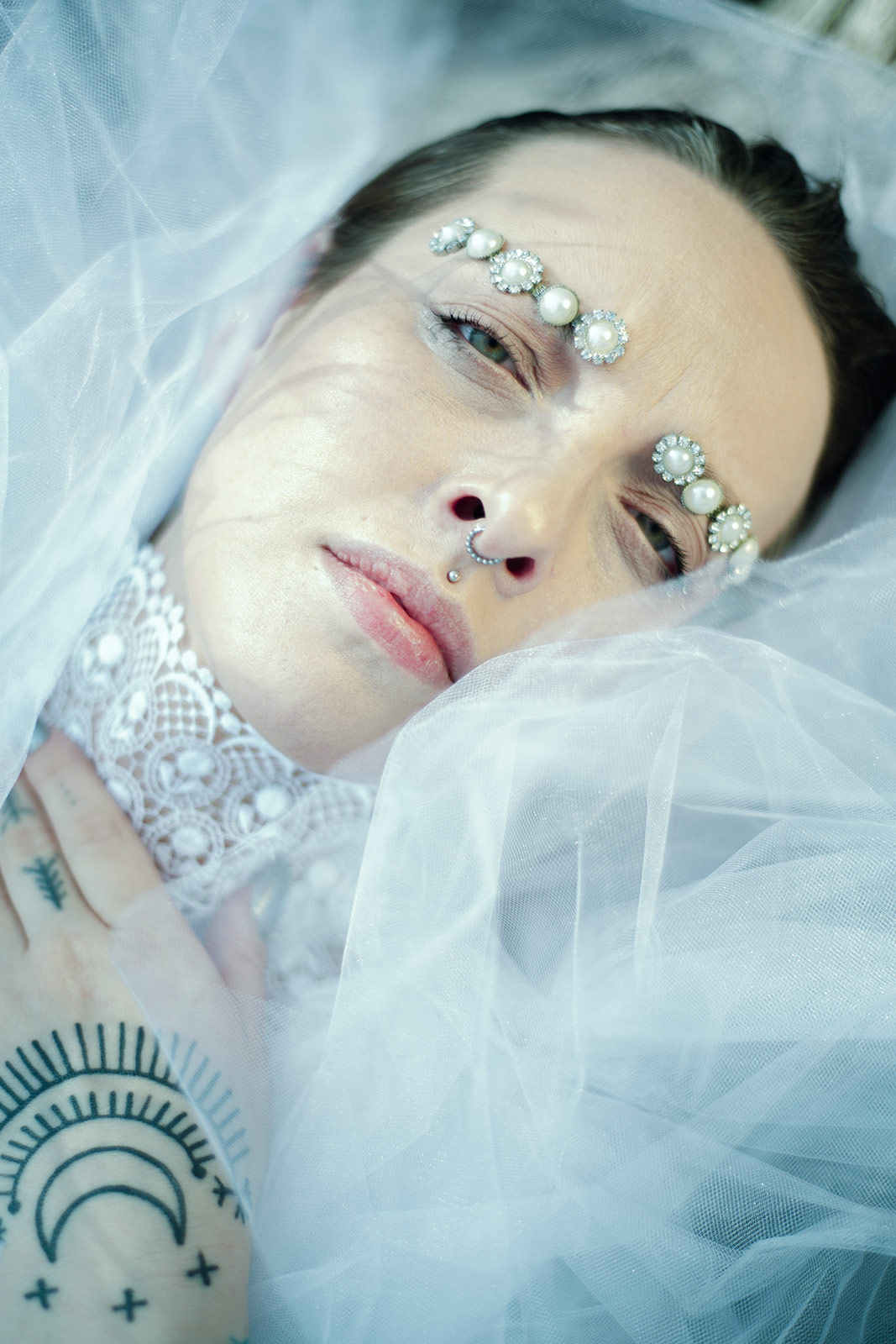 In your album Demonologia, the focus on marginalised bodies reclaiming power is clear. Being a marginalised body and producing a marginalised sound, how does that motivate you and drive your creativity as an artist?
It is a constant negotiation, really. On one hand, I believe I have something to say. It’s not a coherent manifesto, I don’t need it to be. I just want to be a dissonant note that stops you for a second. For one person it’s uncomfortable but for the others, it’s this friendly wink: “hey, my sibling, we’re here for each other, we won’t be silenced or destroyed, I love you.” On the other hand, I doubt myself a lot. Should I be taking space? Is it really important or unique what I am doing?
Demonologia features a variety of sounds that allude to Eastern European music, magic, herbalism, and demonology, combining these references with contemporary electronic music, what is the story behind this album? What was the creative process behind it and how was it developed?
I am really interested in undoing or queering the archive and braiding these different elements with care, love and respect. I believe that traditional culture and music has the power to perform a community and conjure a safer space where different experiences are welcome.
Maybe Polish culture or the way it has been archived is not openly queer but there were spaces for non-normativity and I believe it is possible to read it in a reparative way. To find these little cracks, to re-imagine the past.
I am very inspired by magic as political activism, a sort of different form of agency, by herbalism as an anti-imperialistic knowledge and by demonology as a manifestation of femme vengeance and raw rage. I spend a lot of time searching for texts and melodies that inspire me but it took me twice as long to experiment with how to filter it through my body and electronic music. I am not interested in 'styling' or reconstruction. Rather, I believe that electronic music has the capacity to translate the pulse, the microtonality, the texture and the energy of traditional music in a way that we feel drawn into this primal community of dancing till oblivion.
You’ve been dedicated to promoting women, queer and non-binary musicians on the electronic music scene, what message are you hoping to send through your work?
Please don’t spend the next 5 years daydreaming and doubting yourself. You can do it, now. The first track will be shit but don’t give up. There is a huge community waiting to support you. 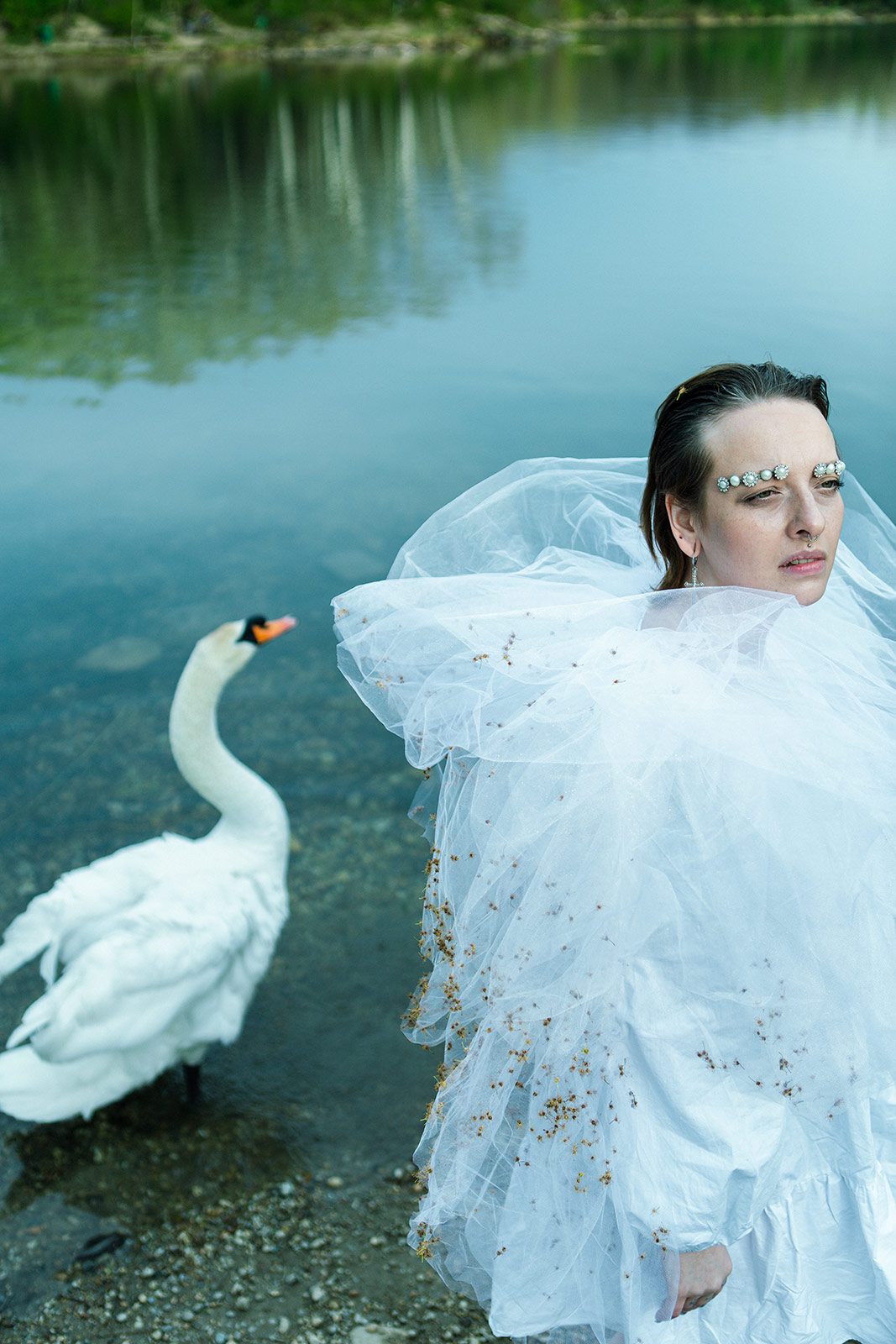 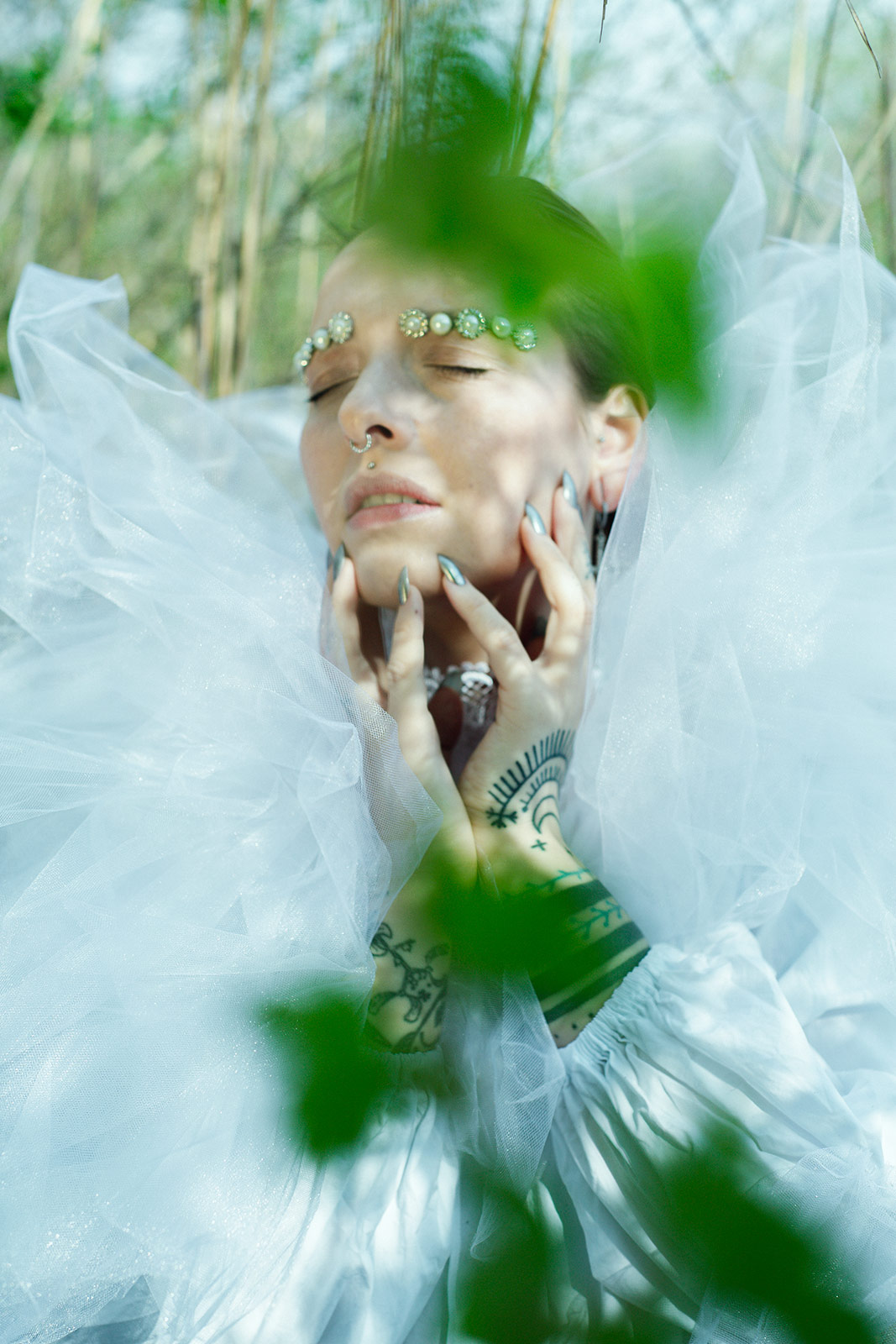 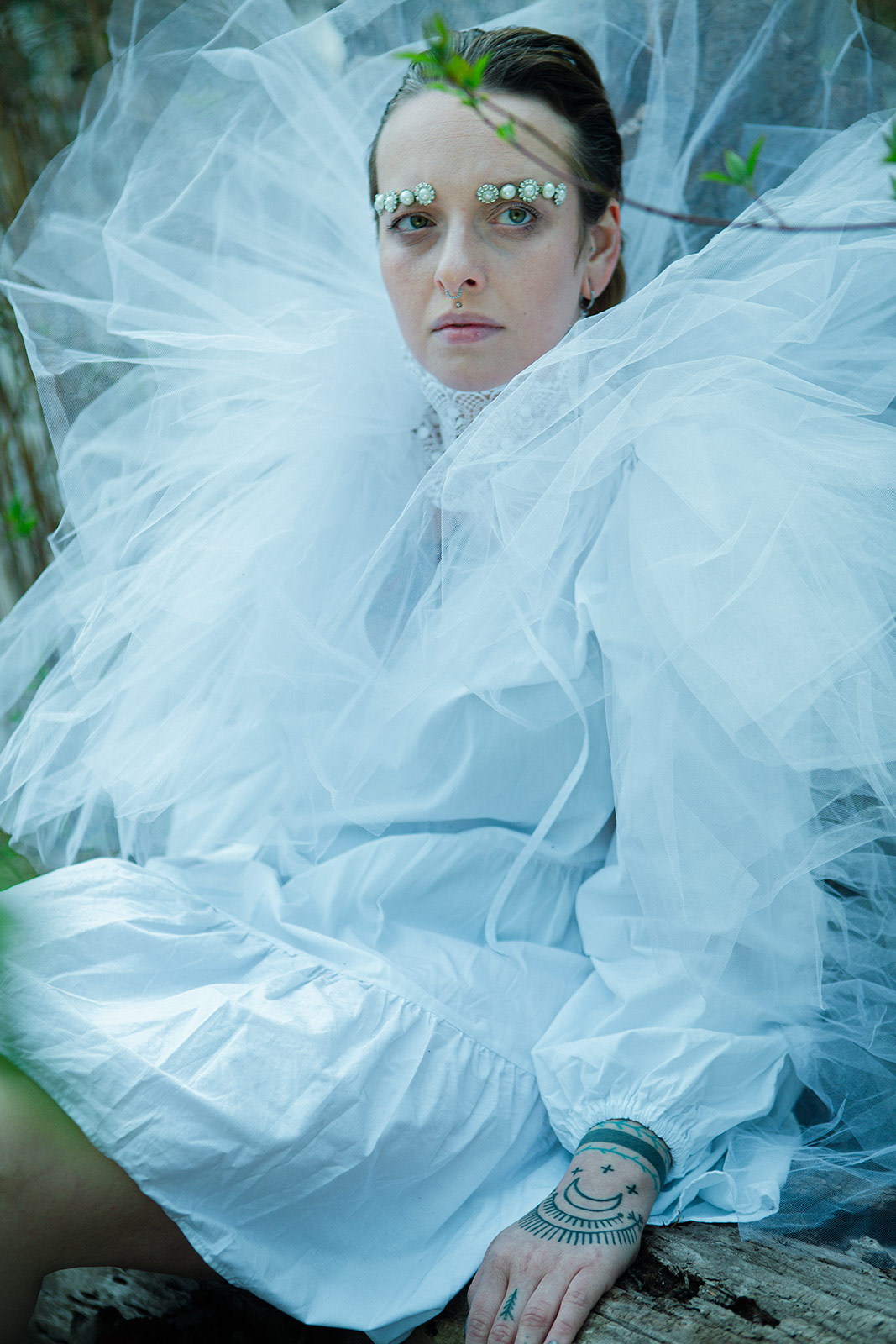 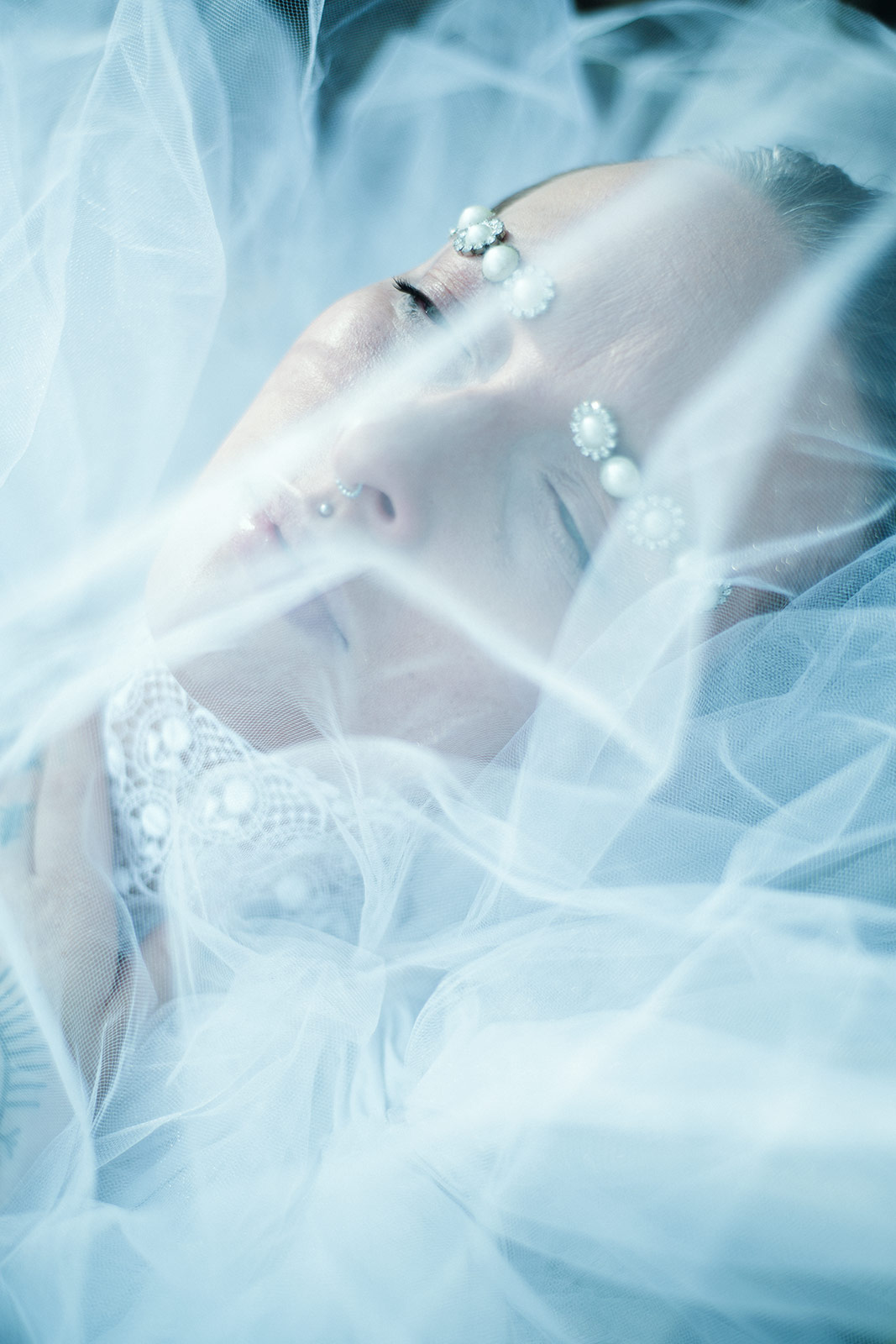 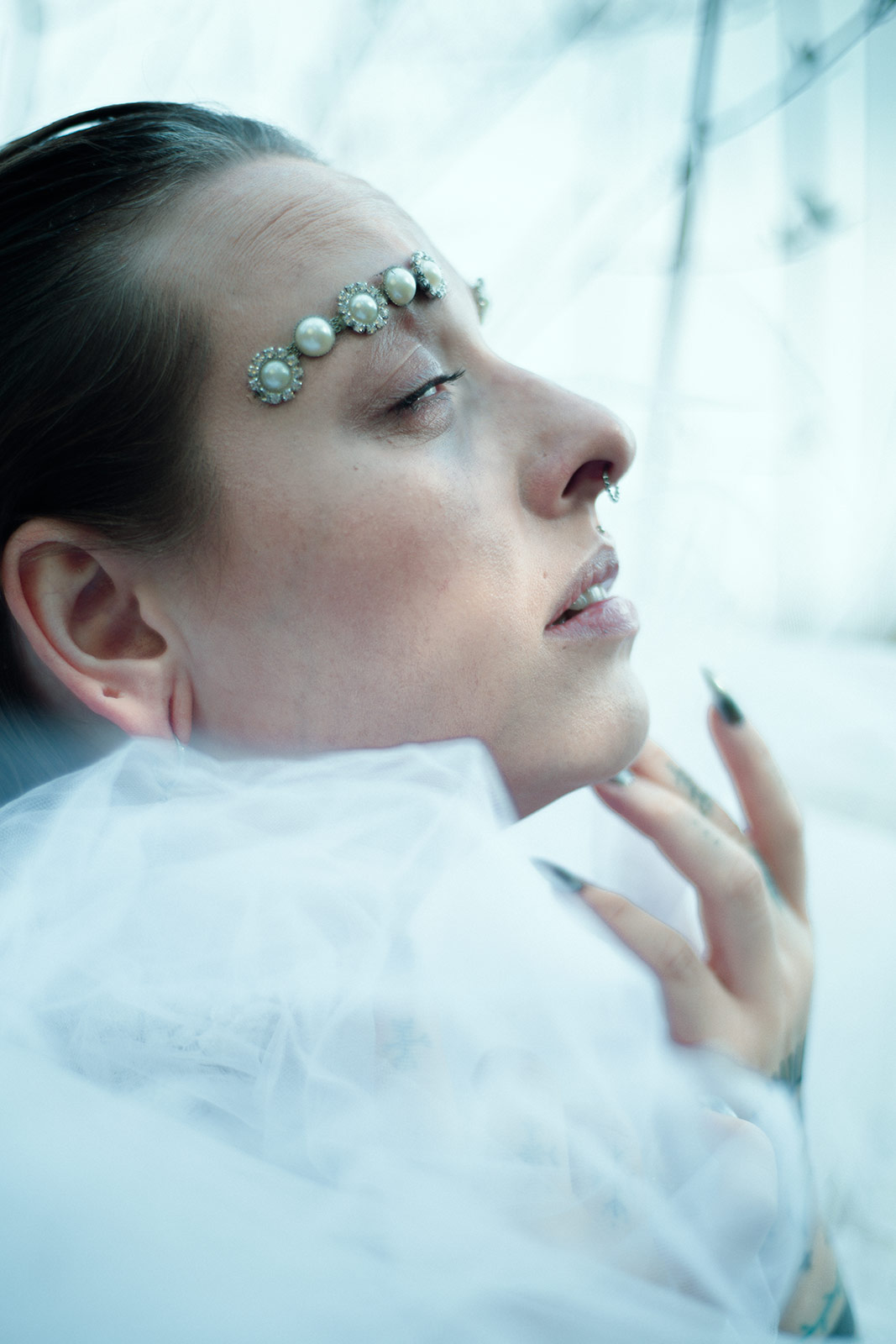