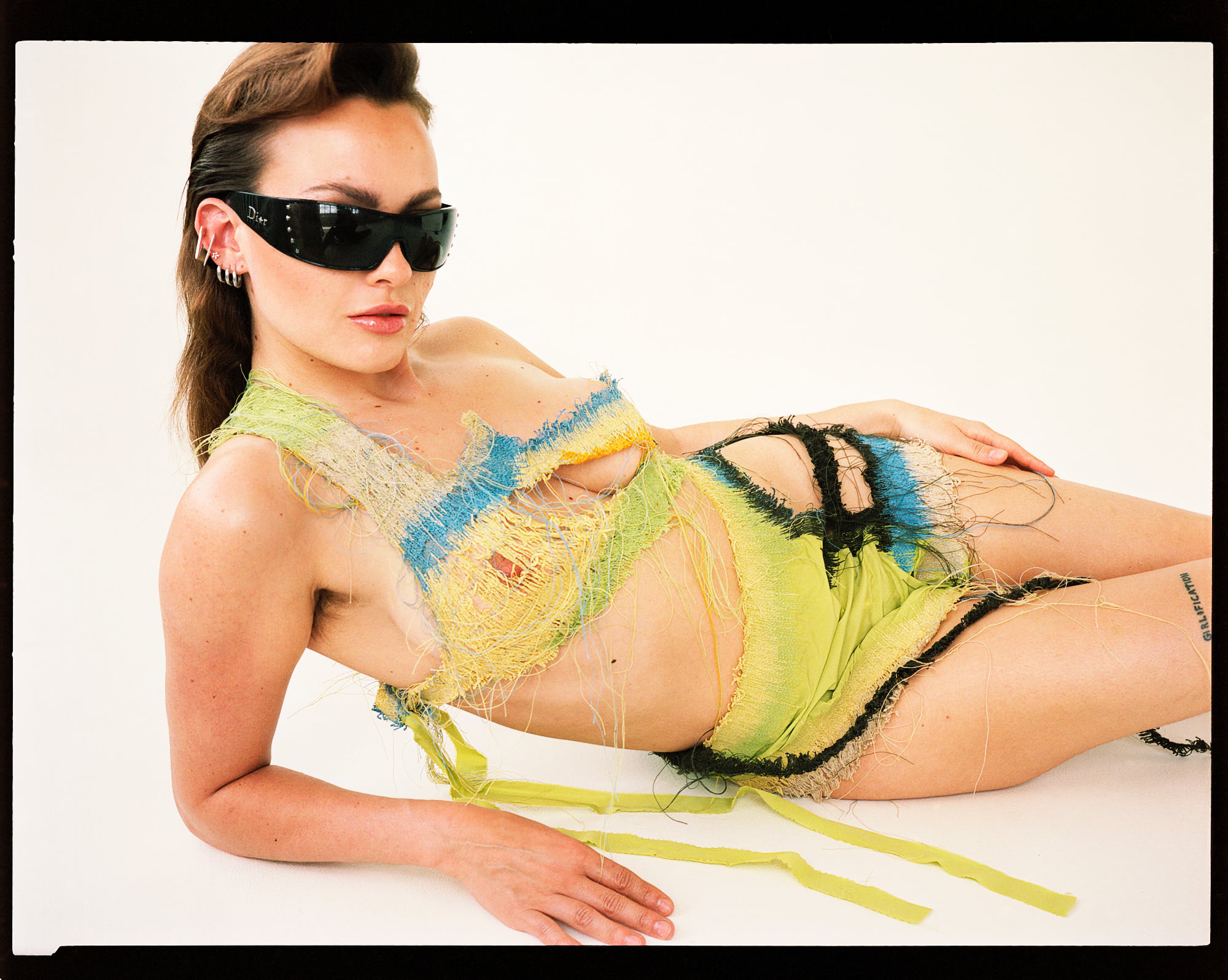 Sex-critical, evocative and explicit. For Maja Malou Lyse, the female body is at the centre of sexual de-construction. Using her body as a channel for her art, the contemporary artist is working to make sense of her own experience by pushing sexual boundaries and challenging the landscapes of mainstream feminism. Manifesting her body activism to explore the paradoxical world of sex culture the R rated artist aspires to break the mould of sexuality while examining politics of desire, pleasure and the role of the female body in society. With the provocative nature of her work, Maja addresses societies encoded ideas of sex and challenges the perceptions of sexuality and pleasure. Read on as she dissects the political world of sex while creating new narratives.
Your work examines politics of desire and pleasure, as well as the role of the female body in society. What drew you to explore the wicked world of sex culture as an artist as well as an individual?
I guess that I’m just trying to make sense of my own experience! People usually get really fixated on things that don’t make sense to them. To me that’s obvious! So I get confused when people assume I’m a sex maniac who just loves to have sex and dildos. I mean, if that was the case, I don’t think I would be giving it that much thought, you know?
My relationship to sex, my body and desire has first and foremost been tied to confusion, trauma and alienation. Pleasure and agency have in a way always been secondary. But sex is a political matter – not just a personal phenomenon, so questions of what happens in the private or domestic sphere become central to questions about the working of capitalism or the workings of power more generally. Whether we like it or not we’re all living in a world where we’re constantly being bombarded with sexual information, imagery and ideology. So as an artist, it's like an endless stream that’s interesting and perhaps healing to investigate.
You say that sex is not a natural act – could you expand on this?
Sexuality is more like Jell-o. You know that red pudding like dessert? Its original form is fluid, it has no shape without a container. But once it is formed, it appears fixed and becomes difficult to reshape. As humans we are massively shaped by the world around us and sex is also just a product of our practical time and place in history. Any conception of sex and sexuality is both historically and culturally grounded.
A lot of us grew up being told that sex is the most natural thing in the world. That sex is the body’s natural language. I really hate the way we use the word natural. It has such authority. If something is deemed natural, you don’t question it, you know? And it’s because of a cultural myth such as this, that contributes to the fact that we are never taught to vocalise our desires or our boundaries. The rise of the #MeToo movement is a perfect example of that; it revealed that we didn’t have a language for something that basically half of the world population was feeling. It’s scary.
What is something that has helped you in your own sexuality?
Reading books, for sure. Knowledge! Many years of gaining and gathering knowledge. Getting access to new ways of thinking that I could apply to my own life. Knowledge is power as they say! That and leaving my career as a heterosexual behind (laughs). 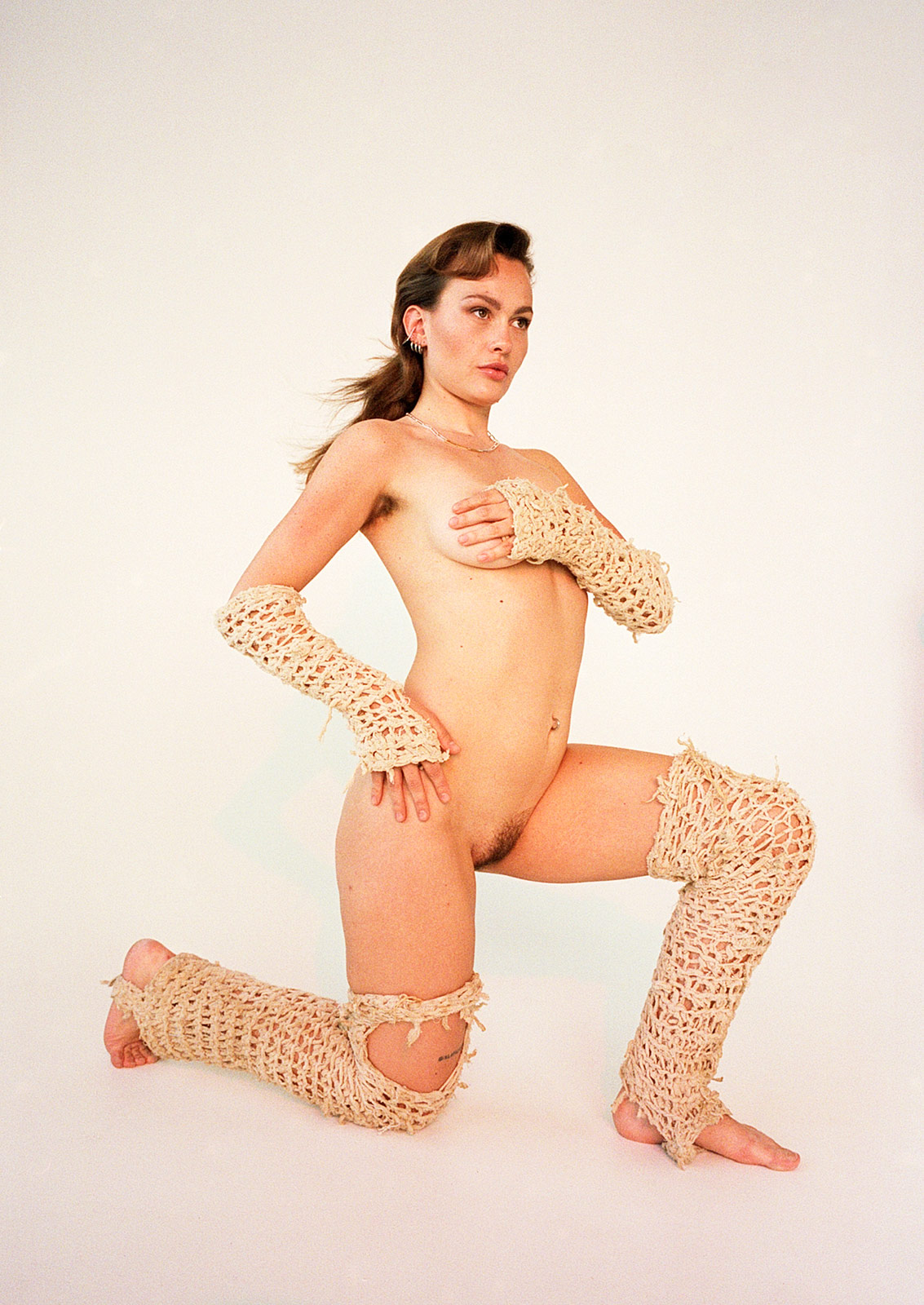 What are your thoughts on the perceptions of sexuality and pleasure in our current society?
A lot is happening, evolving and changing – for the better! It’s remarkable how conversations of body and pleasure politics have gotten a mainstream outlet. Especially because of that, I think it’s important to look very hard at anything that mass culture wants to stay invisible. Unfortunately, I think the current landscape of mainstream feminism pressures us to have certain attitudes towards sex. It’s very in style to be an outspoken liberated slut who loves sex. It’s a marker of progressive politics; framed as inherently liberating. It’s cool though, but I don’t think sex is inherently liberating for everyone.
Although I do truly believe consent culture is revolutionary, it almost feels like it’s become our duty to know exactly what we want and don't want. It is all of a sudden expected of us to vocalise our desires and boundaries. And speak them loud and clear. If you think about it, it’s quite a drastic shift of expectations. Especially considering the fact that we were never raised to priorities pleasure, sex on or own terms or sexual agency. Rather, we’ve been denied it. This sort of consent rhetoric also in a way indicates that we can only be safe from sexual violence if we know what we want. And truth is, we don’t always know what we want – not least because a misogynistic culture makes that very difficult. We also risk denying wishfully the fact that women are often punished for the very sexually assertive positions they are being urged to embody.
In a way we have moved from a culture that demands we keep sexuality hidden from view to one that demands we speak it out loud in the name of liberation. If we are to be truly sexually free, we need to do more than just celebrate sex. Liberation can also act as a regulation of its own! “Sometimes the repetition of good sentiment feels oppressive,” as Sara Ahmed says. I think sex-positive feminism should acknowledge that being a desired and desiring body in this world is really hard, one of the hardest things there is, and that our suffering is actually a very appropriate and informed reaction. And that our suffering doesn’t need to be discarded in the name of empowerment. It can be used as a material, a weight, a wedge, to jam that machinery and change those patterns.
So you don’t identify yourself as sex-positive?
No. In my opinion sex-positivity is outdated and slightly naive for our time. I like to use sex-critical or sex-neutral to describe my work and perspective. I like it because it’s a term that allows for a more nuanced understanding. Basically, it’s an attempt to move beyond the dichotomy of sex positive and sex negative. We’re so used to the polarised rhetoric of for and against, right and wrong, good and bad. Just look at how we debate in the media within politics. But, it's really hard not to slip into these thought patterns because binary thinking is so entrenched in our culture. Always oversimplified, never room for any ambiguity or complexity.
But sex is complicated. Desire is complicated. Simply having a body is complicated. In an era that ascribes [supposed] empowerment to everything, the idea of sex critical may seem radical, but it’s no new concept! In the 70s, Michael Foucault wrote The History of Sexuality in which he picked apart the supposed sexual revolution. He teasingly promised that “tomorrow sex will be good again” holding the prospect tantalisingly out of reach and arguing that good sex cannot simply be willed into existence. I’m amazed by how accurate this is. I think Foucault might in fact be the OG of sex-critical politics.
Who are some of the feminist icons that inspire your work?
The easy answer is artist Annie Sprinkle. I love her and I still can’t believe she wrote the foreword to my book. I think she is really smart and funny; two things I aspire to be myself. Other than that, I’m probably more influenced by thinkers rather than artists. Gayle Rubins, Paul Preciado, Leonore Tiefer are just a few of many.
Right now, I’m digging into the writings of Andrea Dworkin - leading figure of the anti-porn movement of the 80s. Obviously, I’m not into the whorephobia or the TERF elements of radical feminism. But I’m surprisingly learning a lot from her. I find it quite refreshing how she speaks so aggressively about how much she hates sex. I think she is a feminist who should come back into style. I’m also really into Ilona “Cicciolina” Staller right now, you know the pornstar who became Jeff Koons' wife and then a politician in the [Italian] parliament? She’s definitely iconic. I love that I just put Andrea Dworkin and Cicciolina in context together (laughs). 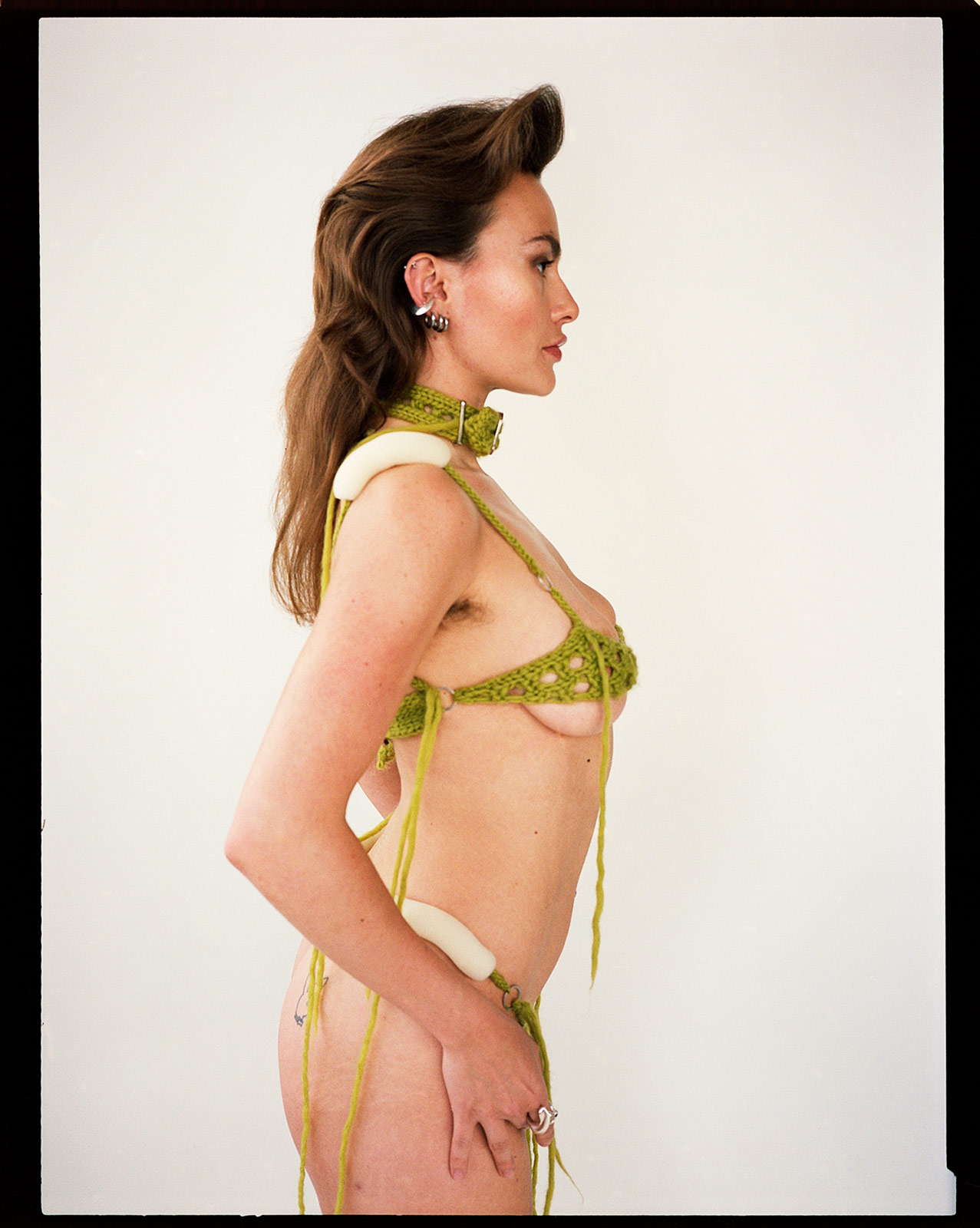 Tell me about your latest solo exhibition at Brandts Museum, what was Revenge Body about?
Revenge Body was a show exploring the relationship between economy and desire, how money and pleasure influence each other. Even though it was a museum solo show, it was arranged super last minute and then COVID-19 exploded in the middle of it. So, it was quite a chaotic process.
Long story short, my original idea with the exhibition was to do a show on sex robots in Las Vegas. But then the travel ban hit. So, the show ended up being a juxtaposition of different artworks instead. Some fun things came out of it: gigantic, glittery rotating peep-show tokens, a video of a walking, talking Satisfyer vibrator and a Marxist poem put together by 90s porn DVDs, amongst other things.
What are you working on right now?
I’m currently finishing my Master’s degree in Fine Arts at the Royal Danish Academy of Fine Arts in Copenhagen. These days I’m in my studio researching for forthcoming projects. This is my favorite phase of working. I love researching, it’s just an extravagant word for obsessing over stuff, isn't it? This week I've been looking into the potential transgressive power of schoolgirl skirts and trying to study it as a cultural object or phenomenon. 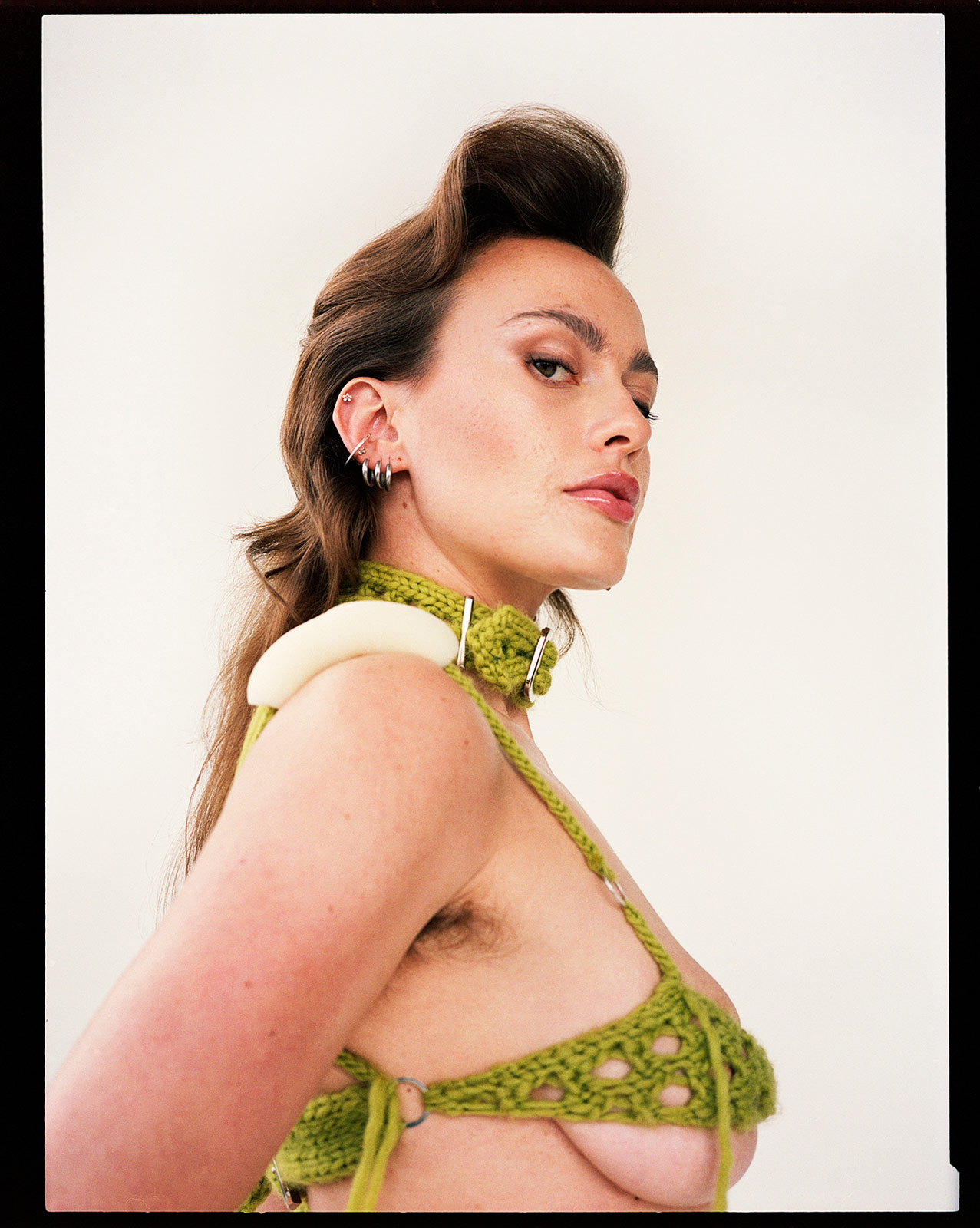 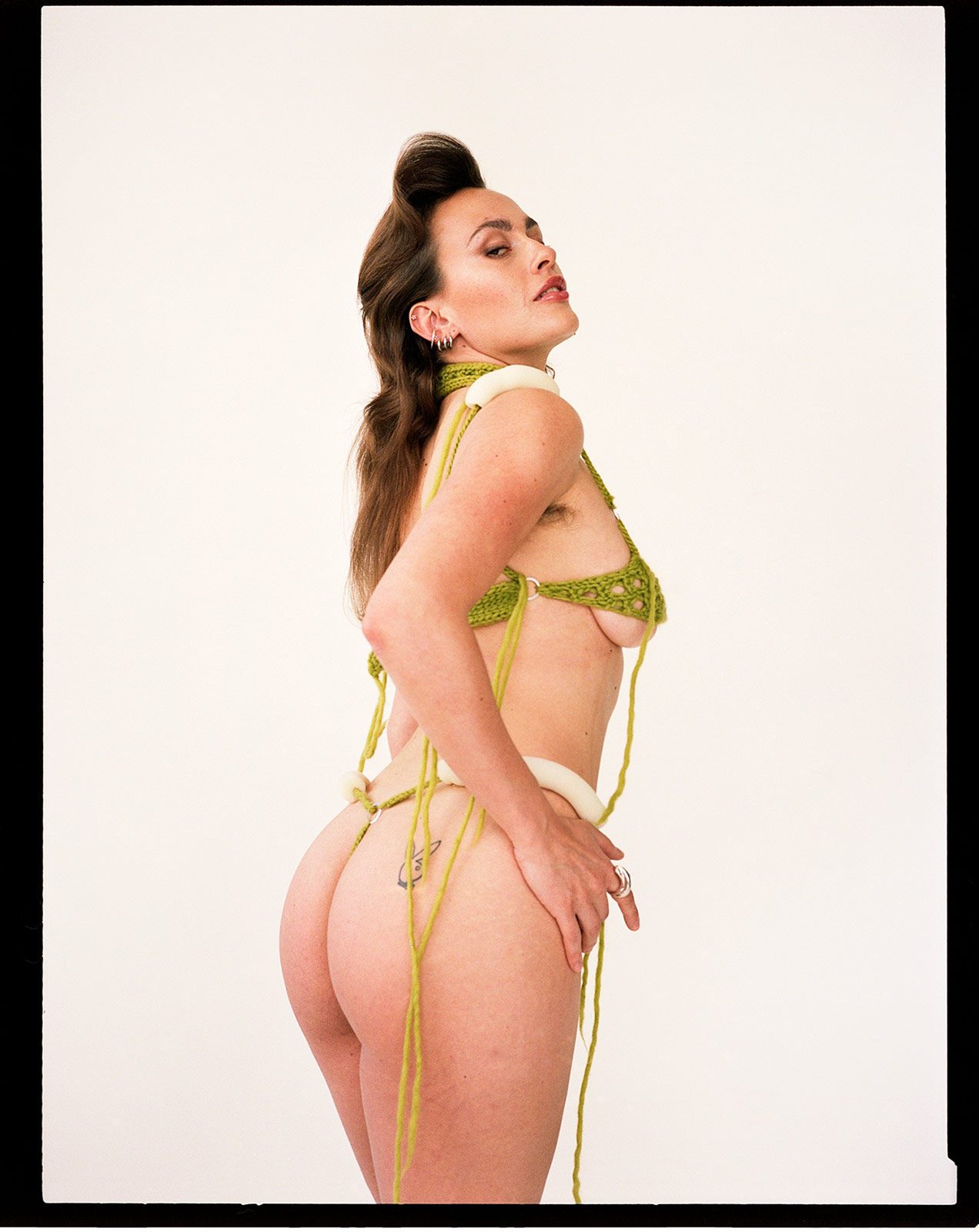 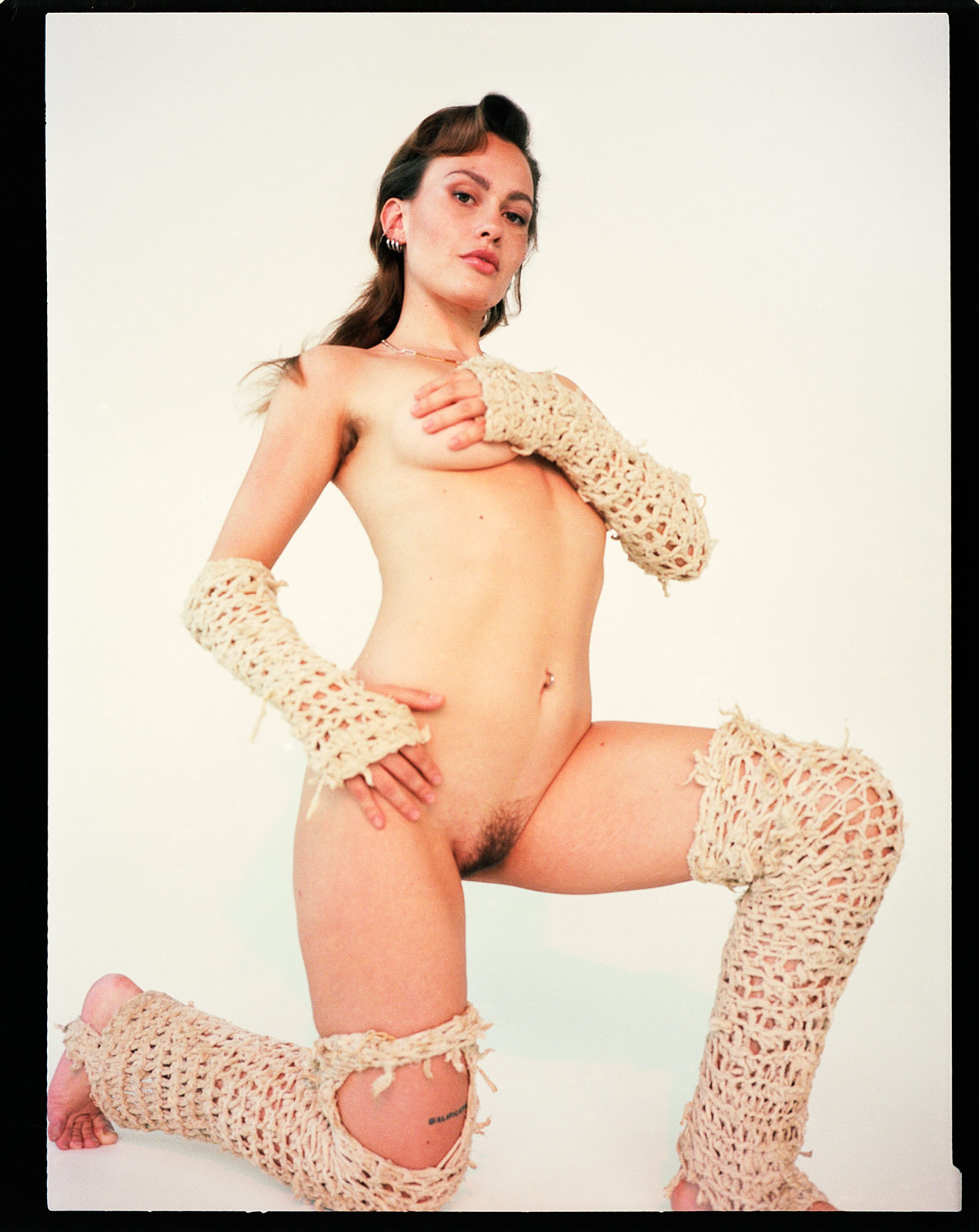 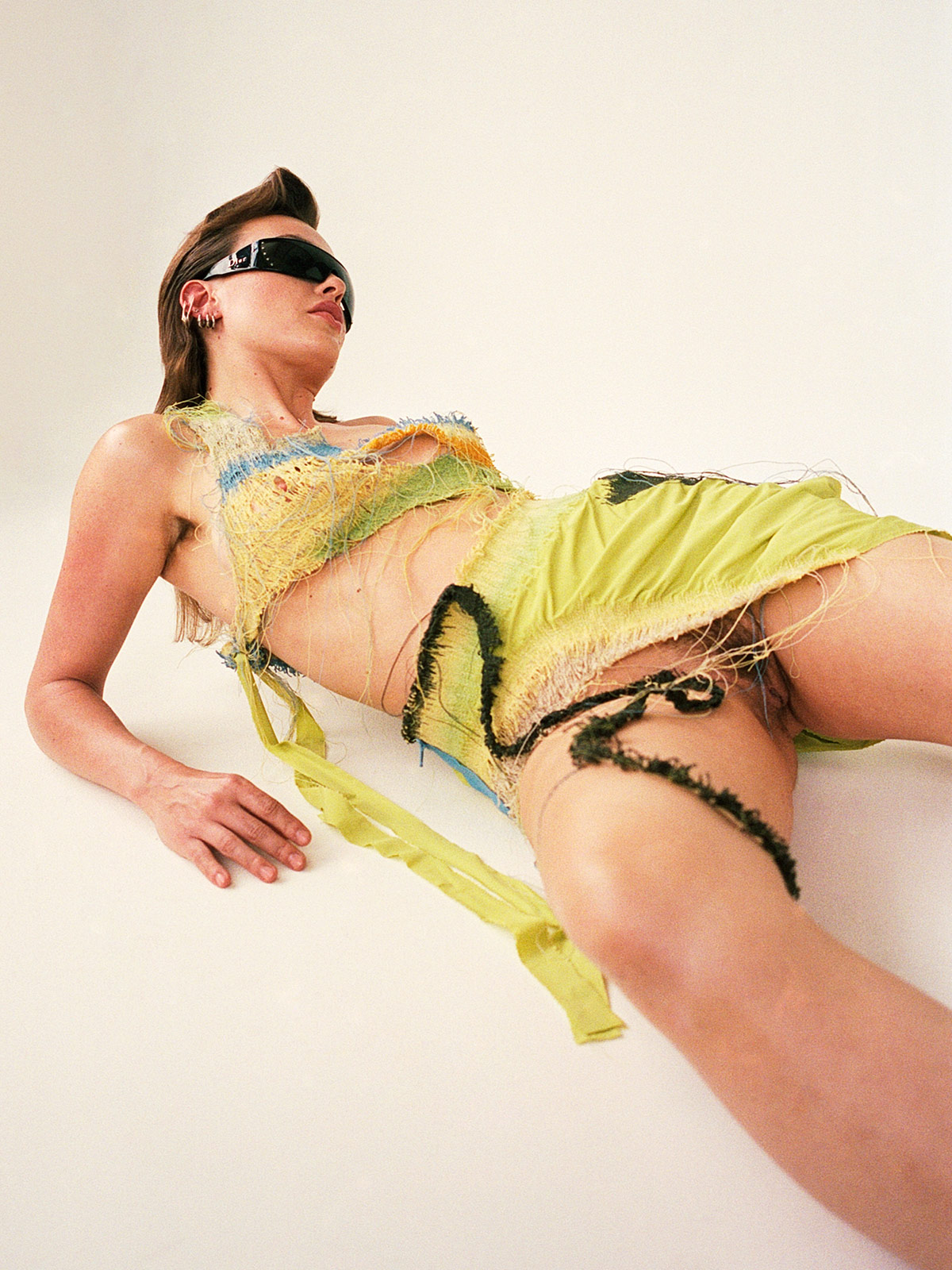 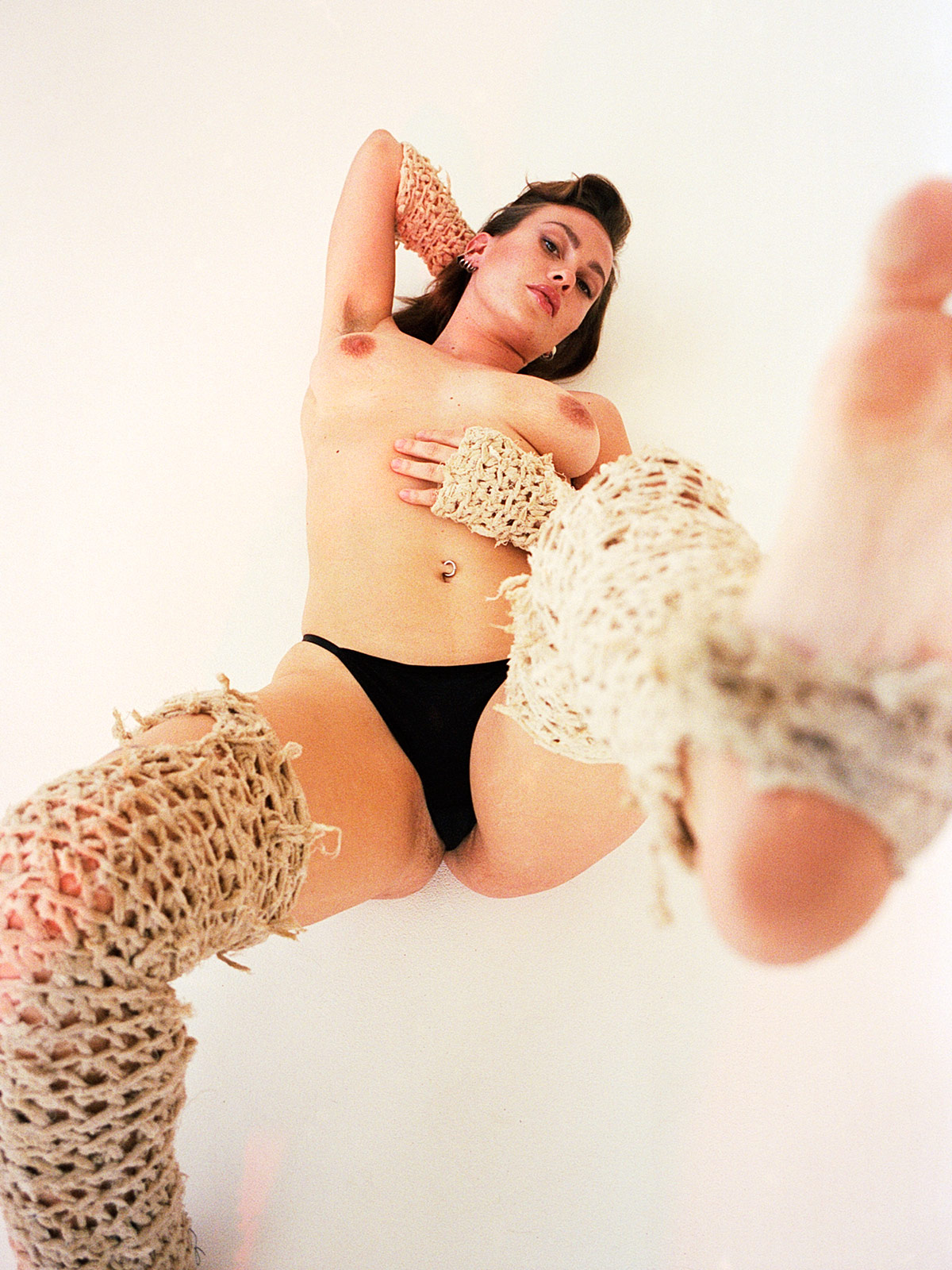 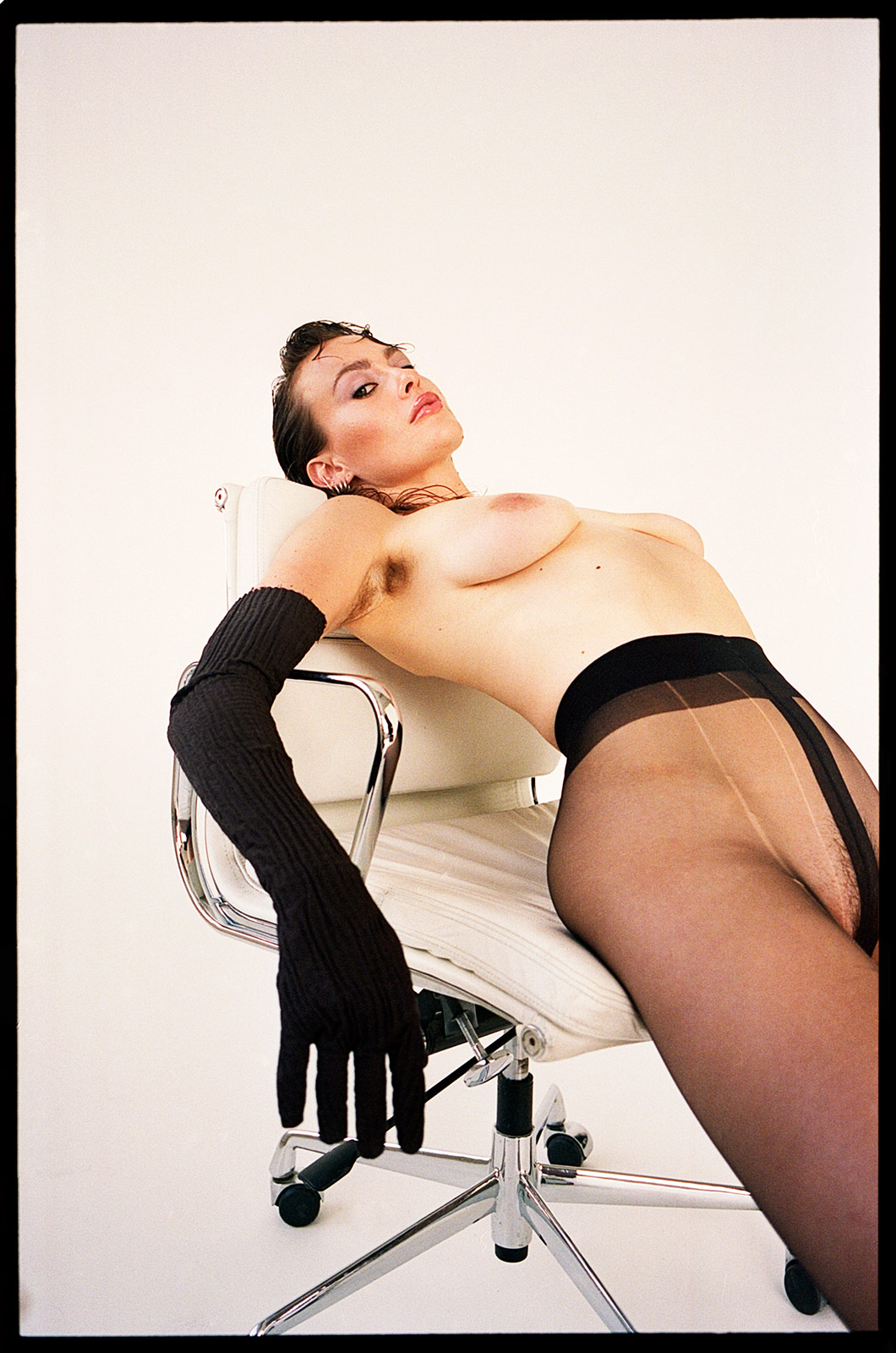 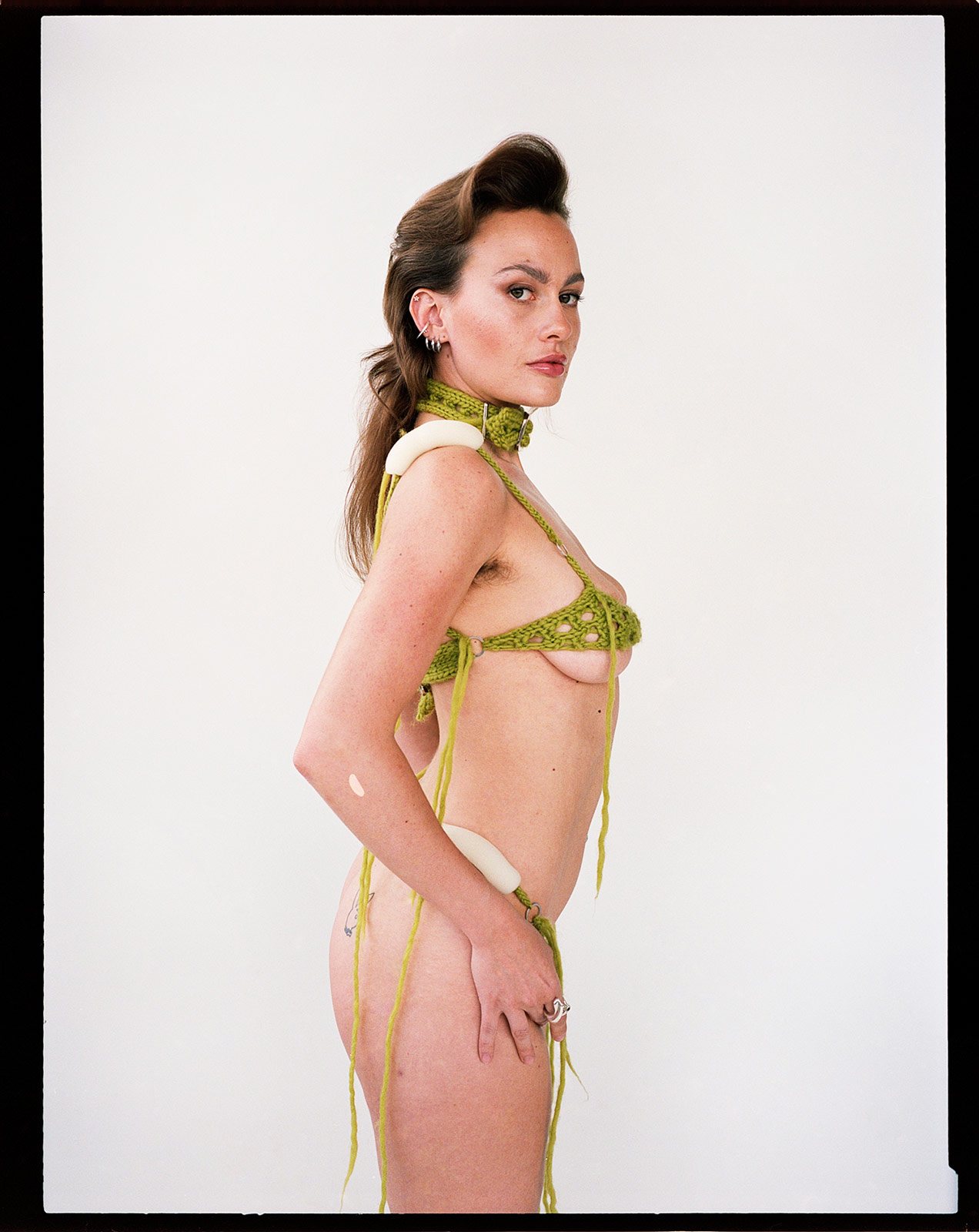 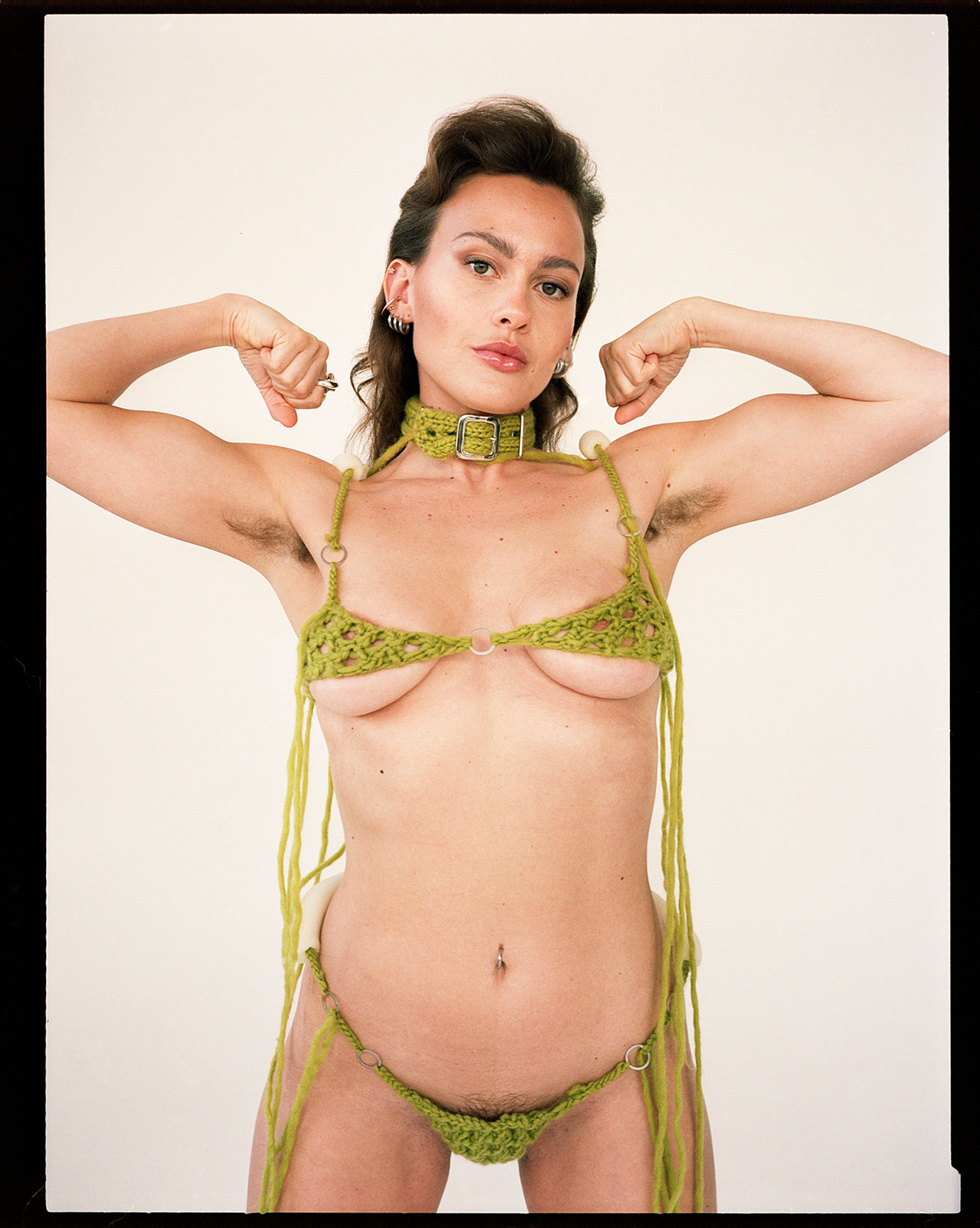