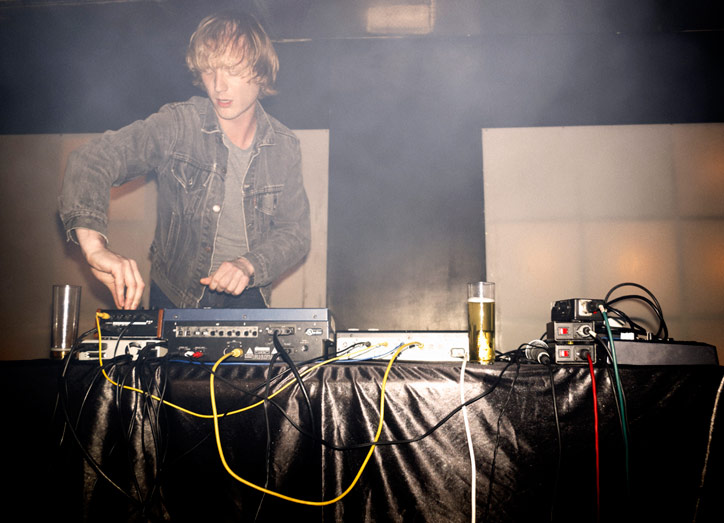 Damon Palermo's music released as Magic Touch has been steadily bumping from dance floors small to large, including appearances at Sonar, Unsound, Panorama Bar and CTM. A close listen reveals a peculiar blend of a Michigan upbringing and some formative years spent in San Francisco. Dashes of synthesizer are anachronistic, a bass oscillating between sly and sultry summon the ghosts of the nu-disco era. Curious to know who was behind the music, I had a brief correspondence just as Damon's latest release, "Just Wanna Feel" was due out on December 11th on 100% Silk. The new record is a collaboration with Tokyo producer Sapphire Slows and the result – a subdued and hazy seance destined to find dance's steady groove. Always in the present, look out for a Magic Touch track on the Derrick May & Jimmy Edgar "We Love Detroit" compilation out in early 2013.

Is your parent's record collection or an older sibling to blame for your interest in music?

My parents had a decent amount of records but not much disco at all. Maybe Saturday Night Fever and Barry White? They were more into '60 and '70s rock and Motown. I was first getting into music during the CD boom so my friends and I sort of turned away from that and started buying used vinyl. There were so many record stores in the Detroit area and everything was super cheap so it made sense. With time we got into more psychedelic music and our collections and interests were expanding. I also had an older sibling who turned me onto Derrick May, Plastikman, Spacetime Continuum, Aphex Twin, Autechre. There were a few clubs in Detroit that were 18 and over so I could go and see Derrick May and some of the other Detroit legends DJ.

So that's how you got into making dance music?

Growing up, my brother and his friends played various forms of rock music in our parents basement. I looked up to them and started wanting to play as well. A few of them taught me how to play drums and ended up leaving their gear behind when they went to college. Later on I'd visit them in college and they were more into electronic music anywhere from house, techno or disco. As I was getting older I remember two of the guys telling me not to bother with trying to form a band in University. Taking their advice I bought a YamahaSU700 for $600 at Guitar Center - which is where one of them worked at the time. With that I tried to make ambient, and noise but over time I got less into abstract/avant garde music and more into straight up house, techno and disco.

Is this a personal rehash project for you or just the music you felt like making?

My project, Magic Touch, has a lot of influences and references to past but I am not deliberately trying to rehash a particular era. A lot of the music I listen to is from the early '80s and '90s and even some from the '60s and '70s so if it comes out in my music that makes sense.

I didn't know you grew up around Detroit, how did you end up in San Francisco and end up getting into another of your side projects, Mi Ami?

I moved to San Francisco in 2004 and 2005 and met Daniel in 2006. Coincidentally we lived a few blocks from each other in San Francisco and started talking more after seeing each other around. We listened to a bunch of music together and decided to get a practice space and build up some equipment. With time, Jacob Long, who was also in Black Eyes, joined us on bass and we recorded our first 12" released on White Denim.

You have a new record out with Sapphire Slows how did this split come about and do you have any other collaborations coming in the future?

In January 2012 I heard Sapphire Slows True Breath EP on Not Not Fun. I was intrigued by the idea of combining Kinukos' vocals with house-hacienda inspired tracks. Shortly after I contacted Kinuko and we started to send ideas back and forth. At the time Just Wanna Feel was really rough without much structure. After Kinuko sent some vocal ideas it started to form. That track was created by myself and a close friend Nik Dawson (AKA Bookworms) who played the piano, and programmed the bass line on an SH-101. The second song "When I See You" was written and eventually mixed by Kinuko. I added more drums, sent her midi files to a Roland Alpha Juno1, and did some arranging. The rest of the record includes a Just Wanna Feel remix by I:Cube, and a dub version I did of When I See You. In the future I have a remix of I:Cube coming out, and some collaborations with Greeen Linez and hopefully some close pals in California and New York.