On the same page as JW Anderson 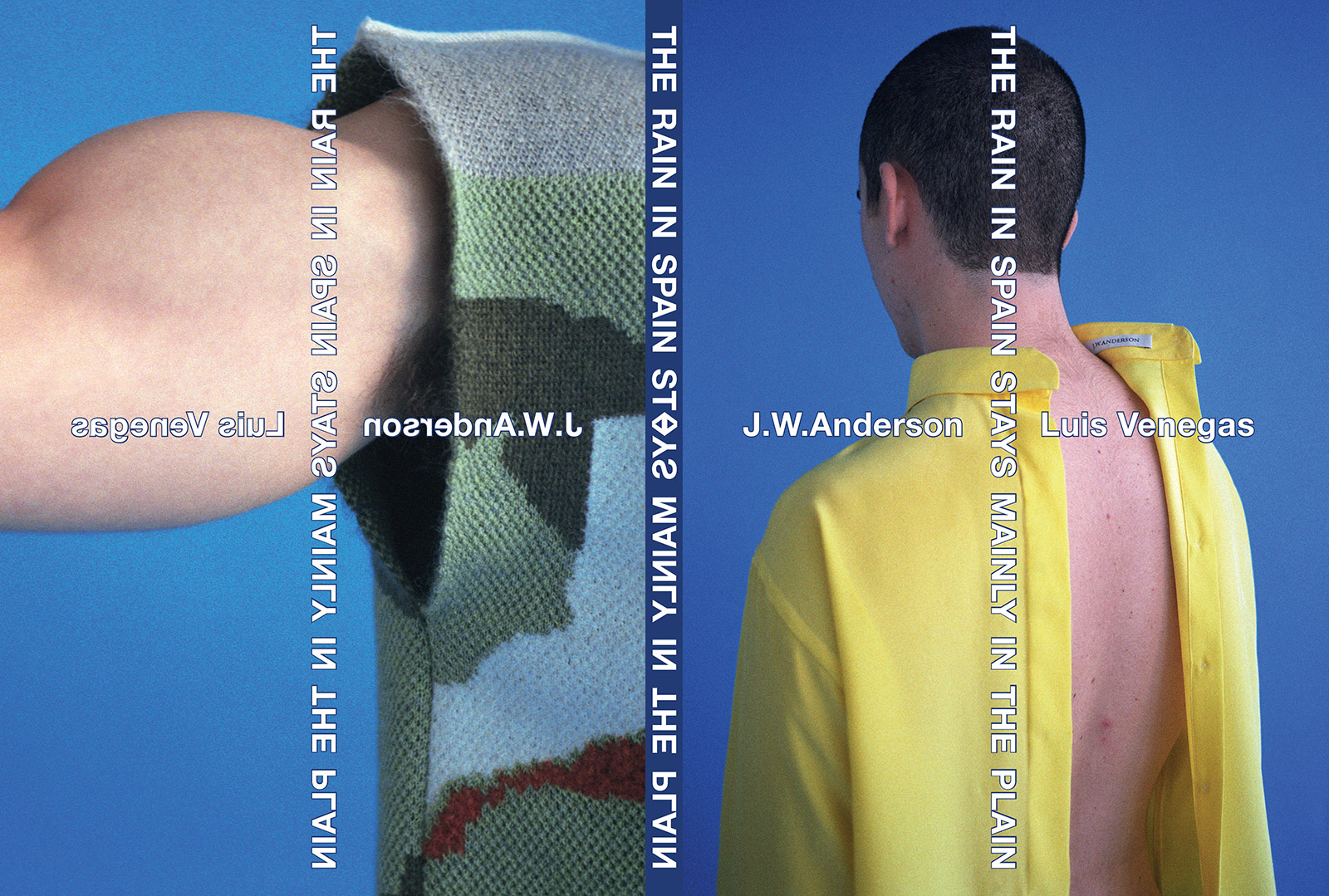 Entitled The Rain In Spain Stays Mainly In The Plain, here comes a creative hurricane by the acclaimed editor and publisher Luis Venegas staring at the innovative J.W. Anderson’s archives. One limited edition of 130 pages full of friends, photographed in his hometown (Madrid) that celebrates the first series of the Irish designer’s workshops. Luis Venegas, with his unstoppable passion for edition already proven in publications as Candy, Ey! or Fanzine 137, talked to us about his most recent project. And, as you would expect, freedom is recreated, new senses are called out and artistic intelligence echoes from each photo.

The Rain in Spain Stays Mainly in the Plain is a very mind-speculative title. Where did it come from? Could you share with us your own interpretation of it?

I'm afraid it's not that conceptual... It is the title of a fabulous song from the musical My Fair Lady, inspired by Pygmalion by the Irish author George Bernard Shaw. I've always loved that play and that specific song. You know, an English teacher teaching a girl how to speak properly using the sentence The Rain in Spain Stays Mainly in the Plain as a sample of correct pronunciation. I decided to photograph my Spanish friends wearing British clothes designed by an Irish fashion designer. So it kind of made sense for me, referencing so many different things just by using this long weird funny sentence.

And how did this project start? Who came up with the idea?

I met Jonathan 3 or 4 years ago. I guess it’s accurate to say we both like what the other does. So I was very happy and excited when he and his team contacted me last October for this project. They told me about the JWA Workshops and how they wanted me to be the first contributor to create something special for them. I had total freedom to create, so I decided to shoot my favourite pieces from the J.W.Anderson’s archives, worn by my favourite people and friends in Madrid. Some of them are well-known actors in Spain, some are anonymous people and the only link between them is that I do like them. I photographed all of them and we had lots of fun together. I also enjoyed very much the image editing process and the designing of the book itself.

For how long have you been working on this book?

I photographed everybody in December, a couple of weeks before Christmas. We went to printers in the North of Spain on 14th January; so the biggest challenge has been to get the 599 copies ready and delivered on time for the opening on 28th January at the JWA Workshops store in London last week!

Black and white photographs and a vibrant coloured cover: what was the concept behind that decision?

There are also many colorful photographs inside the book. No big concept behind, honestly... I just like how they look together. I just wanted it to be done as spontaneously as possible. I like thinking and planning, but I don't like to over-think about things, I prefer to go ahead and make them happen.

And why including stickers in this edition?

Working closely with J.W.Anderson and his collections must be a one-of-a-kind challenge. How is working with him like?

It has been a great joy. Jonathan is one of the most exciting creative minds working in fashion nowadays. It’s not just my opinion, it’s a fact. I mean, it’s undeniable that every time he does something new there’s a devoted audience –specially the younger fashionistas– excited to see what he has done and very often trying to understand or discussing the “why” behind his unexpected choices. That combination of experimentation plus mystery plus surprise seems to be irresistible.

Is there any particular piece of his collections that you considered a dream to photograph?

I've always loved the Menswear Fall/Winter 2013 collection he did with crop tops and shorts with ruffles for men. I loved to have those photographed on artist Leo Rydell Jost. By the way, Leo has also created nine special ephemeral compositions specially to be featured in this book.

With limited editions, one autograph can turn out to be magical in the maximum level. How did the book signing in London go?

It was super fun! Jonathan and I felt a bit like Danielle Steel and how she must feel when she is signing books for her fans (laughs).

You once said that independence equals freedom, and freedom equals happiness. And what are you calling happiness lately?

I call happiness spending time with my boyfriend, my dog, my family and my friends. And working on my magazines and many upcoming projects. I really love my job!