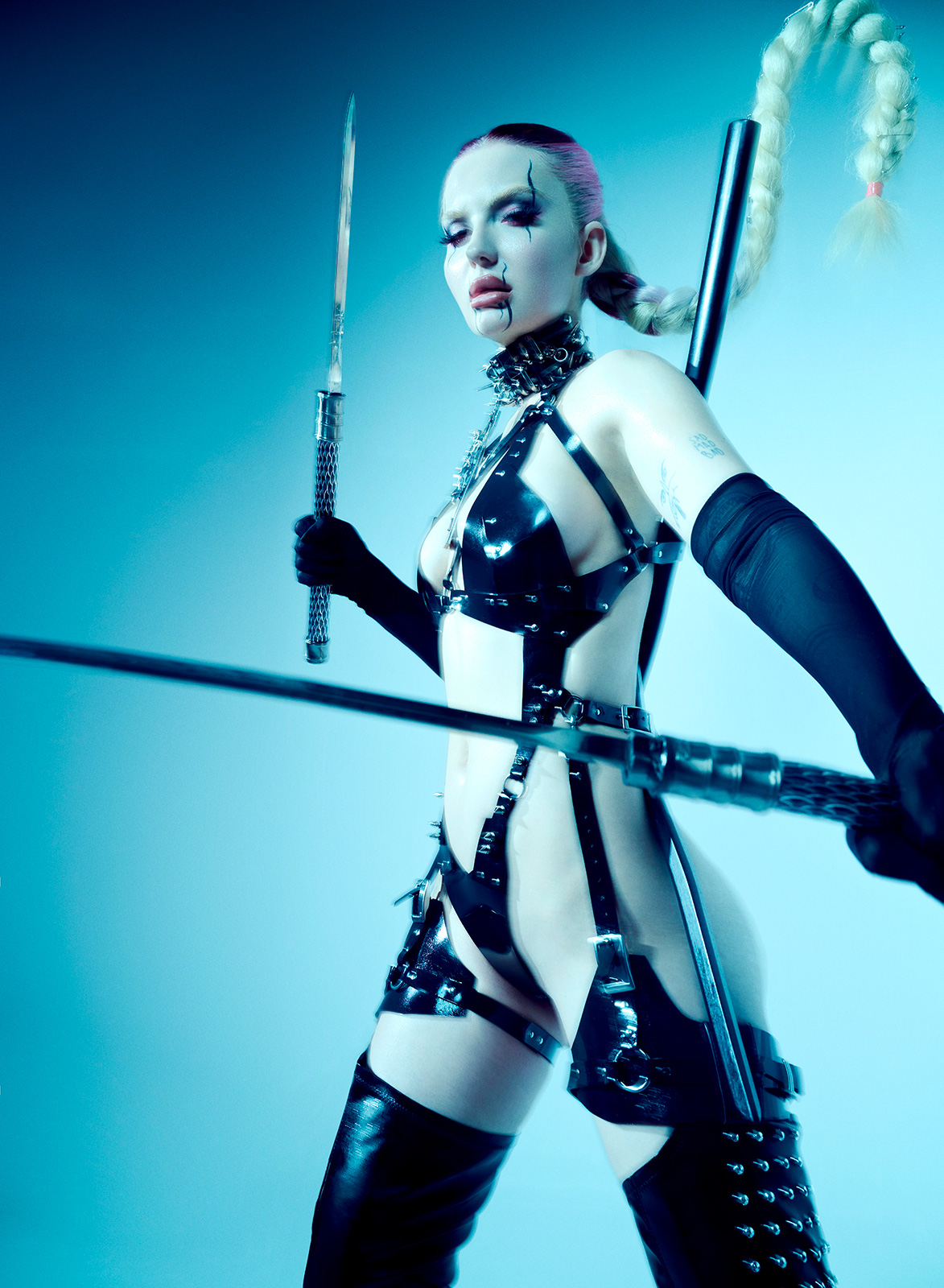 Are the limits that we impose on ourselves real or are they the result of the construction of human society? Are we perhaps the ones responsible for the barriers that we put up in our day to day life? And how can we overcome them to be totally free? Lucille Croft seems to have found the perfect formula. Now she introduces us to Patient X, the manifestation of her post-human form, restricted from her by the confines of industry no more and built on female empowerment. It’s a project that starts from the imagination, which is essential to the creative universe of the artist, and which comes along with her new EP, Patient X.
“The initial concept came to me for Patient X in a dream - I had a very immersive dream where I was the character in some sort of FPS game,” says Lucille Croft about her alter ego who goes beyond the earthly world and with whom we talk to in this interview on the occasion of the launch of her new work. While working on new personalities and characters that she will gradually reveal, the creative thus overcomes all the obstacles she has faced for the simple fact of being a woman in the music industry, allowing herself to experiment with everything that involves artistic creation and opening a new stage in her career.

“From May onwards I head to the US to play for the first time, where I’ll be performing a range of festivals - the two announced so far are Bonnaroo and Forecastle Festival! I truly can’t wait to perform the Patient X experience,” she tells us. A live show in which there will be no lack of tracks like Post Human, Kill The Machine or More Blood, all of them included in her new work.

Who are we talking to, Lucille Croft or her post-human form, Patient X? Where do you answer us from?
I could answer from either, but right now I’m Patient X. Lucille Croft still lives, she’s just not currently the dominant personality inside me. There will be new personalities and characters in the future too. Next time we talk I might be someone else entirely!
I must admit that when I read the manifesto that comes along with your new work, I was impressed. I feel as if I were talking to someone who goes beyond the earthly, who transcends humanity, with a character in whom imagination is essential. How do you feel?
I’m glad, that was absolutely the intention. Imagination is everything to me, I spent most of my life living inside my head, daydreaming, creating new worlds, characters and personalities within myself. Patient X absolutely transcends what it means to be human - she’s a post-human. What’s so exciting about this character is that anything is possible, nothing is too extreme, in the Patient X form I feel limitless.

“Having evolved from a biological state, Patient X feels no emotion and her intentions are clear,” we read in the press release. What are these intentions and goals?
The EP is like that of a game, each song is an individual mission for Patient X. The neurological procedure was meant to make me compliant - essentially a mind-control experiment, but it didn’t go exactly as planned, and it turned me into something more than human - a post-human character. My emotions and humanity stripped, leaving me with all kinds of new powers, with a mind like Harley Quinn. The mission is a path of revenge, but it’s a fun path for Patient X. The destruction, seduction, blood thirst, it’s all very exciting and enjoyable for a freshly made post-human! Almost like experiencing everything again for the first time. The mission explores me coming into my power and feeling empowered and confident as a woman in music.
Music, fashion and art coexist in Patient X EP. A work inspired by your experience as a woman in music. When did you start working on this new project?
Roughly a year or so ago. I’d work on it, then leave it, then come back to it. I knew I wanted to do an EP, and I wanted it to be a body of music, but also so much more. The initial concept came to me for Patient X in a dream - I had a very immersive dream where I was the character in some sort of FPS game. I was running through the mission, collecting different weapons, and hearing my songs as the soundtracks. A few days later I was laying on the floor in the dark, listening to the songs, trying to imagine the character, and I saw a rough blue X shape (you know, when you close your eyes and you see shapes and colours). It was a lot to put together - I did everything. The production, the lyrics and vocals (except for Kill The Machine), the styling, the creative direction - everything. I reached out to creatives to help me bring this to life, knowing it wasn’t within their budget, and they all loved the concept so much that they took it on. It was a lot of work - but I enjoyed every second, and now that it’s completed, I’m already working on the next body of work, as well as working on the live show concept for the tour!
And what would you highlight about the process of developing your post-human form, dangerously free and restricted by industry confines no more? Has there been anything especially difficult in this course?
The post-human form and Patient X represents me coming into my power, as a woman and as an artist, no longer restricted by anyone or anything. A big part of this was having to consider that I may alienate some options and burn some bridges, but I did it anyway. I wasn’t sure how creating a fictional character with such an abstract story would be received by my fans, as it’s definitely channelling a few different worlds outside of music. Patient X is an independent body of work, I had no label backing. so wasn’t sure how the support would go - if I’d get any playlisting if blogs would pick it up etc. I do however have an incredible team behind me on the management, distribution, agent and PR side, even all the creatives I worked with to bring this to life. The support has been incredible, I’m so mind blown and grateful.
Lucille, you talk about the restrictions and limitations that you have suffered throughout your musical career. What do you mean exactly?
Well, for starters, I’m a woman. Everything I do as an artist is usually questioned. If I can actually produce if I can actually DJ or perform, who comes up with the ideas behind my branding. It’s never-ending, but I’ve learnt to simply just stop giving a f*ck. I used to model a lot, that seems to take away the legitimacy of my music career for some - bizarre, right? My brand seems to be more on the controversial side, but to me, it’s just me feeling empowered and confident about myself - as everyone should feel, regardless of gender. Women can wear short skirts and make music too!
From Post Human to Out For Blood, five tracks make up this new EP. How would you define your current sound and what has this new work meant for you?
I’d say my current sound is quite industrial, raw and experimental. In this body of work, I think the music is quite heavy, tense, and in a sense, violent. A perfect soundtrack for an FPS game. This EP represents so much to me. In a way it’s a proof of concept, it’s my release from emotions I’ve held inside for a long time, and it’s the beginning of a very exciting path of extremism, eccentricity and who knows what else. It’s me proving to myself and to the world that I don’t need a label, that I can be a successful independent artist. I’m not opposed to labels in the future, I just had some bad experiences with some majors in the past. It’s the start of a new era, an immersive audio-visual experience, with fantasy, role-playing, acting, and this direction I think really leans into me going down a path of more experimentation with my sound. 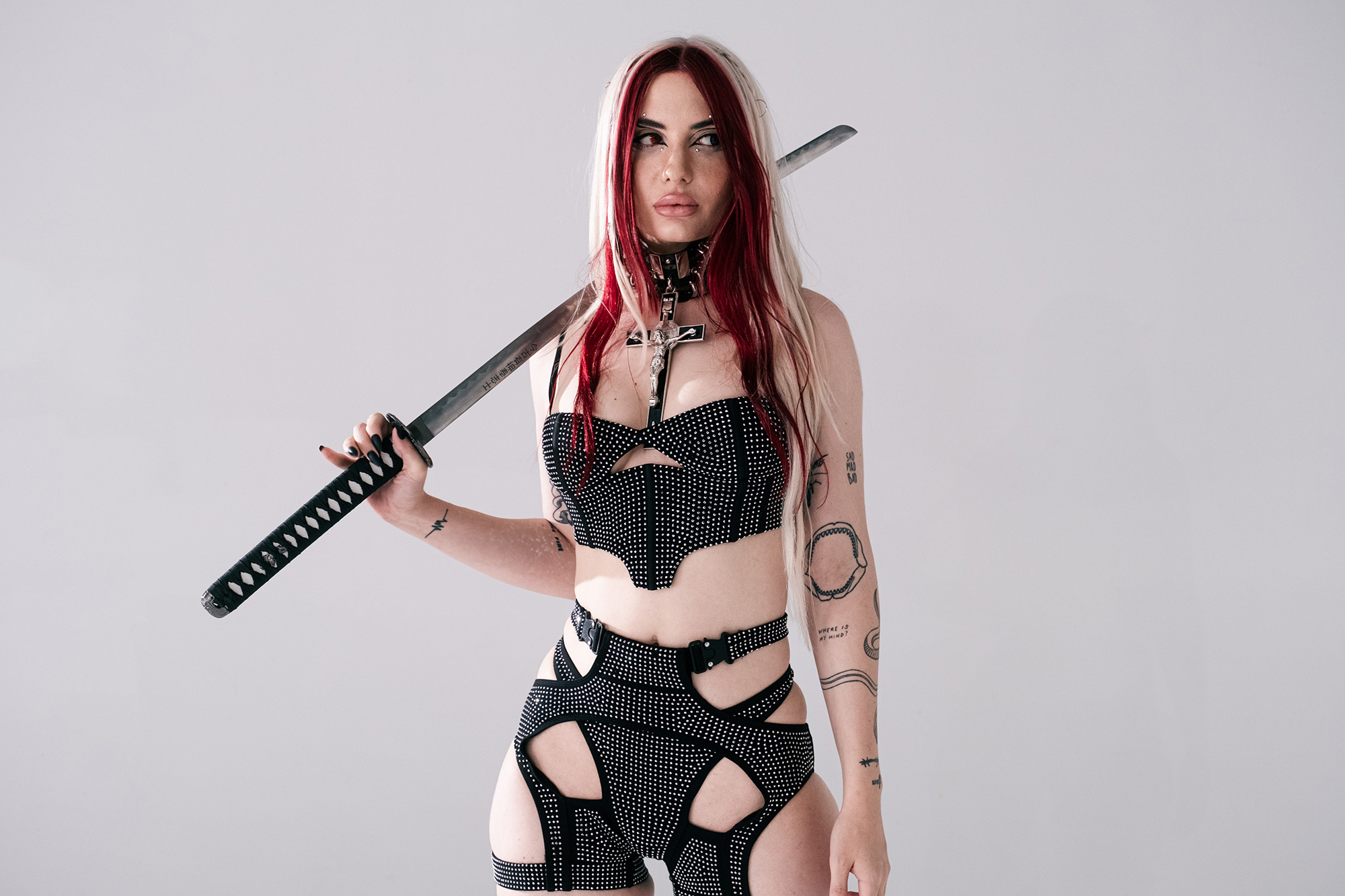 We also find some collaboration in this EP, right?
There’s only one collaborative song on this EP. Kill The Machine. I wrote with producer TMRRW (we’ve collaborated previously) and features Melbourne-based band Bad/Love. It was interesting how the Bad/Love feature came about. They actually reached out to me initially to model on their album cover. I knew the photographer and thought it sounded fun (the concept was me as a headless Venus statue), and on the shoot day they played some of their music. Immediately I wanted to work with them, the music was fantastic, we sent over the demo, and a week later the song was finished.
What role does aesthetics play in your creative project? You seem to enjoy experimenting and innovating.
Aesthetics are so important to me. My music is my art, so it’s very important that every element attached to it is treated with the same level of detail and energy. The artwork, the text, the story, the pitches, the video assets, everything. I absolutely love to experiment. The weirder, the better. I love to push boundaries with my aesthetic and ideas and give people a new experience. I hope that my live shows and my music will be an audio-visual experience that will leave people thinking what the f*ck just happened (but in a good way), and leave them with something they won’t forget.
I'm interested in knowing your opinion about the current music scene. What do you think about it? Is there enough diversity or is it governed too much by trends?
I’d definitely like to see more diversity, especially in the electronic world. To be blunt, I think a lot of artists in the electronic music scene are scared to take risks for the most part. People see a successful product and try to follow suit, instead of considering how to pave their own unique lane. Personally, I want to take my brand to such an extreme, outrageous, in-your-face, level. I look at artists like Bjork for inspiration, also Alexander McQueen, Nine Inch Nails, David Bowie, Grimes…
And what future awaits Patient X? What are your goals in the short and long term?
Short term - the mission. Once the blood thirst is satisfied, then it’s time for the next body of work, which is already in the works. From May onwards I head to the US to play for the first time, where I’ll be performing a range of festivals - the two announced so far are Bonnaroo and Forecastle Festival! I truly can’t wait to perform the Patient X experience. Long term, I’m excited to build out my brand more, with more immersive characters and stories to accompany my music, that will involve visuals, acting, fashion, art, and so much more. 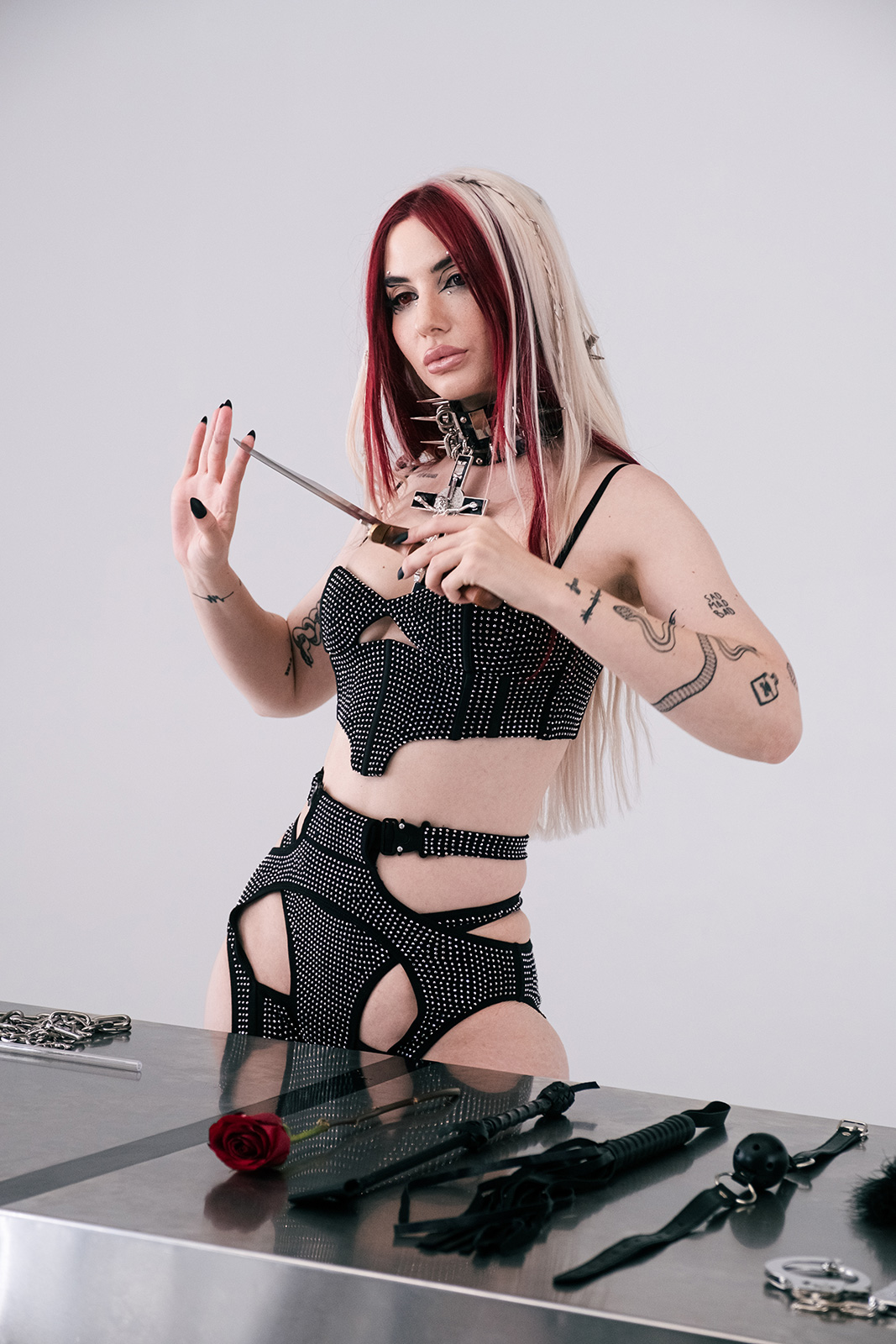