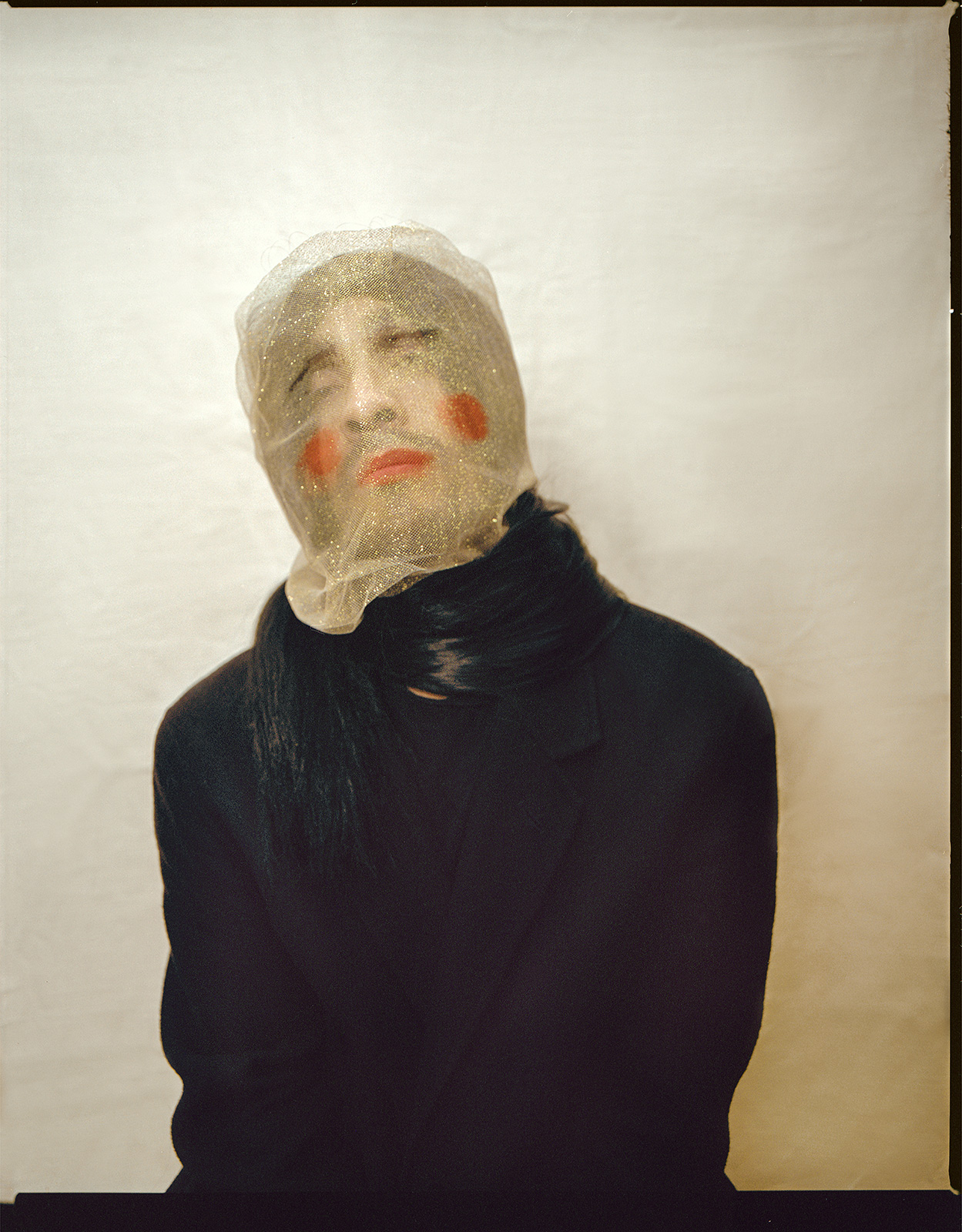 When we talk about photography we tend to do so from the perspective of aesthetics, often getting carried away by the visual elements that stand out in the foreground and forgetting what is involved in the act of photography itself. This type of art, like all others, possesses a symbolic force similar to that of a portrait painter or a writer who has been commissioned to write a biography. What story do I want to tell? What perspective do I want to give it? For Lucho Dávila, these questions go beyond what is merely in front of him at that exact moment. For him, it is all about heritage.
His project is based on reflections on questions of identity stemming from his Ecuadorian origins. To explore to what extent the Ecuador of today can be related to the Ecuador from before the Spanish colonisation. Goya has said it before, "the dream of reason produces monsters". Reason grounded in paternalistic dynamics and archaic violent concepts such as the white hero is one we reject.

Lucho, who bases his new series of works on traditional stories from his native Ecuador, is not a superstitious person either. His name on social media is closely linked to the number thirteen, which is known to correlate with bad luck. He looks straight into its eyes and says: "my only bad luck would be to lose my vision". He presents Fanesca, take a look. 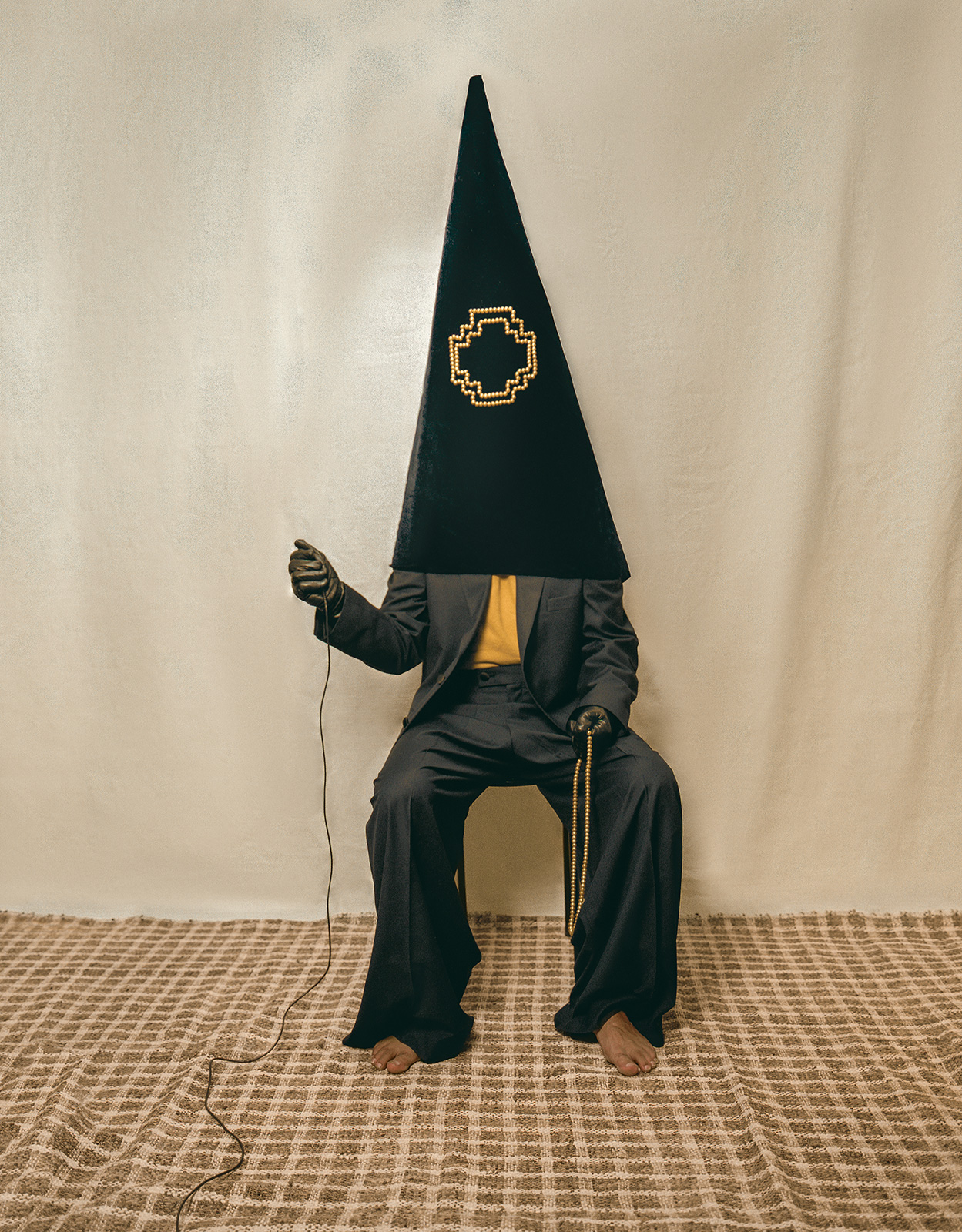 Lucho, this is the first time you've spoken to us. So what better way to introduce yourself than by talking about your connection to your craft? When did you connect with photography?
Thank you for having me today! I’m happy to connect with you since that’s what photography is about, connecting with people. I discovered photography around 2004 or 2005 on a train trip from Tokyo to Nagoya. I was born in Quito, Ecuador, where you are in the centre of the world, so in the Summer the sun is directly above you the whole time. When I discovered Summer side lightning, I discovered photography.
Two things make me particularly curious about you. Firstly, you confront superstition by taking thirteen (trece) as a pseudonym. Secondly, you use braille in your logo. Could you tell me about this?
Curiously enough, I started my brand back in 2013. With iamtrece both as a brand and as my nickname. As you pointed out, my logo is a braille word. It says thirteen in Spanish: trece. The concept behind the use of the number thirteen and its translation into braille has to do with my lack of belief in superstitions. Even though I'm afraid of losing my sight. I think you need to be able to see in order to work with light, don't you? With iamtrece I wanted to adopt the number thirteen as mine. And proof it is not related to bad luck, while at the same time secretly telling through my brand my deepest fear.
It is said that your work is the union of a strong and multifaceted vision. Does it have to do with having studied design before devoting yourself fully to photography?
I think that's right, there is something that on my YouTube channel [iamtrece tv] I call "the eye of the tiger" which is good taste and it's something we can learn by studying art in all its expressions. I think that coming from other disciplines related to art and visual communication has helped me because you need to have trained criteria in visual terms.
You work mostly shooting fashion editorials. You've lensed for Off-White, Lasserre, Rolling Stone, and Nylon, among others. You have also been published in The British Journal of Photography following a course you did with Nick Knight. How did that opportunity present itself? And why fashion photography?
I always wanted to do fashion photography, to me, it's an excuse to create surreal situations yet, at the same time, photography has some truth within. Photography has the power to convince us that what we are seeing is true because it is a frozen instant of a past moment. This is very important in fashion because when we see an image in magazines or campaigns we think it is real. I would like to say that these opportunities have presented themselves little by little, as my work has evolved and more people have found out about me. But that's not the case because, in photography, opportunities don't present themselves, you look for them and that's what I've done. For example, I've just recovered my Instagram account with 15,000 followers, after disappearing for 6 months due to hackers, and I've disappeared from the world. It may sound banal, but nowadays, with so much noise, these tools are important to create work opportunities and connections for yourself. 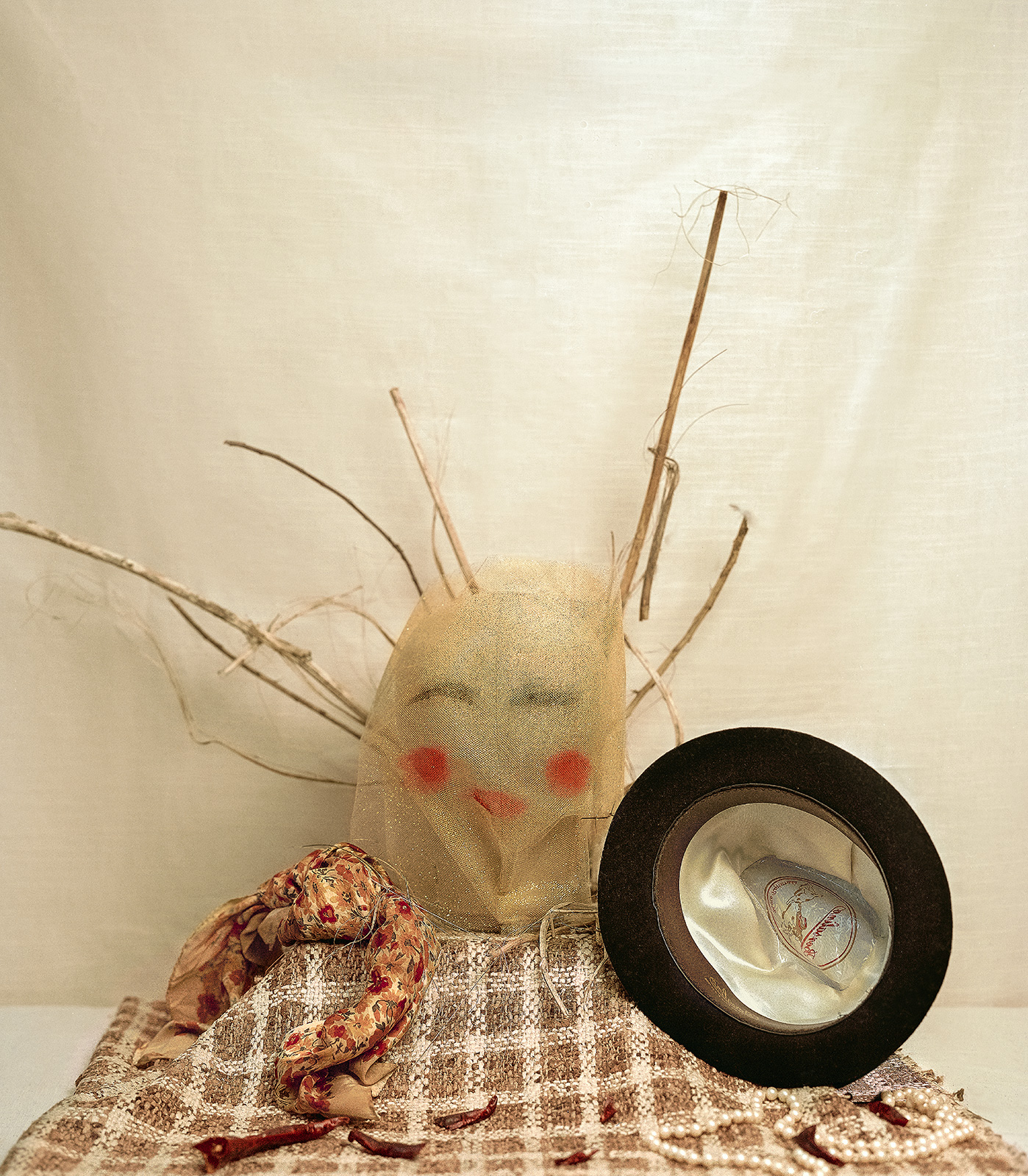 You have also been working in advertising agencies. What are the differences between using photography for commercial purposes and using it for artistic purposes? As I understand it, your art is a synonym for politics.
In advertising everything goes very fast, everything must be delivered yesterday, and you almost dance to the rhythm of whoever is paying. Without mentioning the over retouching in advertising campaigns. On the contrary, in my opinion, art and fashion allow you to show your vision and show what you can contribute to the world. Here you are hired to contribute with your ideas. I would say that now, my work is about identity more than politics. I try to avoid politics, I'm more interested in cultural identity as it's the subject of my body of work Fanesca. But my themes related to Latin America are always politicised.
In a video, you posted on your own YouTube channel you commented that the best time to be a photographer was now, but you also considered how difficult it is to dedicate yourself exclusively to it professionally. Could you tell me about this?
Once, whilst directing a documentary, the interviewee said, "whoever hires me doesn't know why he's hiring me" in a heritage restoration context. I think we have it easy as photographers because we have so many free digital tools and online knowledge. Plus huge exposure platforms like Instagram and other networks to show our work, not to mention that now you don't need to study coding to make a website. Before photographers had a physical portfolio and their showcases to the world were print magazines.
But it’s more complex.
At the same time, it's more complex because now everyone is a photographer, so the competition is huge. On top of that, most of the people who are in charge of hiring us, don't understand art. They go for the cheapest, the friend or the popular photographer. When those indicators are not necessarily related to good work. In other words, most don't understand why some photographers charge more than others. Then you see all the magazines with the same images and all the brands with the same campaigns, everything is the same because they prefer to pay (if paid) for a copy, instead of an idea.
You are currently presenting your latest project, Fanesca, where you revisit your equatorial heritage based on a critical view of the influence of external factors on current Latin American identities. Could you tell me a little more about this?
Fanesca is something that has been maturing since 2019. Through this series, I reﬂect on mestizaje in Latin America and I take Ecuador and my body as a case study. Fancesca is an autoethnographic exploration, my identity is something I want to analyse at the moment. After living several years in Quito, Madrid, and now London you ask yourself questions like, where is home? Fanesca looks at how a society's identity is aﬀected by inﬂuences from dominant countries in terms of fashion and how you leave or adapt your traditions and, through this I analyse my identity. Take for example the Magdalena in Spain, everyone started to call cupcakes. In this body of work, you can ﬁnd this in the traditional Ecuadorian characters that I represent from my point of view with handmade masks crafted by me and contemporary outfits. 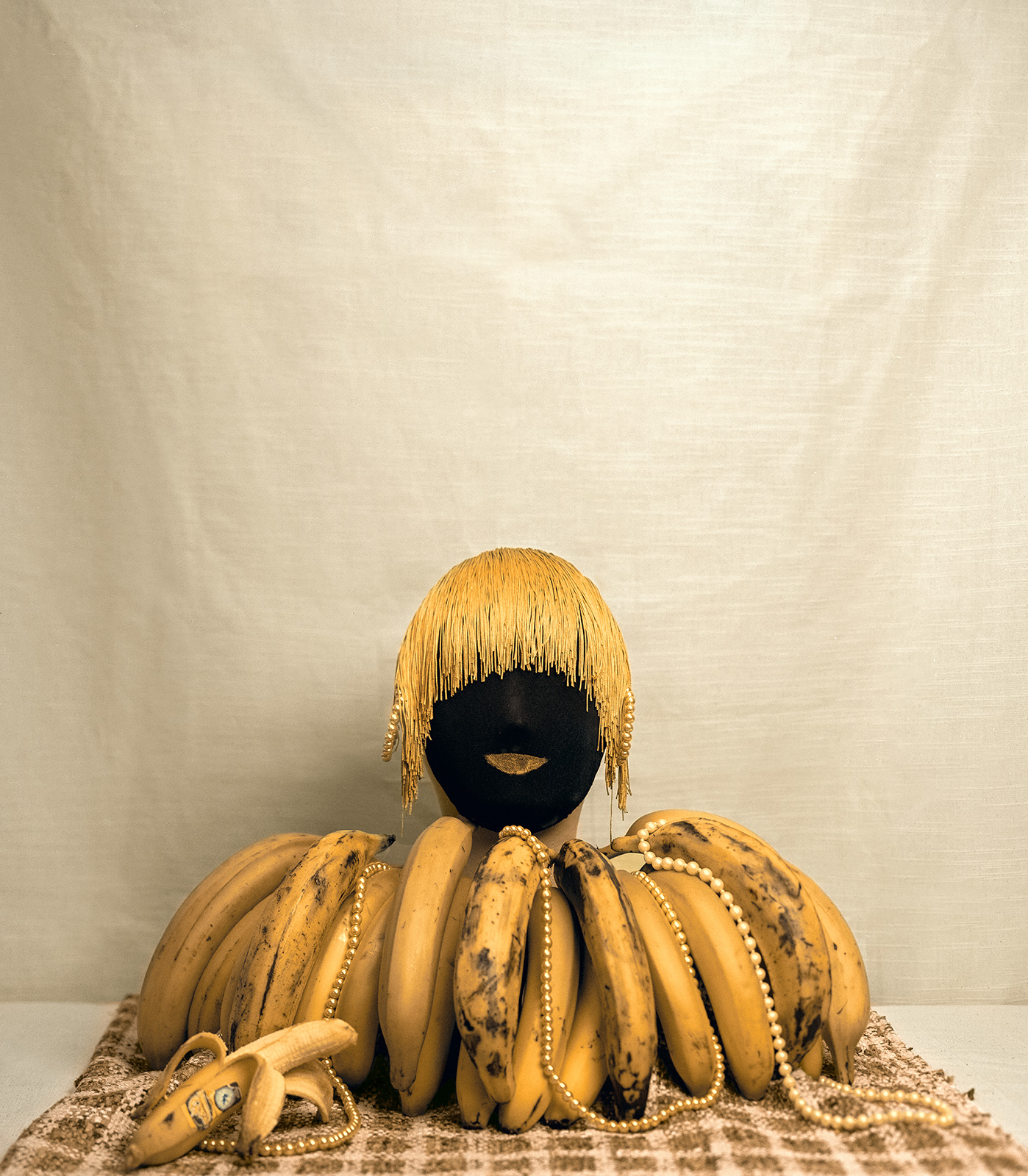 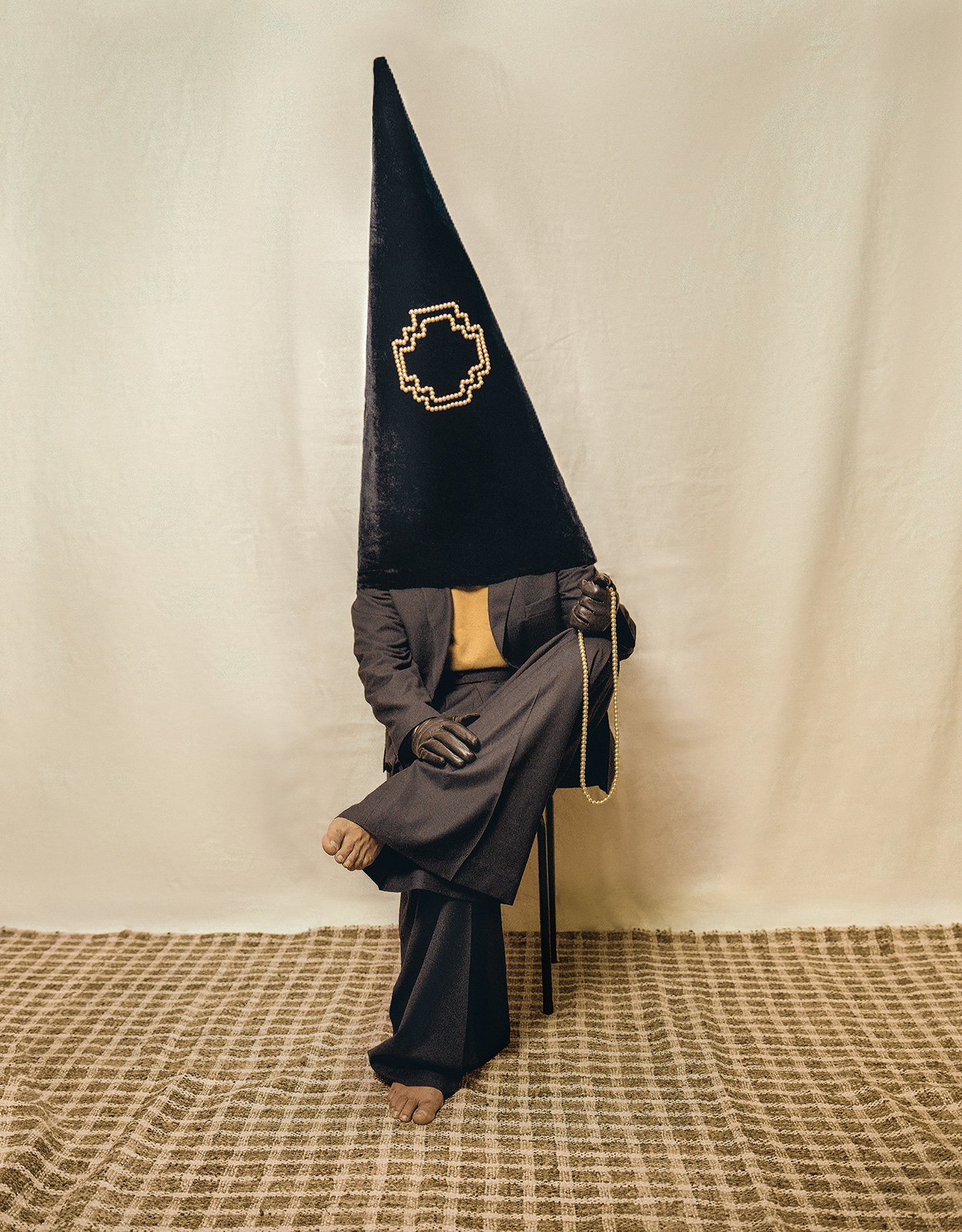 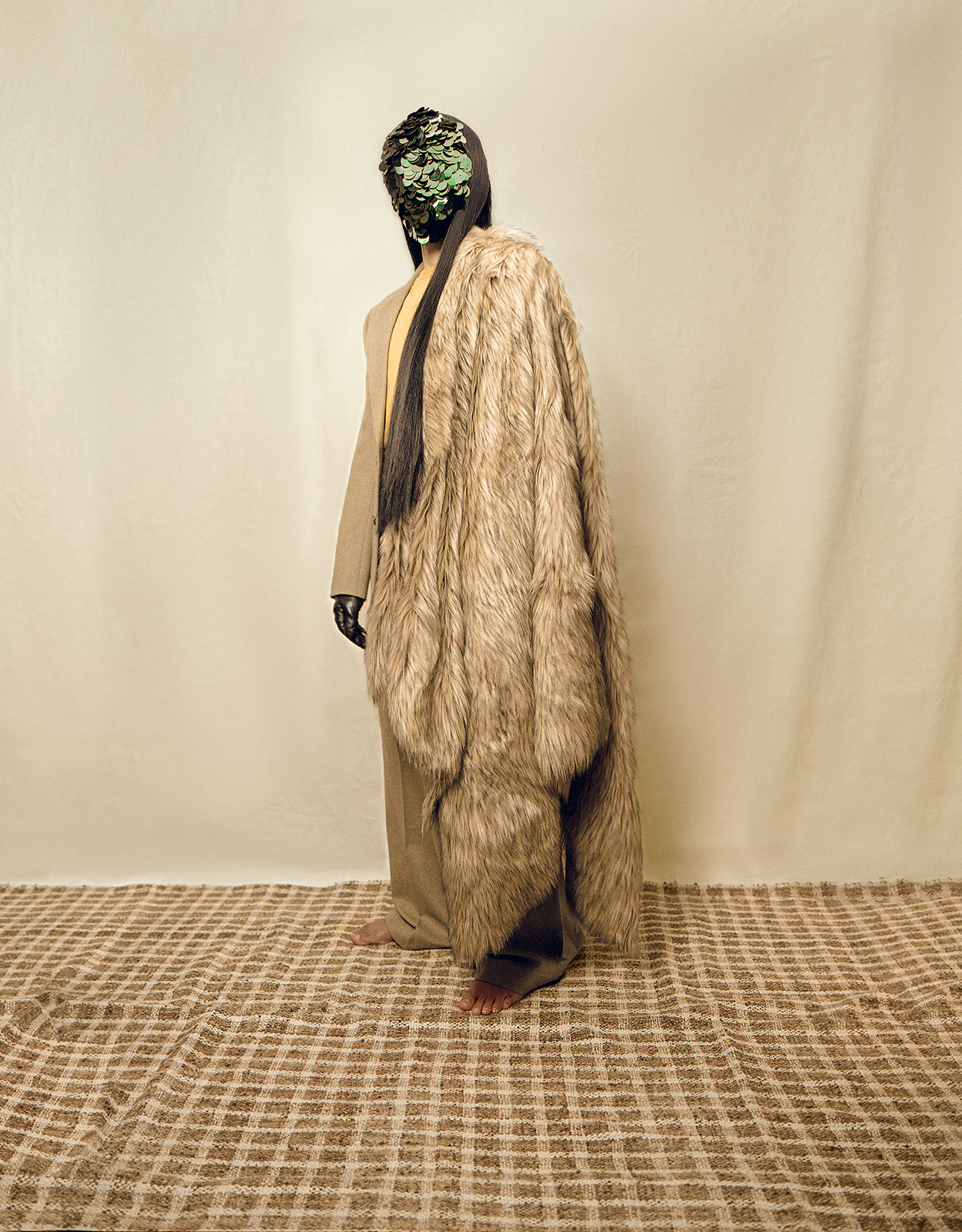 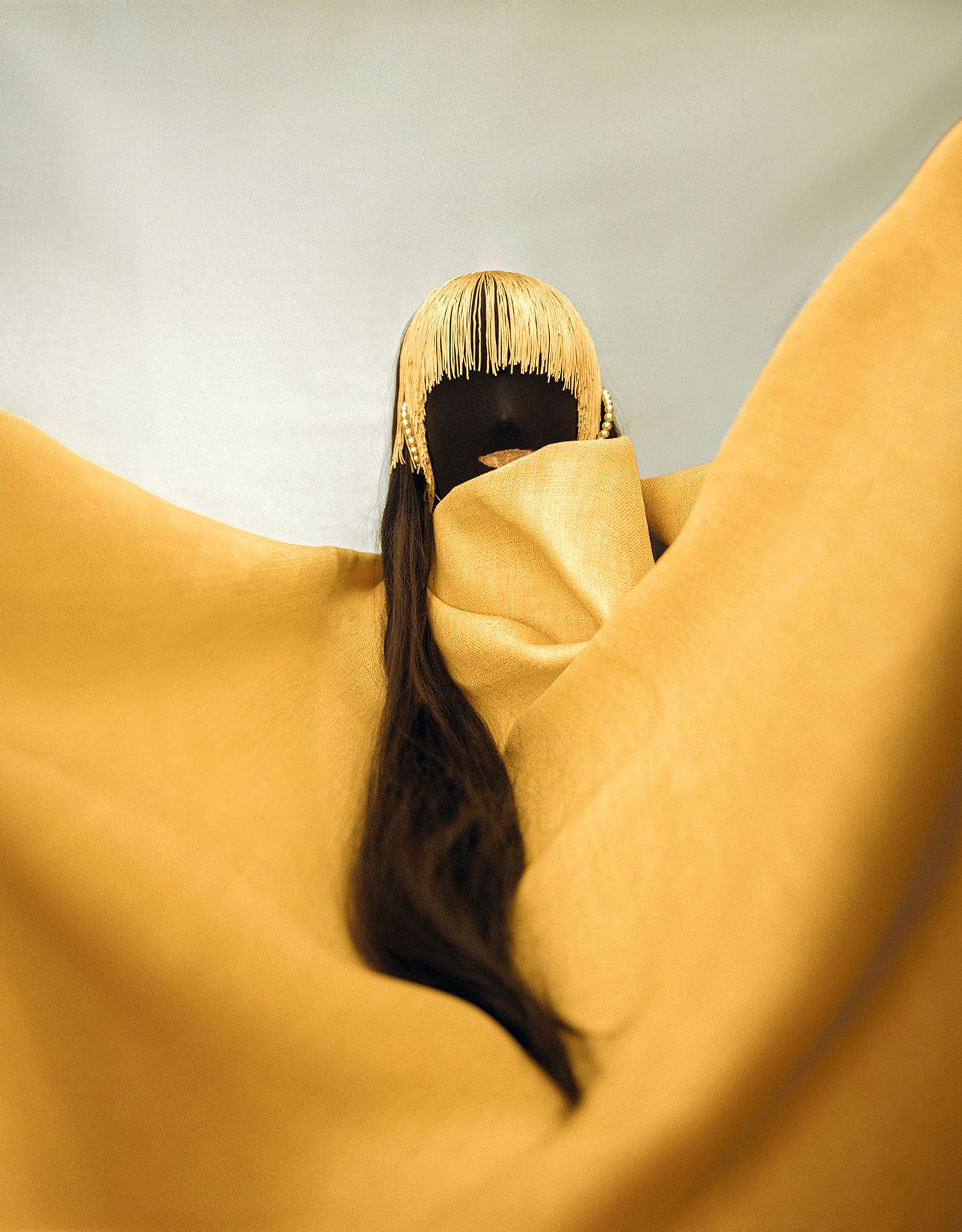 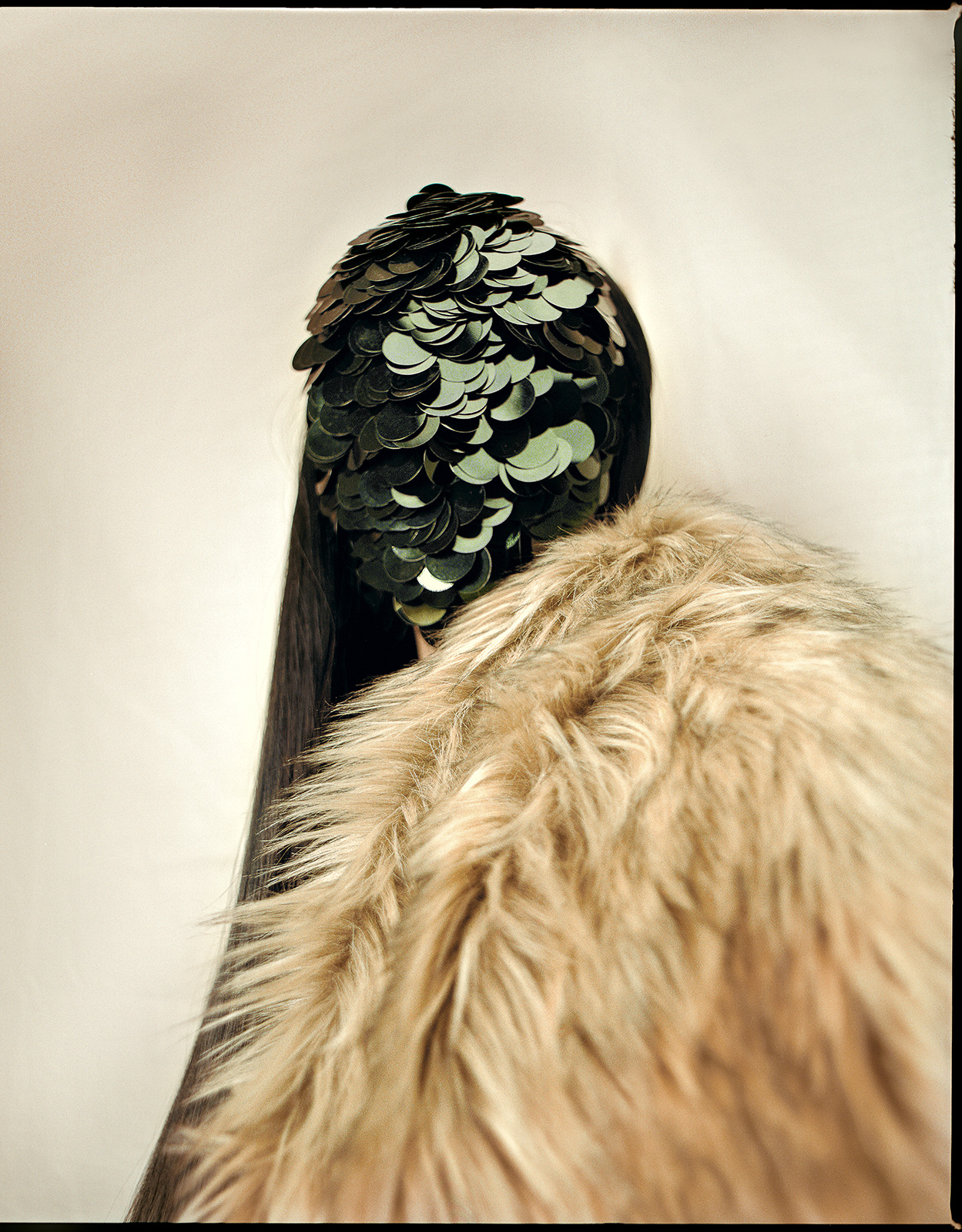 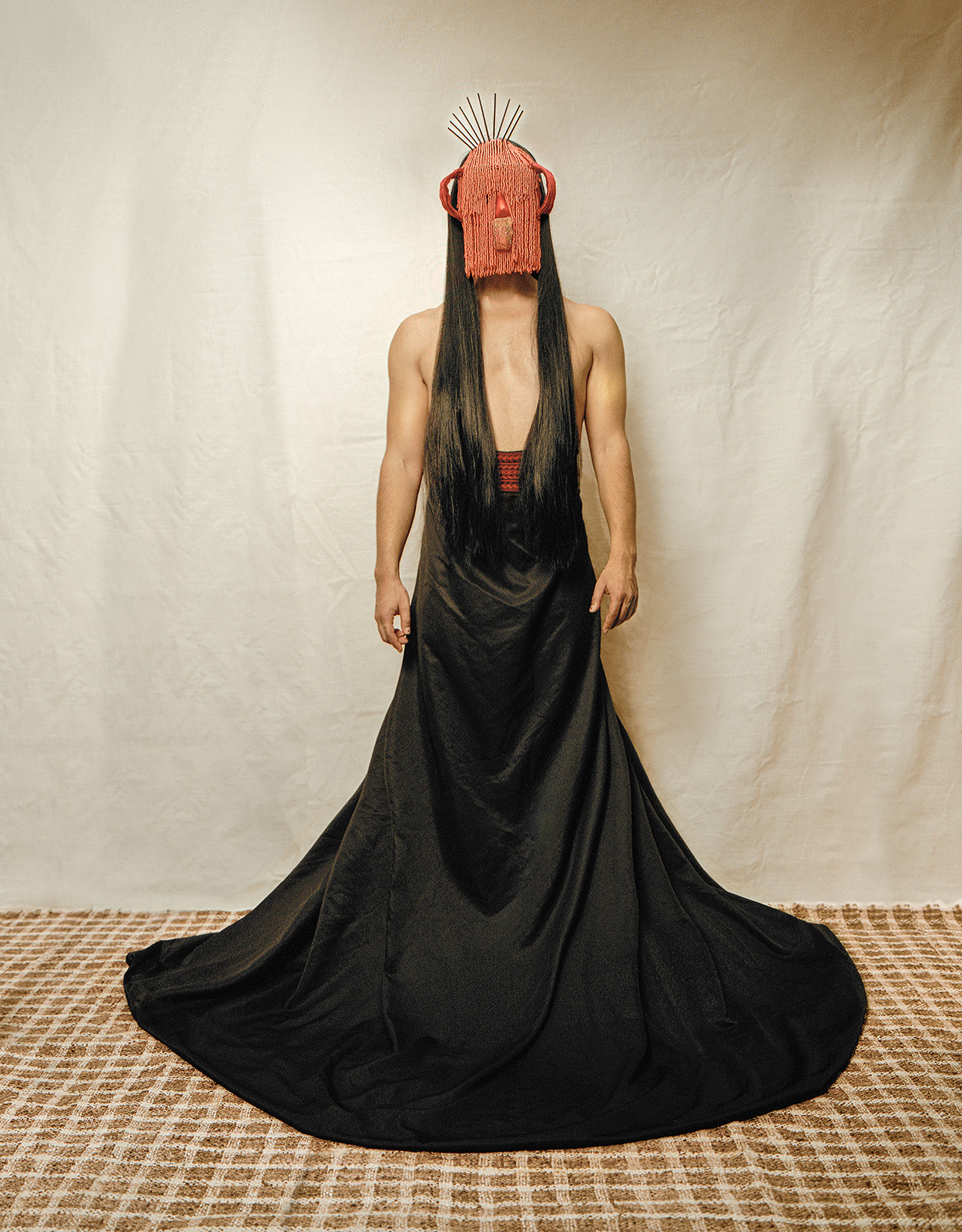 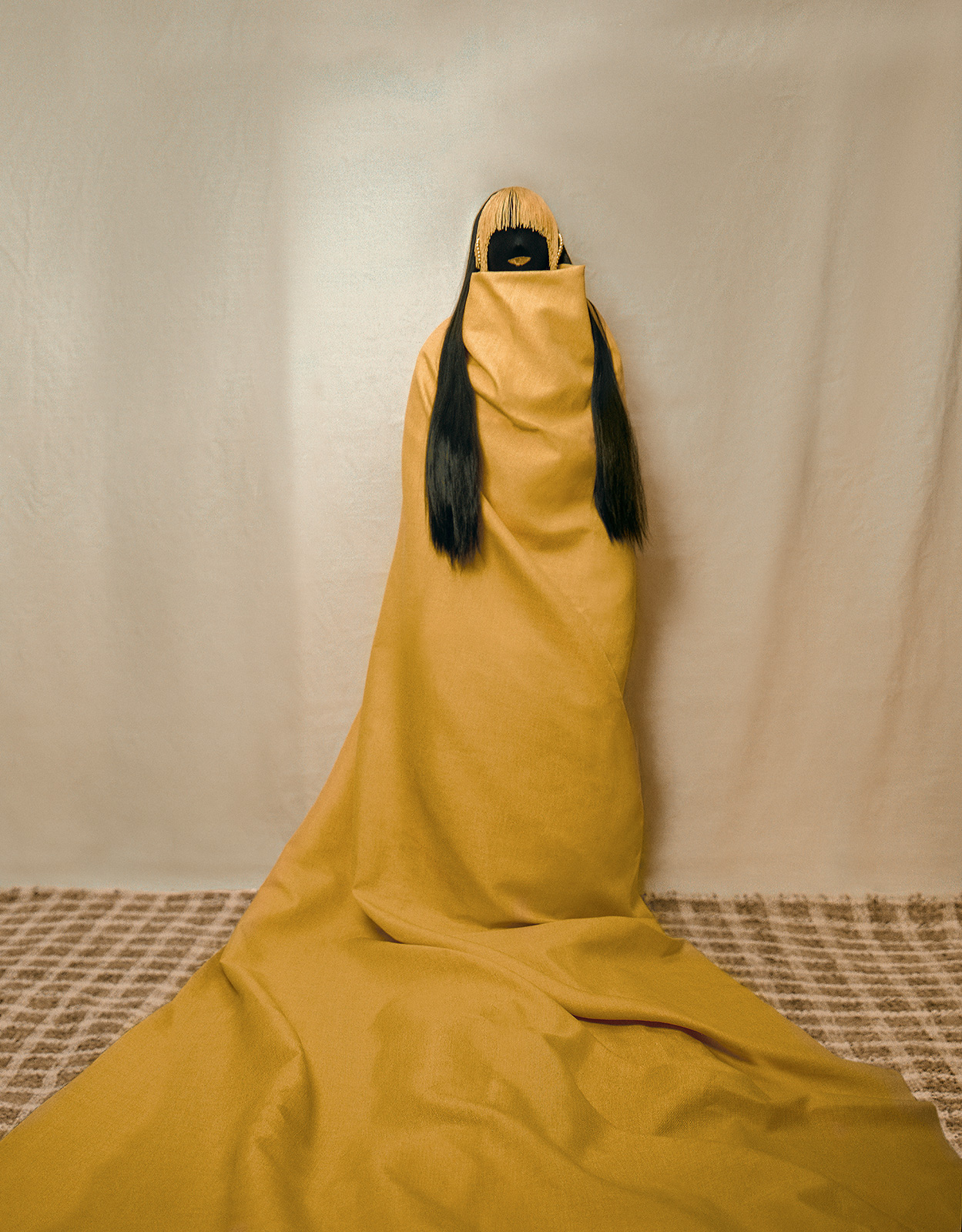 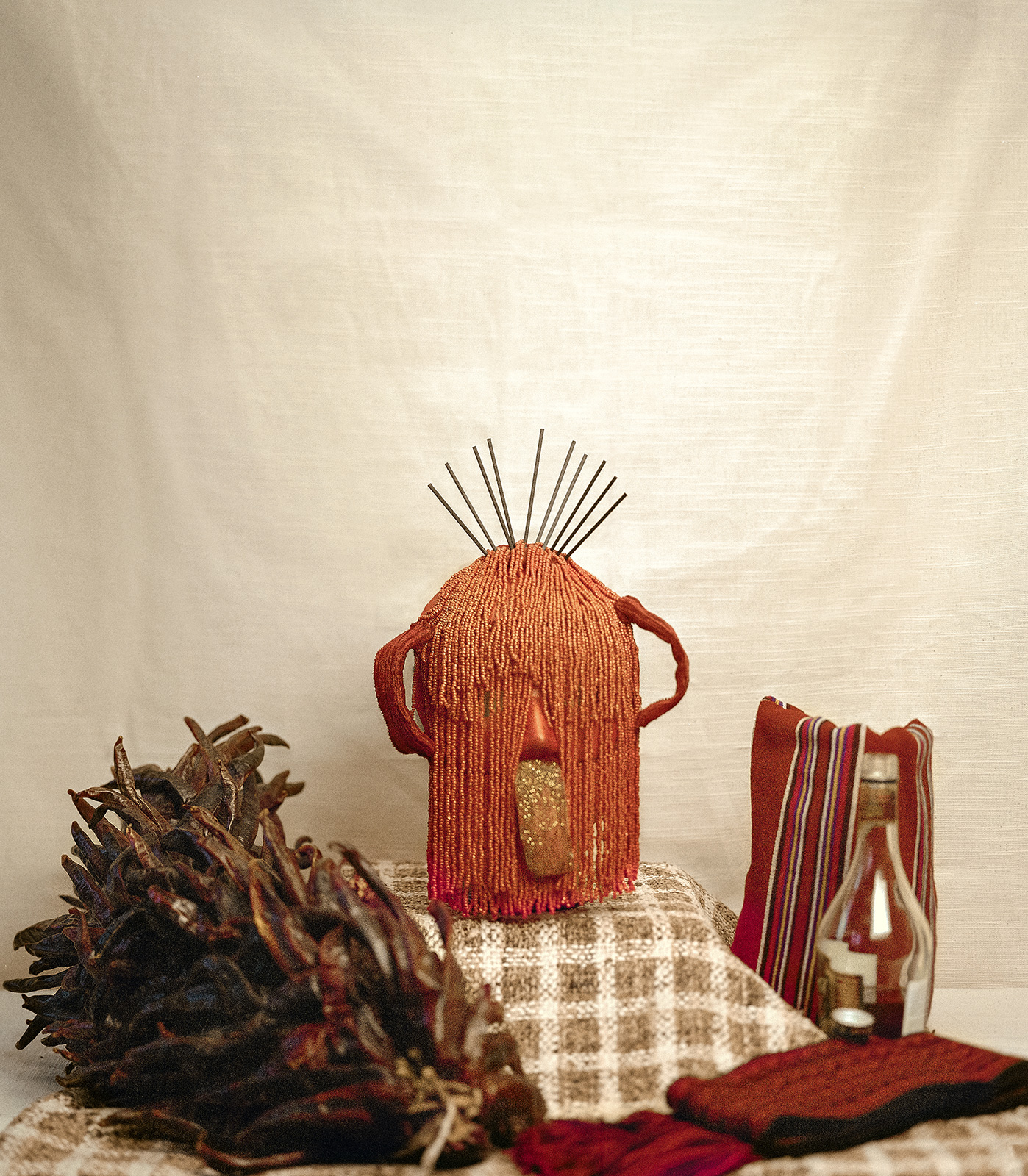 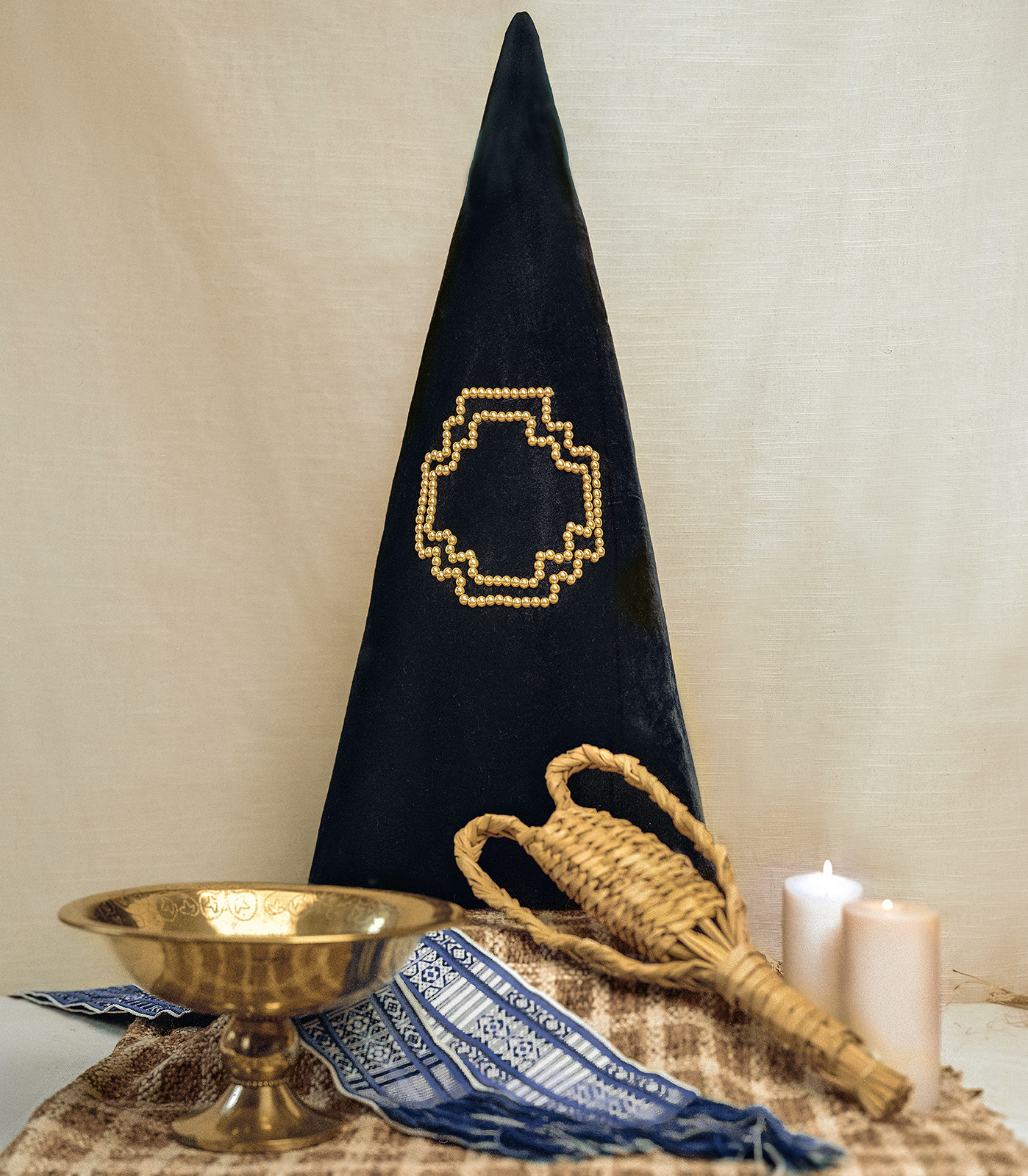