Up And In, In London And Berlin 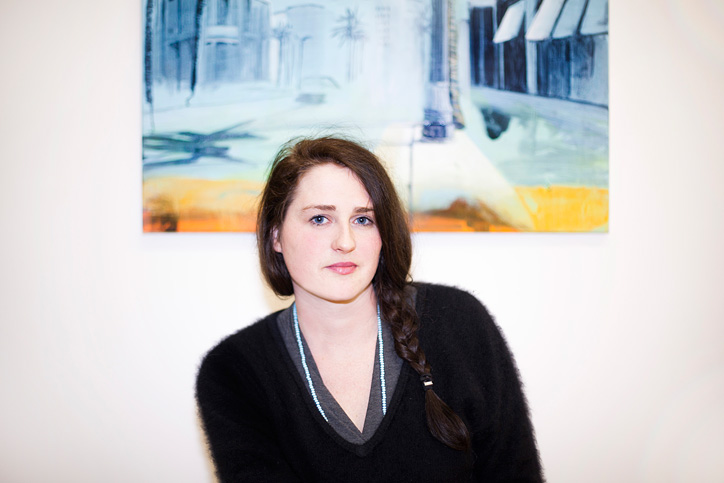 Between dinosaurs, amusement parks, abandoned Victorian hospitals, violent video games and living with nuns, Louise Thomas is one artist who never seems to run out of interesting subject matter. Originally from London, Louise now lives and works in Berlin where for her most recent solo exhibition, "GTA Tru Life", she painted screen shots taken from popular video game "Grand Theft Auto" while exploring the notorious virtual playground on a bicycle- perhaps it was her cycling accident in Berlin, in which she broke both of her arms that goaded her to paint from a more appealing virtual bike. In some pieces she fuses real landscapes dear to her heart with unreal but no less beautiful scenes from the imaginative spaces of the game. We met Louise at her gallery whereupon receiving us, like a good stereotypical Brit, tea and cake were promptly offered.

What influenced your decision to move to Berlin?

I came for two weeks in the summer of 2011 and it really was an incredible time. I met so many great people; I believe Berlin is the creative capital of Europe. It’s not so good for selling paintings, that side of it is still London, but the ideas that flow, the people you meet - it’s exciting! I immediately moved into a flat with musicians and crazy collectives and parties, I broke my arms and all the rest of it. In London you get caught up because you have to work so hard to make it work and you don’t really get any free time, but in Berlin you can afford to work and live and socialize; it’s a lot easier. In London, you have to be serious about your art because you can’t afford to wake up at two o’clock and go to the Berghain. In Berlin you can sort of have your cake and eat it if you’ve got the discipline already. You know I come from London so I had the gallery, therefore I felt I could move.

Which events and experiences do you feel have contributed the most to shaping you as an artist?

I’d say firstly studying at Falmouth school of art in England was probably the most important event, and the people I met, the network I got from there is very important to me. Secondly, neither of my parents are artists, they’re socialists and taught us very left wing Billy Bragg beliefs.It's all changed quite a bit this year, I guess because someone close to me has died, my ally, my evil twin who I was very close to, so that’s had a massive effect on me. I found out two days after my solo exhibition began in London, so painting became very different after that, a sort of black cloud period. He was a great man, it’s the same person who was playing the game (for GTA Tru Life). He had a great life. That’s had a massive effect. All throughout May, June, July, August and September, I was making these huge paintings for Artifice of Paradise with a lot of colour celebrating life, but it was difficult. I feel that’s probably going to affect the way I work for a long time. Art school, death and being an artist - I guess you have to like the smell of turpentine, don’t you?

What have your residencies such as Iceland in 2010 provided you with?

In Iceland I was interested in the light and the fact that it’s so far north. Everything changes very quickly, and a lot of the time in my painting I have a nuclear landscape or some sort of bar in the sky of purple or green light that’s coming from another planet or something. In Iceland you actually have all those colours and the rocks so I thought I’d go. It was the light and the colour in intersections, and just spending quite a lot of time painting from nature. It was on the north coast, there’s two or three residencies up and around the island that are worth looking into.
The residency in London was in a Victorian church, painted in an arts and crafts style, called the Florence Trust. That was for a year in the church when I was living in London; it was amazing. I met some very good artists, it was enjoyable, freezing cold, and I was struggling. I was preparing for my first solo show in London. I couldn’t afford to pay my rent anymore so I wrote a letter to the people who lived around the church asking whether I could live with them in exchange for helping round the house. I got called up by a sister, because I’d posted a letter to a convent, and she invited me round for tea, then I moved in. I didn’t have to clean or anything, I just had to meditate and live in one of their cells for four months. There was a curfew, if I was out I was locked out all night and causing trouble, if I was in I was in. I learnt a lot from them. I was living in Stamford Hill just before, and it was so dangerous, noisy - hell. All I wanted to do was paint and sleep, so I lived with the nuns.

"GTA Tru Life" comprises of landscapes paintings, considering that "GTA" is a rather urban jungle did you have a criteria for choosing locations, and what were you looking for in the screen shots before deciding which ones to paint?

Because it’s a man-made urban landscape, and because it’s made artificially, I was looking for this most natural part of the game that I could find to use for painting. I thought it would be the most interesting where the pixels are dissolving into a mountain or a sky or a cloud, and then that could be the point of transition into a painting. My boyfriend at the time was playing it all the time and I thought there looked like some really nice landscapes within the game. So he got me a bicycle and a camera and I started cycling around. I just find it really exciting to be able to go around a virtual world and take photographs.

I think it is art but I don’t think that’s the real question- the real question is whether it belongs in the art market and it doesn’t at the moment. But yes, I think it is art, people are crafting these spaces and it’s incredible. It’s opening up a whole new area of painting. I feel I’m paying tribute to the craft but also broadening the horizon of looking closely at it. I’m not a huge player, I’m not obsessed, but I’m fascinated by it.

The words ‘Jurassic’ and ‘techno-nostalgic’ seem to be thematic in your last two solo exhibitions, would you mind explaining this notion for us?

A very important book for me is called The future of nostalgia by a Russian American called Svetlana Boym. She’s written about Jurassic Park in the sense that longing or nostalgia for something that isn’t inside of our human memory is a techno-nostalgia or Jurassic nostalgia. It’s using science and technology to reconstruct something entirely from scratch. It’s an American export, the dinosaurs, these theme parks of dinosaurs; they’re all over the world. That’s a fascination of mine, something where we completely reconstruct. If you’re going to make paintings you have to really know what you’re making paintings about, not only how to technically make a painting - the context has to have the foundations and be strong.

For your "Artifice of paradise" solo exhibition in London this year you had visited lidos, Victorian hospitals and amusement parks, how do you decide what will make for interesting subject matter?

It’s a culmination of life experience and places I’ve been to; experiences I’ve had. It started with resorts and hotels in Las Vegas, this makeshift motel mirage architecture, and then it moved into this amusement park which is, again, a reconstruction of the past. More particularly, it’s these dinosaurs I find more interesting. Their mechanical repetition, you’re constantly on this track going around, the fountain goes off so many times, and you have dinosaurs appearing thousands of times. I’m very much interested in history.

Can you give us some insight into any new ideas you have for future projects at the moment?

I’m thinking a lot about Atlantis. I was in Rome at the weekend and I was reading about these floating palaces that Caligula had built that sunk in a lake in Italy. I’m starting to collect resources on these boats and the fixtures and the parts they’ve recovered, I want to make some paintings based on these floating palaces. It was just a matter of walking into this huge museum and seeing a huge lion head part, just a tiny fragment of this enormous palace, which just looked absolutely insane, like ‘what is it?’ I had no idea and then I read the text, (the lion head) is part of this 70 meter long floating palace and that it exists today is fascinating. I’ll probably use the artefacts to paint the parts representationally, and then there’ll be parts of the landscape too. I do like to make lots of collages and see what happens; not have it fixed. 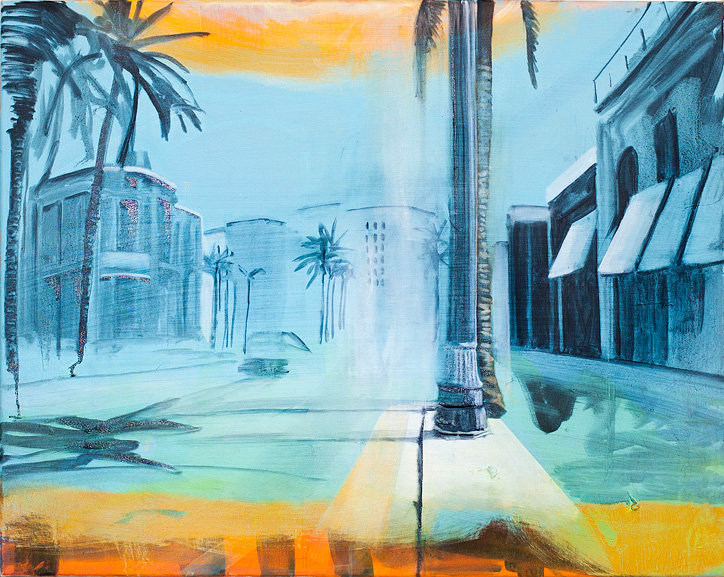 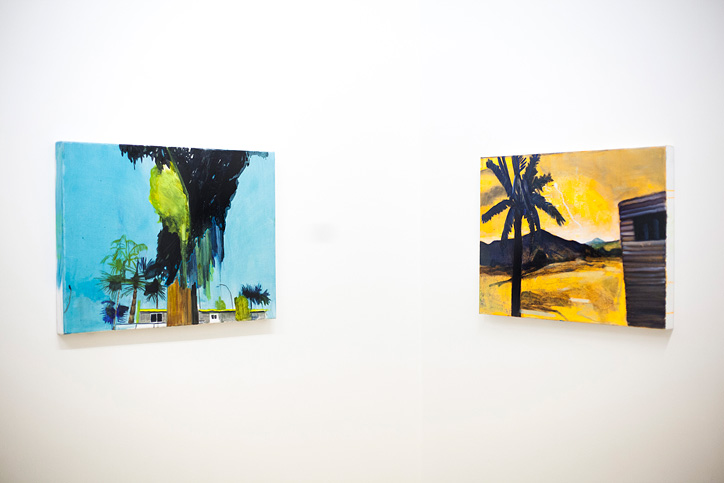 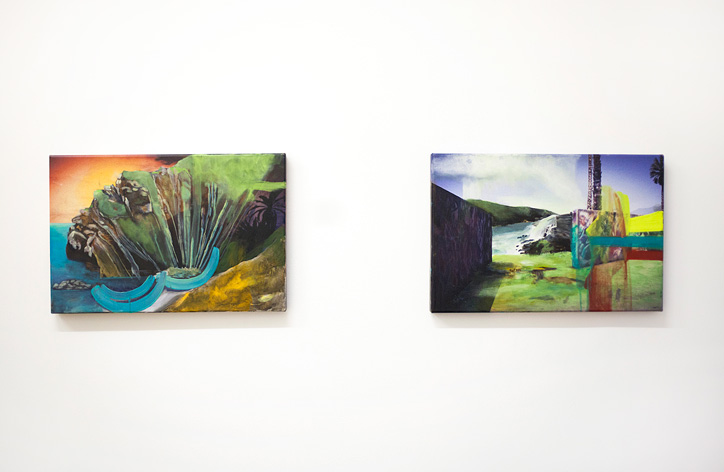 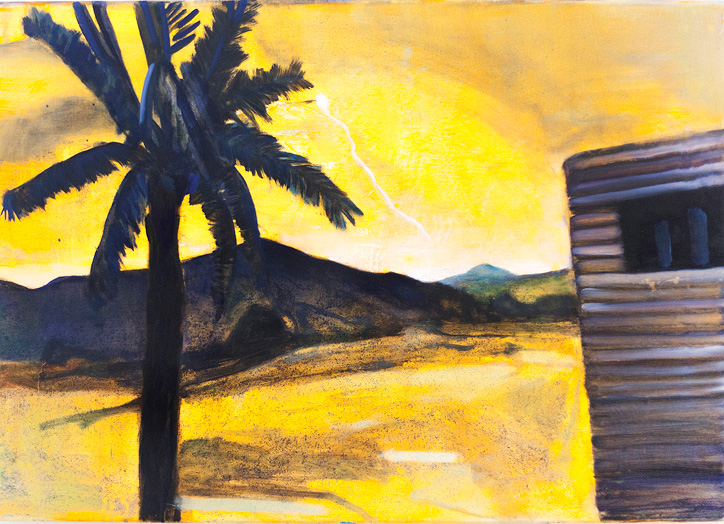 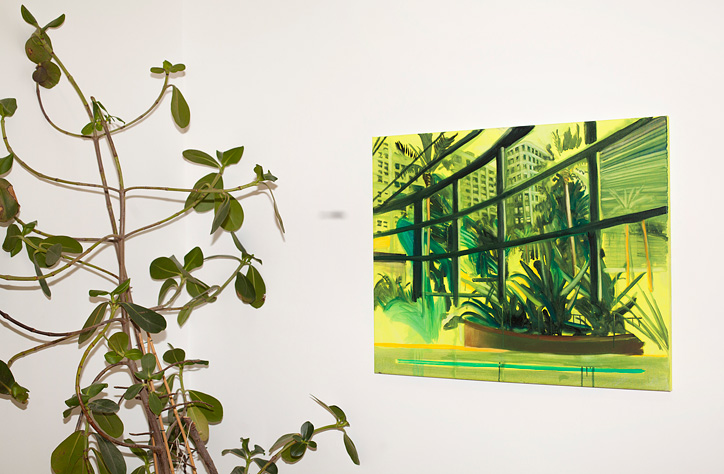 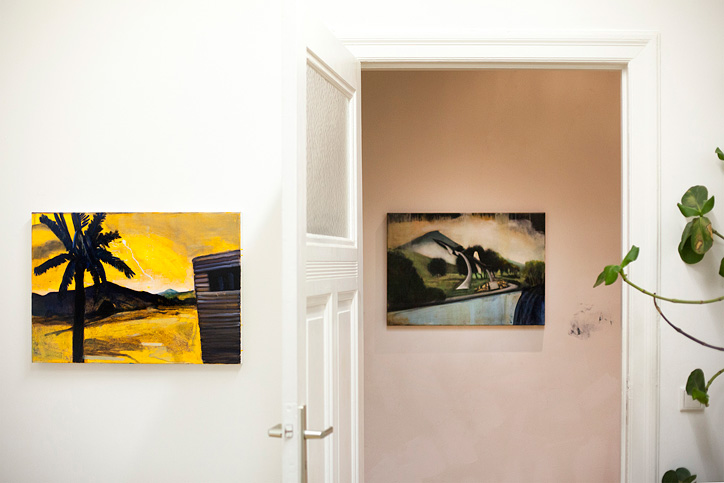 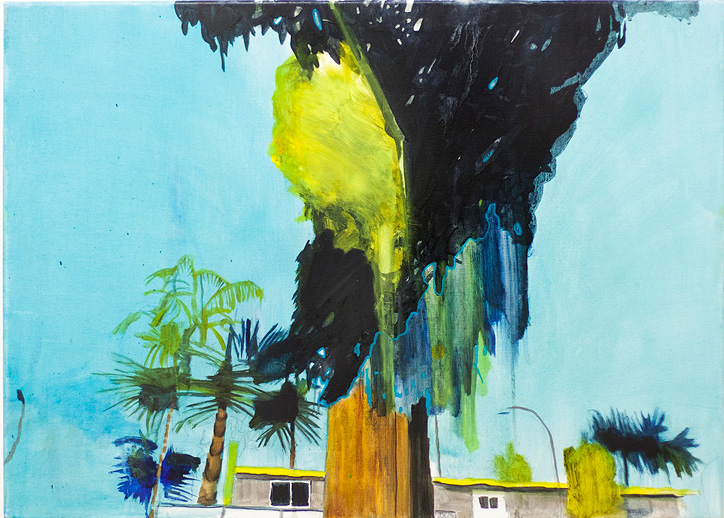 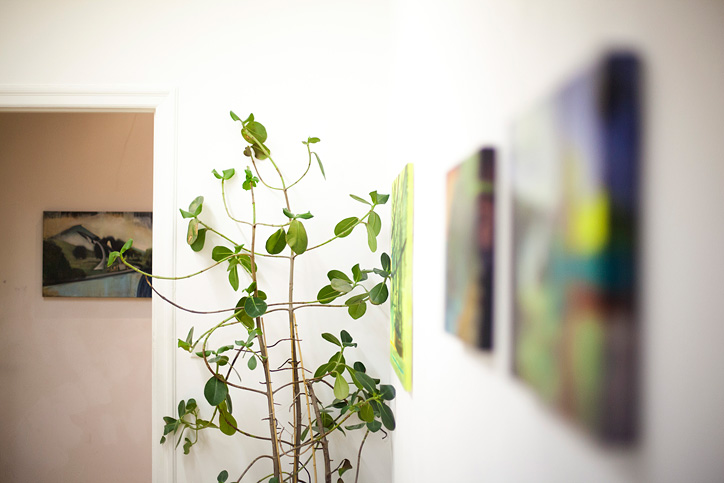 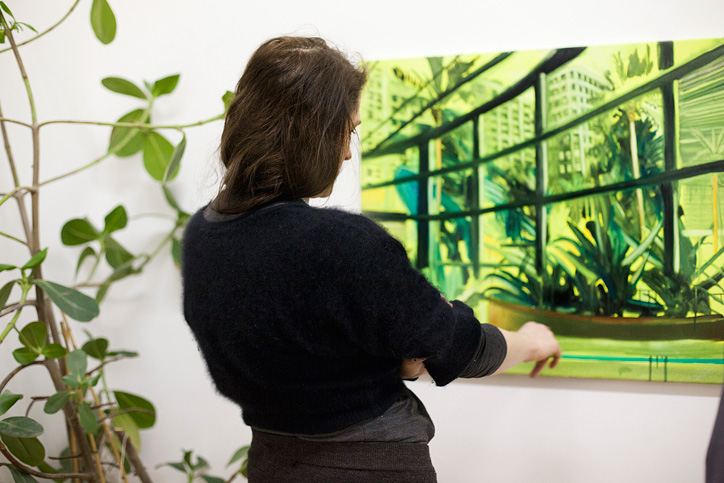