A heart to heartless 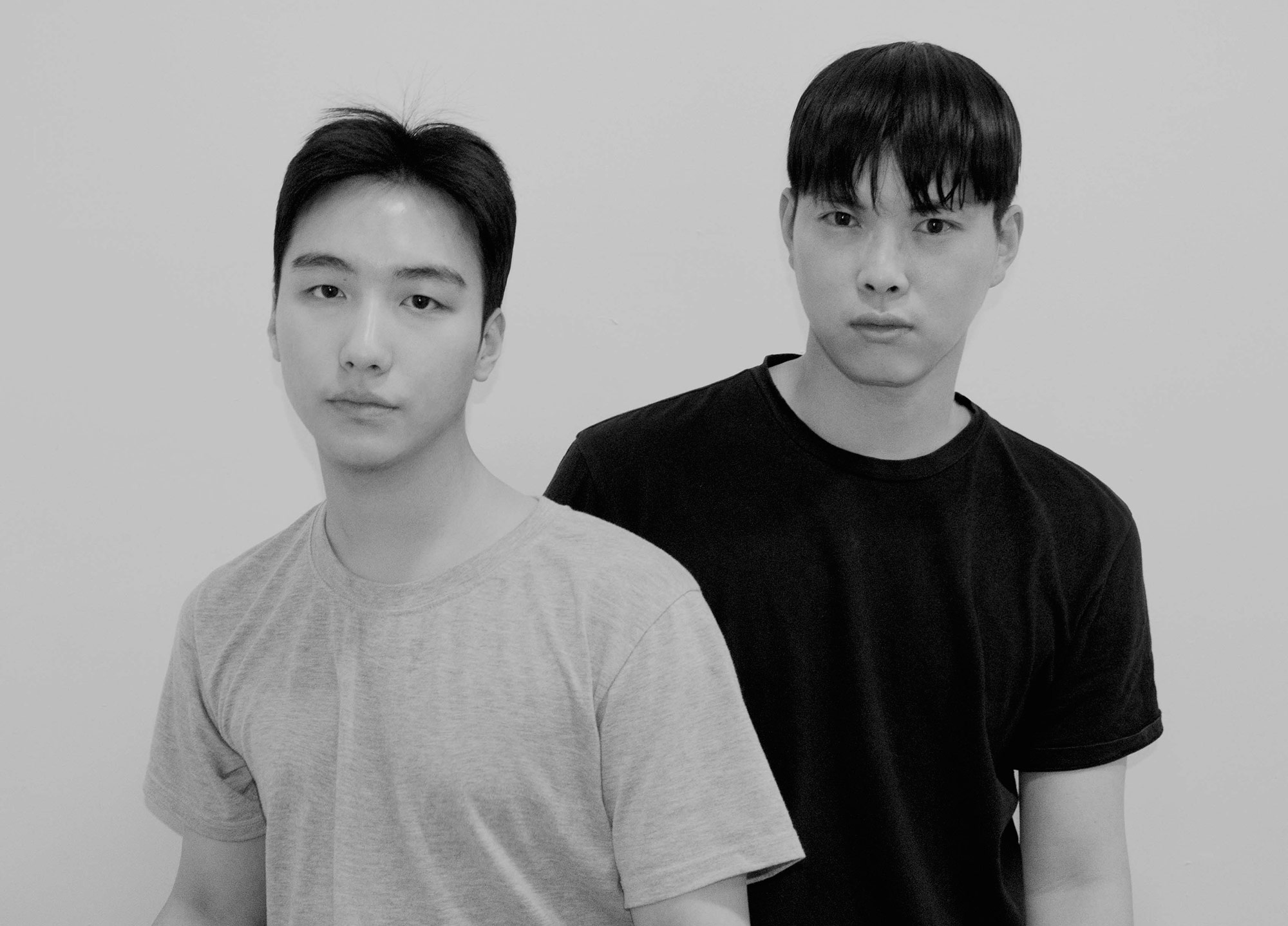 Since graduating from Studio Berçot and Esmod Paris respectively, South Korean designers and stylists Je Yangmo and Kang Juhyeong wanted to create something beautiful, although they say they’ve always craved beauty in their lives. It’s beauty and aesthetics that drive them, but also sustainability and their respect for the environment. In 2017, they found the opportunity to deviate from their lives and start a project together: the brand Leje.
Originally thought as a menswear brand, with their latest collection, inspired by the Wizard of Oz, Yangmo and Kang have taken a first step into womenswear – although they say that they “hoped that our brand should be for the people who like our clothes, not just for a certain gender.” Through their garments, the designers mix French traditional draping with more modern touches and witty details by using beautifully textured fabrics. Leje currently has two workshops: one in Paris and the other in Seoul. In France, the initial work is done, including design and pattern-making; in Korea, they sew and produce, to later be distributed around the globe. 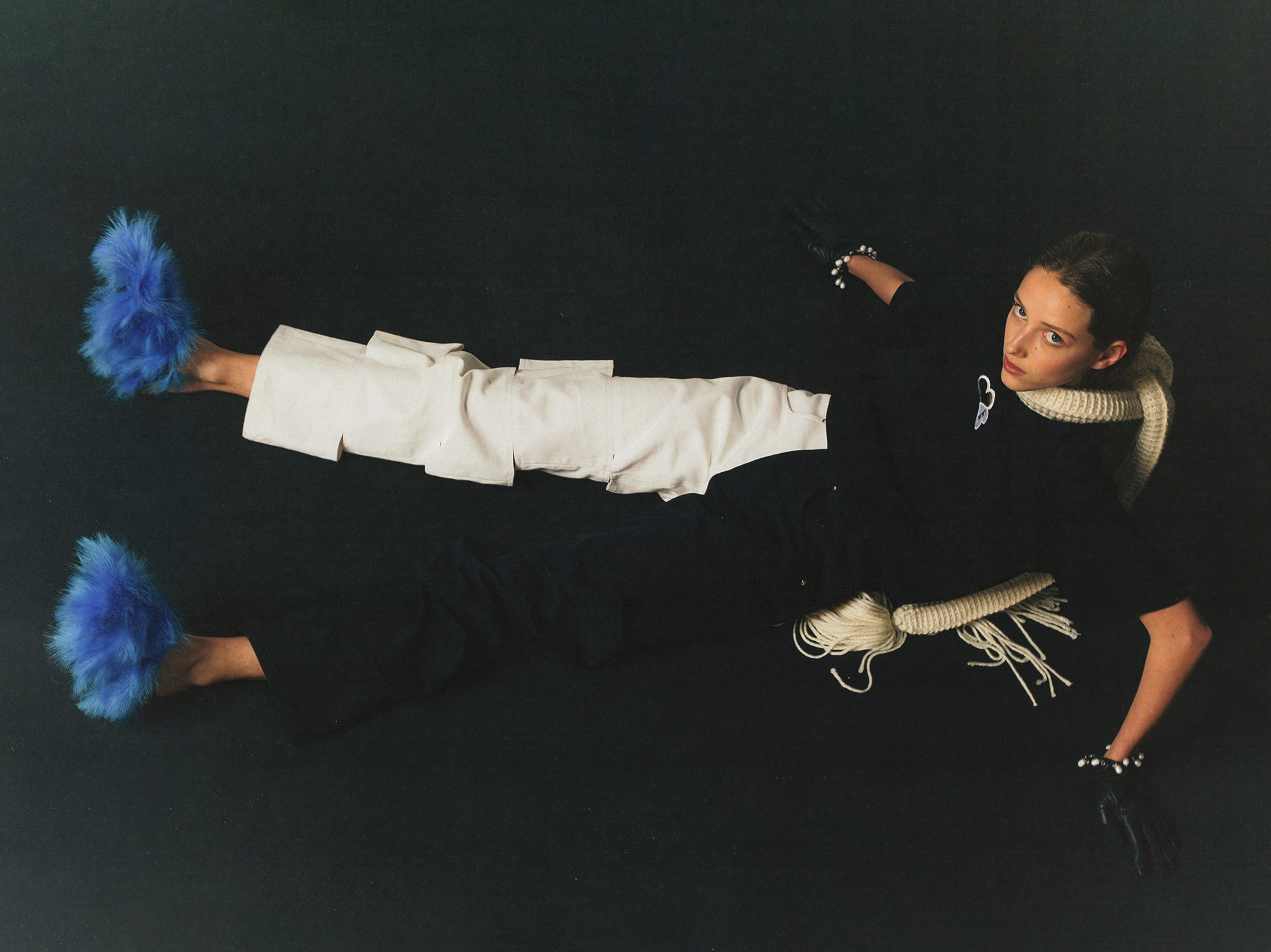 You were born in South Korea and studied in Paris. How does this cultural mix materialize in your designs?
We are proceeding with the story we want to talk about through a medium of ‘the I’. In this process, the respective culture is naturally melted into the story. It is therefore difficult to define something as ‘French style’ or another thing as ‘Korean style’. That’s because our lives seem to be specific, yet rather abstract.
As you just told us, Leje talks about ‘The I’. What about your own ego?
It is hard to define the concept of ‘The I’ in a word. So we think of life as a journey ahead that constantly seeks out ‘The I’. Leje is an itinerary and a record of this journey.
Why did you decide to study design? How did you get to work together?
We always had a craving for something beautiful. It was like a deviation from our plainly ordinary lives. Sometimes it comforted us, sometimes it left great joy. This craving, which attracted us so much, led us to fashion in the end. The work of each of us was quite different when we first met by chance, but we felt fascinated about what one person couldn’t do alone. We were pursuing the same value although expressed in different ways or versions. That’s the reason we are working together. 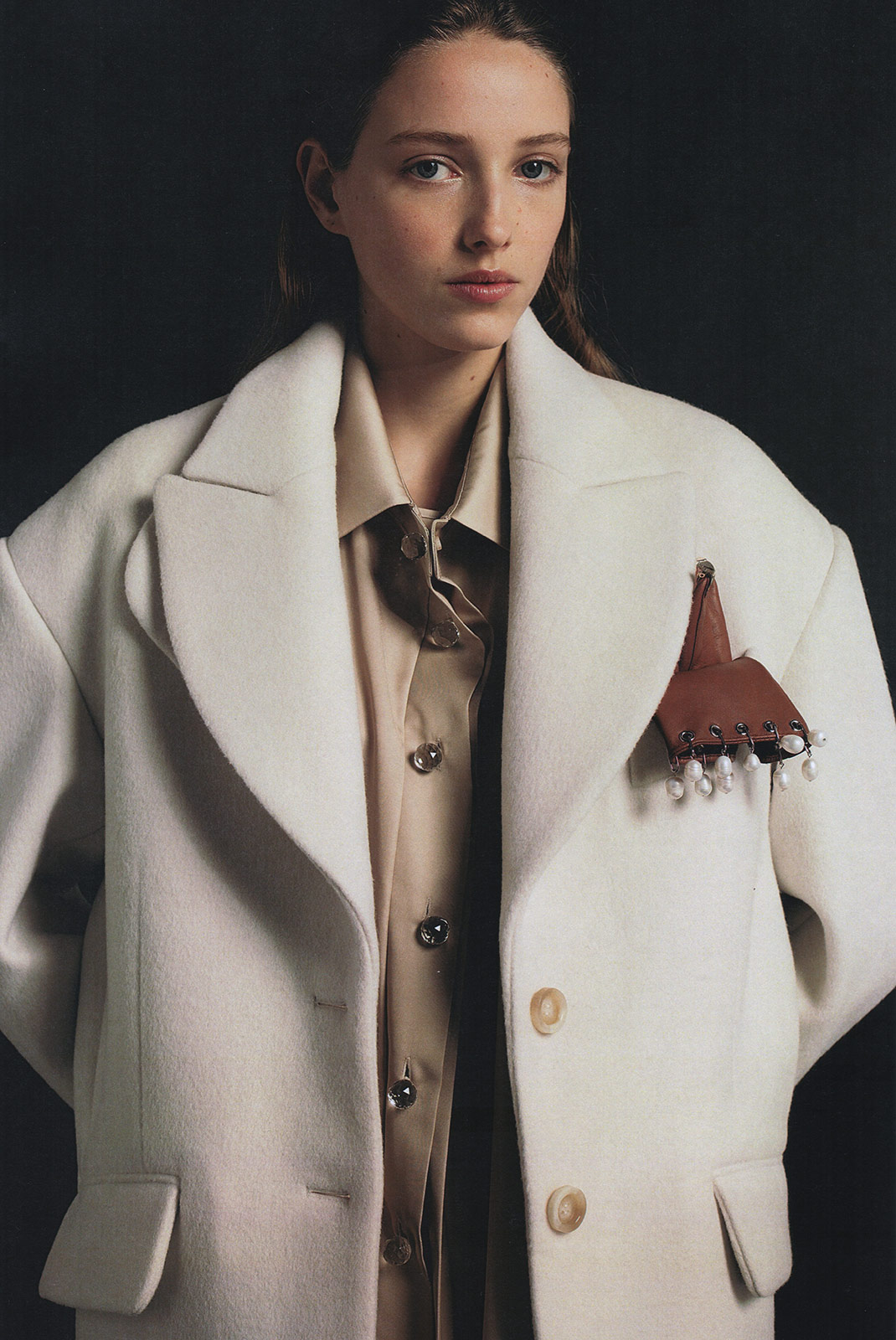 What do you think it is the power that fashion design currently has?
To make something fake look cool.
We are always interested in knowing the creative process of designers. How is yours?
We are two of us as designers. We started working together, being attracted to each other’s differences, which is also the source of our creativity. Even if we see the same thing, we might feel differently. Finding a consensus among these differences can be the most crucial to our creative process.
On your website, you point out that sustainability and technology are fundamental factors for the creation of your pieces. Do you consider these to be your main values? What others do you consider important?
‘Unexaggerated yet bountiful beauty’ is one of the greatest values that we are pursuing. Technological sustainability is an important factor to realize this value. Even though some traditional technologies are gradually weakening these days, we try to preserve them and reflect them into our collections. We think sustainability can be manifested in a number of ways. While being in the pursuit of ethical sustainability through the preservation of disappearing traditional technologies, we can also seek practical sustainability implied by traditional technologies at the same time. 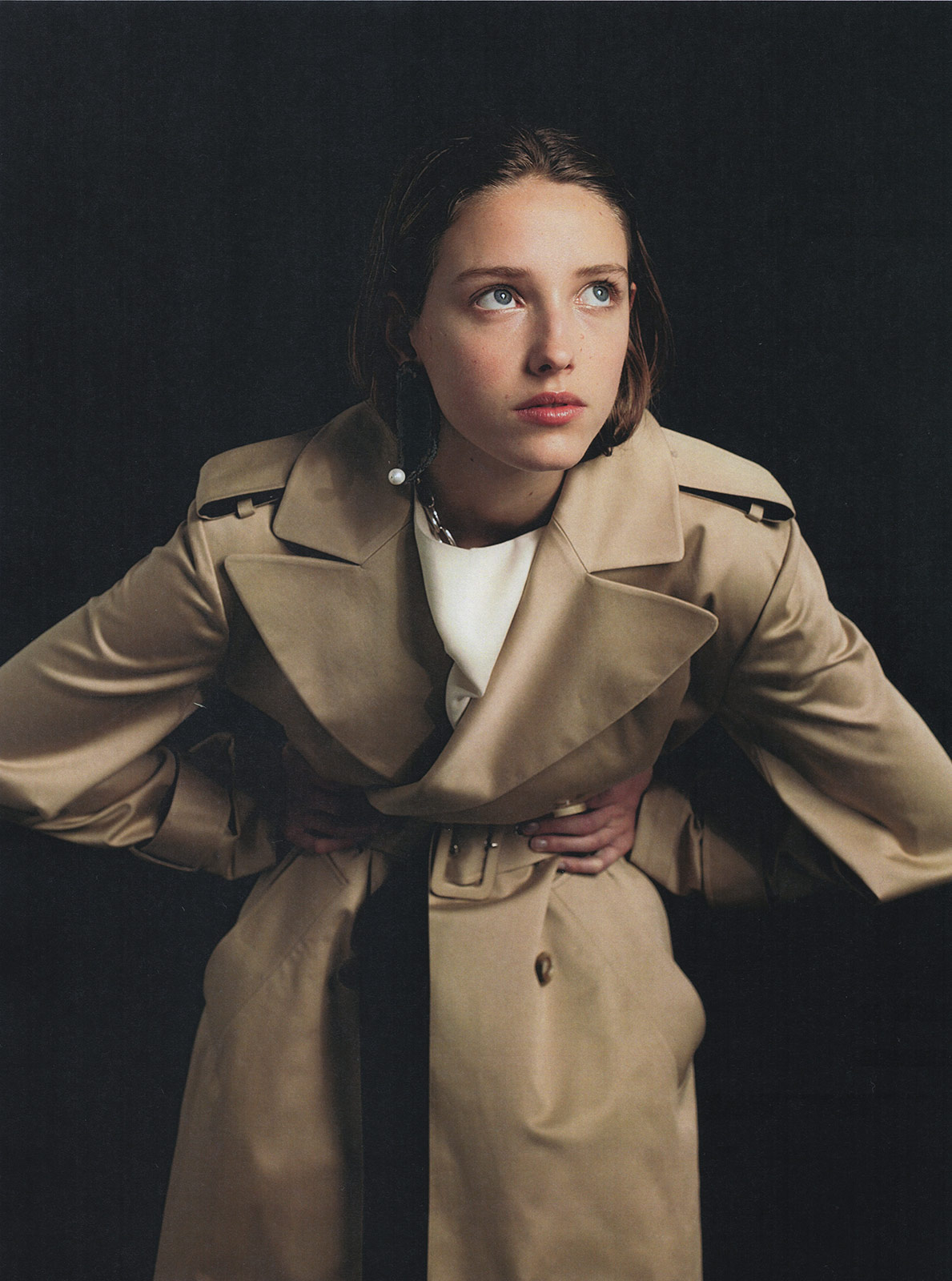 You have pointed out that Leje was born as a brand that combines the traditional French style with elegant materials and details. Do you have a preference in terms of which material are you going to use?
We’re sort of obsessed with elegant materials, so in particular, we try to use fabrics with intrinsic textures. Natural fabrics can meet these requirements. We also consider materials that can add some wit to the concept of each collection, such as rattan stem, buffalo horn, crystal, etc.
Your Fall/Winter 2020 collection, Now I Can Love, is based on the story of the Wizard of Oz, but you decided to take the enemy of the story as the protagonist. What motivated you to give a heart to the Wicked Witch of the West?
Many characters of the Wizard of Oz represent many types of modern people, but the Wicked Witch of the West most resembles modern cynical people who are distrustful and reluctant to love others. It is love that we’d like to offer through this collection.
Until now, you had only made clothes for men, but in Now I Can Love, there is a mixture of super interesting clothes which play between the feminine and the masculine. Why did you decide to make a leap to womenswear? Will this collection mark a change in gender issues for the brand?
As it’s been decades since Yves Saint Laurent introduced the smoking to womenswear and Jean-Paul Gaultier introduced skirts to menswear, it might be a too old-fashioned idea to clearly separate the two (men’s and women’s) as gender discrimination. We also hoped that our brand should be for the people who like our clothes, not just for a certain gender. Nevertheless, we came to launch womenswear feeling that the story told through it would be different from that told through menswear. Acknowledging and understanding the differences is also another way to transcend gender, we think. 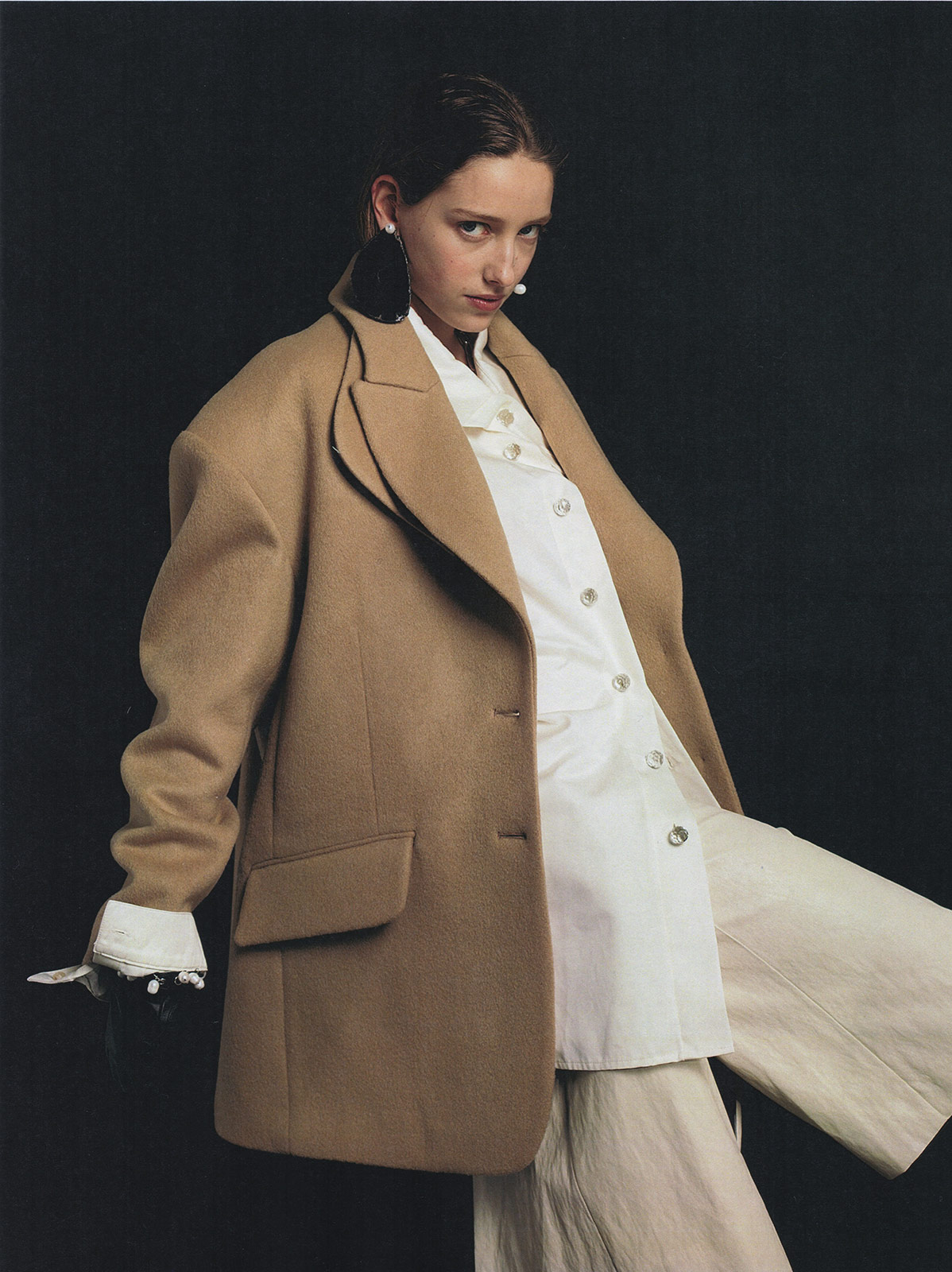 Which females figures inspired you to create this collection?
Pina Bausch in the 1980s.
On a planet that is deteriorating more and more, how do you think new creatives and designers can contribute to the fashion industry?
Many designers have already presented sustainable fashion, which has had a significant influence on everyone. We believe new designers will also talk about sustainable fashion in a new and individual way.
Where do you think the future of the fashion industry points and how do you project yourself?
We think the future of the fashion industry will be a compromise between beauty and reality. As the importance of environmental protection is increasing nowadays, if we continue to ignore it, we will be isolated someday. On the other hand, if we focus on the environment failing to meet aesthetic desire and the demand of the public, we will also be dismissed. That’s why we need to consider finding the right balance. This is also the message of our next collection. 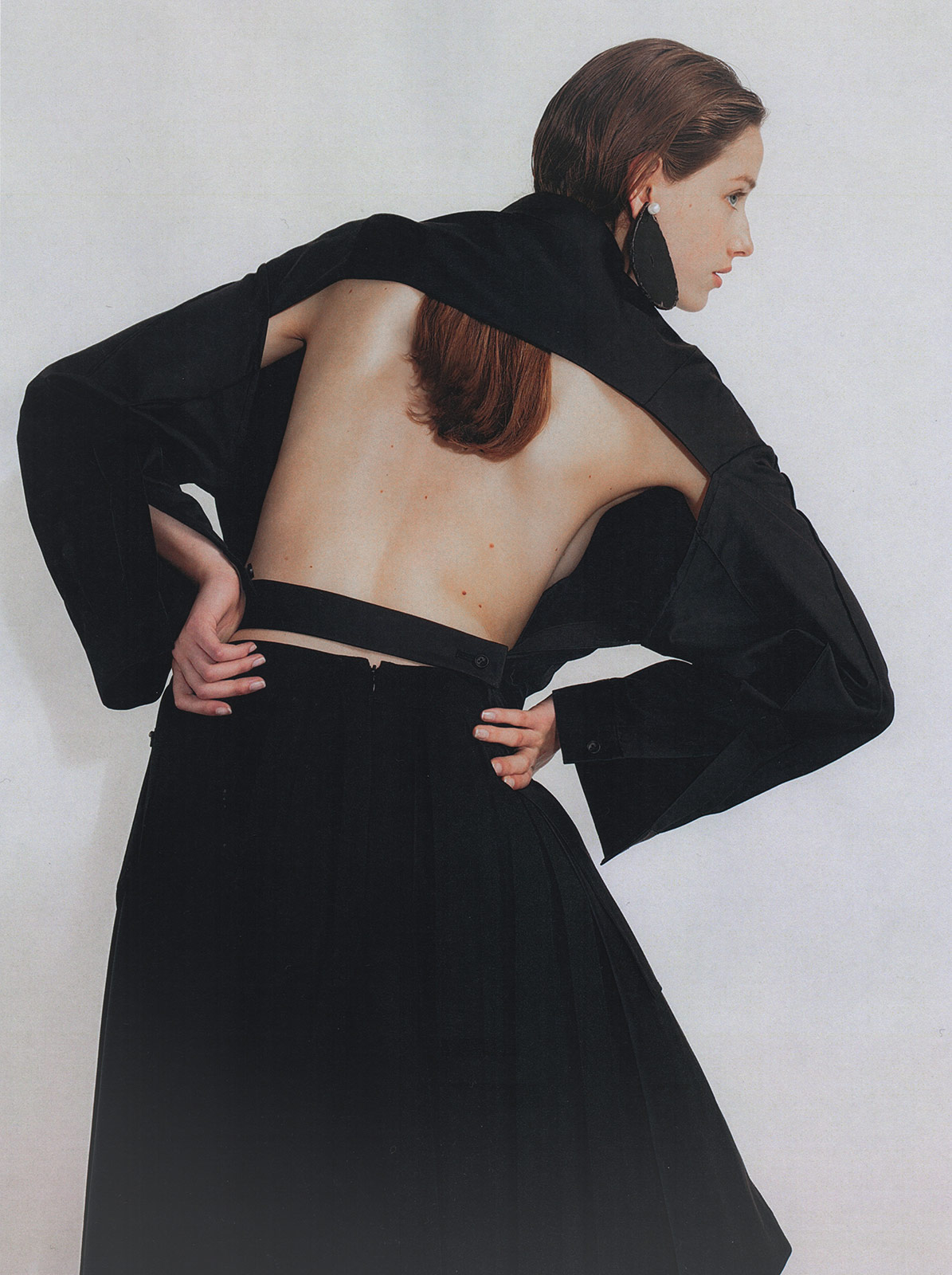 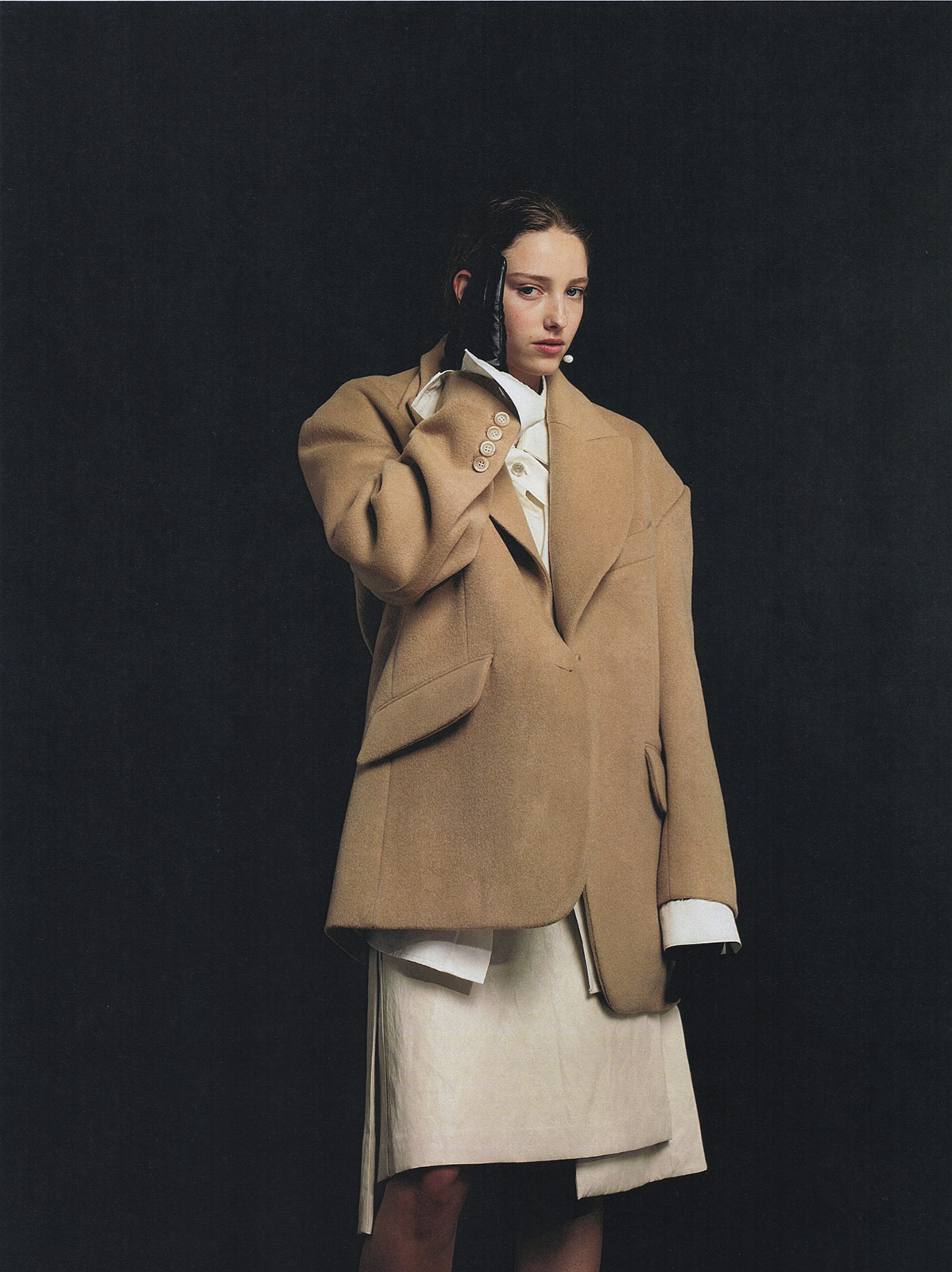 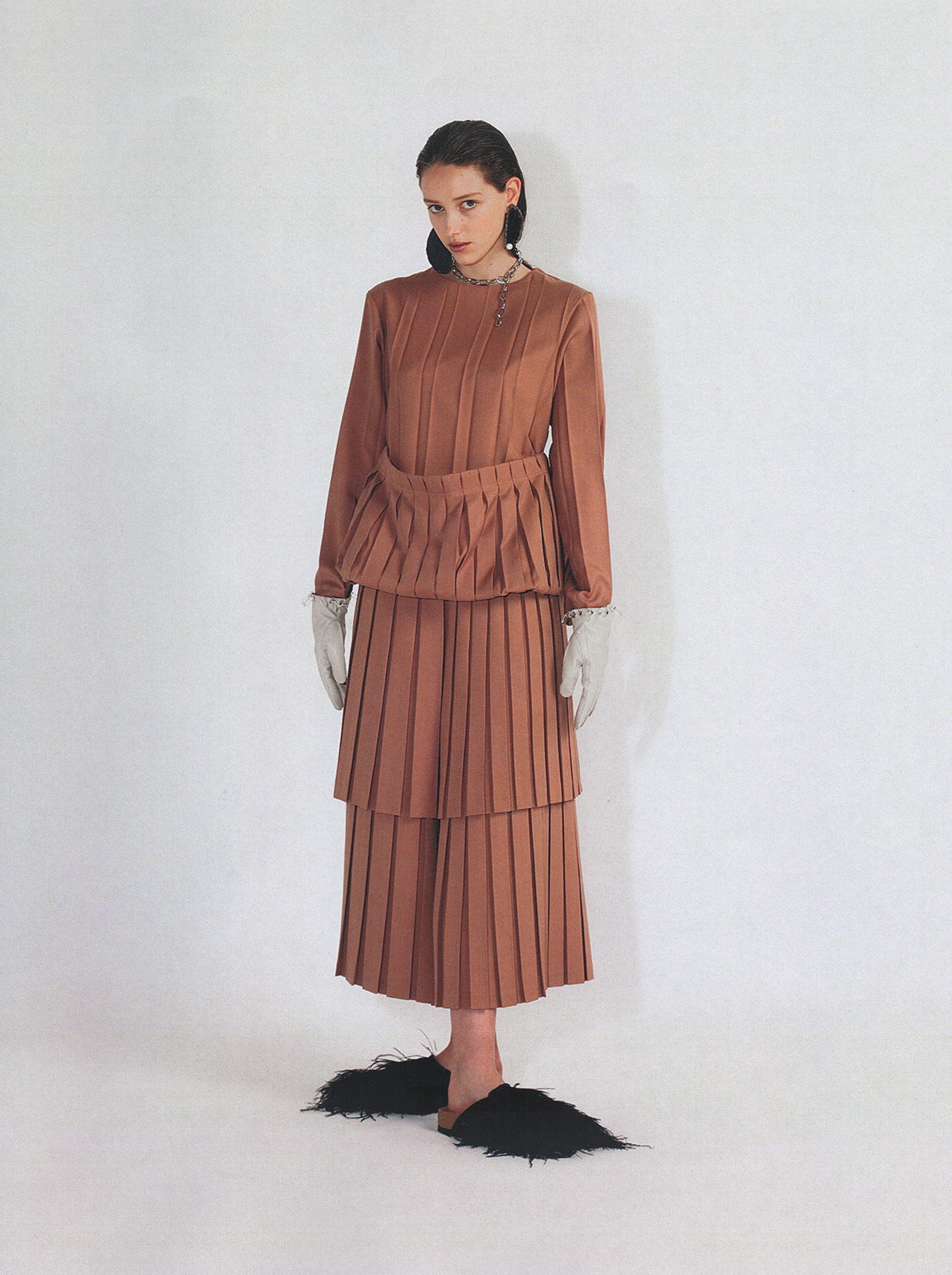 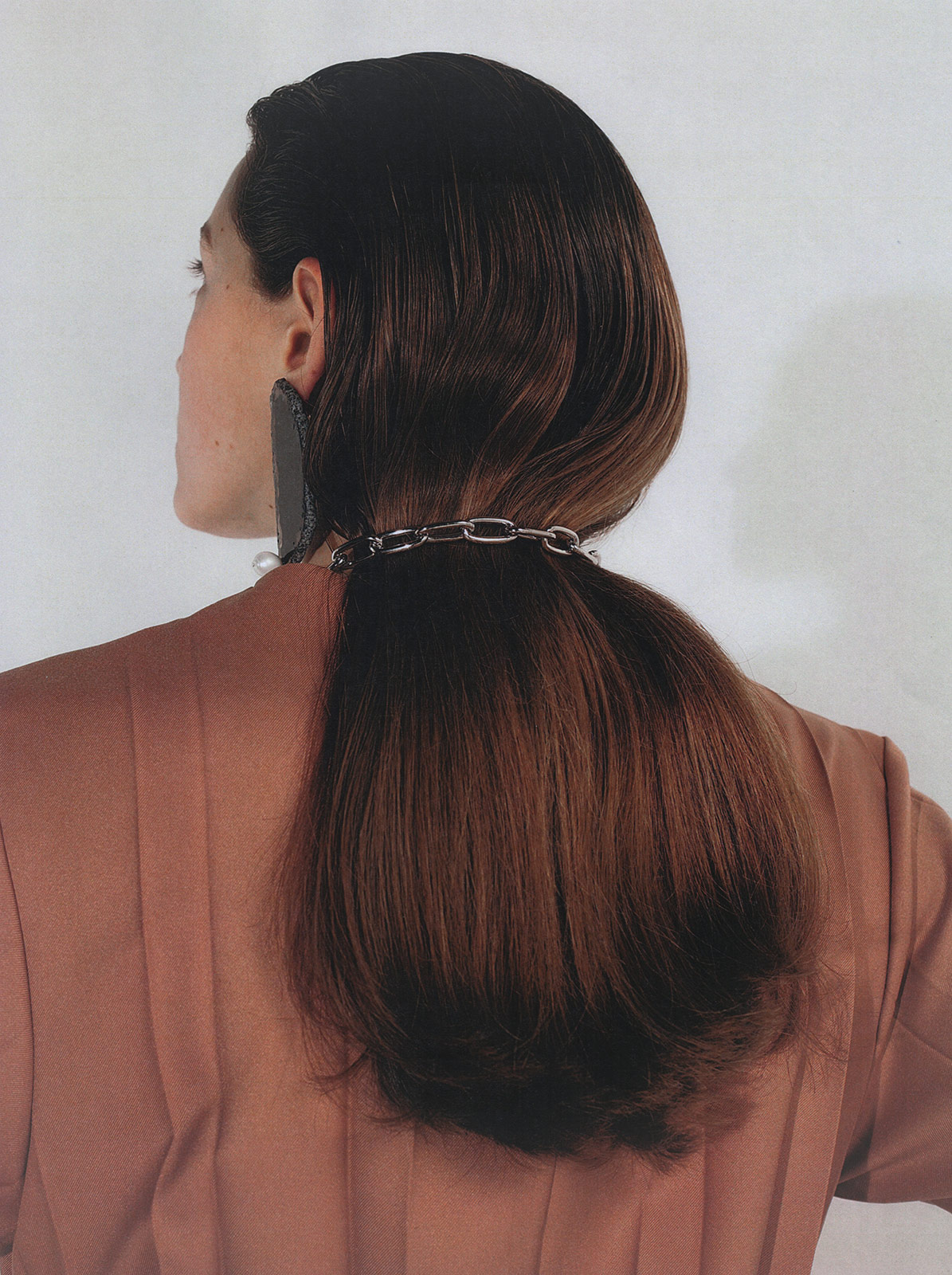 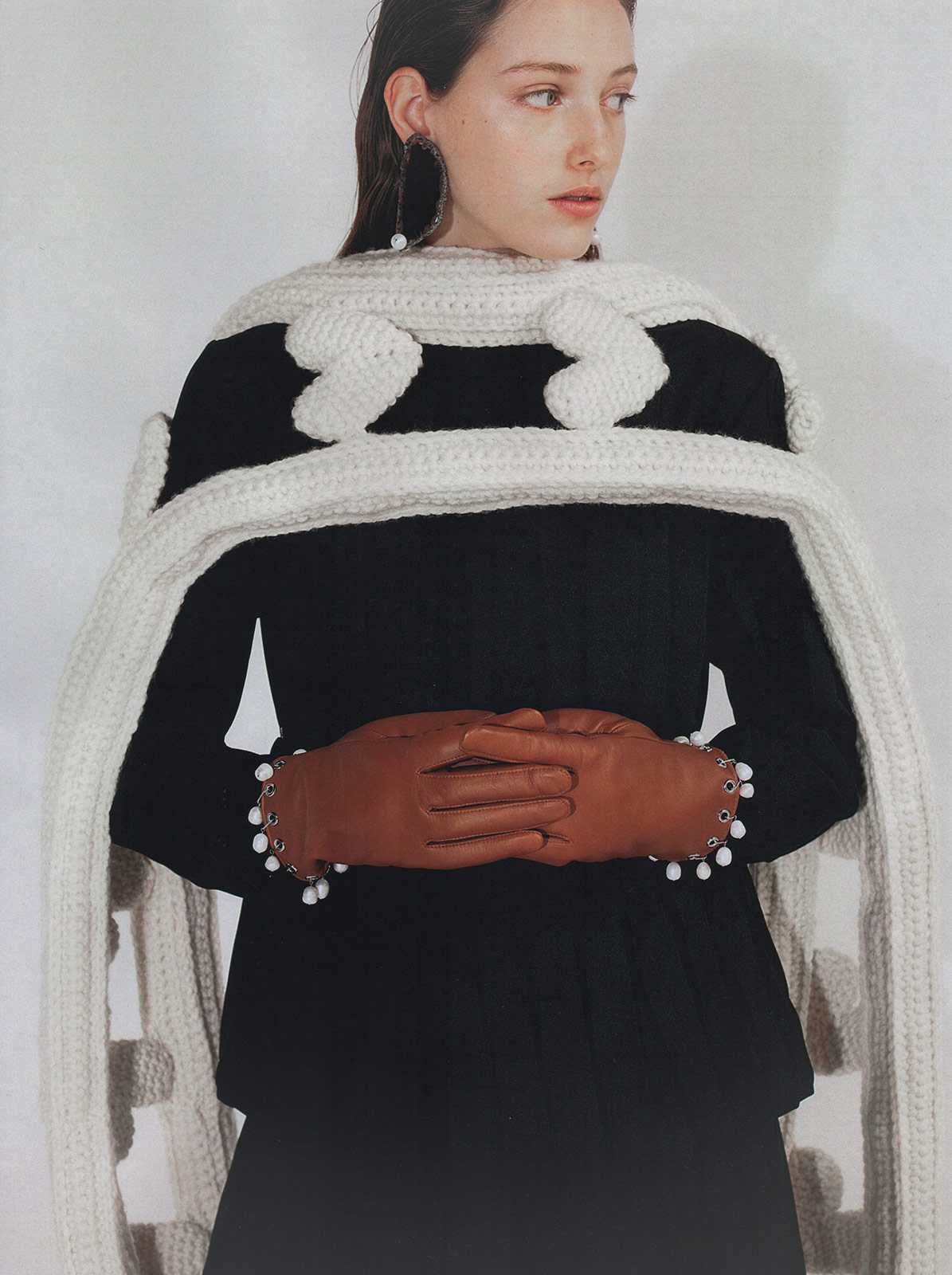 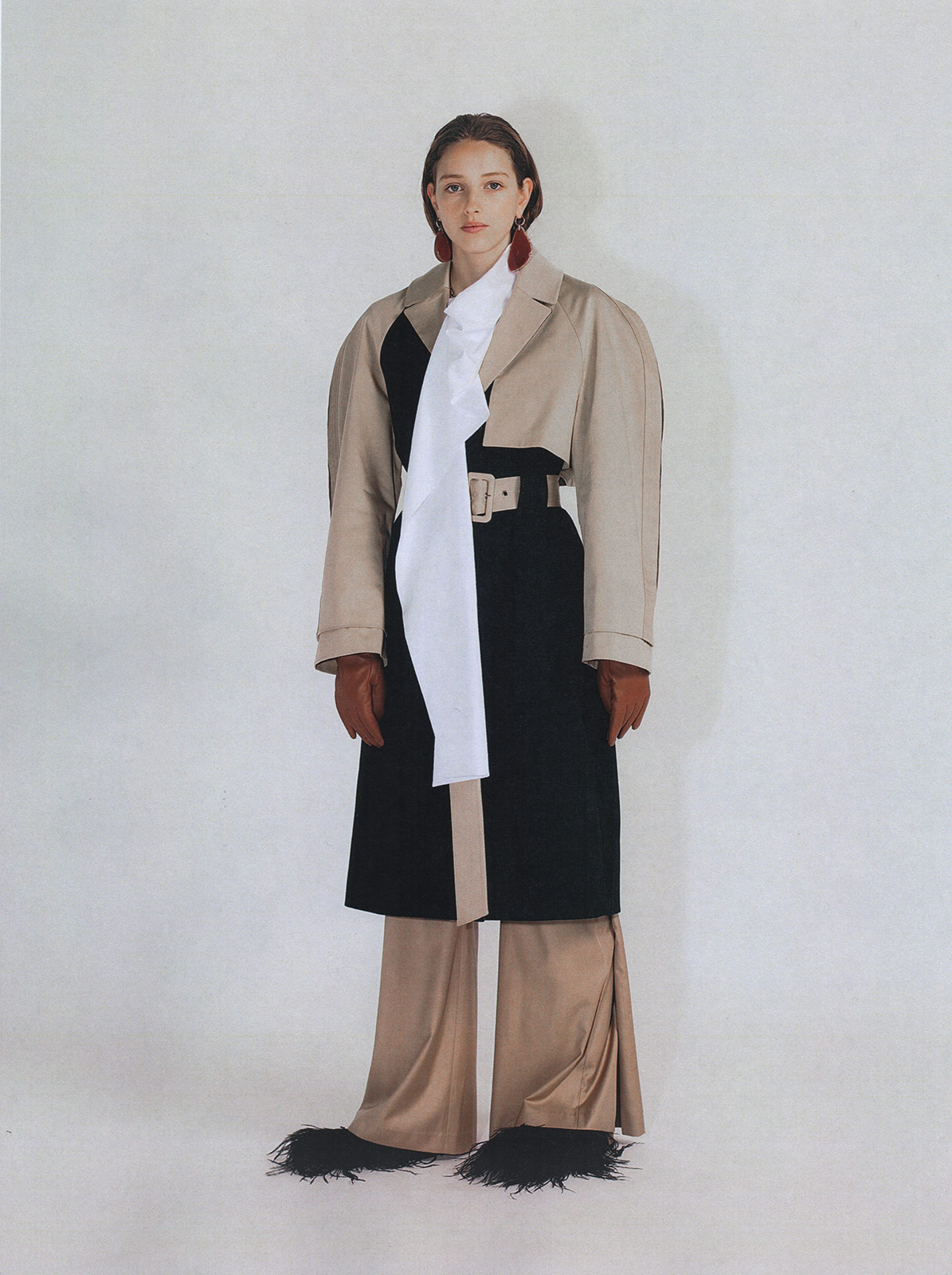 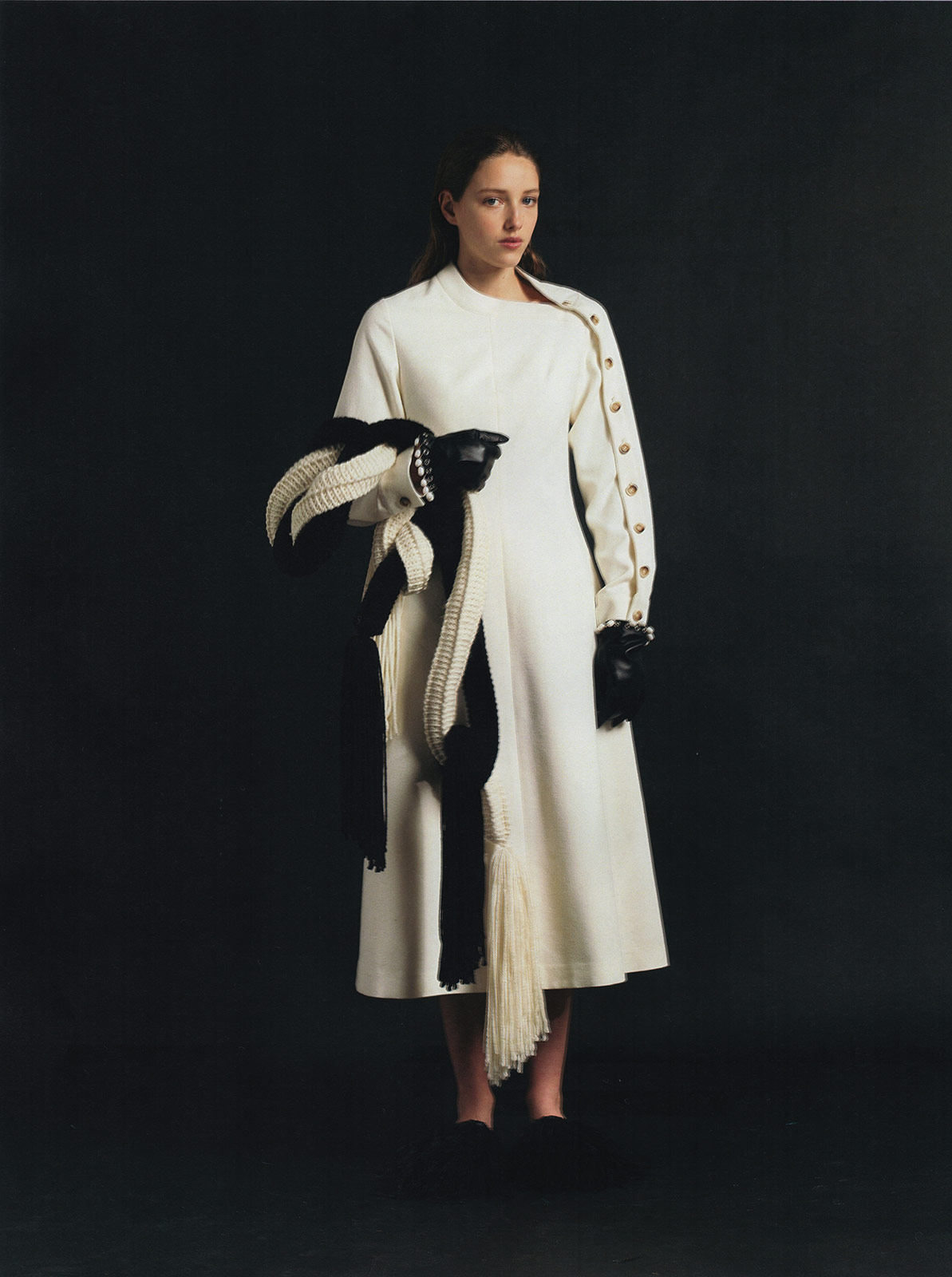 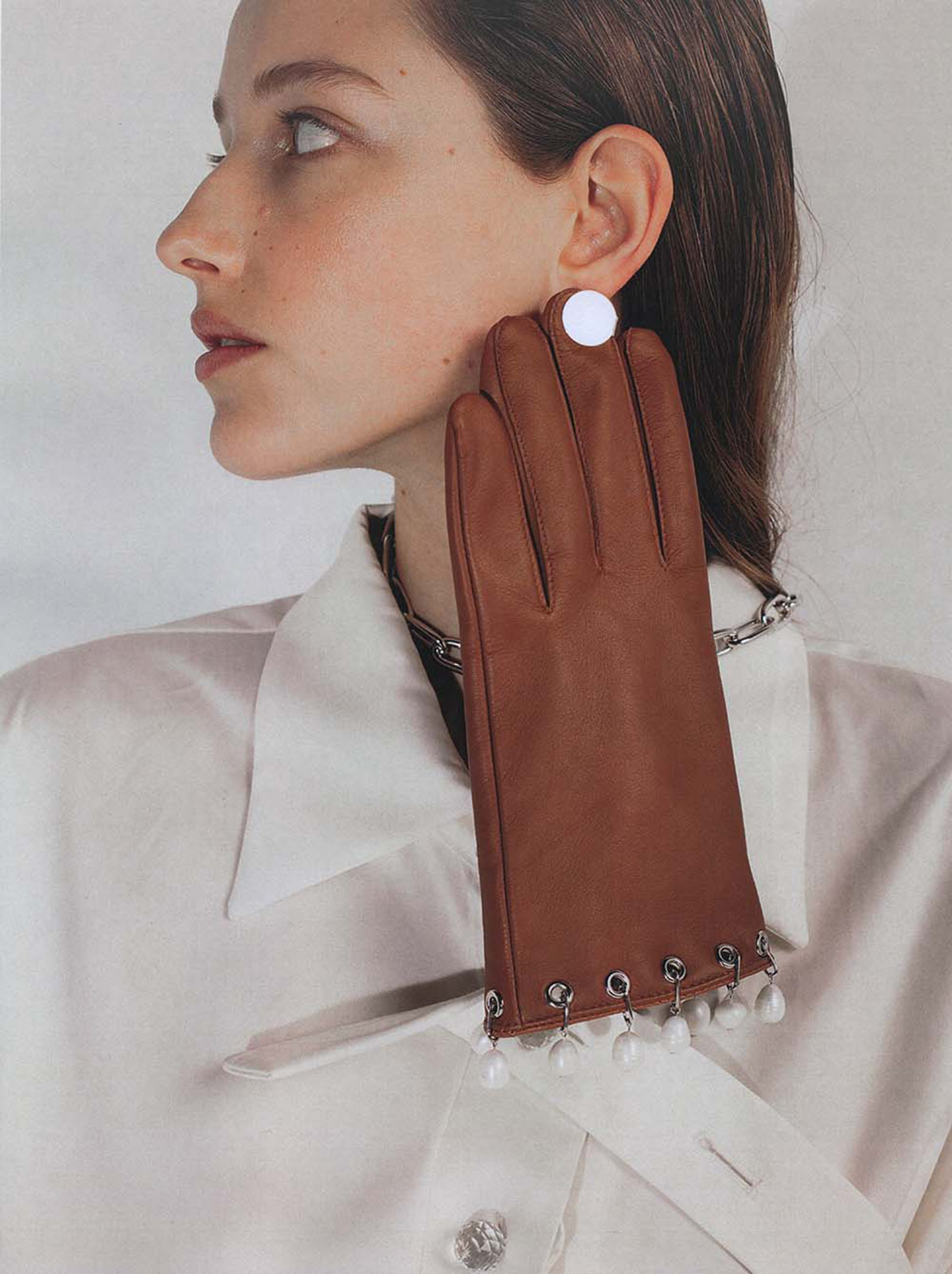 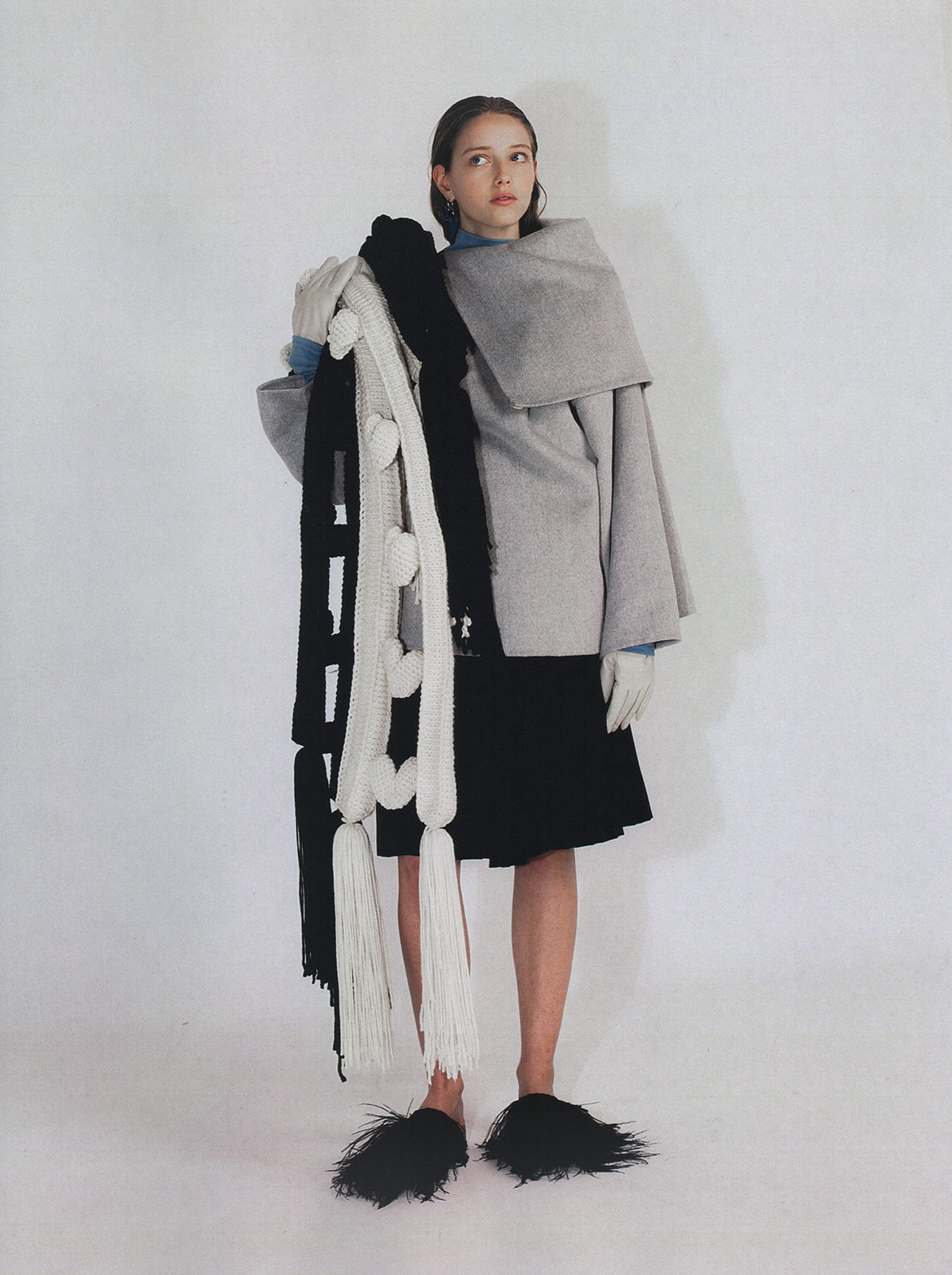 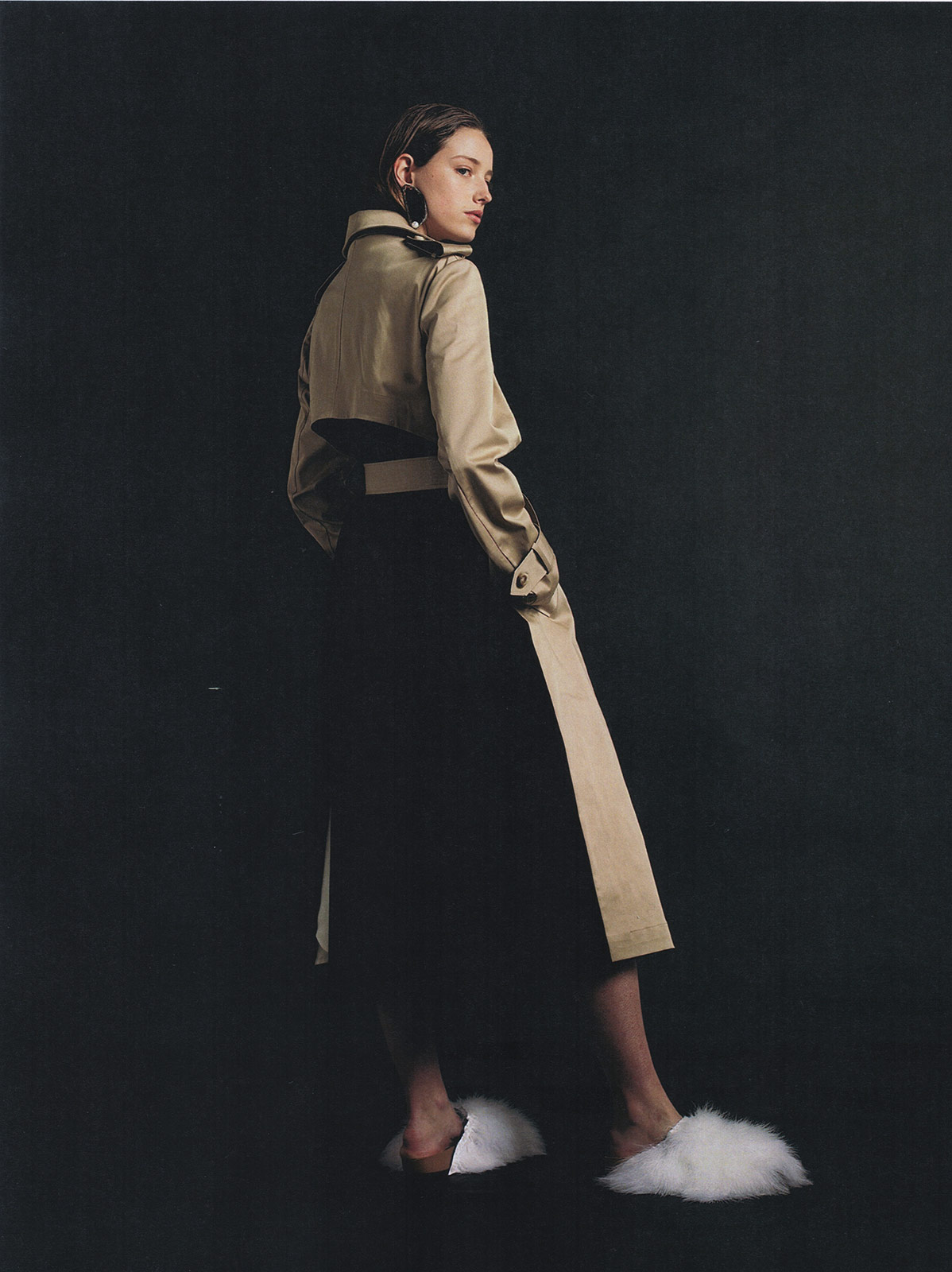 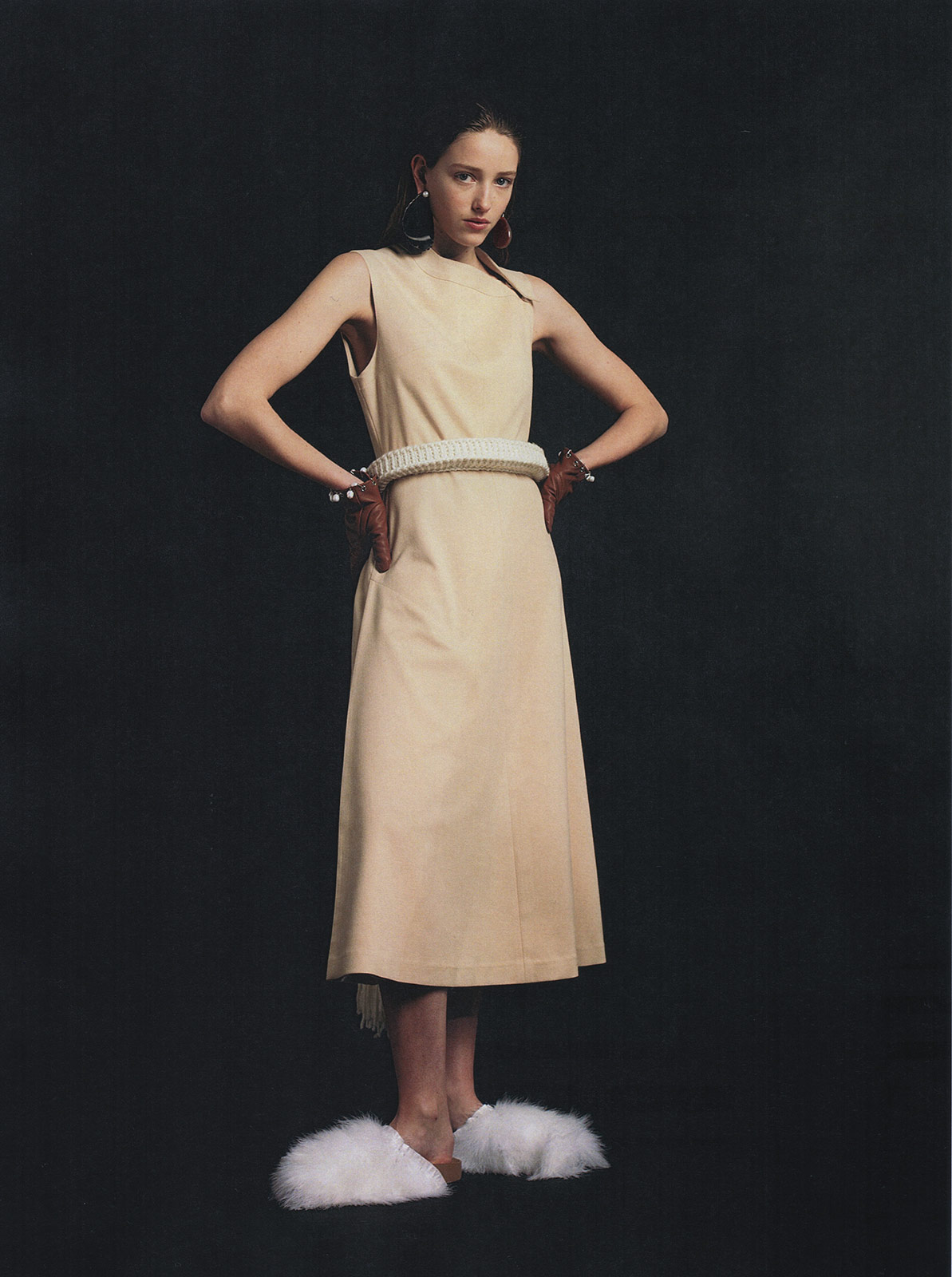 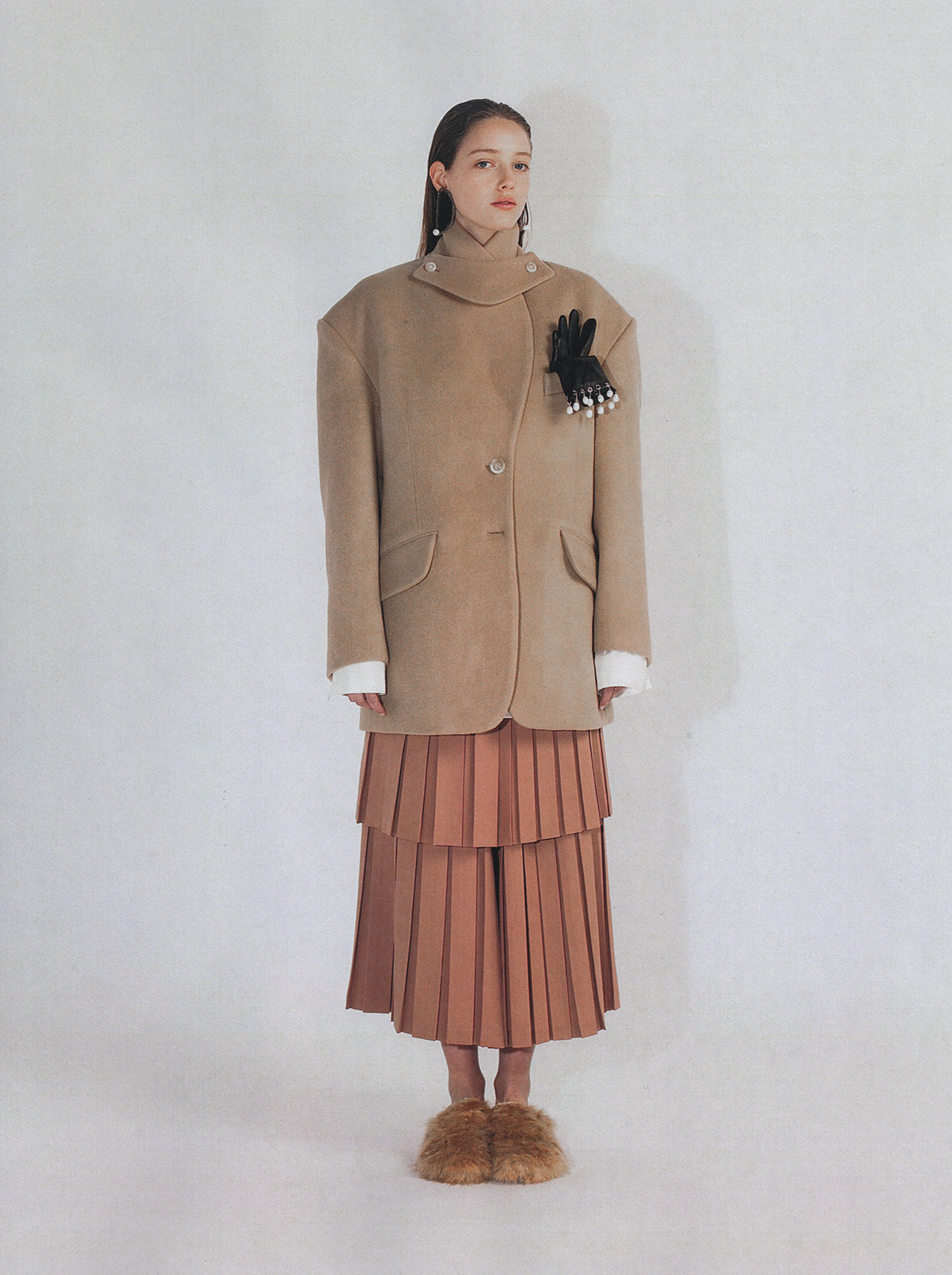 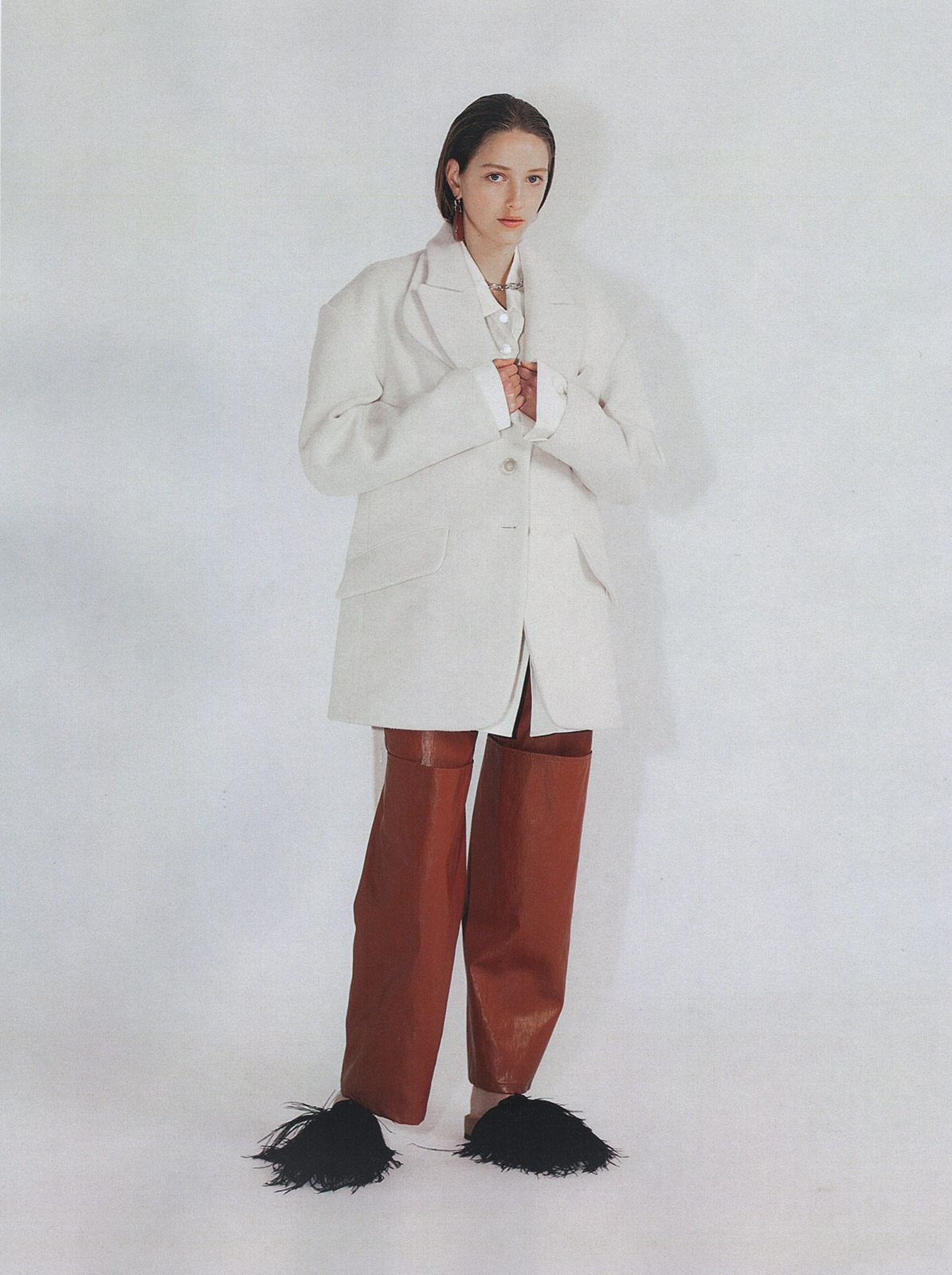 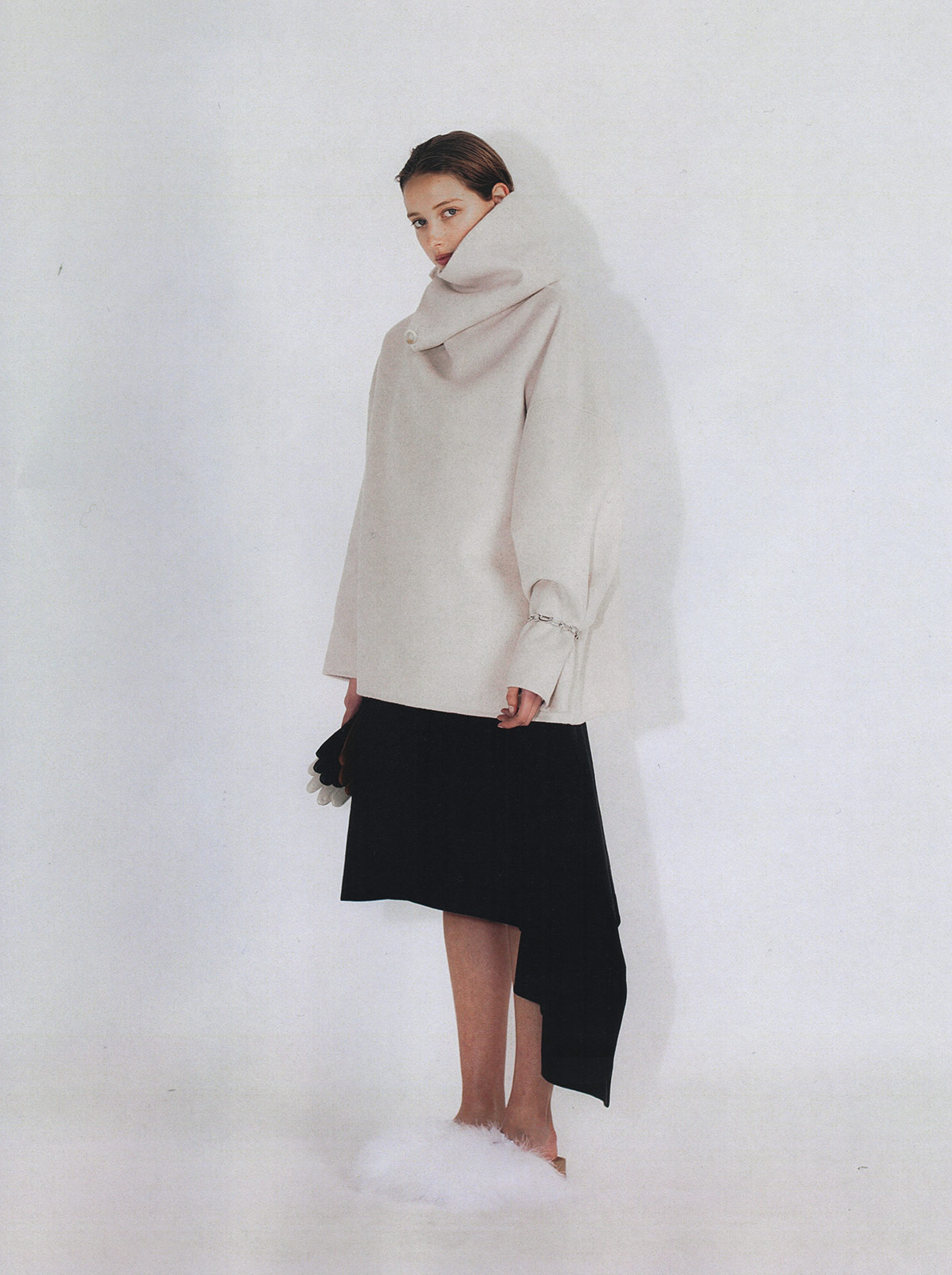 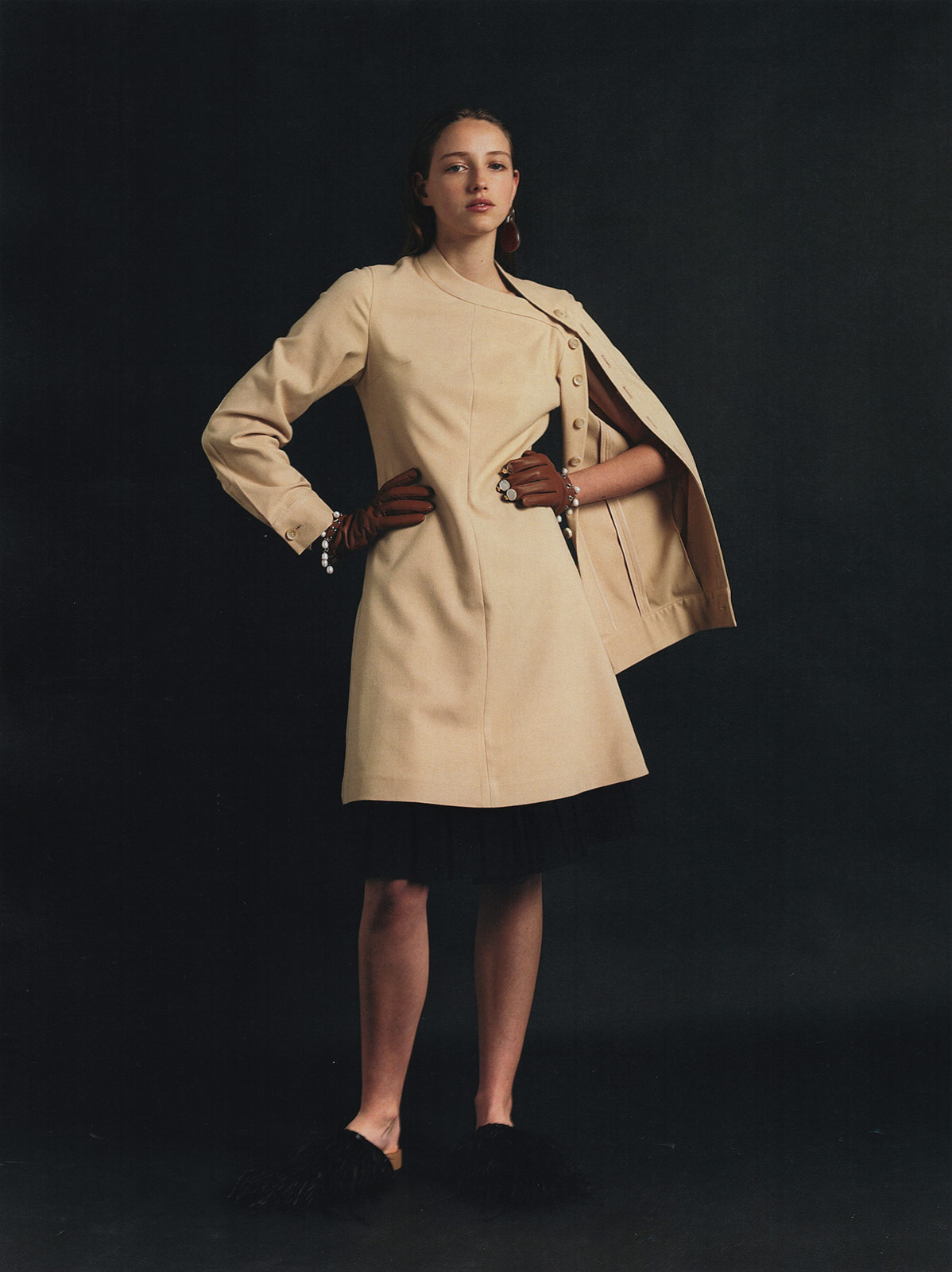 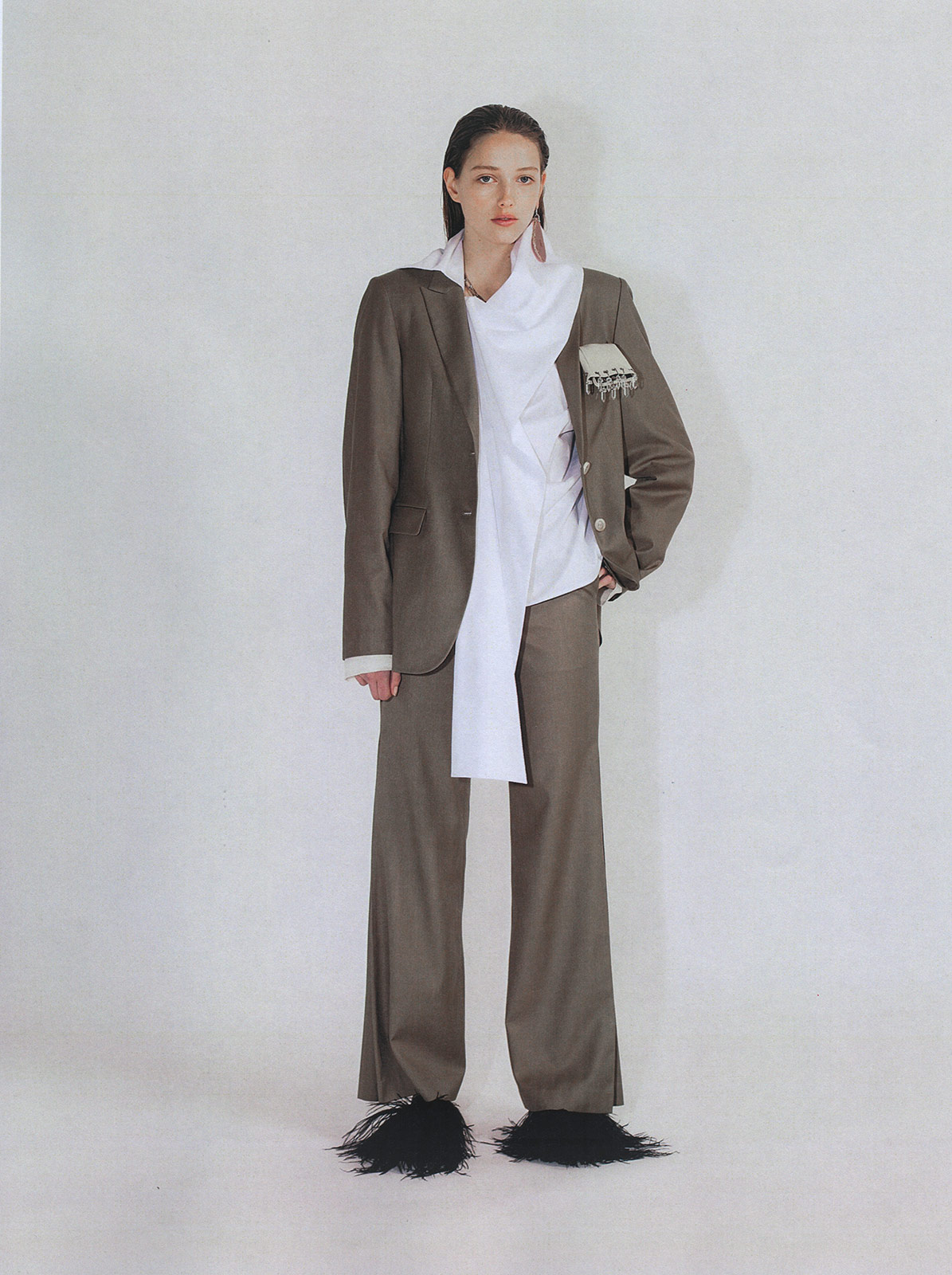 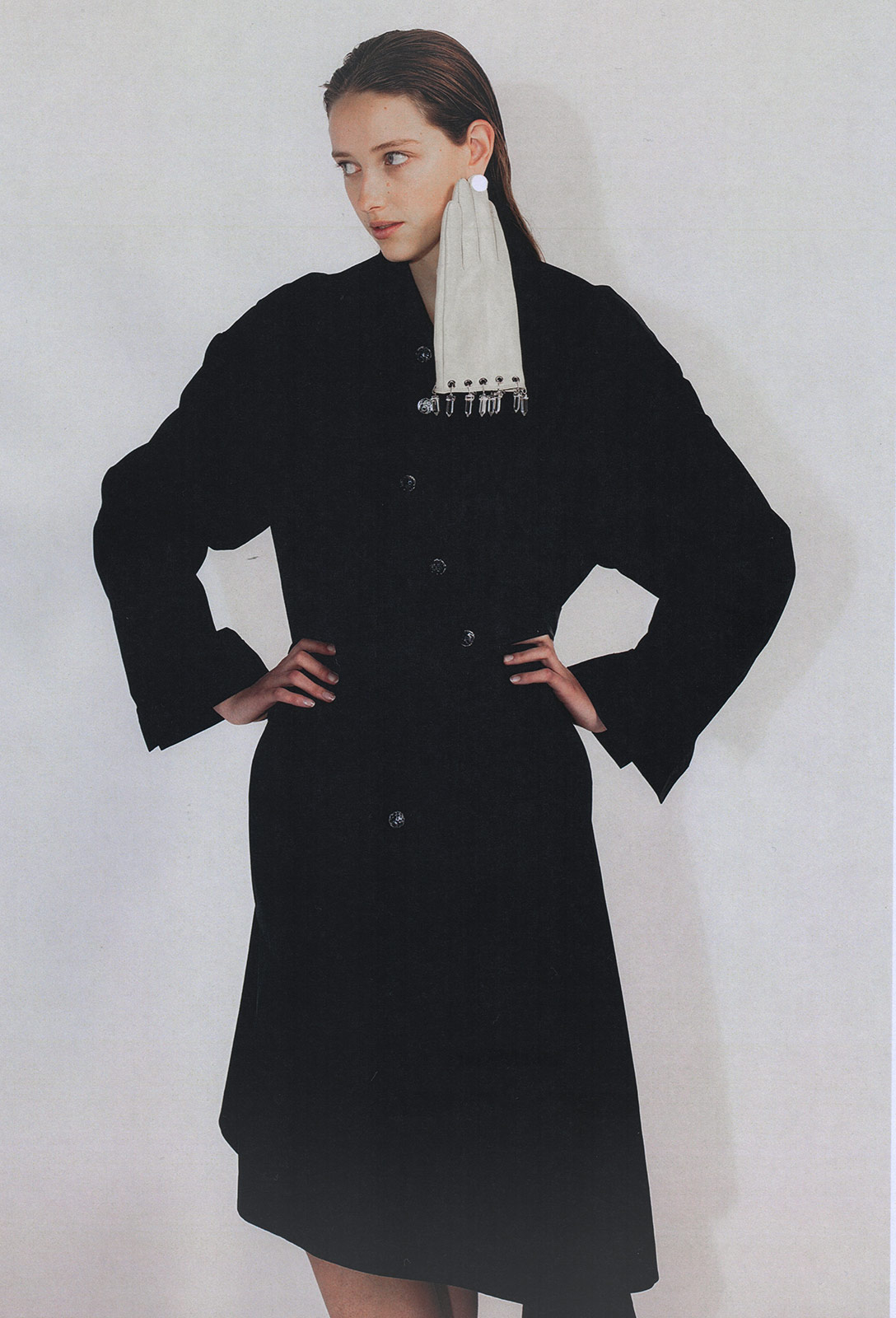 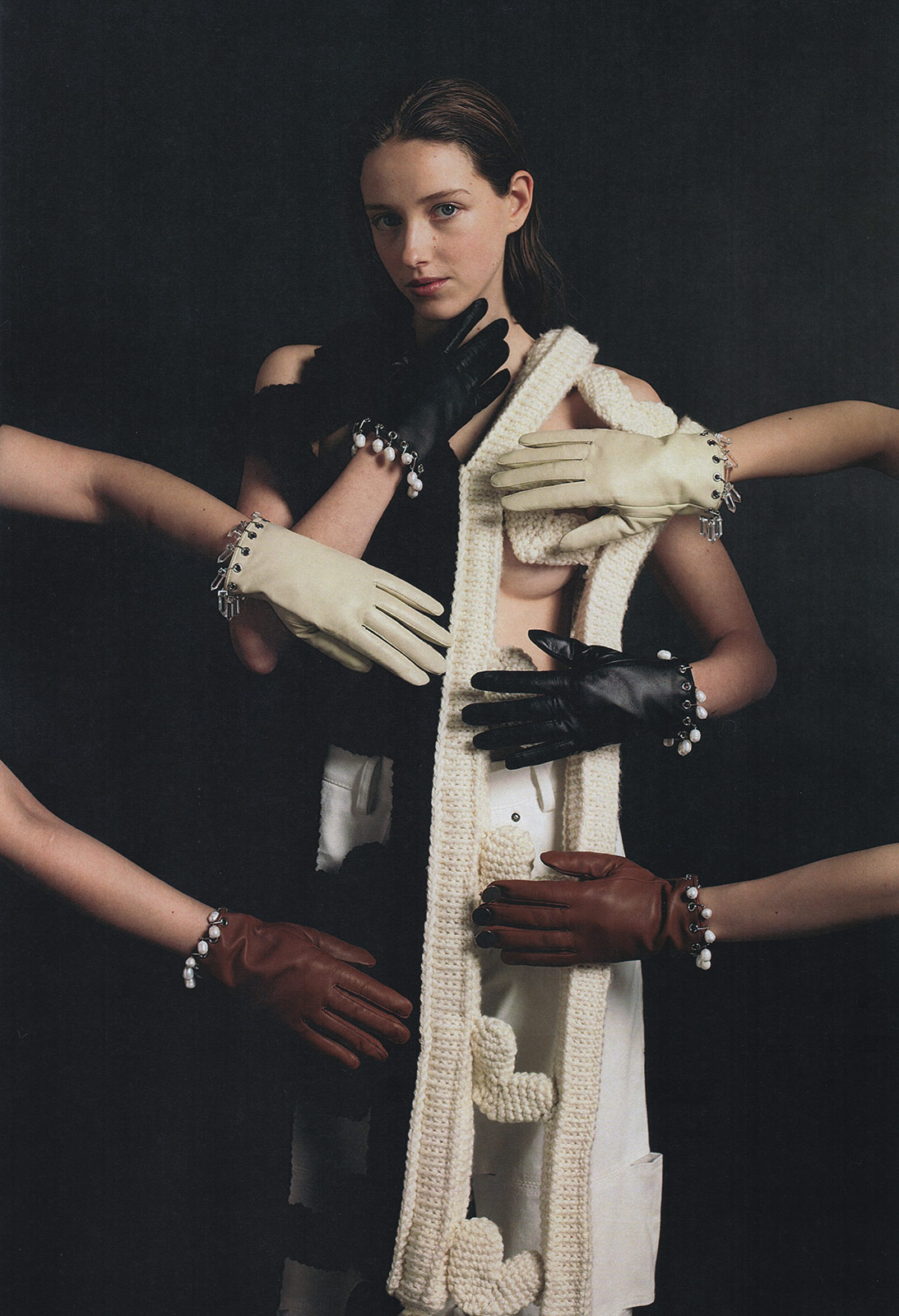 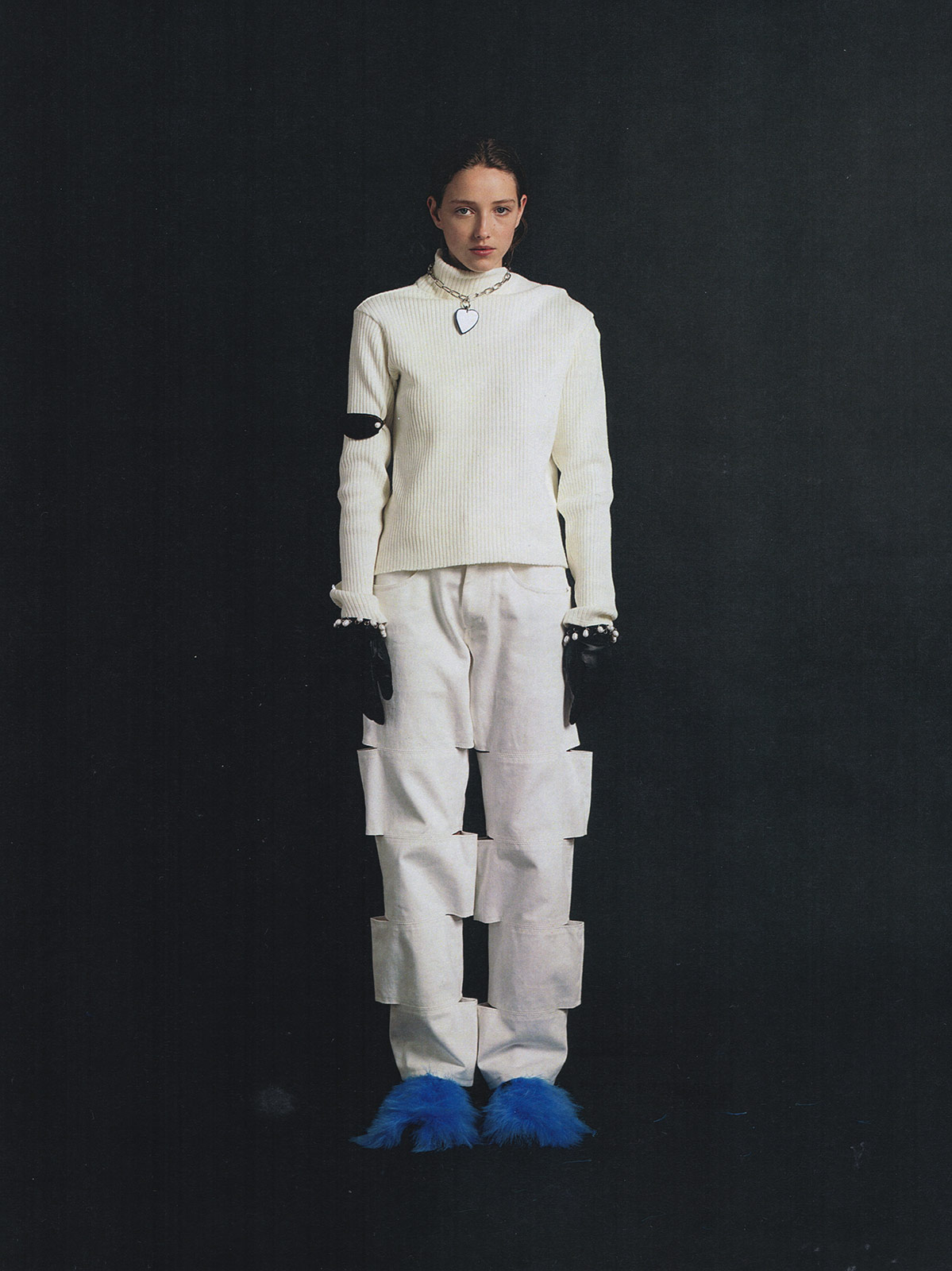 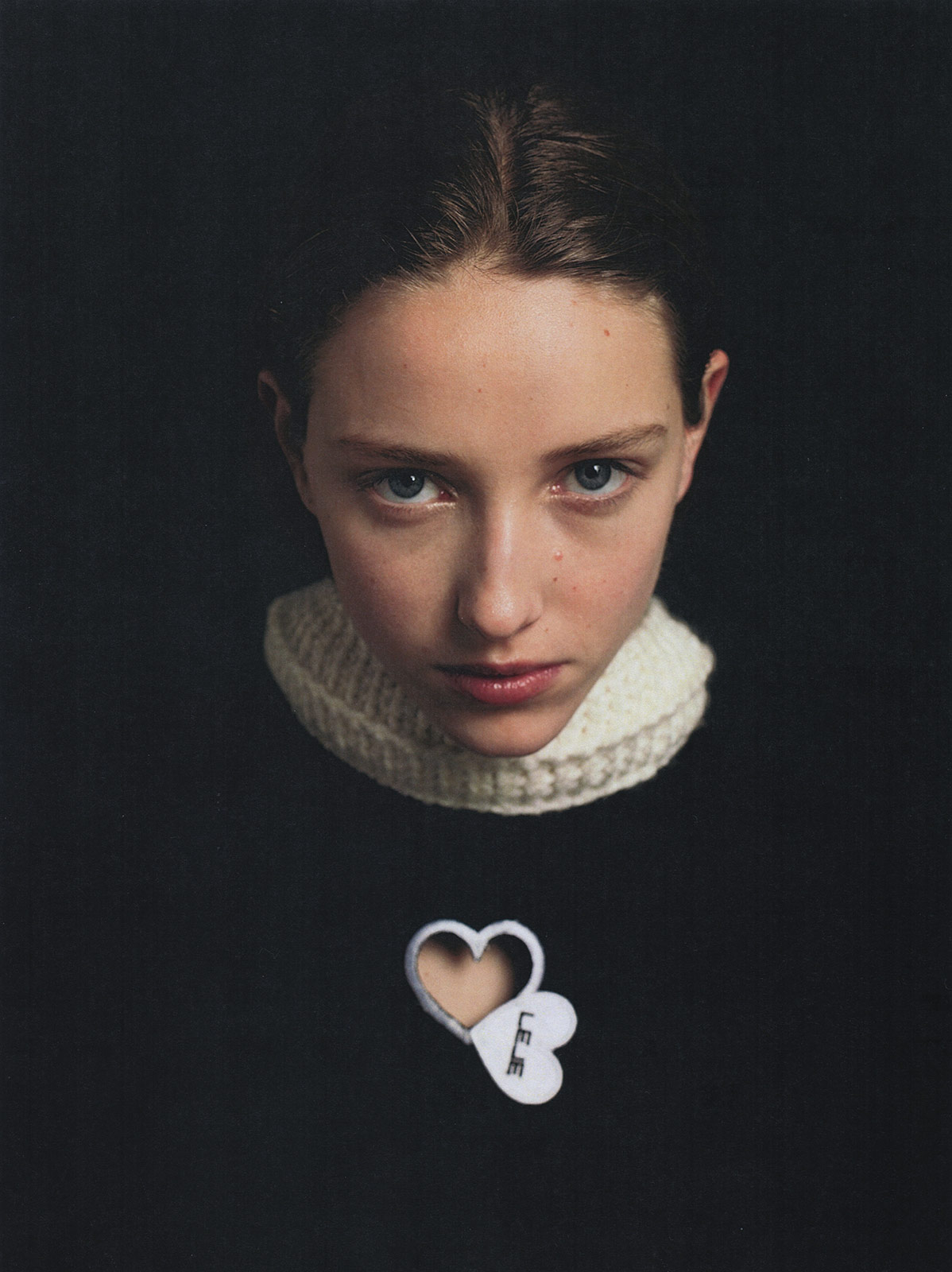