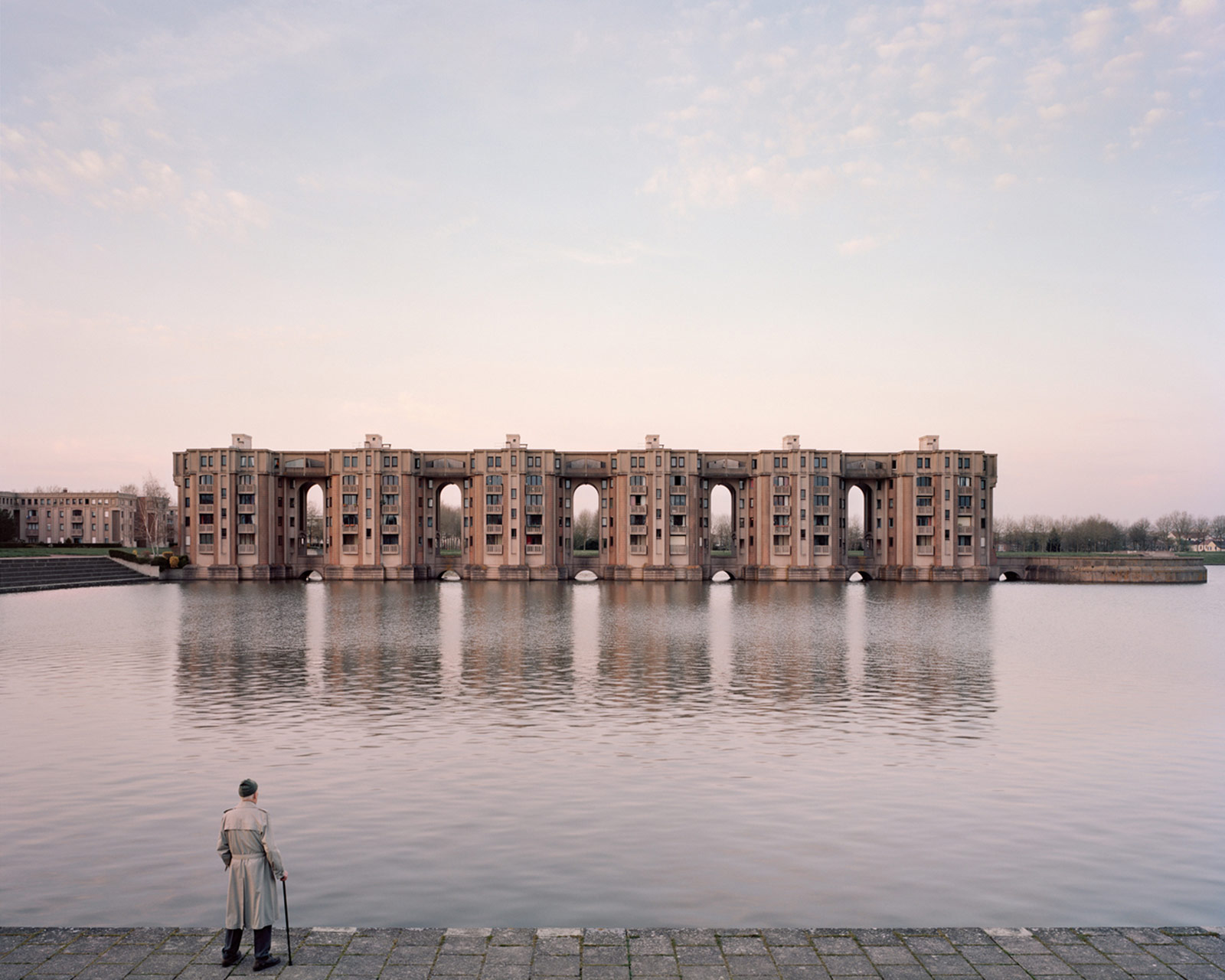 In the past five years, Laurent Kronental has photographed the titanic housing projects sitting around Paris, creating a collection of surreal and fascinating images that seem to reveal glimpses from a post-apocalyptic world. As a matter of fact, the Grands Ensembles portrayed in his ongoing series Souvenir d’un Futur were all built between the 1950s and the 1980s to manage the overwhelming urban and international immigration started soon after the end of the Second World War, and their architecture mirrors the return to adornment and reference specific to the Postmodern aesthetic. So characteristic of a certain era, their style has aged quickly, closely followed by their concrete structures that today are cracked and crumbling, and the Grands Ensembles have been increasingly associated with suburban decay and destitution. Nevertheless, they have maintained a fascinating solemnity in the face of ageing, continuing to serve their original purpose year after year. The photographer has decided to pay homage to these concrete giants picturing them together with their oldest inhabitants, ageing residents that – just as the buildings – are marked by the passage of time.

Tell us a bit about your background. When did you first develop an interest in photography and why?

My passion for the image goes back to my childhood, but I only started photography at the age of 22, while travelling for six months in China. I was then living in Beijing and was using a small compact digital camera to capture my Asian experience. From mega-cities to rural areas, everything in that country is overwhelming; I was quite impressed by the speed at which China was evolving, and the singular contrasts between modernity and tradition. I am a self-taught photographer so, after returning from Asia, I purchased a full format digital camera and practiced, strolling around the district of La Défense, which I found quite photogenic. It allowed me to develop my critical sense while learning from my mistakes. With time, I came to wonder about what I really wanted to show. It was important for me to give a meaning to my photographs.

How and when did you come about the idea of starting your project “Souvenir d’un Futur"?

I began to photograph the elderly who live in the large estates of Paris five years ago.
In 2010, as I was walking in Courbevoie, I discovered a tiny little street where time seemed to have been suspended for 50 years – countryside at the foot of the office buildings of La Défense business district. The place was surreal. I befriended a couple of old people and started to photograph them.
At the same time, I developed a great attraction towards the architecture of the Grands Ensembles. Two areas next to my home have been essential in my approach: Les Damiers at Courbevoie and Les Tours Aillaud (they are also called Tours Nuages or Cité Pablo Picasso) at Nanterre. The more I photographed them, the more I was amazed. The buildings seemed timeless, as if their reason for being oscillated between past and present. Then, in 2011 I discovered other examples of monumental and spectacular architecture in and around Paris. I got interested in their history, in the origins of their construction and their place in today’s society. I am fascinated by their oversized urbanism and their look, both rough and poetic.

What is the project inspired by?

Souvenir d'un Futur documents the life of senior citizens living in the Grands Ensembles around Paris. I was moved by the living conditions of these urban veterans who have aged there. I wanted to question myself about the conditions of their existence, to pour some light on the generation that we forget sometimes. I also wanted to undertake a project which could associate men and architecture. While tackling the large housing estates issue, I wondered whether urban structures were adapted to the needs of their inhabitants. By switching from portraits, which imply facial emotions, to landscapes, in which the person is lost in the vast neighborhood, I wanted to show the scale ratios and interactions between the person and his city.
These large housing projects are often criticized, they fascinate or bother but leave nobody indifferent. There is an unsettling paradox of life and void: multifaceted social housing projects, sometimes deserted, sometimes filled with life. At a time when all the attention is directed to youth, with indifference and prejudice towards seniors, this vision shocks the viewers by recalling the existence of these people and by highlighting their problems. In this series, from which youth has purposely been obliterated, they are the only ones filling up the space. By settling down in these futuristic buildings then, they have re-conquered a space, one that was not originally intended for them. 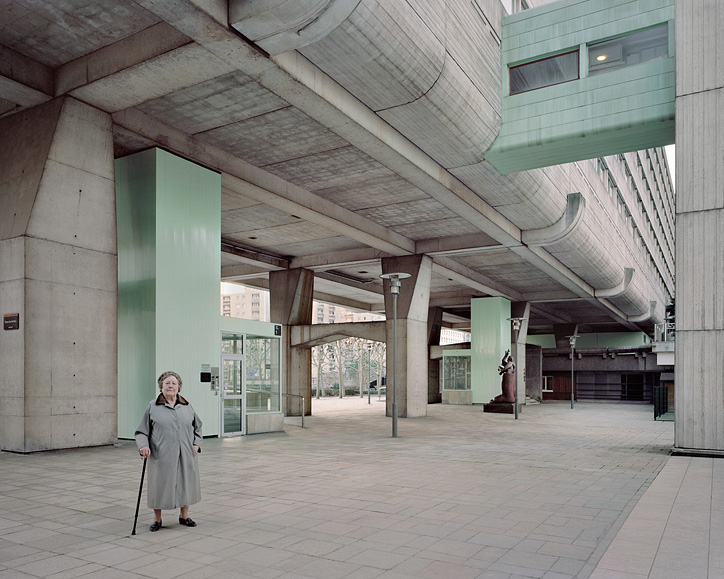 How did you approach them? Was it easy to establish a connection with them?

When I started this series I didn’t have any contacts in those neighborhoods and I didn’t know any elderly person. To find my subjects, the most effective way was to approach people that were interesting for me directly on the street. It was good for me to observe someone’s face, appearance and energy – I naturally headed for seniors whose looks aroused my curiosity. I regularly met elder people with unconventional backgrounds and often forsaken. It was a real challenge for me to explain to them the purpose of my project and the message I wanted to convey with it, to try to create a connection and to successfully achieve an atmosphere of confidence. But once barriers were overcome, I was able to notice that they needed to share their memories or their feelings.

You decided to take the pictures really early, mainly in the morning when the housing estates are quiet and seemingly deserted, giving them a ghostly and surreal atmosphere. Why did you decide to do so?

Most of the images were realized early in the morning for two main reasons. On the one hand, to have the sensation of district emptied of its inhabitants, and on the other hand, to get the soft and magic lights that, to my taste, poetize the city, glorify it and give it some mystery. I wanted to create the atmosphere of a parallel world, mixing past and future while consciously conveying the impression of towns that would be emptied of their residents. In this magnificent and ghostly world, the structures of our cities would be titanic, gobbling the human, the product of our fears and hopes for an organization of the city.
During my project, I regularly visited these neighborhoods and spent a lot of time there before producing the pictures, to immerse myself in the character and the atmosphere of the location in order to better capture it. There was an essential initial phase of discovery during which I walked around without any camera, usually early in the morning, at 5:30 – 6:00 am. It was an amazing feeling: the silence of the sleeping city and the scattered apartments’ lights glittering in the dark.

Is there a particular picture from the series that you are attached to?

There are several images to which I am particularly attached. For example, the one of Espaces d’Abraxas. I was stunned by the atmosphere that emerges from this district, built between 1978 and 1983. It was the anchor point of my series, the real inspiration for the story that I wanted to tell. I went there numerous times before taking this photo one morning of 2014. On the balcony there is an 88-year-old man called Joseph who has lived in Noisy-le-Grand for several years. In the foreground appears a massive building whose curvature reminds that of a theatre, at the top of which balconies look like loggias. On one of them, Joseph bravely stands up, with a distant gaze, in face of a world which seems to age slowly and to take with it the memory of a utopia. His presence on the set, where he is not expected, questions us about the place of these urban veterans in our society.

Does architecture interest you from a theoretical point of view as well, or is it mainly a visual fascination?

Architecture interests me essentially for the emotion that it provides to the ones who look at it or live in it. For me, this emotion arises equally from the sight, from the esthetics and from my feelings regarding the people I meet there.

Do you think you could or would like to expand “Souvenir d’un Futur" featuring other housing estates in other countries or is the project intrinsically tied to the “Grands Ensembles”?

I am currently working to enrich Souvenir d'un Futur. I am taking new photographs in other districts of the Paris region. I am not sure if I would expand this project in other countries, in any case not by linking the elders to the spaces. Nevertheless, I will maybe make another series one day on this kind of town planning, which is fascinating. The subject is not intrinsically tied to France insofar as there exists other large estates in Europe.

Do you have any new projects in mind?

I have worked for two years on a second project, which I will probably release in 2016. The series is on a specific large housing estate but this time seen from inside. 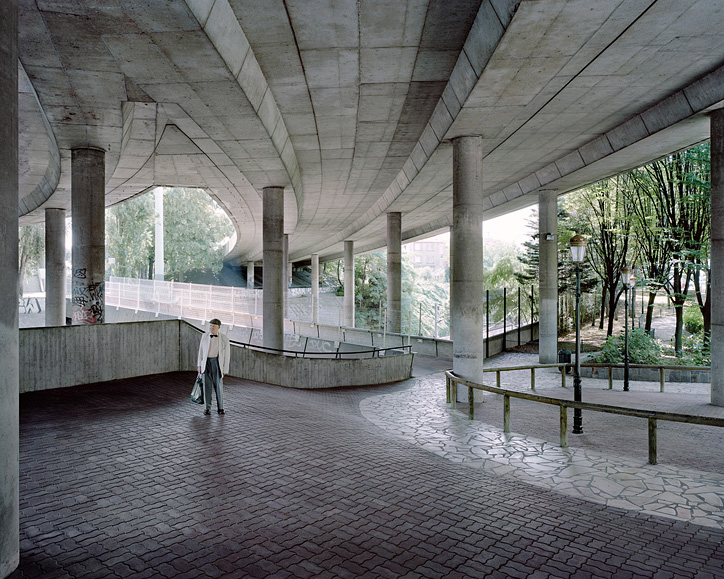 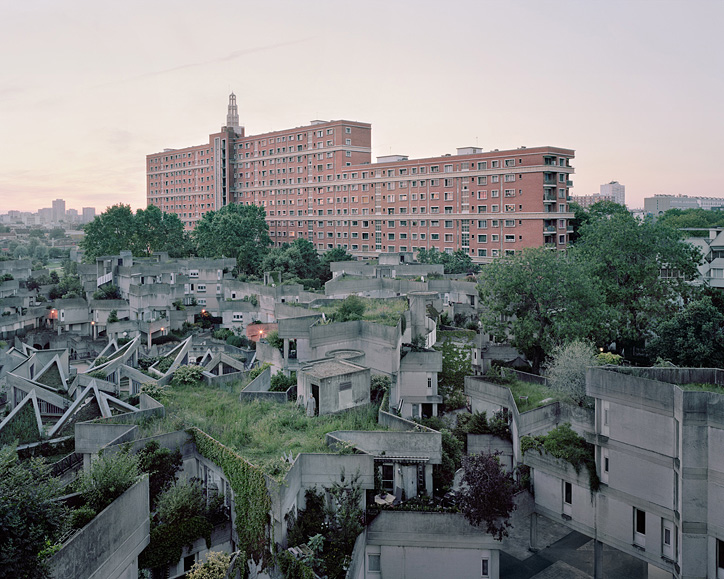 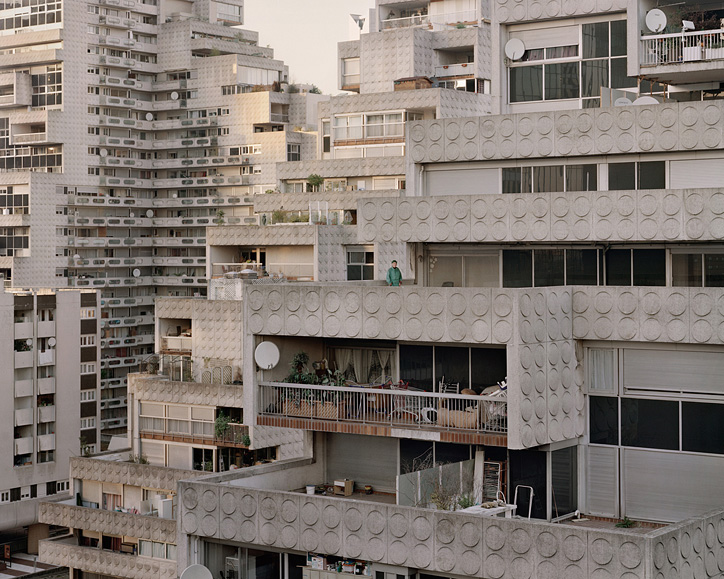 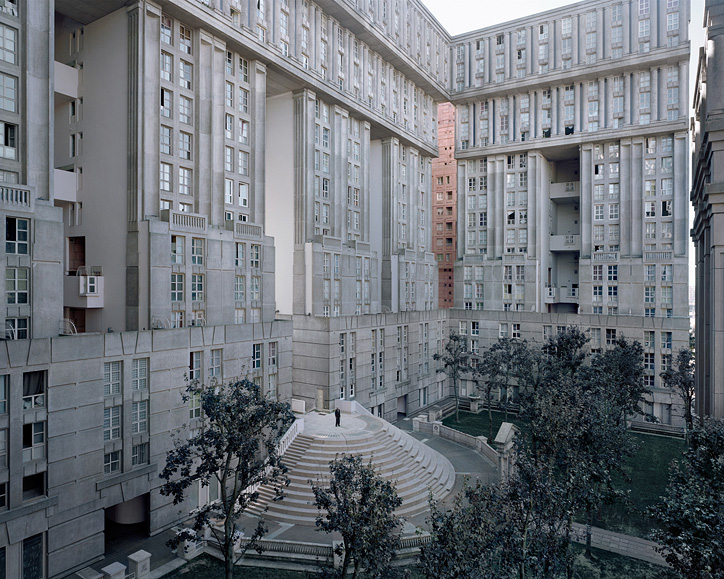 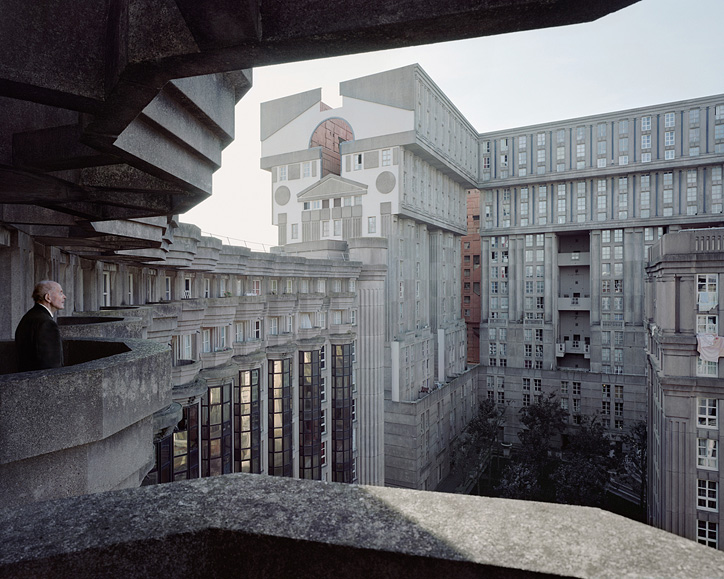 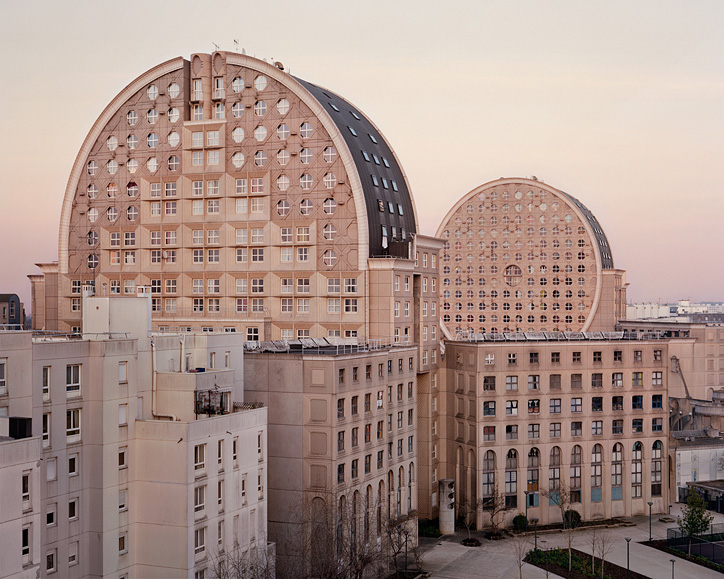 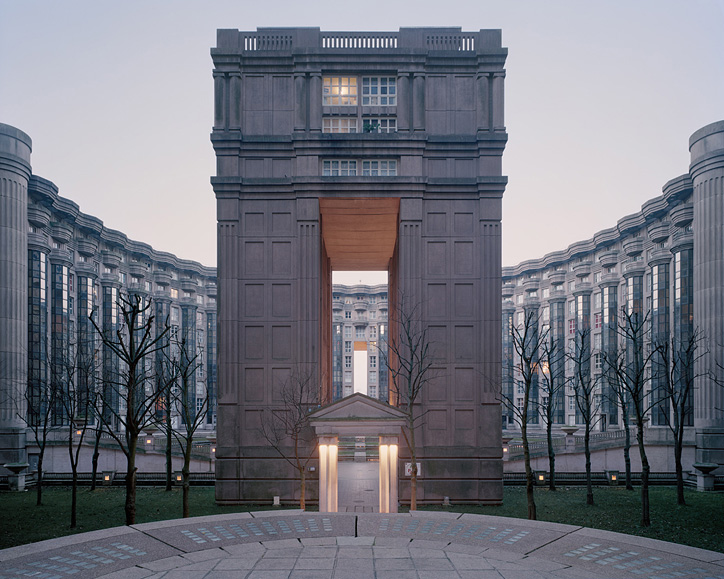 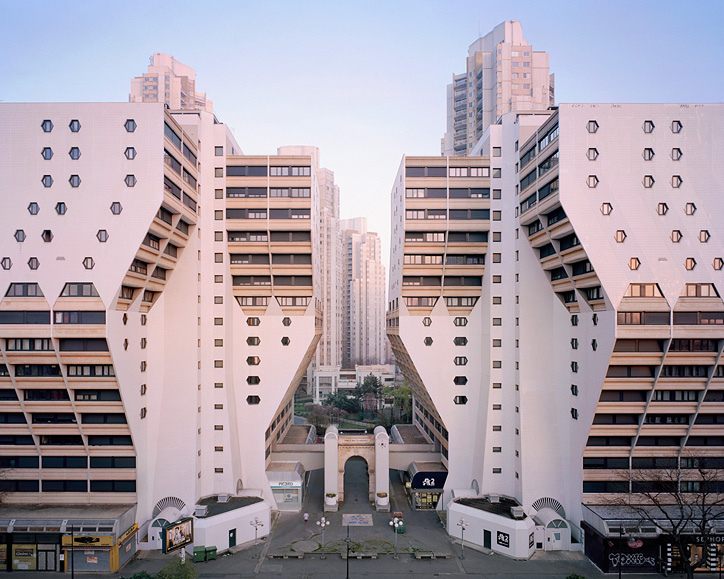 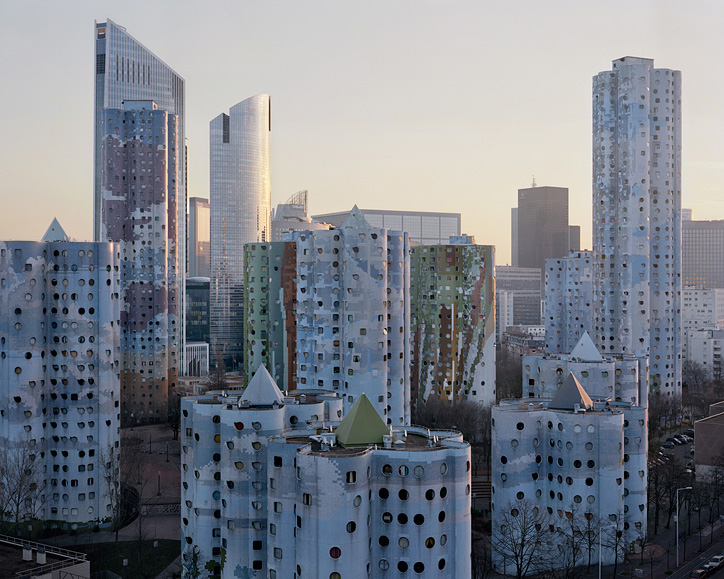 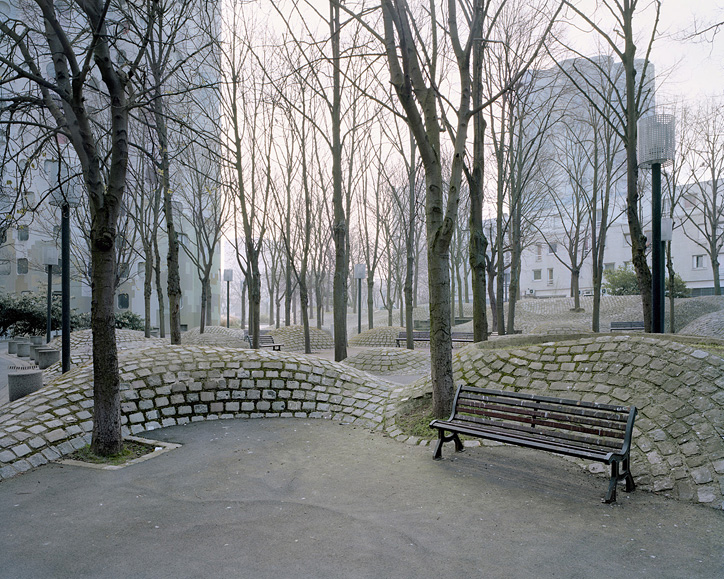 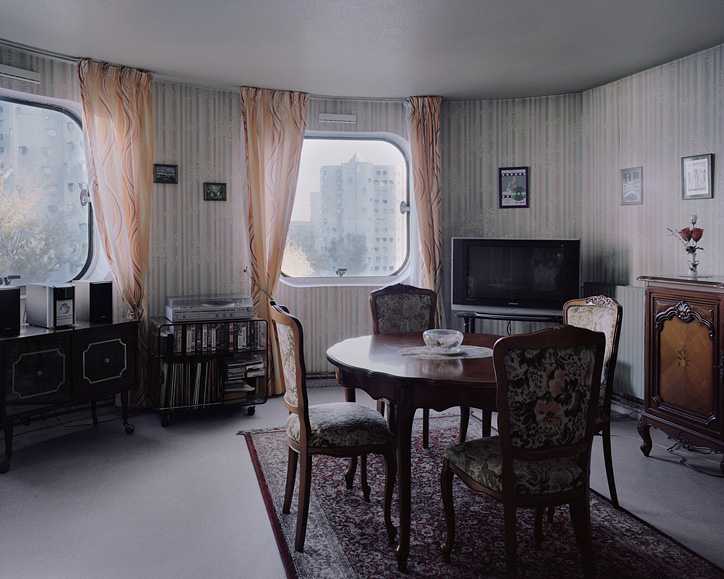 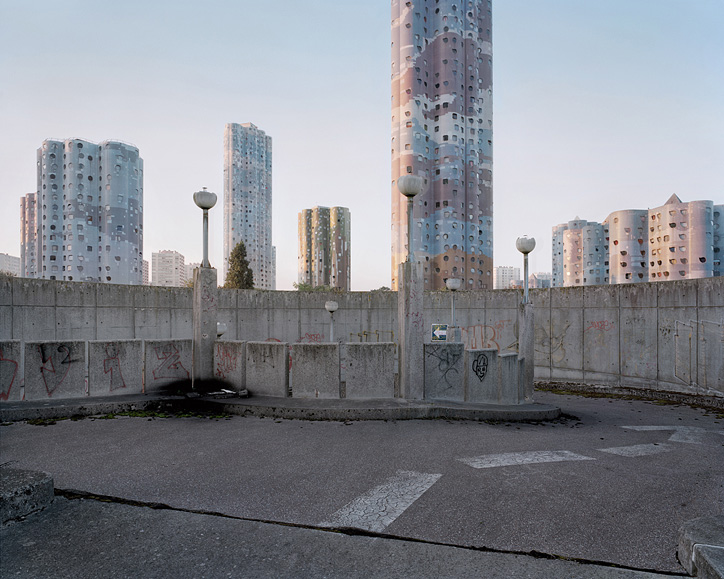 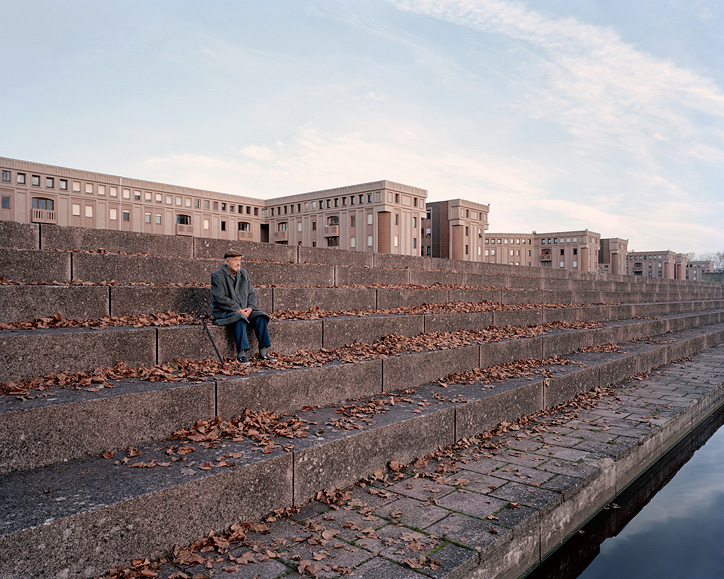 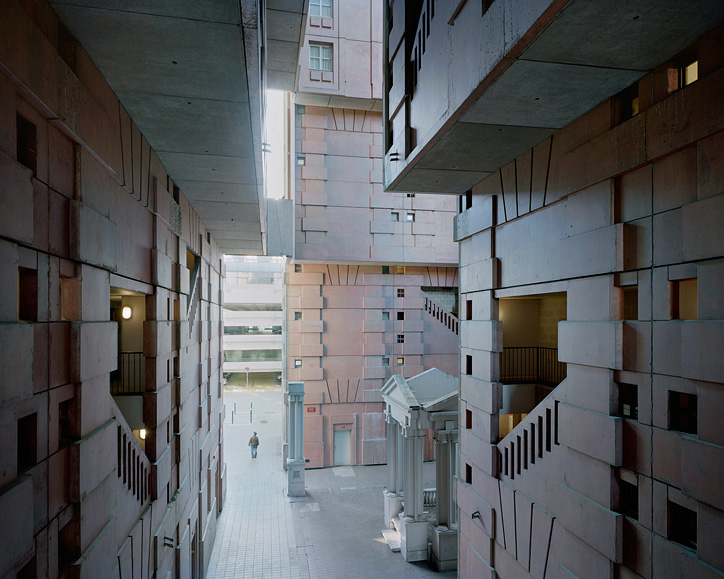 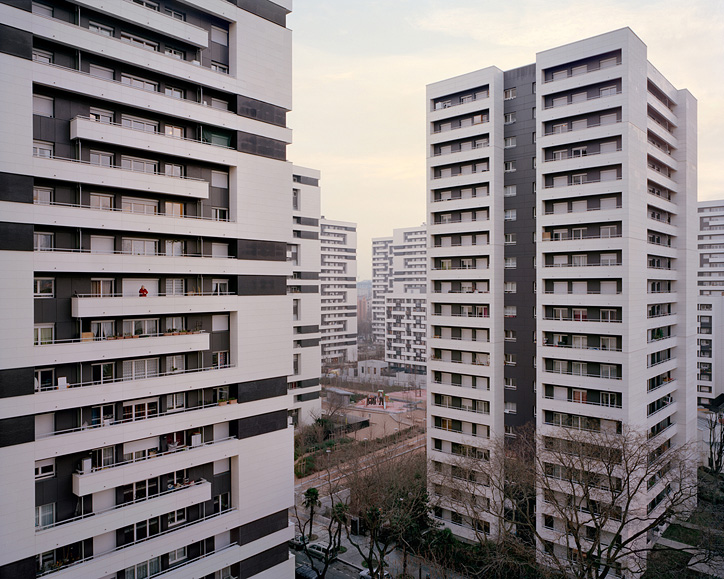 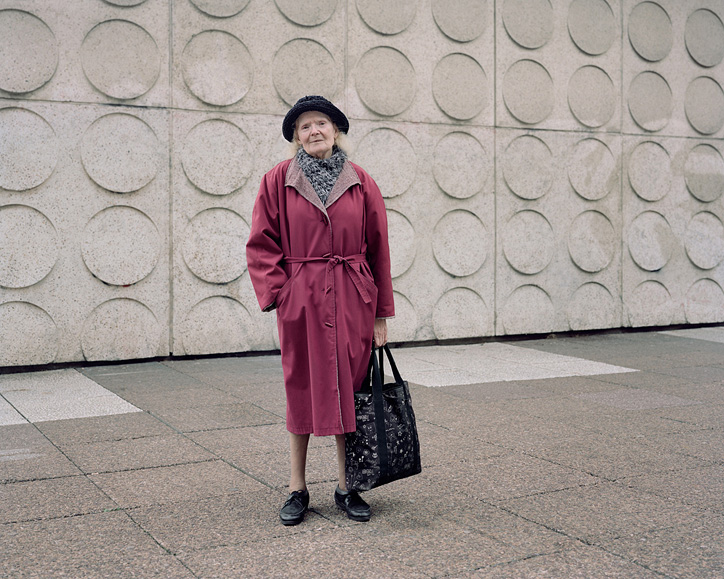 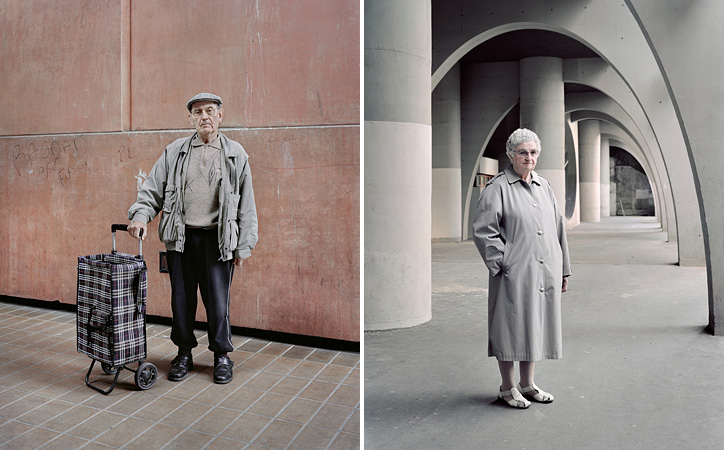 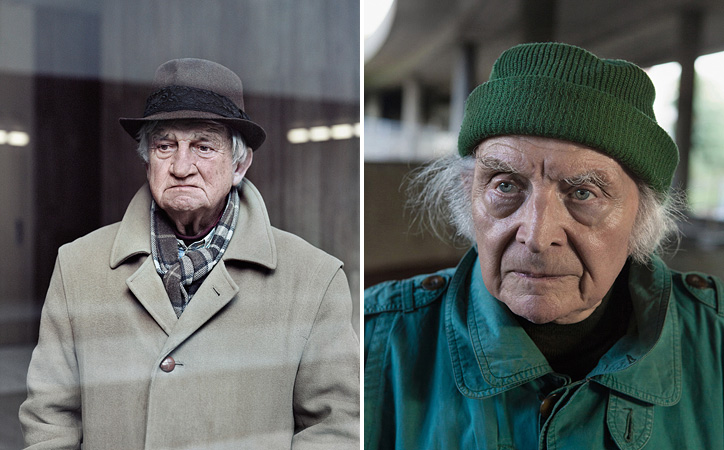