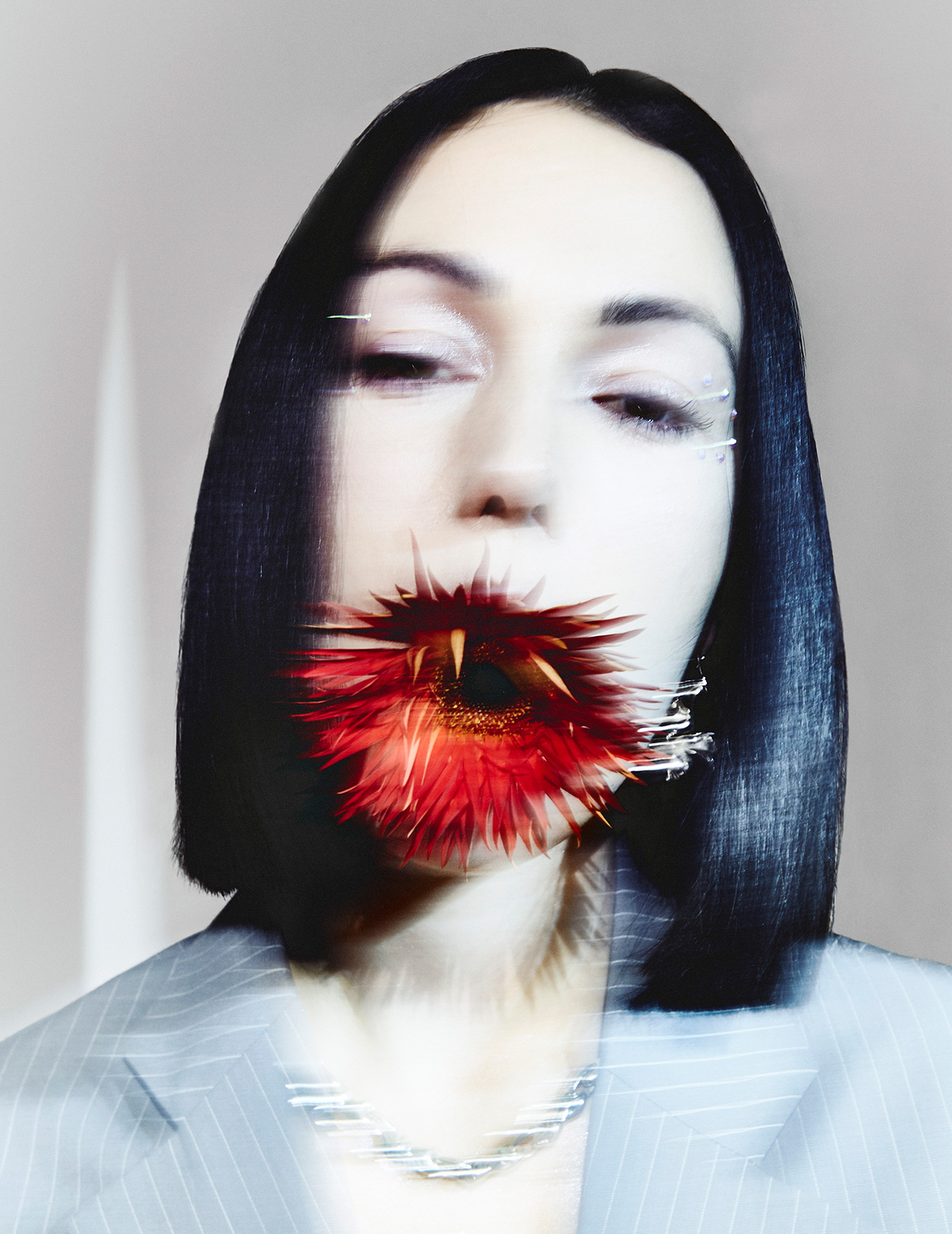 Kelly Lee Owens wants you to heal. The Welsh electronic music artist has had a productive 2 years. This past spring, she released her eight album, aptly titled LP.8. Owens forestalled albums 3-7 to work on an urgent album exploring themes of healing, release, and transcendence. The artist invites us to join her in entering a time machine to an ancient future.
Owens did not begin her career in music, but healthcare, working as an auxiliary nurse in a cancer ward. In this role, she learned a great deal from her patients and followed their advice to pursue her passion, music. She has also spoken about her experiences in this ward as giving her proximate experiences of death. Her attention to healing and trauma is especially present on this album. From the opening song, Kelly Lee Owens introduces the theme of bodily and psychic release. She pairs the mantra-like lyric, “release,” with “the heartbeat of a kick drum” to lead us into the album – and to help us use dance and movement to release embodied trauma.

Owens began her career in some of London's coolest record stores. She would meet some of her first collaborators in Pure Groove, Rough Trade and Sister Ray. She found her momentum and sound there, befriending Daniel Avery, James Greenwood, DJ Andrew Weatherall, and many others, and would contribute to their projects throughout the years. It was also there that she first met Björk for whom she would later work on a remix. Briefly working with a band, she sought to find her own path and would go on to release her self-titled debut album in 2017 to quick acclaim.

Then, the pandemic happened. Her second album, Inner Songs, was delayed in its release. She was stuck in London for a year and would not leave until she flew to Norway, an hour before borders closed once again. In Oslo, she felt “calm, peaceful and hopeful,” and began work on her most recent album with Norwegian musician Lasse Marhaug.

LP.8’s themes are not new for Owens. Yet, she seems to present a collection uniquely focused on the healing power of sound with this project. As she tells us, the album is a collection of sounds that are a starting point in many ways. But the music is not enough in and of itself. In a listening party at Sydney’s The Phoenix Centre, Owens curated a special night and invited the audience to lie on the ground to experience her music. She also released a fragrance with Haeckels to enhance the listening experience of LP.8; it's all about grounding yourself in your body and beginning the healing process. The trauma of the Covid years is immense and collective, and her album is an urgent reminder of the necessity of healing. Kelly Lee Owens discusses her work process, her relationship to sound and her love of all things analogue.

Kelly, congrats on your new album release. How has your tour been?
Thank you! Tour has been wonderful, but crazy. Chaos energy tour 2022 we’re calling it – mainly due to the unpredictability of travel – but generally it's been full of joy and connection. I feel immensely grateful to be connecting with people in this way again!
What happened to albums 3 to 7? Can you tell me a bit about the title of your new record?
Haha great question! I feel like I’m yet to write album number 3 (as I see it). I felt the pandemic gave me an opportunity to jump into a time machine, to create yet something connected through the expanse of time – an outlier for me for sure, but something simultaneously ancient and futuristic.
Your cover is simply mesmerising. Can you tell me about your work with Josie Hall on the art?
Working with Josie was phenomenal. She’s very analogue in her approach (which I connect to deeply) using real effects in a very physical way, not relying on post-production too much. I love that. It also very closely represents the sonic journey of LP. 8 – barely anything digital was used. I just captured moments as they appeared to me.
Speaking of collaborations, how did you and Lasse Marhaug initially connect on the project? You have spoken about usually taking charge of the production of a record, what was the process of collaboration for this project like?
Joakim from Smalltown Supersound connected us. The process with Lasse was very simple, we would meet every day for coffee in the morning, have wonderful chats and then head to the studio, which usually consisted of me with a synth on my lap, him tweaking the Pulsar 23 with me. Then, I'd record and layer vocals, breaths and find weird and wonderful instruments to play. It was very free and very experimental. Zero pressure. A very magical time of creation for me, which I’m extremely grateful for. 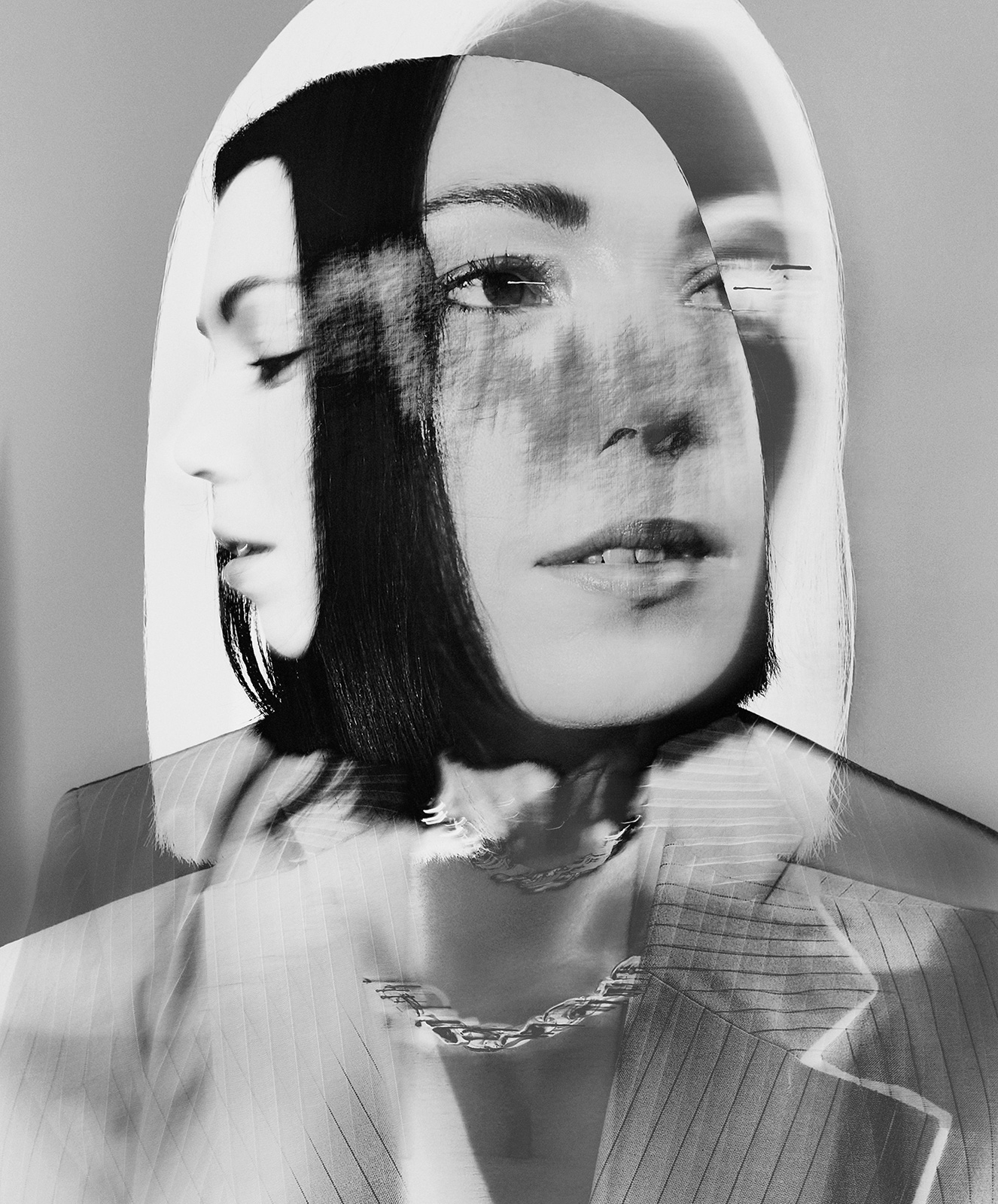 I find the transposition of your electronically conceived music onto analog vinyl records a quite interesting decision. Why release it on vinyl?
Because really, it’s all based on my love for analogue synths, sequencers etc, electronic music isn’t just digital and that’s why it’s so interesting to me. Vinyl has always been another deep love of mine – it’s important to me that things exist physically – to have something tangible – that really matters.
The tension between industrial, percussive sounds, and spiritual motifs is something present throughout LP.8. It seems to be particularly present in Release, with the mantra-like repetitions accompanied by a metallic soundscape. How do you experience these sonic tensions as an artist? Do they come to you before a song is composed, or after elements begin to consolidate?
There are always words and concepts floating around my head, related to what I believe in and how I live my life. Release for example being related to my experiences with somatic therapy and healing and the idea that trauma is stored in the body. But actually, it’s ancient knowledge that dancing and moving the body can release trauma. The heartbeat of a kick drum also has been used for millennia by humans to move to. So, this is a nod to that ancient modality of healing and an initiation into the body of work itself – a warning that we’re going in...
You posted a video of people lying down in Sydney listening to your new album. Can you tell me a bit about sharing space and sound in this way? With such varying sound feels across the record, how do you envision it being experienced?
Oh my god. This was a huge moment for me. I’d worked incredibly closely with The Phoenix Centre in Sydney to curate this night. From designing lights, lasers to tweaking and tuning every track to the room itself. LP. 8 to me doesn’t feel right to perform as such. It’s not about ego. The focus is the deliverance of sound and how that can encourage release. I’ve also designed a perfume with Haeckels specifically designed to enhance the listening experience of LP. 8 and also beyond that a scent to uplift you every day – whilst simultaneously grounding you in your body.
Especially on your new album, I keep finding sonic nuances that sneak in after a pattern is introduced. For example, the chirping click that ever so subtly fades in on your highly percussive Release. How did you source the sounds found on this album?
It’s so great to hear this, as that’s fully intended. The subtle changes present in repetition – and how that can help change consciousness – the sonic ritual. Those particular sounds came from one place, the Pulsar 23, it’s a semi-modular drum machine, one of the most versatile and interesting drum machines ever. The only found sounds on this album are in Nana Piano where I sampled birds and also recorded the whole piano on my iPhone – basically because I never thought anyone would ever hear it. 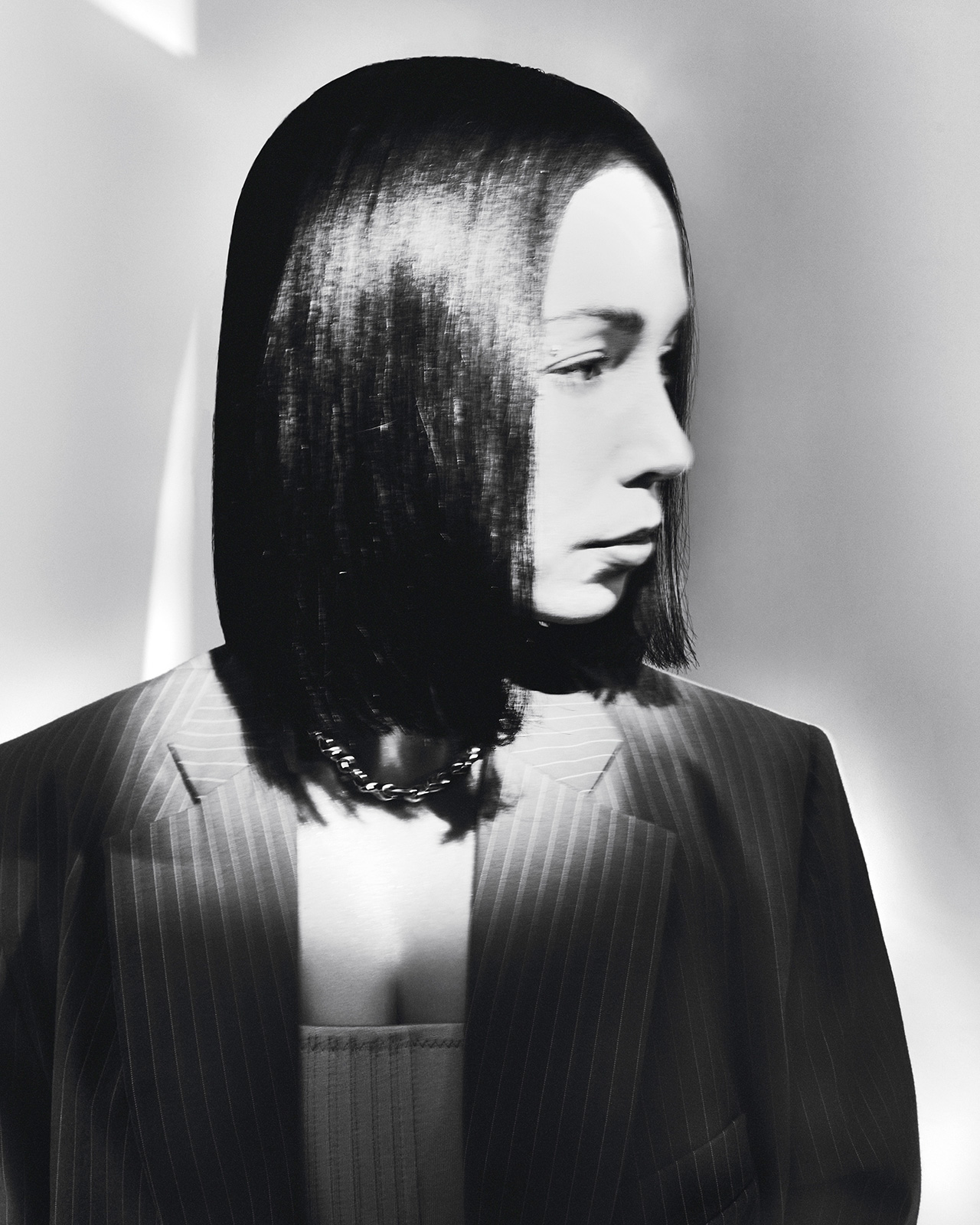 I understand you worked on this album in Oslo during a hotter period of the pandemic. What was the process of creative collaboration like during a time of isolation? Were you able to connect with your usual sources of inspiration?
Yeah, I laned in sub-zero temperature an hour before the borders closed in Norway, it felt totally right. I felt calm, peaceful and hopeful after being stuck in London for a year. The usual sources of inspiration are luckily usually within me, so I carry them wherever I go. But Oslo is beautiful and has great food and coffee which of course helps.
LP.8 seems to feature a different use of your voice than in previous records, ranging from whispers, to spoken word, to singing. What brought this shift for you?
Understanding more about, and being interested in, the use of voice as a tool again. How powerful breath is. How it’s the first instrument and the most vital exchange in this lifetime somehow. It’s so versatile and I don’t think we use it properly. It is a vehicle for healing and transcendence – so I was experimenting with that.
Can you talk a bit about closing with a track as urgent as Sonic 8. What were you considering when writing that song?
The instrumentation was written first and it was certainly a moment of release of tension and frustration. Then the words poured out of me. I actually recorded a lot more than what you hear, which was more direct. But in the end, it was edited out, as less seemed to convey more - the silence in between the words being as important as the lyrics themselves.
Congratulations on the FIFA Women’s World Cup 2023 Theme! How did you approach this project?
Thank you! It’s such a wild thing to have created. A huge moment for me. I was given some guidance as to what FIFA wanted of course, but generally just encouraged to go big, epic and euphoric! I also named the track Unity which is because it felt like something as big as this tournament could unite the world in a positive way – which is so needed currently.
What is next for Kelly Lee Owens?
Perhaps some collaborations and I’m definitely going to be entering the next album writing phase – my third record. 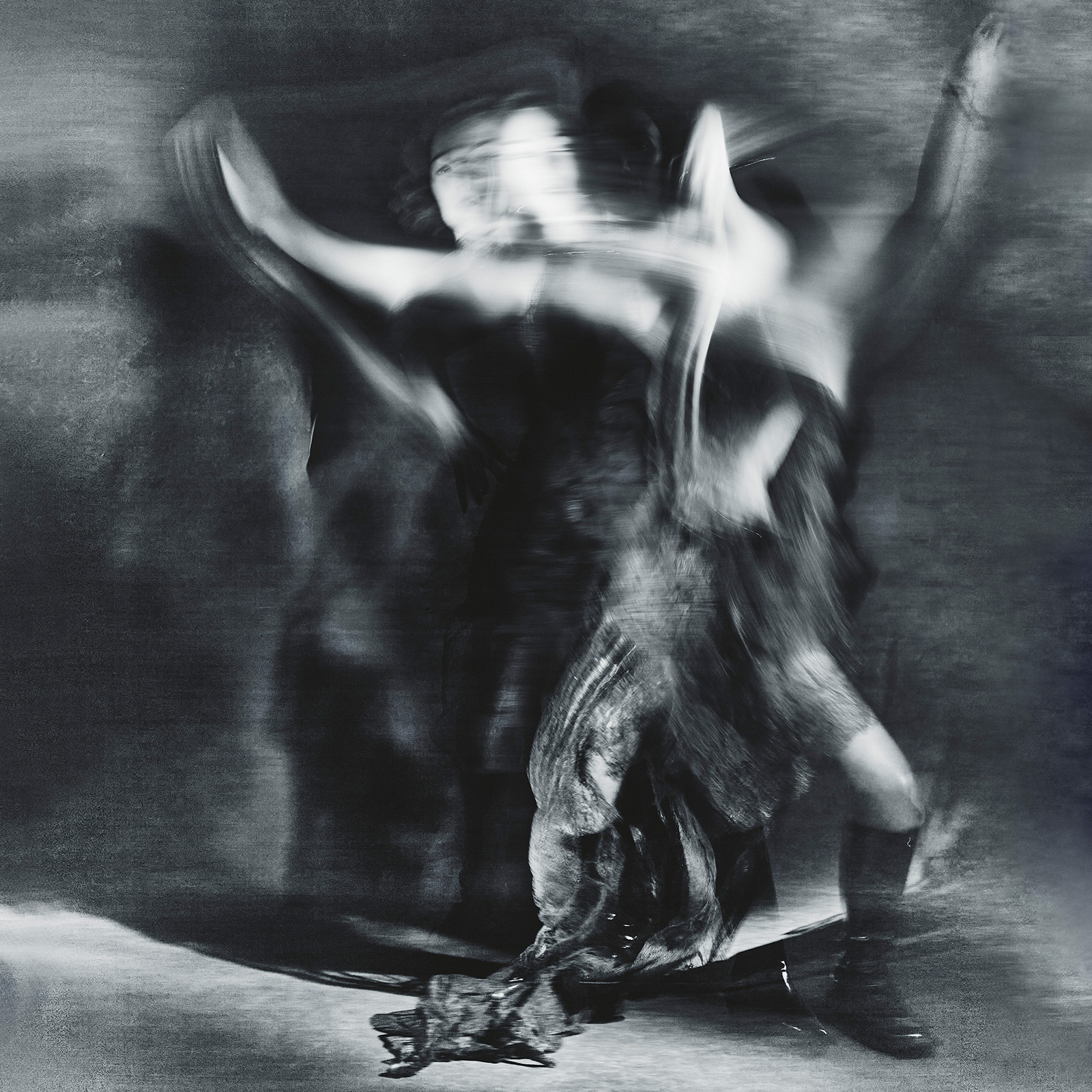