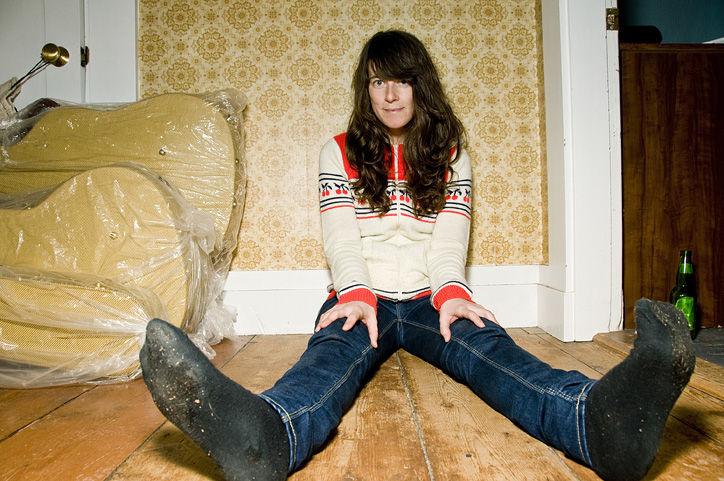 Julie Doiron can’t stop creating. After 22 years releasing music material, the Canadian artist is embarking a new adventure singing in Spanish for the first time. She has a gift and can turn the coldest place on Earth into a warm one only with her music. She’s currently touring Europe, so you might have the chance of enjoying her life-like music live.

How would you introduce yourself to somebody that knows nothing about you?

Well, I guess I would say that I have been playing music since I was little and making a career of it for 22 years. I’ve released many albums, both as a solo performer and as a band member of Eric’s Trip, and I continue to collaborate with friends. I feel extremely lucky about this! Also, I am a mother of 4 children and that is my biggest blessing along with being born into a family who have always loved and supported me.

If you had to describe your music with only one word, which one would you chose?

You started playing in a band when you were 18, how has the music industry changed since then? Is recording easier now than before?

A lot has changed. It goes without saying that the internet has changed everything. It has both made things easier and harder. Easier because we can reach everyone constantly. We can make connections with fans, music promoters concert bookers. People can listen to anyone they want to, anytime they want! And that has helped us discover so many artists that we never would have discovered… On the other hand, because we can listen to everything, watch everything anytime, it means we don’t have to ever leave our homes. We don’t ever have to actually buy anything. And there is so much to choose from. Because musicians can not survive on record sales anymore, they have to tour all the time. And therefore everyone is touring all the time but less people are going to shows, it seems… But recording is easy, yes.

Some of your songs remind me to 60s music like Scott McKenzie or Mamas And The Papas because of the way they’re mixed, what you hear on the right channel is totally different to the left one. Are they part of your inspiration?

I can’t really take the credit for the mixes. My last three albums were recorded and mixed by my friend Rick White from Eric’s Trip, he takes mixing very seriously and loves doing it. So I trust him to do it and leave it to him. He sends it to me when he is done, and then I can tell him if I want to change anything, but usually it’s perfect.

Your lyrics seem to talk about some very personal and intimate thoughts. Are all of them mirrors of your feelings and based on true stories?

Some of the lyrics are coming from true stories, but many times I am just trying to convey a feeling or emotion. Sometimes I write about stuff I am experiencing and sometimes it is stuff I am just observing.

Most of your songs are very calm, with acoustic guitars and soft drums, but not all of them. Two of my favorites are Consolation Prize and Tailor, both of them very danceable. When you are composing, how do you decide the way you want them to sound like? Is it about the mood you are on that moment?

I think most of the time the songs kind of decide themselves. Often, while I’m writing, I have an idea of how I think the song should sound, but really most of the time it is a pretty organic process. I don’t really have any set rules on how to work when I’m writing or recording.

You’re starting your Iberian tour with 11 dates and you have a little surprise for us: you’re selling 75 limited copies of your new LP Julie Doiron Canta en Español. You have released an album in French but this is your first time singing in Spanish. Are you going to sing Swan Pond and Yer Kids live in Spanish too? Do you actually speak Spanish?

Well, my older daughter actually speaks Spanish pretty well. I have wanted to learn for years but haven’t really been able to dedicate myself fully. But I know how to get by a little bit. As for the songs, I think I will be singing them in Spanish. I do love the language so much.

We know you love photography and you have even released an art book called The Longest Winter. Are you still practicing this hobby? Do you have some new photographic projects in mind?

I have nothing planned at the moment, but I have many undeveloped films that I may try to develop soon. I still take many photos.

Canada is the dome of some good quality musicians. It happens something similar here in Europe with the Scandinavian countries. Do you think cold is a good ingredient for making good music? Is it inspiring to you?

Yes, I do believe it helps. Firstly, I find the winter to be very inspiring. The big open fields covered in snow with big open skies really are romantic and painterly. And I think when we live in a very cold climate, we play a lot of music ‘cause it is so cold outside and it gets dark so early in the day that we end up having nothing else to do, especially when we are young.

Last year you told your Facebook followers that you had some new material for another winter inspired album. When will we be able to listen to it?

I think I am going to try to record it this autumn and it will probably come out in the spring of 2016. I am really looking forward to making a new album!