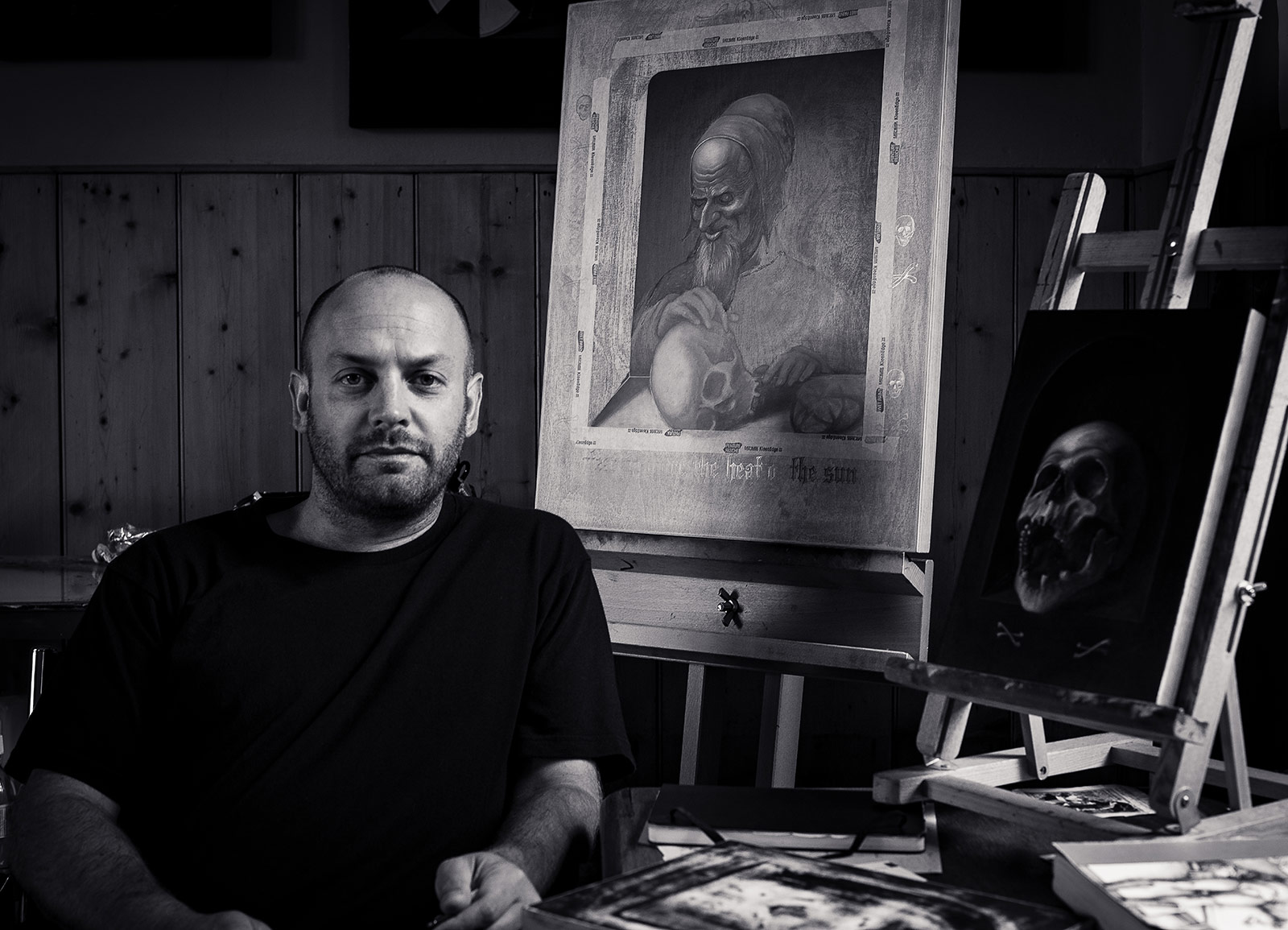 When you first see John Stark’s paintings, you feel like you already know them, even if just a little bit. And that’s because he uses some of the most recognizable and relatable symbols and themes: monsters, fear, belief or death. A masterfully skilled painter, Stark’s artworks combine the best of two times: that which is eternal, related to humankind’s desires and fears, and that of now, the one we live in. Watch his work and travel to faraway lands of non-existing creatures that are actually more similar to our world than we would like to admit.
How did art become your profession? Did you know as a child you wanted to be an artist or was it more of a detour during college years?
I’ve always made images, since I was old enough to hold a pencil I think. I always enjoyed that space of escape and all the problem solving that came with it. And like most artists it was never really a choice, I just kept doing it, like a bad habit or a sickness. I did some pretty tough jobs as a teenager, which made me realise very quickly what I didn’t want to be doing, so I tried very hard at art school and eventually made it into the Royal Academy Schools in London. Twenty years on, I’m still trying hard and it never ceases to challenge me, that’s the addiction. Painting is so unforgiving.
You once mentioned that you intend to trace how myths and legends were used through the historical timeline to understand human nature. What are your conclusions?
I try to address issues such as love, fear, belief, solitude and death. Myths, it seems, have been able to make some sense of what little we do know. However, it is consciousness that makes us such incredibly complex beings, this awareness of our place in a vast unquantifiable universe and the inevitability of death.
Can you give us your input on the concept of human nature?
Unlike other animals that just eat each other, we are capable of deceit and betrayal. I try to think positively of humankind but our potential for evil does frighten me when I see what we have been capable of throughout history. So as Jung said, we have to confront our shadow, our darker side. We have to understand what potential is contained in all of us and take responsibility. It is a terrifying realisation but we all need to understand that. 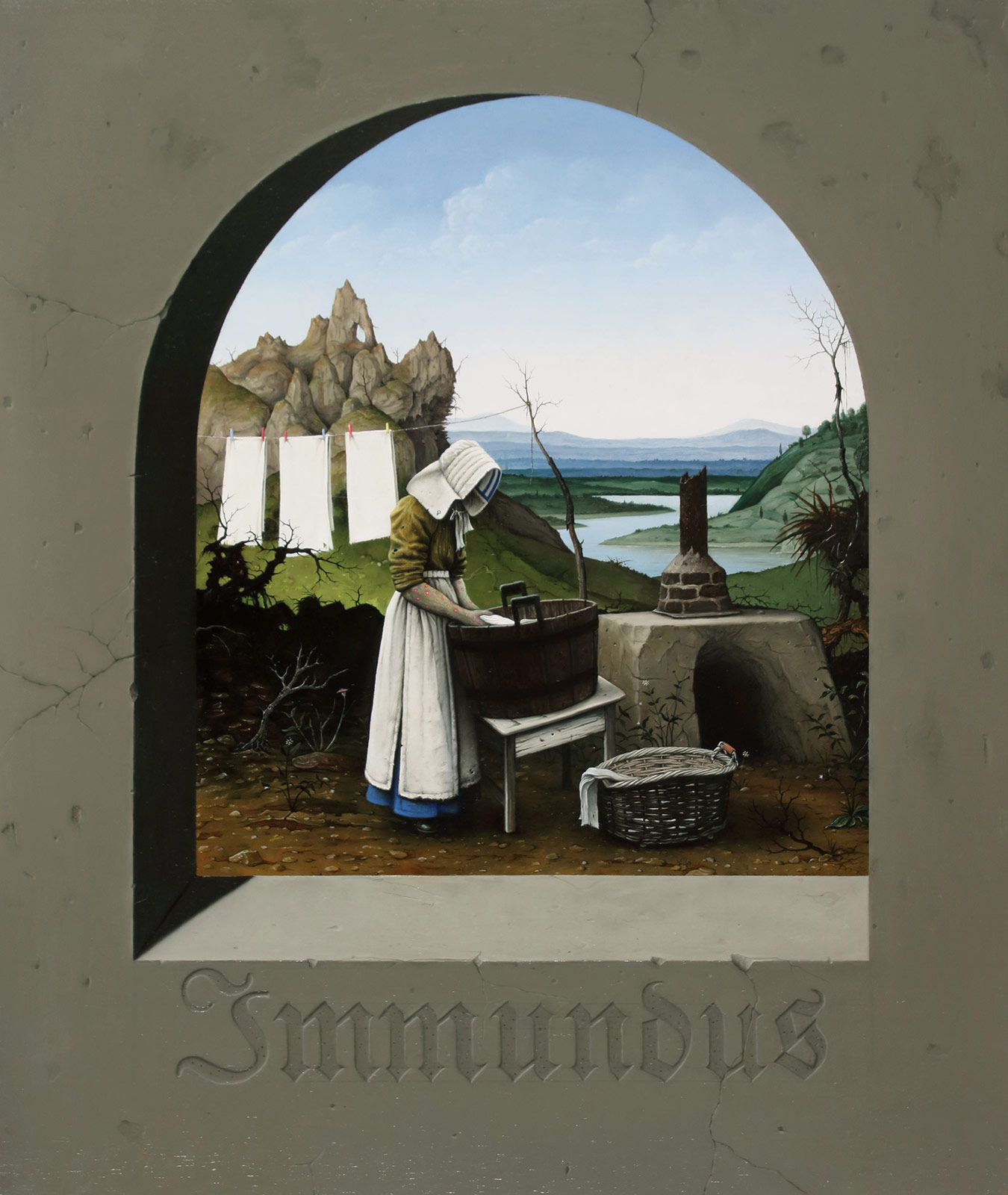 Out of all the folkloric beliefs traced through time, which legend or myth is your favourite and why?
That’s a difficult decision… It’s between Medusa and St. George and the Dragon. Either way, they are both hero-versus-monster myths although slightly different. What’s great is how this archetypal myth can be applied to almost everyone’s everyday lives because we all have monsters to overcome and are facing some kind of resistance to the goals we want to achieve.
But going back to the question, I would have to choose the myth of Medusa and Perseus. The idea of Perseus’ shield as a mirror to reflect the gaze which turns people to stone is very powerful and, as a painter, I can think of painting as a deflective shield – deflecting the attacks from all monsters and by doing so acknowledging their very existence. Medusa herself is also endlessly fascinating, operating in a liminal space between beauty and horror, attraction and repulsion, sympathy and rage. Ultimately, hers is an enraging story of cruelty. She was raped by Poseidon and then punished for her sins with the curse of monster-ness for eternity. So although there is this natural impulse to ward monsters off, we also have this hankering for the monsters’ triumph.
Yes, that’s a cruel one…
When I think about it, it does seem most myths involve some battle or struggle. I suppose I could cheat here by choosing the grand redemption myth of Christianity, the ultimate description of human struggle ever imagined, where perfect eternal goodness battles with utterly determined evil for the soul of humanity. Not necessarily agreeing with it but it’s likely it’s the number 1 top story that most accurately captures the reality of the human condition.
Unlike the scenario of a utopia (the idea of a society that lives and breathes perfection), you portray the opposite in your paintings: a dystopia. Do you believe you are foreshadowing humanity’s doom?
Possibly. The future does look bleak, doesn’t it? But I’m not making a political decision to show a scary apocalyptic world to frighten people, it comes out naturally that way. I’m drawn to create something out of the dark. I have tried to create works that aren’t dystopian but they always lack a tension I’m searching for. Maybe I just like fighting monsters; if you don’t go to them, then they will come for you. 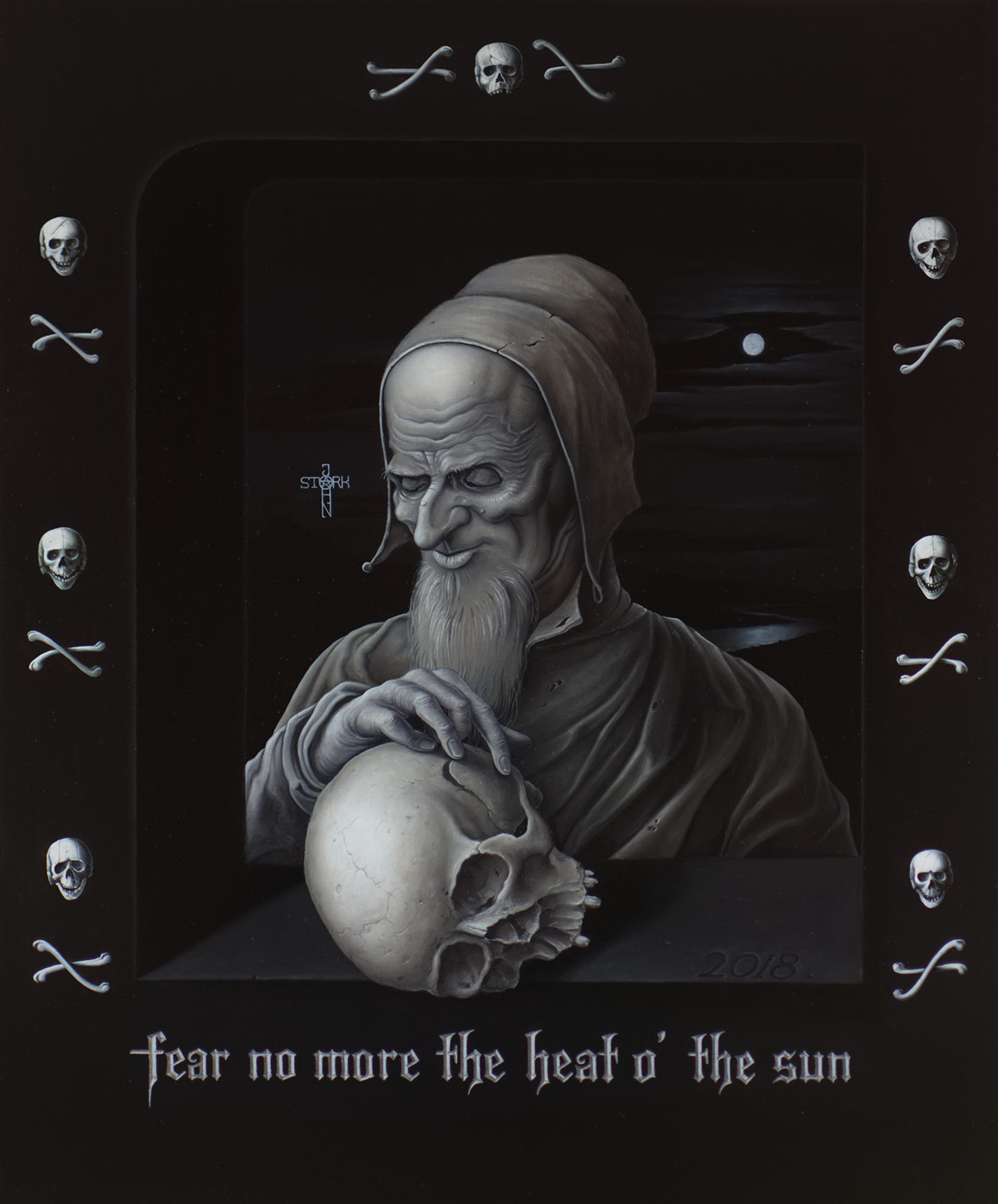 Your pieces are impressive, with great attention to detail. Oil paint is your preferred medium, and this type of paint is known for taking long periods of time to dry. How long does it generally take you to finish a piece, or at least understand the work no longer needs attention?
This can really vary. Some small paintings are made in one day – if it’s a good day. The largest works can take up to six months. Because I apply the oil paint incredibly thin it’s usually dry the next day, so I don’t have issues with drying time holding me back. I try to work on seven to eight paintings at one time, then a hierarchy emerges and the weaker ones tend to get destroyed. A lot of paintings get destroyed along the way and there are often several attempts at achieving one painting.
Your work is highly symbolic. Although this is personal according to each one’s interpretation, I’d like to know if it’s true that all your pieces are full of decipherable codes (for those who know or understand them), or if it’s purely aesthetic and has no mystic or secret connotations?
I think it would be difficult to make a work rooted in figuration that isn’t on some level symbolic. Three dots very quickly resemble a face. So I guess my paintings, much like a black mirror, tend to reflect back what the viewer brings to them. They are about an accumulation of knowledge throughout history – and not just exclusive to art. I also draw on knowledge from other areas such as anthropology and archaeology. An archaeologist will see a painting of a bone, for example, very differently from a car salesman. Whether that knowledge remains hidden or not lies in question.
In general, I work with a specific cast of idiosyncratic figures that could be seen as symbolic, such as the witch, the monk, the leper, and the beekeeper. Although these come with a lot of pre-programmed signification they can still mean different things to different people. You can’t really control that and I find it interesting how these specific characters and narratives remain open to interpretation.
Your DoL Po 2016 paintings took a 180-degree shift from your previous works: from witchcraft to astronauts. One piece in particular caught my eye: The Medium of Exchange. One part shows an astronaut’s glove hiding half of a coin with the inscription ‘Half moon in’, while the second is the same glove, only this time it is fully propping up the coin and the caption reads ‘Full moon out’. I suspect it is referencing government funds going into technological advances, but I could be wrong. Would you give us some context?
Yes, DoL Po was something a little different and more politically motivated than previous exhibitions. The ‘DoL’ in DoL Po stands for ‘Division of Labour’, and the painting Medium of Exchange is actually one of a few collaborative paintings I made with creative friends Rebecca and Mike. It actually started out as an idea for a pub sign and the paintings where exhibited back to back. We took the idea of a magic trick, and the idea of a glove – actually, a beekeepers glove, which renders the hand invisible. So it becomes a reference to Adam Smiths’ ‘invisible hand theory’, which invokes references to income distribution, economic growth, trade and exchange, or simply put, capitalism. You put a half in and you get a full coin back. This all flips back on itself as the coin simultaneously relates to the phases of the moon, which like the tide of the sea, we are all under its influence. 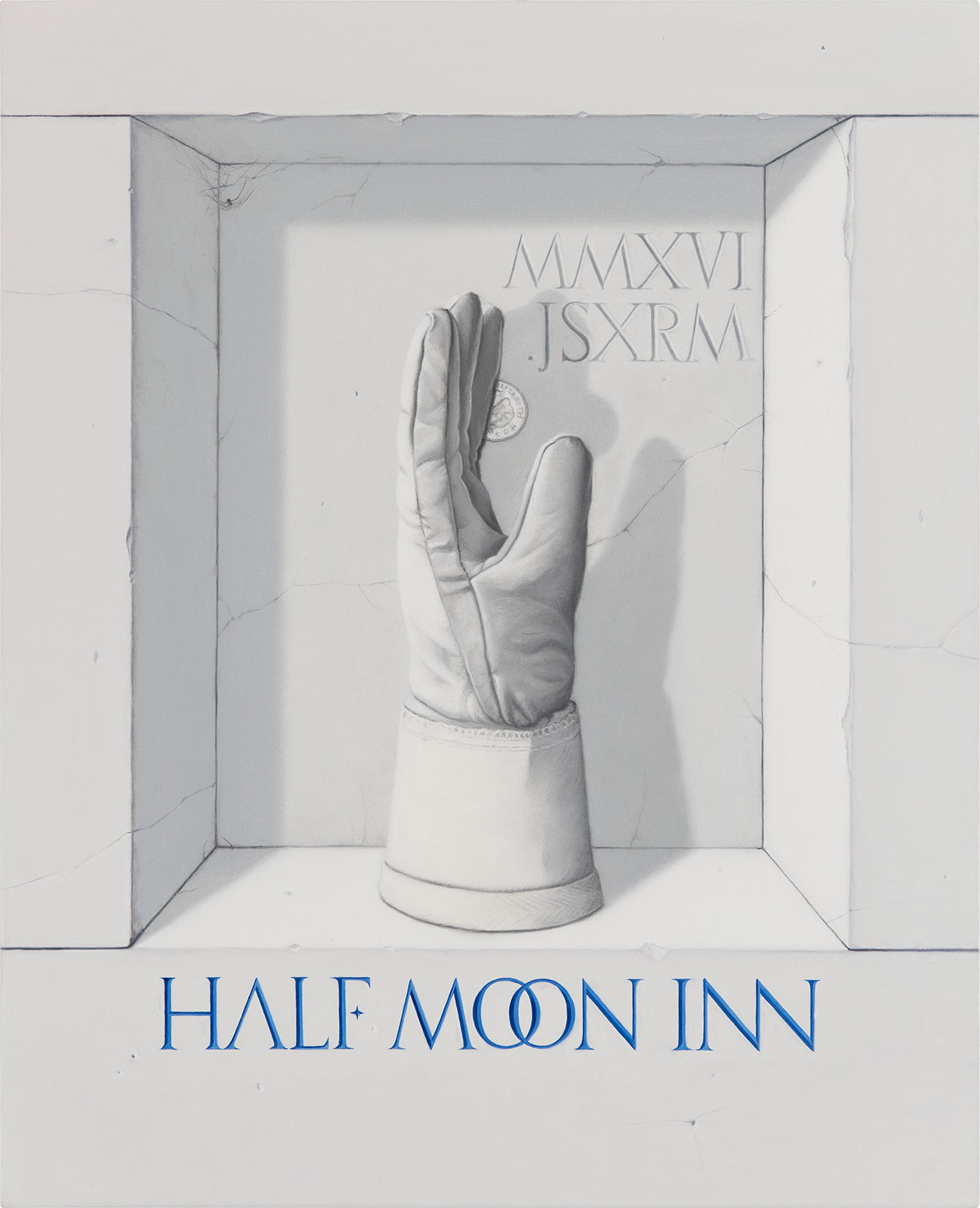 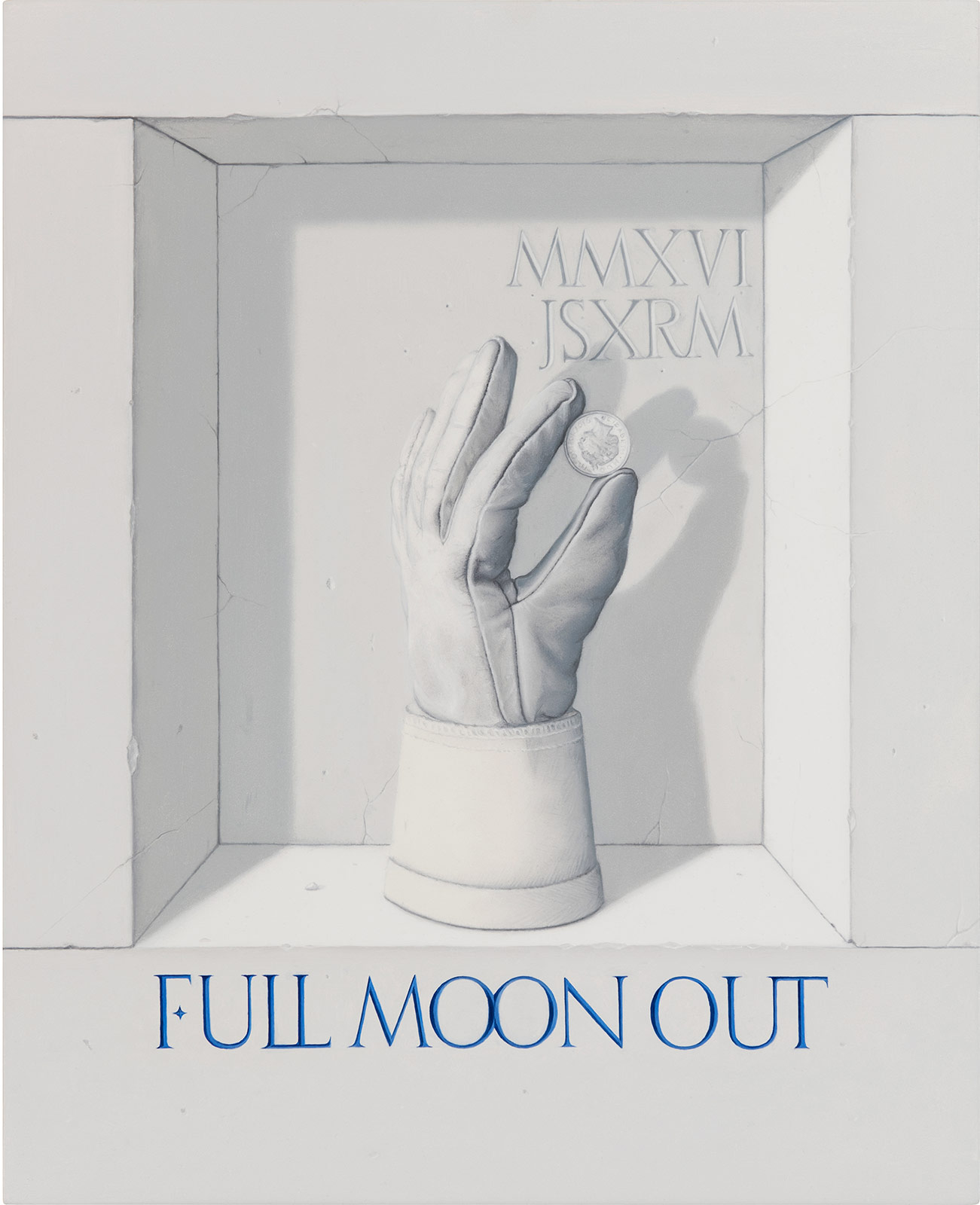 Your Alcove Paintings 2018 share the same frame: the shape of a medieval fortress window. It gives the aura as if the spectator is looking out through the window. What are you communicating with this element? Are we trapped somehow?
Paintings are like windows so the stone frame occurred quite naturally. It’s funny because by employing this very formal architectural element in the work, suddenly a door of endless possibilities opened. I was literally painting a brick wall, which suddenly seemed full of potential. I imagined there could be wolves in these walls, monsters behind them, etc. They can act as sites for still life or I can break through and turn them into windows onto other worlds. So rather than evoking the feeling of being trapped, to me, they actually operate in the opposite way by liberating the painted space.
In the Roman Catholic Church, the alcove is often the site of transubstantiation, where the bread and wine become the body and blood of Christ. Painting holds a similar transformative potential and, more recently, my concerns have shifted away from the image and more on the materiality of the paint and the object-hood of the painting.
Could you tell us an example?
The painting Leprae depicts an infected alcove. Here, the alcove references ‘leper’s squints’ or hagioscopes, which are small architectural devices in chapels that allowed lepers and other non-desirables to view the service from outside without coming into contact with the rest of the community. In Leprae, the alcove is blocked so they can’t see in, turning leprosy into the subject seen and to be exalted instead of it being hidden from sight. So an alcove, once the site of transubstantiation, now becomes like the skin of an ‘unclean’ unbeliever.
Could we say that the depiction of alternate realities is your primary focus, or do you intend on expanding your panorama any time soon?
I’m reducing things down at the moment, the paintings are becoming more minimal and blacker, which works really well with the highly varnished, mirror-like surface. There’s something about these darker works being on the limits of visibility that really interests me. From a distance, they can appear as black rectangles and, as you approach them, the images emerge and draw you in. With the black alcoves, it’s also unclear what material they are supposed to be made of; it feels like it could be oily rubber, space dust or some kind of dark matter.
What are you currently working on?
I’m currently working on a collaborative project with the musician James Lavelle, of Unkle, who I met at the Ngorongoro II exhibition in Berlin. And there’s a three-person show on the cards for next year. Other than that, it’s the usual run of art fair deadlines which keeps me busy. 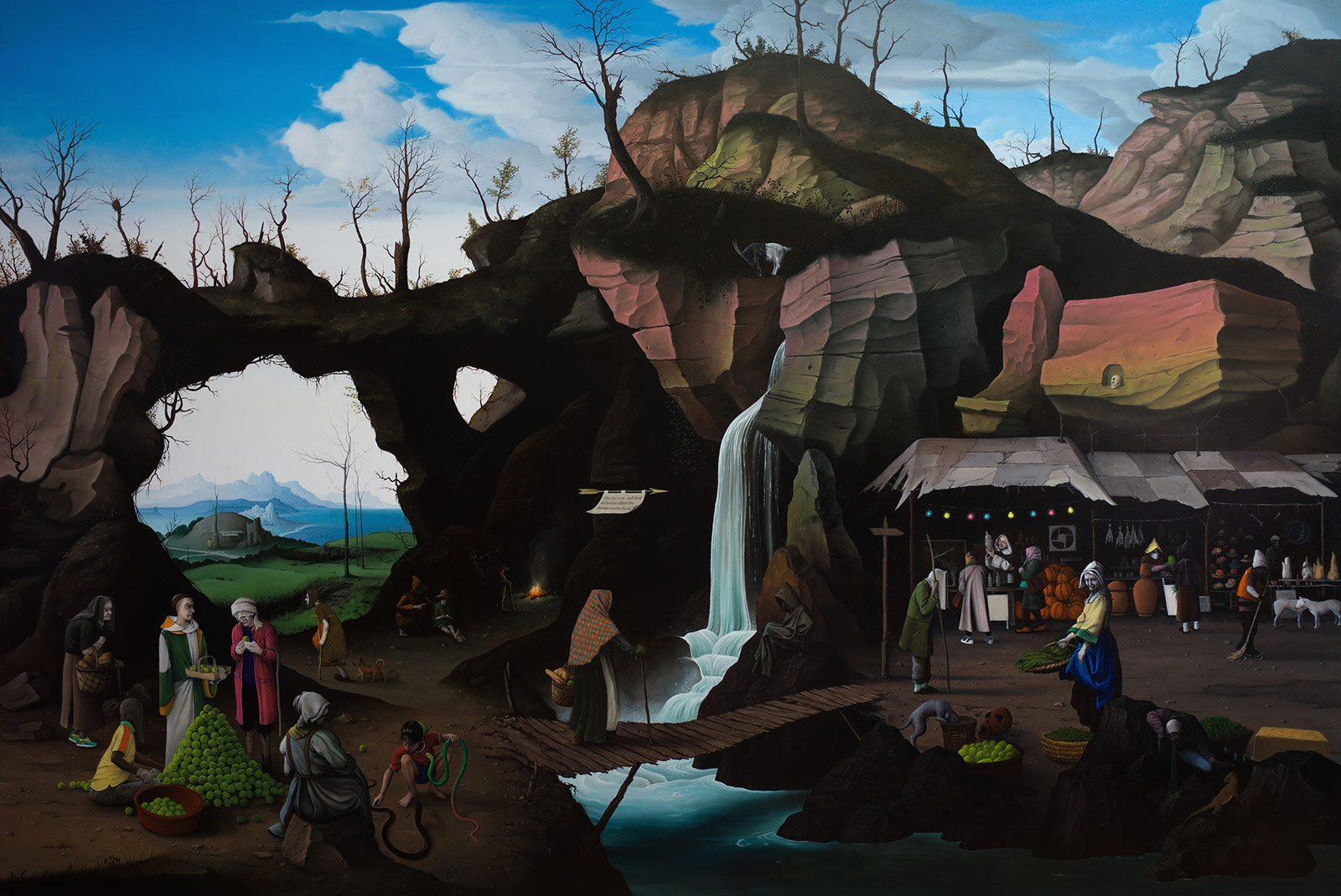 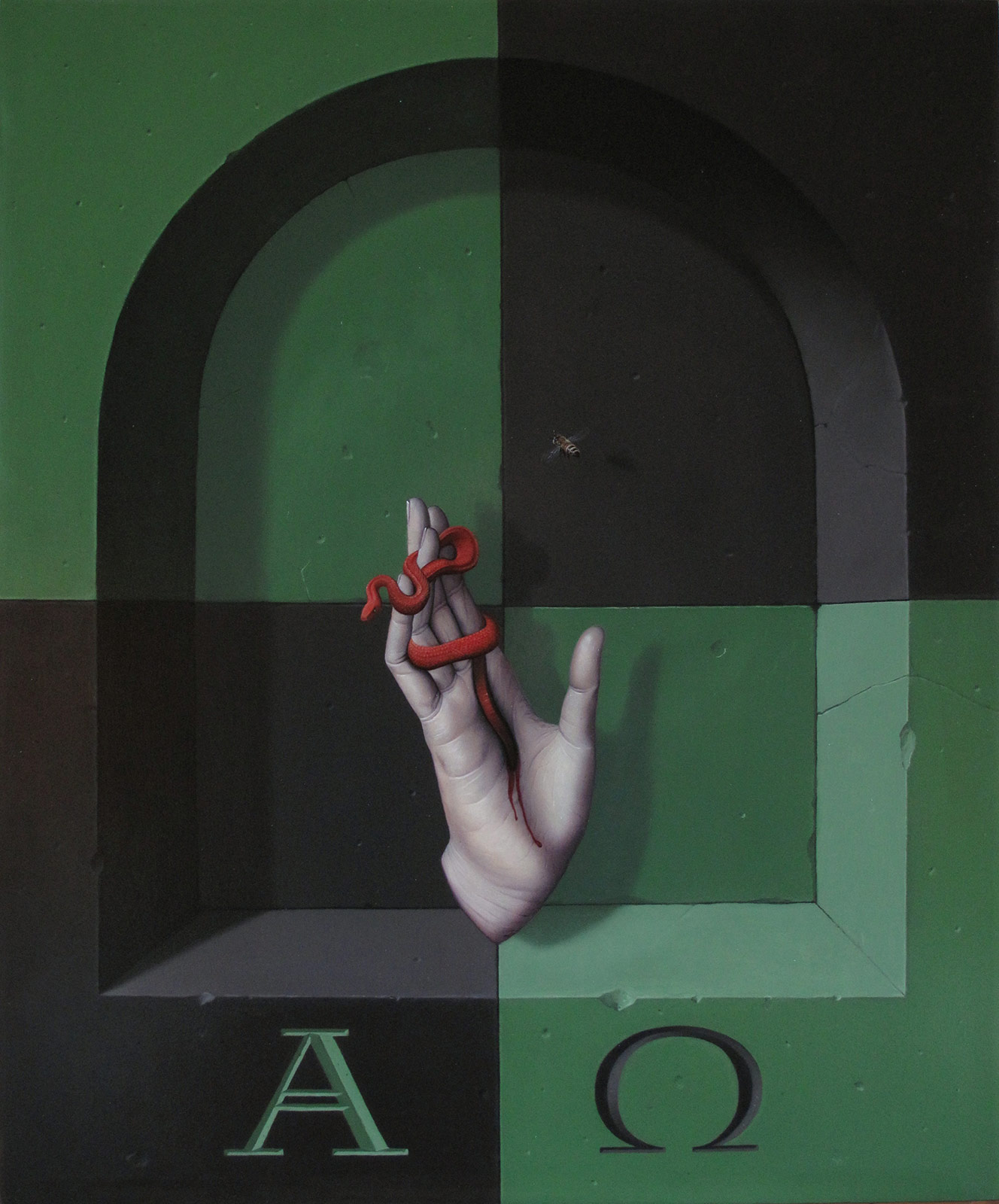 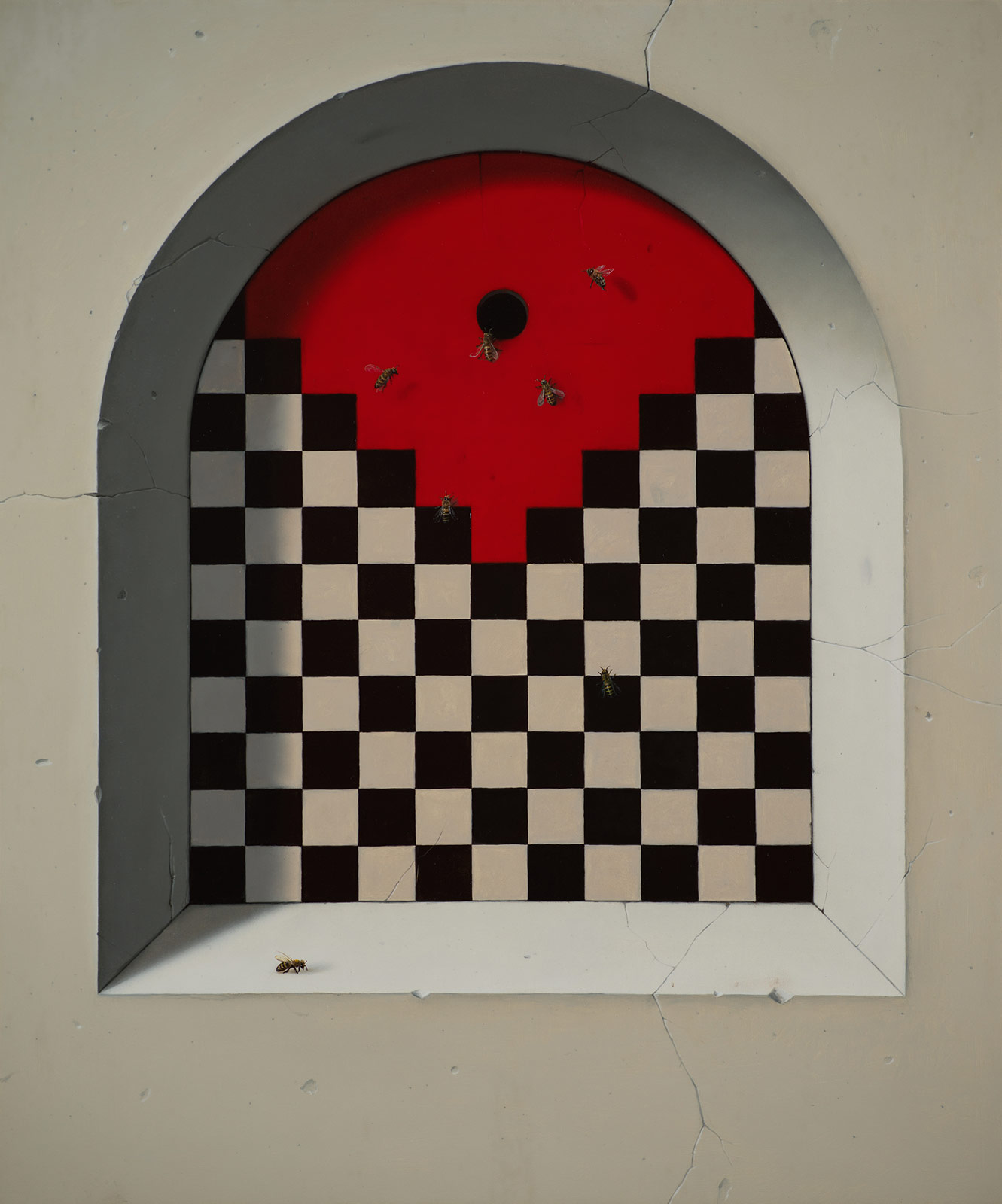 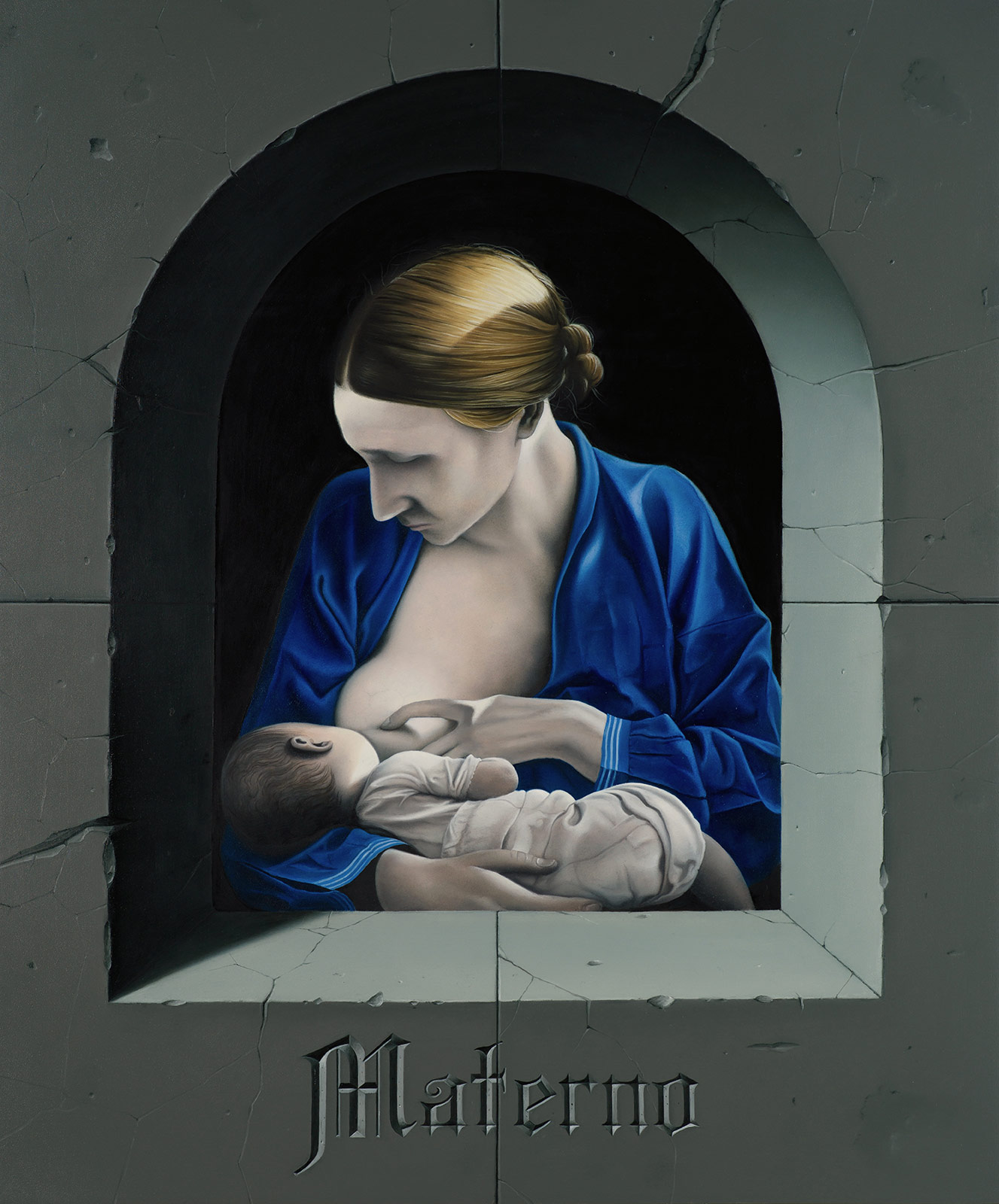 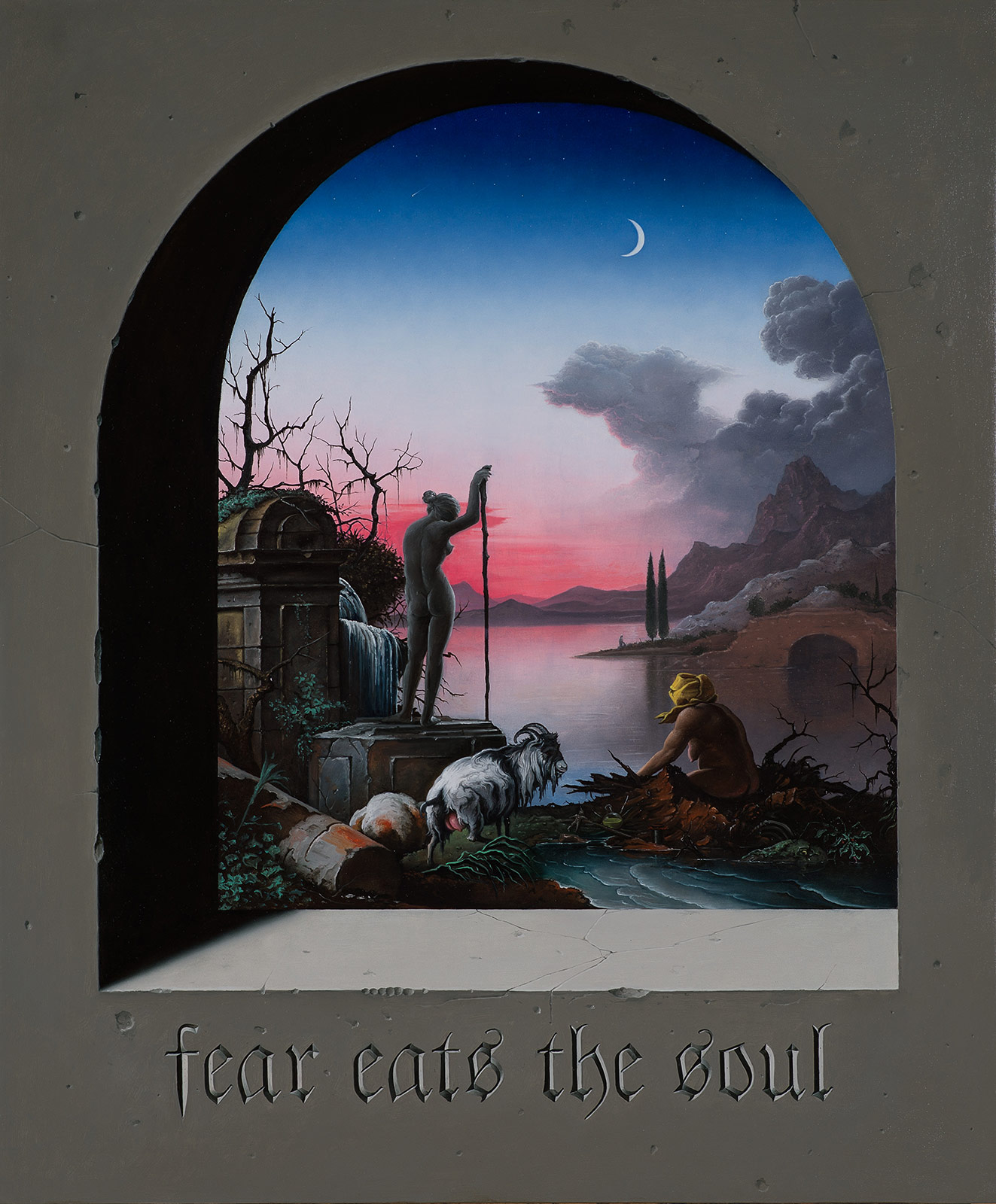 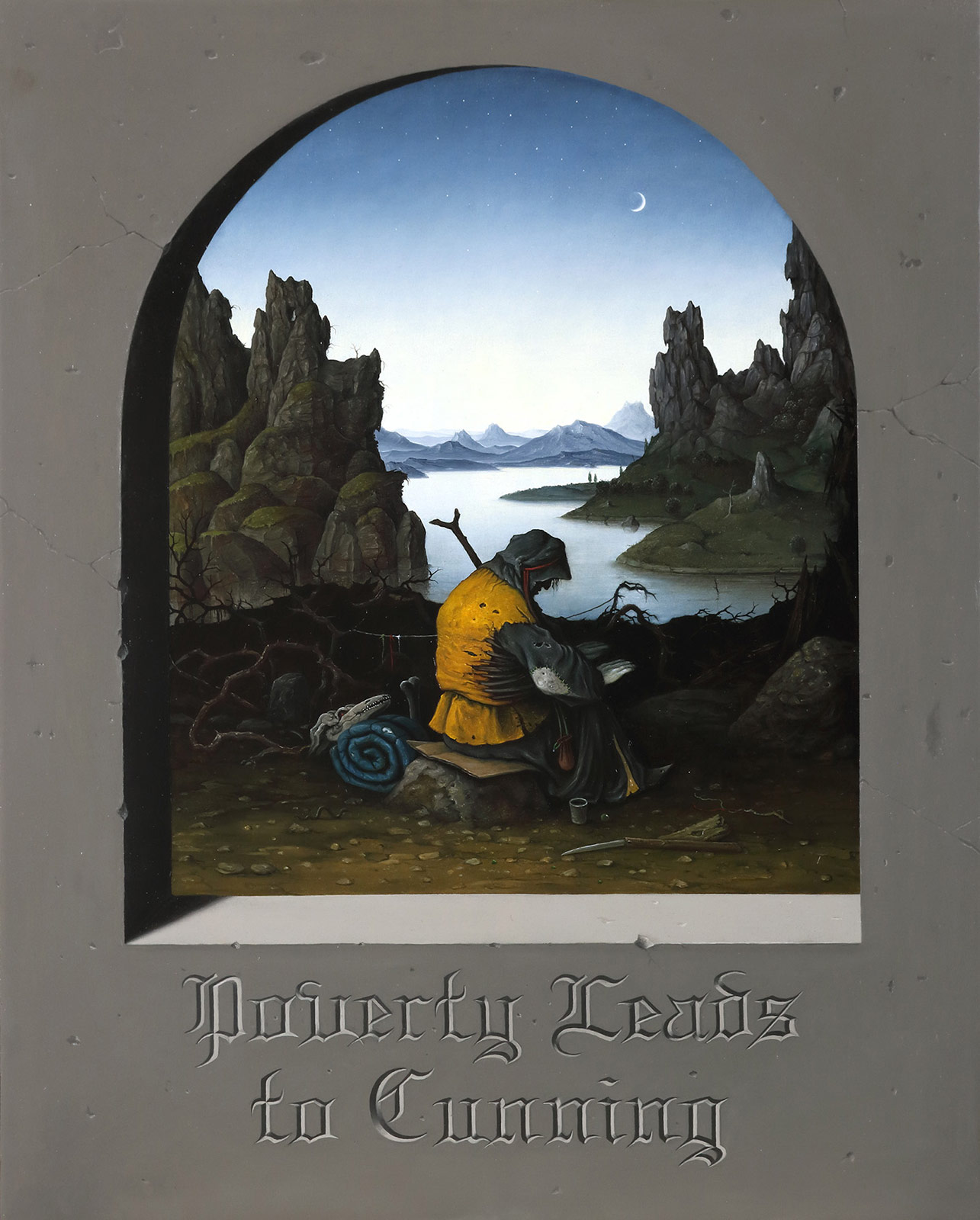 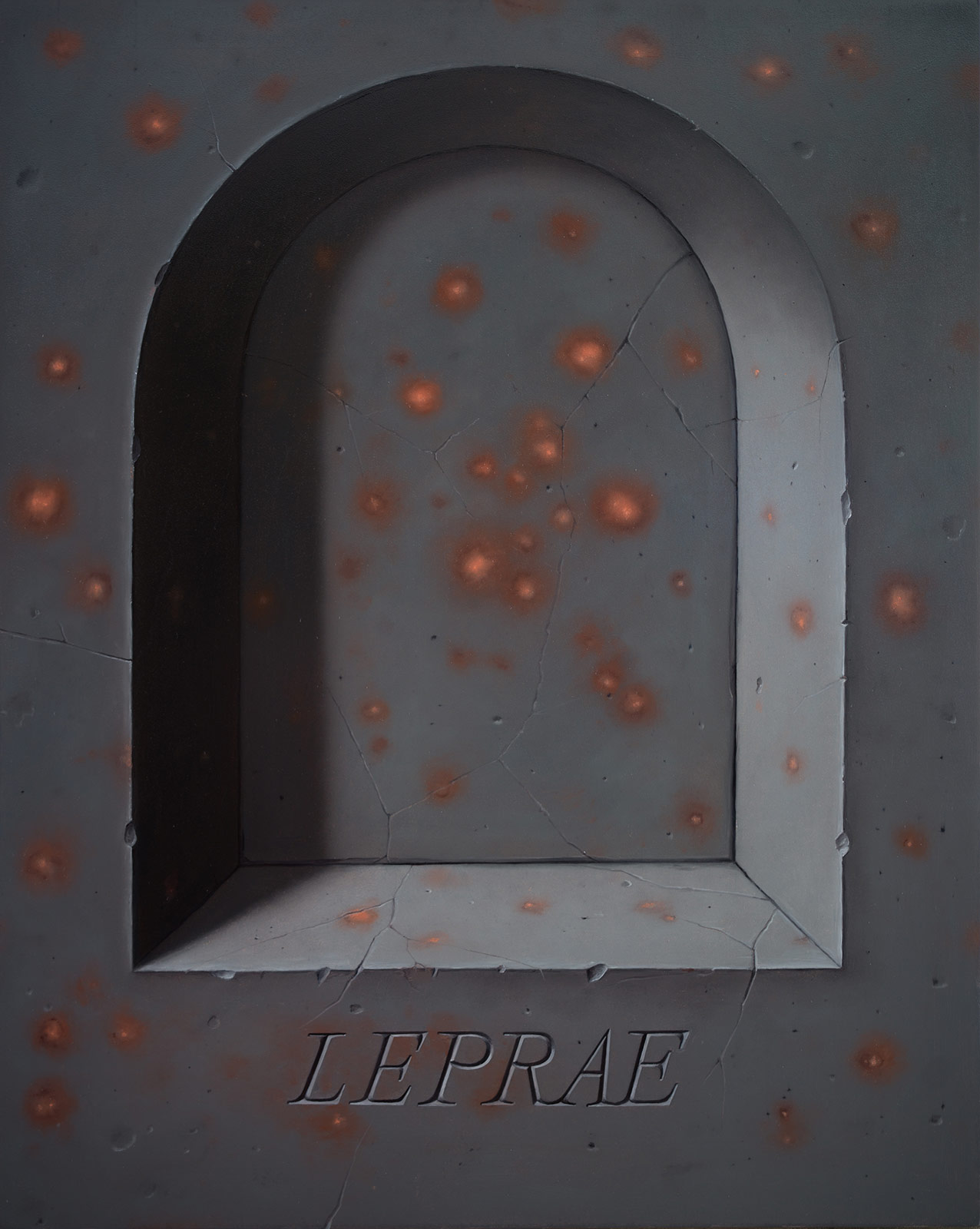