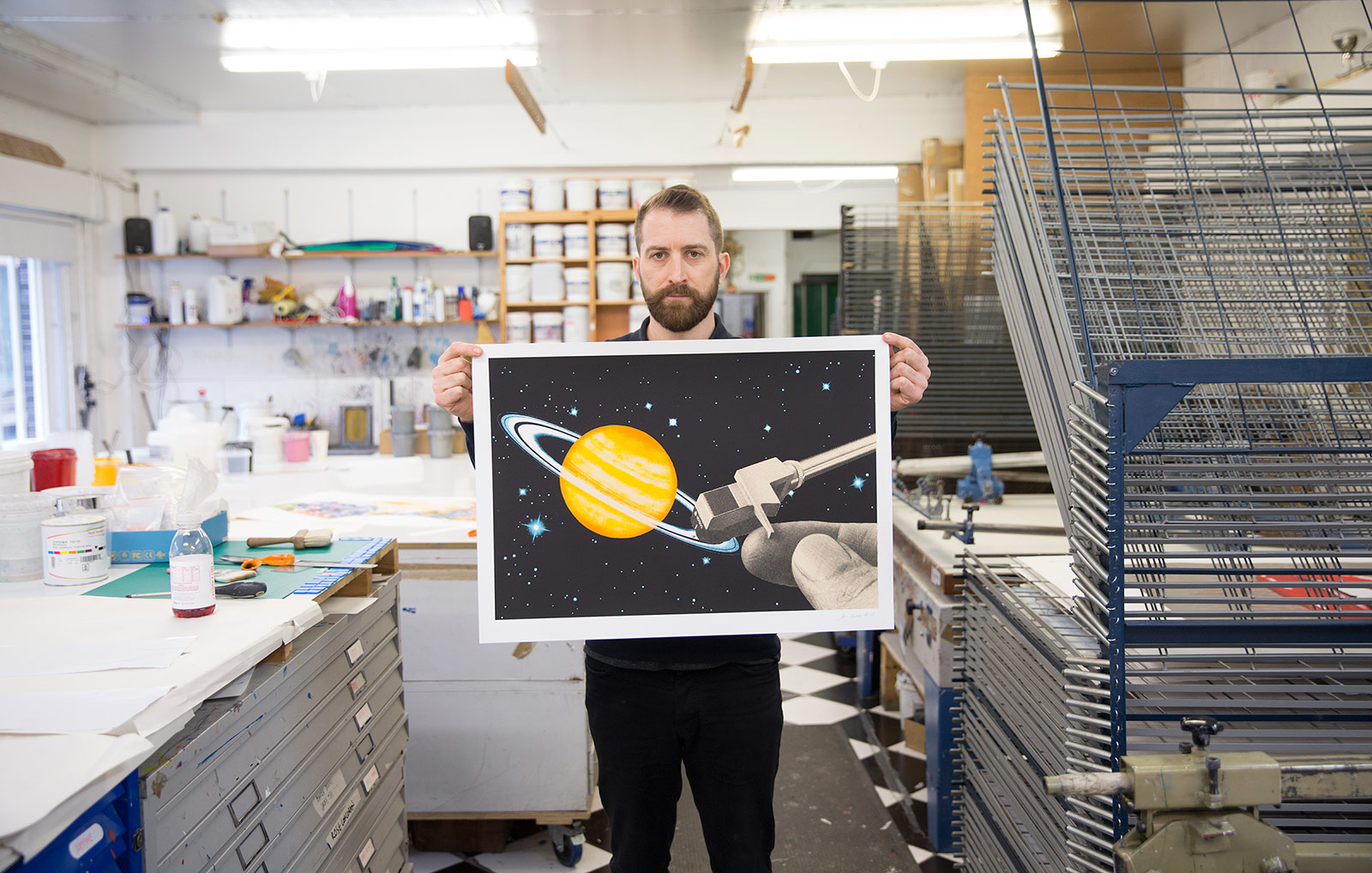 Each of his pieces transfigures a reality; each of his collages is an emotional and intellectual rampart to any fake news. Befuddled by some of the medias' agendas, people may forget that oppression, inequality, and exploitation of men by men have caused the problems that our societies are currently facing. Instead of denouncing these situations, British artist Joe Webb prefers to romanticise them through frozen smiles and retro pictures.
Mistakenly, some people may think that the old times were better because, back then, thoughts, attitudes, bodies, and personalities – in short, life – was completely codified and policed by family, social classes, and even religion. Today, those ‘zombie institutions’ tend to build up a society full of fears in which freedom is said to be for everyone. But here we are: so free, but at the same time so scared that we stand by the powerful people ruling the world and their mismanagement; settled here through conformity, bottle-feed with entertainment. In a world where eight men now control as much wealth as the world's poorest 3.6 billion people – according to Oxfam – someone like Joe Webb doesn't want to forget this fact. As an artist, he fills up his collages with yesteryear images to suggest that everything the system has been promising is only an illusion. 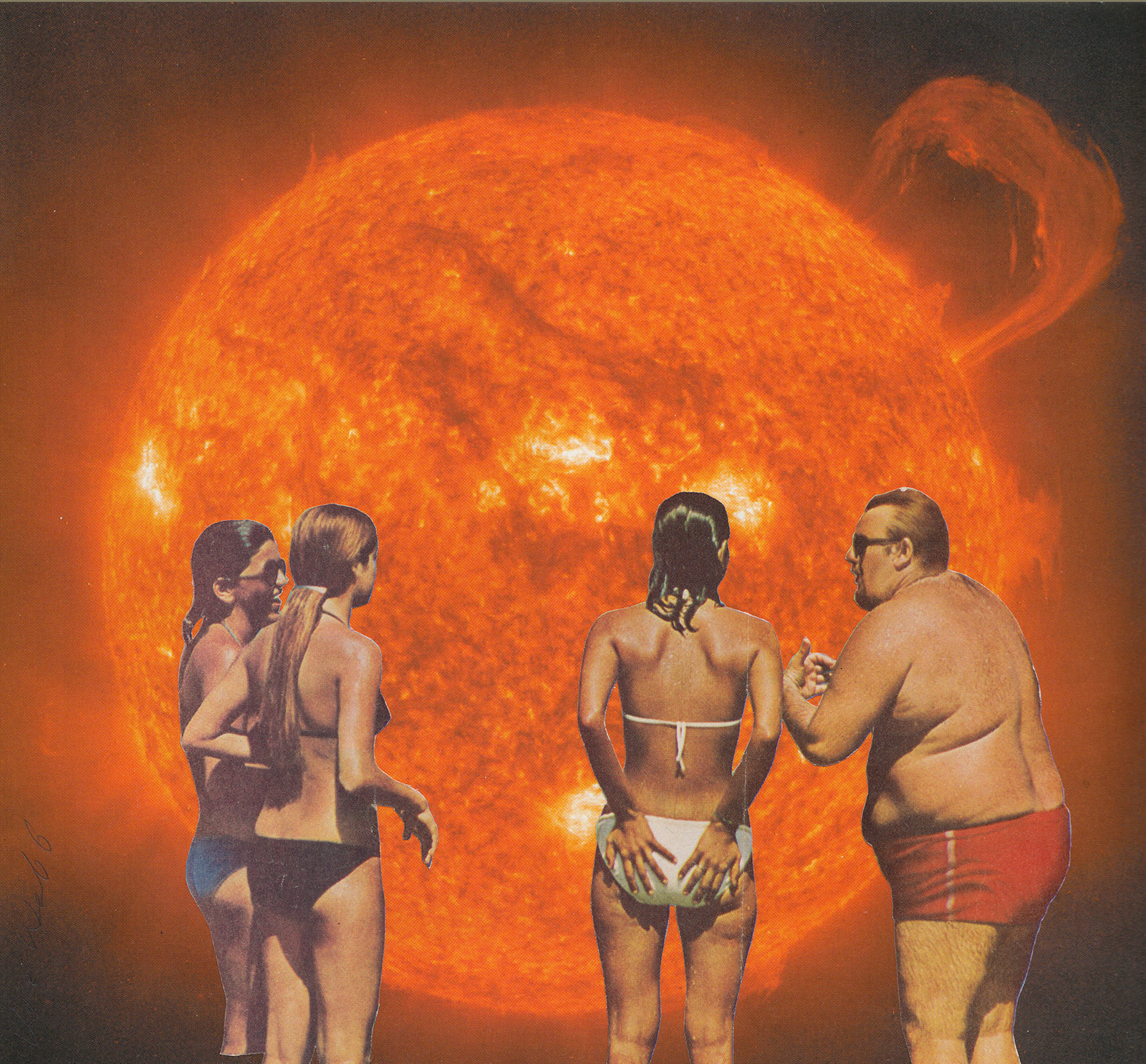 You once said you wished you were born a hundred years ago. When exactly? And why?
Yes, but that was more of a wish to live at a slower pace in a more simple time, without the addiction to smartphones and computers. A hundred years ago would actually be around the start of World War I, which was probably not the best time to be around.
Who/what do you consider your main influences? What do you find so fascinating in the work of Magritte?
I like the way the surrealist movement saw the world by exploring other realms of consciousness. There's so much our eyes don't perceive; for example, science has shown there's millions of waveforms in addition to the visible light. And Magritte and other surrealist painters demonstrated how there are other ways of reading reality, too.
Would you say then that you're composing artworks as a manifesto?
I'm just composing works to comment on the world we live in. Sometimes I do it by looking at the inequalities and the gap between the rich and the poor, the cutthroat corporate structure, or wars and famine. And other times, I do it by exploring beyond our world and looking at the mind-blowing vastness of outer space. 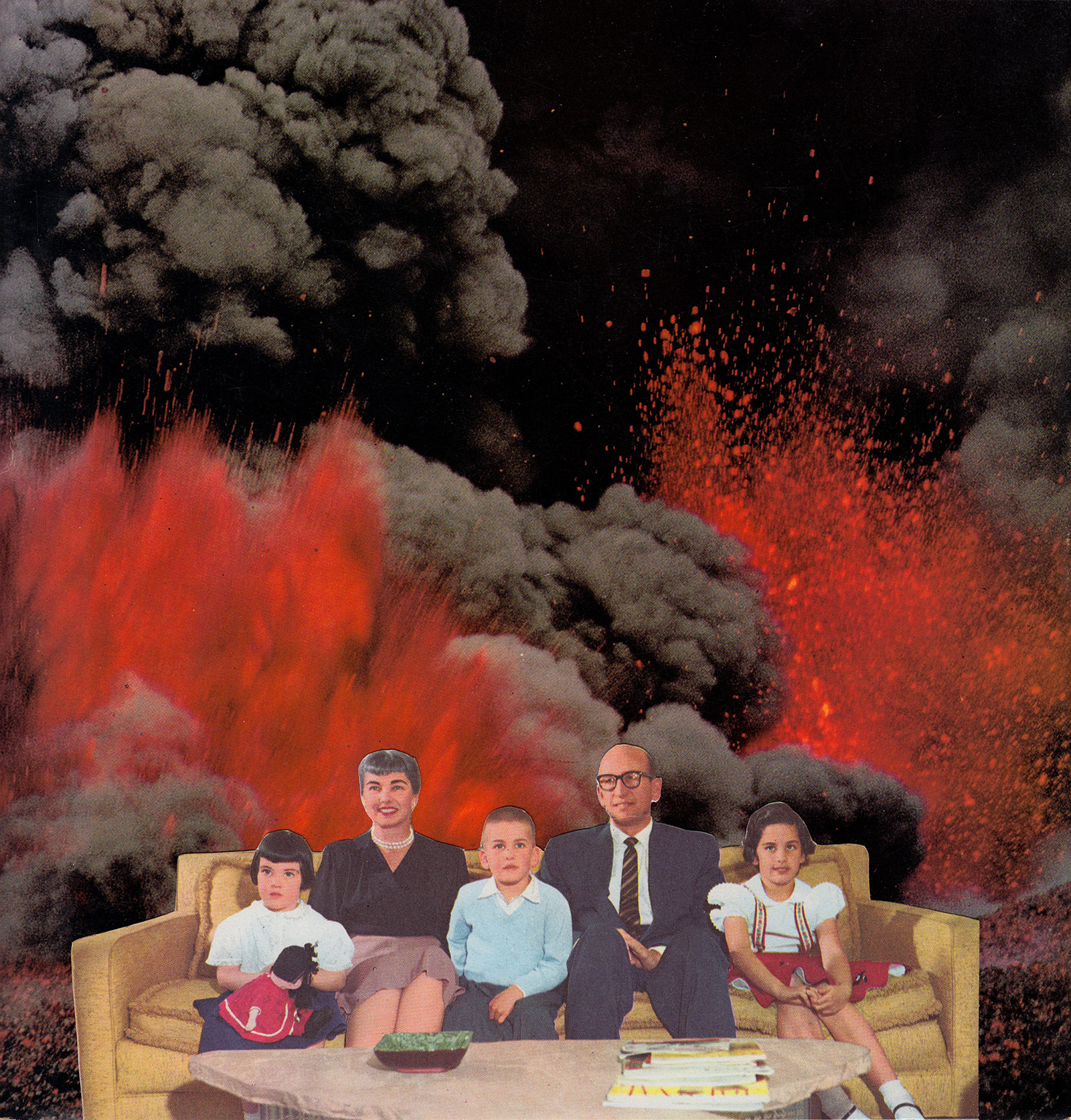 You’ve stated that your approach towards art is anti technologic. Where does this idea come from?
I worked for many years as a graphic designer, so I was glued to a computer screen. When I started making handmade collages as a reaction to this I found that, when trying to make them on the computer, they weren't as good. It's too easy to google images; it's much more of a challenge to look for an old book or magazine. There's a real sense of serendipity in finding the right images.
I'm curious to know in which kind of magazines do you find your little characters or the settings you use. Are they lifestyle magazines? Or fashion ones? Gardening magazines, maybe?
All these kinds of magazines, actually. Lifestyle magazines sell us images of unattainable perfect lifestyles, which are great for parody. I also work with newspapers I find left behind on the train. It goes back to that feeling of serendipity: finding images by accident.
How do you get informed regarding the current world affairs?
Mostly online; I avoid mainstream newspapers, which are basically propaganda. 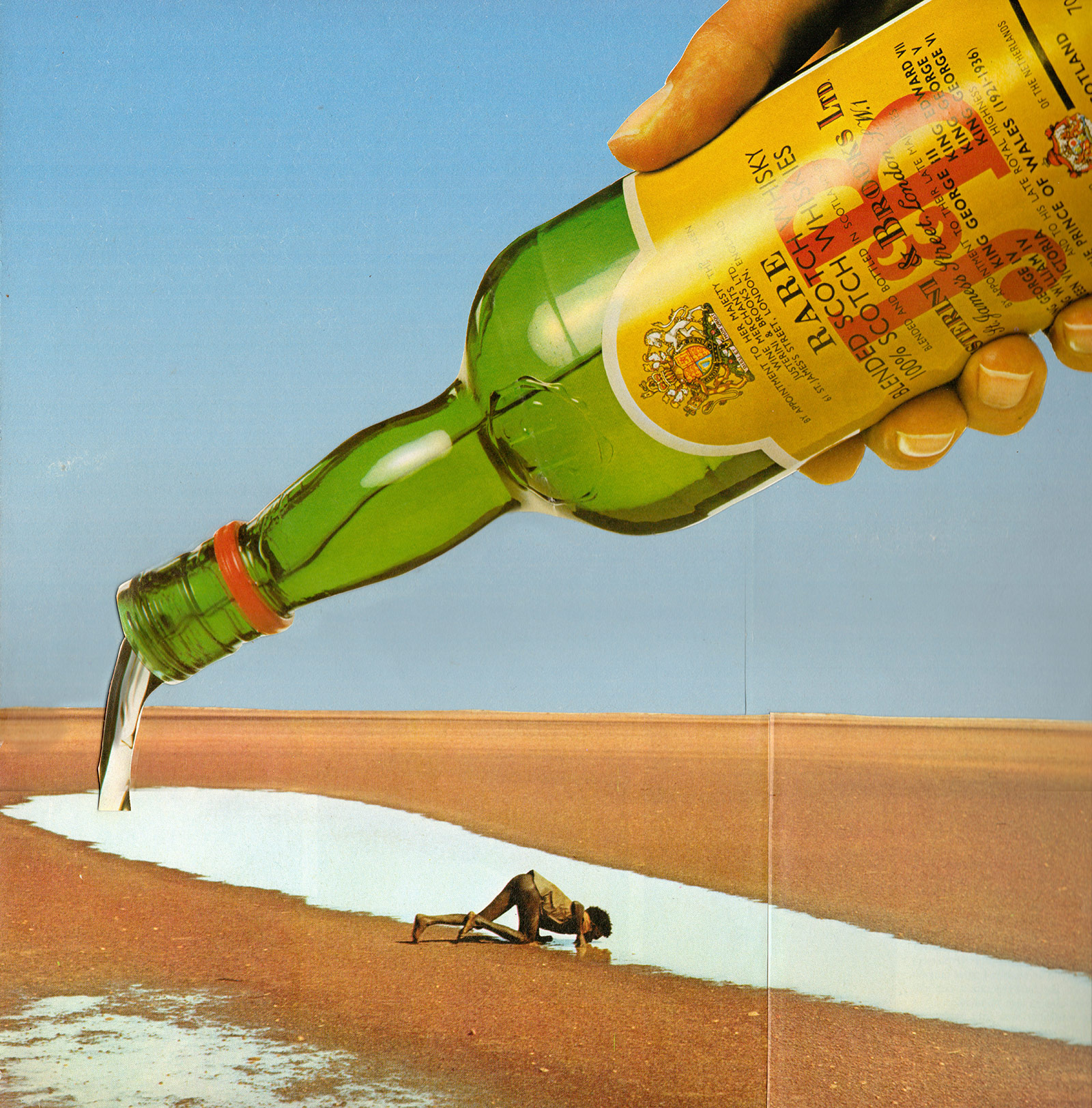 “Global warming, consumerism, war, drought, famine, etc. It seems half the world is killing each other while the other half are watching singing competitions on TV, which I find an odd juxtaposition. My artwork is just my way of mirroring this.” Some of your reflexions are harsh truth! Like the photo where we saw a Johnny Walker whisky bottle spilled out in a puddle, and aborigines quenching their thirst in it. This one is insanely true. I mean the consequences of alcohol on the Australian aborigines are disastrous and we do not hear that much about it. The prime minister even named it once “the alcohol rivers”. Do you believe art is meant to say something on those hidden realities that do not fit into traditional agendas? Most artists have not been that engaged for decades.
Yes, that piece was a direct statement on how the aboriginal culture has been almost totally destroyed by the settlers there (and also everywhere else the British Empire invaded). For me the role of an artist is to tackle the subjects of the world we live in. Not to be influenced by what's happening around us seems amazing to me. But I can't speak for what other artists should be doing. If others prefer to make pretty pictures that match people’s sofas, that's up to them.
Fashion is also a recurrent theme for you: you often put in perspective the over exaggerated posture of models within a context that suits perfectly: zebras, desolation, beast of burden, etc. How do you understand fashion as something to denounce?
Fashion can be great for individual expression and creativity. What is wrong about it is the adverting they impose on us by projecting images of perfect people, usually white, thin and flawless. Inevitably, this makes people who look at these glossy ads feel totally inadequate. It manipulates them to become insecure and end up consuming these products to feel better. Not to mention the sweatshops where the garments are made.
I found there is something comforting about vintage (like those ecstatic smile, notably). But the modern juxtaposition you've made is horrifying, touching, even tearful. How do you explain this mise-en-perspective works so well? You've also said: “In my work I explore ghosts and missing people, mirror the fact that these people are mostly gone now.” Do you think that the dream of a peaceful and better world is gone, too?
Vintage imagery has this nostalgic feeling that, when paired with disparate imagery, takes on a new meaning. I do dream of a peaceful world (as most people do); but as long as we live in an society whose economy depends on selling weapons and other war-related items, achieving global peace is going to be a huge task. 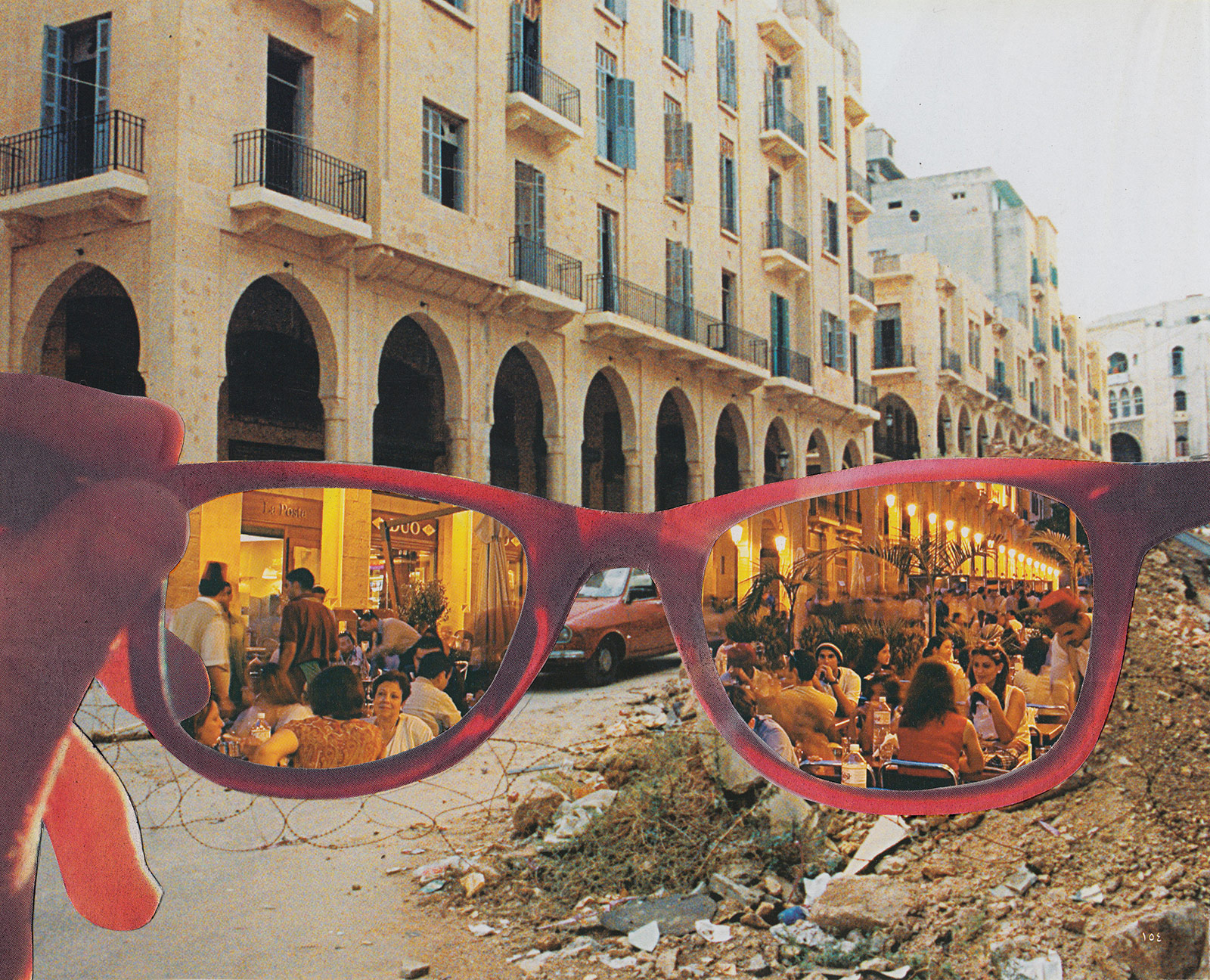 How do you try to keep your artwork as readable as possible? What do you expect from the viewer? A reaction? An understanding?
I want people to decipher the work relatively easily, but I also want it to work on different levels. At first glance you see a cool retro picture; but then, it's inviting the viewer to look more deeply at the messages inside. And hopefully, it will make the viewer do some research on the subject.
You once said that it was immaturity that led your way to become an artist. Do you think we need to be childish, even immature to be able to correctly view the world?
Picasso said that we are all born artists; if we can continue playing, then this never leaves us. It's a constant fight against society's mainstream programming to act grown-up and become an estate agent (or whatever). There's a big effort by the government to close down and weaken the right side of the brain – where creative thinking is found – by cutting the GCSE's (General Certificate of Secondary Education) and the funding of the arts, and by favouring ‘logically-thinking left-brain subjects’. This way, we leave school and become good, obedient, working taxpayers.
Last but not least, do you have any exhibition coming up soon?
I'm working in my studio on larger scale paintings and silkscreens with the aim of showing them at an exhibition in central London next year. Also, Jealous Gallery is displaying my work at most of the major art fairs this year, and will show some pieces at Turner Barnes Gallery (Essex) sometime later this year, too. Busy! 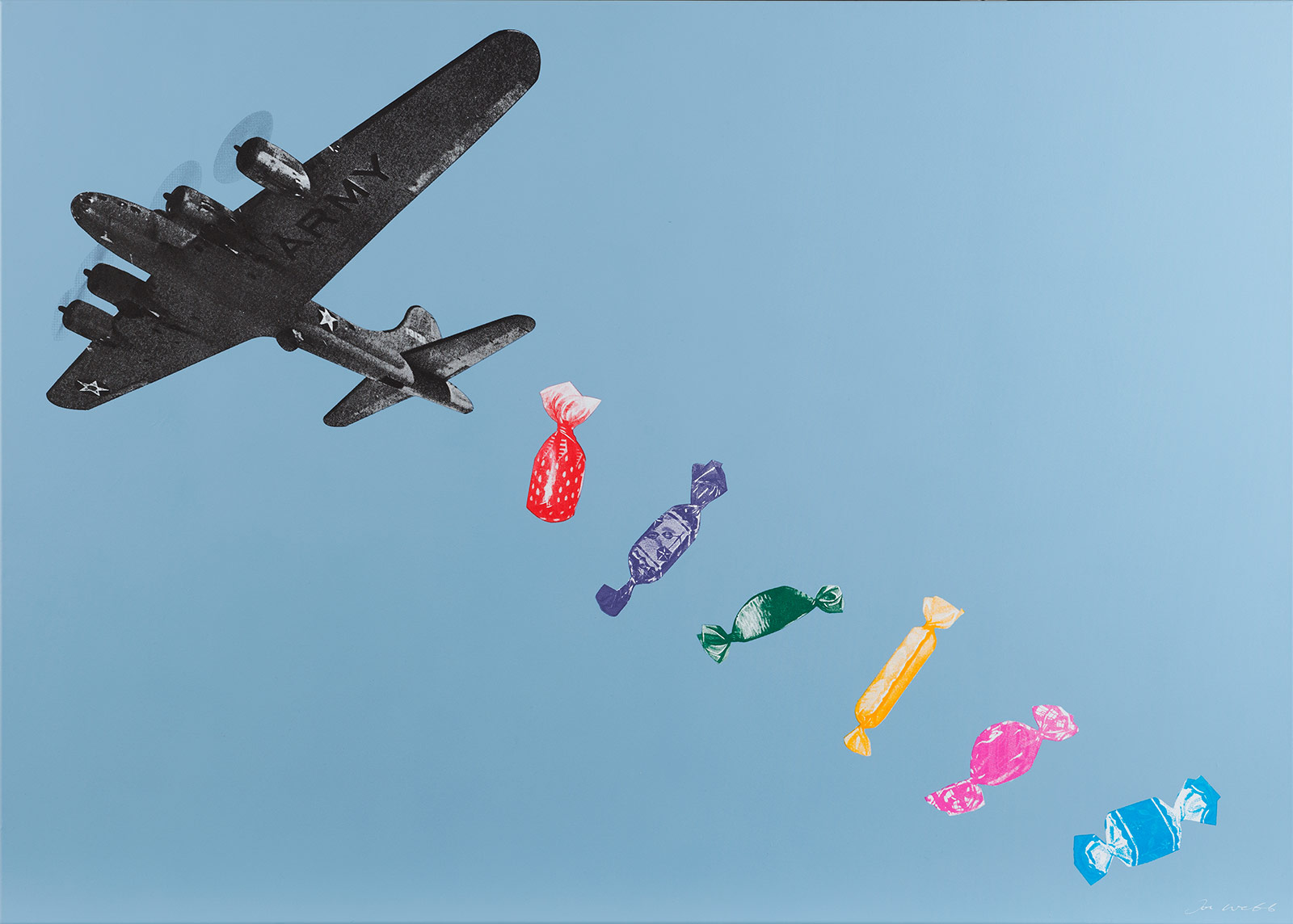 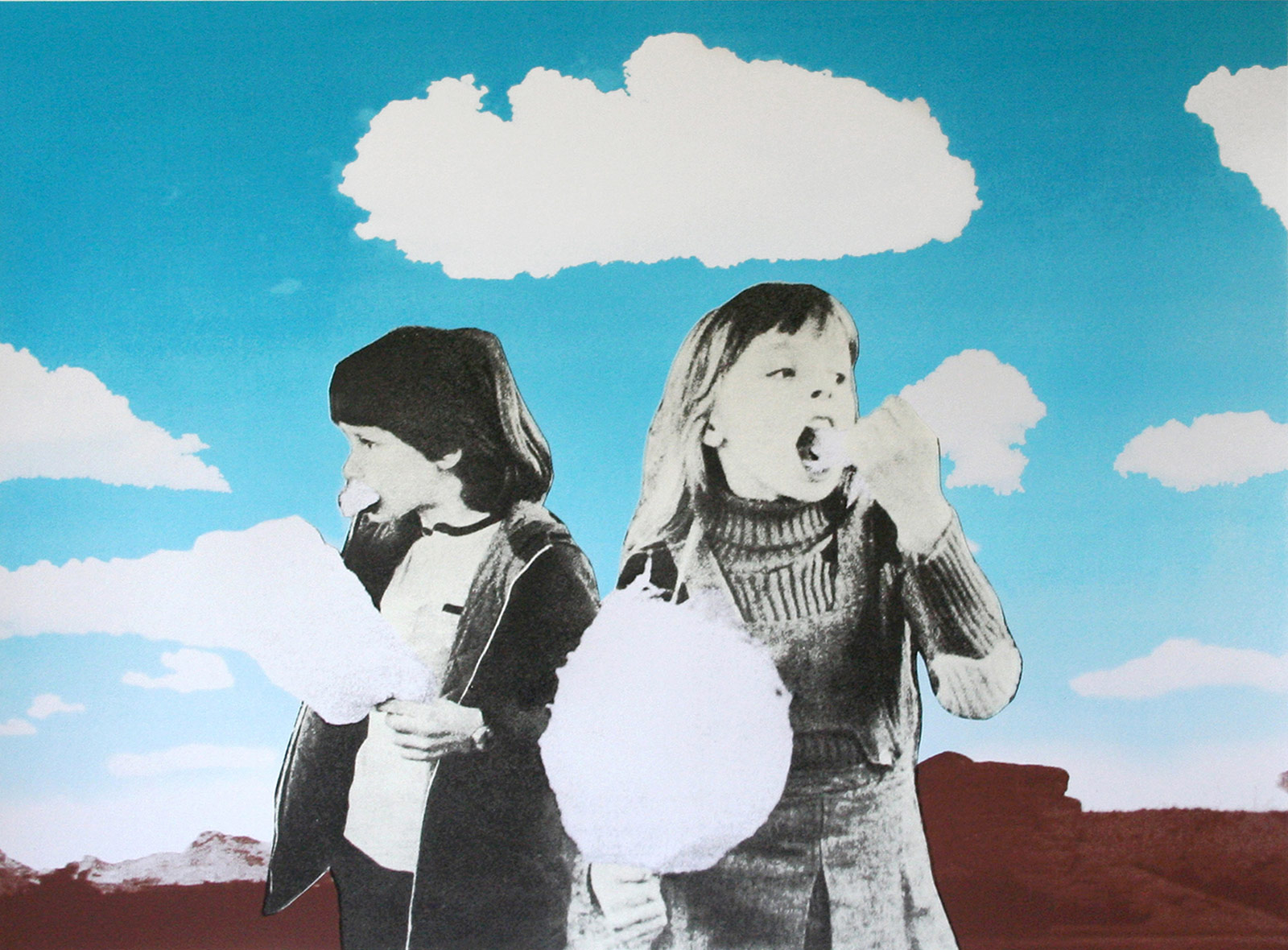 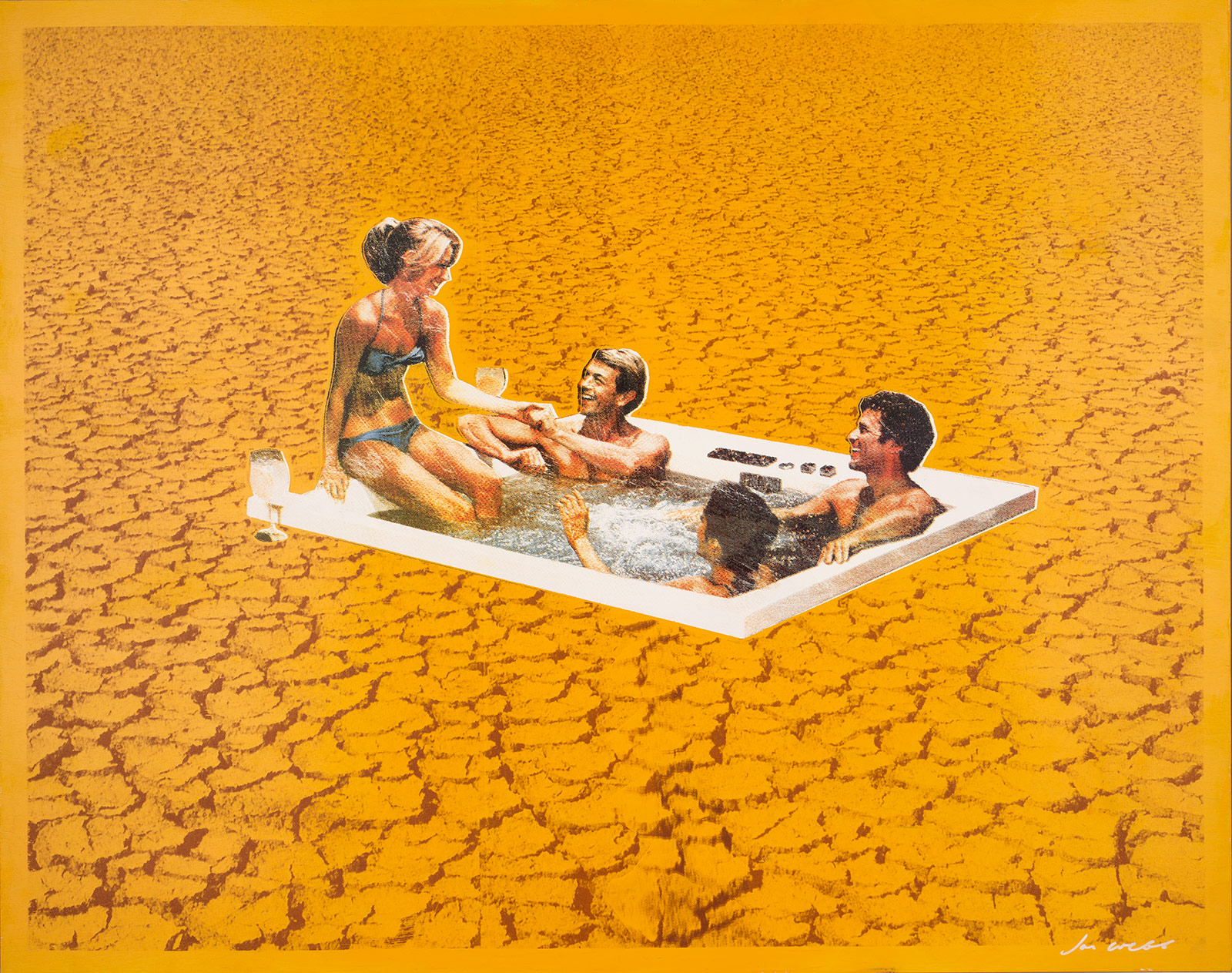