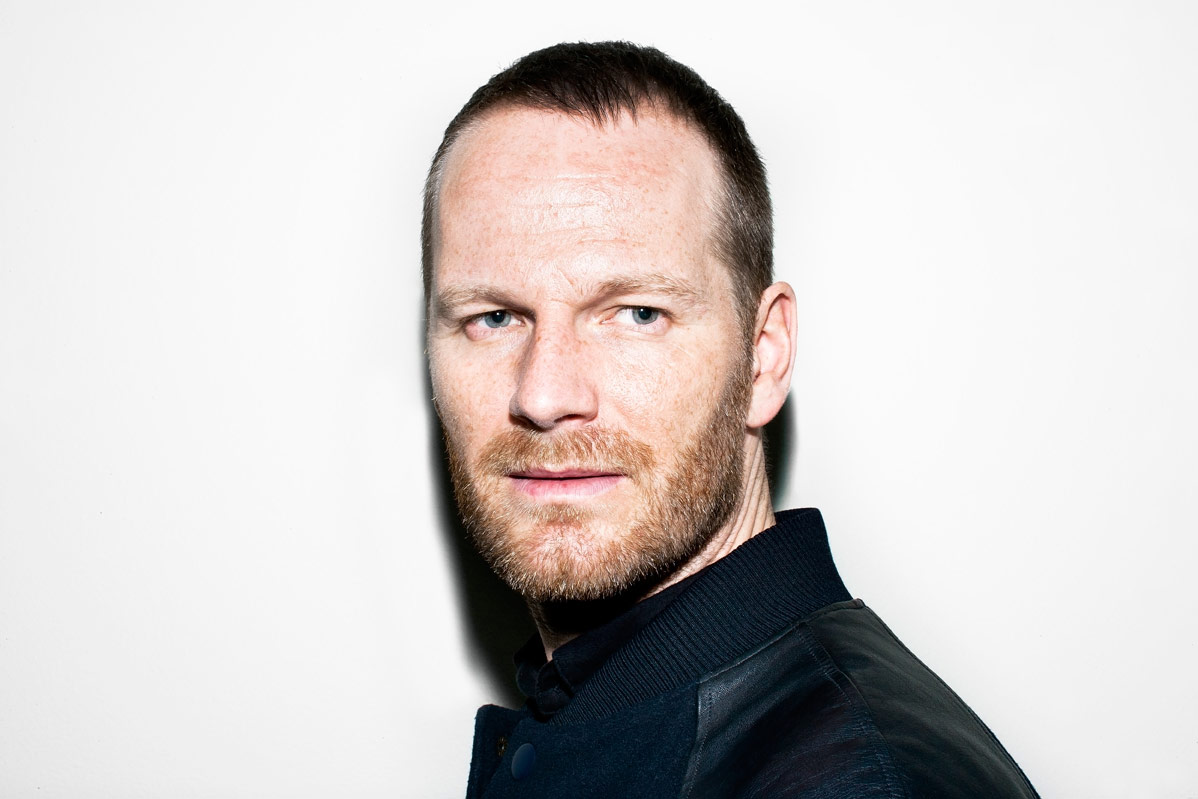 Joachim Trier is a young film director, but despite his age, he’s one of the most interesting you can find in Scandinavia nowadays. He actually comes from a filmmaking family background – his grandfather is a well-known Norwegian film director from the 60s and 70s, and his parents have worked on film production as well, thus film sets have been a pretty familiar environment to him from a young age. His first movie, Reprise (2006), was bought by Miramax and became sort of a cult film in North America. Then came Oslo, August 31st (2011), which was screened at Cannes, acquiring praise and international recognition. We caught up during the Stockholm Film Festival, where he presented Louder Than Bombs (2015) –his third film and first one in English,– the day before he won the Bronze Horse for Best Film. Congratulations, Joachim!

Joachim used to be a professional skateboarder, competing on several championships in North America during his teen years, thus he started out filming experimental skate videos. Before starting to make fiction movies, he moved to London to attend the National Film and Television School. His career began once he moved back to Norway.

Louder Then Bombs was filmed in New York, and its Hollywood-ish cast achieves an interesting balance between heavy weighs from the industry, like Isabelle Huppert and Gabriel Byrne, and some popular new faces such as Jesse Eisenberg and Amy Ryan.

How did the experience in London, attending the NFTS, influence your career?

It was great, because we were only six people going to the directing line. It was kind of a miracle that I got in there, with thousands of people applying. I was just 23, but I was very eager to do films. They have great teachers like Stephen Frears, I remember having a workshop with Mike Lee, Robert Altman came by as well… Coming from Norway, that was a big deal. They were very focused on working with actors and casting. I used to be more of a visual/conceptual person, learning from directors such as (Michelangelo) Antonioni, Brian De Palma or (Martin) Scorsese. So at NFTS I learned a lot about acting and characters. The paradox is my movies are very character-driven as well as formally more experimental. In a strange way, NFTS got me interested in human stories.

Many extraordinary film directors, like Stanley Kubrick, Quentin Tarantino, Steven Spielberg or Wes Anderson, were self-taught. For those who are about to get into filmmaking, what would you advise regarding choosing one direction or another?

That’s a good question. First of all, watch movies and know cinema’s history. All the great directors that I’ve met in my journey as a filmmaker are very curious about cinema in terms of what kind of film it can be, where it comes from… Then comes the shooting process. If you want to be a director, today it’s really easy to shoot, but the nice thing about film schools is you learn to use the machine of the bigger equipment to do the other most important thing: team work. Never make movies alone! That’s key for me, the collaboration. I always wanted to be in a band, but now I have my band when I make movies; I have my cinematographer, editor, co-writer, we are a group working together. I need them, I can’t do anything alone. You can do that either in film school or out of film school, but train with the group.

I was confused when I read you are Norwegian; I was like, “Trier… isn’t that Danish?”

I was born in Denmark and raised in Norway. I’m half Danish, half Norwegian.

I know your surname is Danish because of Lars von Trier, of course…

My father is Danish and is somehow related to his family tree far out. But we are not in contact with each other (laughs).

I remember there was sort of a trend between the late 80s and early 90s – skateboarding magazines giving away VHS videos.

Yeah, I did those in VHS. They were shot in different formats, cut together, put some fun music and sold like bootlegs. I’d be giving them to friends, and people would spread them by copying them, so a friend of mine told me he had a VHS copy whose image you couldn’t almost can’t see, because it was the 3rd generation (laughs).

Do you currently reside in Oslo?

Yes, I do, but I have spent a lot of time in New York in the last three years. I’ve been in London and Paris as well, but yeah, New York and Oslo are where I’m based.

Do you know Emil Nikolaisen, a great musician living in Oslo?

Do you know him? I used Serena Maneesh’s music in my first film, Reprise, there is a song they did together. Emil is very sweet. You know, when I was growing up many of my friends had bands, I come from a music background as well, so I know Emil, he is part of the scene.

I know, he is great. So, I understand you started out with a bigger success in the U.S with your first film, and then with “Oslo, August 31st” you achieved a bigger audience in Europe.

To put it like this, Reprise was bought by Miramax in the U.S and then distributed in many other places in the world. I was kind of shocked. Then came Oslo, which was screened in Cannes and that’s why it became popular in Europe.

What have turned out easier or harder in this first phase of your career as a filmmaker?

The energy of Reprise is that I was so naïve… I thought I could manage everything. I’ve always been fighting my causes. I think I had a good team around, but what I really learned is not to be shy at showing myself in films. I thought I had to be more perfectionist, and now I embrace the fact that I can be more chaotic, to reveal yourself is a good thing. It doesn’t mean that I need to talk about my private life, but through my films I can express personal thoughts. Nothing to be scared of!

What kind of topics are you talking about?

Issues such as identity, confusion, ambition, friendship. That was important for me at the time. Now that’s something I’m not ashamed of, it is something I stand by. Even if now I make a big film like Louder Than Bombs in the U.S, I still need to do it from the personal script that we wrote, something that I cared about earlier in my life. It is not someone hiring famous actors to make a genre movie. It is personal cinema.

Louder Than Bombs finds the balance between known actors with a wealthy career and up-and-coming ones. Was it a change or challenge for you to work with this kind of people?

Yes and no. In a way yes, because they are the actors in the world I admire the most (laughs), while in “Reprise” we found people who had never acted before. In Bombs, in the beginning, working with such cast felt a bit different, and I was grateful they could join me – they all are very generous people, very kind and professional.

So they were people easy to work with.

Yeah, they gave me rehearsal time, so we could do rehearsals before we shot, which is quite unusual in the States. We were happy to have this opportunity, it was actually pretty cool. I was there with my camera guy, Swedish cinematographer Jakob Ihre, and we were like, “this is the same, we are like home,” because as a director you create the mood around the camera, that is my job. My art is to create a place, create the components, cinematography, actors, and art direction too, to work together. It didn’t feel so different after all, surprisingly.

How did you select the cast?

I had met most of the actors before. For instance, I met Isabelle Huppert here in Stockholm at the Film Festival, she liked Oslo and wanted to do a project together. I was very honoured, she’s fantastic. In the case of Gabriel (Byrne) and Jesse (Eisenberg), we went after them.

You work together with Skil Vogt. Please explain me briefly this collaboration.

Yeah, he is my co-writer. We do everything together. Sometimes he writes what we’ve decided, sometimes he sends it to me and I change it a bit and we keep sending it back and forth – but most of the time we just sit in the same room. It is a real collaboration; we’ve been friends for twenty years. I met him when I stopped skating, so he is my film friend, you know? (Laughs).

We know the concept of identity is important for you, but what would you say is Louder Than Bombs about?

It is about family relations in the aftermath of the tragedy. Thematically, it is a lot about togetherness and separation in the modern family, about identity and memories. You see the memories, dreams, and experiences they share, and also the mystery – “who was this mother?”
I wanted to do a portrait of the modern teenager, avoiding the stereotype. I did a lot of research with gamer kids and online gaming. There’s this scene in the film when the father enters the game and his avatar salutes the kid and immediately gets killed.

(Laughs) that was pretty funny.

That’s modern life, you know? Social media changes paths of communication even within the family.

There is a climax in the movie, that moment in slow motion during the car crash. Please tell me more about it.

I think one of the fun parts of making movies is coming up with sequences like that; a weird, hopefully touching portrayal of the son imagining what happened to his mother in the car crash. It is almost like a short film inside a film, but it goes deeper too. You know, I come from the hip hop world, I think my films are like an album – song after song, kind of dynamic; and sequences are songs, short elements that create the story.