Self-expression in the digital age 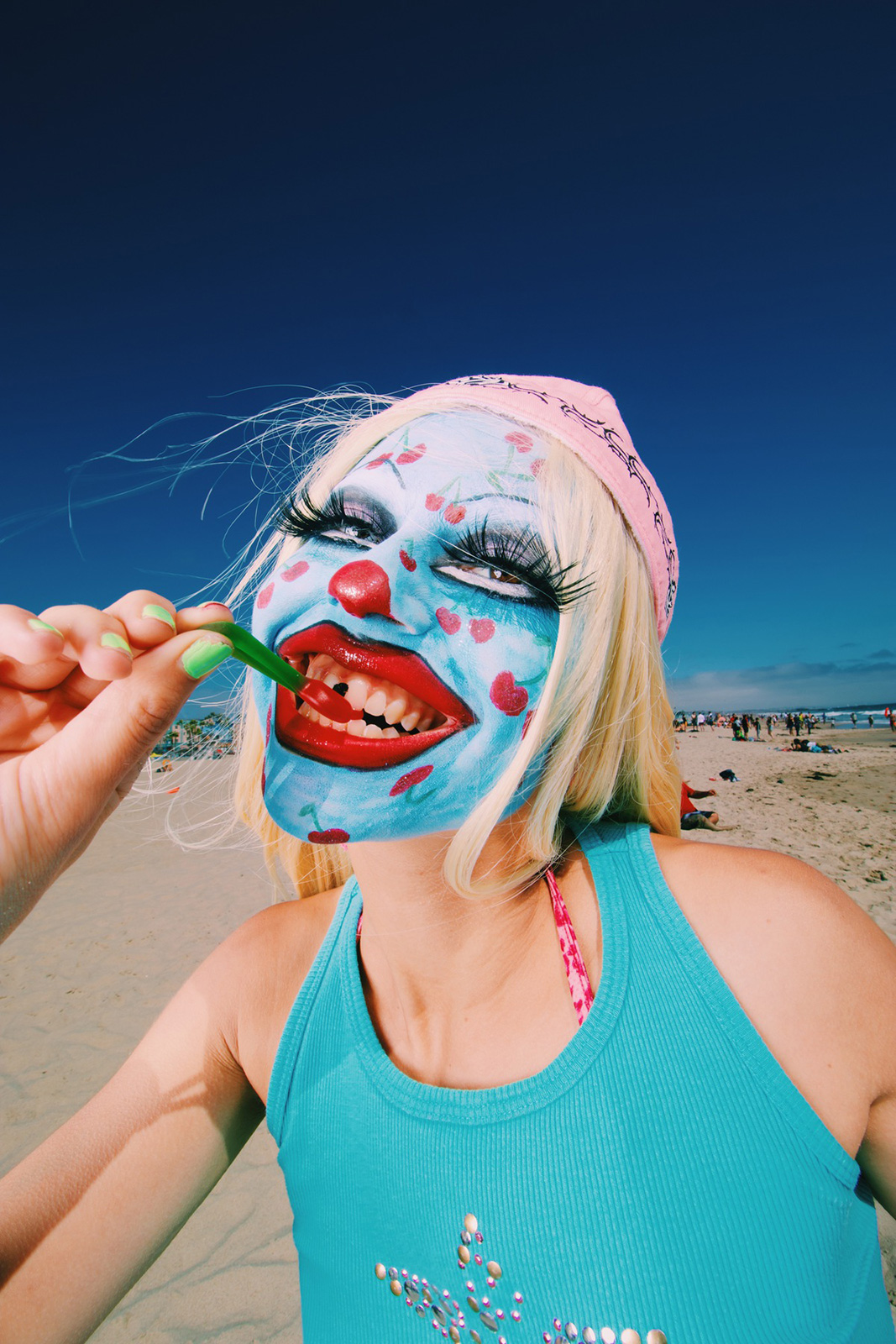 Immediately recognizable by her bold, colourful makeup looks, Jessie Edelstein is exploring what it means to be a ‘digital girl,’ with her latest audiovisual project Jessie.Mp3. Having already released two singles under Jessie.Mp3, Content.MP4 and Redbull, Edelstein is currently at work on an EP that explores the relationship between the digital and real world. Her makeup and style feel like a hyperpop star obsessed with the 2000s and influenced by digital culture. She imagines a world in which digital plastic surgery exists, allowing a person to simply make a new face with the click of a button. We spoke with Edelstein about her music, queer identity, and self-expression in the digital space, particularly about how the face can be used as a platform to express one’s identity.

Who is Jessie.MP3, if you could sum her up in one sentence? Is she an audiovisual representation of hyperconsumption in the digital age?
The Jessie.Mp3 project allows me to express ideas through music, visuals, and performance that I cannot do through face paint looks alone. Your definition is definitely fitting as well.
Beyond Jessie.MP3, your second IG page @digitalworld_archive.jpg is a homage to the 2000s club scene and party culture, with its images of low-rise jeans, girls with chunky highlights and flip phones. Why do you believe the 2000s had such a great impact on you, both personally and creatively?
I began curating images for my side project Digital World Archive.Jpg about 2 years ago. The images are sourced from public Flickr accounts, almost all of which are abandoned and haven’t been active in over 10-15 years. I like recontextualising these seemingly forgotten images and breathing new life into them.
I’m fascinated by the idea of one’s ‘digital footprint,’ how even after you’re gone you can exist through what you’ve left behind in digital space. These images act as visual capsules of time, space, and culture. The 2000s specifically had an impact on me because I was growing up during that time, it was also when the Internet and social media were really taking off. I believe you can learn from past cultures like this one in order to inform the future.
Your visual art beyond your face paint is hyper-saturated, pixelated and heavily Photoshopped, all effects of 21st-century artistic tools. What role do you think digital tools and technology will play in visual artmaking in the next 10 years? Will we see the decline of traditional art forms like painting and sculpture?
Digital tools have already made a pretty substantial impact in artmaking and I believe they will continue to do so. We may see a decline in traditional mediums if museum/gallery infrastructure evolves to fit a more digitised world but I think many people, myself included, have already started to use traditional artmaking techniques in a new way.
What do you feel is the relationship between queer identity and digital culture? How do you explore this relationship in your art?
I feel like as a queer person, you inherently subvert what’s expected of you based on cultural and societal norms. Because of this, you’re granted the freedom to exist outside these confines and explore yourself and the world around you in a more creative way. Additionally, I feel like the freedom found in digital space also allows the user to explore beyond what’s possible in the physical world. I like exploring this relationship in my art because it’s limitless.
Can you pick one of your favourite makeup looks and break it down for us? What was the inspiration behind it, and what were you trying to convey?
My favourite look I’ve done so far is my full glitch face from 2019. I like to imagine a world in which technology and plastic surgery have advanced to the point where your skin, especially your face, could be pixelated and different imagery could be programmed in. Because of this, I often incorporate digital elements into my faces. The look itself was very intensive and took about 3 hours to render. I was really proud of how it turned out in the end so it was definitely worth the effort.

“Essentially, I see the blank face the same as a blank canvas or blank piece of paper, and by painting on my face I feel like I’m showing the world how I always feel on the inside.”
How much of Jessie.MP3 is inspired by or related to your previous work performing as Virgo Couture? Is Virgo Couture permanently retired or is the opportunity for return?
I conceptualised Virgo Couture, my drag queen persona who existed within extremely specific parameters when I was 19. Although drag and nightlife will always be at my core, I retired the project because I no longer felt like that name and persona served me like it once did. Virgo Couture is permanently retired but Jessie.Mp3 is a direct evolution of that project. Many people believe ‘Jessie.Mp3’ is a persona when in reality it’s just the name of my current music performance project. I do not like the idea of artists being tied down to a single project for life. I do not plan to work on Jessie.Mp3 forever, so when this project is no longer serving me I’ll evolve again and focus my creative energies elsewhere.
You describe Jessie.MP3 as a “digitalgirl.” What do you think of completely digital artists like Lil Miquela? Do you believe that they are the future of music?
I remember discovering Lil Miquela on Instagram like 5 years ago and thinking how cool she was. I was under the impression that she was someone’s art project or something like that. My idea of her soured once I learned she was actually created by a digital marketing company to sell products. My version of a digitalgirl is more based in a curated online identity and how that can exist within a physical world versus Lil Miquela who’s essentially just a capitalistic device. I believe the future of music is unlimited.
In one of your IG posts the caption reads “Everyone’s face is just a 3D sculptural object to which they can augment to their liking.” Similarly, in a recent Tiktok, you expressed a desire to erase your face and rebuild it completely from scratch. It seems that you do not believe the face is an inherent marker of identity, the way many people do. Would you say then that the face is merely a platform for expressing one’s identity?
I do believe that someone’s face is a marker of their identity, but I also believe everyone should have the autonomy to express their inner selves on the outside. Essentially, I see the blank face the same as a blank canvas or blank piece of paper, and by painting on my face I feel like I’m showing the world how I always feel on the inside. I know this idea can be confusing for some people but to me it’s really second nature.
I’ve encountered some people who are under the impression that my augmentation stems from a place of insecurity, which is untrue. It actually comes from a place of security and just an overall understanding of myself and how I’m capable of presenting visually. I truly believe everyone is capable of accessing this within themselves.
You posted a TikTok seemingly mocking artists who have expressed concern that their labels were forcing them to make TikToks. Can you explain that video? How do you feel about artists not wanting to engage with the platform?
In online spaces, I feel like there’s this contrived, formulaic path in place right now for emerging artists, primarily revolving around social capital and virality. Personally, I don’t find either of these things to be very interesting. I do think it’s fascinating that more established artists are being ‘forced’ to create content on platforms like TikTok despite the fact that they’ve already achieved a higher level of commercial success and what that says about our current culture. I don’t take my Tik Tok presence very seriously so I just like to have fun on there.
You just collaborated with Tomasa del Real, known for coining the term ‘neoperreo,’ which she has described as a style of music inspired by reggaeton and born out of people connecting via the digital age. What was it like collaborating with Tomasa?
I did, I had the opportunity to paint Tomasa for one of her recent performances. She’s truly one of the most genuine and kind people I’ve met so far in Los Angeles. She discovered me through Instagram and I really appreciate her kindness and support of my work. Tomasa also connected me with Sandra Blow, a photographer based in Mexico City, and we were able to shoot together while she was visiting LA. Sandra is really interested in documenting ‘trashy couture,’ which also aligns with what I do. I think it’s super cool and inspiring that despite all of us coming from different backgrounds and cultures, we can connect through these shared interests.
Your most recent release, Content.MP4, showcases the overwhelming, dizzying nature of existing on social media, while Redbull from a few months ago appears to be a commentary on celebrity culture, with references to branding, hypersexuality, and invasions of privacy. What other tenants of pop and Internet culture would you like to explore with Jessie.MP3?
I’ve been working on my EP for the past year or so with my friend/collaborator/producer Cancercrush and it’s currently in its final mixing mastering stage. It’s been such an amazing experience working with cancercrush, we speak the same language creatively which has made collaborating so easy and fun. I really couldn’t have started this new stage of my career without him. My EP primarily explores the relationship between my digital and human forms but I’m always looking to pop and Internet cultures for inspiration.