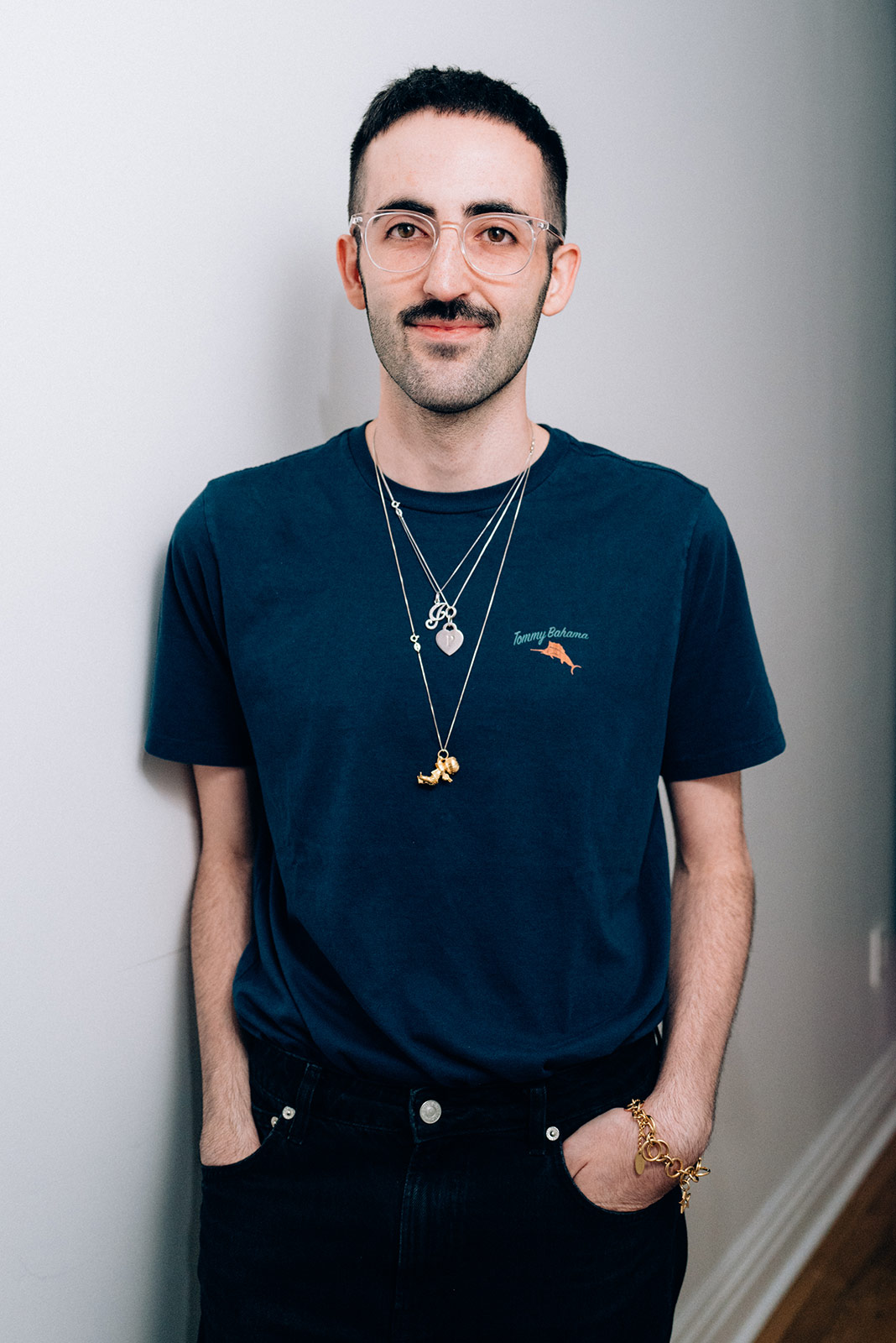 Who is the Wiederhoeft bride? “They are confident, they are fun, they are up for an adventure. They have a sense of humour about themselves and about the world around them – they are serious but don’t take things too seriously. Feathers and tulle excite them but don't define them,” says Jackson Wiederhoeft, a Parsons School of Design graduate, who launched his first bridal collection amidst the global pandemic.
After winning the Women’s Designer of the Year in 2016 at Parsons, the designer worked at Thom Browne, honing the craft and gaining the understanding of a fashion show as a holistic, theatrical experience. “He was so dedicated to this very theatrical experience that would transport the viewers, and every detail of the collection had to support the experience,” the designer reminisces about Browne, known for his conceptual presentations. “I was never particularly drawn to tailoring really, the suits and coats and trousers that Thom is so famous for,” Wiederhoeft admits. “It was more about his mindset, the incredible other world he created.” The theatrical essence of Browne’s creations is very much present in Wiederhoeft’s bridal collection.

With fashion evolving incessantly, bridal wear is slowly straying away from the traditional silhouettes, but the quintessential white gown has endured. “I think one aspect of weddings that can be challenging to many celebrants is the idea of tradition. We are definitely raised to believe weddings should look a certain way culturally,” the designer comments. His bridal collection breaks away from the mould with unorthodox separates, “crafting the narrative” through drapery, fabric and silhouettes.

Wiederhoeft believes pandemic is a high time to launch a bridal collection. “I actually hope that corona will inspire people to start to rethink their weddings more seriously... now more than ever is the time to figure out what you really want, what will make the day truly magical for you.”

The designer’s references for the alternative bridal wear span from ballerinas like Anna Pavlova, Alicia Markova and Moira Shearer, to masters like John Singer Sargent, Élisabeth Vigée Le Brun and Edgar Degas. Actually, as well as Cecil Beaton’s Bright Young Things exhibition at the National Portrait Gallery (now closed due to Covid-19) rekindled the interest in the extravagant world of the glamorous and eccentric socialites, seen through the eyes of Beaton, Erdem’s Fall 2020 collection earlier this year, for example, married Beaton’s 1920s to Erdem Moralioglu’s 2020s. For Wiederhoeft, it was more about “the spirit of the time, rather than the actuality of the time; The spirit of reckless abandon.” “It's all the impression,” he says, “Primarily of Beaton’s work – this very staged, theatrical, seen-through-gelatin world with lots of lurex and lamé. It feels very effortless while simultaneously very produced.” Like Zoom weddings, you know. 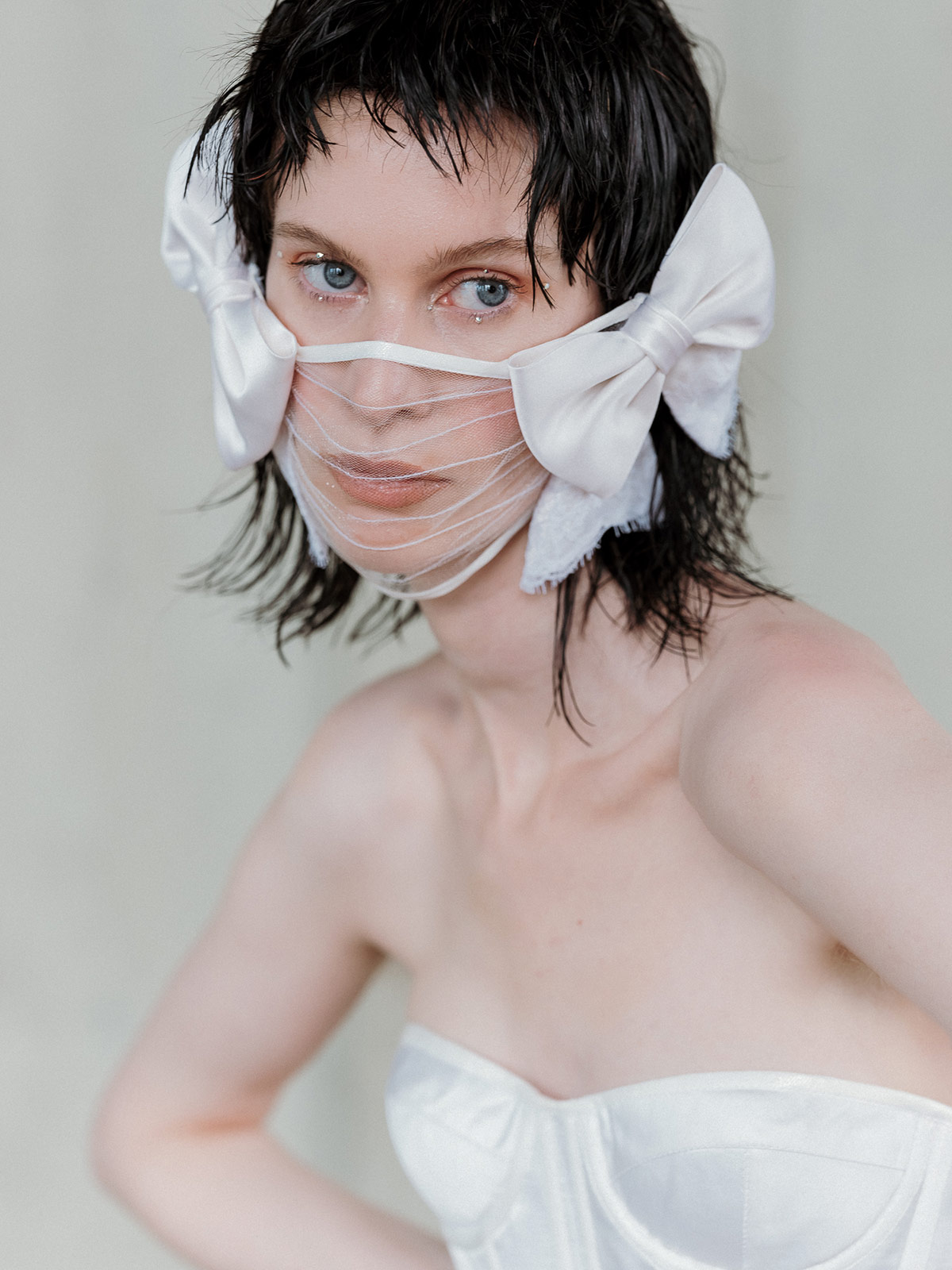 After graduating from Parsons School of Design in 2016, you have worked at Thom Browne. How has working there influenced your namesake label’s aesthetics and your creative process?
Working for Thom was an incredible experience. What was so powerful to me was the way that Thom treated the shows. For him, it was really a complete experience that defined so much of what the brand was about. He was so dedicated to this very theatrical experience that would transport the viewers, and every detail of the collection had to support the experience. I was never particularly drawn to tailoring really, the suits and coats and trousers that Thom is so famous for; it was more about his mindset, the incredible other world he created.
Having left the three-year design position at Thom Browne and established your eponymous label, what are some of the issues and obstacles you have faced as a young designer in the United States?
Of course, right now, being a small designer is more challenging than ever given the economic climate. One of the biggest challenges currently is shifting to a business plan that works post-Covid. Originally, I was hoping to grow sales primarily through wholesale accounts, but now it’s very clear buyers are focusing on their established bestsellers, and that direct-to-consumer is the most viable option for a small brand.
Your IG bio reads: “A sense of modern nostalgia.” Could you elaborate on what ‘modern nostalgia’ means in the context of your label?
Modern nostalgia refers to something that is romantic in its essence, evoking a familiar feeling, like something you may have seen as a child. However, the work is executed in a way that is modern in its fabrication, with a graphic nature that feels contemporary. It’s sort of my way of saying that I am completely not afraid of, and in fact embrace the historicism of the work. But I strive to do this in a way that feels modern rather than pining for the past. 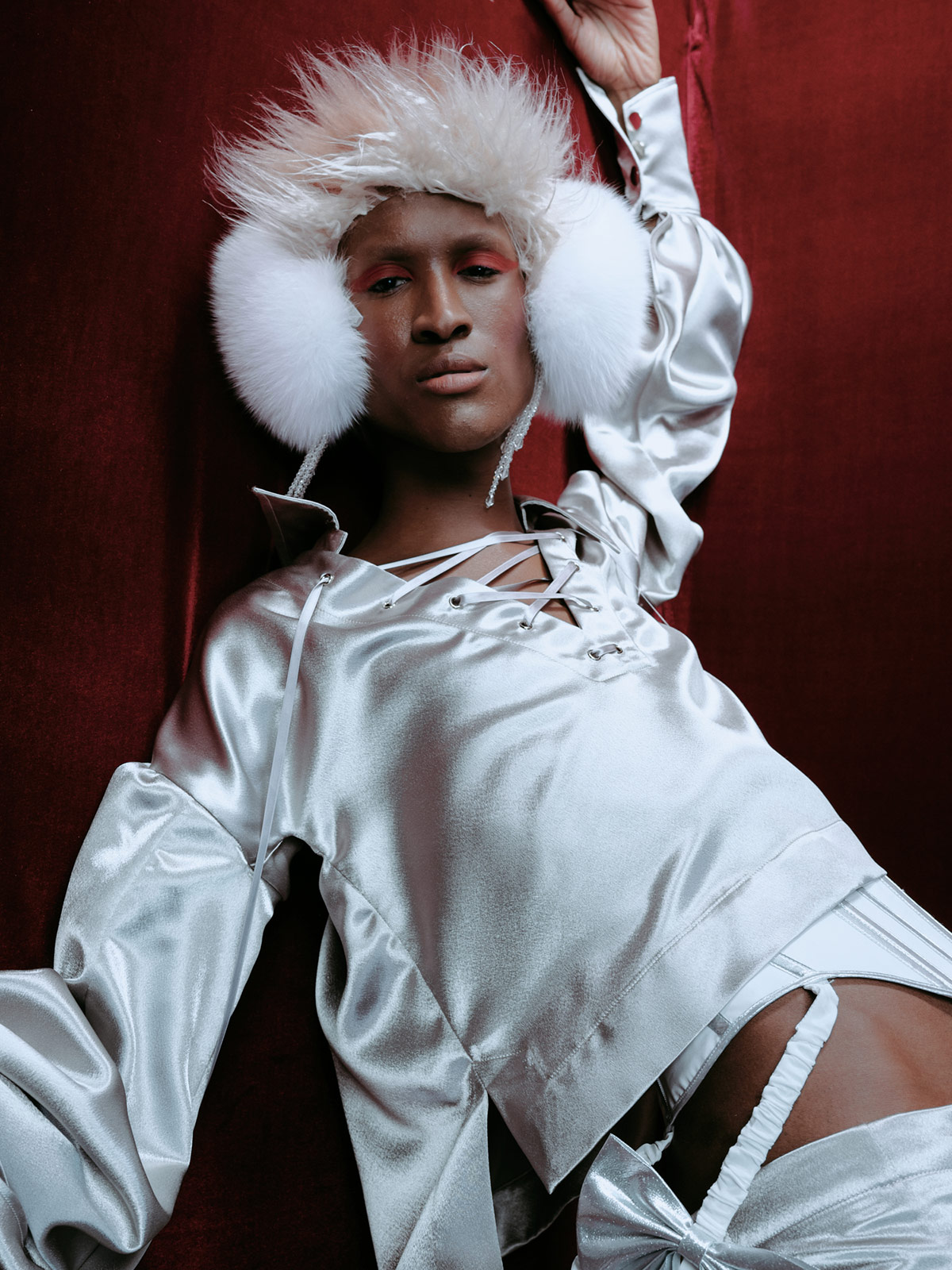 You have mentioned that now is an exciting time to work with brides for you. Why is that? Why did you decide to launch a bridal collection now, amidst the global pandemic?
Firstly, I think that business-wise, it makes a lot of sense. We’re seeing a very difficult market for ready-to-wear, especially for small designers. However, bridal, while suffering losses, is coming back with a stronger pulse. While very few people are purchasing evening gowns, people are still getting married – everyone still wants that special day, and celebrants are finding ways to have it. And I think that now, people have more time to spend planning their weddings, and I hope that this means they can explore options that they previously might not have considered.
As a response to the pandemic, you have incorporated tulle masks in the collection. Are there any other aesthetic changes you decided to make and details you adopted due to lockdown?
One of the biggest changes in the collection was the lack of embroidery – usually, this is a category I delve into full-force, but given factory closures worldwide, was something I was not able to design into for this collection. Instead, I focused more on silhouette, crafting the narrative by playing with the fabric and spending a lot more time draping and pattern making than I usually would.
What would you say is a perfect dress for the virtual wedding?
I would say the Tulle cherub dress is ideal – it packs a huge punch for being practically weightless, a beautiful layering piece constructed entirely of tulle. It also has a lot going on above the waist, so it’s perfect for anyone celebrating a Zoom wedding. 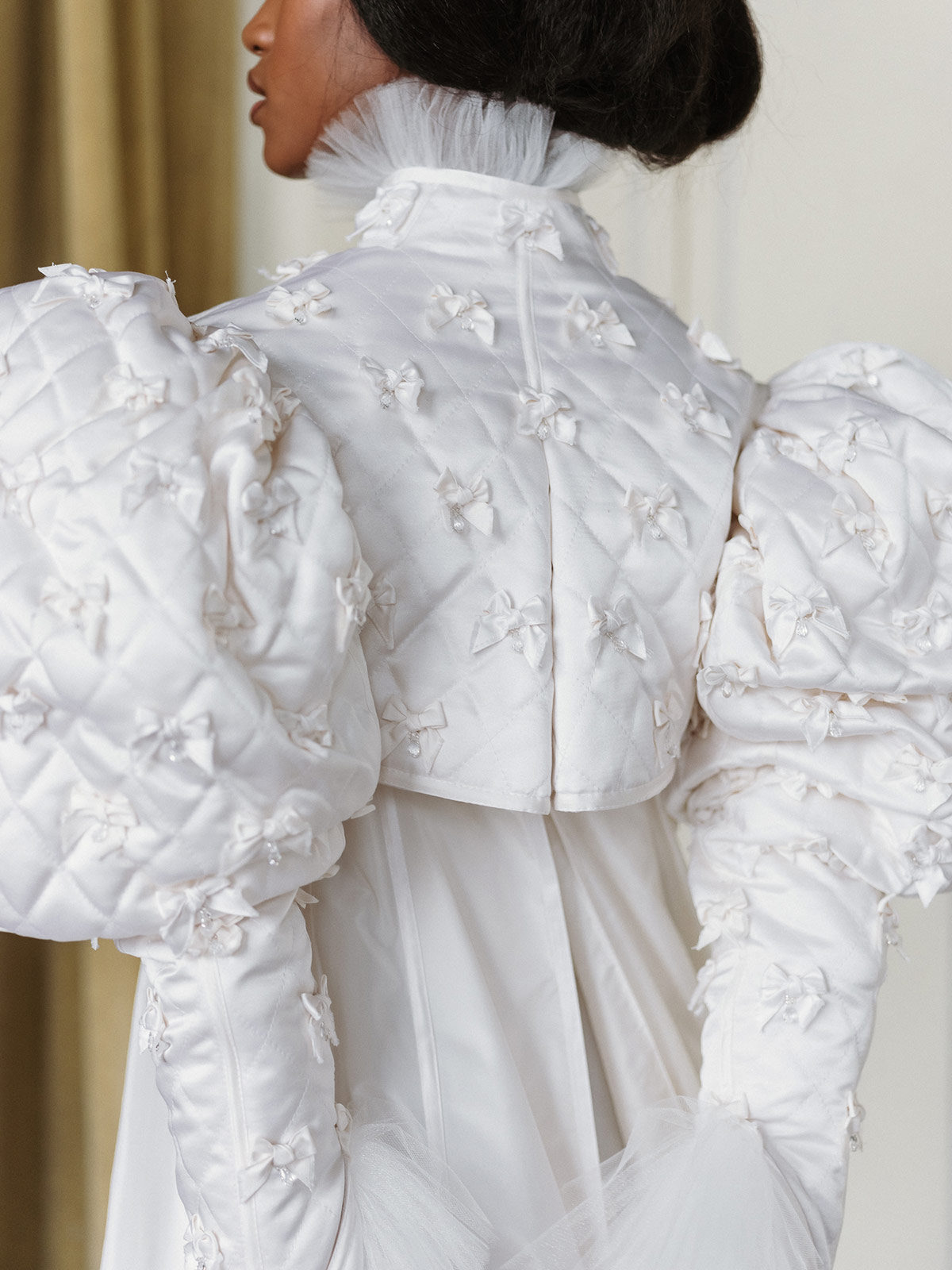 Although your collection breaks away from the mould with unorthodox separates, the bridal silhouettes on the market remain mostly same. With fashion evolving incessantly, why do you think bridal designs are more immune to change?
I think one aspect of weddings that can be challenging to many celebrants is the idea of tradition. We are definitely raised to believe weddings should look a certain way culturally. Additionally, many celebrants find themselves planning the wedding alongside a parent, who is also likely to bring their own experience into the equation. And, of course, you’re always trying to make everyone involved happy and also have the ‘picture-perfect Pinterest’ wedding. It's a lot of pressure and everyone has an opinion. I actually hope that coronavirus will inspire people to start to rethink their weddings more seriously. Now more than ever is the time to figure out what you really want, what will make the day truly magical for you.
Would you say that the collection is strictly for the altar, or can you imagine your customer wearing the see-through tulle top or a lace corset on the street?
I definitely designed the collection with the hope that it would be considered to have the same integrity as the ready-to-wear collections. So far, we’ve already seen people like Paris Hilton and Iggy Azalea wearing pieces from the collection in a very cool way that’s not bridal-specific. That’s really my favourite thing, seeing how different people interpret and reimagine the clothes. I wouldn’t go as far as to say that every piece can be worn again and again, but I think a lot of them can have a life after the altar, or a life completely separate from it!
Who exactly is Wiederhoeft bride?
They are confident, they are fun, they are up for an adventure. They have a sense of humour about themselves and about the world around them – they are serious but don't take things too seriously. Feathers and tulle excite them but don't define them. An appreciation for craft, theatre, museums is a quality often found but not required. 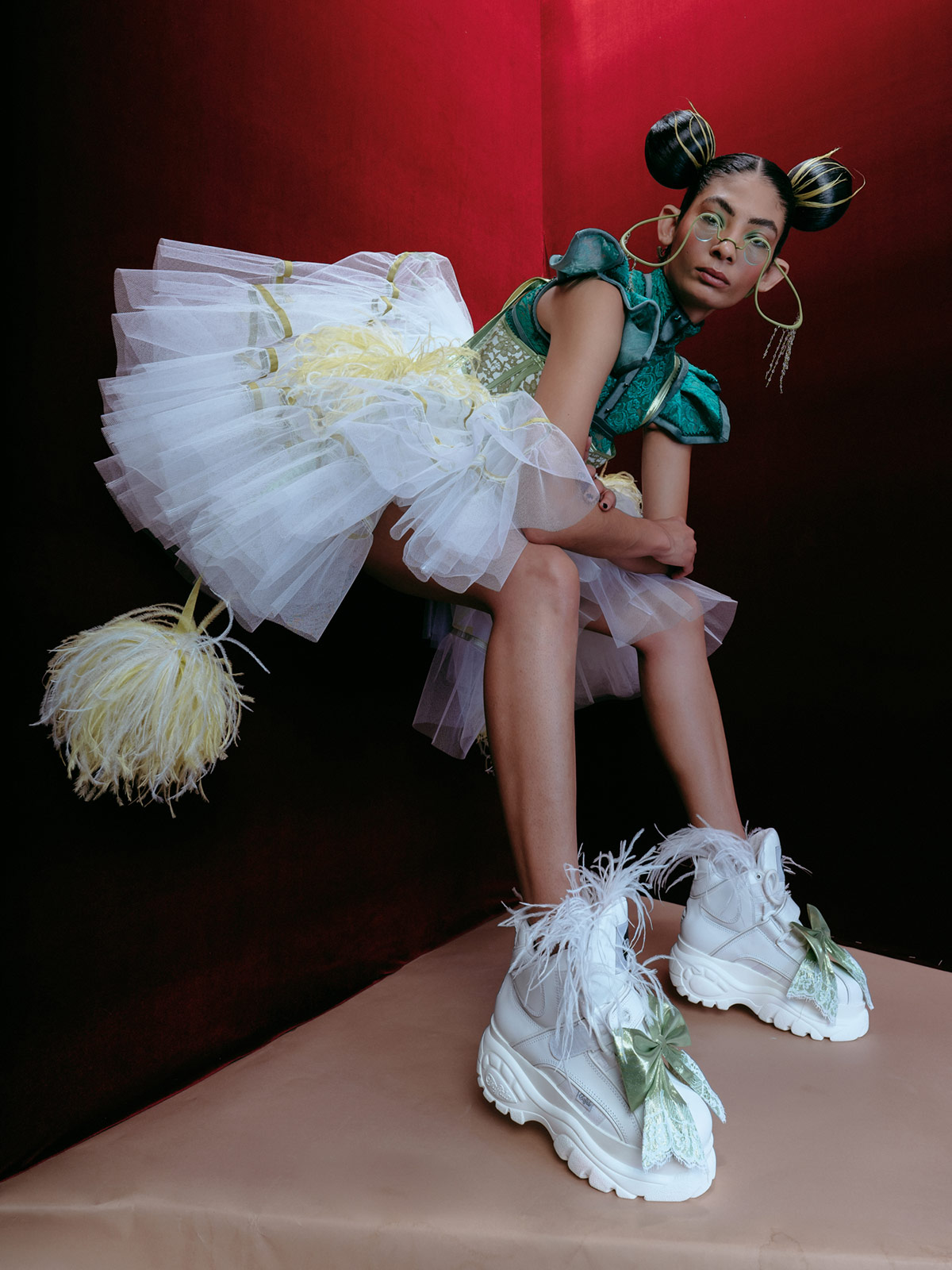 You have designed custom pieces for the likes of Rihanna, Aquaria, Lil’ Kim and, recently, Lady Gaga wore a design from your Spring/Summer 2020 Spooky Couture collection in Stupid Love. Can you tell us a bit about the idea behind that long-sleeved leotard with lamé bows?
The look that Gaga wore was from my debut collection, and the look was called The Dragon. I wanted to explore a reinterpretation of a really iconic villain in a very cutesy way. During the show, the performer who wore this look danced to a mix of Tchaikovsky’s Sleeping Beauty and Blvck’s Salvation. It’s all about combining disparate elements to create exciting new contexts for age-old archetypes.
How did the pandemic affect your creative process? Did the lockdown hinder the design process or did it give you more time to concentrate and reflect?
It definitely did both! I wasn’t able to design or work on the collection in the way I normally would at all. I was very limited in what I could do, in the materials I had access to, but sometimes, having severe limitations produces the most creative results. When you’re restricted and can only be creative in certain ways, you tend to funnel all of your creative energy into those channels and create something you wouldn't have otherwise produced. So in the end, yes, I had so much time to reflect and rethink the collection that I became much more intimate with it and formed relationships with the pieces that I normally wouldn't have done.
There is a performative aspect to your designs. And you have mentioned that Bright Young Things was one of the inspirations for the collection. What drew you to Cecil Beaton and his extravagant world of 1920s London?
For me, it's all the impression. Primarily, of Beaton's work – this very staged, theatrical, seen-through-gelatin world with lots of lurex and lamé. It feels very effortless while simultaneously very produced in the best way. I think the spirit of the time, rather than the actuality of the time, is what excites me. The spirit of reckless abandon, of creating indulgent art that pushes good taste and also comments on gender and art history is super inspiring to me. 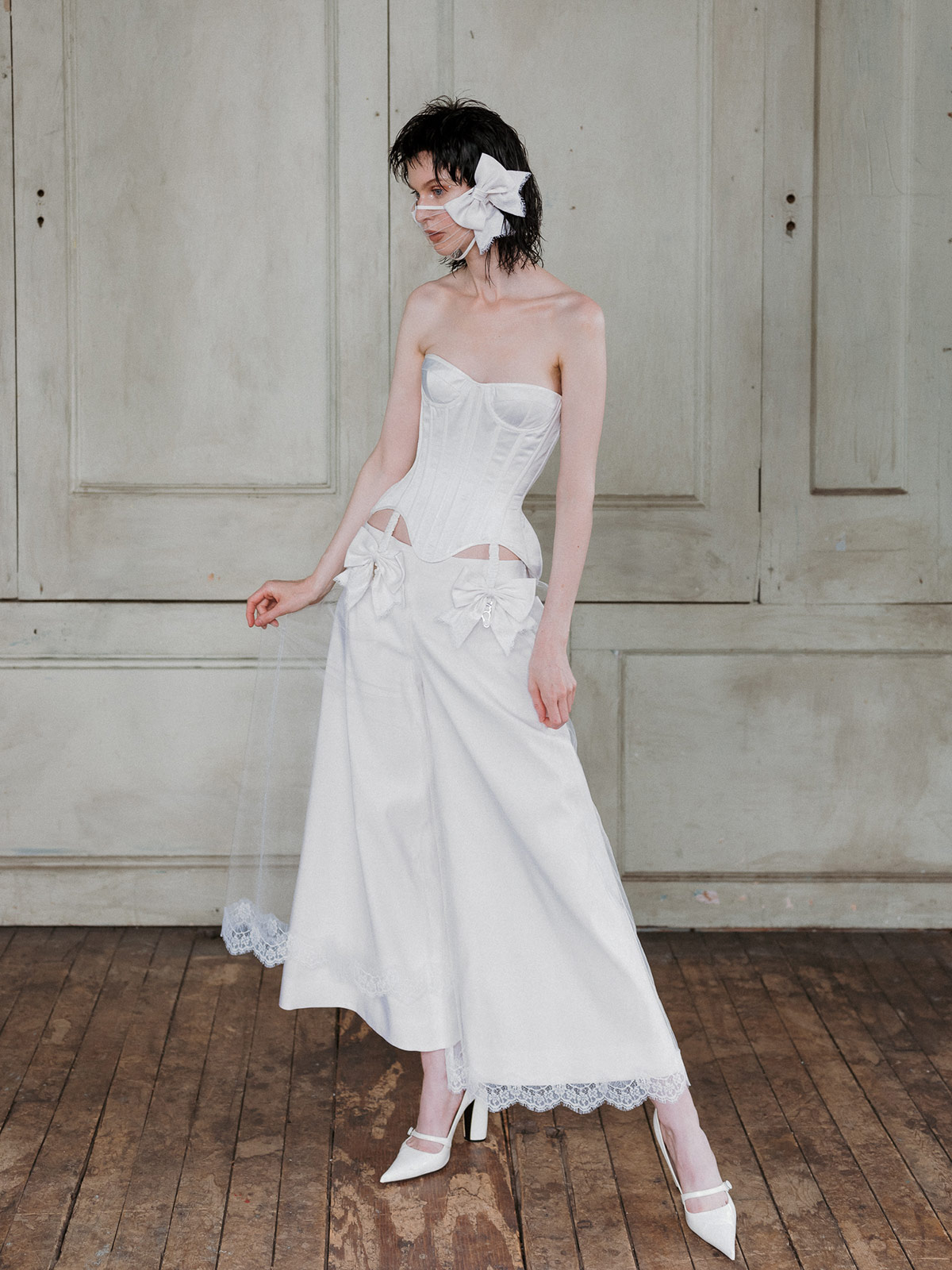 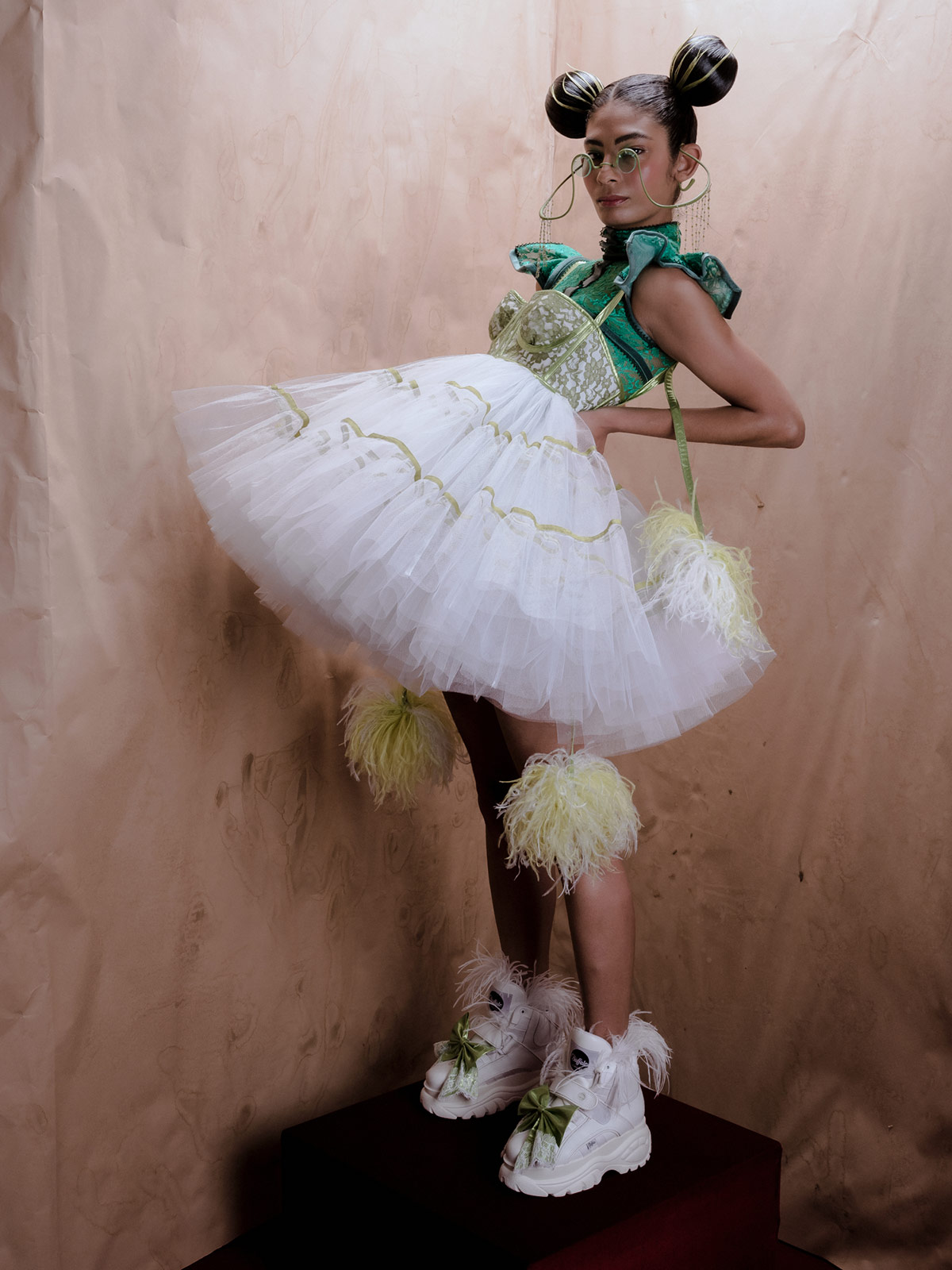 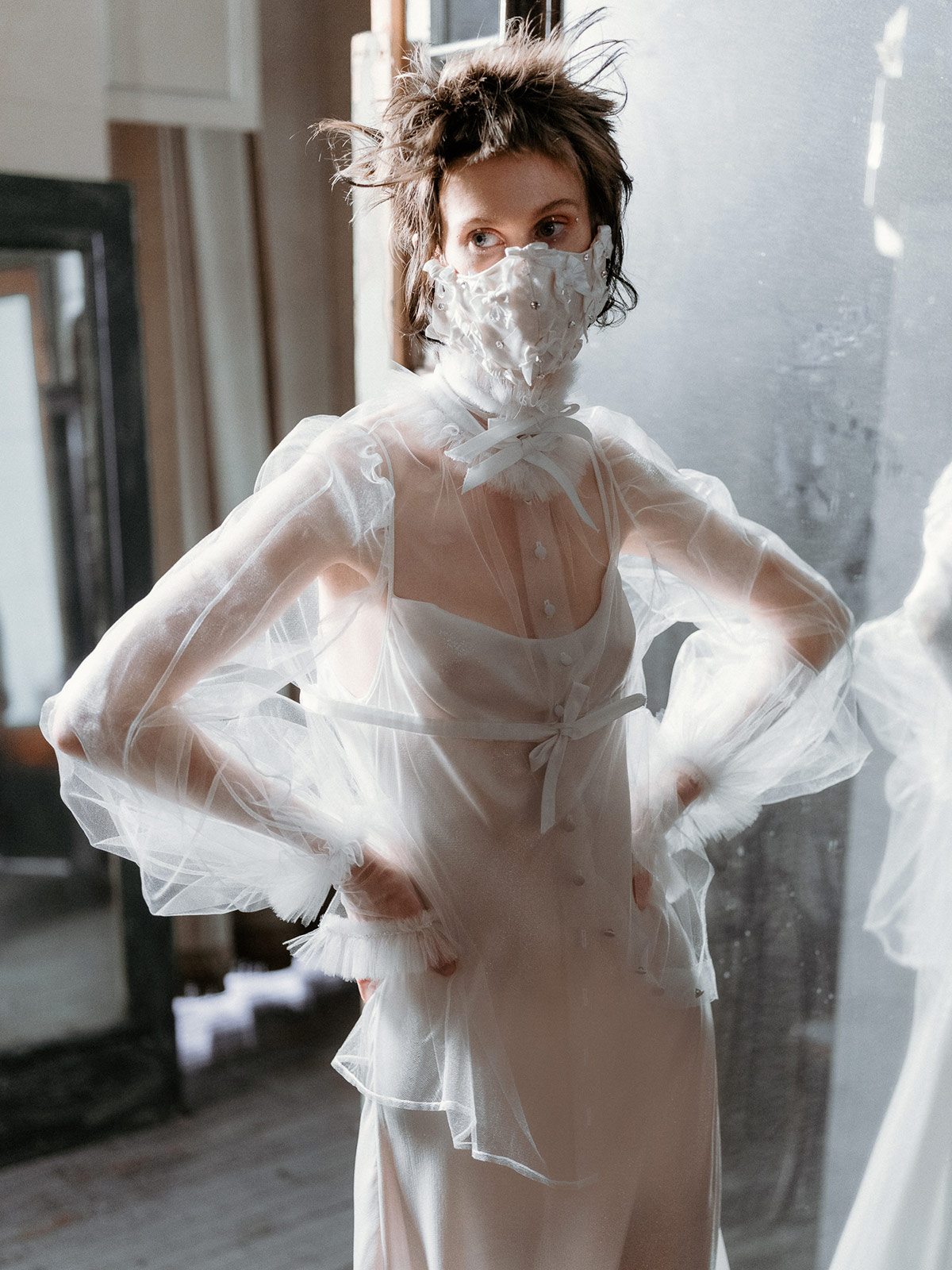 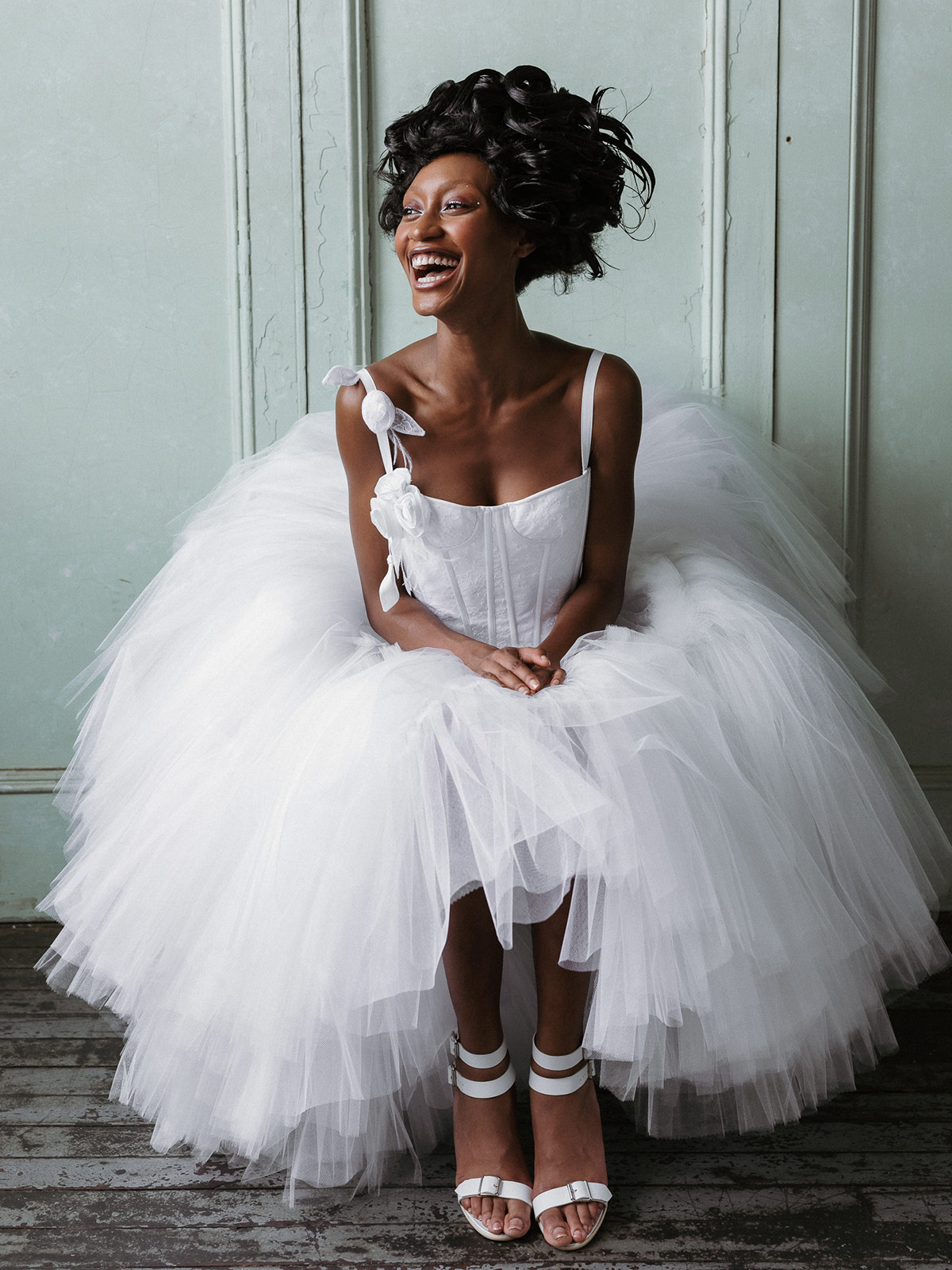 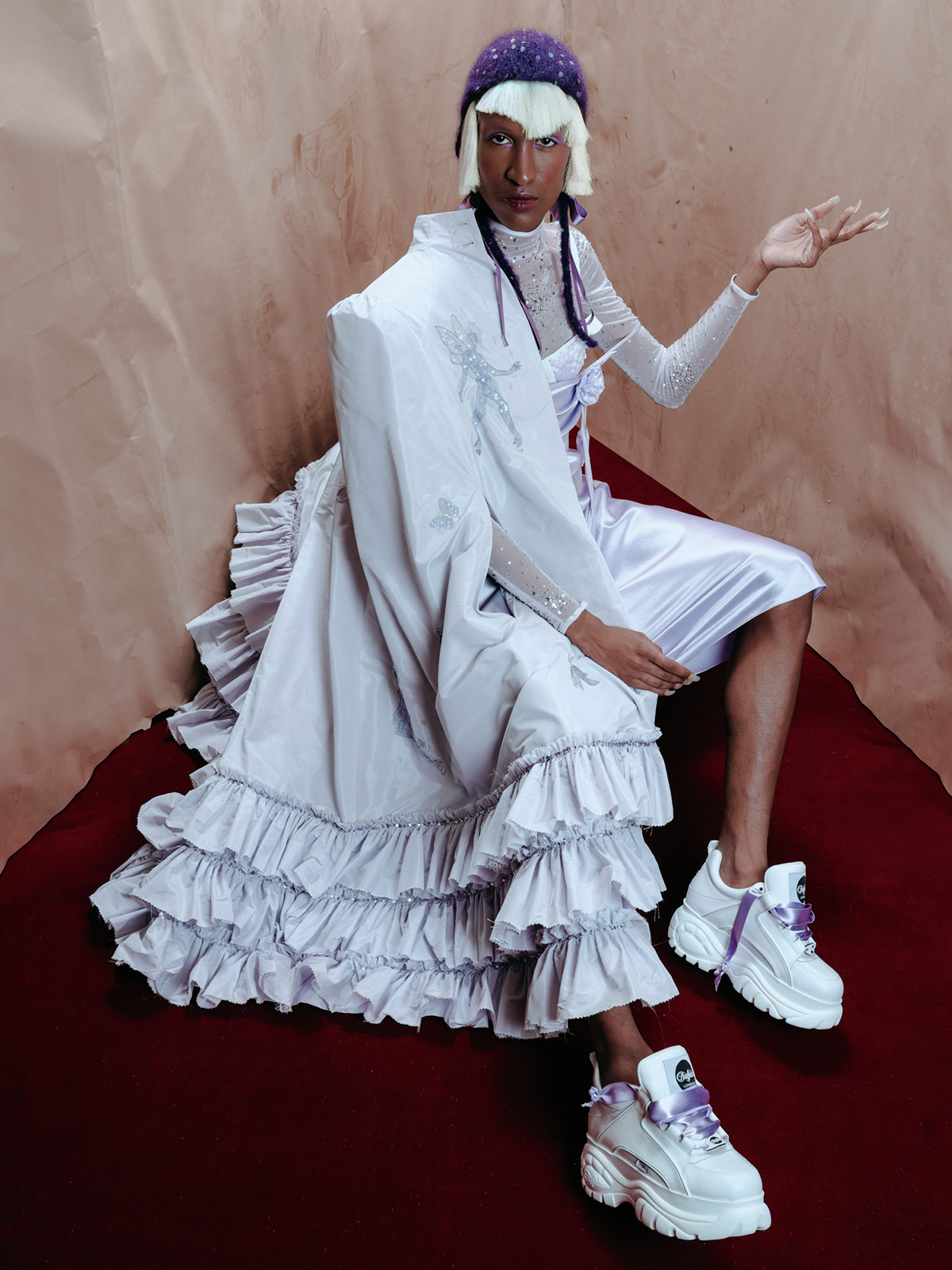 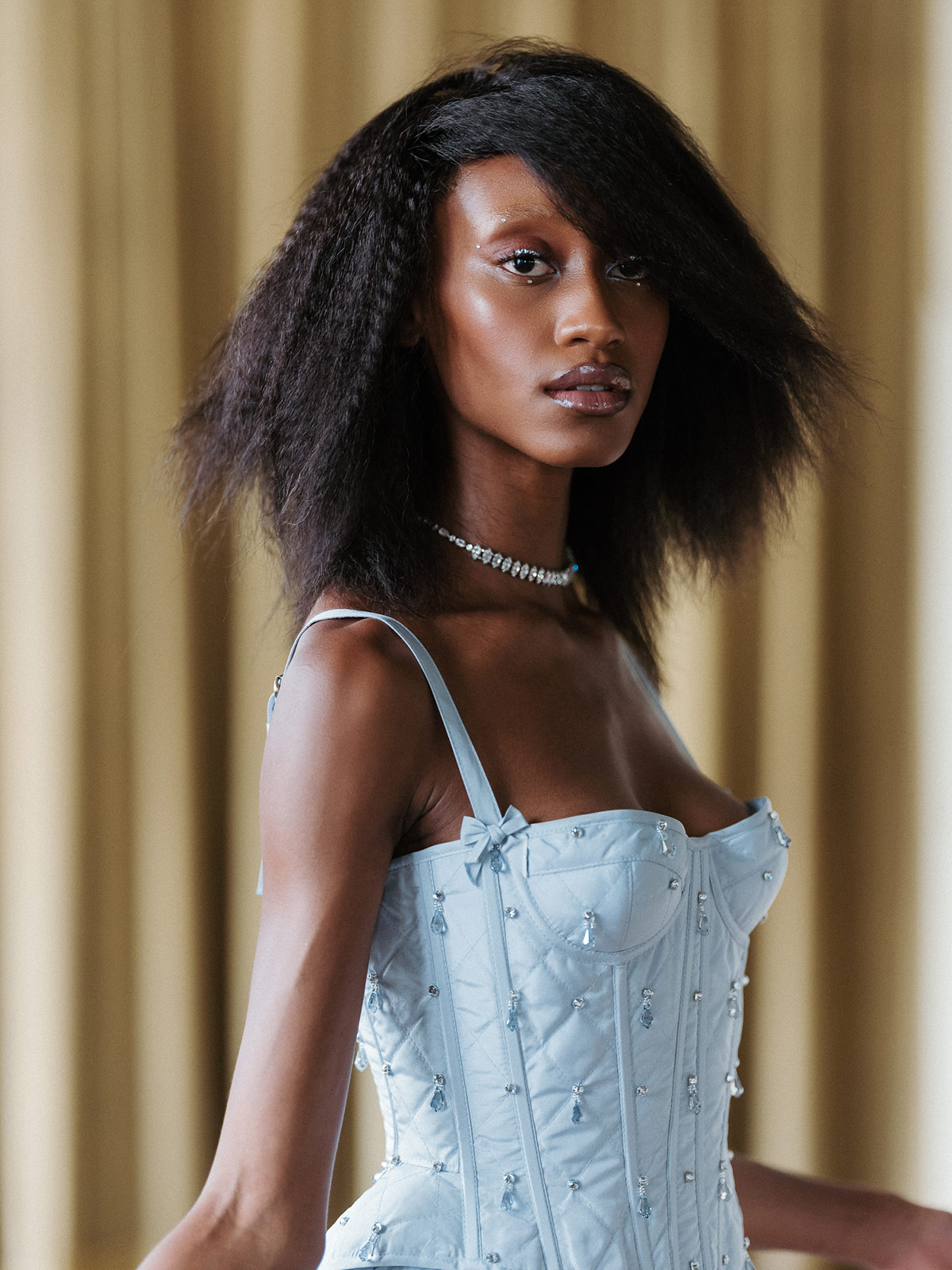 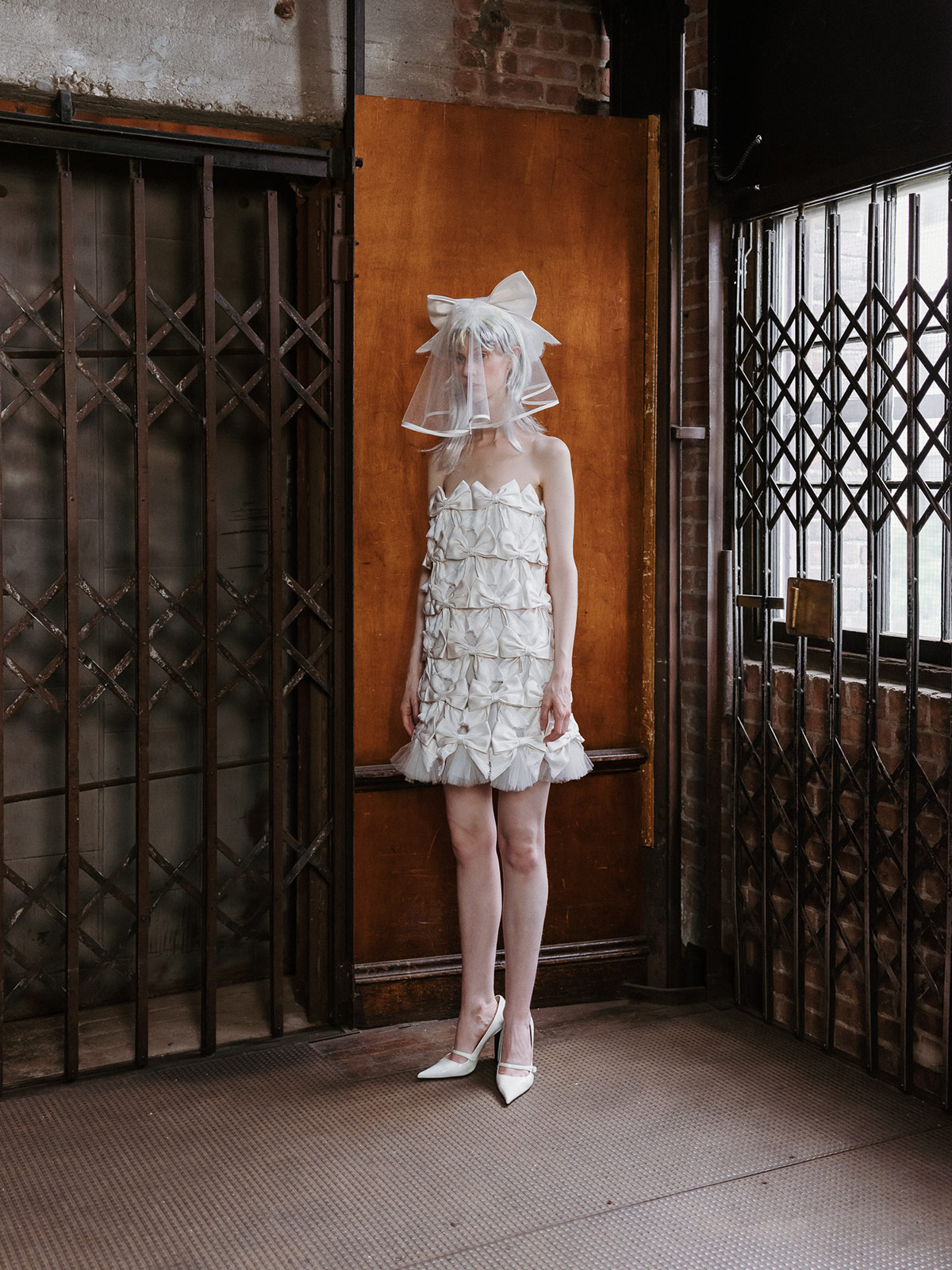 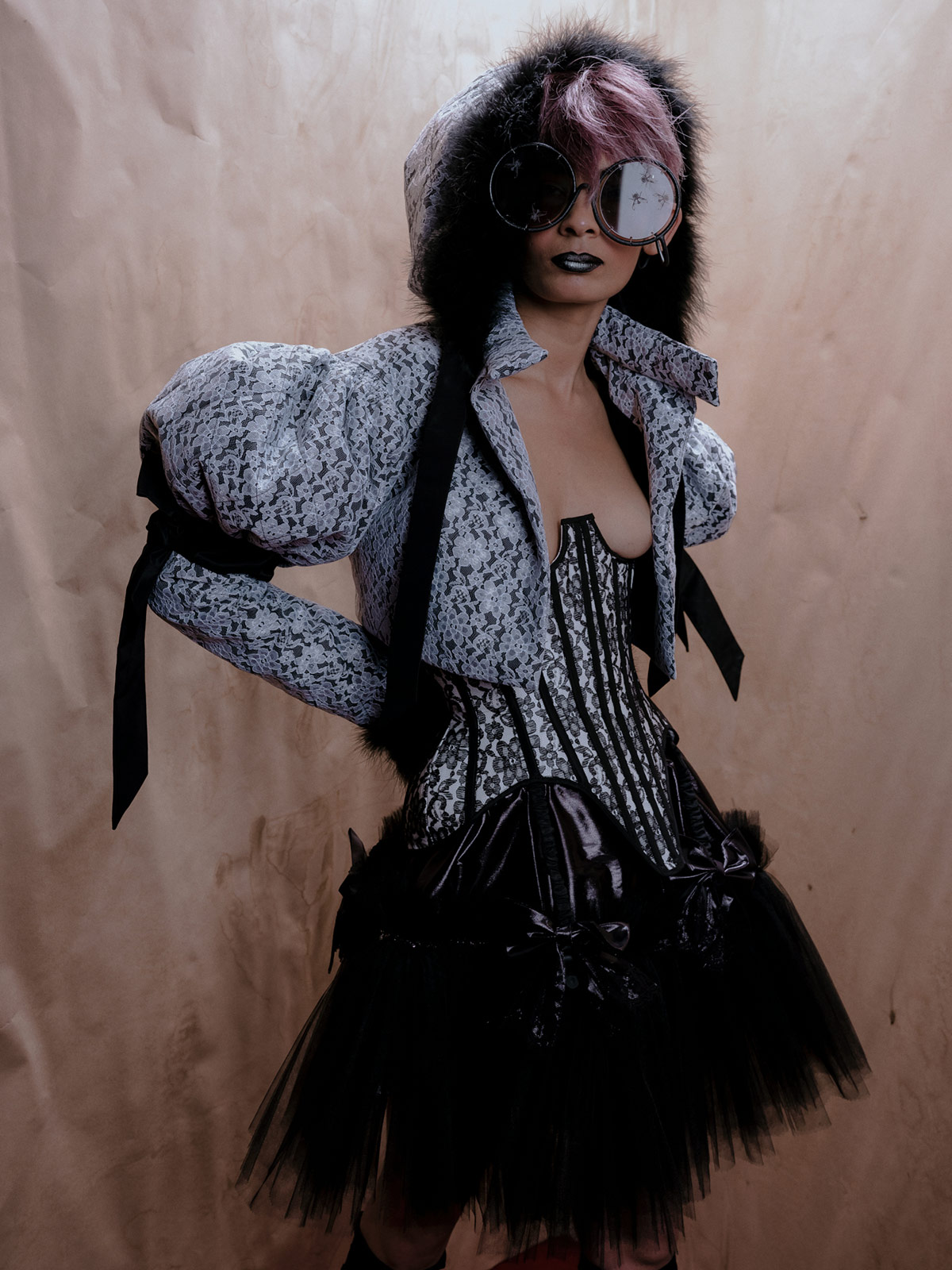 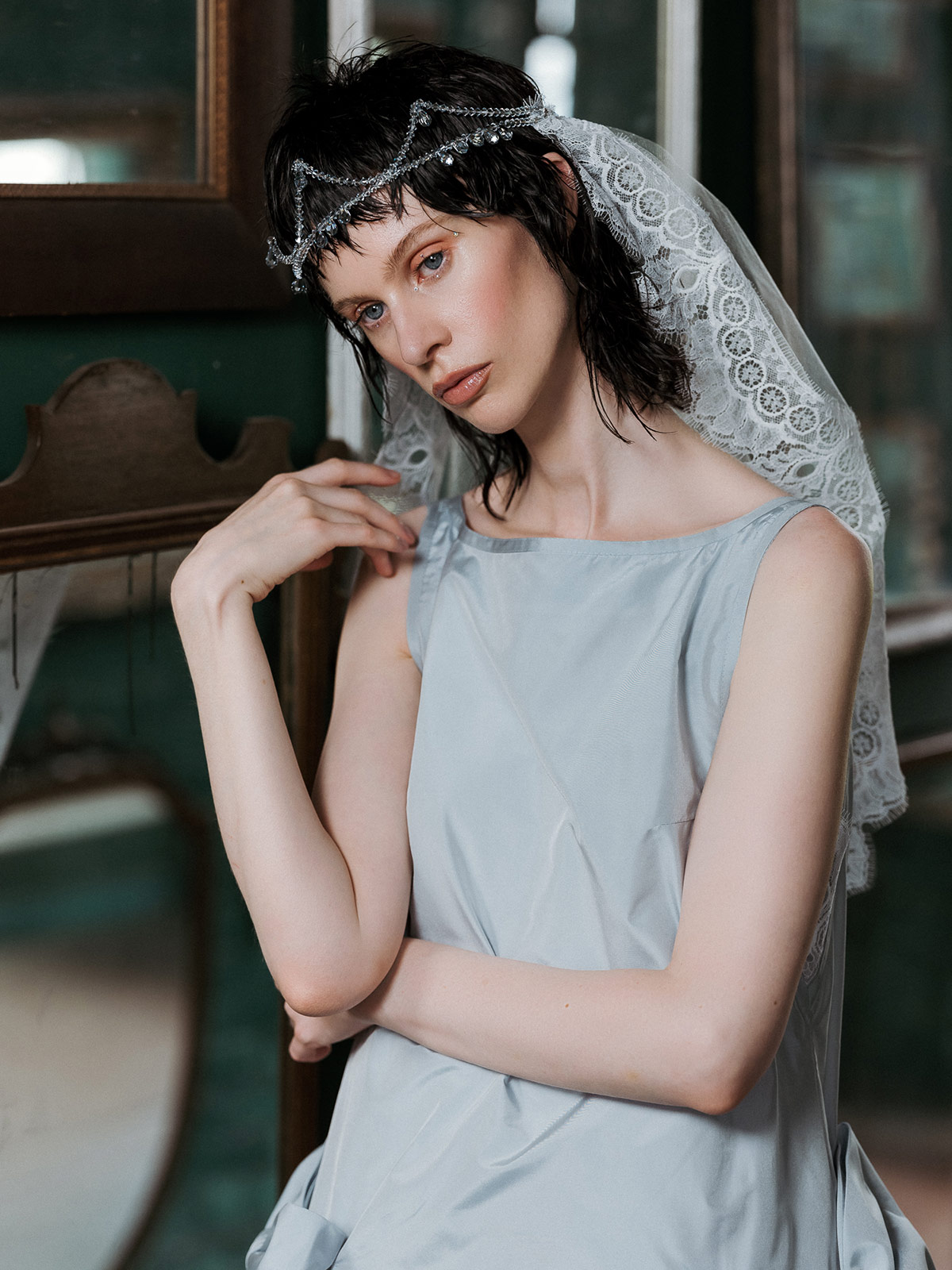 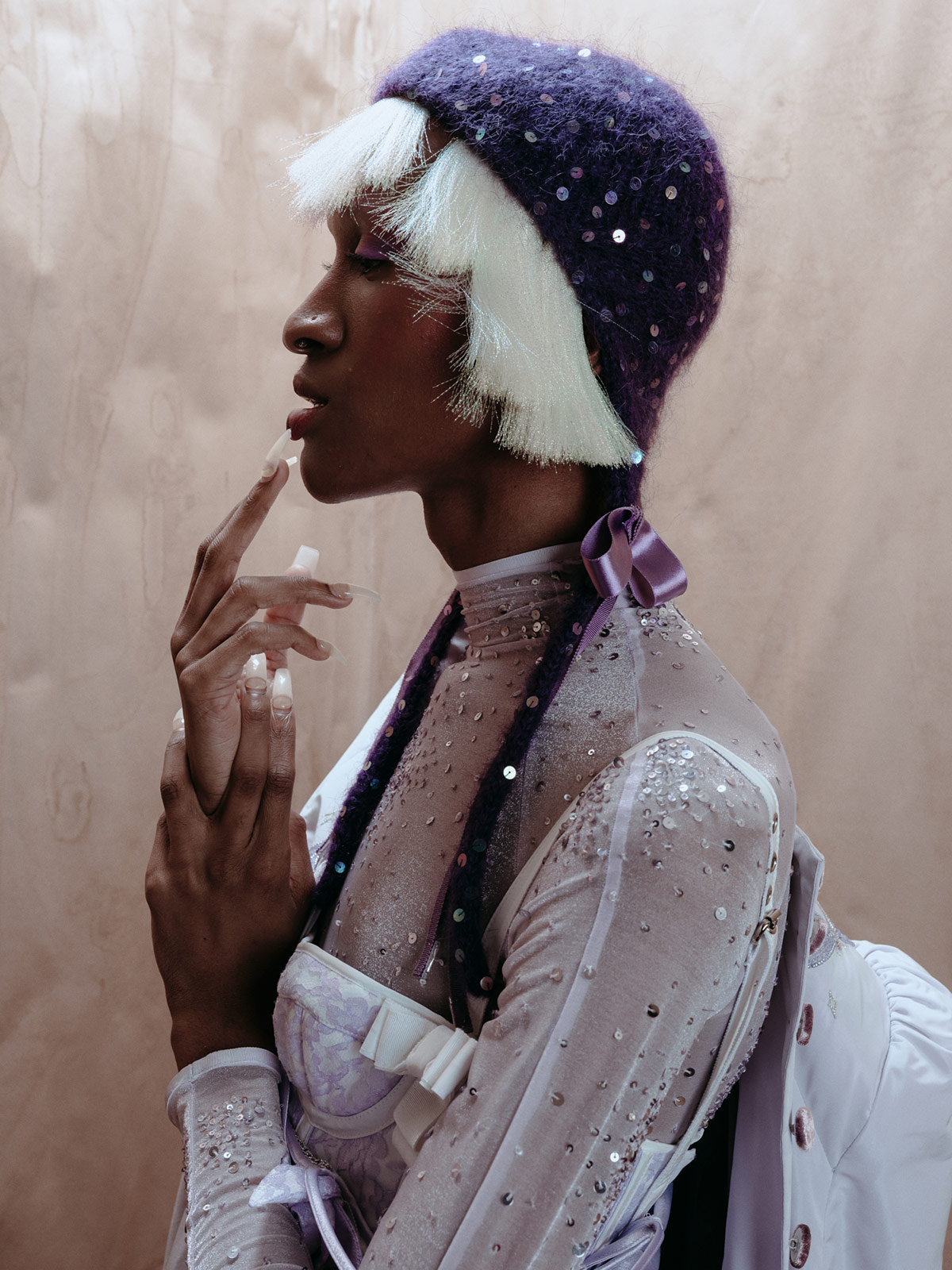 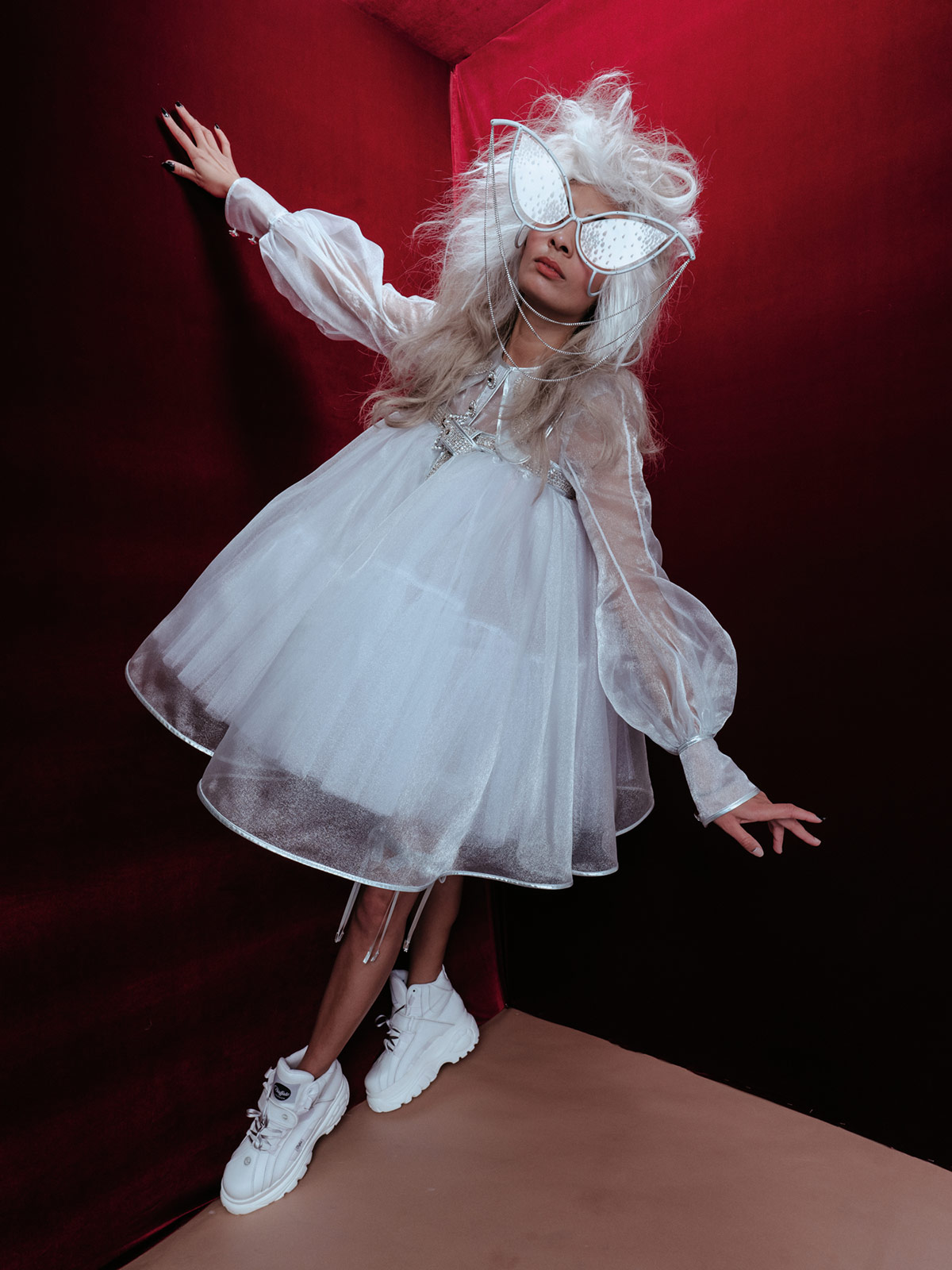 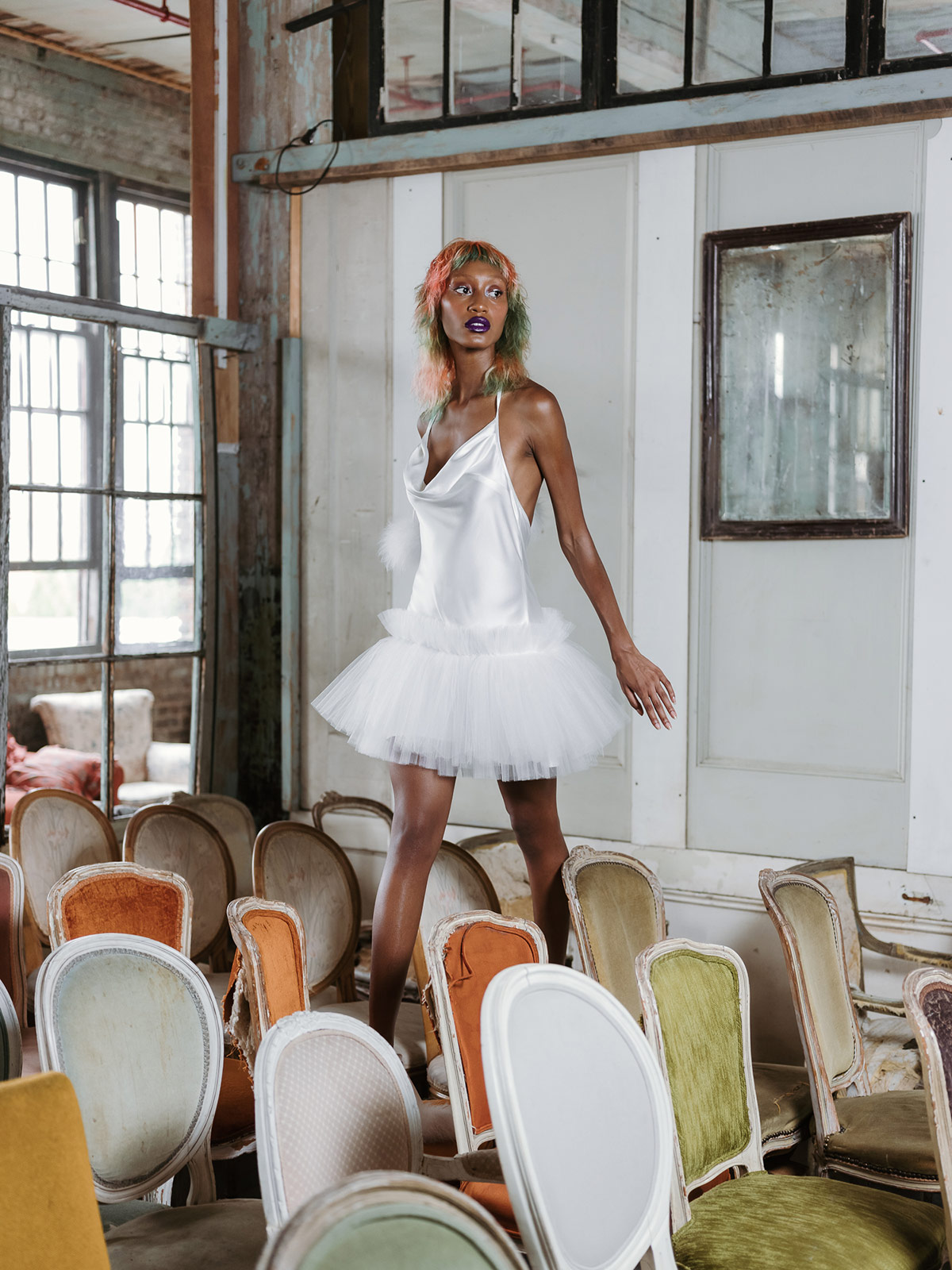 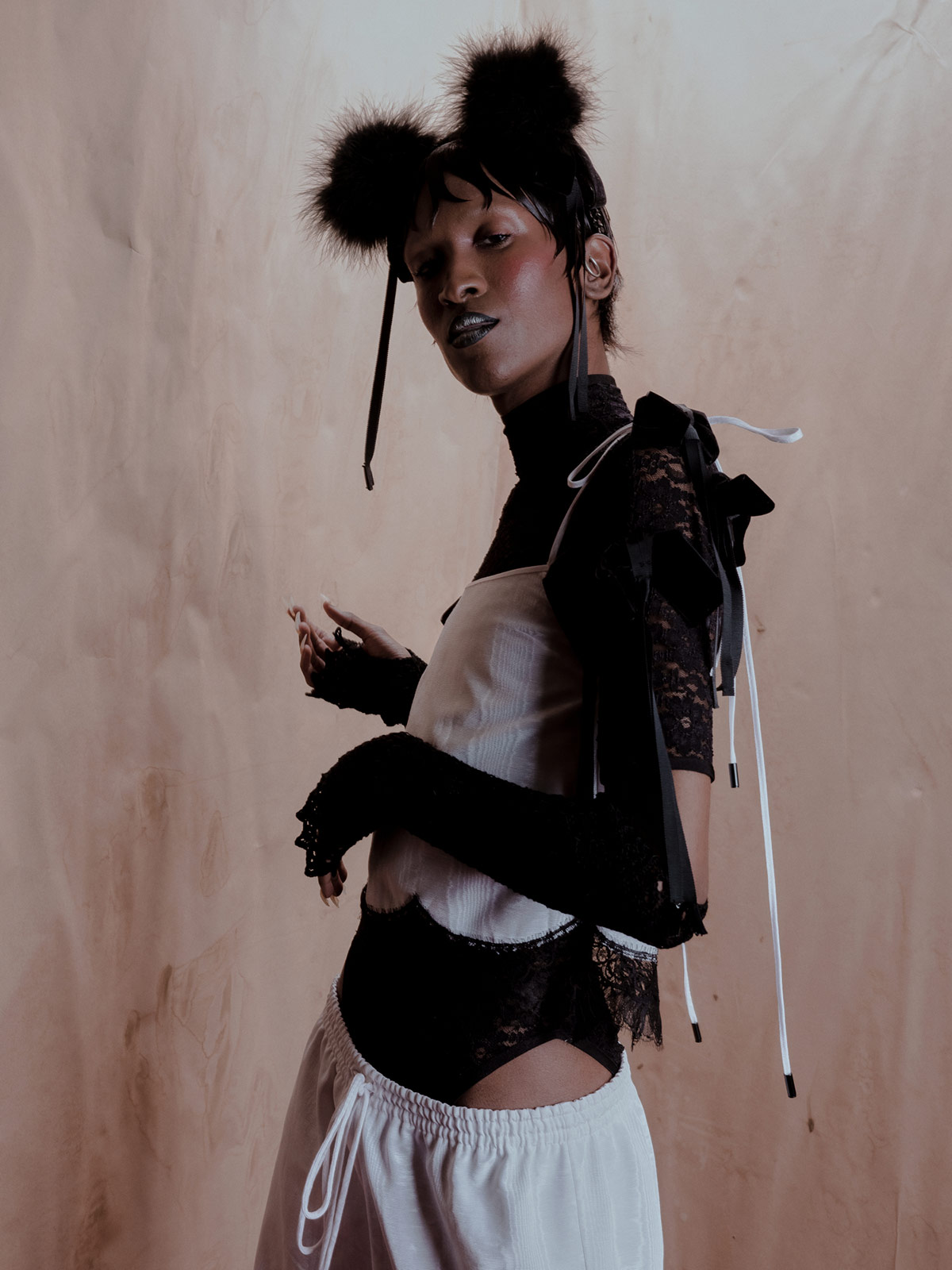 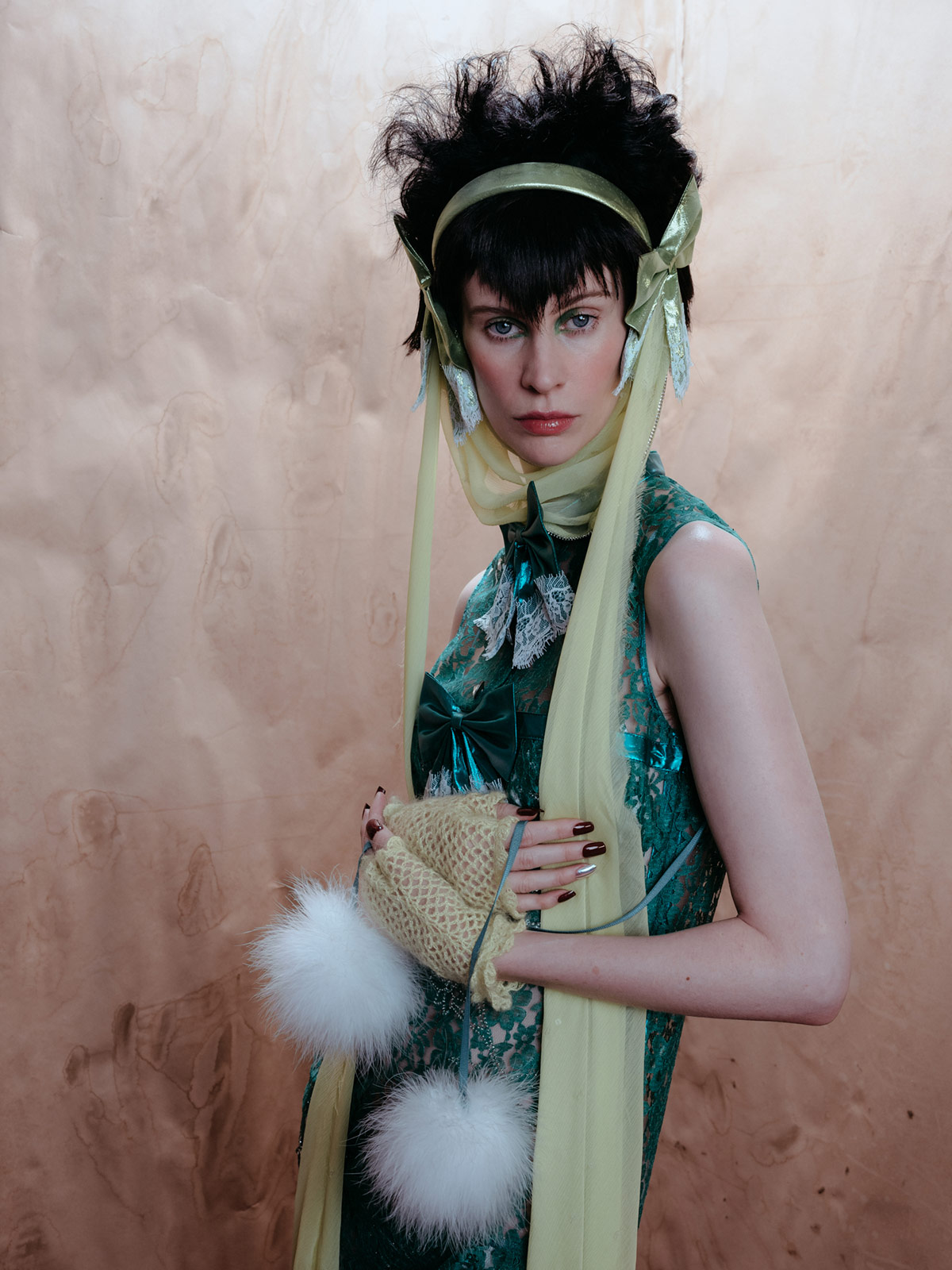 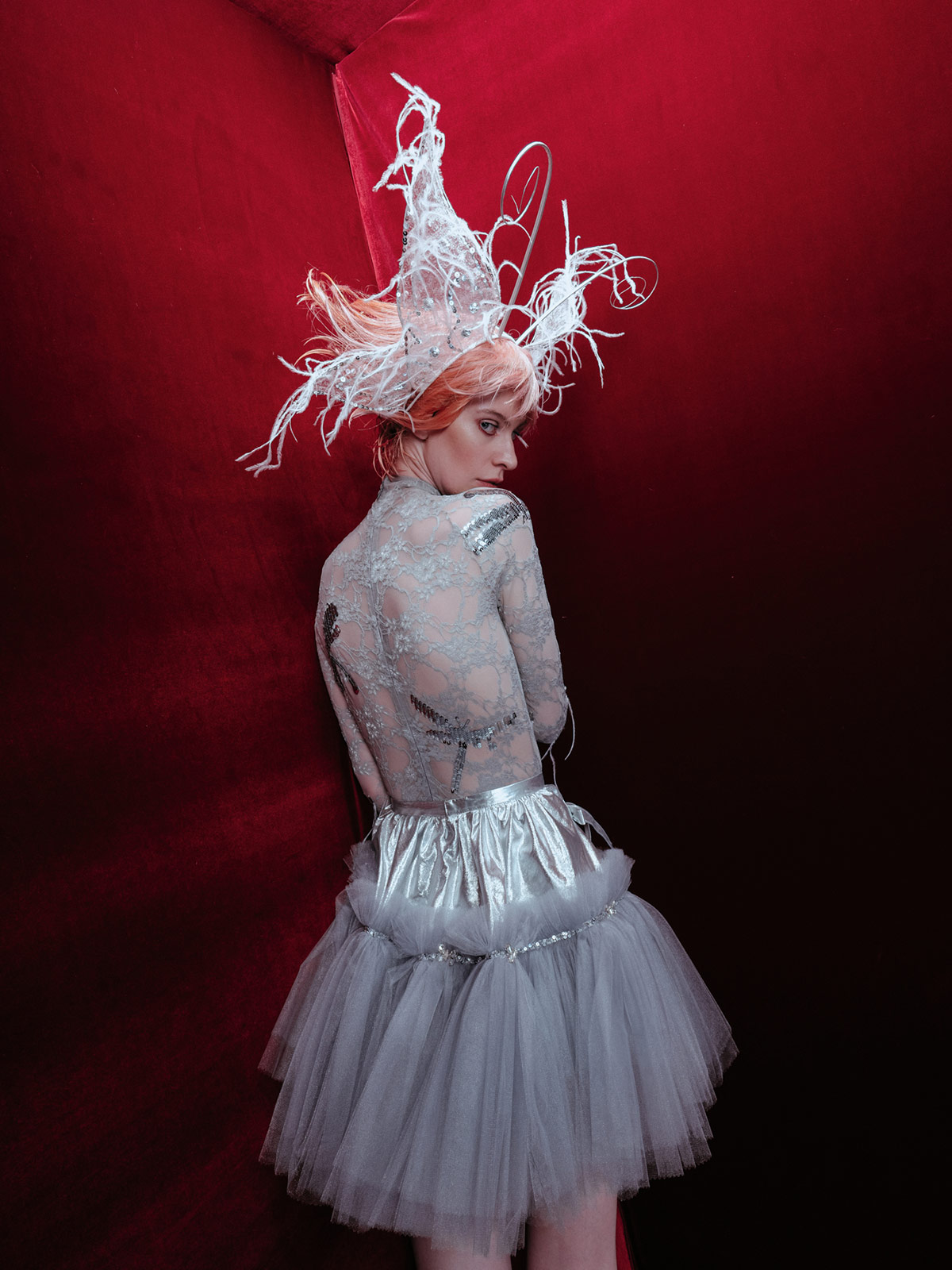 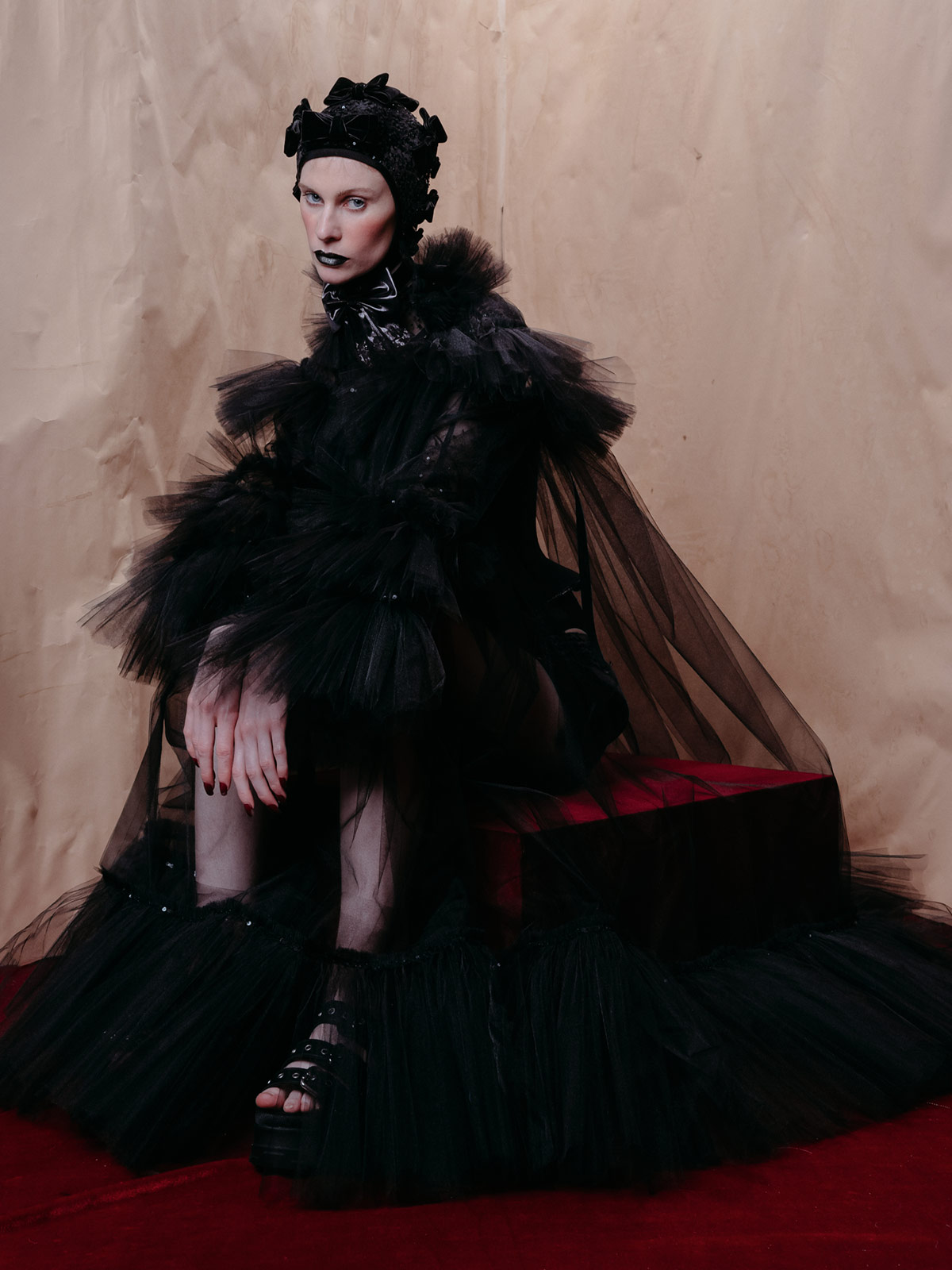