Waking up in a polyphonic land 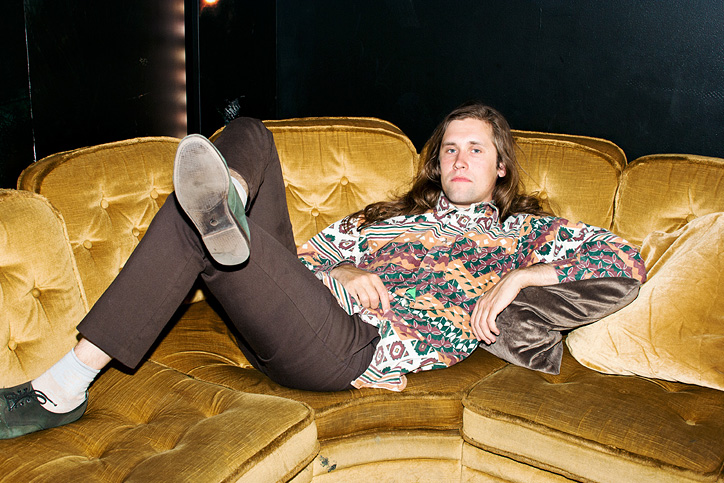 After getting signed by Domino/Weird World and releasing his start-off EP “Dreamzone” at Beggars, Jaakko Eino Kalevi has been pretty much on a non-stop tour. He had produced four records by himself before that. This Berlin-based Finish chap is growing up internationally, the dream is over and he has just waken up with a brand new full-length under his arm. The dreamy vibes are turning into more acid and luscious ones. Behind are the early days supporting live acts such as Ariel Pink or Connan Mockasin. Jaakko’s music is more straightforward than that –more subtle, minimal and disco jazz oriented, if you allow me. His self-titled new full-length was released in June, and it is acquiring a great response, so does his new tour: keep your eyes peeled around the east and west coast in the U.S, several dates are settled for the entire summer around Europe and then Australia and China for the following fall.

Please tell me about your new full-length.

It is kind of similar to the Dreamzone vibe. It came out only a few weeks ago, in June.

Have you used any of your earlier songs in the production of this album?

No, it’s all new songs but some parts, for instance a bassline in one song, are from an old hip hop beat I did in 2004 or something. So some bits can be older, but all the songs are brand new.

Do you work in a DYI way only or do you need a bigger recording studio?

I work at home mostly, but I call our practice place ‘studio’, so basically everything is recorded between these two places. But then I moved to Berlin and recorded some synths parts there, as well. Then I mixed the record with Nicolas Vernhes in New York, we added some parts, like some synthesizers and vocal techs. I had a saxophonist and two guest vocalists, Suad Khalifa and Sonja Immonen, who had already played with me in and old song called Poison. I really wanted to have a mixing guy from the outside. The record label had some options in mind and when I checked Nicolas’ work I really liked his sound, I think we share some kind of taste. He has worked with artists such as Fischerspooner, The DFA, Dominique A, Spoon or The War on Drugs more recently.

I think in the last three years there have been a lot of live performances for you.

I guess reaching this point has demanded a lot of energy.

It seems like this album is a much bigger thing than the Dreamzone EP. I think most of the songs I’ve been working on occurred to me in the past three years. Last year it was kind of busy, I did my first tour ever (laughs). It was fun, we went to places like Iceland and Japan; but it was kind of rough as well, for example on this tour it’s been only morning flights and you play very late and then the next morning you have to catch that flight at 9 am, which means waking up about 3 hours earlier. But it’s still fun.

How does it feel to work on a label like Domino?

Feels good. I’ve been used to work alone in a small scale and now I’m working with quite many other people. But it works; I can trust them. They all live in London.

Well, we’ve known each other for a while and I’m thinking it is funny that you used to drive a tram in Helsinki. If you look back, would you imagine yourself making music for a living?

I think I’ve been a little bit romantic with the job because I miss it a little bit (laughs). Also, at the same time I know that it was kind of frustrating, but somehow it was a balancing thing for the music career as well, striving to make this happen. I knew there was a possibility to make music and not to drive the tram, and I also wanted to have this experience of living somewhere else than in Finland because if I was there, I would still be driving the tram. Now I am able to focus on music, no need of day jobs.

Bottom line, I guess you could always go back and drive the tram whilst listening to your records.

Recently Geoff Barrow from Portishead twitted a sarcastic snap thanking iTunes, Spotify and such for a “34,000,000 streams Income After tax = £1700”. Apple launched Apple Music. Do you think artists can relay on editorial and music distribution revenues nowadays or is it more about focusing on the performance?

I really hope the system with Spotify will change. Although I don’t really pay attention; I have no idea if I get money from them (laughs). I should be more conscious about that. The label, they just manage that side, how it’s distributed. I trust these people; they’re doing their best, for my perspective as well.

One more question. Last time we met in Copenhagen at the Henrik Vibskov’s afterparty where you were playing, Henrik was so in love with your music. Since he has always had these great ideas, is there any new collaboration in the making?

Last time he dressed up for this one time show in Copenhagen for a big radio station at Koncerthuset. But we have a project which I’ve been planning for a long time with a Japanese painter: the idea is that I play music and he paints what he hears, we’ll print it into a fabric and then Vibskov will design a suit with it.

Yeah exactly, ready-made suits (more laughs). We were planning to take it a bit further actually, and make some other art and transfer that suit into food for example. The whole concept is to transfer the same inspiration from music to painting, from painting into fabric and so on and so forth.