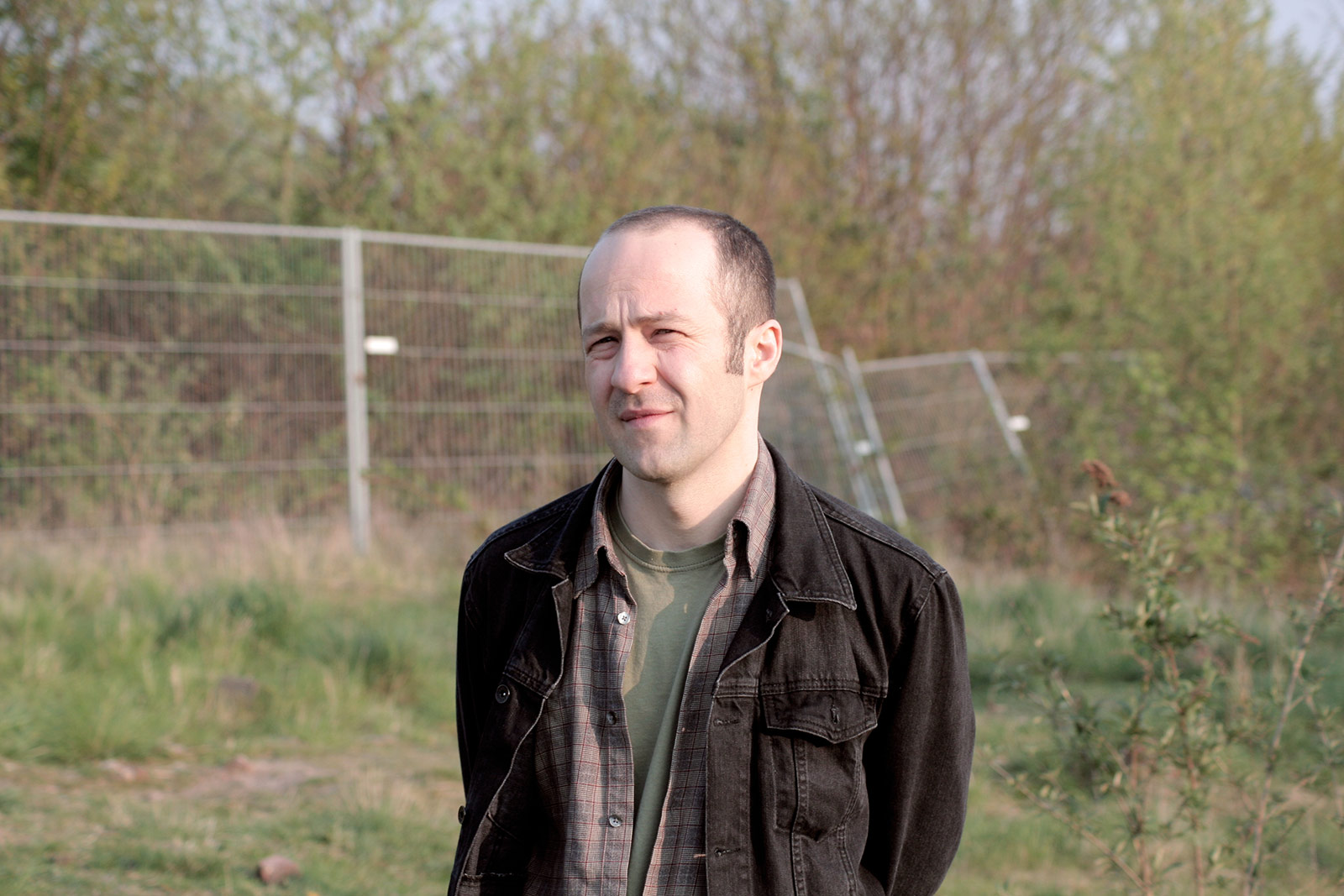 Irakli Bugiani is a Düsseldorf-based Georgian Artist. He portrays memories, soviet traumas, and effects of the totalitarian regime through his paintings. The melancholic colours of soviet architecture, highlighting saddening physical and mental condition of soviet generations clearly symbolize how oppressed and threatened people were in those times. Even though the soviet-formed generations have almost faded, the consequences are still present but definitely on their way to vanish forever. 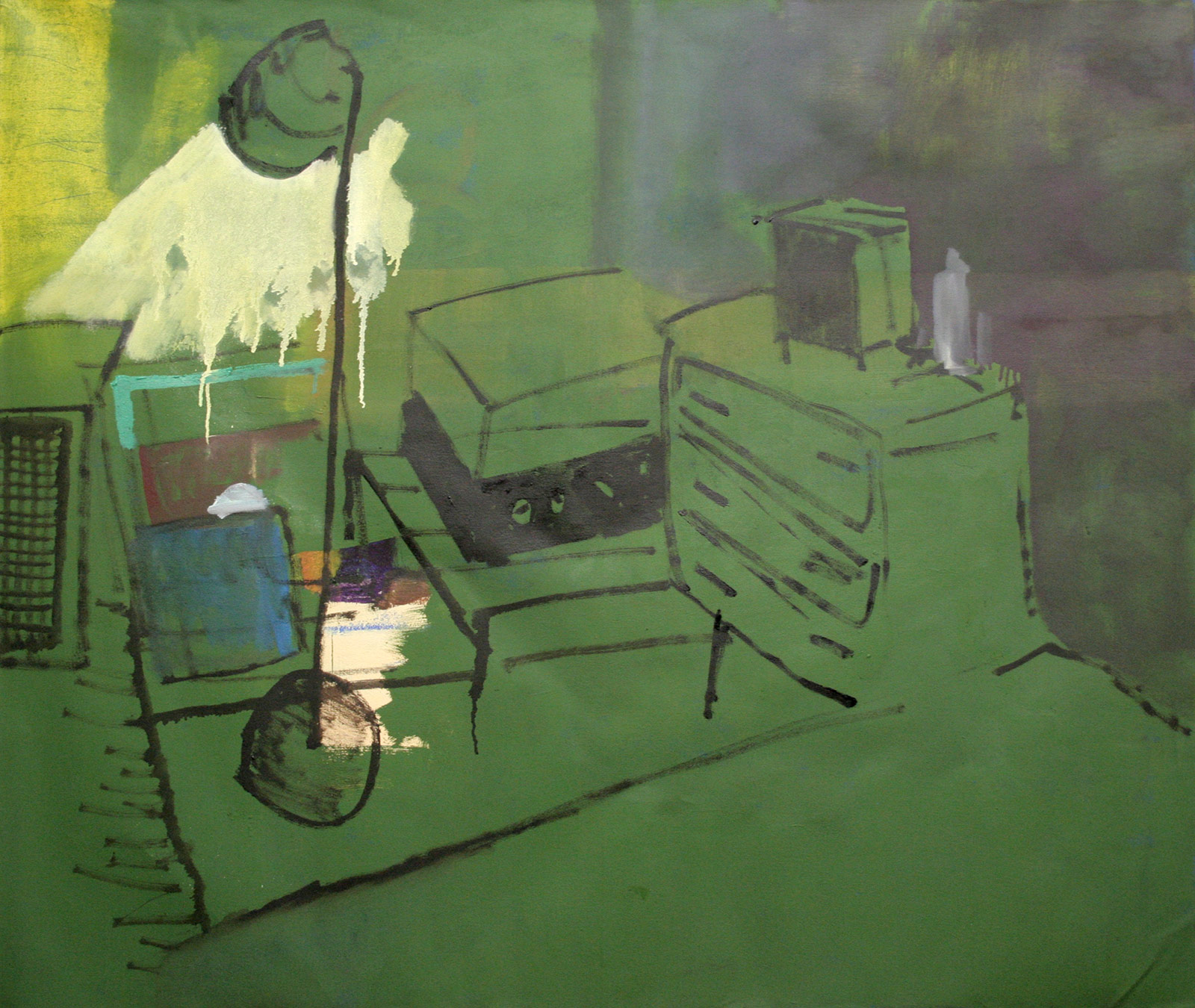 How did you start painting?
I am told that when I was two years old I was saying that I wanted to be a painter, and I seemed pretty serious about it. In my teenage years I stopped painting for two years but then I got accepted in the Academy of Arts in Tbilisi, Georgia, and in 2001 I moved to Germany to continue my studies. Except those two years I can’t think of a moment without a brush in my hand. The best pieces of art for me are the ones painted by children. Their paintings are amazing, free, unframed and pure. Artists of my age base their art mostly on the worldview and gathered experiences. This somehow puts their thinking into the frame and as a result the pieces are not as frank as the children’s ones. I am working with kids myself and they amaze me all the time; we learn from each other.
What role do memories play in your art? Which ones are the most precious?
Humans can’t live without memories. Memories and, generally, the fantasies coming out of the mind play a big role in my art. Daydreaming is also a very important source of inspiration for me. I think that we, humans, are the consequences of the events that happened through our lives. When I think of my youth I perceive myself as a different person, like a character of a story; but it was me then and it is me now, meaning that everything from the past forms what you become in the present. As for precious memories, I think there were many and I was portraying them in my 2008-2009 series. Although there’s one that comes often to my mind, which is about my early childhood years when my family lived in Syria for a time. These moments are blurred but it makes much artistic sense to me.
You’ve been living in Germany for a long time now. Do you ever get nostalgic?
I consider myself pretty nostalgic and in German there is a word for it: ‘Fernweh’ – the wanderlust, the longing, which explains my way of nostalgia. I sometimes get nostalgic of the places I’ve never been to. 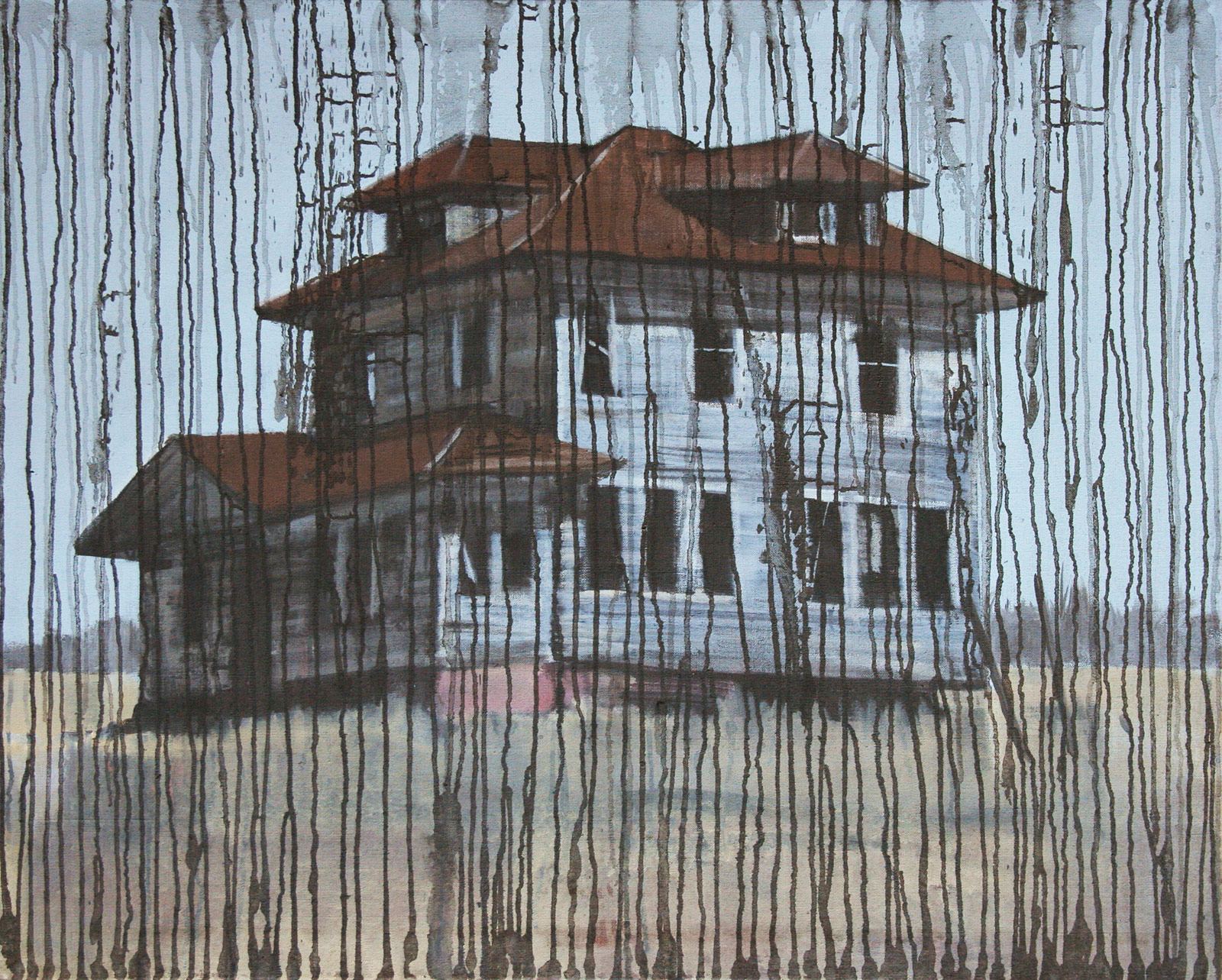 In your series Sovieticum you concentrate on brutalist soviet architecture. What do these buildings symbolize and how did they influence people?
Architectural building is like a sculpture that you can enter; it is a form of art, and art has a great influence on people and their mood. Culture and environment shape humans, so when you live in a system – be it soviet, capitalist or any other – you unconsciously become part of it. Architecture wise I personally think that soviet brutalist buildings are authentic and impressive. They symbolize soviet regime really well.
One piece of yours depicts a monument of the soviet dictator. What did the monuments of the rulers highlight?
During the soviet art period, cinema and culture in general were used as a tool for propaganda. Artists were limited and oppressed, but in my opinion this kind of attitude helped art in a way; it became more rebellious, interesting, mystical, symbolic and differently interpreted.
As for the monuments, they are representations of every regime, not necessarily the Soviet; the same was happening in Germany during Nazism. But it still happens in today’s democracy. If some decades ago the propaganda was spread through oppressed culture, soviet symbols, sculptures, etc., today we see billboards with advertisements, journals, newspapers and television programmes that set specific standards on how a person should look like, think, behave, dress or breathe. Every regime has their own tools for influencing, brainwashing, threatening and dominating people; placing monuments of the dictators was one of those tools. When looking at an enormous statue you kind of belittle and get filled with fear.
How did the soviet regime influence several generations?
I think the soviet-formed generations have almost faded. I was only ten years old myself when the regime collapsed but I remember most of the events. The consequences of the brutal system stayed for a very long time in people’s minds, but as I mentioned before, it is disappearing. The worst thing that the soviet period did to humans, in my opinion, is having deprived them the ability to live independently: they took away their personal initiative, meaning that everything was ready-made in advance, the pace of life was already structured. People were not poor at the time, they had jobs, they had equal salary, they had food but they were mentally oppressed, living in a constant propaganda and a lie. There was no room left for self-development and self-realization.
Something that was working like a clock suddenly vanished and everything that people were accustomed to disappeared. The soviet generations struggled between past and present and it was definitely a very tough reality for them. 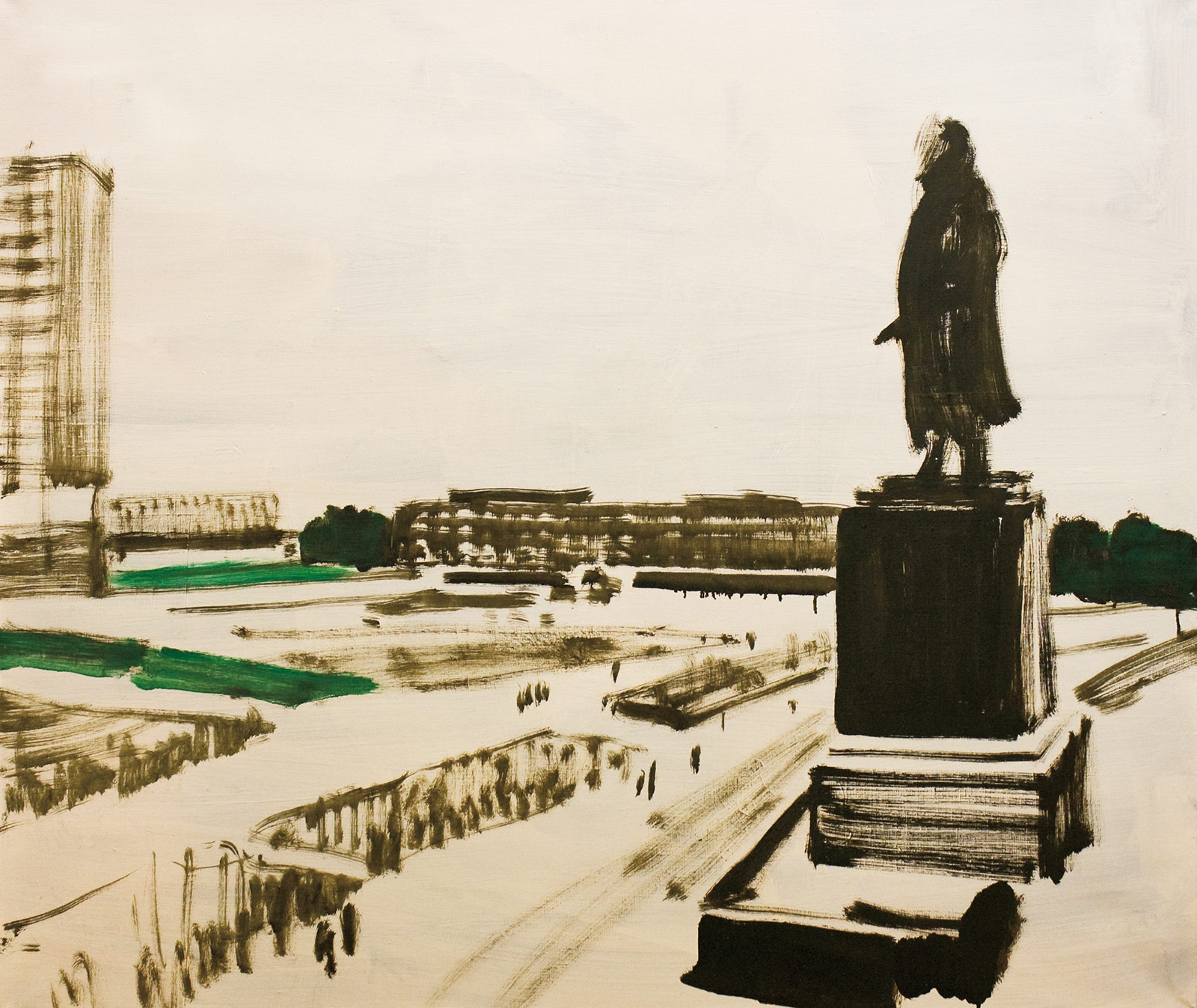 Abandoned houses are another prominent topic in your art and paintings. What were you trying to interpret?
The paintings with abandoned houses are from my old series. I painted them in 2008 after I finished the art academy in Germany. Empty homes standing in the middle of nowhere seemed creepy and, at the same time, interesting to me. I tried to explore why people put so much energy in building houses, which they abandon after a while.
Another piece of yours, within the project -191°S, totally falls out of your regular painting style. What happened?
My friends and I organized an art project, called -191°S, that took place at a club called Salon des amateurs in Düsseldorf. Every two months different artists would paint things on the wall. An enlarged part of a car painted from an axonometric angle by me was part of this project, and I tried to artistically fall in line with the music played there.
What are you working on now?
Recently, I had an exhibition in Tbilisi, and for several months after this exhibition, I did not paint intensively. Now I am back in my studio in Düsseldorf and am working on oil canvas paintings. I don’t know what might come out of it; things change during the working process but we’ll see. 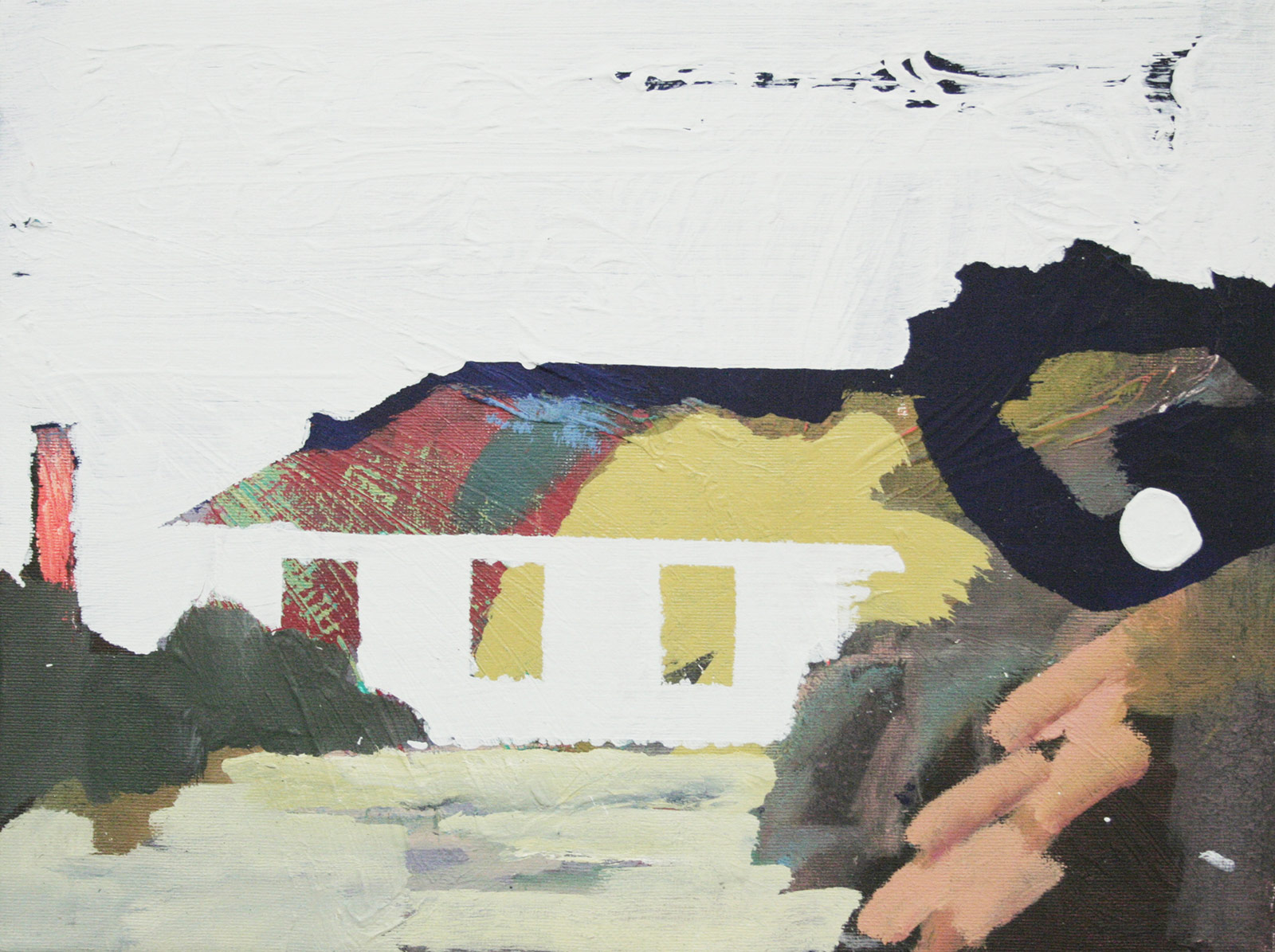 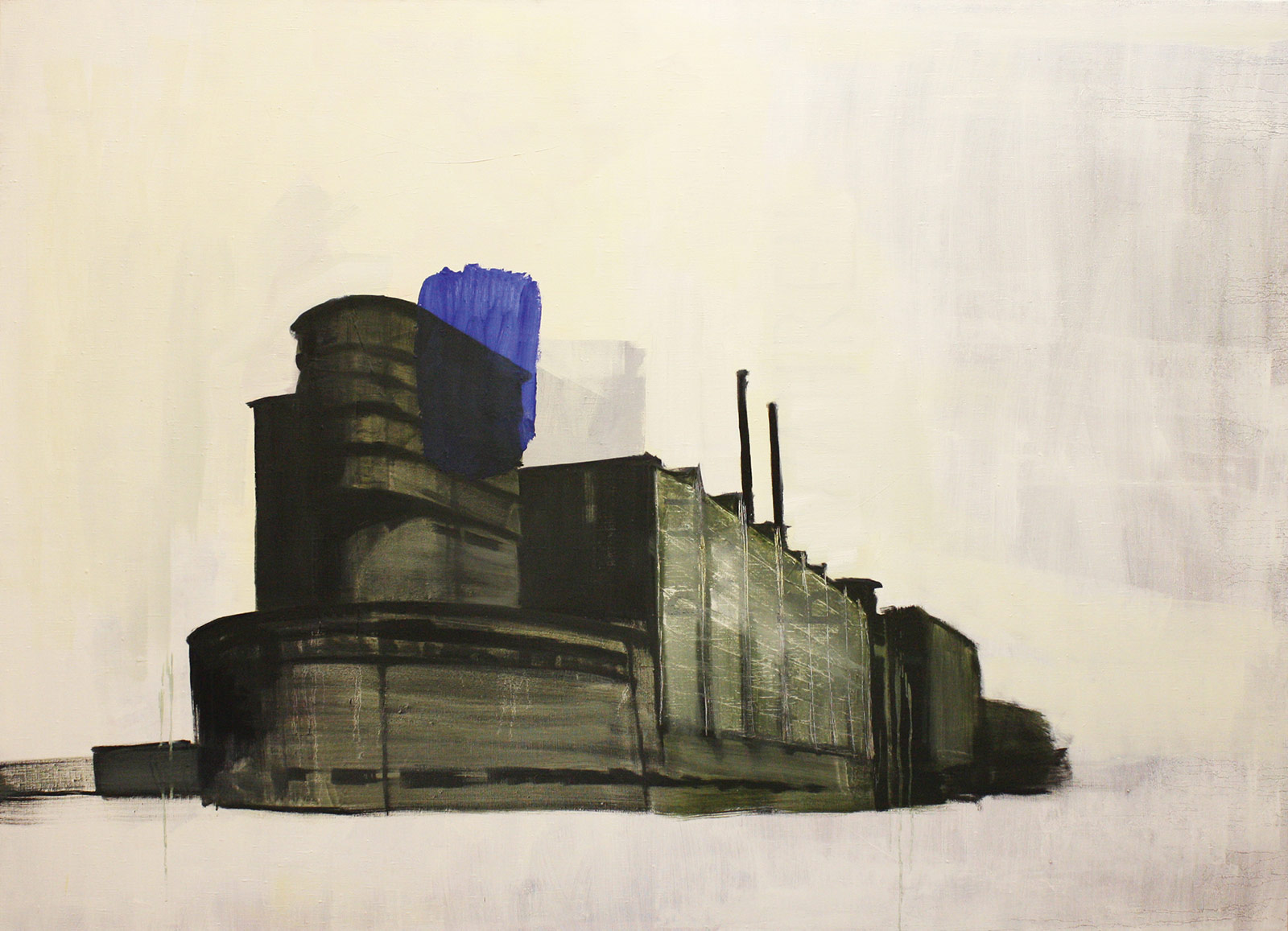 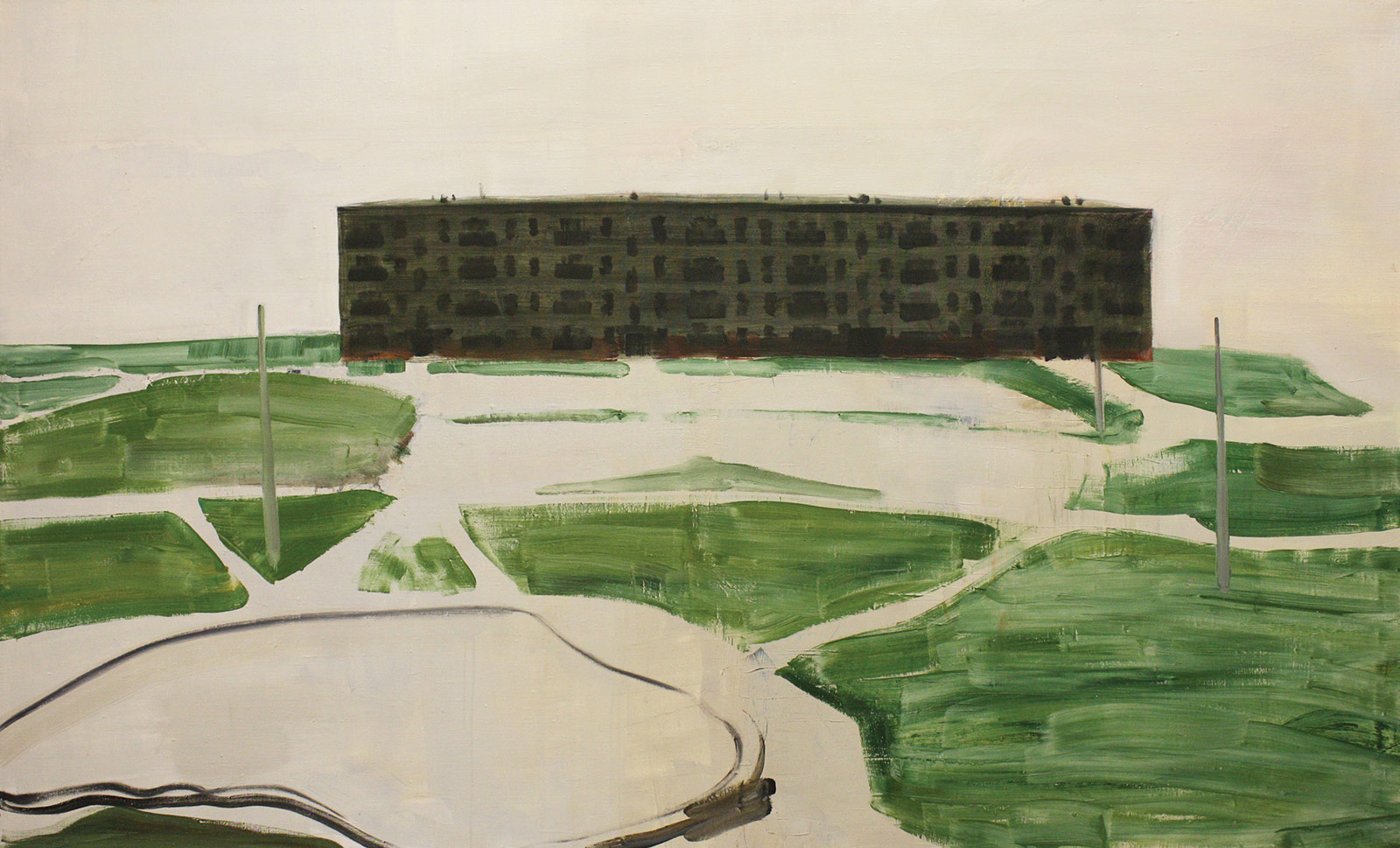 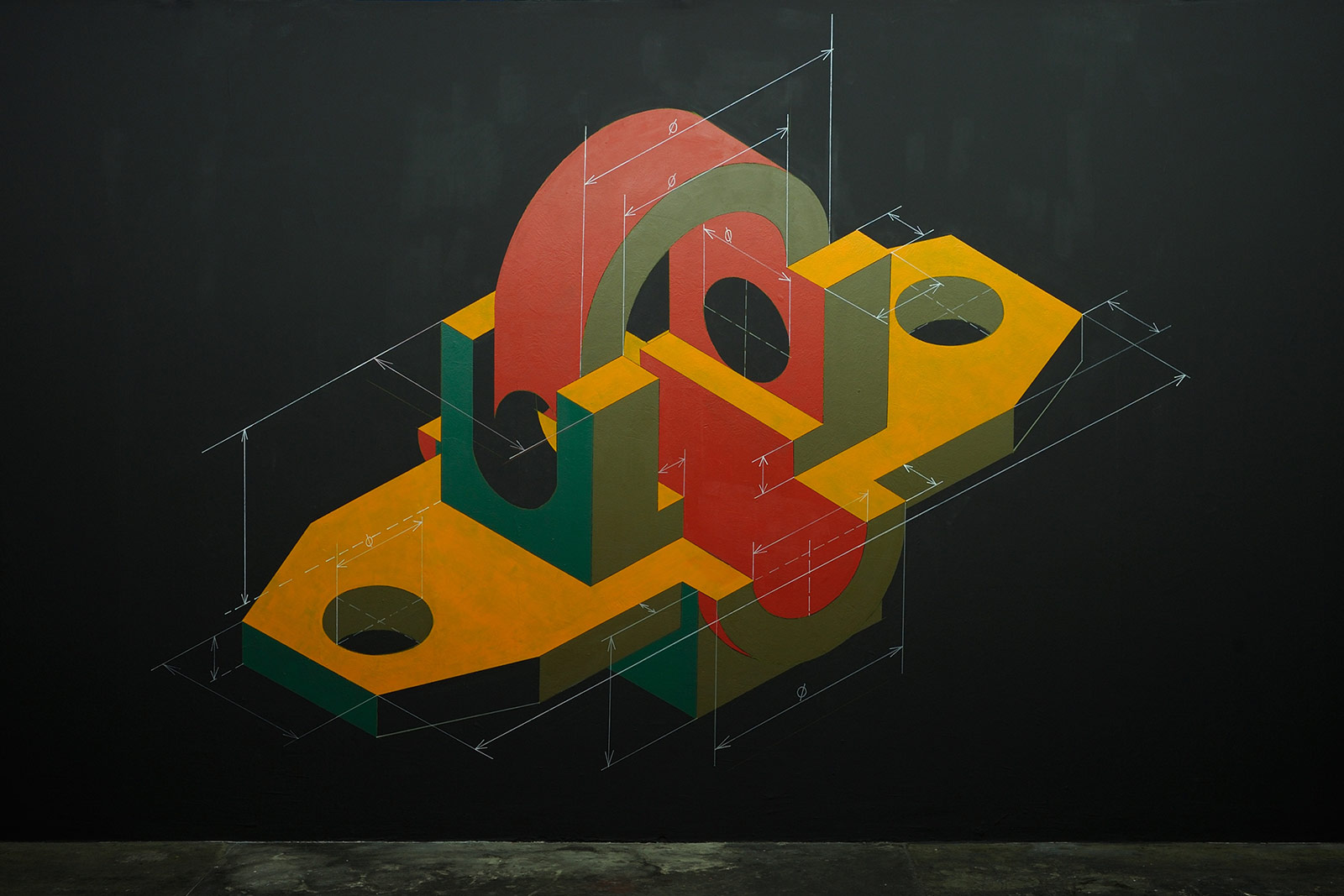 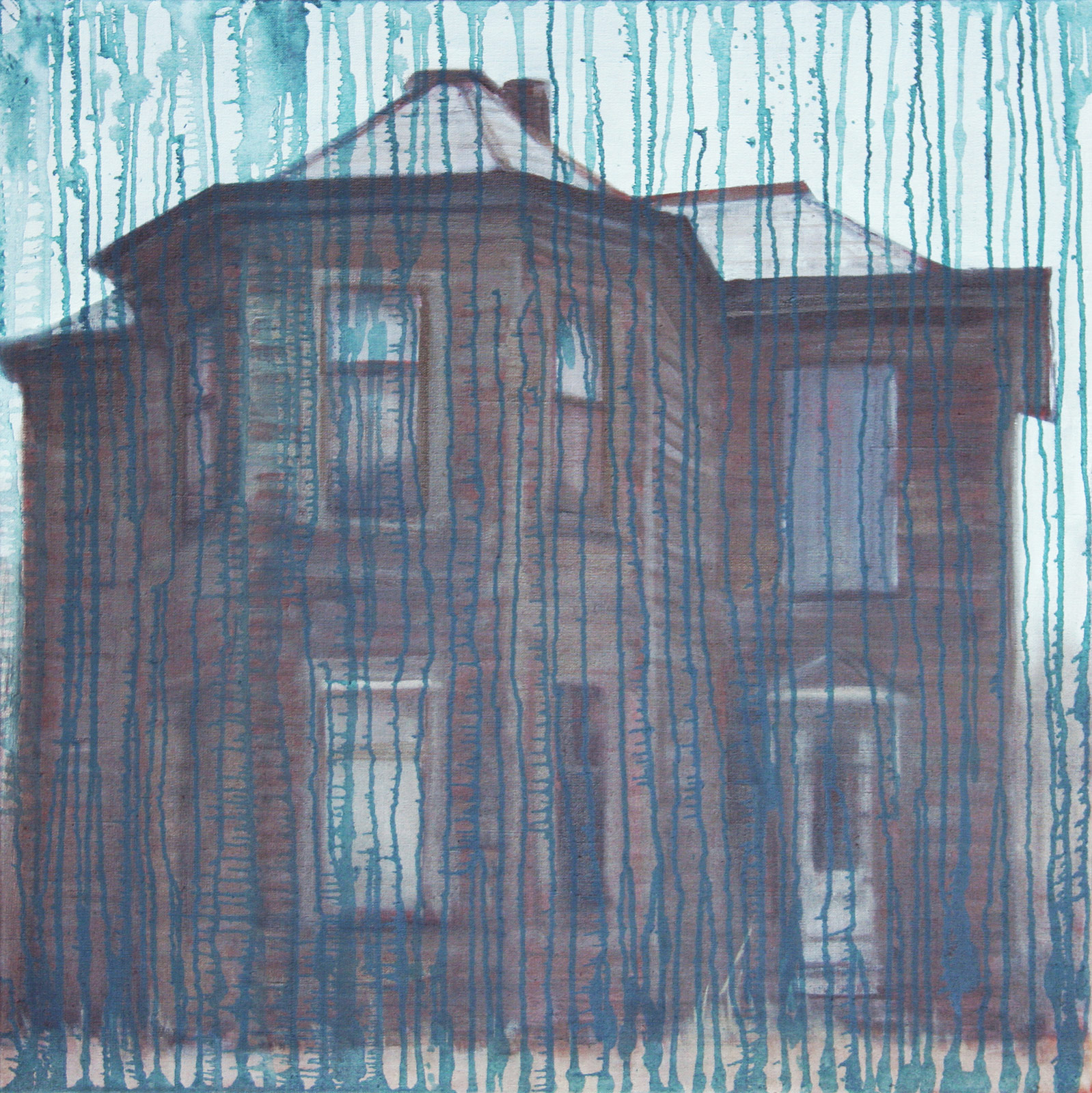 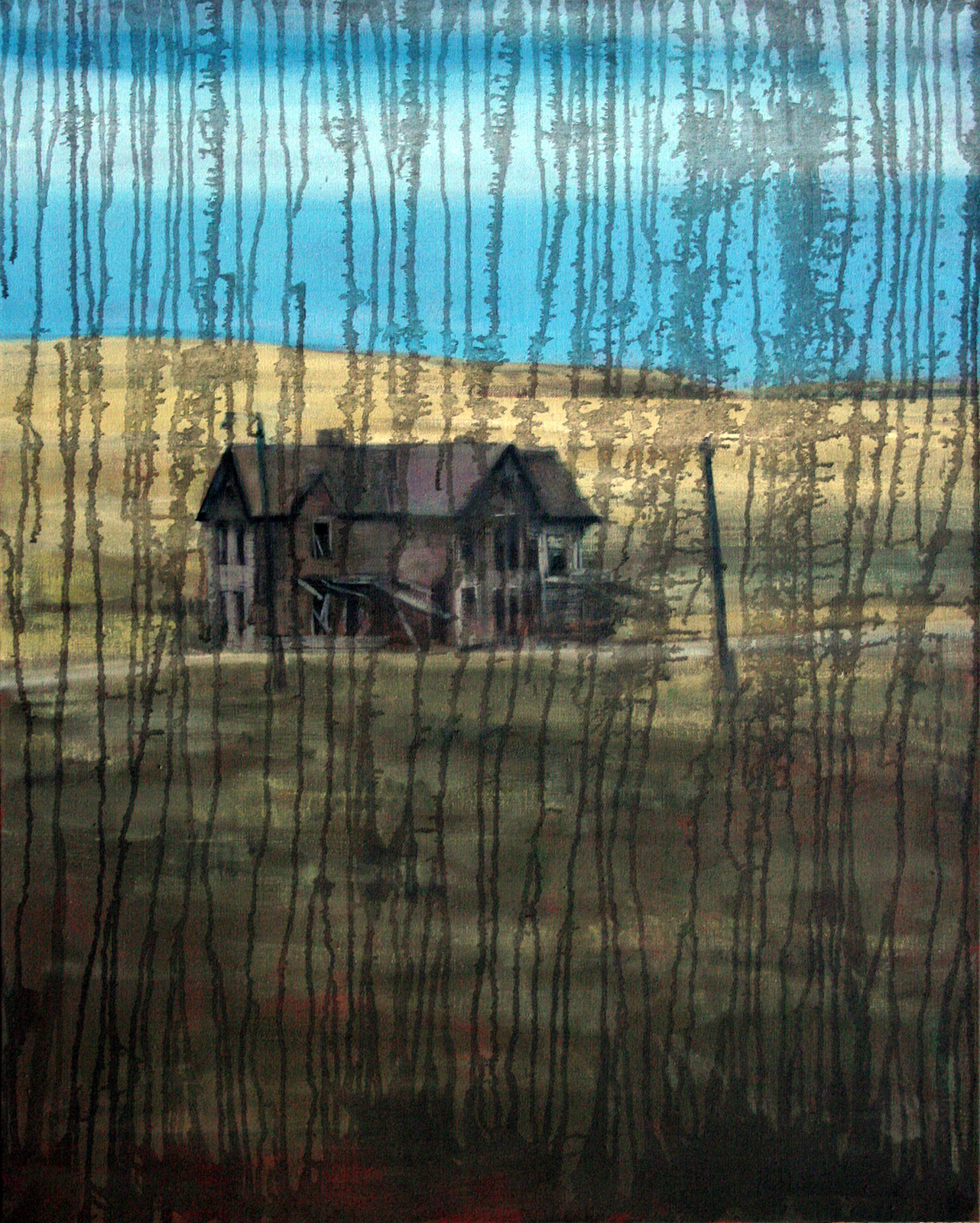 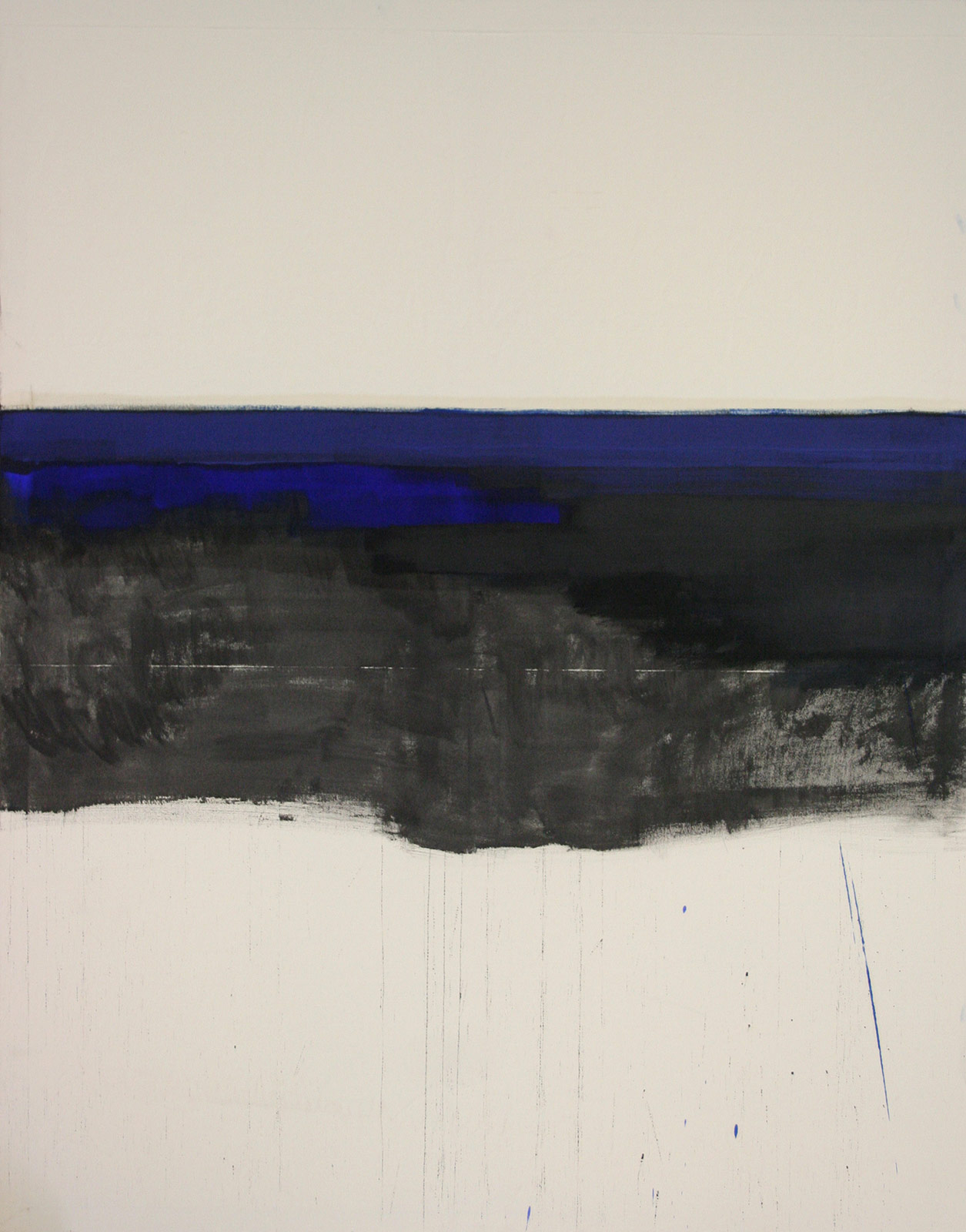 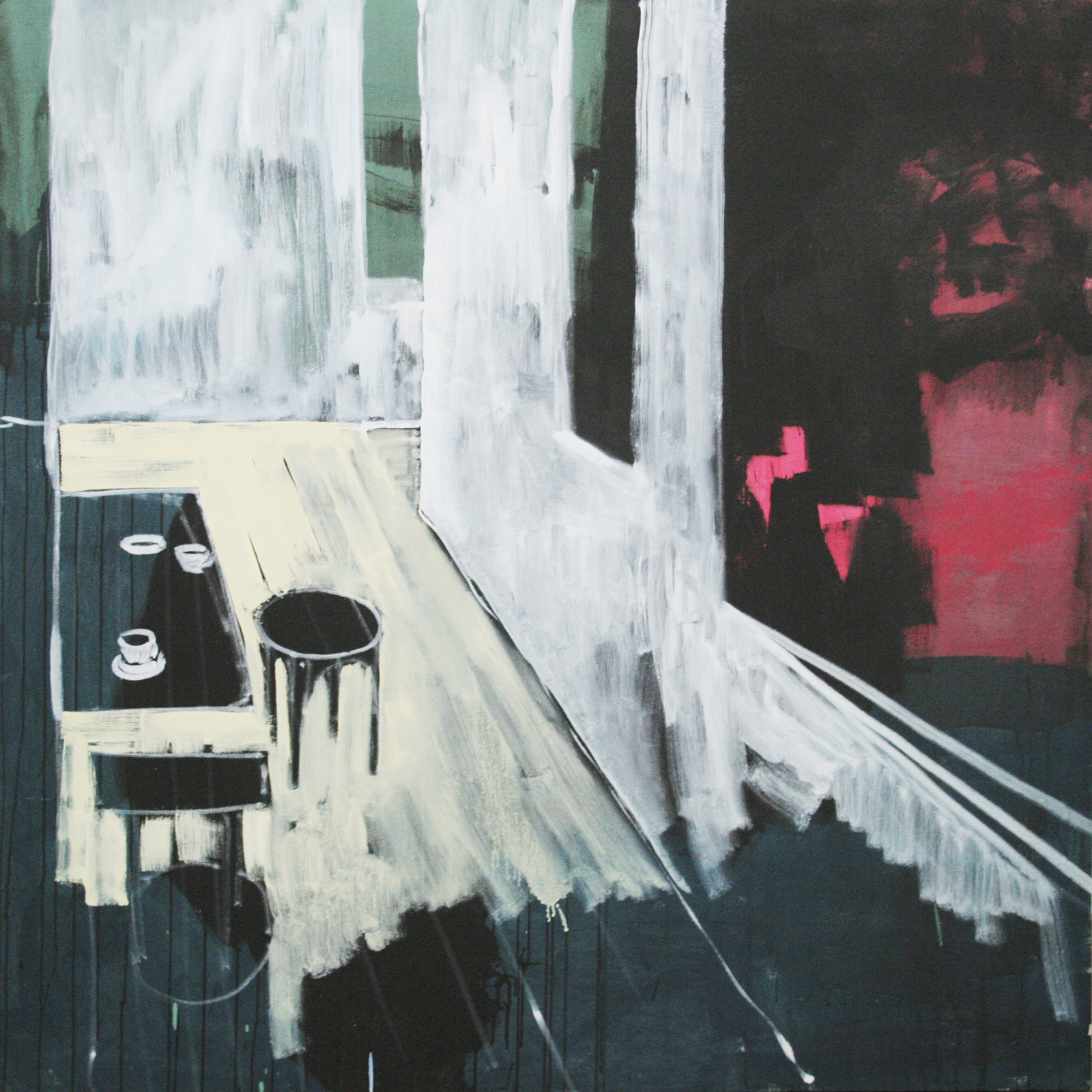 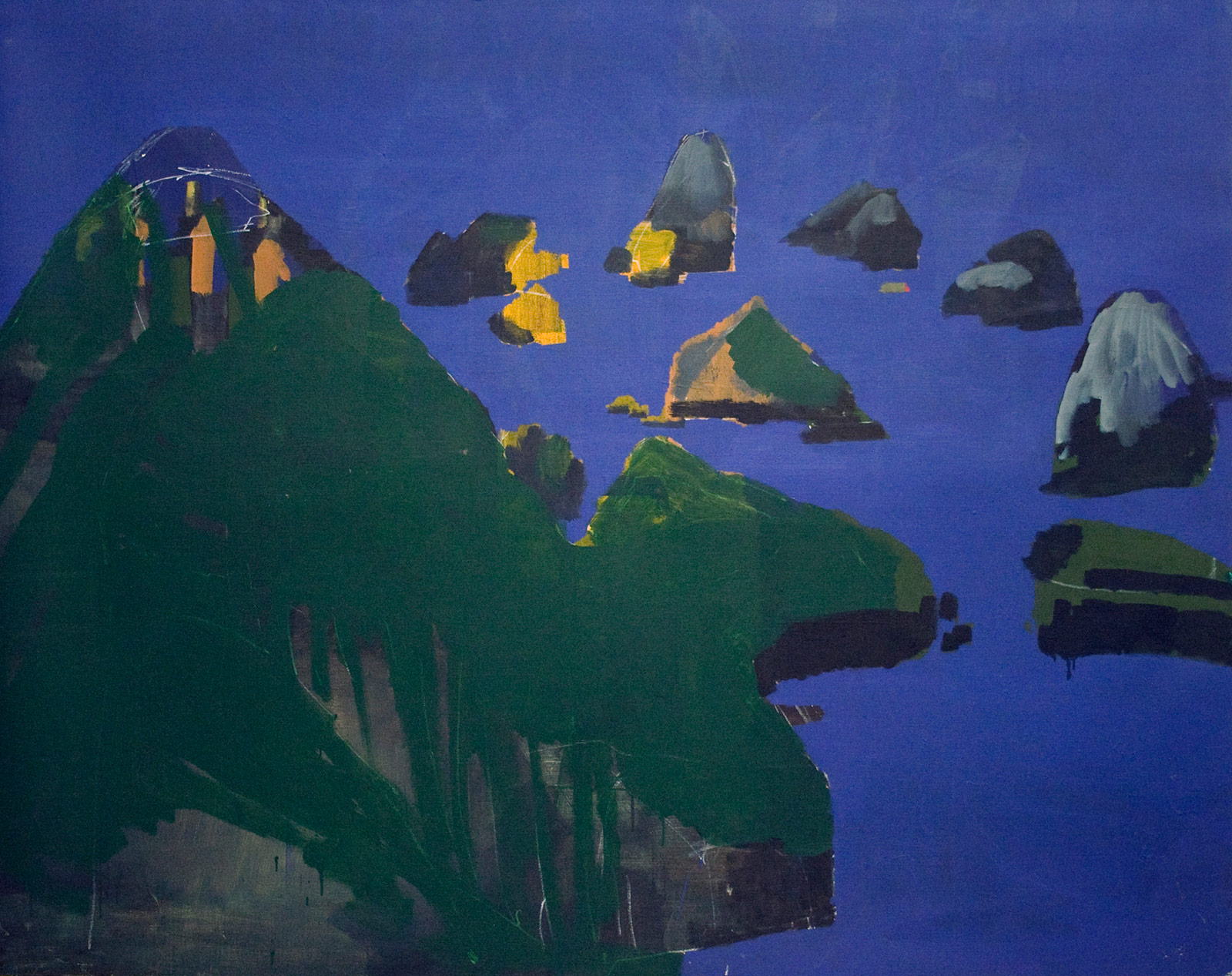 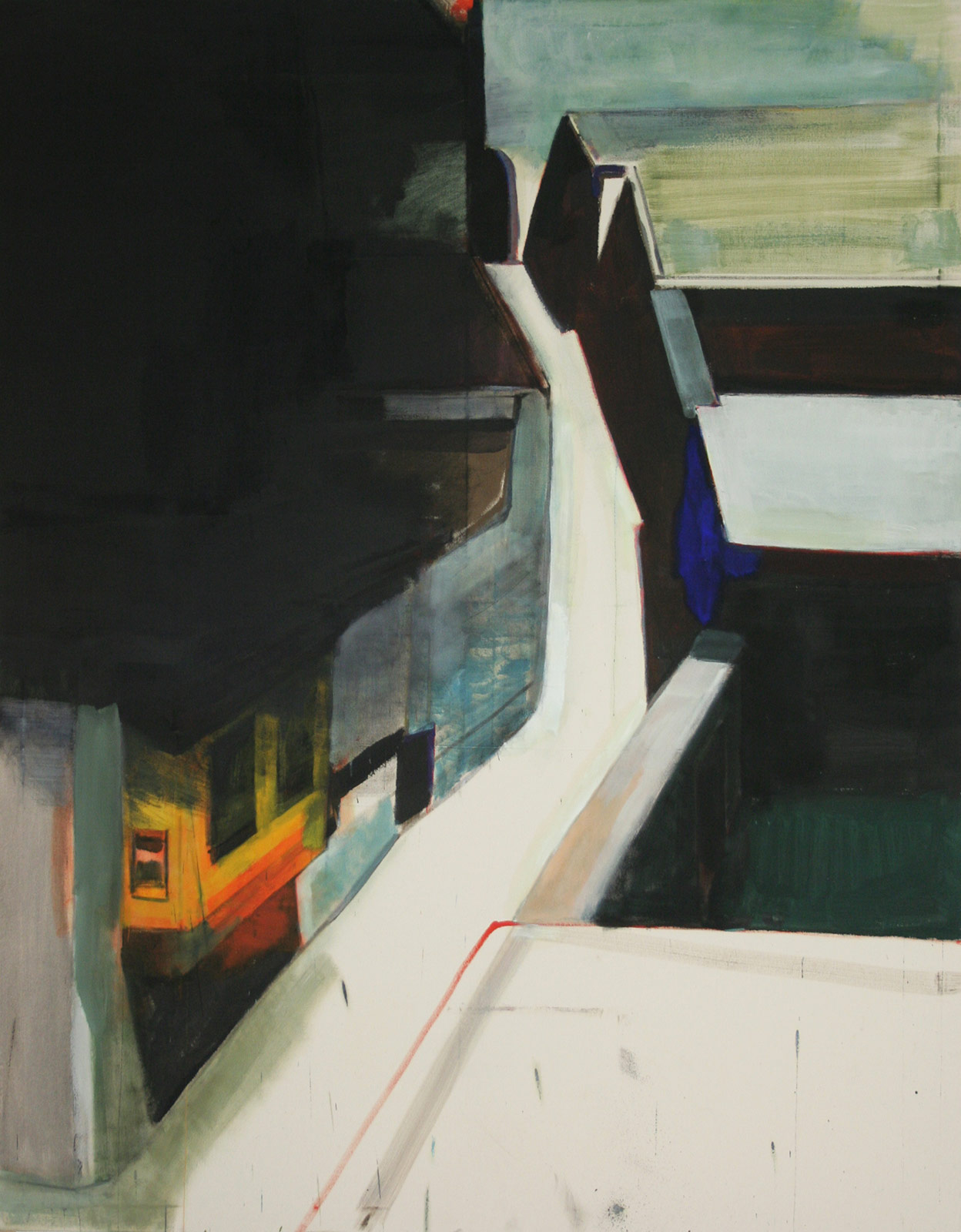