Exploring depth of self 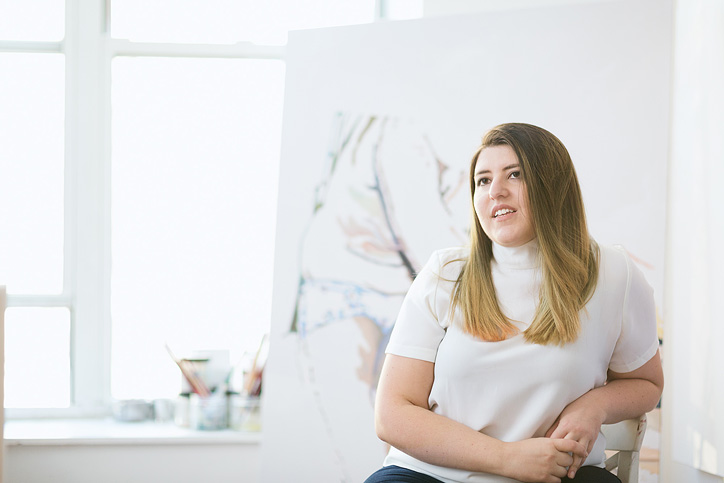 Ilana Savdie is a painter living in East Williamsburg; she invites you into a conversation full of depth, self-questioning and exploration. I found her open- conversation with me to be an exciting emergence among what usually is submerged, publicly. And as a writer, I could become that of a fly on the wall, while Ilana took a truthful journey of herself, opinions and her body of work. In a coded and abstract way, her work reflects thoughts and topic-themes are important to discuss. Savdie's paintings are pieces that belong only where one appreciates the process of artists who take their time inserting efforts and craftsmanship, that on some scale seems to have fallen away from today's art world.

What got you into art, painting and everything?

Well, it's definitely something I've been doing. My whole life I was drawing and talking, and then I started painting the way I do when I was at school at RISD. I had an oil painting class and I started working bigger and bigger and I couldn't really stop myself from scaling so it just evolved.

There's definitely a lot of it. I definitely use the digital as a vocabulary for painting. A lot of it came from when I moved to New York and really didn't have any real tangible jobs. It was all just a big nebula in the land of retouching and design. It ended up becoming the way that I sketch. The way that I sketch is essentially all digital, so it almost all comes from PhotoShop accidents. I guess I can't put my finger on what it actually is; it's more so how it was born.

Do you find yourself involved in the art world of New York - like the topical scene - or do you stay more to yourself?

I don't really do anything as a rule. I guess it's something I decided in my career of painting - well, I slowed painting down when I was working for Bib + Tuck. I started working for a tech startup which takes up so much of your time, especially when your painting-hours are spent in a little incubator. So it was really hard to participate in everything as an emerging artist, which is probably the case for a lot of people. I spend most of the time I can making work - especially when I moved to Brooklyn seeing how everything here is always vibrating - but it's hard to have a full-time job and create. I have a really close group of friends that really inspire me, and they're really involved in the scene here. But I still don't know how to pinpoint where my place and work is within it. It's still evolving.

You worked at Bib + Tuck as the Creative Director, so what was the dynamic like of being an artist while also having a career?

I guess my painting has always had the same approach as my job. I treat it (painting) as an equal job. I've always been a believer that while you live like an artist, you definitely also have to give yourself deadlines and responsibilities. Things have to get done, you know? And it's been incredibly helpful to have a full-time job because it structured me. I'm not a very structured person otherwise. Bib + Tuck was definitely a place that forced creativity out of me every single day. It did a lot to make me so much more resilient. Besides the fact that it took a lot more of my time from painting, it still was something that helped shape me.

So they say for writers it's good to read a lot. I don't believe it because I don't read - even though I know I should [Both laugh] - but, as an artist, do you feel it's important to follow up on what other artists are doing or do you think it's better to come from the unknown?

I'm sure it's different. There are some people that are hidden in their studios producing great work, having never really seen anything - maybe that's much more pure. That's definitely not the way I am. I'm completely inspired by seeing the work of other artists and seeing what's happening. It's important for me to know what is and isn't saturated at a certain point. One of the biggest struggles I have is not having enough time to see everything, especially here in New York where everything is constant. I do think that's detrimental to my practice so whenever I can, I go to see whatever is going on: everywhere from galleries in Chelsea to pop up shows in Bushwick. There's a lot of important stuff happening so it's good to be present in as much as possible.

So I think there are technical artists and emotion-based artists, and everything in between. Do you feel that your art is driven by different states of emotion or is it more of a technical thought that you had and you're finishing that thought by putting it on a canvas?

I like the way you put that [Laughs]. It's hard to say because I don't think of myself as “fully-cooked”. I don't know. I don't know if I'm much of an emotional artist as I think I am. I definitely look at a piece when it's done and I think about when I made it, and how relevant it is to where I was emotionally at that point, but I would say I'm more. Well, because I paint really large paintings, it's such a slow process that the entire emotional process happens mostly in the digital sketch. That's usually where everything is raw. In the painting part there are a lot less accidents that happen because it's already planned out but it depends on the piece. I don't fully know where I stand and if technicalities and emotions can even ever really be separate.

Well, since it's winter, what does a satisfactory day feel like for you?

I love the days when I don't have to leave my house at all. I love that: when it's so cold that I know no one is out and I'm not missing anything. I guess the other alternative to that, if I'm being productive, is if there's a really great reason to go out to an event where everyone is going to be inside together because it's so cold out.

How important is the influence of people in your life for your art?

So basically for me, one of the most important aspects of my social relationships is part of what happens online which is where most social interactions happen nowadays. I'm mostly interested in the subjectivity of identity and how it relates to social media, and how social media does affect your physical relationships, so I think it's really important. I think it's one of the driving forces behind most of the themes in my work.

Going off of that, what are your thoughts on the world today and accepting social media as a predominant social base, and how we as a society have progressed to that?

It's definitely important to have physical interactions and I haven't fully formed my thoughts on this because I think it's still too new. I think the affects of it may still be too difficult to measure and I'm probably not one of the people who can measure it; but from personal experience I can say that social media is one of the things that keeps people connected when they're not able to be physically connected. It actually can improve your social relationships because they don't gradually fade away like they used to. It does probably change the type of relationship you have with certain people. With some people I know more about them than they know about me and vice versa. I think that's really interesting and leads to people having a more curated identity.

So because your work is influenced by social interactions, what are some of the stories behind your pieces?

I wouldn't really say there's a story. I'm really interested in anxiety, fixation and obsession. I think it's really interesting how memory works, and that ties into social interactions. I can fixate on a certain thing so much that it will tangle up into fragments and become a totally different memory. That's happened to me enough times, being a person who has social anxiety and also being a person who can be really social at the same time. So I probably fixate on things that don't make any sense, sometimes.

So what's the end goal for you as an artist?

I mean, I don't really know how to answer that besides that I don't have another vocabulary. I have nothing else I would do.

What do you want for your future body of work?

I'm not sure exactly where it's going but I'm definitely interested in beauty and the beauty industry. I used to work for Calvin Klein Fragrances, and loved all the images that I got to work with: they were very clean and crisp. I'm trying to find a way to talk about the beauty industry as it relates to female identity, so I'm trying to find a way to talk about it without it being a critique. I'm just really interested in the conversation. I started working with stock photography for a collaboration I'm doing, and playing with these images that we're really accustomed to seeing in society - the ones with crisp white backgrounds - and then I want to manipulate them in a way. I love the idea of pulling the thread of an image and watching it unravel. I feel a little bit confined by the canvas so I'm trying to explore and expand.

So I know you are a strong believer in female empowerment. Do you want to talk about that to finish?

Well, it plays a really strong role. A lot of my work has themes of identity and one of those themes is female identity. You know there are a lot of conversations about gender balance in the art world which I'm not sure I'm equipped to talk about, but as far as the themes of femininity go that's definitely something I want to bring out more with the work that I'm trying to do on "beauty". There are a lot of really intelligent people who hate the word "feminist" and they want to rebrand it. It's kind of a bizarre time. Sometimes I find myself falling into these deep holes from which I come out feeling confused as to how I should express my opinions. I'm surrounded by people who are having really impactful and strong conversations about it (feminism) when it comes to their work, so I'm really proud to be a part of that in whatever way I can. 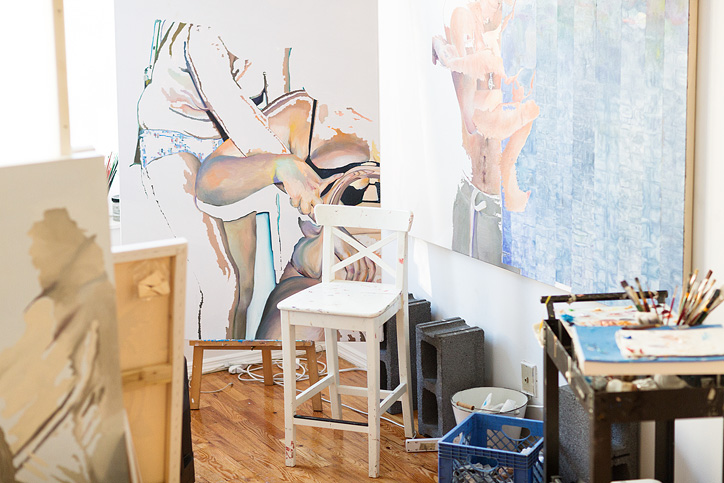 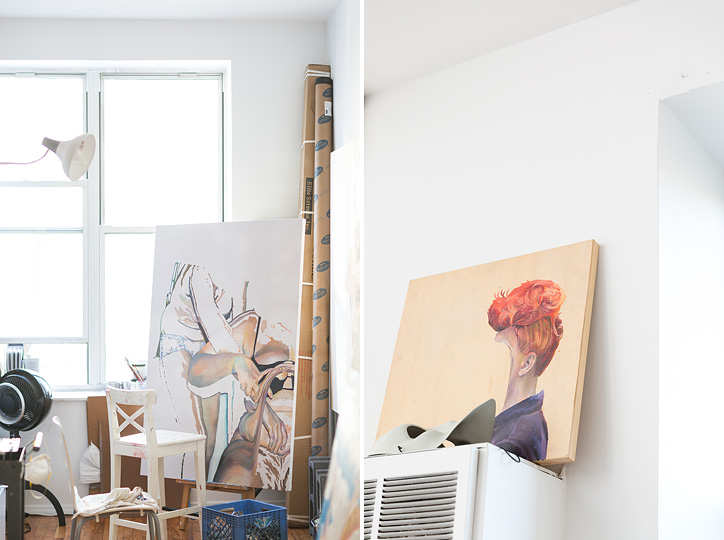 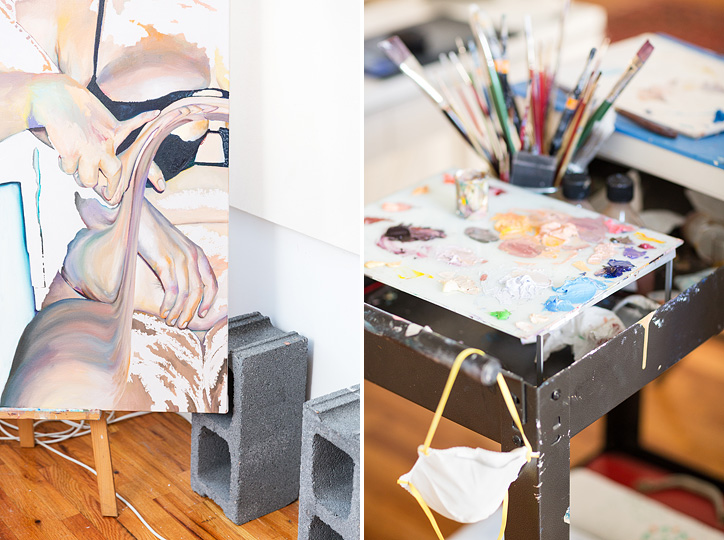 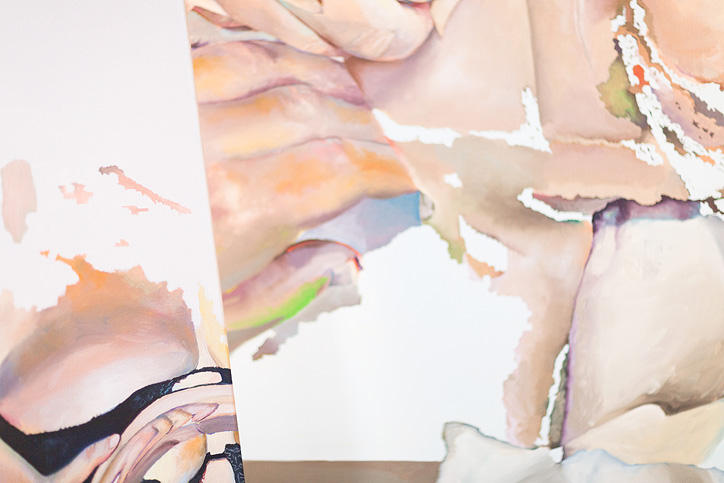