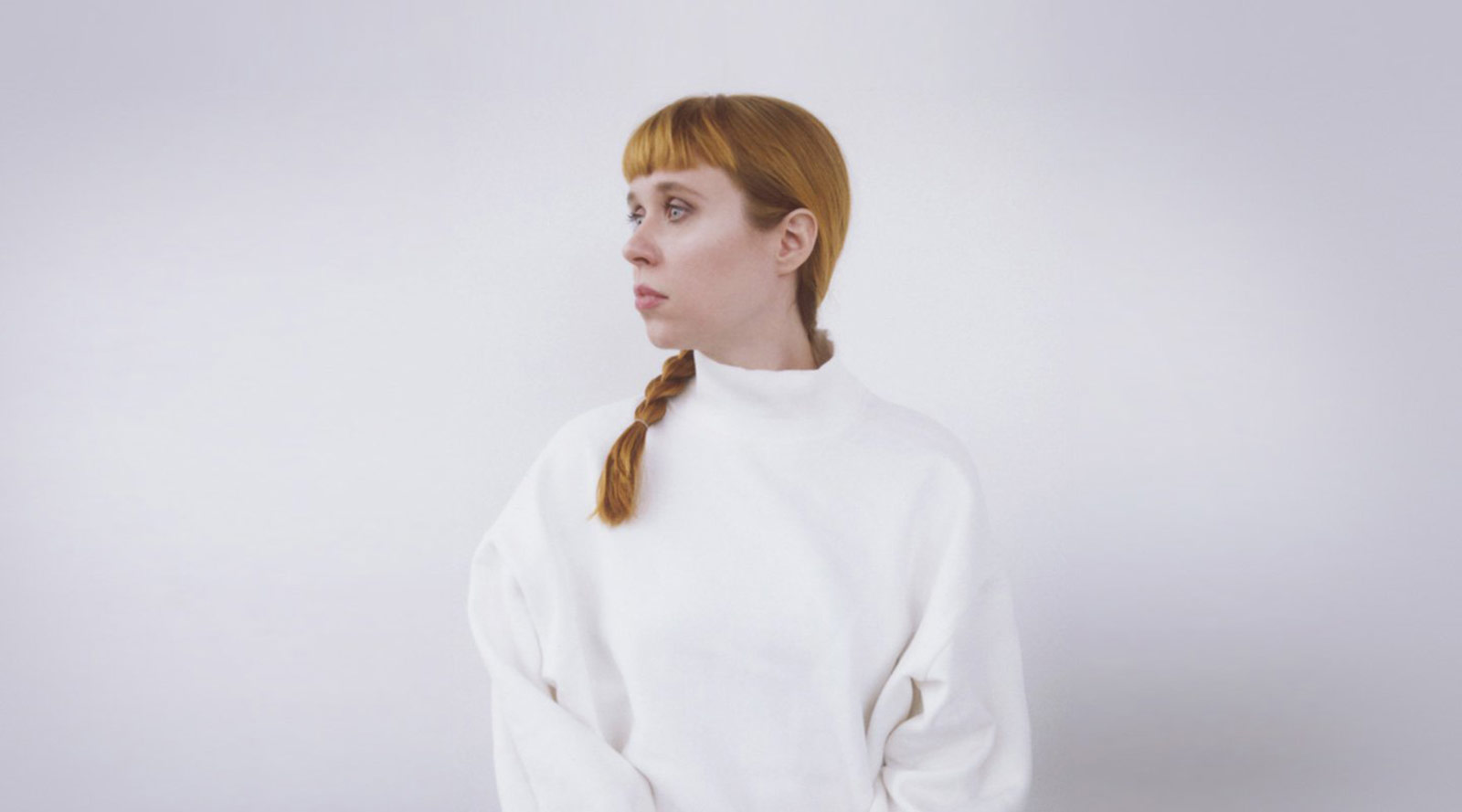 American sound researcher and experimental composer Holly Herndon is the new 4AD’s diamond. After acquiring praise and international recognition with her first album, Movement (2012/ RVNG Intl.), Platform is her second full-length and debut at the same time in the British indie label, in co-operation with her former New York-based imprint. Holly brings her talent and academic background –she is currently at the Ph.D. program in Composition and Computer Music at Stanford University– to the club scene. As a matter of fact, she lived in Berlin for a while, which most definitely granted her experience and knowledge in the field.

She currently resides in the San Francisco Bay area next to Silicon Valley, mecca of computing development. Some of these manufacturing companies developing sound research and music composition software are very happy to have Holly around to experiment and push their new programs to better suit creation of music. She has played in a range of well-known international shows such as ATP, Fringe, and Sónar. We had the great opportunity to meet her at Supermassive Festival in Helsinki, a rather interesting up-and-coming festival set in a few classic venues spread in the center of the Finish capital. In this light, Herndon presented her new show working together on stage with dancer-performer Jonas Lund and visual artist Mats Dryhurst. Mats interacts with the audience by projecting edgy messages in real-time, whilst creating 3D landscapes from objects and materials taken from the internet such as the Facebook avatars of the people attending the event. After the gig, we rode the van towards the hotel, Holly smoking her e-cigarette while wearing a t-shirt from his new tour which reads “Free Chelsea Manning.”

Where do you live now?

We live in San Francisco, in the Bay area.

Do you know Jason Munn?

I never heard of him.

He is a very talented illustrator living there too. He started out designing posters for Death Cab For Cutie.

But please tell me about the Max/MSP program that allows you to create your own instruments.

I’m not sure what year it was developed, but it used to be two distinct programs, Max and MSP, and they kind of joint together. Basically, it is a visual programming language for music. I first heard of Supercollider, which is similar but text-based. I have heard about it in Berlin but I didn’t really know how to use it, so I took some classes.

Very briefly, how does it work?

How do you connect the visual object with a type of sound?

Oh gosh, how do I explain this. Imagine a music sequencing program and you can go one layer deeper and control all that program so you can build anything. You start from the blink slate and say you want an ‘on’ or ‘off’ button, you add that button. Say you want an isolator, you add that. You have to build everything from scratch. There is no ‘play’ or ‘stop’ button, you have to build everything from ground zero. Because you have that flexibility you are able to create your own world, you are not necessarily tied to presets. Other music programs have been engineered by engineering teams where they’ve made decisions, or they make you create music in a certain way, which can be really helpful and fast – but if you want not to be pushed in a certain direction you can start from zero with this one. So it’s very liberating, but it’s also very time-consuming.

Exactly, it’s very approachable and there is a very large community of users online to help each other with forums full of people asking questions. There is a huge data bank. As far as programming languages go, I think it is the most approachable. There is also a free version of this program called PD Pure Data, and this one is open source free and they cooperate with each other.

Have you used this program to create the entire Platform?

Not the whole thing, just parts of it. There is a really cool collaboration between Cycling 74, who is the company building these programs, and Ableton Live. The two companies came together so people can use both programs at the same time. They created Max For Live, so that is what I mostly use, because you can use it as a plugging. You have the stability and the easy use of Ableton but also the customisation of Max/MSP.

How does the music composition work for you?

I’m actually doing a doctoral in Stanford University in composition and I’m focusing in computer music. I focus primarily in new forms of composition and new ways of using the computer to create music. This is a 5-year program and I completed 3 years now. It is a really great institution, there is a place called Karma, written CCRMA, The Center for Computer Research in Music and Acoustics.

Where is this exactly?

This is in Palo Alto, this is all Stanford, CCRMA is housed within the music department there. It has a long history of computer music research, going back to the 1960s. They have done a lot of work with Bell Labs. John Chowning discovered FM synthesis there, which was a huge, huge, deal for most of Yamahas, and digital synthesisers like the DX-7.

Recently, when it was the premier of the N.W.A biopic, he wrote on internet "Straight Outta Palo Alto".

Oh my God, that is embarrassing (laughs).

Palo Alto is a place well-known for very rich people living there. Whether they had much or less money, any house there nowadays is so expensive that makes everyone there super rich.

Do they have Buchlas at CCRMA?

Not really, I mean they did have that in the 1970s, but it is very focused on the most contemporary and the most cutting-edge research. It is not really analog fetishism there. It is pretty much entirely a digital research center, because they are researching on the most hyper contemporary technology that’s coming out. They’re trying to figure out new ways of signal processing and physical modelling.

Have you written this new album there?

I did some of it there. I actually find it really hard to work when am there because I’m usually teaching…

Oh, you are teaching at Stanford too?

Yeah, so I found really hard to shift gears. So the album was written more over my pauses from school. We went to the warehouse in L.A one winter and sketched there, and we went to London and Berlin, so I have written this album all over the place. Totally out of control (laughs).

Didn’t you work alone on this?

It was a collaborative record. I have worked with Mats and Jonas, who do the live act with me and also some other wonderful people. Open up process.

The research is all fundamentally towards the composition, so I’m not the kind of person just interested in research for research’s sake. A lot of the people in Stanford are doing that, and I love them. But I have an idea and try to create something and that will go towards the piece. It is always an idea about composition.

Well, each track was really different, each collaborator has their own way of collaborating, which made the songs very different. Some people, I met them in person and we worked on textures together, and some people were over the internet. It is just part of the wedelling down and editing down process, come up with some sort of patch, or write some software.

Do you have a vision of the whole piece towards which you move?

It is more experimental than that, but there will be some conceptual framework that will make me want to create something and then I will hear how that sounds and that’s what the studio time is – you play with it, you experiment with it, and you find how you can make that work into something you can share with people and communicate with people.

Have you finished the record entirely yourself or did you want someone else to do the final mix?

I pretty much always mix with Mark Pistel. He is a producer based in San Francisco. He mixed a lot of my first album along with Scott Arford.

Do you know EMS (Elektronmusikstudion), the center for Swedish electroacoustic music and sound-art in Stockholm?

Oh, for sure. Actually I know EMS director Mats Lindström, he’s been at Stanford University.
You know, there are not many institutions dedicated to sound research, so people know each other. He wanted me to come over for an artist residency and work a project there.

I actually was really lucky to have that opportunity, working on a personal project there.

Do you make music as well?

That’s right. You definitely shouldn’t miss that opportunity! EMS is an amazing place. Maybe you can do that in February, when you will play at Sónar in Stockholm?

Oh, not in February, we would like to go to EMS when is warmer, a bit later on.

Will you play Sónar Barcelona after the Scandinavian dates?

No, we did Barcelona last summer. It’s only the Scandinavian dates left.

I thought the purpose for Sónar abroad is like a teaser to promote the one in Barcelona.

I think we haven’t got confirmed playing there in June 2016. For us it’s the other way around, the Scandinavian dates are the final ones.