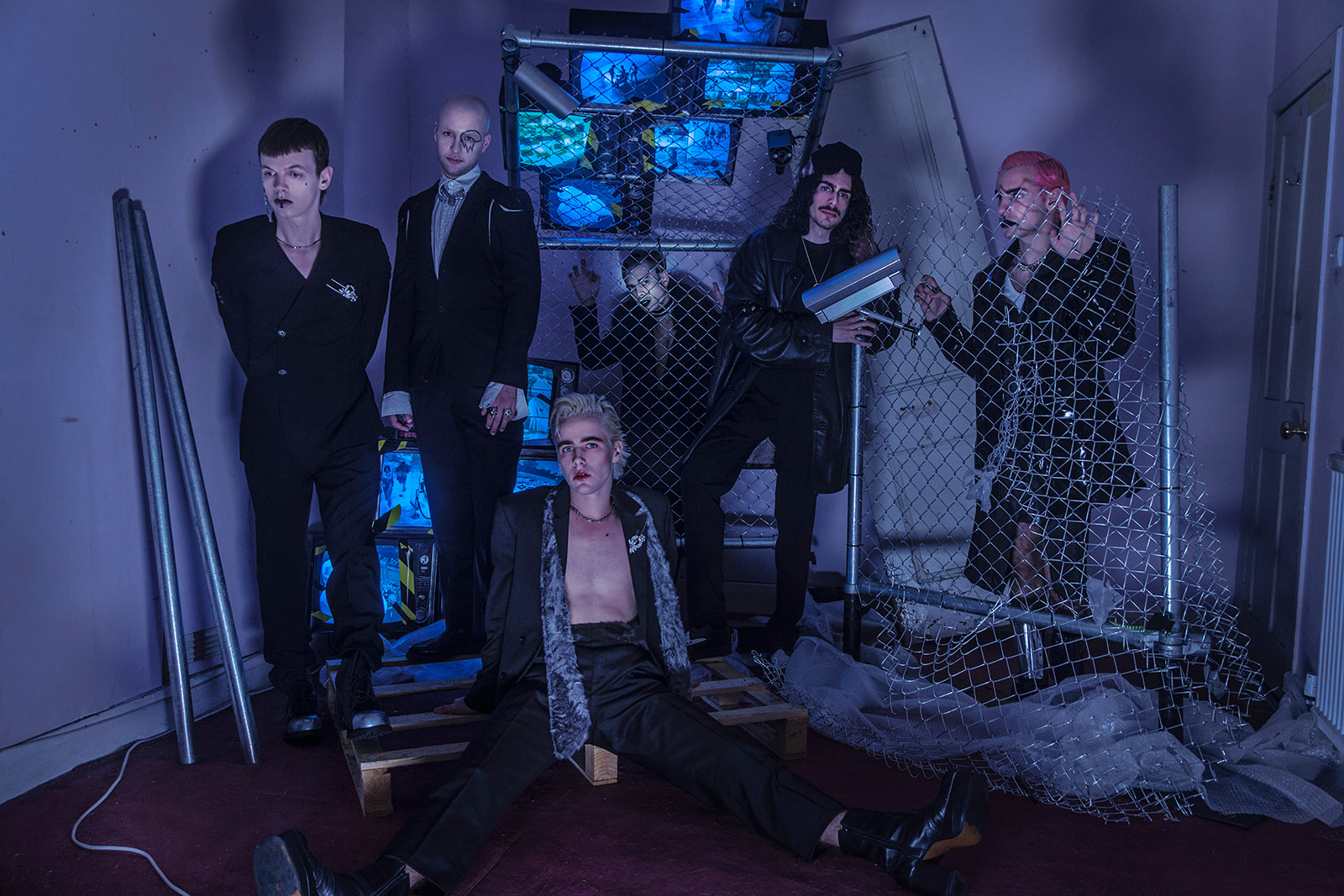 Does repeatedly singing the word ‘music’ to a melody make real music? Obviously. The first time you hear HMLTD, they may be hard to swallow, but the more you listen, the more you want. And I’m addicted. If you don’t believe me, just watch one of their live shows. These fabulous freaks have earned a reputation for their performances – with the aim of making completely vivid five-sensory experiences. Why wouldn’t you watch a gig to the smell of burning hair anyway? After bugging them for weeks, they finally surfaced from the ‘underbelly’ of London for an interview with us about being outsiders trying to become the most famous pop stars in the world.
So you’re yet to have a Wikipedia page or artist’s bio on Spotify. If you did, how would you describe HMLTD? Or was it a deliberate choice to abstain?
Entirely deliberate.
After ten minutes of researching the HMLTD band members online, I found philosophy essays, a couch surfing profile, a dating profile (featuring a very floppy-fringed photo of Duc), university profiles, music featuring you in other bands… and I’m sure if I was a bit weirder I could find all sorts of skeletons in your closets. You’ve always been a band of mystery, is it time to have an Internet sweep? And how are you handling fame?
Everything that’s on the Internet and in any way related to our names, individually or collectively, is deliberately left or put there so that curious people end up asking more questions instead of receiving any answers.
The name HMLTD – apparently once ‘Happy Meal LTD’, yet another source said it stands for ‘humiliated’ minus the vowels. Who knows with you mysterious bunch. When asked about the name previously, you’ve talked about how HMLTD is not a word, so it has no loaded meanings and you can control it. (Unlike ‘Happy Meal LTD’, which immediately conjures up flashbacks to freaky McDonald’s parties as a kid.) Your new EP is called Hate Music Last Time Delete. Is this a move to get those name-focussed vultures off your back, and will you keep playing around with different acronyms?
HMLTD means:
Happy Meal Ltd.
Happy Meal Unlimited
Hate Music Last Time Delete
Humiliated
Her Majesty’s Latent Torpedo Destructors
How My Life Turned to Death
HMLTD
Her Mother Loved To Dance
None of the above
All of the above
There’s been a little controversy around signing to big labels. But you said that in order to change the mainstream, you have to do it from within, to get the biggest platform possible. You even said, “We want to be pop stars”. I guess being the avant-garde/post-punk/glam rock/pop goth/indefinable art form that you are, it’s easy to stick to the niche arty corners of London. But you’ve set your sights wider than that. I mean, the first step was working with Justin Tranter, who’s produced music for Justin Bieber, Britney Spears and Selena Gomez. What’s next?
The first number one single to top the Billboard charts about a sex dream with Leo Trotsky.

You’re a sextet, all incredibly creative and bursting with ideas. But sometimes, too many cooks spoil the broth. I know that you each write and compose different tracks; hence why people find it difficult to put you into a neat little genre box. It obviously works a treat for you, would you say the work balance was equal between you all?
Not always. Otherwise, we would’ve killed each other. We still might.
As well as genre fluid, people have referred to you as gender fluid. You’ve received some controversy over your aesthetic, being called ‘queerness tourists’, as people suggest you’re ‘borrowing’ the LGBTQ identity for the band. But on the flipside, on a tour of yours, your car was vandalised with the word ‘gay’, and a member of the band was chased down the road for being too glamorous. It’s a tricky one. But moving forward, the way we’re heading is breaking down these strict genres and binary boundaries. And by becoming the famous pop stars you want to be, you’d be getting this fluid idea into the mainstream. And surely that’s only a good thing, right?
The idea behind both how we sound and how we look is breaking down boundaries. But in terms of men wearing makeup and dressing androgynously, a thousand people before us have done what we’re doing, and we don't want to take any credit for that. The majority of the band identifies, unproblematically, as straight men. But we’ve all grown up in an environment where that phrase means something toxic and violent, something that we don’t agree with or identify with.
While we mostly see ourselves as ‘male,’ we don't see masculinity as a monolithic thing. We believe there are other versions of masculinity and that people don’t have to conform to the toxic one that seems to dominate society and define the patriarchy. ‘Queerness’ is obviously a concept in flux, and whether this idea falls under that umbrella is up for debate. But the point is that we all identify with this alternative masculinity, and that’s sincerely what we present. We dress to express our individual identities and ourselves.
That’s a great statement!
A lot of that is influenced by artists and innovators who do identify as queer, especially two we’ve been really lucky to work with: Charles Jeffrey and Jenkin Van Zyl, who totally inspire us and to whom we are indebted. Most of the artists we love are queer, and we think that’s partly because when you look at the creative world, in terms of male representation, it’s amazing what proportion of those creatives are queer.
That owes a lot to how creativity and imagination are really celebrated and respected in the queer community, and partly to the fact that the toxic version of masculinity we mentioned seems to totally punish these qualities from day one, which is yet another problem with that version. So, no, we definitely don't think that we’re ‘queerness tourists’. What we present is always totally our unadulterated identities. Encouraging others to do so is the key message of the band, and we believe very strongly that it’s a good message.
Let’s talk about the Soft Cell remix, released back in July. They haven’t made music in over ten years and made a comeback with a remix of your Proxy Love. But they’ve also done covers of Nine Inch Nails, who you happen to be supporting in some of their upcoming United States shows. Is that how you were introduced? And how was it collaborating with such an iconic duo?
We met Soft Cell independently of Nine Inch Nails. They liked our music, and long story short, we ended up scuba diving and bungee jumping together… and other crazy things that we can’t really reveal in this interview.
It would be silly for me not to mention it, but lead singer Henry and I are from the same small-minded nook of Devon, and both headed to the bright lights big city of London to thrive in its creative hub. You’ve described your band as ‘pans-European’, hailing from different countries, all attracted to London like moths to a flame. The music and creative scene in London is having some sort of revival, alongside bands like Sorry, Shame and Goat Girl promoted by East London’s platform So Young. What do you think was the trigger for this musical renaissance, could it be down to Britain’s political environment?
Plausibly. Or maybe people finally started paying attention.

On the topic of collaboration, you’ve worked with (aforementioned) cutting-edge fashion designer Charles Jeffrey and avant-garde artist Jenkin van Zyl, but also the bizarre set designers at Brockenhurst and Sons, and most recently, Duncan Loudon for the glitchy, freaky footage. You’re not afraid to get others involved, and even said you wanted to start a sort of movement. How did you all find each other – through the Internet, or do you socialise in the right circles to pass on names by word of mouth?
A mix of the above. There’s an underbelly in London with all kinds of talented and gifted people. And once you’re in, you end up swimming in a mud pool of genius innovation.
Your music videos are incredibly experimental and anarchic, portraying twisted tales of lust, pride, greed, envy, gluttony, wrath and sloth. But we’ve got to talk about one music video in particular, for Pictures of You, directed by Duncan Loudon. Duncan focussed the video on the controversial Internet sensation of ‘deepfakes’: a form of AI that allows you to put someone’s face on a video. Of course, it arose from the depths of Reddit. You then posted the explicit version of your video on PornHub (which was later removed). I found this incredibly interesting, as ‘deepfakes’ began as a form of comedy but has since become a malicious stage for revenge porn, now used solely for degradation and humiliation. By using this idea in the video, what are you trying to say?
Without wanting to reveal too much about the art, it is clear that a lot of lusting (and loving) involves projecting onto the other. Combine that with celebrity and porn culture, and you have a toxic recipe for a distorted sexuality. We thought it was important to capture that in a video.
Performing for a music video, I imagine, is a lot easier. You have only a small audience, and any mistakes can easily be chopped out in a matter of seconds. But performing on stage is a different ballpark. How do you prepare for your shows backstage, and what has been the weirdest and most unexpected performance to date?
There are a lot of rituals involved: summoning spirits, casting spells, etc. At our Southampton show, a man climbed on stage and kept offering Henry a glass of water; getting progressively angrier when his offering was denied. The man begged Henry to write a song about it. And he did.
Let’s talk about your fashion aesthetic. I just have to know – how on earth do you get through one of your performances in leather trousers?
His crotch hurts but it’s worth it.

Finally, I’m incredibly intrigued by your Instagram, specifically the captions. They’re philosophical, poetic, profound… and pretty incoherent. Who’s behind these?
Achilleas writes a lot of them. He almost became a professional academic philosopher. Therefore, he is naturally incoherent and profound. Some of them are also crude copy-pastes from the Bible, the Vedas and other sacred and non-sacred texts. 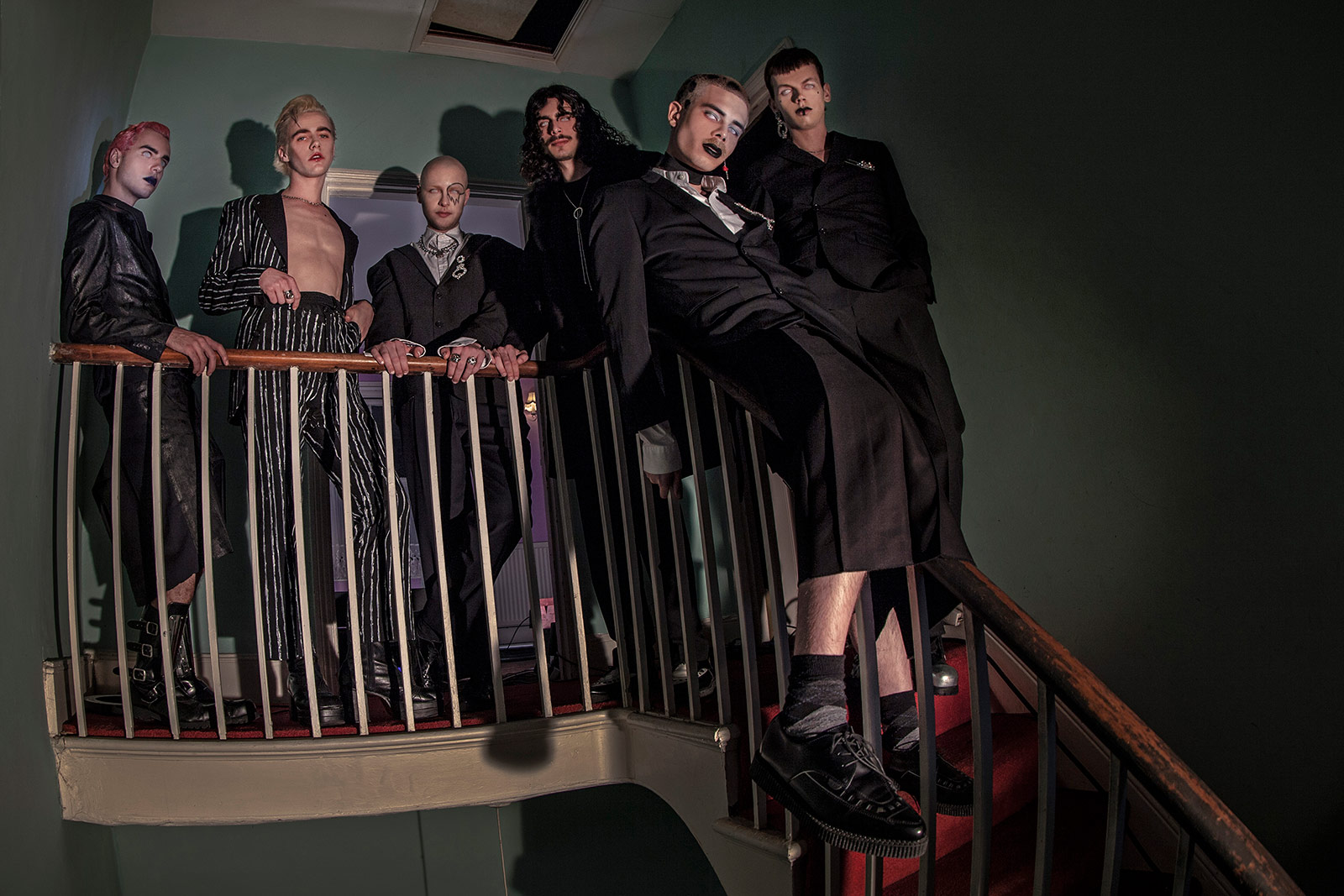