Finding life in the inanimate 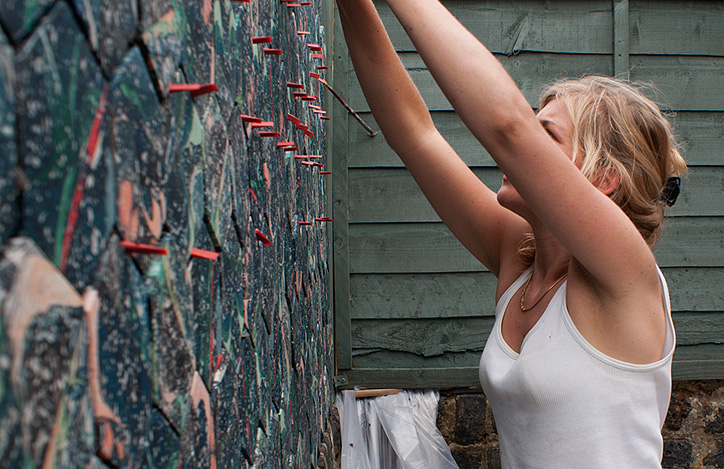 In her country home built by her father, Hilda Hellström would spend time as a child in her father’s wood workshop whittling butter knives. She has now carved her way into the art world, exchanging wood for rock and metal, creating unearthly pieces from fundamentally earthly materials. Blending modernity with the archaic, appearance with reality and futility with functionality, Hellström looks past the superficial exterior of an object in search of its hidden narratives. She speaks to us from her Stockholm studio to deepen our insight into her work.

Tell us a bit about yourself.

I’ve wanted to be an artist since I was tiny. I went to art school but I quit because I felt I needed guidance that they don’t really offer. It’s very subjective and that creates a lot of anxiety. So I transferred to do a BA in product design and continued with an MA at the Royal College of Art in London. I think it’s important that an education gives you tools to do your own research.

There’s an otherworldly quality about the sedimentary patterns that appear in a lot of your work, somewhat giving the impression that the materials have been excavated from an interstellar body. Is this something you had been trying to achieve when you first started or did it just occur naturally in the process?

It’s something quite conscious. I think I’m only interested in making work where people stop and wonder how it’s made or what it is. That they hopefully feel a slight bit of awe around it. Like now I’m working with anthracite, which is such a shiny material that it kind of looks like it’s artificial, plastic. It’s a natural material but we don’t have many references of it as it’s not used in our everyday life. But plastic is. So my ‘artificially constructed stone work’ (i.e. the Sedimentation series) looks more ‘natural’ than the anthracite work. It creates a confusion that I like playing with.

A material like anthracite: that’s something I’ve never even heard of before, not that I’m an expert. Where do you find these strange and unknown materials?

I came across it in Scotland where I went for an artist residency in the summer of 2013. I found a shiny black rock on the ground while I was walking. I like materials that I don’t really understand initially. After doing some research, I found out that it’s part of the coal family, so it’s a real geological material at just one stage in the process of its natural narrative.

I can just imagine the scenario: upon a midday stroll in the Scotland moors you stumble across this one material that will go on to be the basis of an entire collection of work, all on a chance encounter…

Could you briefly describe your creative process from the initial concept to the final, tangible piece?

I’m very curious about what constitutes our reality and how we perceive it. How everything around us has different connotations and meanings to everybody. Then I see something, either in nature or in the manufactured world and I’m curious about it: partly how it’s made, partly what connotations the process of making or the material have to people. Then I borrow books from the library and become an amateur expert on the subject and in different ways try to understand it. The outcome can be an imitation, an interpretation or something only inspired by a definition from what I’m reading. Like with the poetic name, ‘pressure shadows’ can give inspiration. It’s a name to explain a metamorphous process that creates certain patterns in rock formations.

With Sedimentation, given that you could not entirely control the way in which the materials came together, was there ever a time when you found yourself disappointed with the outcome?

Yes, of course, then I discard it!

I can’t believe you discard it! It seems like such a long process that it’d be a shame to just throw something away.

I guess so, but sometimes, you have to let go.

Do you have a favourite piece from your past collections?

Yes, I have two pieces I don’t sell. The first one I made while still at college [at this, Hellström shows me her Rock Urn from 2011] and one from my last solo show at Gothenburg Museum of Art.
I also really like my piece for Swarovski. It’s something I could not have done without the commercial backing because of the crystal and scale of it. I get to see it every now and then so that makes me happy.

So there are some that you can’t let go of! What’s special to you about these pieces?

There are just some that you feel you want to hold on to. It [the Rock Urn] was my first one, so it has sentimental value.

Your piece, The Foundry, stands out from the rest, not in the least from the larger scale of it. How did you come up with the concept?

The Foundry is still about showing material in a way that creates a bit of wonder to people. It’s very rare that people see liquid metal. Then there’s a solid, lighter metal floating on top of that metal. The happening or installation became a meditation with material, almost a bit of a transcendental experience, if you like. I think my other work attempts the same thing.
For the project I worked together with an Austrian company that makes tile stoves so I used their huge kilns to create a new type of oven/stove, still using some of their pre-existing moulds.

In The Materiality of a Natural Disaster, it was especially thought provoking how in your article you stated that you made “rice bowls that you can't eat off, from soil you can't grow rice in.” Do you approach your work with a message you want to evoke or does the symbolic value evolve in the process?

That whole project was very intentional, to evoke symbolic value. As mentioned I’m very interested in what constitutes our reality and what objects mean to us. There was an exhibition at the V&A called ‘Postmodern’ amongst other things showing costumes from 80s movies such as “Blade Runner”. You got goose bumps when you saw them. It’s interesting how things can be loaded with powerful meaning: similar to a piece of the Berlin Wall. You can get an intense physical feeling close to some objects, if that makes sense? It can evoke similar feelings like being close to a person you very highly respect. It’s almost like some objects with a strong narrative are more animated or more alive than other objects. That’s where my research started for this project; and I wanted to create physical souvenirs that talked about the devastating disaster that had happened in Fukushima.

You’ve lived, visited and exhibited in many different cities throughout your career. Do you look to where you live and your surroundings for inspiration? Is there any place in the world that you find particularly stimulating?

Yes, I think probably I do. But on an intuitive level. You also get affected by how the creative community of a place think. Half a year ago I moved to Stockholm from London and I can see it happening. But I’m mostly deep inside my head, to be honest.
I love Japan, if that was a surprise.

Is there a certain art movement that you look to for inspiration? How do you feel sculpture as an art form has developed through time and into the art world of today?

In chronological order I’d say the Romantic era (more specifically the Symbolists), the Dadaists and the American abstract expressionists. What they all have in common is the focus on the subconscious, the emotional response and intuition. In my eyes there’s something transcendental and mysterious about all of them. My mum’s a psychoanalyst so I’d get my interest in emotional response from her. My dad was a cabinetmaker, so I get the making part from him.
Like all art forms it’s more conceptual now, commenting on the intangible communication society we live in. Often machine made with less focus on craftsmanship. My work is quite archaic in that sense.

I’m doing work in anthracite as I mentioned before, for a group exhibition at Gustavsbergs Konsthall from March to August. Then another show at Eskilstuna Konstmuseum in September and quite a few private commissions. I also just bought a flat in Stockholm that I need to renovate a bit. 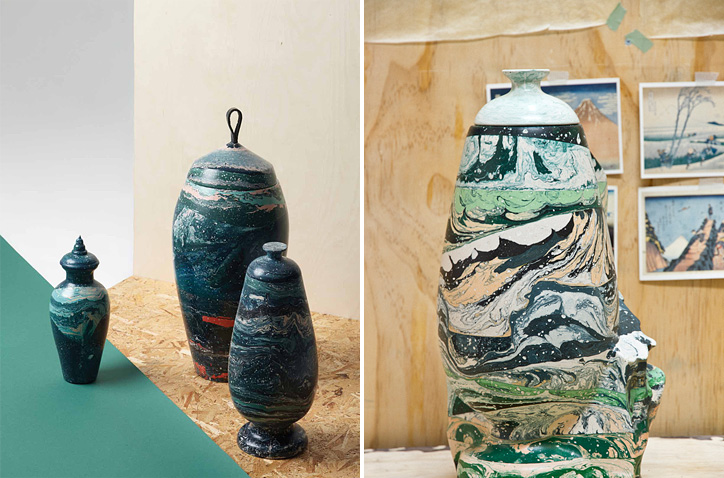 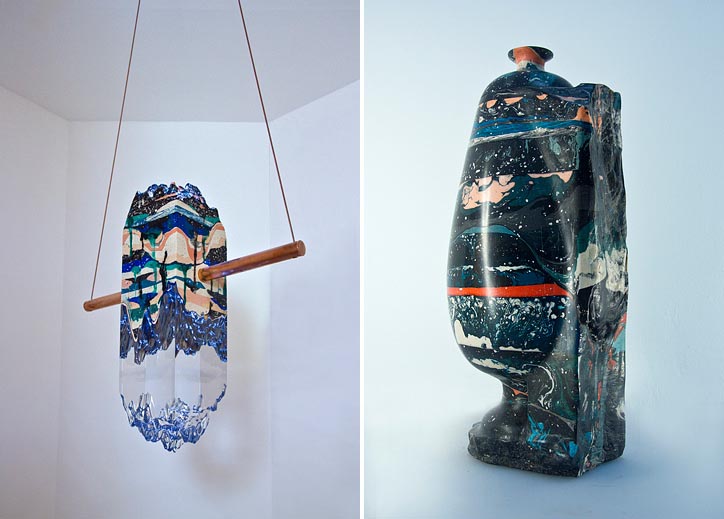 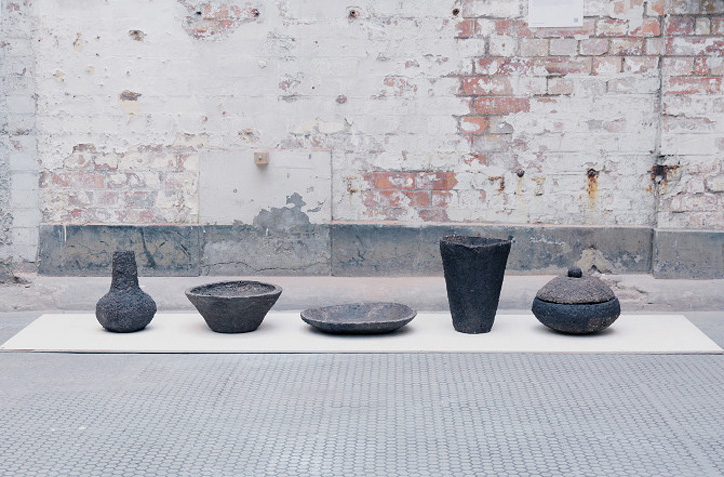 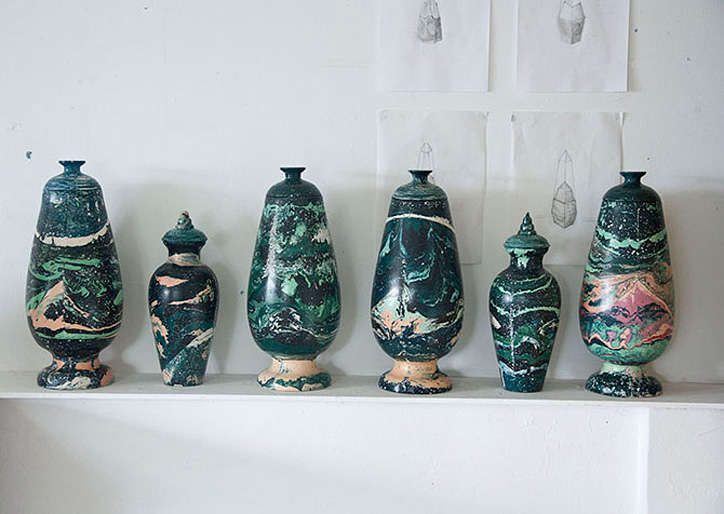 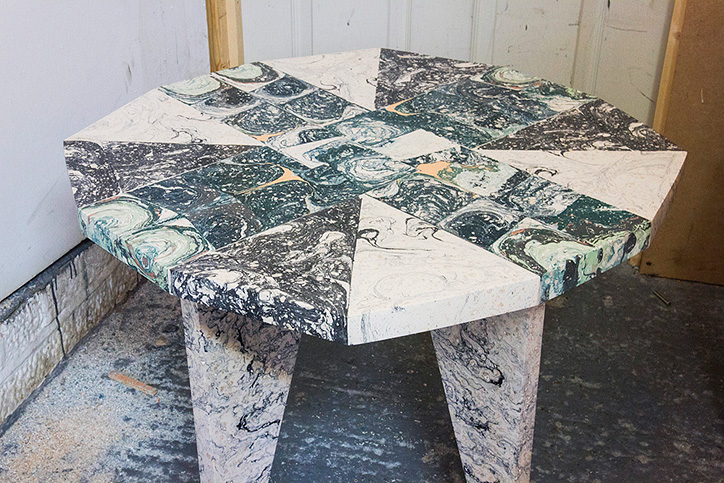 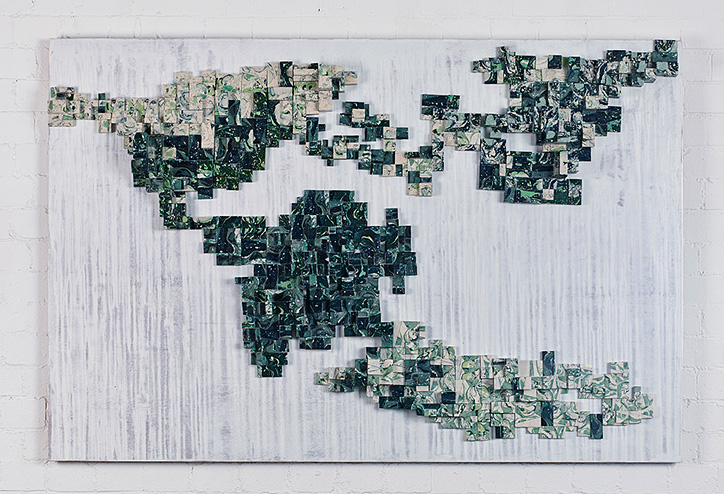 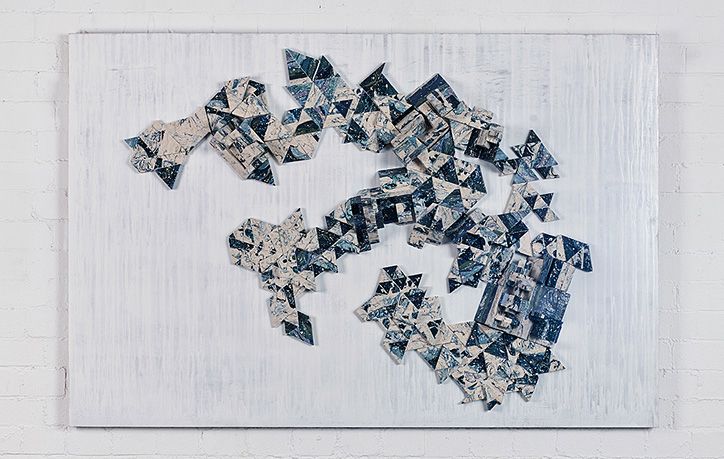