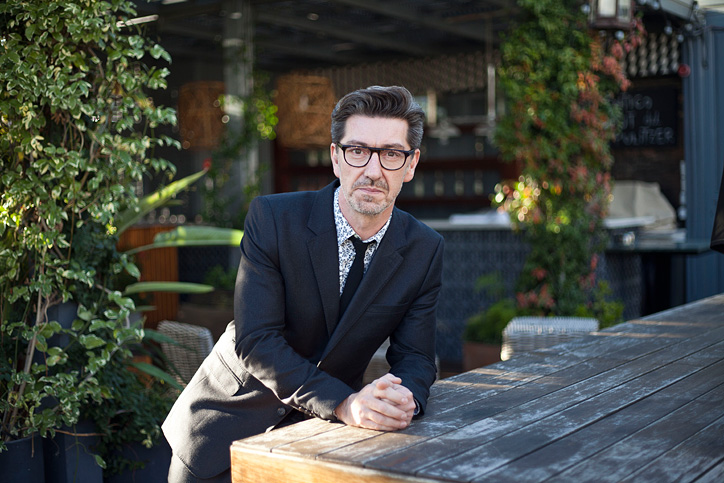 “Who revolutionised dance music the most? And people would say, Daft Punk.” This is what Kanye West states in the documentary film "Daft Punk Unchained", the first film about the French duo, directed by Hervé Martin–Delpierre and co-written by journalist Marina Rozenman. The documentary inaugurated yesterday the 13th edition of the Beefeater In-Edit festival – a film that explores the 20 years old career of the electronic band, from their early beginnings with Darlin’ to the current Daft Punk worldwide phenomena. It features exclusive interviews with friends and collaborators like Pharrell Williams, Nile Rodgers, Giorgio Moroder or Michel Gondry. We’ve talked with Hervé Martin Delpierre, to get to see what’s underneath Daft Punk Unchained and know a little bit more about the most secretive duo in the world.

Daft Punk have always stayed away from the press and media, how did you manage to convince them for this project?

At first it was an agreement between the management of Daft Punk and BBC Worldwide to make the first documentary ever about them – because Daft Punk is not a new band, they have a 20 years old career, and there wasn’t any documentary about it. So it was a long way, it took a year for Daft Punk’s management and BBC to find a way. But you must understand that it’s not a film about Daft Punk by Daft Punk, with the final cut by Daft Punk, and authorised by Daft Punk, it’s an independent film.
BBC contacted me and asked if I wanted to do the documentary: they had an agreement with the band, we could use their music and some footage, so I said yes. It’s a very interesting story to film, about two creatures who battled to do what they wanted with freedom, to obtain everything and to convince everybody that it’s possible to live a normal life and to live, at the same time, as a star.

Despite living in the globalisation era, Thomas and Guy-Man have always kept their anonymity and a total control of their image. How did you feel making a documentary about people who don’t give any interviews and don’t show their face?

That was my first question when I was going to Los Angeles to meet with the Daft Punk management, in Daft Arts. We went there to talk about what we could do and what we couldn’t do on the film, and it was not a surprise for me not to be doing an interview in the documentary. And I guess it’s normal, why changing a 20 years old career leitmotiv for a documentary? As we were talking, I understood one important thing: if I interviewed Daft Punk, I couldn’t make the film. I’m not a journalist, I’m a filmmaker, and if I had interviewed them, I would have lost a very important thing: the history. Because an interview would be too huge, and the impact of it would have blurred everything else. So it was an important decision at the beginning, and now I understand that it was good for me.

In the documentary, you narrate their career with footage from the archives that goes from 1996 to 2013, and with the testimony of some of their colleagues and closest collaborators. Was this your original idea or did you decide to do so when you realised Daft Punk themselves wouldn’t be on it?

It was a bit of both. There are many friends, and many collaborators, but nobody had talked about Daft Punk before. So I took care of that, and we ended up with a huge casting. Normally, when you explain your script and you want lots of people or characters on it, it’s normal to think you’re going to loose the common thread and that it’s going to be impossible to follow the history. But when I was organising the cast with some of their closest friends and collaborators, I was sure they had asked Daft Punk if they could be talking or not. And you know the answer, because the film is here, and people like Kanye West, Éric Chédevill or Pedro Winter are on it.

Daft Punk have always had a total control of their creative chain, and they’ve always set their own rules regarding the music they were making. Up to what point did they give you freedom for making the documentary?

It’s an interesting question, because you say, “okay, this band is totally control freak,” and in the first meeting I asked, “can I be free, in this case?” And Daft Punk’s manager Paul Hahn said to me, “I have an answer for you: Thomas and Guy-Man know your work, know your last film, they respect you as an artist, so you’re free, you can make everything you want from your point of view.” And for one year I was free, and they didn’t try to see the film in advance. Daft Punk is a very special band for that reason, they’ve always had freedom to create their music, so they decided to let me and my team have this freedom as well, is the same kind of power.

How was their reaction the first time they watched the finished documentary?

For those who haven’t seen the documentary yet, what will an actual Daft Punk fan discover in it?

It’s strange, because in France there are lots of journalists who say they know everything about Daft Punk (laughs). Maybe it’s true, and maybe some people can say this is not new. And I say it’s weird because there’s a lot of people in the film who haven’t talked before, like Éric Chédeville, Pedro Winter, Pharrell Williams, or Nile Rogers. So this is the first time to see the human experience of Daft Punk. I think that a fan would understand them better this way, they don’t need to know about the wife of Thomas, Guy-Man’s new girlfriend, what’s the age of their children, their hair colour, or stuff like that. You have many magazines to find out about that, but if you really want to understand who these two artists are, this film is a good way to do so.

Despite being one of the most successful bands in the world, it hasn’t been always like this, for example with Darlin’…

Everybody knows about Darlin’ in France, it’s a very special band; it was Thomas, Guy-Man and Laurent Brancowitz, who’s a member of Phoenix now. It’s interesting that Daft Punk was born out of the ‘unsuccess’ of Darlin’. We are in a world where losing is not possible, and a second chance is rare. Talent is not inside of you from the beginning, you must work so people can see it.

In the interview Daft Punk gave in 2006 to promote their album Electroma, when asked about the reason why they were not showing their faces, they answered that was because they wanted to separate their physical image from their creation. How important is that?

If you want to see Thomas and Guy-Man’s faces, it’s easy: search on the internet and you’ll find a picture of them, but are you really interested? There are maybe one or two paparazzi photos of them, not more, why? Because it’s not interesting, nobody wants to know. If people wanted to, there would be ten paparazzis every day in Paris trying to photograph Thomas and Guy-Man when they’re taking their kids to school, but there’s no paparazzi, there’s no price, and nobody wants to know about that.

Do you think that the mysterious universe that surrounds Daft Punk is alive because they keep their faces underneath robot masks? Do you think it’d be the same if some day they decided to take them off forever?

No. I think that their decision was very important for their band, because robots are fiction, and with fiction and honesty you can create a conversation. And I think that Daft Punk is a phenomenon because there’s a very nice conversation between the public and the robots. They have built, with time, a long high quality conversation with their public, and without the robots that wouldn’t have been possible. When you have a dream, when you read a book, when you see a very nice movie, do you want to destroy everything about it? Or do you want to stay with that fantastic feeling inside you? So you know my choice, and the choice of the public of Daft Punk: robots must stay robots. Sometimes, it’s nice to stay with the intrigue.

How are they face to face, as human beings?

Normal people, like you and me. You can go to Paris and see Guy-Man in the metro, he takes it everyday, that’s the power of Daft Punk. Just two days after they won the Grammy, a friend of mine in Paris texted me, “Hey, I’m in the metro, just in front of Guy-Man.” They’re the best electronic band in the world, and two days after they win the Grammy, they are in Paris and nobody knows them – that’s their power.

Daft Punk have always gone to the next level in terms of fiction and reality, and being innovative in music, self image, music videos or live shows. What do you think comes next for them?

I don’t know, maybe their next step is a movie? Because they are not just only a music band, it’s not just a concept. And I think that their next step would not only be just music. I’m sure that these guys will discover a hole new way.