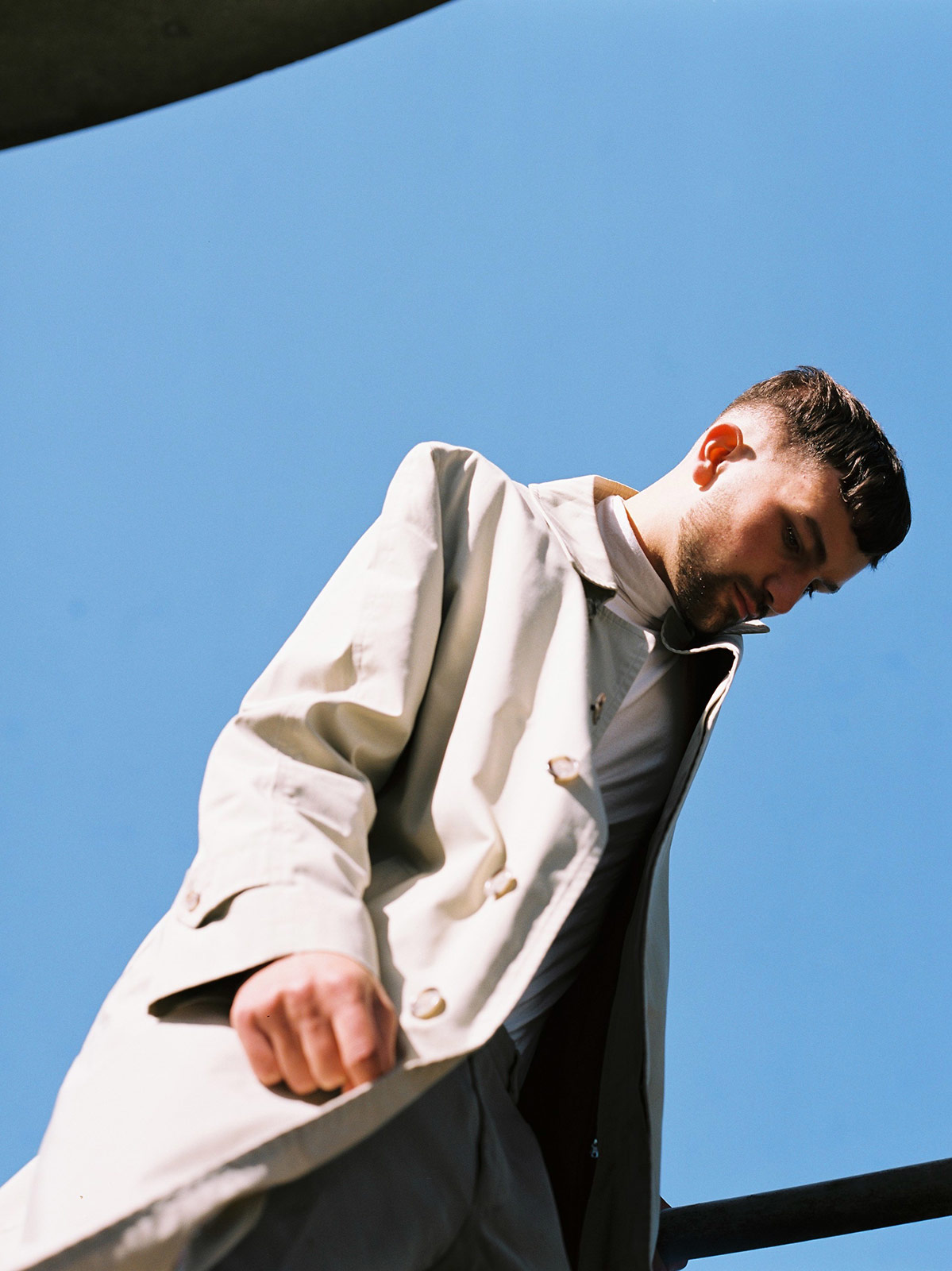 From name-about-town to touring Europe and securing a spot at coveted Simple Things festival last weekend. Harvey Causon is on the cusp of something! His thoughtful lyricism meets breaking waves of piano and drums that open a dream-like sonic space we could all do with disappearing into sometimes. Unassuming, elegant and sure to get a room’s attention- we have our eye on this artist. Drawing an impressive crowd, he charmed us. Disenchanted over Brexit, yet hopeful for the future; Harvey chats musical beginnings, the value of boy’s ballet and praises his band members.
Identified as experimental electronic R&B, your music stretches and turns into a unique place, what inspires your sound?
I was lucky to be exposed to quite a varied palette of music from a young age. My dad got me into ‘50s jazz, Talking Heads and ‘80s bands like Prefab Sprout. My mum took me to see Stevie Wonder as my first gig and she showed me Absolute Beginners, a film she danced in with Bowie. Growing up, I went through phases of ‘90s R&B, Bombay Bicycle Club and Tame Impala, then in more recent years, found a real affinity for electronic music pioneers Delia Derbyshire, musique concrète through to Aphex Twin. My band got me into a lot of hip-hop, Afrobeat through to the likes of Radiohead and Björk. I like to use found sound, which is inspired a lot by artists like Mount Kimbie and Twigs. Clever pop, R&B and music that makes people twerk without wanting to is my secret calling
Does being a Bristol-artist influence you in any way?
I think there is of course an inherent Bristol sound, especially on the underground side. Listening to Noods Radio and artists like Franco Franco/Kinlaw, Giant Swan and Scalping have all influenced my sonic pallette through watching and playing with them. I am of course a fan of Massive Attack and Portishead and feel an affinity to why their music seems to sound why it does being from Bristol. Someone once said the West of the United Kingdom has a more thoughtful, soulful and adventurous end of the bass spectrum. I thought that was put nicely.
Recent release Artifice’ broods “love is artifice”, is this one of your more personal tracks?
I wrote that one amid a difficult breakup. Someone I still care about a lot and it just summed up how having previously been so close and inseparable from someone to then not having any contact is a tough thing to deal with. I think it’s a form of grief. Letting the psychological games ensue can be toxic and make it difficult to move on, especially now that we are all so digitally ‘connected’.

Your lyricism is well thought through and captivating. When writing a track do you start with the words?
Thank you! I kind of do both things separately but at the same time – music and lyrics. I write down words all the time and write a lot of stream of consciousness. I research into ideas or concepts and then bring together what best conveys what I’m trying to say in a track whilst trying not to forfeit pentameter and flow. I think that linguistics and language are beautiful and captivating things. Control over layers of meaning and semiotics through to conception of visual material is such a powerful position to have as an artist and is why I like to make music videos.
As our society becomes more image-driven, there is a thirst for shoots and videos of artists. How do you feel about this?
My mum used to work for an acting and modelling agency that she added me onto at a young age. I was in front of camera and on adverts and bits as a kid, so I find it quite normal to have my photo taken. As much as I would like to keep more mystery to my image and make sure the music is always at the forefront, it seems that there is a thirst for people to understand identity alongside music in the whole Instagram culture. I do really struggle with the self-blogging type of Instagram story. The instant gratification of it all is what I do struggle with.
We desire content like fast food, which makes it harder for good art (that takes more time) to reach larger audiences. People don’t have the time to watch a full video and you have to give away the best bits in snippets, which I hate doing. Films, music, podcasts – whatever – is best engaged with fully and in isolation. Artists put so much time into creating works and I think that needs to be respected and cared for in terms of consumption.
Would you say any of your tracks are critical of society?
Not previously, most have been based around introspection or questions on philosophy and science. I do have emotional and poignant views on society at times, so maybe in some future works, social commentary will be more present. It hasn’t felt honest for me to write any political or societal criticism into my music so far.
Emotional openness is sadly still something that can be put into contrast with masculinity. Is this strict definition changing?
It is definitely still a problem but it’s definitely changed a huge amount since I’ve been alive, but then maybe that’s just where I’ve shifted and who I surround myself with. I’ve been lucky to have parents who allowed me to wear my heart on my sleeve but I have seen quite closely the devastating effects of men bottling up emotions. The fact that people openly talk about ‘talking’ is extremely important, especially in the UK, where we feel the legacy of the ‘stiff upper lip’ and lack of concerted cultivation.
I did ballet and theatre from a young age into my early teens, mostly with girls only, and experienced a lot of the effects of toxic masculinity. There is something quite empowering about wearing a leotard and tights in front of guys who get so confused that they curl up into anger – ‘He does ballet, he must be gay, but he likes girls?’ An easy target to ridicule, but I kind of revelled in the ignorance of it.

Paris, Berlin, London – name it, you’re there! What is the most memorable moment from your European tour so far?
Probably has to be cycling on those new electric Uber bikes and scooters through the 11th Arrondissement and along the Seine on a very busy and abnormally sunny Saturday in Paris. Everyone seemed particularly well dressed and quaint. I felt particularly happy in a cloudy hangover remembering the gig and night from before and how lucky that I am finally able to be travelling with music to these interesting places!
How bad is Brexit?
I think how Cambridge Analytica legally manipulated those on the fence to tactically win the election through data is quite sickening and I think Facebook and the companies involved are criminal for having let that slip. The people we have in power are monstrous, and in my eyes, such a sad reflection of our society. To let the likes of Trump and Boris Johnson get into power, people must be really that unhappy with the world, as politicians tap into such rough opinions on things like immigration. The fact that fear is used to divide us and gain power is reminiscent and microcosmic of some of the most wounding times in fascist, totalitarian political and social history.
Brexit will obviously just have to happen now with whatever deal and the negative effects will incur, but hopefully, it will be a lesson not to let the uneducated masses make decisions for the country especially when democracy is now unruly in the face of data manipulation and biased advertising on social media. I think that the media and general public’s ongoing discussions about Brexit should be replaced with more important issues and the solutions for them, such as the impact of global warming and reducing meat consumption.
Tell us about the dynamic in your band.
Gabriel Gifford is my flatmate, band-mate, writer/producer mate – you name it. He’s a very talented fella, very kind, reserved but has a lot of love to give. He’s my ‘self-proclaimed’ utility manager: live he plays the guitar, keys/delays, bass, samples, backing tracks, BVs, percussion, and he’s one hell of a producer and mixing engineer. He has such an amazing sense of attention to detail. We write together and with other people and will be touring Europe in Lucy Lu’s band in support of Loyle Carner at the end of the year. It feels like a nice reflection on our time making music together as the first gig we played was supporting Loyle back in Norwich three years ago this month.
Ben Toon’s [drummer] mind is like no one else’s I have met. It’s hard to explain, but if you imagine Cool 3D world – like that Instagram account with a more engaging storyline... This is a loose representation of where Ben goes. He’s also a monster on the drums – he has crazy groove, feel and is as a talented songwriter. He brings a really interesting angle to some of the rhythm parts. They [the band] hate me sometimes – I’ve been saying I’m going to bring snacks to rehearsal for about a year now. But I think they still come because they believe in the project and the music, which is a beautiful thing that I do sometimes take for granted.
What should we expect at your up-and-coming set at Simple Things?
A few new boppers and three very excitable faces playing in their hometown on a stage with bands we love. 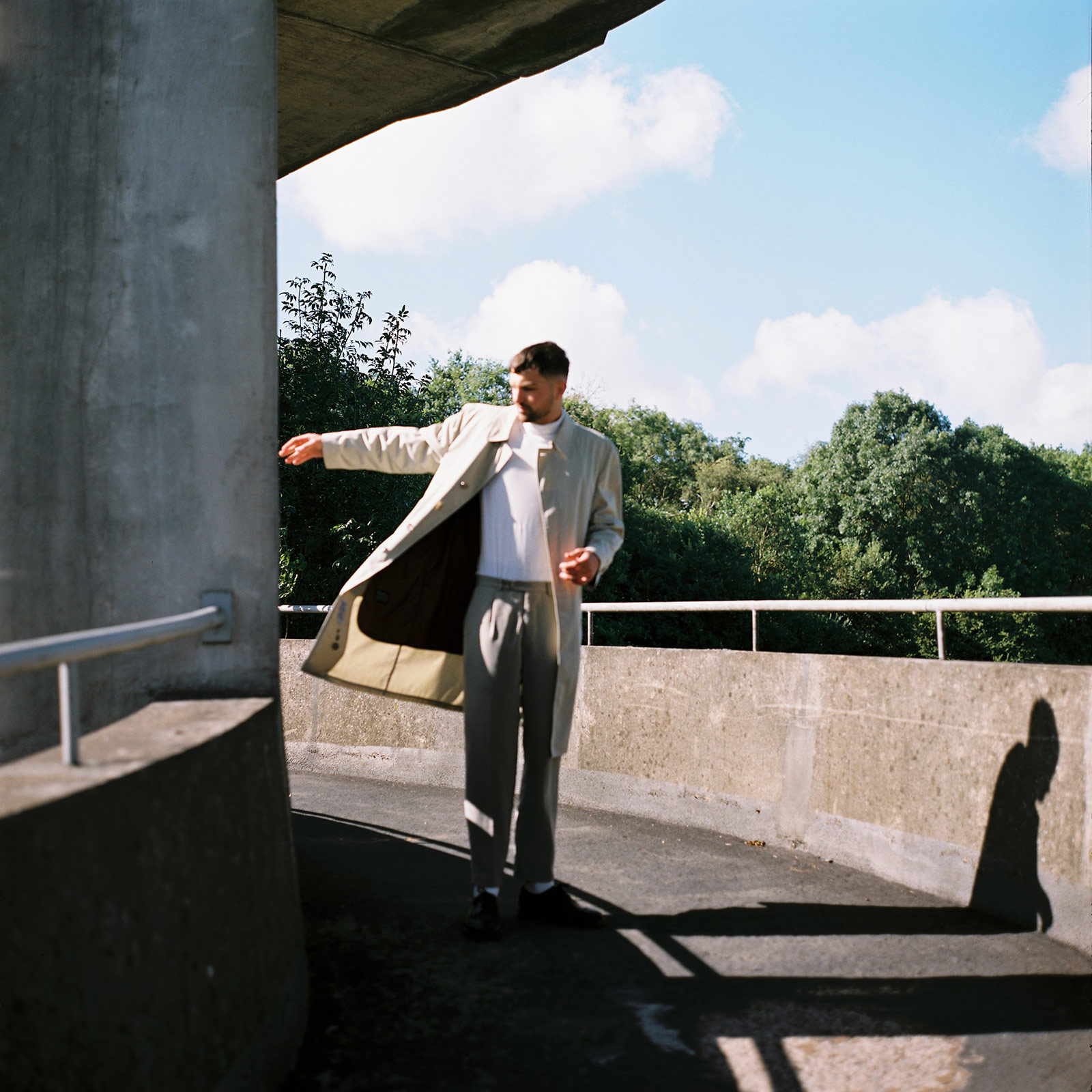 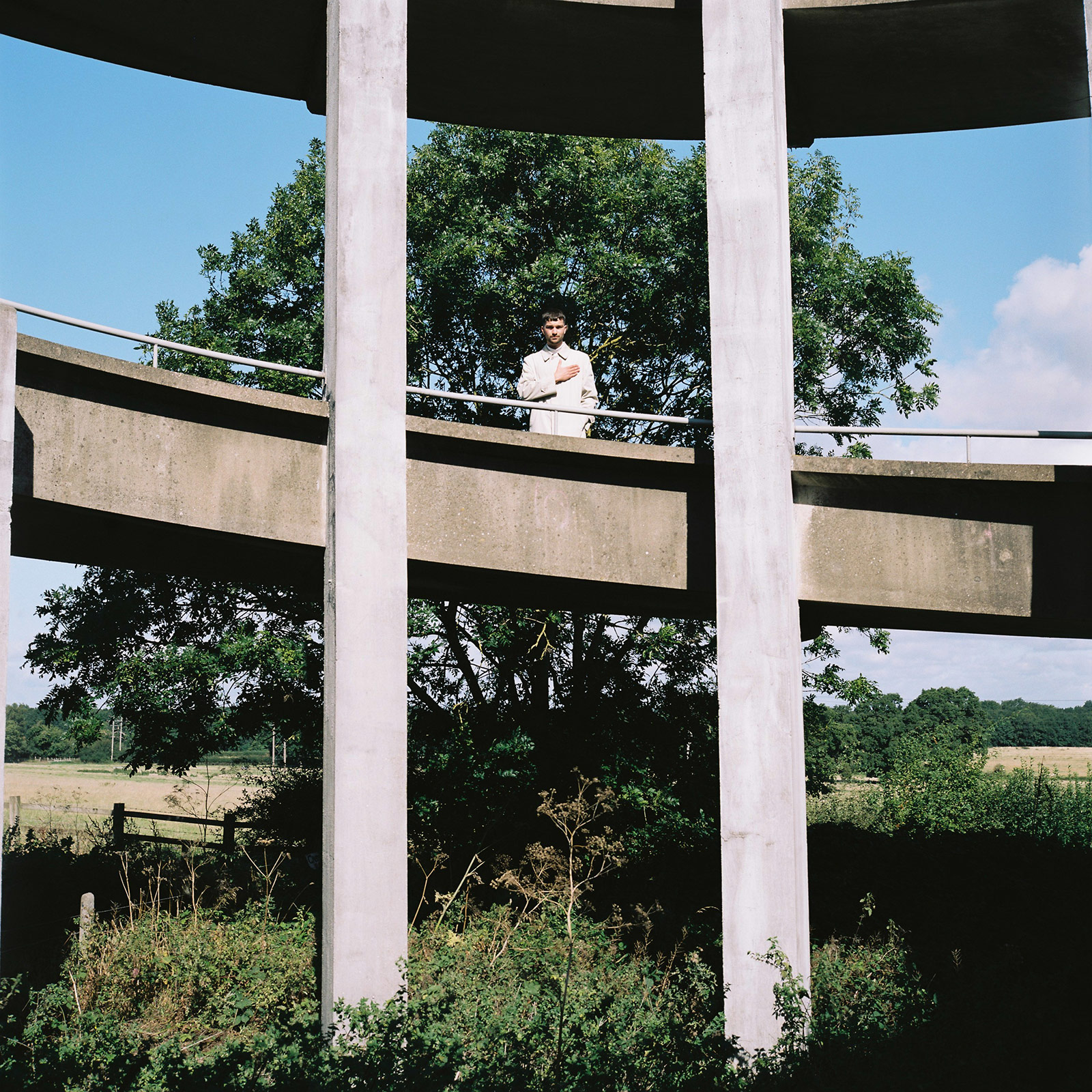 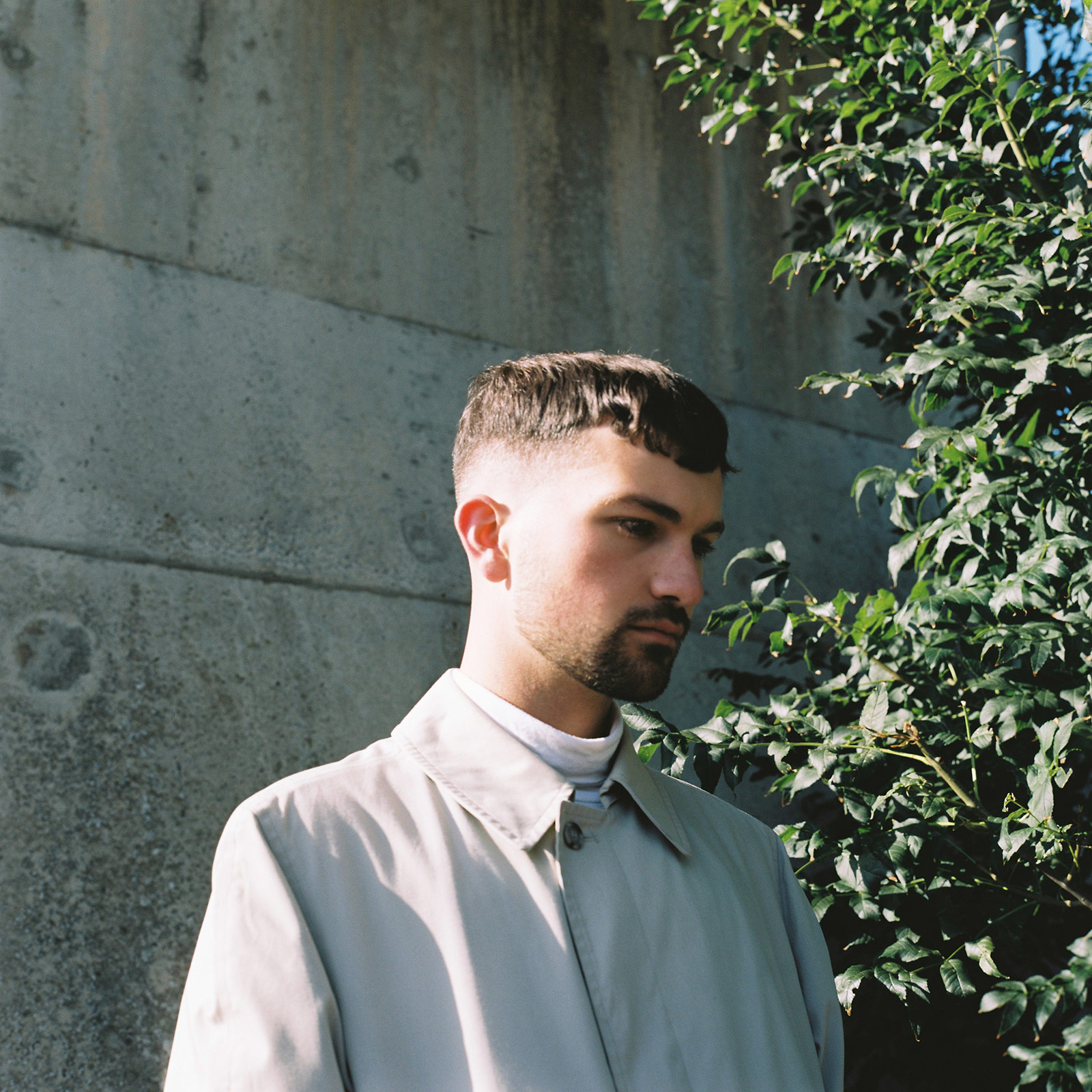