Gypsy music for the world 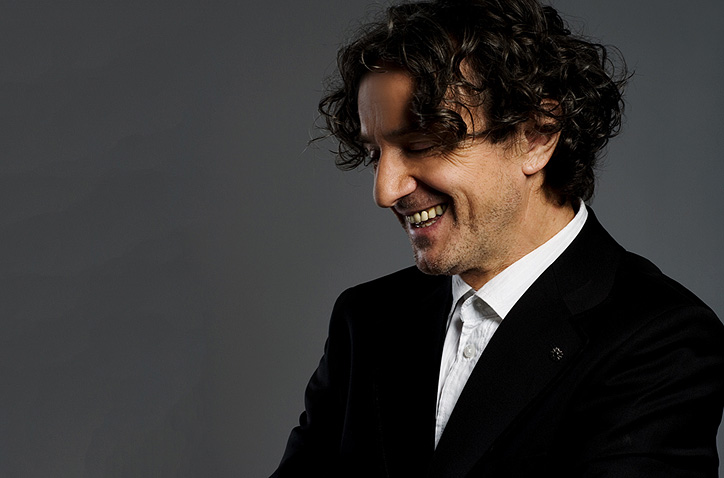 Goran Bregovic will entertain us this Saturday 13th at Festival Jardins de Pedralbes, in Barcelona, as the leader of the Wedding and Funeral Orchestra, his Balkan ensemble. Bregovic was born in Sarajevo in 1950, son of Serbian and Croatian parents. His musical career began when he was only 16 and today he is the biggest rock star in Bosnia – although he prefers to call himself a Yugoslavian. He arrives with the intention to give his best on stage. Bregovic talked to us about what drives his music and life.

Hi Goran. For someone who doesn't know your music, could you define it in five words?

"Contemporary music with a solid structure" and "which is not boring".

What distinguishes Balkan music from other kinds of music?

Balkan culture is a mix of kitsch, violence and over-heated emotions, a culture that has been bypassed by opera and symphonic music. In times when Monteverdi wrote his Orpheus, we were still laboring fields with oxen-driven ploughs, breeding cattle and fishing. And, traditionally, music was played to accompany drinking.
The Balkans in general, and my country in particular, have all oscillated between cycles of wild enthusiasm and profound depression throughout their history – we are very good at both. And oddly, in the Balkans there is a word of Turkish origin that is not translatable into other languages, "sevdah”. This word describes a state of abandonment to feelings and it applies both to sad, dark feelings and to feelings of joy. One could maybe say that the Balkan people have a way of being easily connected with their feelings.

How different is it for you to play in Bonn, Moscow or Paris?

We have performed as West as Seattle, as East as Seoul, as North as Tomsk in Siberia and as South as Buenos Aires. The strangest place where we played – and the biggest audience I had – was in Dyarbakir, at the frontier of Turkey, Syria and Irak, where we performed in front of 250.000 Kurds. But be it to 250.000 people, 2.500 or even 750, I always give the best I have. It’s the only way that I can have fun. If I have fun playing the concert, then the audience also enjoys it.

How different is it to compose music for a movie as opposed to just writing music?

I would say that I always just write music. When I composed music for a film for the first time, Time of the Gypsies, I was probably the biggest rock star in my country. I gave my existing music and also composed new pieces out of the friendship for the director. That music was used for the movies, but was never written by the method that composers use for writing for film, the method of illustration – it existed independently. Today I play my music the way it was written originally, before it was adapted for the movies, so images are not organically linked to that music.

In what way does music affect your personal life?

Music is the essence of my personal life, the same way as my daughters, a beautiful storm out on the sea, or a moment of fooling with friends… Each element is an essential part of a bigger picture, but it doesn't mean it's much separated from the whole.

Gypsy music is influenced by a lot of music styles that range from Viennese waltzes to Jewish klezmer and influences from the music played in the old Ottoman Empire. Are there any elements in your music that you would consider particularly Yugoslavian?

My greatest influence is gypsy music that stems from the army brass bands tradition. Even today gypsy bands still play the same old tattered military trumpets, instruments that are very difficult to tune. That is one of the main reasons why I like to work with these bands – they make me think of early punk, of times before God Save the Queen was recorded, which was the first punk piece made by a serious producer. Punk was touching and human until producers started using elaborate instruments with tuning machines. Punk died after it was tuned. I still find something of that human out-of-tune while playing in my gypsy bands.

Why do you think there is so much interest in Balkan Gypsy music and brass bands?

Balkan music contains very strong and complex rhythms – this is why the audience likes my music. The good thing is that DJs have started to take interest in Balkan music and have opened it up to a younger audience in dance halls. I have heard that half of the audience in my concert at Lincoln Center in New York were DJs. That has a reverse effect and gives us the feeling that the Balkan music also brings something new. Gas-Gas (on my CD Alkohol) is the first song that my record label, Universal, allowed to be re-mixed, and I am very happy about this adventure with Shantel. My arrangements are mostly baroque – it’s not a bad thing that someone simplifies them sometimes.

You were born in Sarajevo, from a Croatian father and a Serbian mother. Did the conflict between both communities affect you and your family in any way?

Fortunately, neither my mother nor father lived to see the war. As for every person from Sarajevo, my life is divided between before and after the war. I was lucky to be in Paris and not in Sarajevo when the war broke out. Why is such a big part in history of art reserved for artists in exile? Because Darwin’s theory is right: the Galapagos tortoises and I prove it equally well.

Make Music Not War: Kalasnikov & Kalashnikov was one of your most representative songs. Do you think music helped to pacify the conflict in some way?

Now I am too old, too far from the times when, out of vanity, I imagined that art could change the order of things. But I am still too young to lose hope!

You give great significance to the instruments at your concerts. How will your orchestra be at Festival Jardins de Pedralbes? Will there be any innovations for your Spanish concert? Tell us about the musicians you are bringing for us.

I shall come with my big band, the Wedding and Funeral Orchestra, which gives me the opportunity to present a large variety of my music and which will be adapted to the beautiful setting of Pedralbes Gardens. There will be nineteen musicians on stage: a sextet of male voices, a string quartet plus my soloists – five brass players, two Bulgarian voices, a singer/drummer and myself. You will hear songs from my last album Champagne for Gypsies, pieces from my opera Karmen with a Happy End, some older favourites and three or four new songs that have not been recorded yet. But I shall also perform some parts of my lay liturgy “My Heart Has Become Tolerant” and pieces from my oratorio Margot, Memoires of an Unhappy Queen.