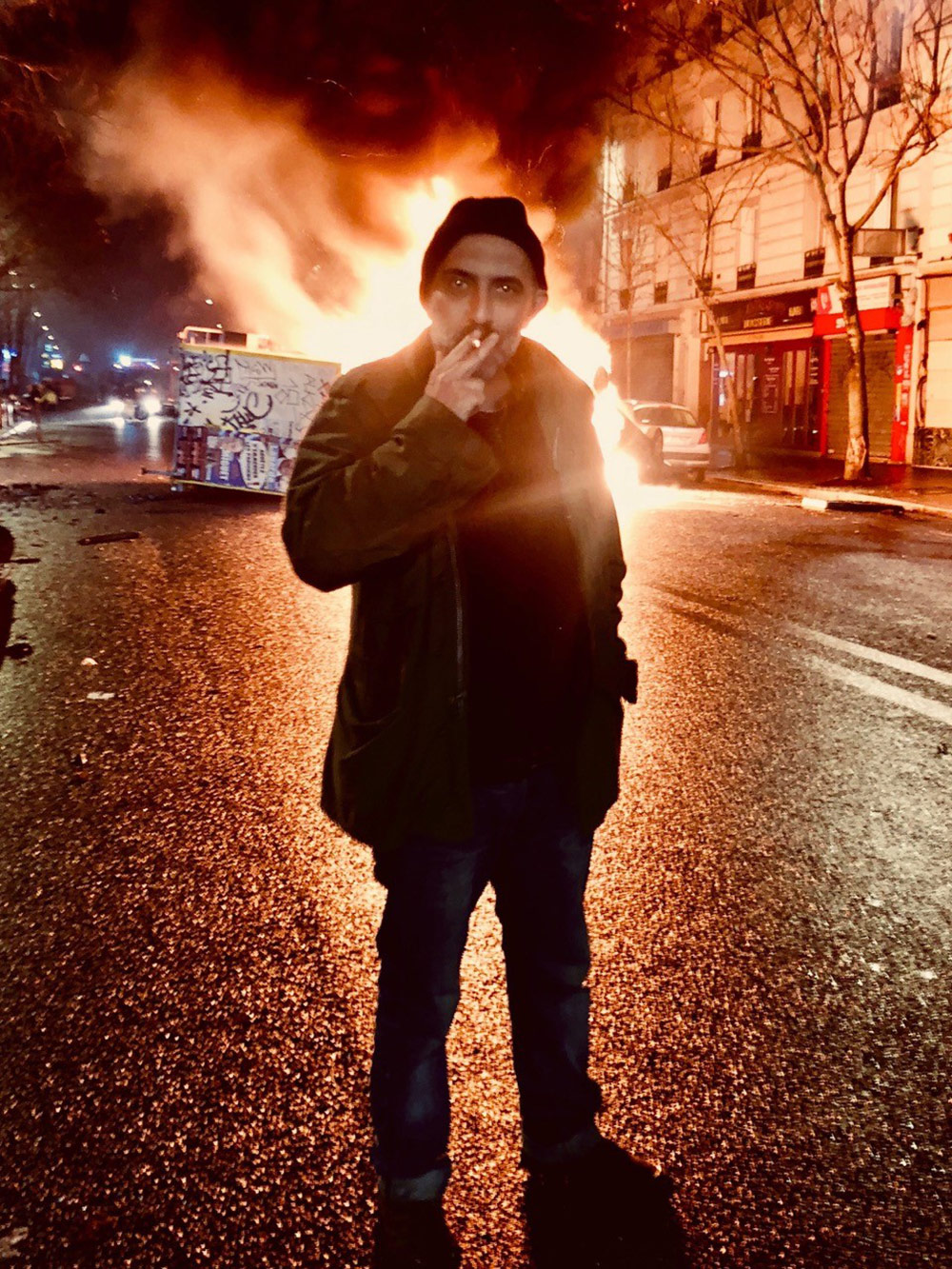 When Saint Laurent approached Gaspar Noé to produce a short promotional video for their new collection, they should have expected to receive an unconventional end result. Inflating the suggested runtime of six minutes to a 52-minute film, Noé recruited Saint Laurent regulars Charlotte Gainsbourg and Béatrice Dalle as his stars.
In perhaps his most meta film to date, Gainsbourg and Dalle play themselves, telling each other stories about witchcraft in between filming a movie together. But in typical Noé fashion, it doesn’t take long for things to take a very bizarre and unsettling turn. After the film’s release at Cannes and before its release in Spain on November 27th, Noé talks to us about his inspirations behind the film and his plans for his next project in a post-pandemic world.

Your new film, Lux Æterna, is a collaboration with Saint Laurent. I’m interested to know how this collaboration came about.
It all happened very suddenly last February. Anthony Vaccarello proposed to me the idea of creating a short film that Saint Laurent would finance – the only condition being that I used the brand’s clothes and actresses who worked with them for their publicity. We shot so much footage in the course of five days that it actually could have become a feature film, but I decided that I wanted to use split screen and make it a 52-minute movie. They never expected that the movie would have such a good reception.
I asked if I could work with Charlotte Gainsbourg and Béatrice Dalle because I knew they’d worked with Saint Laurent, and I love them as actresses. They were a bit worried because the shoot was two weeks later with no script, but they came and we improvised the movie in five days. The only thing we had to prepare was the set, and then it was like a party which lasted for five days.
The plot that I had written was four lines and was about the shooting of a movie about witches that turns very chaotic. At the end of the short film, the lighting system explodes and the lights become stroboscopic. That was almost all I had in mind the day we started shooting. When you work with creative, funny, intelligent people, they come with lots of ideas. So it was like ‘Okay, let’s start. We’re going to shoot your ideas and we’re going to shoot mine.’ The movie is about anguish and chaos, but the truth is on the set it was the opposite: it was very joyful and creative.
This project was supposed to be a short trailer for Saint Laurent’s new collection, and it morphed into your very own 52-minute film. How quickly after agreeing to the project did you realise this was going to turn into a film? Did Saint Laurent require any convincing?
This was supposed to be a promotional project for Saint Laurent to show that they’re helping artists. Before me, Bret Easton Ellis also did a short film with them. They didn’t ask for a movie longer than ten minutes, but I managed to create something that excited me more than the original request. I thought that if I had the actresses, the money and five days to shoot, it would be a pity to make something short when I could deliver a much longer piece. I’m very proud of the result, and Saint Laurent’s team is very pleased too. The film was selected for Cannes and had the treatment of a feature film. Everyone was extremely happy with the result.
I read that your screenplay for Love was seven pages, and that Climax was directed from a few-page outline. Why do you lean towards this style of filmmaking? Do you have a completed idea of what the film will be in your head before you begin filming, or do you prefer for the process to be more spontaneous on set?
It’s like organising a party: you know that if you invite the right people and serve the right alcohol, or if someone brings ecstasy, it’s going to be funnier. Worst-case scenario, the movie will be bad, but at least I’ll enjoy the shooting. Nowadays, I’m not worried about failing in one movie. I’m going to do my very best to make it as interesting as possible, but if I don’t succeed to do better than my last film, it’s not a drama.
Most big directors who I admire have made bad movies. You’re more afraid of failing when you start your career than you are later. Some directors make their best movies at the very end of their careers. You have to lose the fear of not topping yourself.

In Lux Æterna, there’s a conflict between the crew of the film. There seems to be a battle for control over the project. It is clear that as a filmmaker you have a strong vision of what you want each project to be. Do you ever have a hard time collaborating with others when working on a film?
After going to film school and graduating at 19, I started working as a personal assistant director for an Argentinian filmmaker, Fernando Solanas. I discovered something they don’t teach you in film school: being a film director is like running a factory. There is tension. Sometimes, the director and the producer are competing for control. Sometimes, the actor thinks he is the centre of the factory.
When you’re making short films with your friends, you don’t see this. The more money involved in the production of a film, the more tension. People who pay think they’re the bosses, and whoever gets paid is the slave. In the film industry, especially the art film industry, people still believe in cinema almost like a religion. When it comes to the commercial, it’s horrible. There are very evil people in the industry.
Is this why you prefer to stay in Europe with your films? The United States is often perceived as having a more corporate, mainstream film industry.
Yeah, I think also the platforms within the industry can be very castrating in terms of freedom of speech. There’s more fear in the world now than there was twenty years ago. The hippie times are over. You could joke about a lot of things, but now things are getting more tense. I don’t think I could work in the American system unless some billionaire gave me the money to make a movie freely.
What I like about making movies in France is that I make them with producers and distributors that give me a lot of freedom. They offer less money, but I get to have more fun in the little playhouse they make for me.
Can you tell me a bit about your inspiration behind Lux Æterna?
At the beginning of Lux Æterna, there’s footage of two movies about witch-hunting. One is called Häxon, a Danish silent documentary about witch-hunting during the inquisition. I always thought I’d like to make a film about that period one day, but it’s very hard to make a movie that is as cruel as those times were. Nowadays, people are afraid of portraying violence on screen and of insulting religions. At that time, men were burning women in the name of God, which is quite close to things that are currently happening outside of Europe.
Another quite evident inspiration is Pasolini’s short film La ricotta. It’s about a director filming Christ’s death on the cross, but focusing on the people on set having fun whilst portraying the crucifixion. I was also inspired by strobe light experimental films and movies that used split screen, such as Brian de Palma’s. I’m a big film buff; my main passion is consuming good movies, and if I run out of good movies I just rewatch old classics. I care much more about what film I’m watching in a day than what food I’m eating.

In your last film, Climax, several VHS tapes could be seen which I took to be inspirations for the film, or at least inspirations for you more generally. A couple that stood out to me were Possession and Suspiria. These are horror films, and although your films can be deeply unsettling, you don’t describe them as horror. How would you describe the films you make?
I would say I was mostly drawn to cult films as a teenager – Cronenberg’s Shiver, Pasolini’s Salò, Lynch’s Eraserhead. I don’t know if mine are cult movies, but those were the ones that I was running after as a teenager.
You’re well known for not being overly interested in the critical response to your films. What is your relationship with reviews?
I like bad reviews. Some of them are my favourites, especially the ones that become very insulting – and I have many of them. Sometimes it’s one entire page of insults… I send them to my friends more than the good ones, not because I respect what they’re saying but because I find them funny. When people insult you, you get an adrenaline rush.
So you prefer bad reviews over good reviews?
They’re funnier. The ones that are insulting say more about the critic than about the movie.

You’ve created such a strong body of work over the last few decades. I was wondering how far in advance you plan out your filmography. Do you already know what you want your last film to be, or when you want it to be?
No, but I started writing something that I hope can be filmed soon. It’s very much linked to the reality of the production system under Covid-19. Everyone is writing film ideas that you can shoot on one set with two characters. You can’t shoot bar or club scenes, but you can shoot documentaries or very intimate movies. It’s hard to make a film with a big crew right now. I’m not sure that this project I’m writing will be the next, but it’s a very intimate project that could be shot in an apartment.
What was your planned release schedule for Lux Æterna, and how did Covid change those plans?
Well, when we shot the film, we didn’t even think of theatre distribution. It was released in France a year after filming. The big American movies had been removed from world distribution because they were afraid of commercial failure, so the French theatres didn’t have anything to screen. So this film, which isn’t even a feature, was screened in all the best theatres in Paris – and it was very successful! It was much more successful than it would’ve been in regular times… What’s going to come next, I don’t know. It’s coming out in Spain (November 27th), Germany and Russia, then probably on streaming platforms. 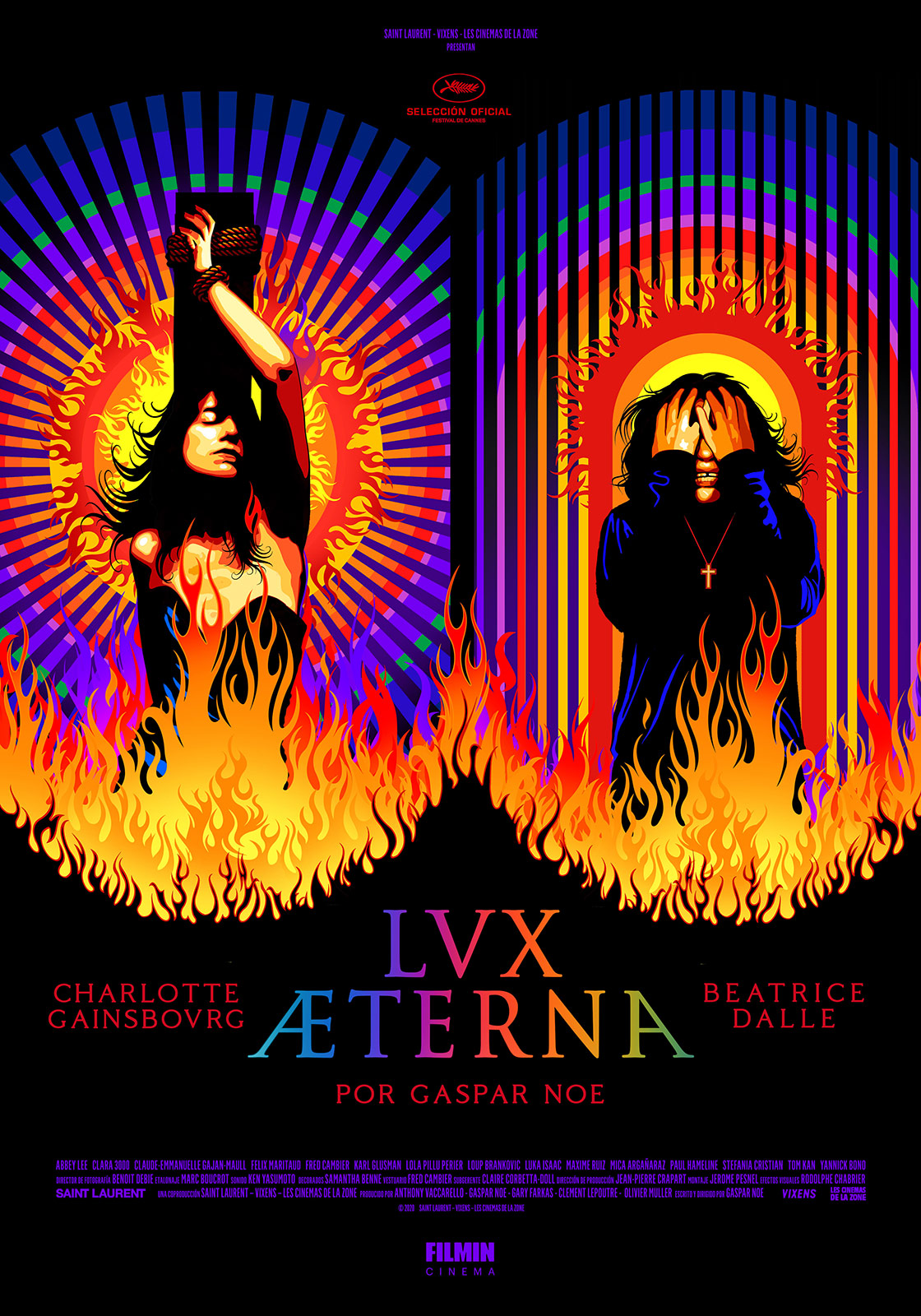