Taking place at Antwerp’s MoMU, a new exhibition focuses on the innovativeness of Cristóbal Balenciaga (1895-1972). His work, tremendously evocative nowadays, continues to influence a myriad of contemporary designers who see him as a never-ending source of inspiration. The exhibition reflects how they have echoed back the Spanish designer, an essential figure in the Parisian fashion scene of the 20th century. Miren Arzalluz, one of the leading and more knowledgeable voices in the work of the master, sheds light on the vast influence left by the Basque designer on the modern silhouette, how influential Balenciaga’s work has been for other creative minds of the century, and the extensive adaptations that has progressively experimented the woman’s figure ever since.
First of all, what are we going to see at the exhibition? What is the main focus when approaching something as changing as the feminine silhouette?
The exhibition aspires to explore the process through which a new and unprecedented silhouette emerged in female fashion during the 20th century – new shapes which freed the body from previous constrictions, broke with established notions of beauty and femininity, and offered women a new way of seeing and experiencing their way of dressing. We are trying to convey this idea through the work of a group of game changing designers who were committed to establishing a new relationship between body and garment, from Vionnet and Chanel, to Kawakubo or Margiela. Balenciaga plays a fundamental role in this genealogy of silhouette innovation in the 1940s, 50s and 60s, linking the early innovators with the iconoclastic designers of the late century.
What are you hoping to unveil to the public’s eye? What kind of spectator is the exhibition addressing?
As in all fashion exhibitions, we are hoping to attract a wide audience, from fashion students interested in technical and conceptual innovation, to visitors who are interested in learning more about women’s liberation throughout the 20th century. 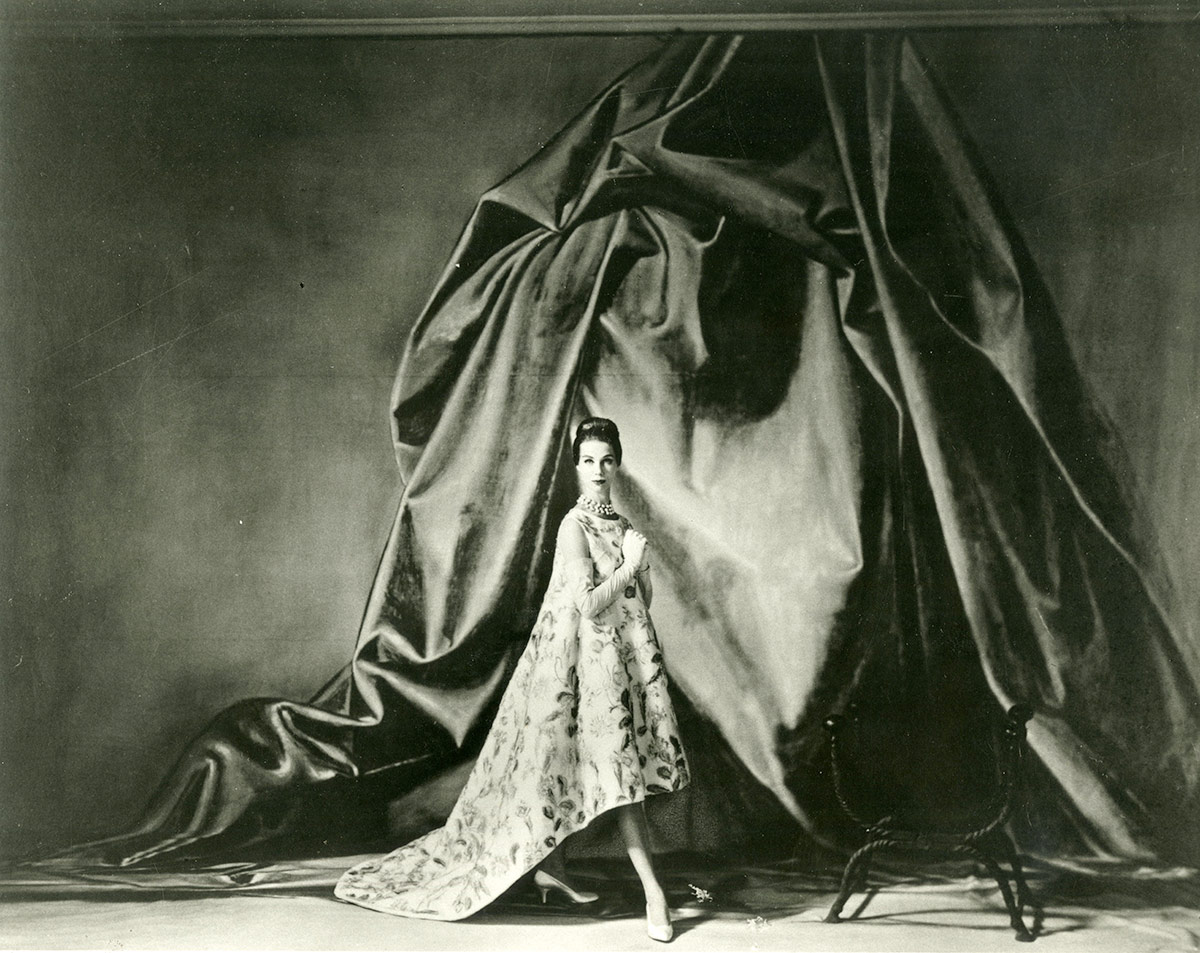 Cristobal Balenciaga, A/W 1958, Photo: Tom Kublin, Courtsey: Balenciaga Archives
Balenciaga is presented as the pivotal figure of 20th century fashion, surrounded by the technical mastery of Vionnet or the contemporary envisagers of the modern era, such as Kawakubo or Margiela. How are you going to present such similar, but at the same time different, ways of approaching Balenciaga’s legacy? Have there been difficulties when agreeing to unite these different voices and establishing an overall language?
We would like to present Balenciaga as a key and fundamental piece in this chain of silhouette innovation. We are not interested in glorifying his work or in picturing him as an isolated genius, but rather as someone who was influenced by ideas and designers that preceded him and, armed with his characteristic mastery of technique and his iconoclastic spirit, pushed fashion and form forward, influencing what was to come in the next decades. He is the missing link of the mid 20th century, the last of the modernist couturiers, the first of the conceptual designers.
In that sense, how has the process of selection of the garments been like? What sort of criteria have you followed in order to ensure a proper lecture of what’s contemporary and relevant from what is not?
It’s been difficult, as it always is when you are addressing an ambitious subject. Of course there are many other designers whose work can be considered ground breaking when it comes to experimenting with form, but we have decided to select those who have made of rethinking the female body a lifelong commitment.
How radical was Balenciaga in departing ways with the titans of his era, such as the revolutionary Dior?
I would say he was truly radical in his own time, paving an alternative way to the ever dominant New Look, although he never risked being placed at the margins of the haute couture system. He pushed fashion forward just enough to become one of its most prominent leaders, combining his radical vision with the widely accepted norm. However, his was a progressive experimentation, which initiated in the early 1940s and ended only with his retirement in 1968. Balenciaga worked with a small set of ideas that he kept coming back to and subjecting to progressive refinement. Very often, he introduced a radical silhouette that seemed to be ahead of his time, like the so called sack dress of 1957, and he would revisit the sack in consecutive seasons with more “moderate” versions that came to be seen as “acceptable” by his rather conservative clientele. 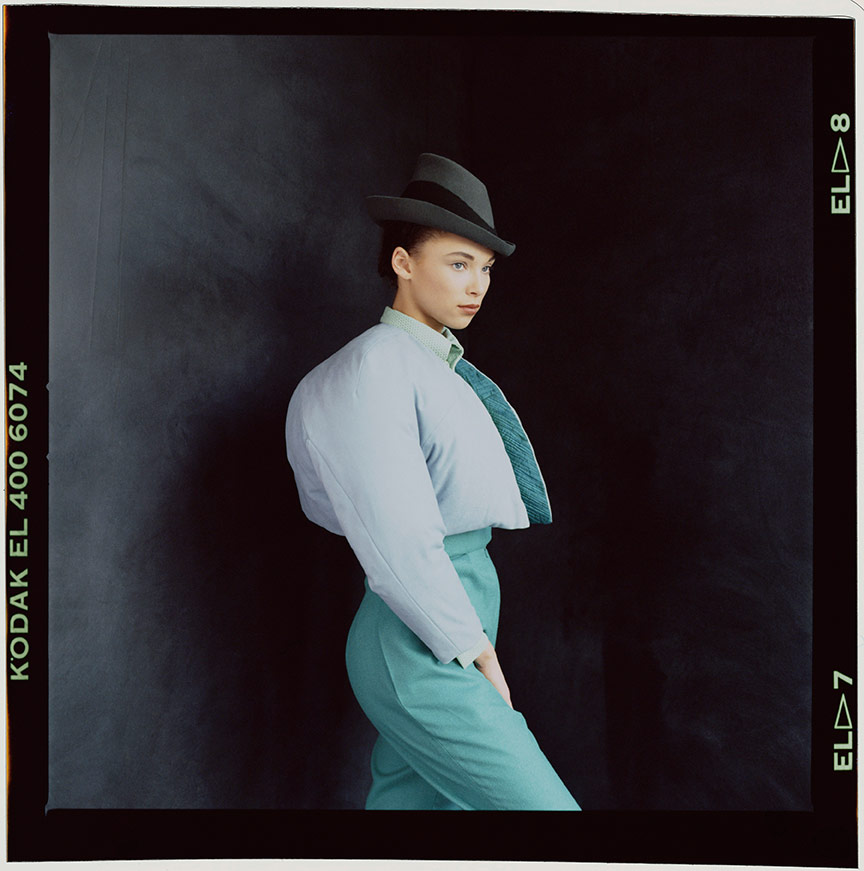 Georgina Godley, Sport Couture, A/W 1990, Photo: Georgina Godley
And how do you feel his legacy is seen nowadays? Some key figures in contemporary design have acknowledged Balenciaga as one of their true references. Why is it that, after so much time, he is the one pretty much everybody can relate to?
In historical terms, Balenciaga’s innovations took place in very recent times. He exerted a profound influence on his contemporaries, but it is equally true that he was rejected and disapproved of at the end of his career, in the late 1960s, when his most abstract and sculptural creations seemed out of touch with the youth revolution and the needs and demands of the new generation. Balenciaga’s work started to be reconsidered in the 1990s, with a renewed interest in couture and the debate around fashion and art more heated than ever. It is only natural that this Balenciaga “renaissance” would inspire a new generation of fashion designers forged or consolidated from the 1980s to the 2000s.
It is curious to see how Kawakubo or Margiela share the very same phobias of Balenciaga and the complex relationship he maintained with his work. Are these aspects going to be shown as one of the key things all these creators have in common?
It is always difficult to bring aspects related to the designers’ personality or relationship to their work in the exhibition. However, my colleague and co-curator of the exhibition Karen Van Godtsenhoven has addressed in depth the diverse design practices of some of these game changers in her article for the exhibition catalogue, published by Bloomsbury. Karen engagingly illustrates how design methods inform the way these designers look upon the relationship between body and garment, and how this translates into a specific attitude towards the female body.
What kind of transformations is the feminine silhouette experimenting in these moments? It seems quite difficult to think about it, in a field dominated by ever-changing trends and a sort of commercial distortion.
As you say, it is extremely difficult to discern clear silhouette trends in the characteristic diversity of the contemporary fashion scene. We were also intrigued by the way this process came about, this proliferation of shapes that replace one another at breakneck speed. It is also the aim of the exhibition to understand the “postmodern” eclecticism of contemporary fashion, as Elizabeth Wilson would call it. However, I’m sure that, in a few years, historical hindsight will enable us to identify a limited range of trends that were taking place at our own time, however overwhelming fashion might seem to us right now.
And would you say we’re looking back at Balenciaga’s innovativeness because of the current saturation of lack of inspiration in the fashion world?
I think an active search for sources of inspiration does not imply a lack of creativity on the part of contemporary designers. Balenciaga is unanimously hailed as one of the most influential designers of the 20th century, and his work is always a legitimate and stimulating technical as well as aesthetic reference. 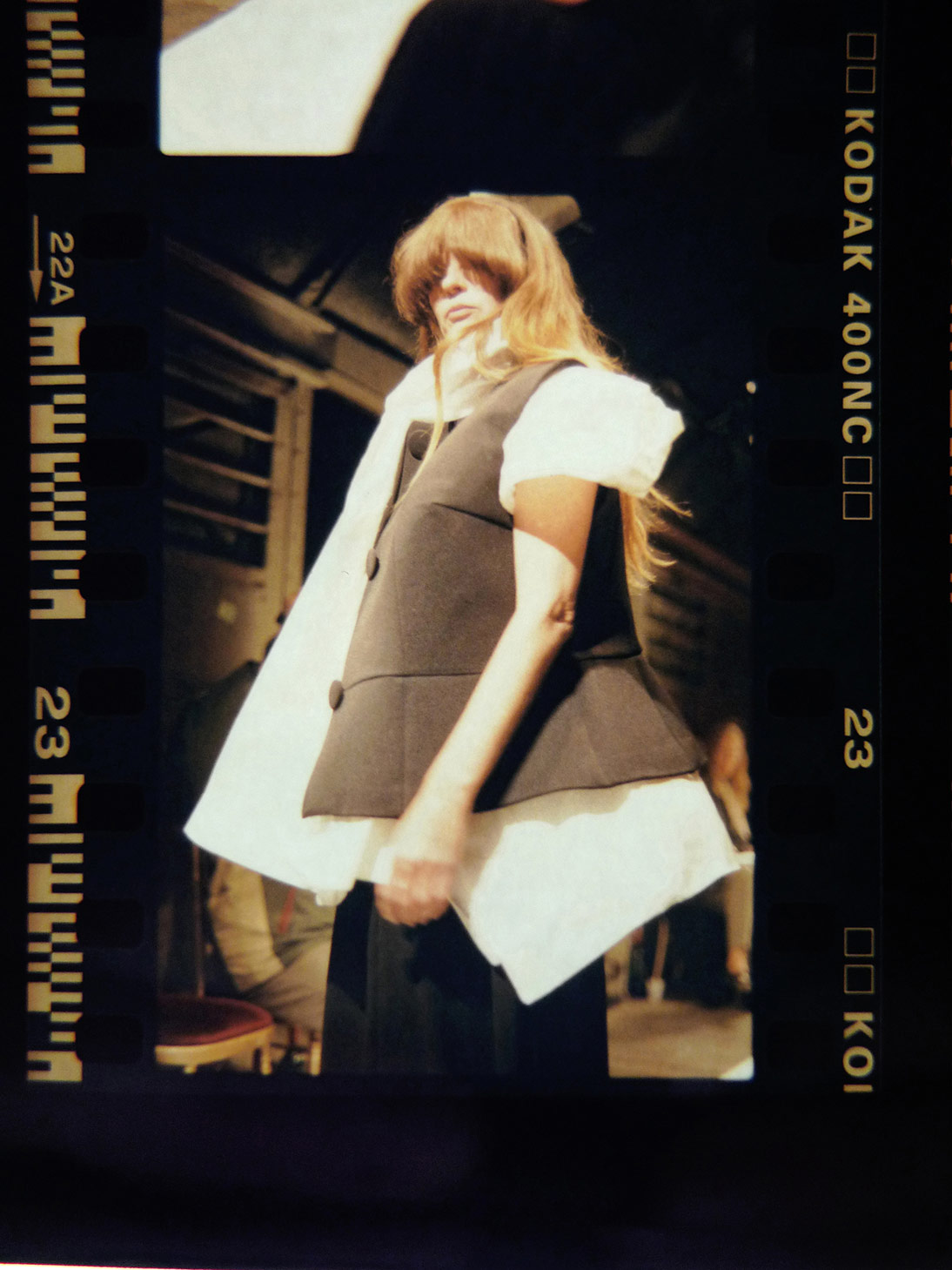 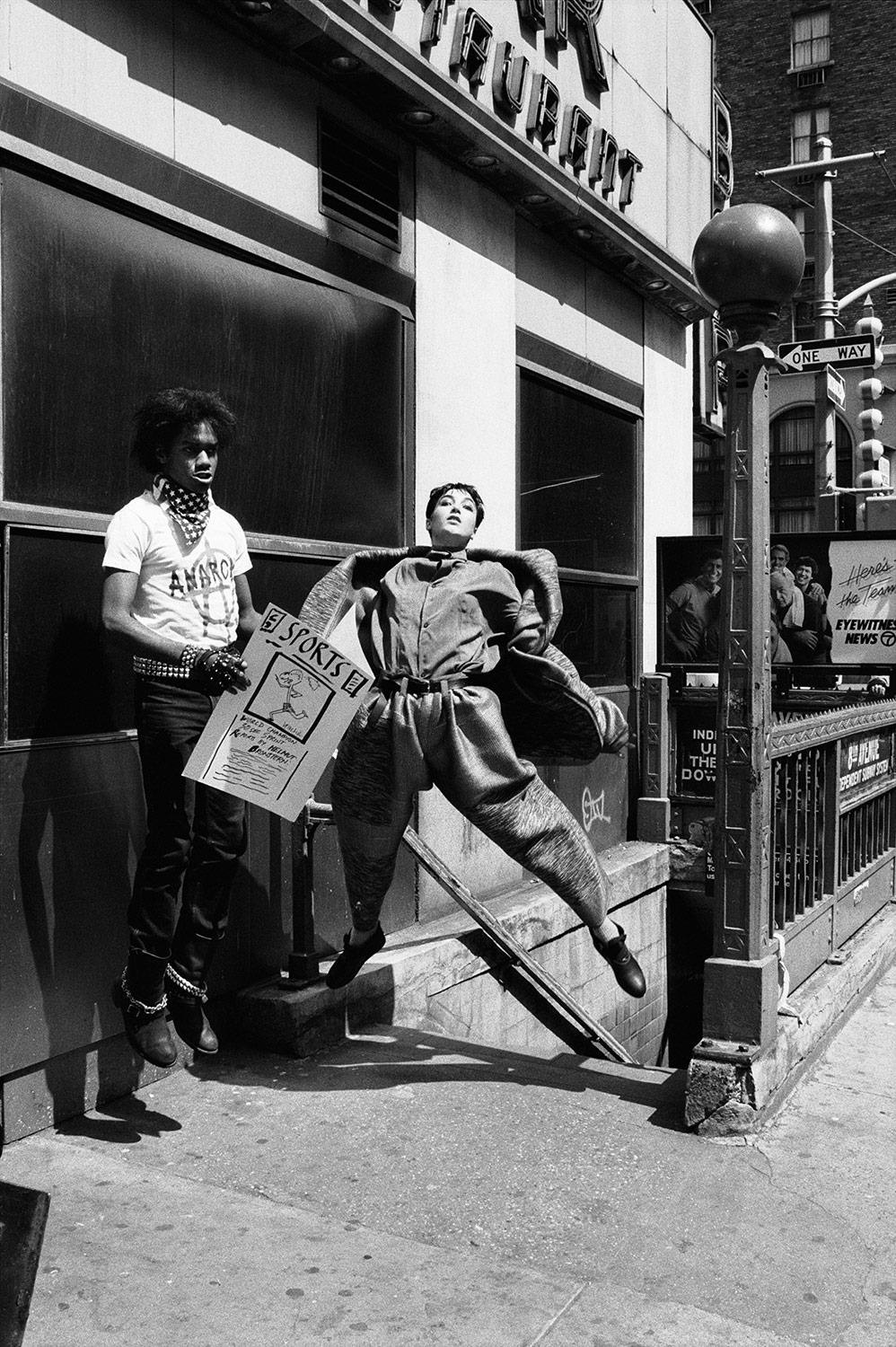 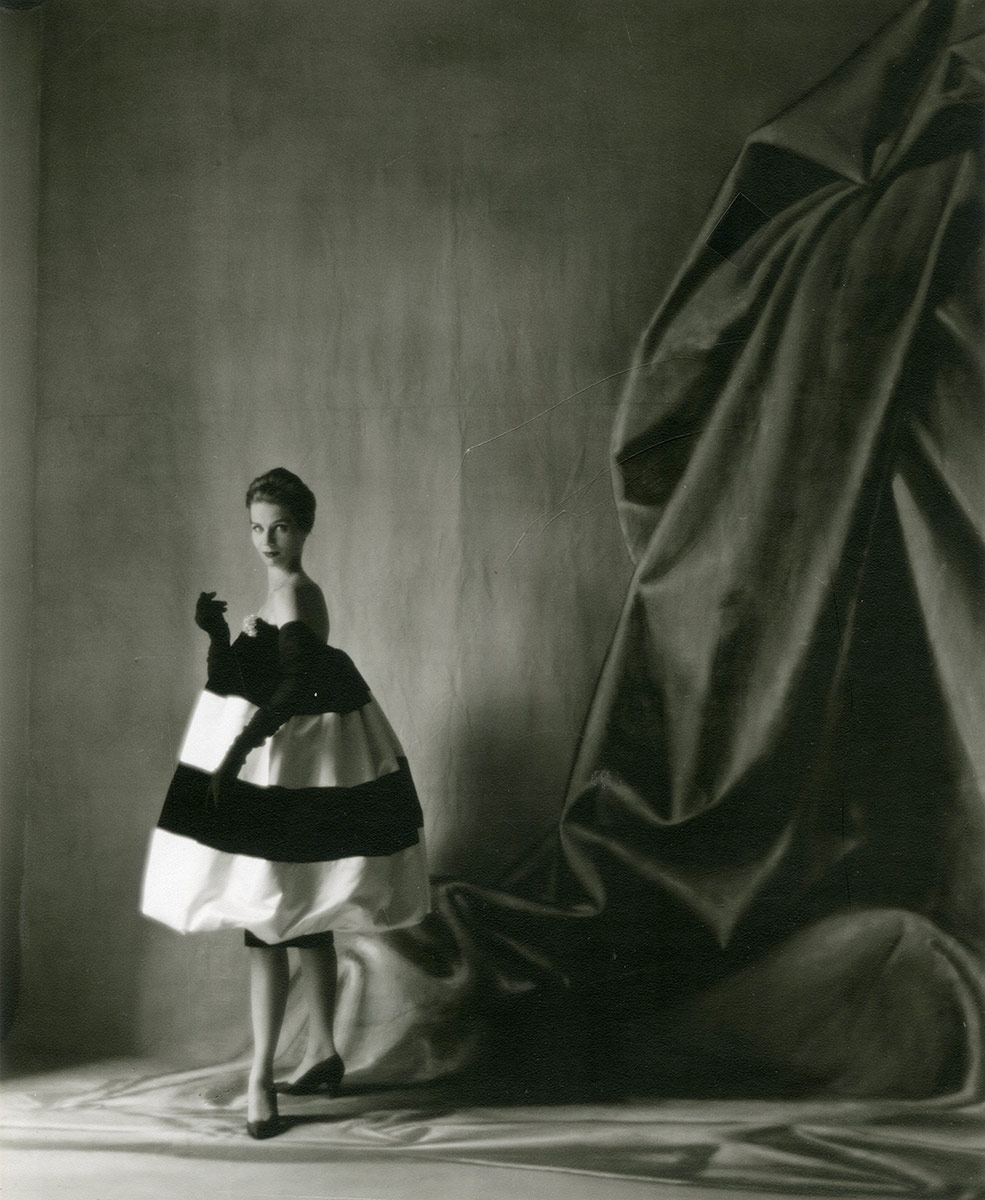 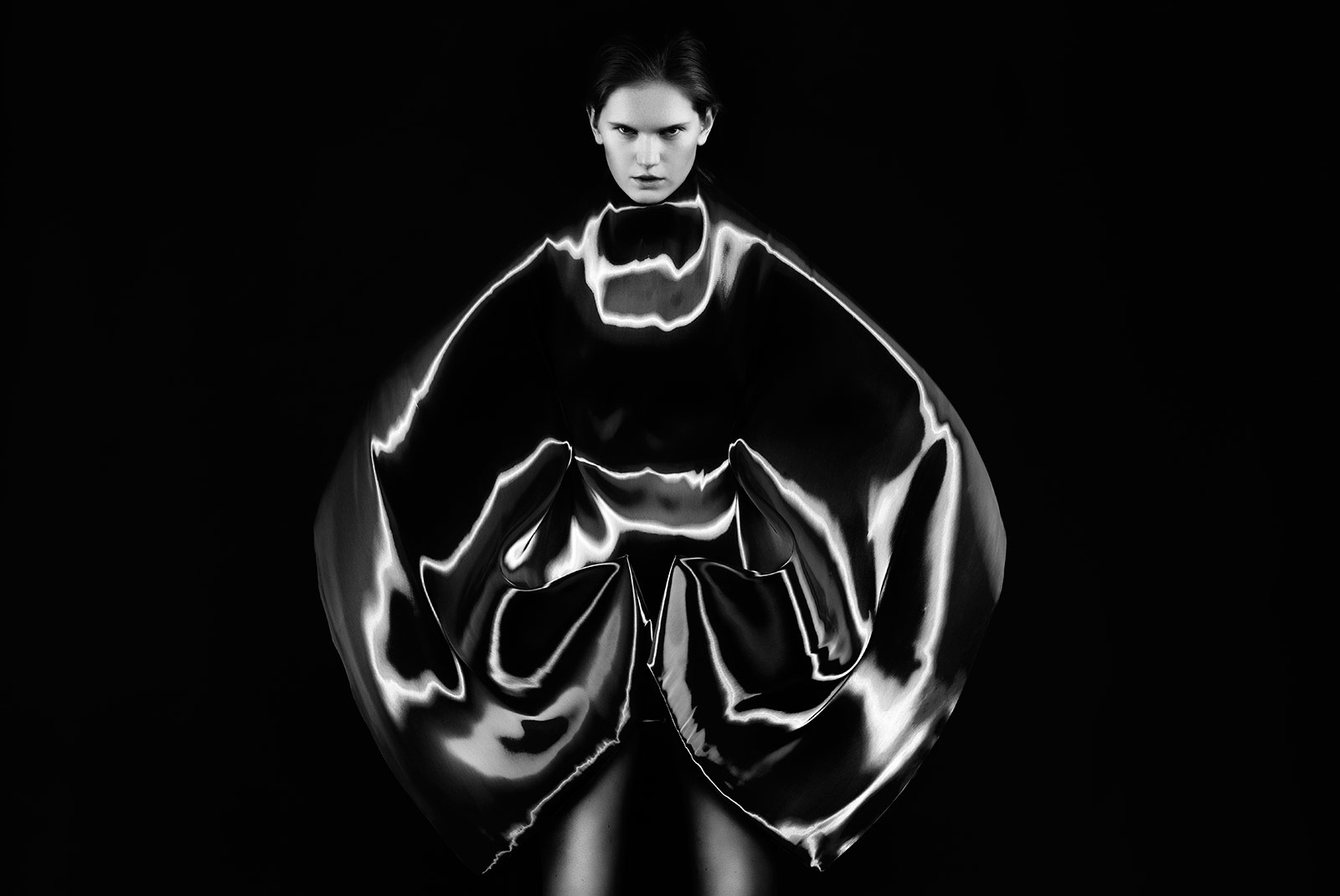 Game Changers. Reinventing the 20th Century Silhouette can be seen at MoMU from March 18th to August 14th.