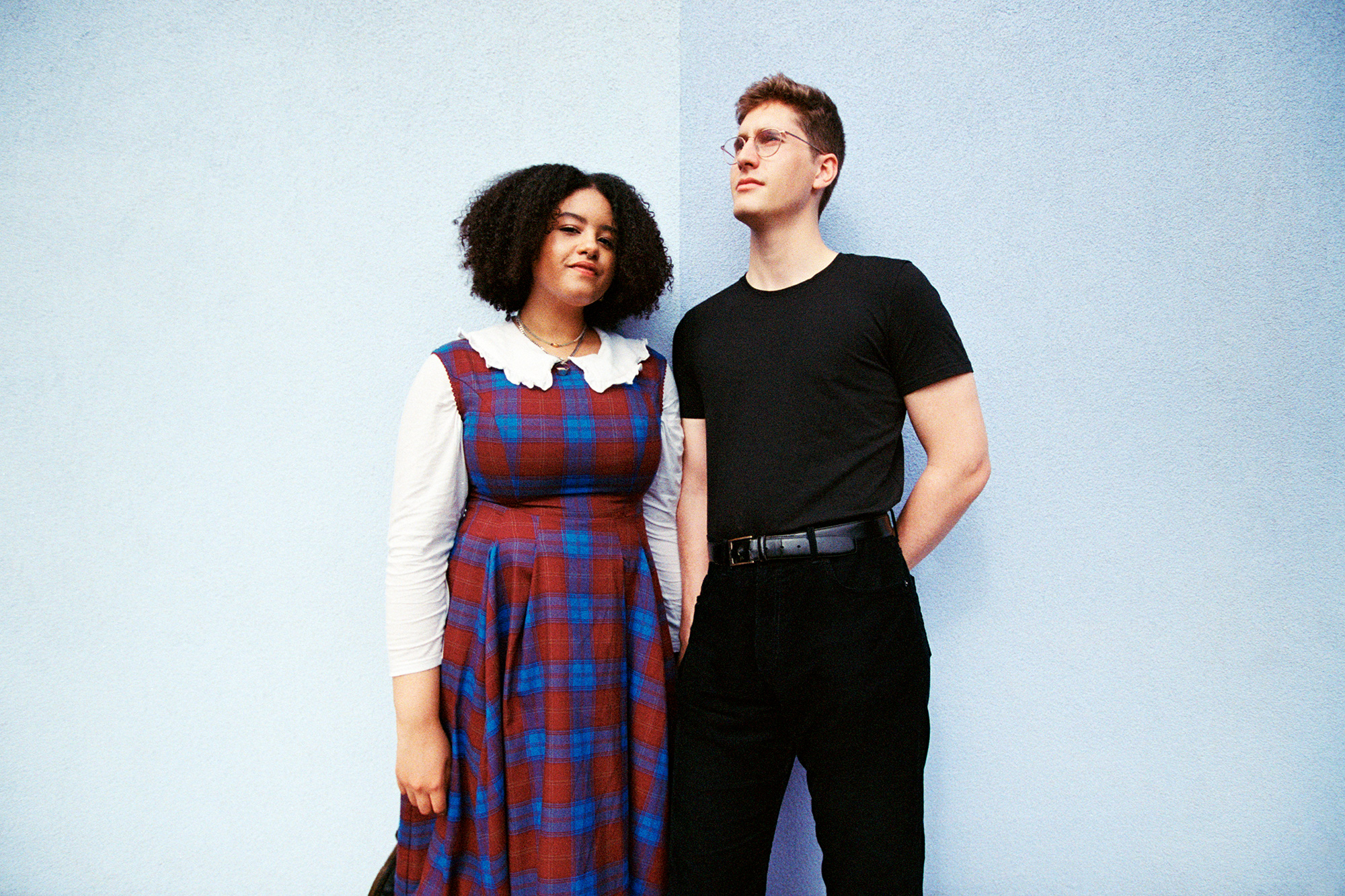 Who could have told Joni Samuels, vocalist, and guitarist, and Karsten van der Tol, drummer, that what started as a casual impulse to form a band would lead to them selling out the Brixton Windmill, famous for launching small acts into stardom. Fräulein sure has shaken up the British post-punk scene. Following their new double A-side release By The Water / Belly, we speak to them about 90s aesthetics, analogue recording, and their charity singles.

Hi Fräulein, fancy having you here! Since it is your first time in METAL, how about telling us the most important thing to know about you?
Thanks so much for having us, honored to be here! The most important thing about us? That if you ever make it to one of our gigs, bring some earplugs.
Born in Northern Ireland and The Netherlands, you both met at a mutual friend’s party in Bristol in 2018. Who had the initial idea to perform together and how was the band-shaped?
Joni: The party was full of musicians and I definitely went into it intending to find someone to play with, whether it be a bassist or a drummer! Karsten came to the party a few hours late, we were all already jamming. Him and a friend convinced me to play a song I had written, which was the first time anyone but my housemates had heard any of my music. Karsten accompanied me on the cajon and we clicked right away, but it wasn’t until later that we talked about forming a band.
Karsten: I think it happened very organically and that something grew out of our separate understandings of music, which when put together complemented each other. We practiced in my living room once a week for about a month after we initially met, sharing musical inspirations, ideas and generally getting to know each other. Joni and I both expressed interest in being in a band beforehand, so it all happened very naturally!
At first sight, we can tell the 90s and 80s aesthetics are a big part of your visual identity. What artists from those eras inspire you the most?
Joni: The White Stripes were the first band I was a mega-fan of when I was about 11. In my early 20s, I became completely obsessed with bands like PJ Harvey and The Breeders. That was when I started playing guitar, and I was really attracted to the simplicity of these incredible songs, and it just kind of made sense that that was the music that influenced me. Visuals back then were so cool, experimental and bands didn’t take themselves too seriously, so I definitely am inspired by that!
Karsten: I always have and still do listen to a lot of 90s rap. Artists like Biggie Smalls, Mobb Deep, A Tribe Called Quest, Wu-Tang Clan, Hieroglyphics are really burned into my mind, visually and auditorily. The image of Q-Tip sitting in the back of a car for the music video of Electric Relaxation felt like an honest representation of him and the time he was making music in. I think the honest nature of the 90s era is something we wanted to bring to our music and show who we are as people through our visuals.

Talking about the 90s, the most famous music from that decade are synth-based or garage. You have your own style that isn’t extremely grunge but still has a raw touch. How did you come up with your signature sound?
Joni: I love raw guitar-based music as mentioned, so that has definitely influenced my guitar-playing. But I also love Patti Smith, David Bowie, Joni Mitchell, Jeff Buckley, Adrianne Lenker, to name a few. I listen to stuff from all over the place, so that all seeps in probably. I’m more just focused on trying to write a good song and getting across a specific emotion, rather than genre or style!
Karsten: I agree with Joni, definitely. I try to play parts that slot in or around Joni’s guitar and vocals, focusing on what sounds good to my ears relative to her. I’ve listened to a lot of math rock, so I feel quite comfortable around weird time signatures and odd rhythms, which Joni has plenty of. But, because Joni isn’t sweep-picking arpeggios at 240bpm, I get to play around with my parts a bit more, which gives me a lot of creative freedom! As I said earlier, I think our styles complement each other.
Also, you’ve collaborated with producer Ben Auld, who you’ve said is one of the main reasons you record using analogue. What are your other reasons to record analogue?
Karsten: It just kind of lined up quite perfectly! We knew that a lot of our influences from the 80s and 90s were mainly recorded to tape, we loved the warmth that tape gave to recordings, and we were looking for producers at the time. That’s exactly when Ben sent us a message out of the blue saying he had a Tascam tape machine that he thought would fit well with our sound. We very excitedly said yes and got in the studio with him not too soon after!
Joni: We’ve tried recording loads of different ways, but we have found that recording the instrumentals live and at the same time is the best way for us to work. We can lock into each other and feed off each other’s energy, like in our live set! Recording to tape really compliments this, we think.
You debuted this summer with the single Pretty People, which quickly received tons of praise. Now, you’ve released a single formed by By the Water and Belly. How has the reception been so far?
Joni: We’ve been so shocked by the response for all of the singles so far, to be honest! I’m happy if even one person listens, so it’s been incredible. I think one of the craziest things to happen is getting Belly played on KEXP. I’ve been watching their live sessions for years, so that was a huge one for me.
Karsten: It feels strange to wrap our heads around it. The response has been so positive and people are enjoying the music that we’re making: that’s all we can ask for at the end of the day. So, if you’re listening, thank you. Selling out The Windmill Brixton for our first headline was incredible, an experience I won’t forget any time soon.

If Belly is about creative frustration, By the Water is about romanticising the past no matter how dark it was. What was the motive behind the decision about writing with those ideas in mind?
Joni: I just write from a very personal place, I don’t know how else to do it! I’ve always kept a journal and I’ll write giant essays about events or emotions I’m feeling. The lyrics are essentially ripped from journal entries, with some embellishment, or manipulated to fit with a riff that matches what I’m feeling. Maybe as I grow as a songwriter and get more experience, I’ll be able to get more creative with it.
So far, you’ve already performed at iconic British venues such as The Windmill and The Old Blue Last. Also, we’ve seen you at festivals such as Sound City Ipswich. What are other places you’d love to play gigs at?
Joni: Hopefully sometime in the future, I’d love to play Brixton Academy and the Roundhouse in London. These are venues I’ve seen my favourite bands play in, so I would be honoured! Also, I’d love to play a show in one of the venues I frequented when growing up in Belfast, like Limelight or the Ulster Hall.
Karsten: Being Dutch, I’d love to play in Amsterdam’s Paradiso. When I lived in the Netherlands, I was too young to go to gigs there. When my brother would say he was going there, I would always get really jealous. Playing there would be a dream come true!
Prior to making your official debut this year, you’ve taken out demos of original songs through your Bandcamp profile. Will we hear them on a future EP?
Joni: Definitely! We self-recorded the demos ourselves in our bedrooms during lockdown last year, and really just wanted to release something to raise a little money for The Black Curriculum, an amazing charity in the UK. But these are songs we still play live to this day! They’ve changed a lot though, so future recordings will be very different from those demos.
Karsten: For sure, it was a great project to have for ourselves during the first lockdown.
What’s next for Fräulein?
Joni: Personally, I want to just keep getting better at songwriting and I want to learn how to shred! And hopefully next year, we’ll get to go on a tour with another band around the UK. Playing live is my absolute favourite thing to do, and this would be so fun!
Karsten: For myself, I’m focusing on improving my drumming abilities, I’ve been doing a lot of practice recently. For Fräulein, we’re going back to the studio at the end of the year, so you can expect something soon. And, of course, plenty of gigs. Keep your eyes and ears peeled!