The beauty of bones 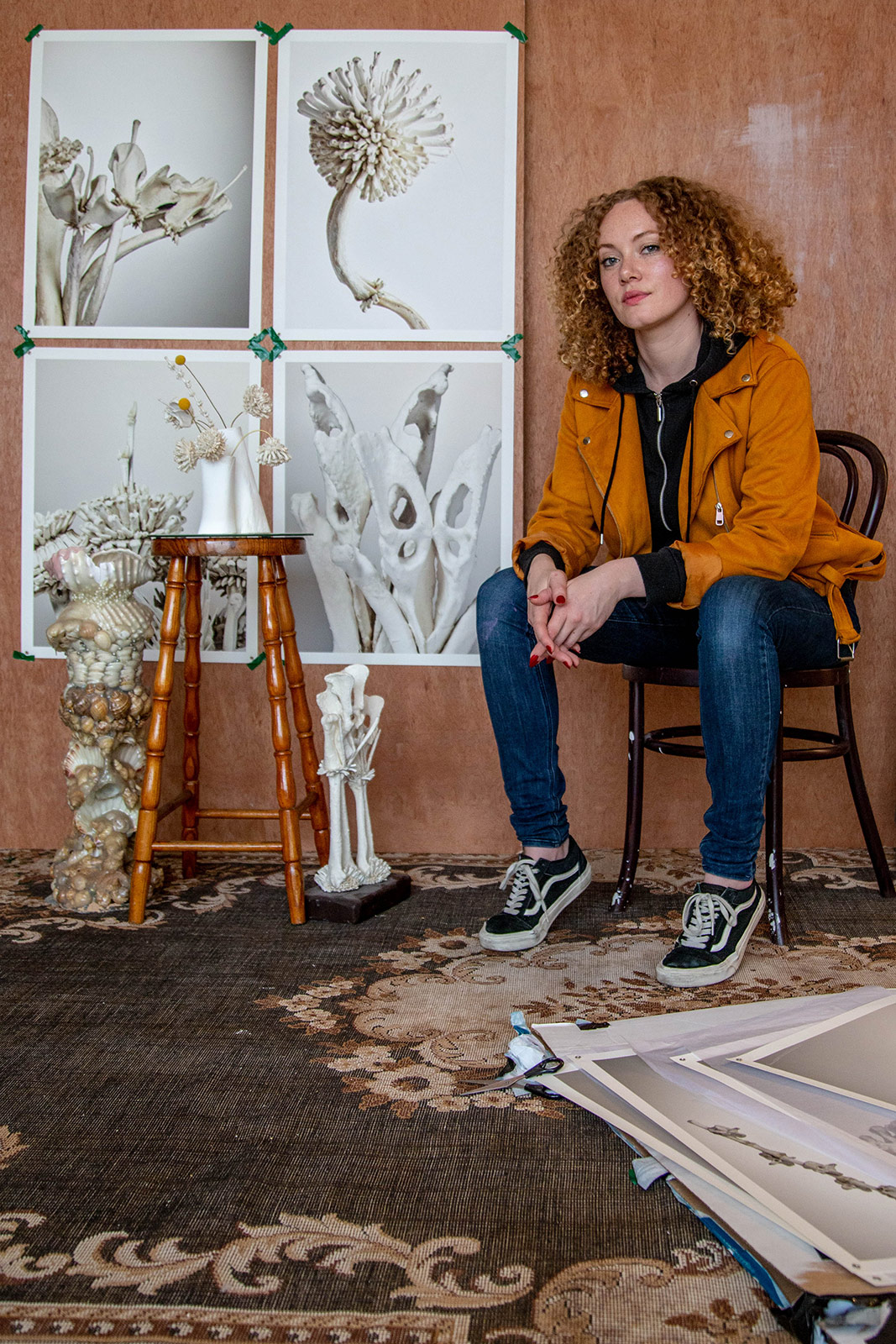 Currently working in the residence of the late Alexander McQueen’s Sarabande Foundation, artist Emma Witter shares aspects of her work with the British fashion designer: the theatricality, the darkness, the romanticism, and the love for memento mori. If McQueen’s trademark is a skull, Witter works with bones to create hauntingly beautiful flowers and vases. From September 18 to 22, her work is to be exhibited at Remember You Must Die, a solo show at the foundation in London. Today, we speak with her about material experimentation, the morals of using bones, and where is the limit between the macabre and the artistic.
You are currently based in London, part of the late Alexander McQueen’s Sarabande Foundation. Do you feel you have been influenced by the work of the designer?
It’s interesting at the studios because there’s not an overwhelming sense of McQueen ‘the brand’ or the aesthetic, it’s more about the culture cultivated between the residents and friends of the foundation. Lee, as we know, was given the opportunity to undergo the Saint Martins MA with financial support, and so wanted to give back by supporting young creatives in their studies and working studios. Fearlessness is something that our director, Trino Verkade, insists upon when selecting the residents. And there’s definitely a certain sense of determined outsider spirit that we all share there.
Were you an admirer of him? Or did someone else inspire your current work?
Absolutely. The darkness, romanticism and theatre of the shows completely appealed to me. My current work has been inspired though by many different artist and makers. I was completely taken when I saw Katrin Sprangers’ Aquatopia series, objects created as futuristic and reimagined drinking vessels in water and copper. She kindly spent time with me last month teaching me the basics of copper electro-forming, which has fed into elements in my show. I’m obsessed with the organic materials that artists like Katie McQuire and Susie MacMurray use in their sculptural work, and in contrast the complete synthetic-ness of photographer Vincent Fournier’s series Flesh Flowers.
You also share similar interests with Alexander McQueen, those being in history and materials, and also, in the macabre aspect of your work – your latest series features bones, and one of his trademarks were skulls. Do you feel this is implemented in your work?
Yes, memento mori is a recurring theme at McQueen and an aesthetic really of interest to me. I signed up to a fantastic art history and theory course in the winter at the Royal Academy called The Vogue of Vanitas and Mortality – we had ten different artists/art world experts come for discussions on memento mori and vanitas. One week, we had Claire Wilcox, who was the curator of Savage Beauty, come to dissect the work of McQueen, his oscillation between life and death, happiness and sadness, good and evil. We spoke about skulls in particular and how the presence of skulls in popular culture has softened its impact as a symbol. Like Warhol’s repeated pop prints of skulls and the reoccurring skull motif in many of Basquiat’s paintings, it’s the repetition that makes it much more palatable. The most obvious example of this being in the huge sales of the McQueen skull scarf, which appeals to all demographics!
This conversation inspired me as I have always avoided using skulls in my work as they are already so heavily loaded with symbolism. My challenge is to always promote the lightness and beauty of bones and try to reassess the macabre association we have with them. But now, I’m working with skulls for the first time, using the idea of repetition, creating a series of wall-based sculptures made up of half skulls entwined with my little bone flowers that are in a long repeated pattern. 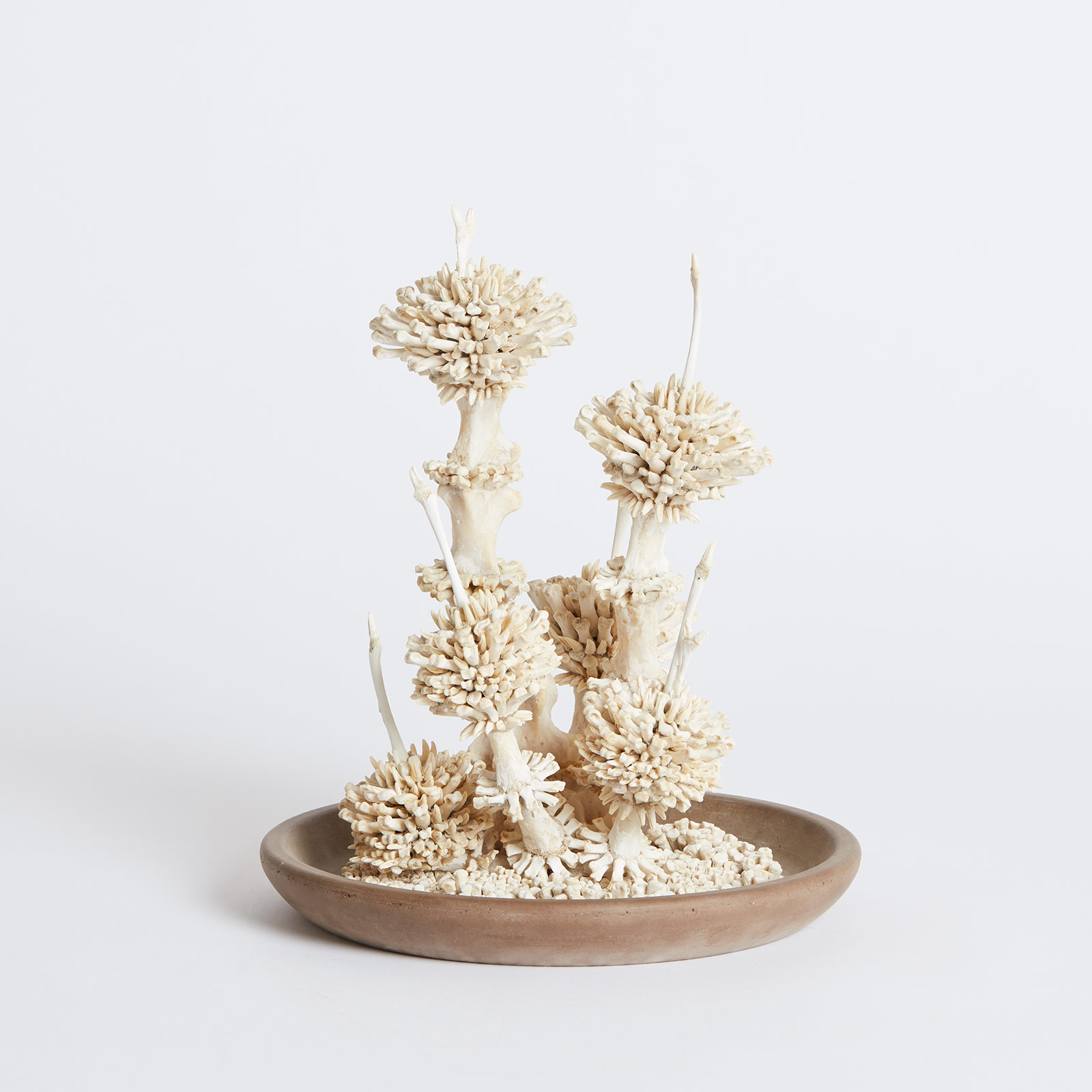 You define yourself as a set designer and prop stylist. What first sparked your interest in sculpture?
I always enjoyed making things and being hands-on. At Saint Martins, I studied Performance Design and Practice and experimented in scenography, costume and prop making. I loved working with typical materials but found that I was frustrated in creating things for performance as their existence was so transient. I wanted to create a lasting object or something that was beautifully recorded. Transience in my materials themselves is something very special to me, food being something I am forever inspired by and love to use sculpturally.
I love collaborating with photographers, and I have recently created a series of staged still life shots with my dear friend Ade Okelarin (Asiko) on a series of floral settings created out of food. Bountiful bouquets of flowers made painstakingly out of crisps and sweets, and moody ‘paintings’ using condiments like ketchup, mustard, and mayonnaise. I’ve taught myself some very weird and not useful skills!
Guide us through a normal day in your studio. How does your creative process start? What does it take for you to create a sculpture?
I usually work across a number of sculptures at the same time as the process of prepping the bones (collecting, boiling, bleaching, drying and organising) has lots of pauses in between. I use a painter’s acrylic on top of my formations to seal them, but that means I have to wait for each layer to dry – so I work across a few works at a time. I experiment a lot and make a lot of mistakes. It’s all trial and error when you use a material that is actually still very much alive and temperamental!
I actually have a very bad attention span, but when I get into the flow of making – I think because the making is so small and intricate and repetitive –, you have to relax and get immersed. I can go for hours and be in a complete sense of calm. It’s a very therapeutic and ritualistic process. I’m lucky to share a studio at Sarabande with my old friend, Jonah Pontzer, who is a very talented painter. Both of us have an extremely organised kit and each uses painstaking techniques. We are each other’s second set of eyes and ears and don't cut each other any slack. We’re chalk and cheese in our work but it’s a perfect combination.
As your work is made of animal bones, have you ever received backlash from the public?
Not hugely, no. I’ve seen the odd dismissive comment on Instagram like ‘not vegan friendly’, but I’m reclaiming waste from the food industry and giving it a second life, actually paying huge respect the whole of the animal. To my mind, it’s very friendly. Oh, and I did have a woman once pick up my business card at an art fair, and then when she realised that it was real bones, she made a point of coming to put my card back. I noticed that she was wearing both fur and leather, which is absolutely fine by me, but just made me laugh. 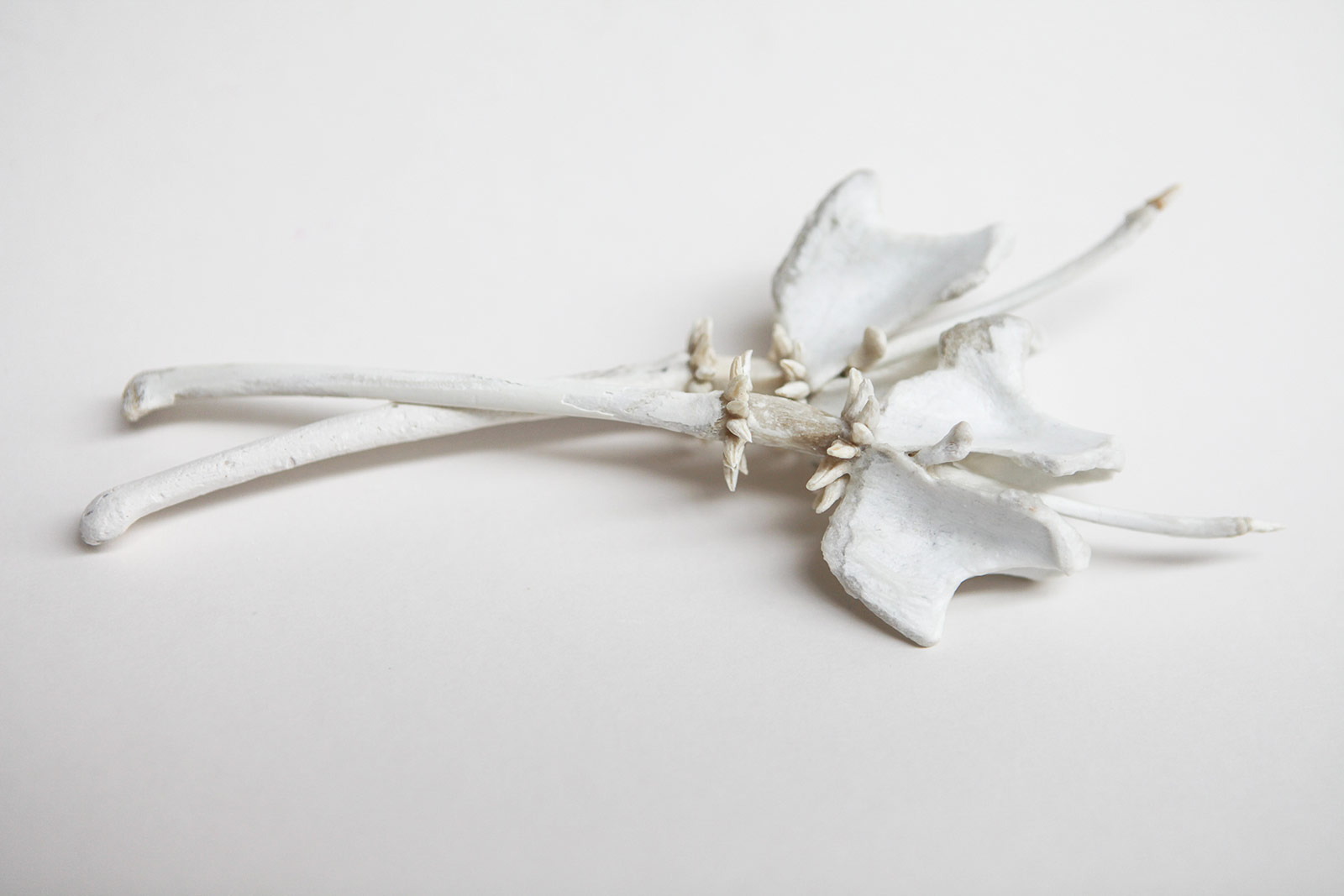 “Both hauntingly beautiful and surprisingly gentle” are words that have been used to summarise your work, do you feel they recapitulate what you are trying to convey with the use of bones?
Yes! This is totally my vibe. I want the works to feel quite powerfully beautiful, but at the same time, for the material to feel very normalised. I would love them to create a sense of stillness and calm.
The bones are then sculptured into something beautiful, becoming a flower. Do you resonate with the idea of reincarnation? Are you a spiritual person?
I wouldn’t describe myself as a spiritual person necessarily, but I am fascinated with the diversity of death and burial rituals across the world. I love the idea of ceremony, ritual and special artefacts. In the floral motifs, I do like the balance of representation of life and death, fragility and strength.
Remember You Must Die is the name of your upcoming solo show at the Sarabande Foundation in London, opening on September 18. Have you used this name due to the use of bones – like the traditional memento mori art theme – or did you name it for another reason?
Yes, Remember You Must Die is one of the literal translations from the Latin phrase ‘memento mori’. I really liked the flow of the phrase, and it also resonated with me because of the fragile beauty I am trying to convey. We think of memento mori as a dark reminder of death, but essentially, it just means we only live once, we’re all going the same way in the end, so make the most of today. All the problems or riches we carry with us can’t be passed on. Memento mori is actually really about life, about what is truly beautiful and valuable. 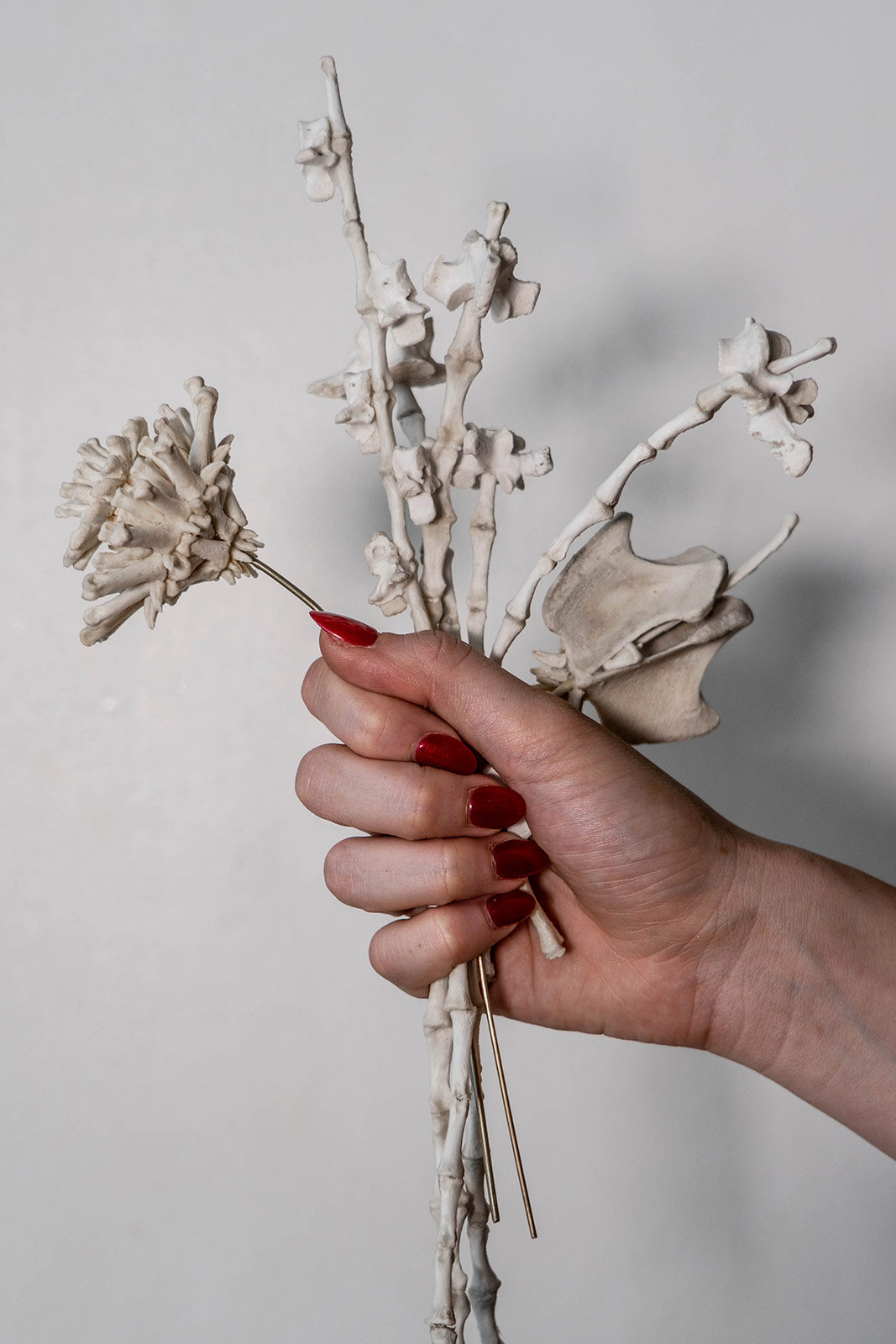 In the following years, do you hope to expand your creativity and branch out from solely creating flower sculptures?
Yes, definitely. I’m really interested in exploring the use of bone in different industrial/artistic materials. For example, extracting the oil, burning to use bone char, crushing them down into bone powder… I’m dying to learn about bone china, which is thirty per cent bone ash and creates an extremely strong and slightly translucent porcelain. I’d also love to scale up and design pieces that are a hybrid between sculpture and furniture.
In your next series of works, you are going to be adding copper elements to set the likeness between strength and high mineral values of the two materials. In the future, would you start using other types of material and carry on experimenting with new ones?
Yes, I love the parallels between bone and copper and think it’s a beautiful combination for some of the works. I definitely don’t want to be in a bone ‘box’ – I and am very interested in exploring other materials. I’d love to collaborate with scientists to really push material possibilities for my sculpture. For example, there’s a scientist in the United States who has invented an eco-friendly plastic by adding chemicals to waste bone meal. This material is then so strong that it can be used to make snowboards. I think inventive combinations of materials are really exciting.
Finally, what has been a goal that you’ve recently achieved? And a goal that you would love to achieve in the future?
A goal this year that I achieved was to branch out into making a hybrid piece that sits between sculpture and interior object. I’ve created a pair of Vases For Dead Flowers using model casting, 3D printing and copper electro-forming techniques. It felt really good to move into new processes. For the future, I think it’s about scaling up, really nailing a new technique and pushing myself to do something unexpected. 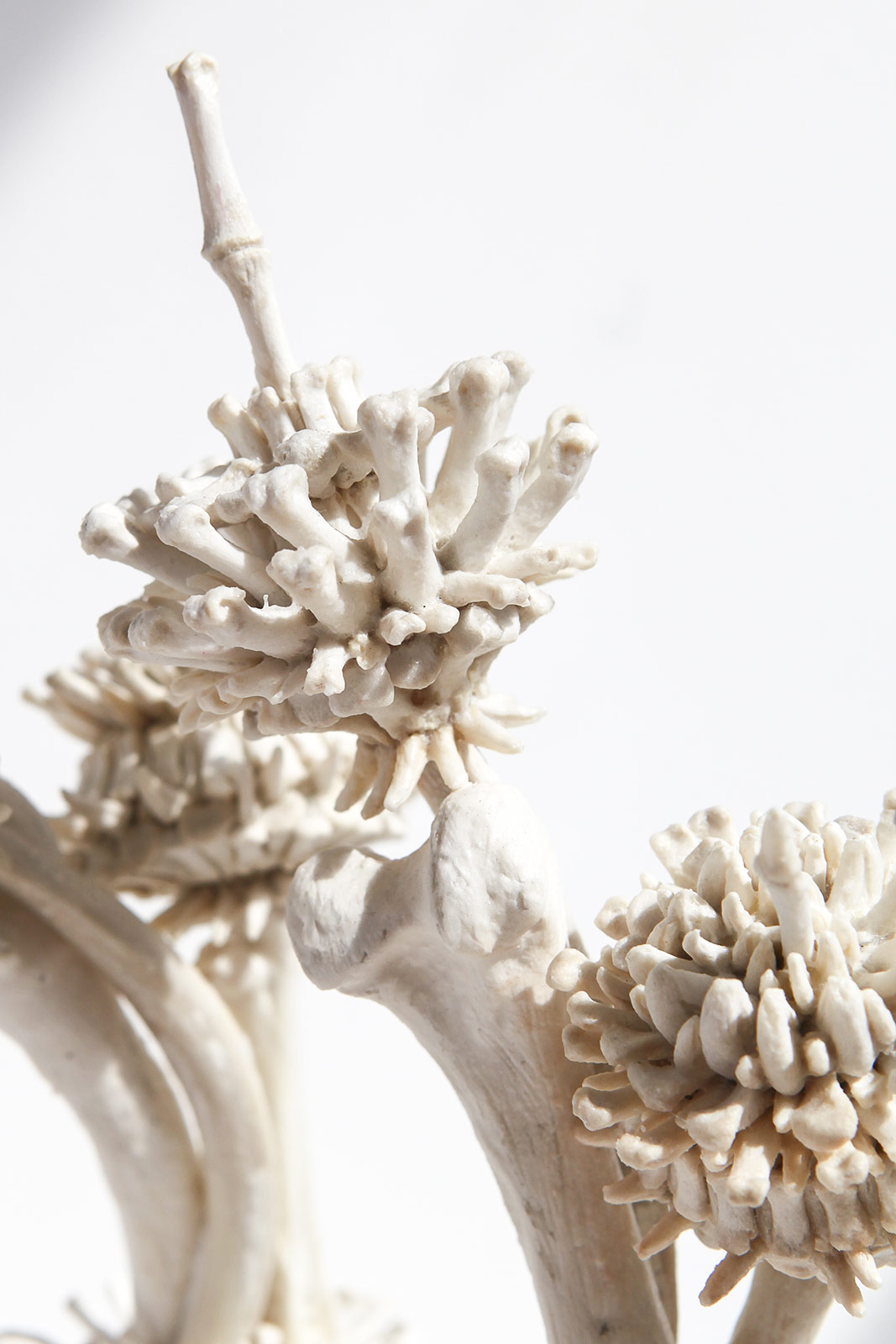 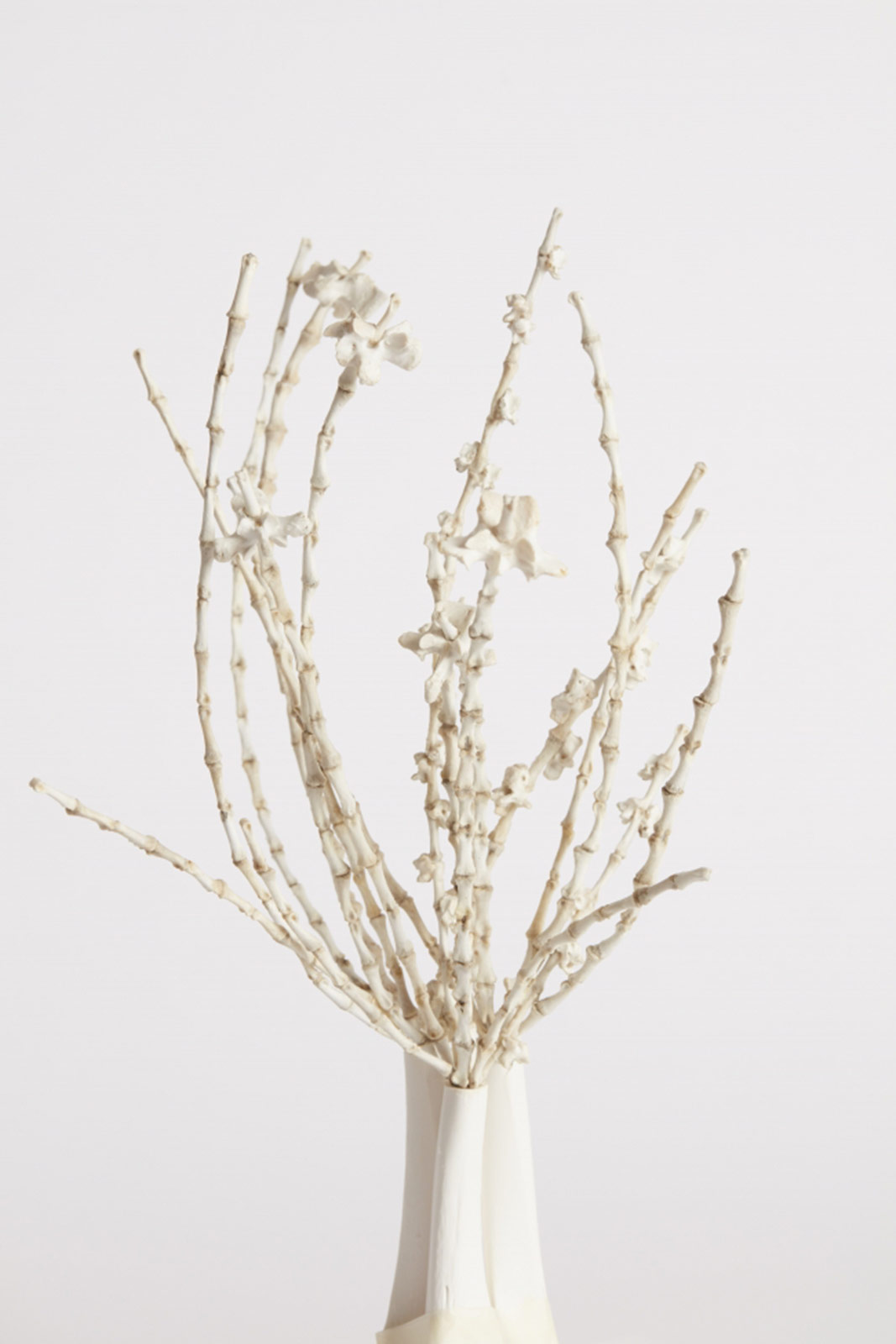 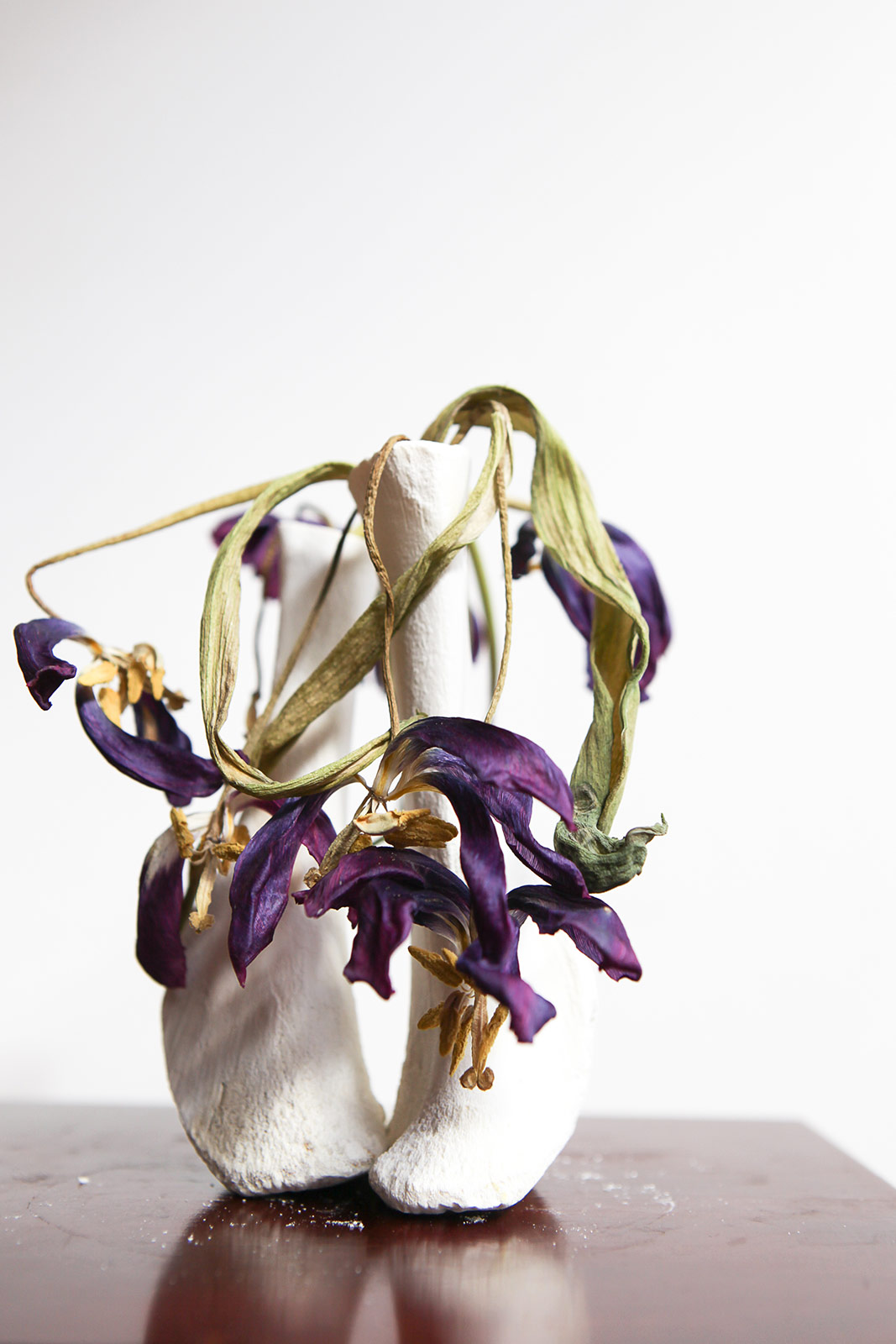 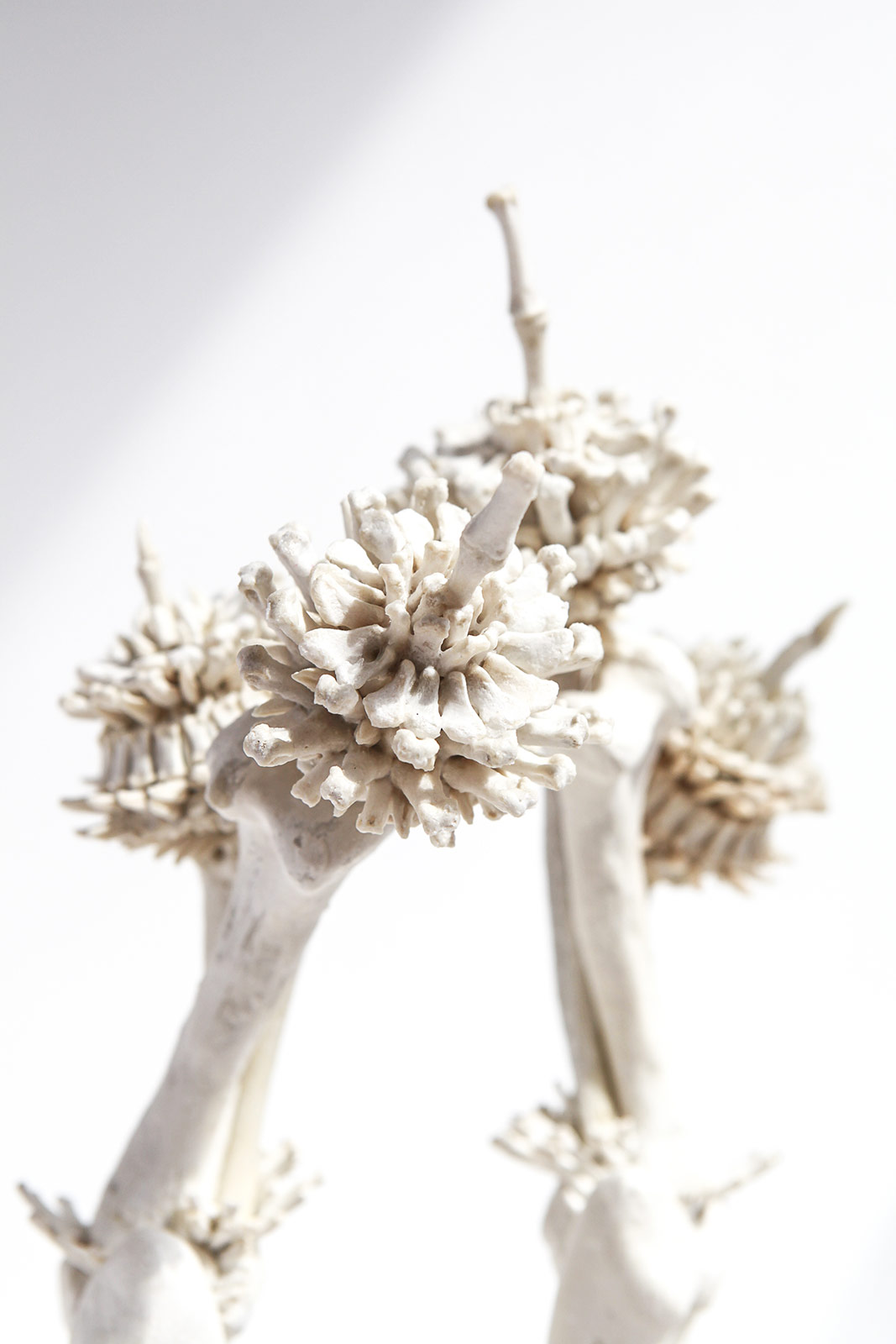 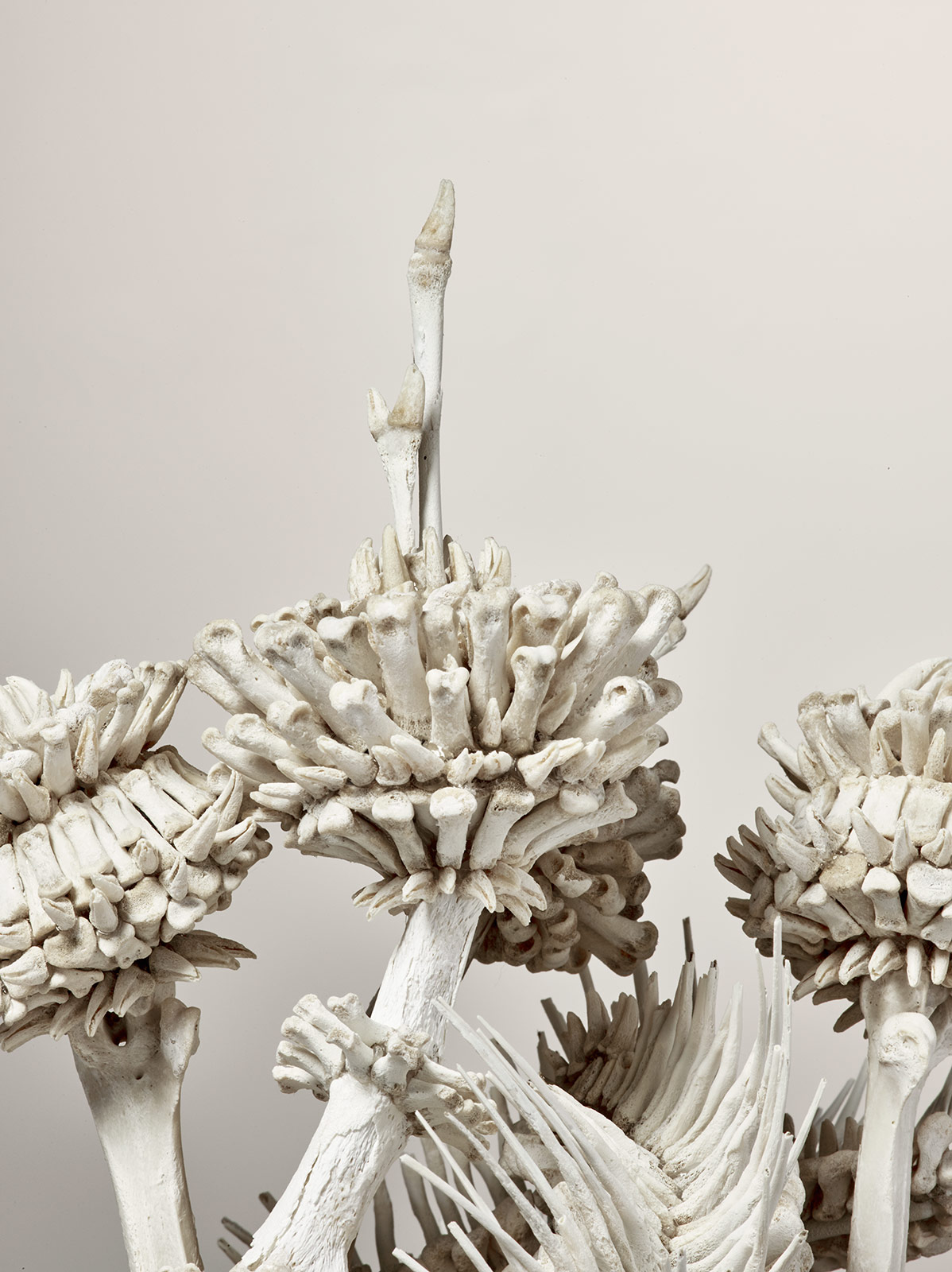 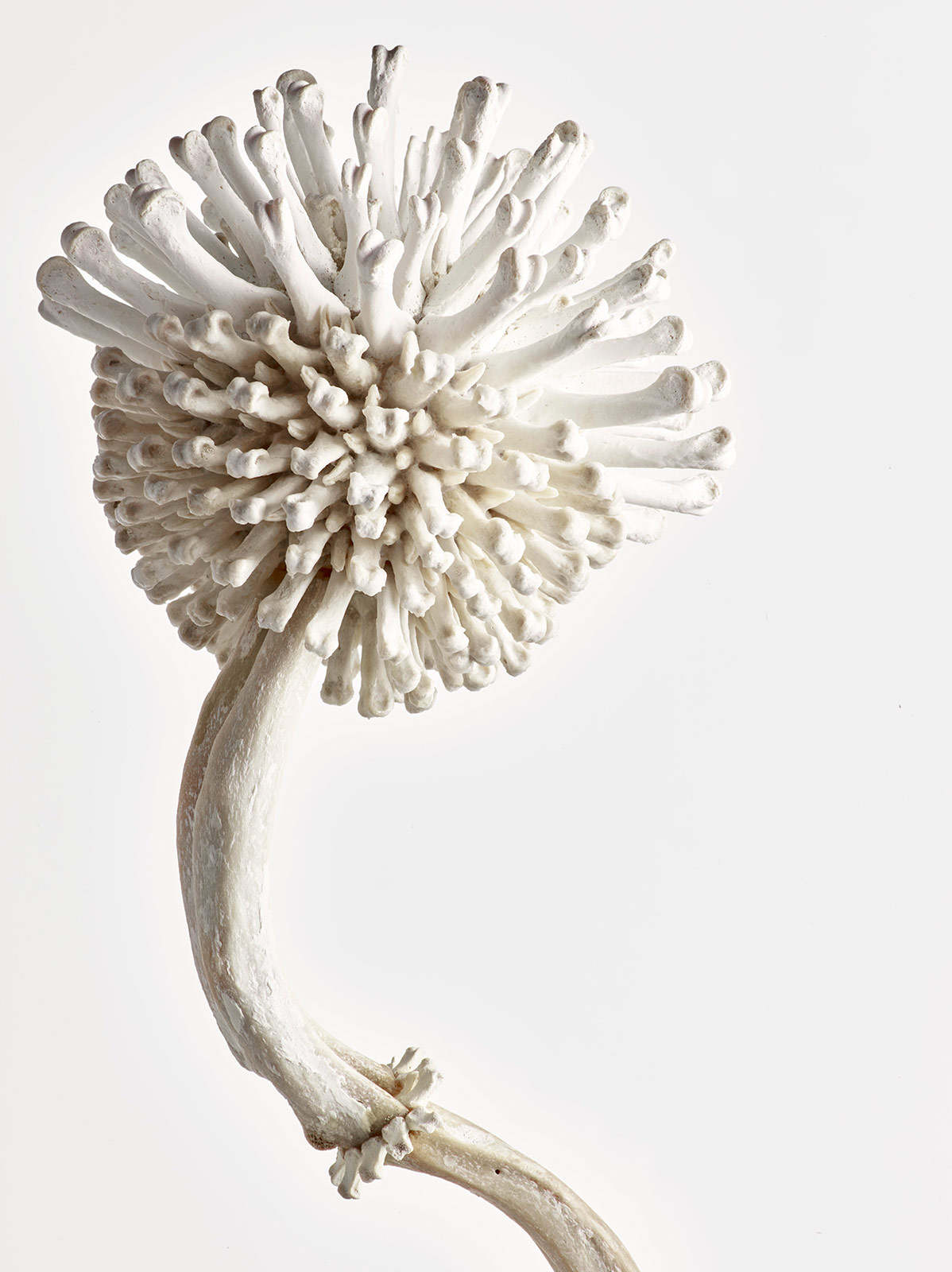