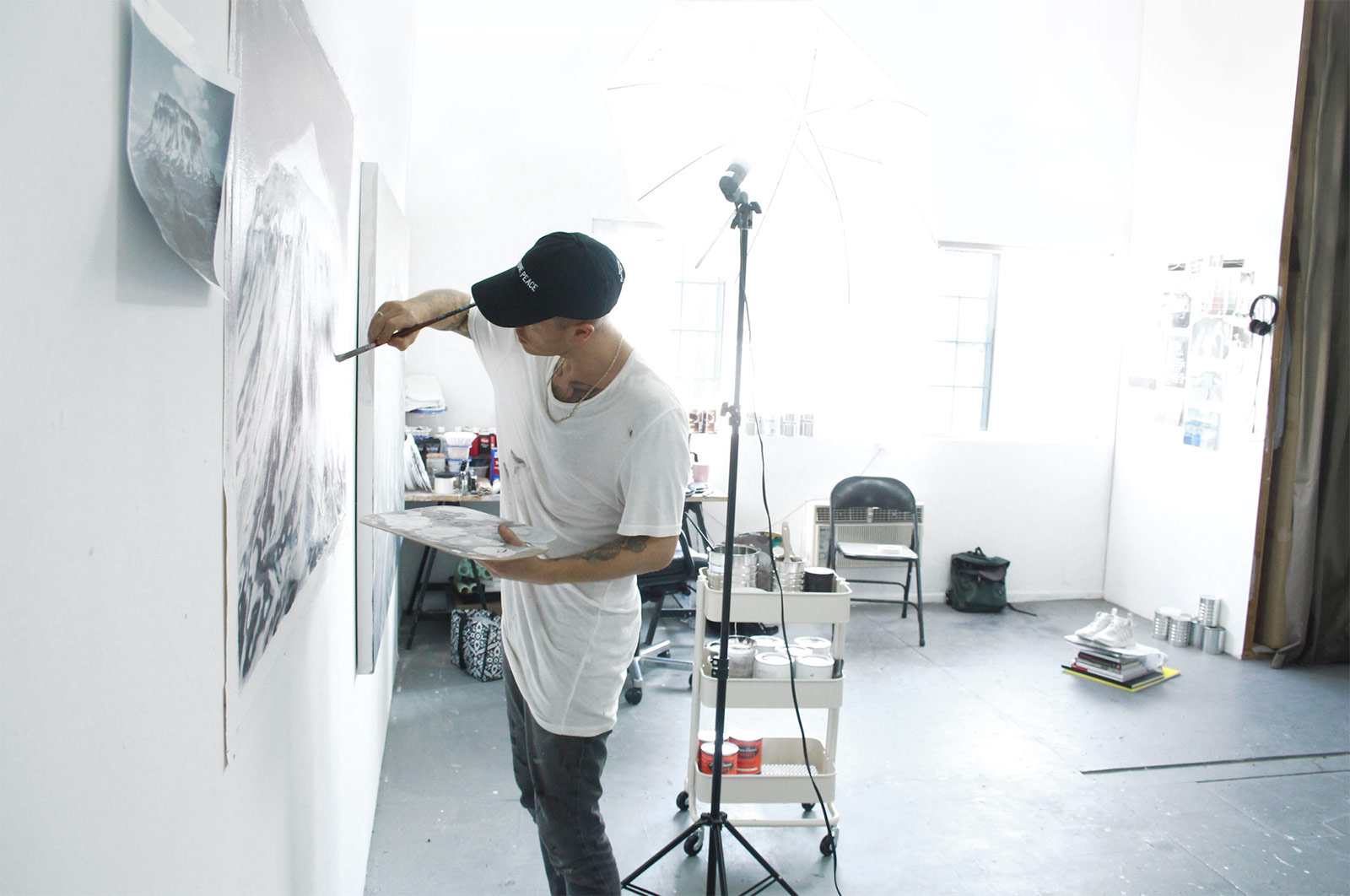 Born and raised in Iceland surrounded by paintings, it is not strange that Elli Egilsson developped a creative soul, almost without intending it. From child drawings to graffiti and typography, the painter has worked with all materials, ranging from ink and watercolour to finally ending up with oil painting to depict the landscapes from his homeland. Currently based in L.A., Egilsson has been sketching and painting for years the same Icelandic glacial volcano over and over again, Herðubreið, which he has never actually seen with his own multi-coloured eyes. He was in fact a professional painter his early years, but that is hard to notice when you gaze at his majestic pieces, with such delicate lines and colour palettes.
Tell me a bit about your childhood in Reykjavík.
I spent most of my time as a kid at my dad’s studio watching him paint. He taught me all the tricks and techniques when it comes to drawing and painting, and still does actually. Iceland is the most safe and secure environment you can be raised up in: no crimes, everyone’s pretty much related, everything’s imported – which makes it expensive as fuck to live there, but other than that it’s the most beautiful country in the world. Every time I go back to visit, the landscape and nature just blows my mind. Iceland in general is very isolated so we stay busy creating and mating!
When did you decide that art was your path? Can you talk about your formative years as an artist?
It was never a decision, it came naturally, it’s in my blood. I guess I went from naïve kid’s drawings to making comics to graffiti as a teenager back in the early ‘90s. Then I elevated my graffiti lettering to typography, and went from graphics to detailed illustrations and logo design, which I’m probably most known for. It wasn’t until I moved to London that I started painting on a more serious note. I had my first studio there, so I started experimenting with mixing mediums like water-colours and ink on some beautiful handmade cotton fibre paper, which turned into my first solo exhibition, in Atlanta. Shortly after that I got into acrylics, so around 2012 is where I took the big jump from paper to canvas – what a trip! Then a couple years later I moved up to what my father had predicted I would eventually fall in love with, oil paint. And, wow, what a difference! There’s no turning back now.
You lived in London for a few years. How did the city contribute to your personal and artistic evolution?
As grey and grimy the city can be, I can’t say it made me evolve me personally into anything greater than I already was, but artistically it made a distinction, for sure. The city offers so many amazing museums and galleries and just culture in general that influence you in so many ways. I didn’t really connect a lot with the British people –don’t get me wrong, the British are nice and I have British friends–, but I just never related to their pubs, food, music, etc. I guess the main thing that made me connect with other UK creatives was their drive and hunger for more and bigger things. I met and got friends so insanely talented, driven artists from all over the world and shared studios with minds that showed up everyday to do one thing: create. It’s THE mecca for anyone willing to learn and start on something new. 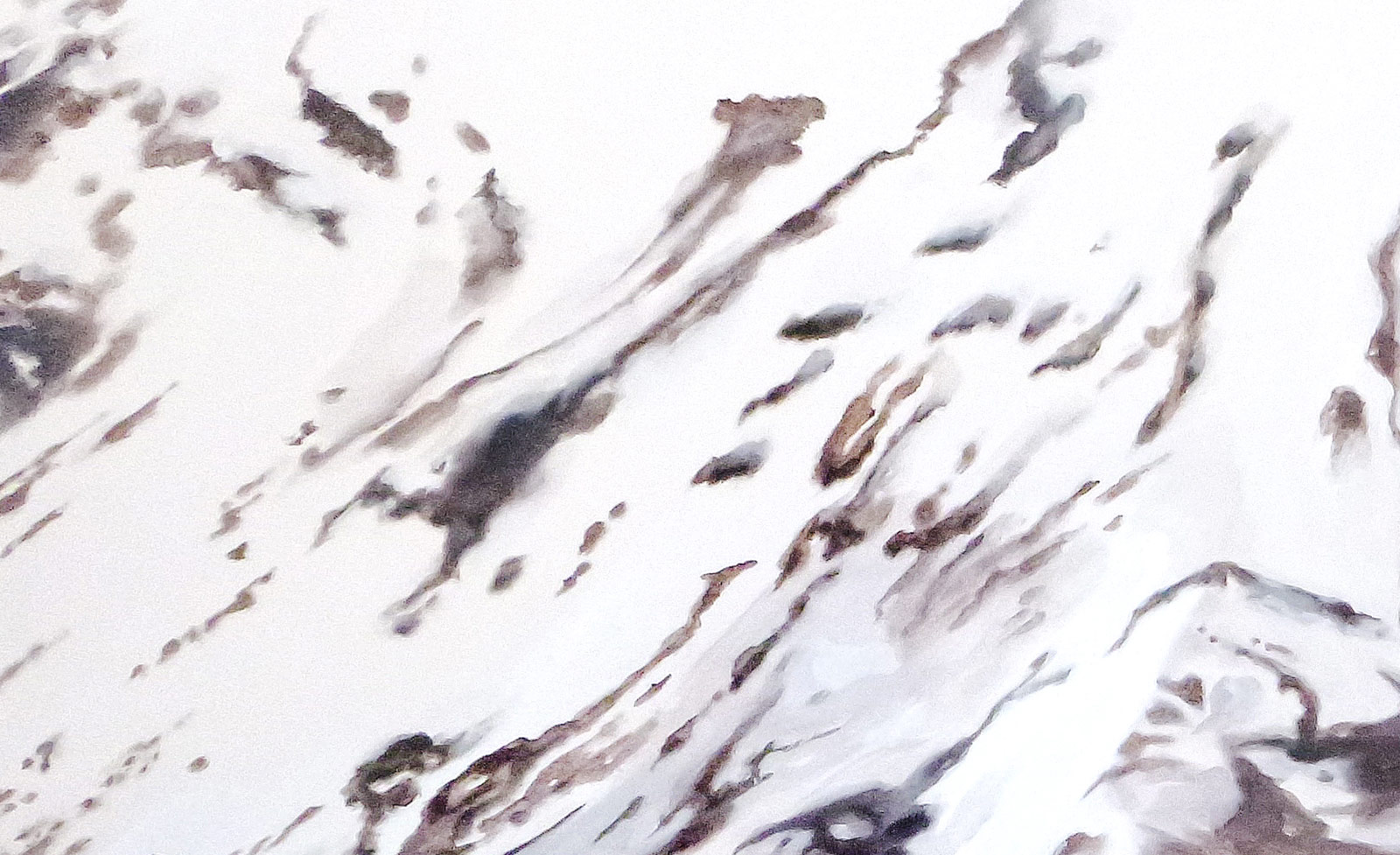 And what about your influences and sources of inspiration? Do you think that inspiration comes suddenly anywhere, or are you of the view that it comes while working?
I can’t speak for anybody else, but my source of inspiration is just being happy and staying positive. Of course discovering and seeing beautiful objects and things can influence your actions and creation, it could be anything: music, art, films, reading, animals, textures, etc. But for me it’s mainly being happy what motivates me to push further and head to the studio. If you don’t want me to paint, just get me in a bad mood.
How would you describe your current visual language?
Well, since the only thing I pretty much do these days is painting in my studio here in L.A., I’d say that is my only language at the moment. My paintings are not really a form of expression of myself or anything like that, I just paint because I’m good at it and I love it. Even though I’m still new to this, I have a feeling that I’m slowly turning into a pretty good landscape artist. And even though constant ideas flow through my head on a daily basis, I’m currently just sticking to a concept that I’ve been working on and developing for years, that, for me, is the true challenge.
If I’m not wrong, that concept is painting the same under glacial volcano, Herðubreið, inspired by Stefán 'Stórval' Jónsson, the Icelandic artist who painted this peculiar mountain throughout his life… How did the idea arise?
I don’t really remember what it was that made me stick with Herðubreið for the past years, sketching and painting it over and over again. Maybe it was me missing the Icelandic nature and landscape when I moved to London. I remember my dad gave me a photo he took of some mountains –not Herðubreið– the day I moved to London, and he wrote on the back of it, in Icelandic, “As a reminder of where you’re from.”
It could also be that I was raised up in a home with Stórval’s paintings covering our walls, but not many people know that he was a very close friend of both my dad’s and my mom’s families. He visited us at home quite a lot, drank his coffee and told us stories from his childhood – he was hilarious and he truly was part of the family. Stefán’s father and my grandfather were best friends, Stefán and my great grandmother were best buddies too and of course my dad and him were very close. They traded paintings and my dad even made a documentary about him back in 1994 and filmed him painting and preparing what would be his last exhibition. He passed away just before my dad finished the documentary, and I was one of the few people who attended his funeral. I was 13 years old, so yeah, this project is very personal – it’s not just me painting a mountain, it’s a lot deeper and kind of hard to explain really what this means to me.
I guess my intention is just to paint an Icelandic scenery by memory. I want to paint how I remember the landscape being, and not exactly how it is, because I have never seen Herðubreið with my own eyes. 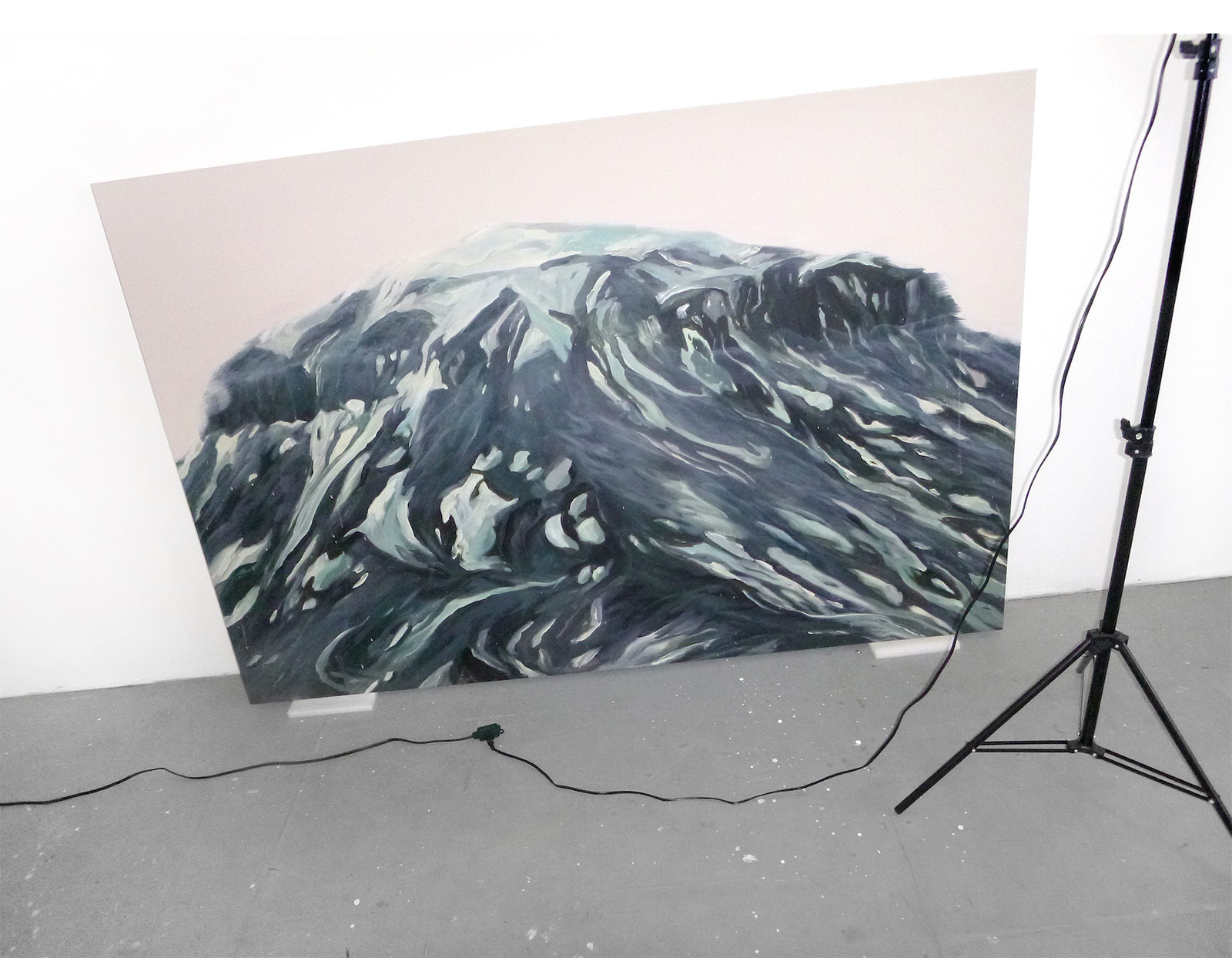 And having never seen it with your own eyes, are you planning to visit it after painting it for such a long time?
That’s a good question. I’ve thought about it, and ever since I started sketching it, I’ve had this idea of making an exhibition out of it, and then after the opening just drive straight to go see it, and stare at it and observe all the errors that I made in the paintings.
At first I thought it would be a brilliant idea, but not that long ago I explained this to a good friend of mine, Dr. Sigurdur Arni, and he said, “Don’t. Why would there be errors in your paintings if you’re painting and making this your own Herðubreið?” And that really hit me... Maybe I shouldn’t go see it! But I can’t avoid it forever. We’ll see.
Don't you sometimes feel collapsed and have the impulse to paint something else? Or are you 100% focused and immersed in this project?
My fingers itch sometimes to go paint some tits or something like that (laughs). That’s something I’m apparently good at too, but for now I’m focused and dedicated to this beautiful tuya top.
You are currently based in Los Angeles, but you keep painting your homeland. Did L.A. influenced your work in some way, as London?
I struggled a little bit at first, since I was painting in my kitchen at home. I felt I needed a bigger space –my paintings are usually around 5-7ft tall–, somewhere I can leave everything as it is and come back whenever I want to and it’s exactly the way I left it. So I started looking for a studio, and this one caught my eye. It’s in the middle of South Central, Crenshaw. I believe it has taken my paintings to a whole different level, and it’s because the location! Crenshaw couldn’t be anymore perfect for me. It’s the complete opposite from the beautiful landscape that I’m painting, and like I said earlier, Iceland is probably the safest country in the world and then you have this place, Crenshaw, which is not a safe ground at all. I hear gunshots every now and then and it’s rough out there, but that’s somehow inspirational for me! I have my local liquor store on the corner, where I pick up my Modelo through a triple layered plexiglass, and the people I bump heads with are either gang members or the ladies of the night. It’s somehow fascinating. 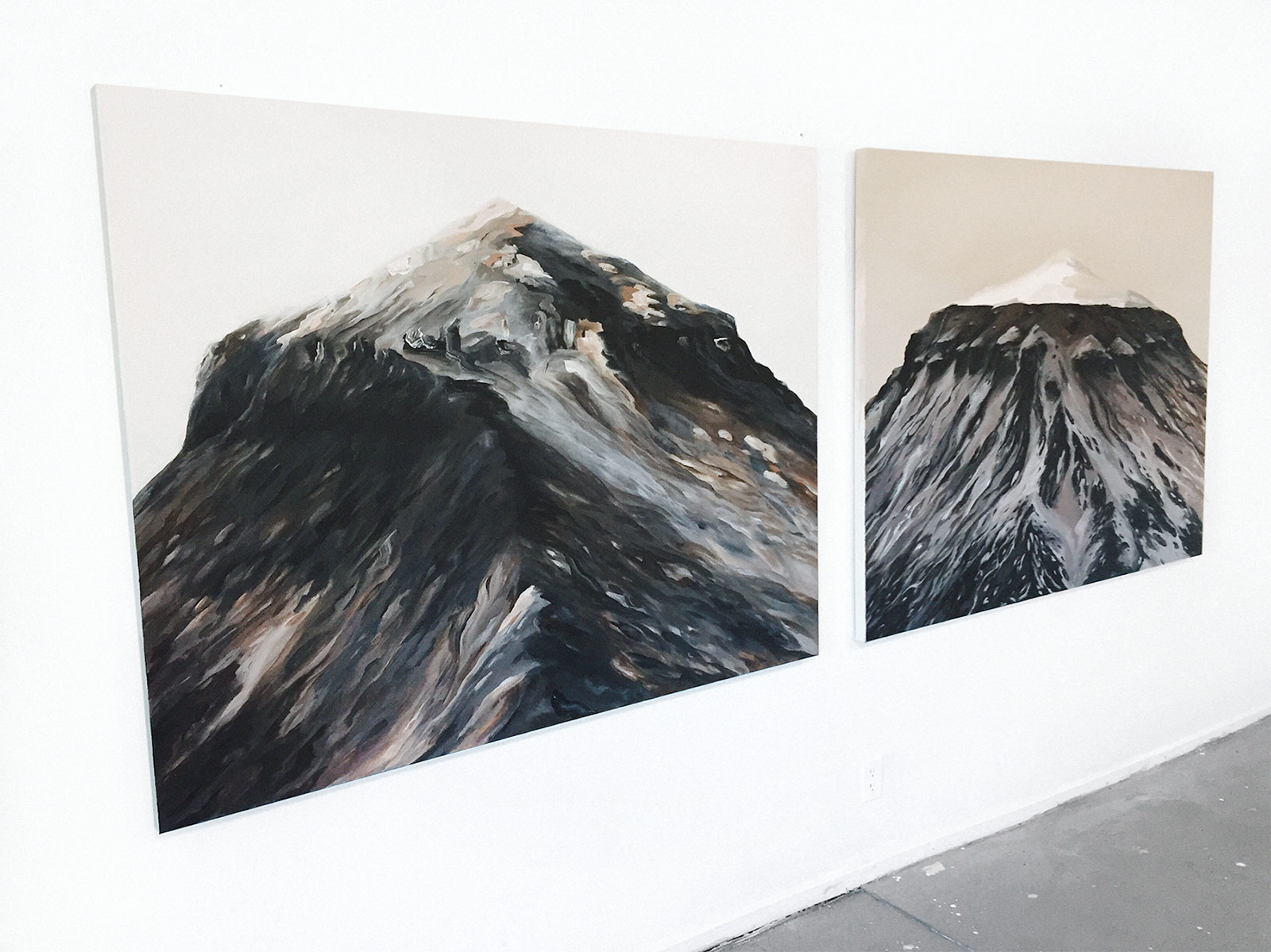 Which things do you enjoy doing out of art? What keeps your mind away from work?
I exercise as much as possible, me and my wife go spinning and hiking all the time. We have a beautiful home here in Hollywood with a nice view over the city, and I like to smoke premium cigars by our pool. It’s relaxing, it doesn’t really keep my mind away from work but somehow it’s my method of meditating. L.A. is a big city and has a lot of great things to offer, so I just try to enjoy it as much as possible.
When do you expect to have the Herðubreið exhibition ready? Do you already have future projects in your mind?
I’m going to say… beginning of 2017! And yes, I’m already planning on a few other projects that I’m also really excited about, I’ve got a good vibe for the year 2017.
I would like you to finish asking you about a band and an artist you have discovered recently.
I have to name two new bands actually, Kíruma and Blissful. As far as an artist goes, I can’t just name a single person, but I would definitely go check out these artists if I were you: Eddie Martinez, Samuel Bassett, Jaybo Monk, Katherine Bernhardt, Trush Holmes, Mafia Tabak and the great Donna Huanca, to name a few. 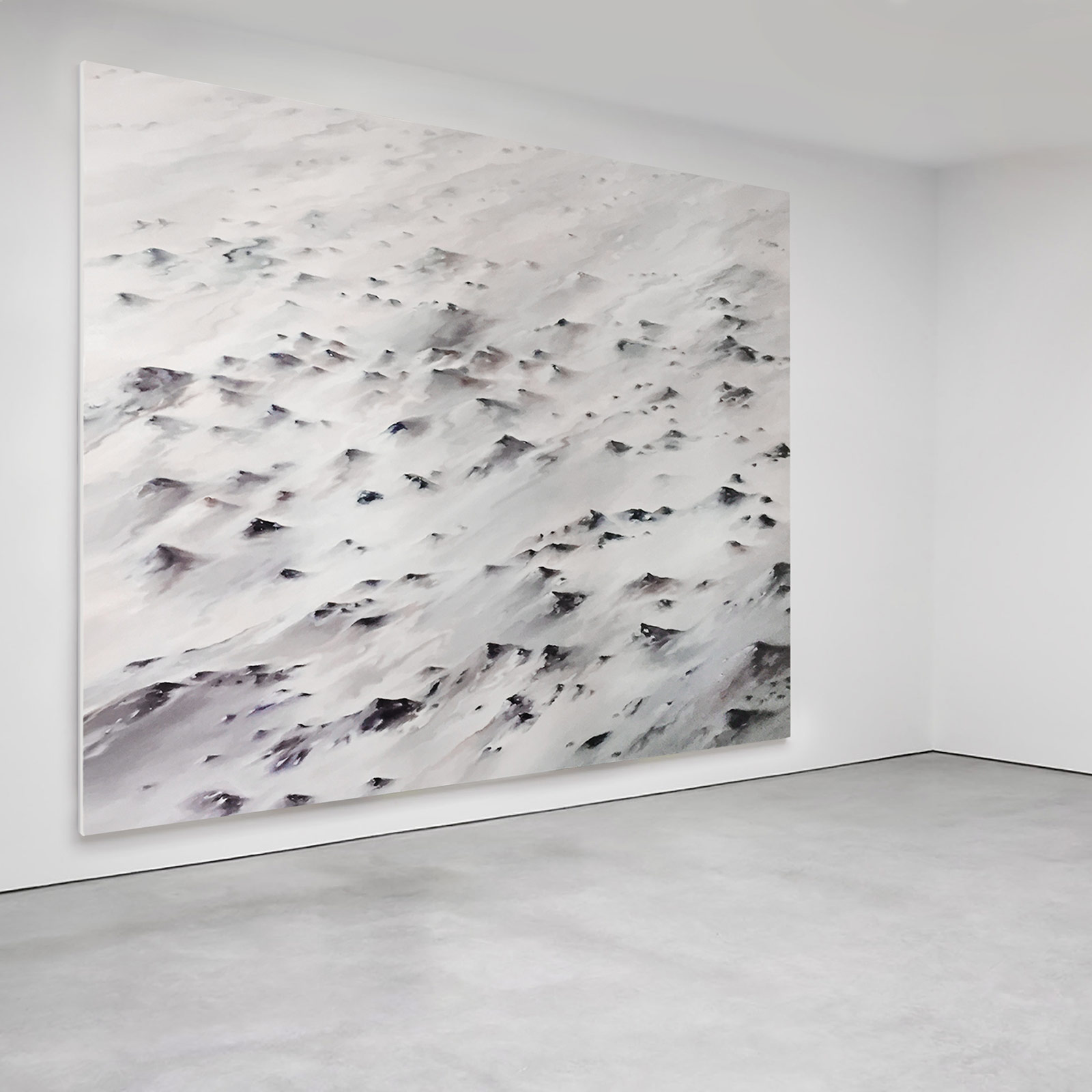