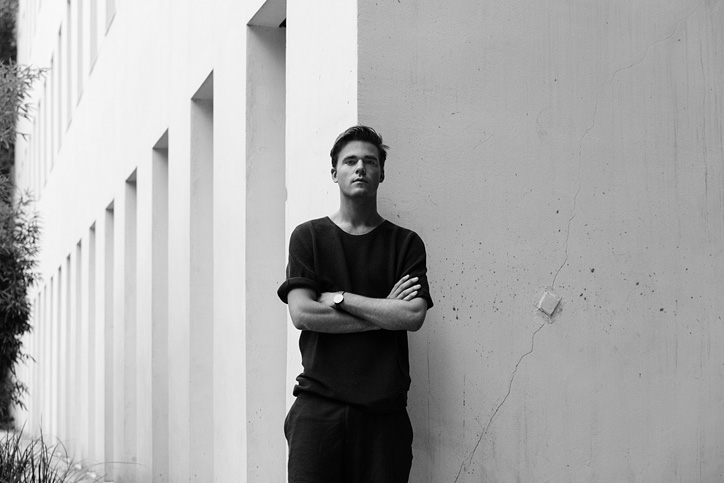 He may be just twenty three years old, but Edward Cumming –or Eddie, as his friends call him– can already claim to have an award to back his talent. His collection "Colour Me In" has been awarded as the best ModaFad collection of the season. Born in Australia, based in Barcelona, he just graduated from IED. Eddie introduces a collection that dares to play with two-dimensionality and three-dimensionality,materializing his view on both concepts in unisex and oversized garments. His work is also a presentation of the textile collage concept. We talked to Eddie to know more about his impressions after the experience of winning this award, and also to discover more about this approaches to fashion, the meanings behind "Colour Me" and his future plans.

First, congrats on your recent MODAFAD award. Can you give me a little background about yourself? Where are you from?

Thank you! Sure. My name is Eddie, I'm twenty three years old, I was born in Australia and grew up in Sydney, a few clicks North of the city, on the “Northern Beaches”. I started my fashion degree at The University of Technology in Sydney and completed the first year there before life took a real twist and suddenly I ended up in Barcelona starting the BA again and learning a second language. It's all still a bit of a blur, to tell you the truth, but here we are on the other side!

A statement about your experience in the prize, thus far. So what did winning really mean to you?

Well, the prize was such a quick thing. All 23 designers barely spent a whole day together. It was intense, with fittings and moving racks around the city. It was all over before any of us really knew what was going on. I feel lucky and honoured, everyone brought something unique and fresh to the table, and to be considered amongst that level of talent is really humbling. Also making anything and people responding to it in a positive way will always make a designer chuffed no matter what discipline they practice. I think we are all pretty vulnerable to insecurities at this stage of our careers (post university).

When and why did you start designing?

I started when I was fifteen years old. We took a whole range of elective subjects in my high school and I had taken Agriculture for a year, so I had spent most of my time playing with chickens and cows and trying to grow a watermelon (that never really worked out). The following year, in Senior High School, I decided it was time for a change. Design and Technology (textiles) was one of the only subjects with space for late admissions, and I always enjoyed looking at, and wearing clothes so I thought ‘why not try making them?’ I believe this logic was also applied in regards to the watermelon.

Tell me about the collection you're working on now.

Right now I'm not working on anything. After a very intense year at uni I'm taking some weeks to pack up my house, sort out a visa and enjoy the summer! The expectation is that I'll present a collection at 080 in January 2016. This may either be a continuation on my graduate work or something completely new. You'll have to wait and see!

What was your mindset like when you were creating your designs?

I tend to hang on to a word or song while churning out designs, so as to keep myself focused and on task. I think at the beginning I was really nervous about the nature of a graduate collection. It's really daunting and definitive in a way (even though it’s really not), so my focus was split in many directions. After a while, though, I got over that and the word ‘energy’ and any song mixed by Kaytranada became my anchor points, and I was set on creating something fun, well edited and concise.

Your designs look like there are some futuristic and colourful elements to it. How do you see this?

Modernity is definitely where my focus lays in this collection. However I don't see so much futurism. At least I didn't intend for it, but it's great if you see it that way! Colour was definitely the most important element in this work as the whole concept stemmed from the idea of colour coding humans inside correctional facilities. I did a lot of research into psychological association with colour, specifically in uniforms. As a body of work, trying to nail the balance of white and explosive tones of orange, blue and pink was a challenge.

Do you see yourself taking this view with you in your career? Has it shaped your style or the way that you want to design in the future?

I’d like to think that I'll always be designing optimistic collections. However, design for me (and I think for most people) is an ongoing process. I definitely don't want to shut myself off from being inspired by different attitudes and approaches to fashion. Gathering work and editing it into a cohesive, well thought out package is my real passion. If I keep doing that reasonably well I think I'll be happy designing anything.

Tell me about some designers that you admire. Who is on your radar right now?

The list is endless! Kris Van Assche and his eponymous label have always been a massive inspiration for me since I became interested in Fashion. His sensibility for colour and tightly edited collections are something to aspire to. It's his work even across his position at Dior that you can see influencing shapes and cuts in menswear all over the place, it's a quiet power that is enviable. I have to say it's disappointing he is taking a break from his own label, but I'm sure it's so that he can come back even stronger in the future. Secondly Simon Porte Jacquemus is a designer I admire a lot. He really nails the effortlessly cool, addictive aesthetic thing for women. But what is most interesting I feel is his ascension. Seeing his work from a few years back there is such a progression. It's as though he's completing a degree in fashion design but instead of presenting to tutors, he's presenting to the world. Everything is very honest and uncontrived which is tough for someone as young as him. I think he takes epic risks but he has such a loyal following that he's granted the freedom to do that with little backlash.

We are going through a very exciting time for menswear right now. As someone who has just graduated from college, is the menswear environment intimidating? Is it welcoming? How do you see yourself in that world?

The menswear environment is so exciting. I think I am secretly intimidated by it which is why I haven't actually designed 100% menswear, I always believed I would, but I seem to always keep women involved, perhaps as a safety blanket because there is a lot of expectation and pressure on new menswear designers. The industry is so hungry for it that I think it's a little scary to present ideas to that forum. But also so great. Welcoming –I would think so. Fashion is sort of a global conversation and from where I am I see designers in the emerging stages of their careers really supporting each other and pushing a new voice forward on men's clothing. I see myself contributing to that world but not exclusive to it.

For the imagery of this collection you worked really close with Javier Castán and Djallil Maameri. Castán was in charge of photography and Maameri worked with video. Both of them are emerging talents in their own niches. How was the experience of working with them? How important is it for you to work with people who are looking for their own future in the fashion world? Why did you choose them?

The team was incredible. Djallil has been a long time collaborator and friend of mine, and the amazing thing about working on that kind of level and closeness with someone is that communication is so easy –he knows what I want yet knows exactly how to insert his own genius to bring the best out of any idea. What I respect most about him is that his work is not originally rooted in fashion. I think working on fashion film came about circumstantially for Djallil, his personal projects are much more human and artistically based. This for me brings a different sensibility to a fashion video shoot. He works hard to get the best out of the clothes yet insists on the images having a narrative. It's a talent that I feel can't be learnt, his instincts are spot on and he is meticulous, so I couldn't have imagined working with anyone else.
Javier is a new friend, I’d seen his work published in various places and knew that his aesthetic was going to elevate the work I was creating. Creating clothing and ideas is one thing but you need to entice viewers with the whole package. Javier was the final ingredient for this. His work is so advanced and developed in its own right. Working exclusively on analog was probably the most appealing asset of his for me. I felt confident that he had a vision and knew what he was doing. While I can try to control things, in the analog format the middle man is almost completely cut out –it's just him and his lens and I learnt a lot from letting a lot of that stress go and trusting him. In the same way I'm honoured that he trusted me, we are at very different stages of our careers as artists and he took a chance working with a young graduate which I'm very grateful for. While he works a lot in fashion, in similar way to Djallil, his work is not exclusive to that world. He captures stories and moments through his photography, it's an art form so indicative of youth culture, this essence cannot be learnt. So I guess for me what’s more important than ambitions for a future in the fashion world is more a very singular and personal voice than a medium. When you bring creative minds like that together such as Djallil and Javier, the results are explosive and I feel this was the most rewarding part of the project. 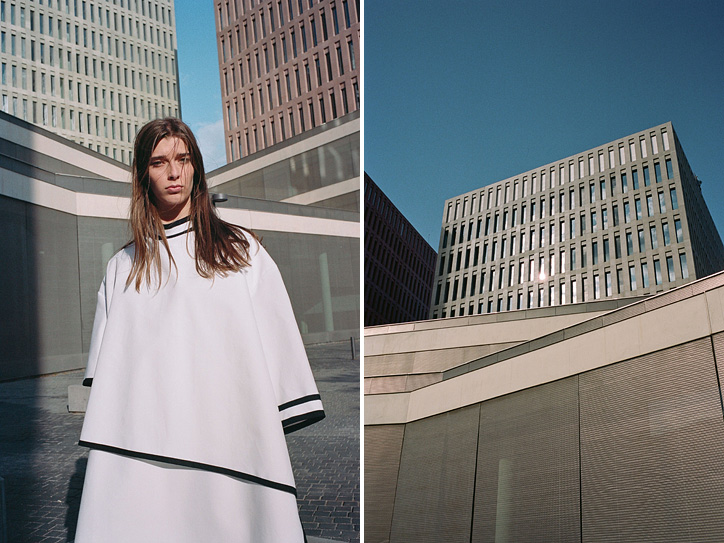 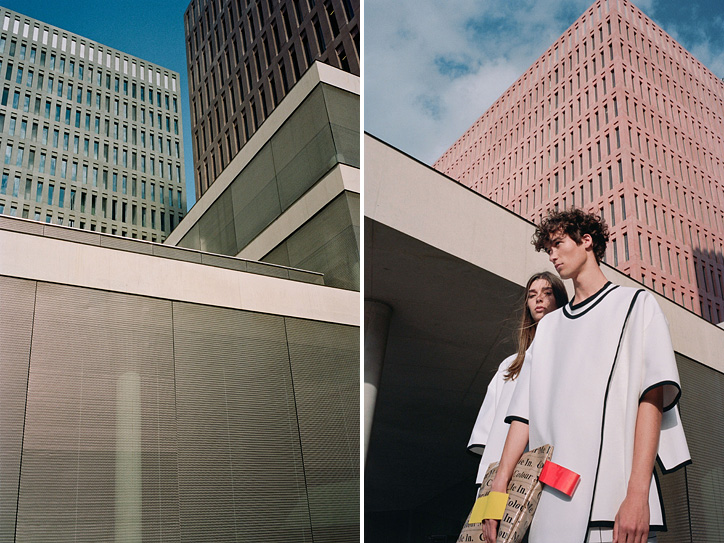 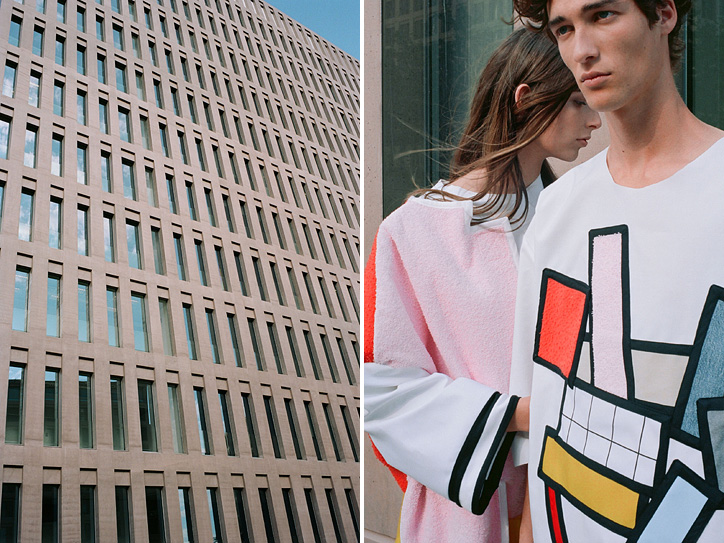 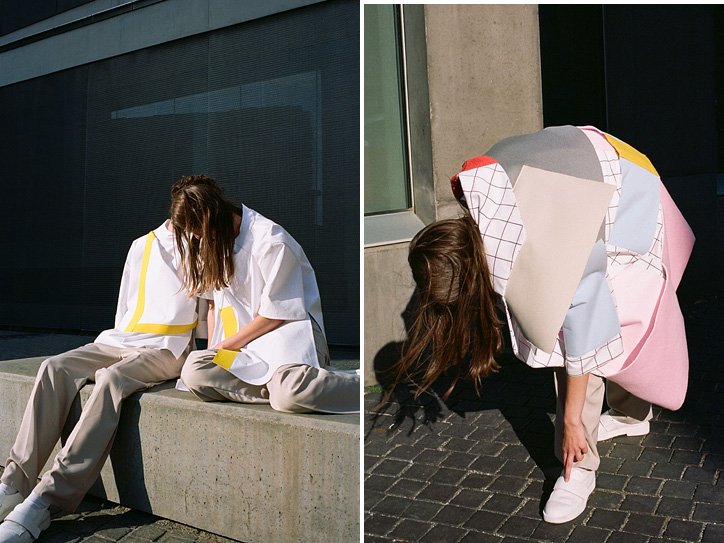 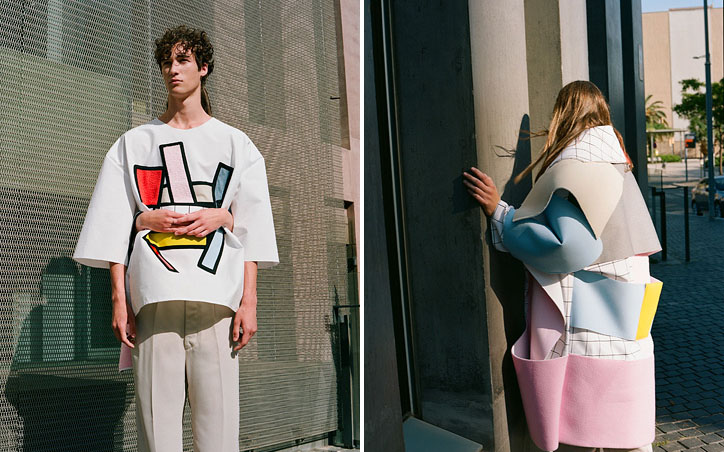 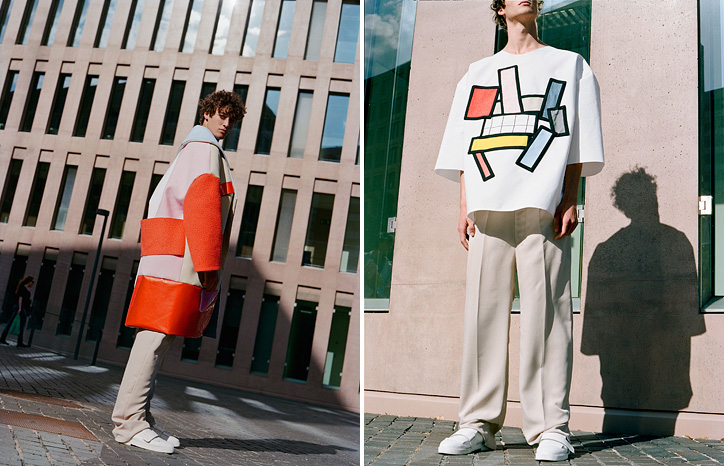 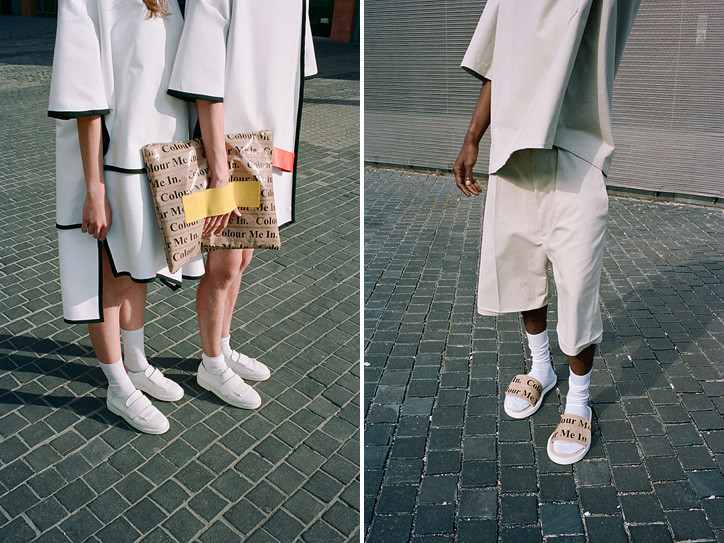 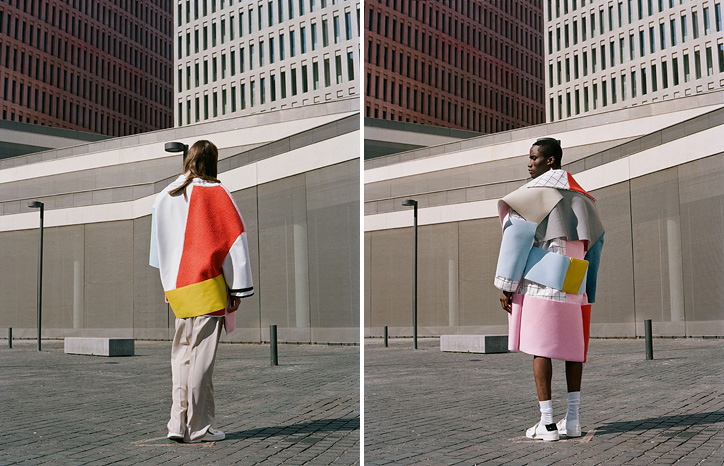 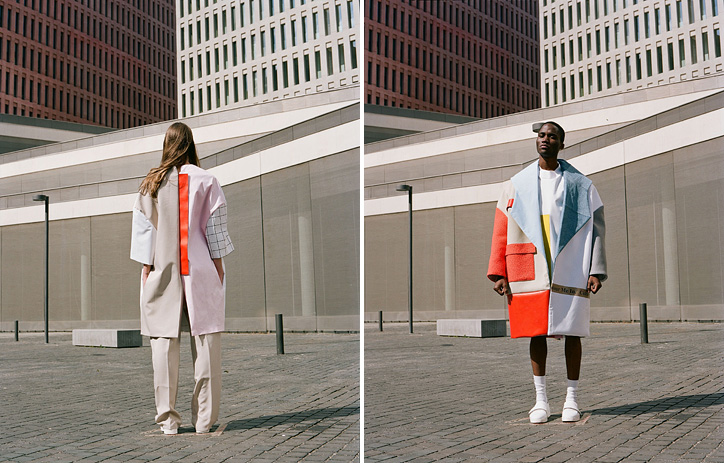 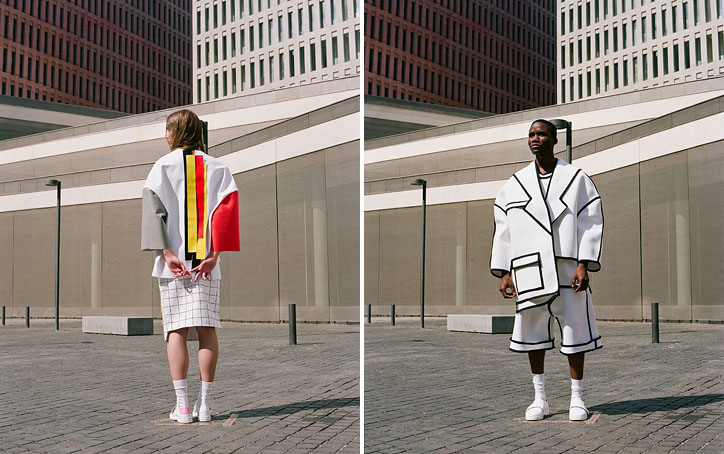