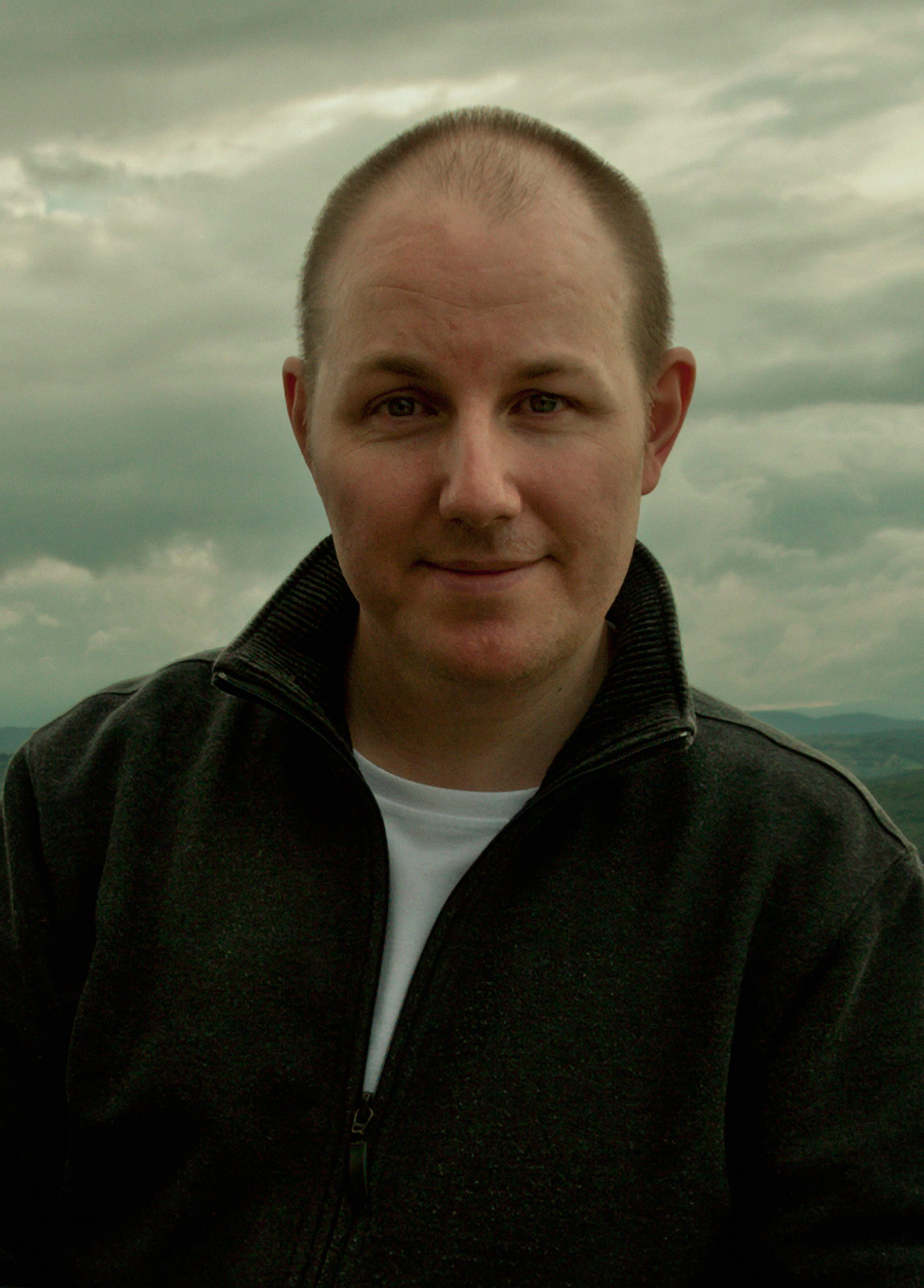 Taoist cosmology, never-ending loops, organic forms, geometric patterns and people’s doppelgängers are some of the trippy things you’ll see in his work. A former cameraman at BBC, Doug Foster got back to his roots and started making creative and breathtaking film work after ten years. His large-scale projection installations are otherworldly, and we were instantly fascinated by them. For that reason, we spoke with him about the references and intentions pointed out in his works.
Tell us, who is Doug Foster?
I’m an artist and filmmaker working in London. I’m most happy when creating large scale projection installations for art exhibitions set in dark, atmospheric locations.
How and when did you end up being a video art maker?
I studied animation in the early eighties. My degree show consisted of a walk-in box with a rear projection screen roof and mirror walls that reflected the overhead imagery (and the viewer) to infinity in all directions. My first job was as an animation cameraman at the BBC. This led me to become a special effects cameraman, a lighting cameraman and then a commercials director. The process of creating big budget commercials was enjoyable and fulfilling in many ways, but it was limited creatively speaking. Ten years ago, I returned to my roots and started making projection installations again.
I’ve seen in your website that ‘mesmerizing’ is the word most often used to describe your work. How would you explain this?
Many of my works feature spatial and temporal repetition. The patterns and rhythms that I use are designed to beguile the eye and lower the heart rate. Often my aim is to create a calming sanctuary from the stress of modern world. 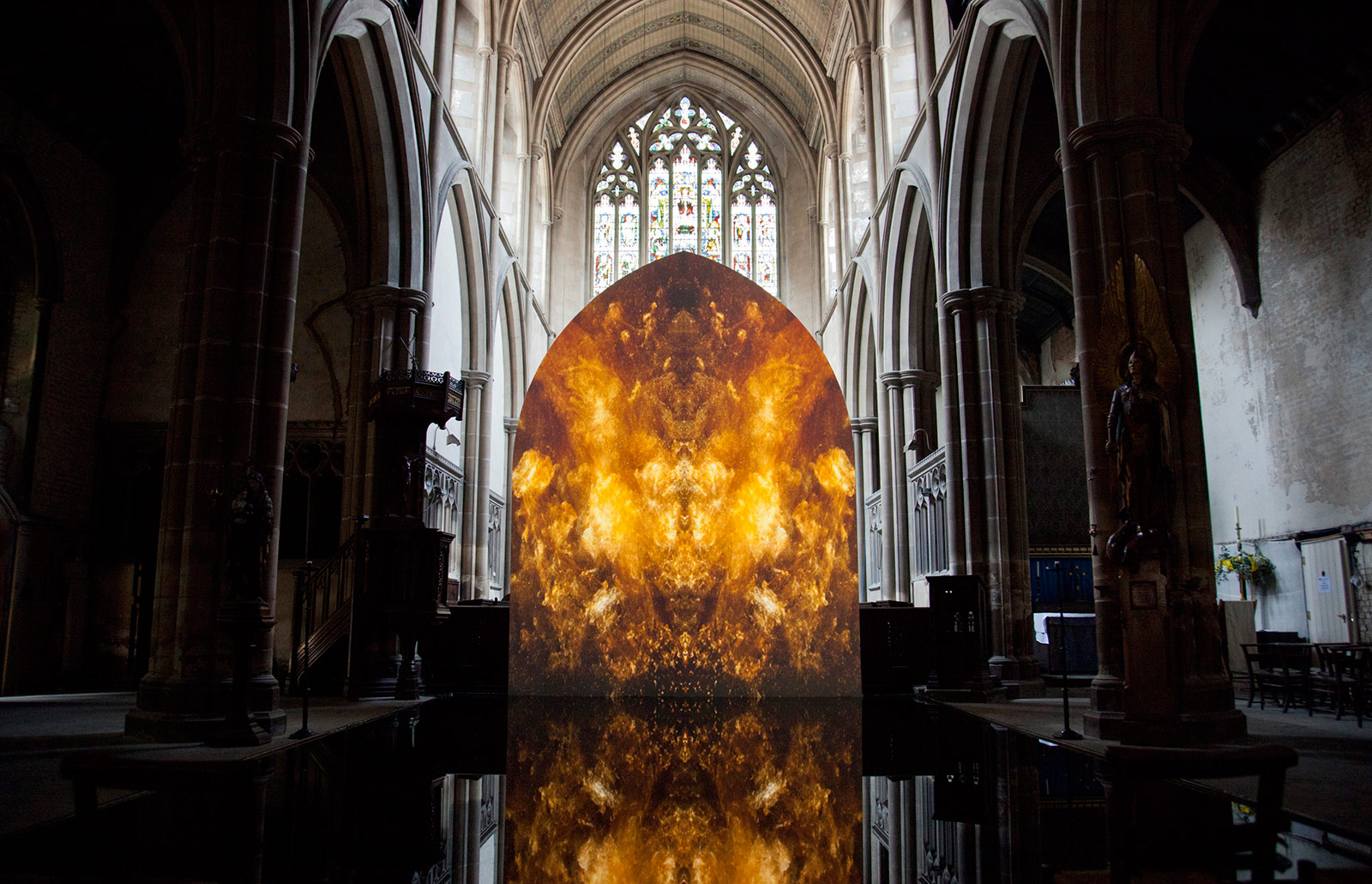 By the way, how would you define your work style? And is there a special tool or element you can’t get rid of that helps creating your personal style?
I don’t strive to have a style as such, but my work often consists of precise geometric arrangements of recognisable organic elements. I never generate imagery on a computer, though I process and edit digitally. Every element that I use is filmed in motion, often rotating on a turntable or sinking through water.
Have you been influenced by any artist or art movement to become the video maker you are today? What else inspires you on a regular basis?
Dada and the Surrealists were early influences, but now I’m most inspired by science, nature and the intricacies of human perception.
Let’s first begin talking about BOB, one of your earliest works. Could you tell us more about the mysterious character involved in this video? What is the aim hidden behind geometry and rhythm throughout BOB’s endless journey? What feeling did you first expect from those who saw this work?
If you join a length of film to itself to form a loop and put it on a projector, the action on the film will endlessly repeat. If you twist one end of the film by one hundred and eighty degrees before you join it, the action will repeat just the same, but will flip to a mirror image on each alternate repetition. This is the structure of BOB: a man with a suitcase walks down a long corridor and passes his doppelgänger. As he continues, this happens again and again until we realise that there are an infinite number of Bobs travelling in both directions along an endless corridor.
Because the corridor and Bobs are symmetrical there is no way to know whether we are following one Bob on his endless journey or watching alternate Bobs walking up and down one small section of the corridor. The idea was to exploit symmetrical geometry and the rules of film editing to create a situation that could be interpreted in two different ways. Much the same way that a Möbius strip can be experienced as having one surface or two. My hope was that people would enjoy the ambiguity of the looping narrative.

Let’s move on to another project, like Chimera. You said in its description that it “was inspired by the genetic soup in which we all swim.” What are the references you mention in this project? Did the no-lights room play a relevant role for the run of this project? Furthermore, could you explain the relation between Chimera and The Heretics’ Gate, another of your projects?
Chimera was projected onto a six-metre-high arched screen and reflected in a nine-metre-long pool at a Lazarides gallery show called The Minotaur. I took the theme of genetic engineering and created an ever evolving, bilaterally symmetrical composition that seemed to form demonic faces, human body parts and primitive aquatic life forms. The exhibition was staged in a massive complex of Victorian vaults underneath Waterloo station and the brick arched architecture had a huge influence on the form of the installation.
The Heretics’ Gate is the sister work to this piece. It is inspired by Dante’s Inferno and depicts an ethereal vision of hell with similar filming techniques. In theory, the two films could be projected onto two sides of the same arched screen as they share the same soundtrack.

Tell us about your most recent artwork, entitled Dormouse, which you presented at The 14th Factory in Los Angeles. Why did you choose to affiliate your project to these small rodents? What do these Chinese artists performances represent? And what role does the duplication of elements play in this clip?
Dormouse was made in collaboration with Simon Birch, who curated The 14th Factory show. The exhibition represents a hero’s journey and Dormouse represents Alice’s Adventures in Wonderland’s rabbit hole that takes you into another world. The Chinese performers are defending themselves from external forces. Their circular formation protects the central portal.

The Marvel is another outstanding short clip of yours, also showcased at The 14th Factory. Could you please speak about the link between The Marvel, the trigrams from Chinese divination and what we are able to see on your projection?
This installation is at the end of The 14th Factory journey and explores ideas of transformation through a visual interpretation of the eight trigrams that constitute the Later Heaven Bagua: wind, fire, earth, lake, heaven, water, mountain and thunder. The constant swirling composition is continuously reconstructed by a procession of the elements, echoing the way that we renew our cells but retain our forms.

What is the future these trigrams are predicting? How and when did you get interested in this ancestral Chinese spirituality?
I researched the I Ching for this project, but I only found it interesting as another example of the human desire to find patterns in nature that may explain our origins.
Are you currently working on new projects you would like to share with us?
I’ve just finished some films for Unkle’s new album and two new works for the Sedition online gallery.
Where are planned the next exhibitions presenting your works?
Nothing that I can talk about at the moment.