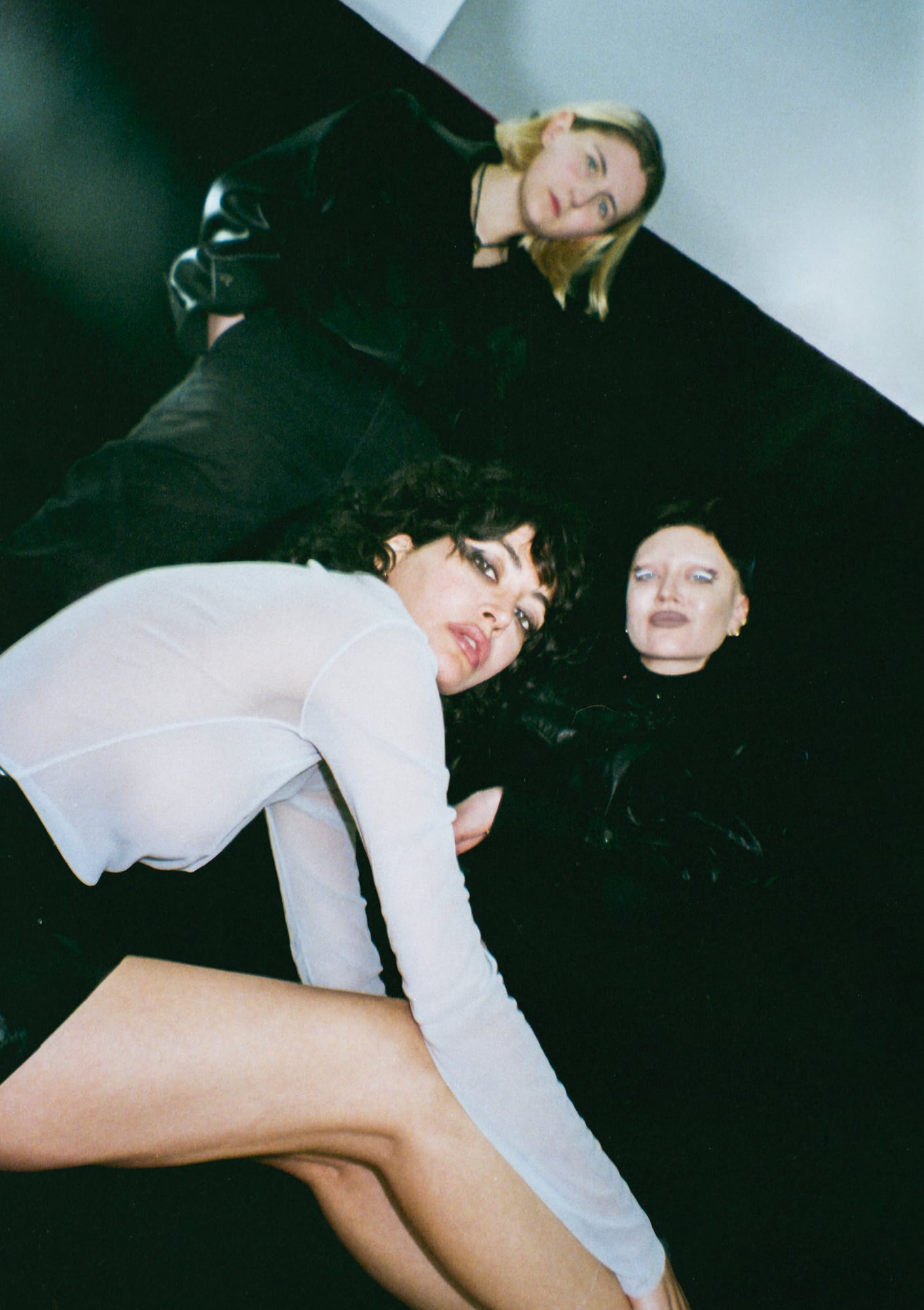 The London-based post-punk trio deep tan are releasing their debut EP creeping speedwells tomorrow. They set out with curiosity and criticism composing an EP that leaps between tempos and indie to punk soundscapes with unique intriguing effect.
On the bank holiday weekend they played a cool set at DIY’s festival, with Celeste on base stepping to the front of the stage to dance, as lead singer Wafah remained more aloof in her delivery. More shy than I expected, the band are growing into themselves and it’s a breath of fresh air to see some modesty in a world of big egos. The EP itself alludes to an outsider, imposter feeling of thriving weeds – creeping speedwells are the weeds featured in the artwork and title. Their track, hollow scene even speaks to “Cultural and social dissociation as a gateway to an easier life, but also acknowledging that this in itself is - in the philosophical sense of the word - absurd.” This up-rooted feeling is familiar to anyone trying to blend in when they really do not.

You all bring great and unique perspectives to the band – Wafah on vocals has a background in pop, Celeste on bass has been a DJ and puts on queer nights, and Lucy on drums. Where did you all meet each other?
Wafah had started the band with another bassist who decided, after six months, to move to LA. At the time, Wafah was living with Celeste, who had played bass for years, so it happened very naturally. We met Lucy at Celeste’s queer night at Dalston Superstore and, when we were looking for a drummer, she was the perfect fit.
Your early release shimmer give us two starkly contrasting tracks – is that anything to do with the different references you all bring to the band?
Perhaps partly because of the different references we bring to the band, but the reason is mainly a practical one. Our shimmer release has two tracks because of a request from our record label, Practise Music, who wanted a B-side to go with the track shimmer, but when we thought about the tracks we already had, none felt right as the B-side. Because of this, we decided to give ourselves a challenge: to write a track specifically for the release, to bring a darker side to shimmer to provide a contrast. We had a week to write and record it, and initially we discussed making a harsh noise track, but we leant in favour of more driving post-punk, and constant inconsistencies was born. Luckily for us, our label loved it so much that they decided to release it as a double A-side.

Contrast or even contradiction, seems to be an important theme for your up and coming release creeping speedwells (out tomorrow, 4th June). Is making some transitions in tempo between tracks a bit jarring part of deep tan’s punk spirit?
Yes, contrast and contradiction always does it for us! In terms of tempo, we like to work across different BPMs and time signatures when we’re writing, and sometimes work with a few different ones in the same song. Our track on the EP ‘do you ever ascend?’ has four different tempos, which definitely keeps the rhythm section on our feet. We like the fluidity that working with different rhythmic moods can give us, as well as the feeling of freedom that comes with it.
Following on from the idea of contradiction, Haraway writes about that idea of holding contradictions within ourselves, hybridity, in her feminist text A Cyborg Manifesto. Do you believe holding contradictions within ourselves and being at peace with them is something important to the band? Or are you punk purists?
We wouldn’t necessarily say that we feel it’s important to be at peace with our own contradictions, but when writing we do find a lot of fertile ground here. Examining our underlying belief-systems and questioning them. There’s punk spirit in that, but not to the extent that we want to scream about them. What we do is more understated, but the underlying motivation is there. Question everything.
You use red in the EP cover – what is your intention?
We made decisions on the colour-scheme and overall artwork aesthetic based subverting people’s expectations of what a band of women might have as their EP artwork. The fonts are bold, the plant design is a warped, twisted version of a creeping speedwell (a type of garden weed) which looks more like a strange sea creature than a flowering plant. We joked in the beginning that the EP aesthetic has a lot in common with classic action movie posters, but I think that still rings true. 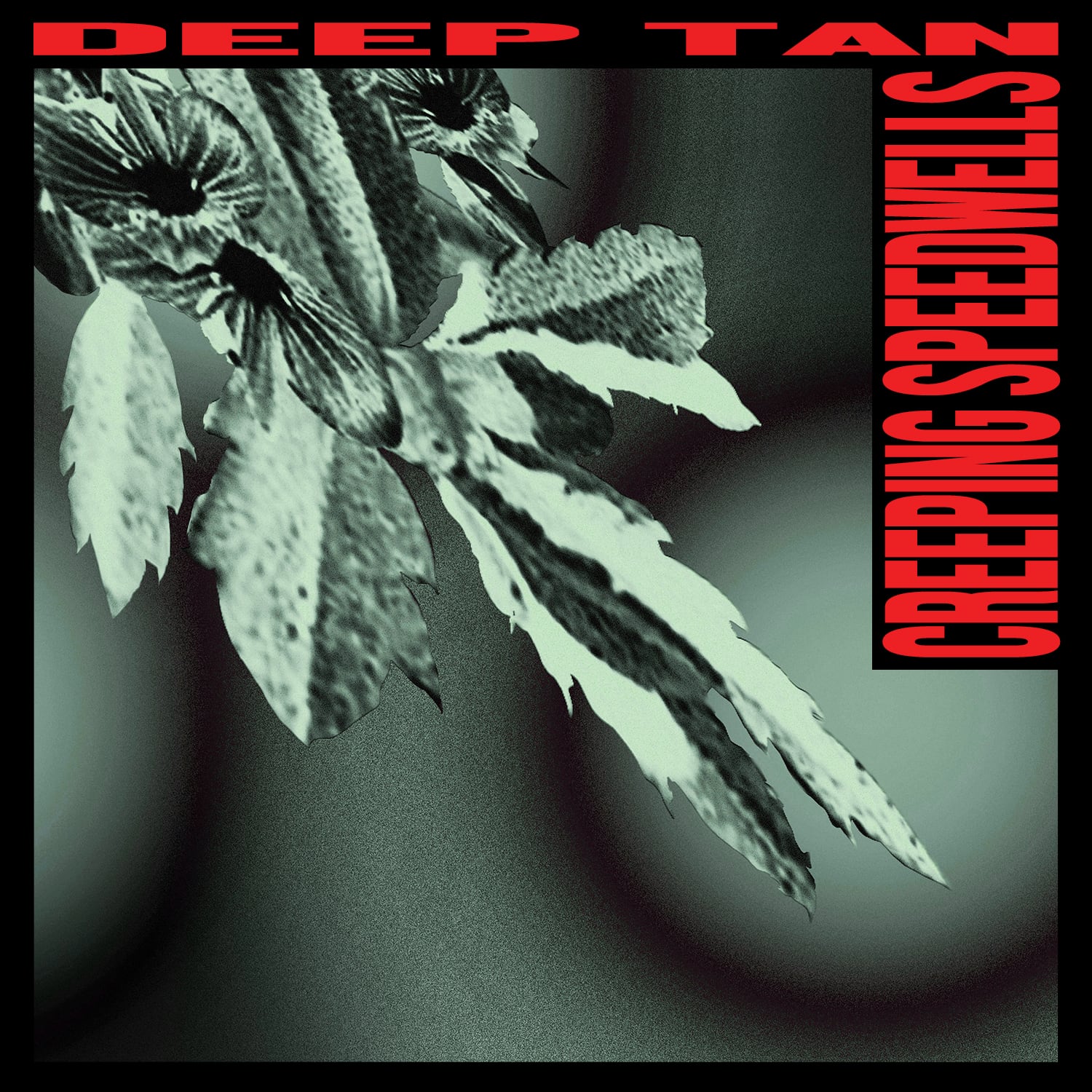 Interviewed for Girls to the Front, deep tan seemed clear on showing you are artists before any label of gender identity. I agree that some journalists can over-determine artists based on identities outside of the music. How do you rise above these kinds of interactions?
Honestly, it’s hard! The main reason being that we still have a long way to go where achieving gender equality is concerned, and we are dedicated to pushing the feminist agenda forwards where we can. However, when our gender is made out to be our defining factor, it feels reductive. Discussions on the subject of us being ‘women’ (two of us identify as women, one as non-binary) in music and the focus on the music itself are two things that we feel are important to be kept in balance.
Your song on the album, deepfake’s lyric “mon corps n’est plus a moi”, (my body isn’t mine anymore) could refer to the feeling of disassociation and disconnection that Camus’ Mersault experiences in L’étranger. Can you tell us more about how the band related to that character when writing the EP?
The connection with Mersault is strongest in our track hollow scene, which is about the feeling of having to move through life with a certain level of detachment in order to function. Cultural and social dissociation as a gateway to an easier life, but also acknowledging that this in itself is - in the philosophical sense of the word - absurd. The search for meaning in a meaningless universe is an idea we return to, and images like the strange, collage-like scenes in deepfake underpin the EP with a disconnected otherness, floating through the void. It doesn’t make sense, but it does! But it doesn’t, haha.

You mentioned a new track of yours is “Britney does math rock” to Loud and Quiet. I wanted to work out which song that is – is it out yet? Is it camelot?
We were half-joking when we said, “Britney does math rock”, but it actually does ring true for the track in question. It’s as-yet unreleased but might one day might emerge to sweep the airwaves with its sexy strangeness. ‘Gimme More’ with prog-rock chromatic-scale guitar lines with a big vocal melody. ‘Hit Me Baby One More Time’ with that freaky bassline, etc.
Finally, how was playing some tracks off the EP at DIY’s Big Bank Holiday Weekender?
We just played it last weekend! It was the first time we played our EP tracks live and the first time we played live in a year. We had the best time and it was great to see friends playing their own killer sets too - Goat Girl, Talk Show and Lynks forever!