The prince of prints 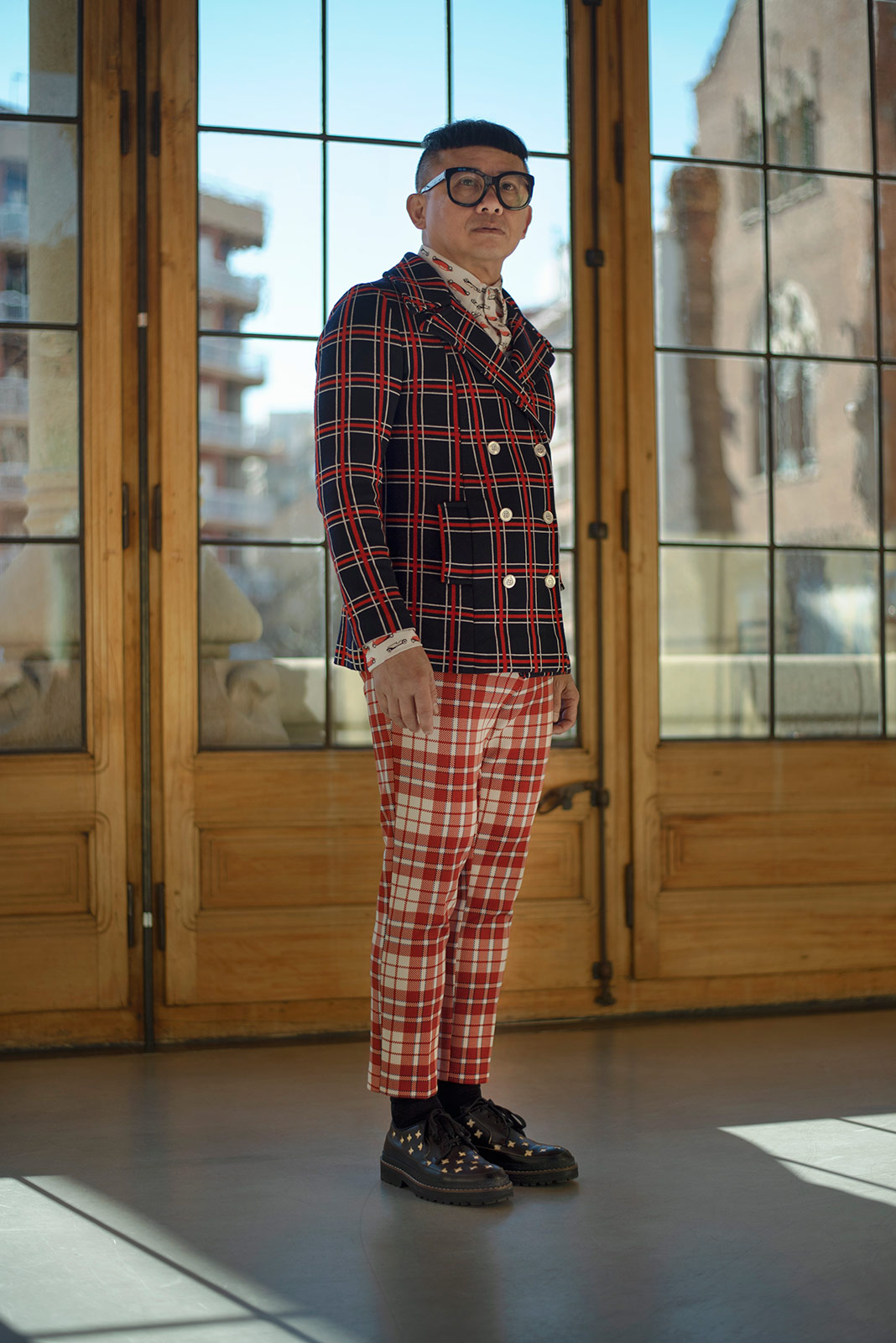 Thai fashion designer Chu Suwannapha decided to take a trip to the city of Cape Town (South Africa) and instantly fell in love with it the moment he stepped out of the aeroplane. He was so enamoured by the blue ocean, the skyline and their spicy curry that he decided to build his life there, just like that, on a whim. Being a total unknown to other creatives of the region, he started out small by working for local fashion magazines, until he became the fashion director of some of the most prestigious ones in the country.
After being constantly inspired by South African streetwear he created his brand Chulaap in 2015 as an ode to the many cultures and traditions the city holds, and in such a short time, he has earned himself quite a significant cult following. Powerful bold African prints and colours with his own touch of Asian flavour is what has won over the hearts of those who get to see his striking designs. After all, they don’t call him the ‘prince of prints’ for nothing.
For starters, could you tell us a little bit about yourself?
I was raised in Thailand but I live and I’m based in Cape Town. I studied fashion at ESMOD Paris before heading to South Africa, where I had years of fashion experience as fashion director of You, Huisgenoot and Drum weekly magazines.  I have been voted ‘Most Innovative’ at the South African Style Awards and launched the Chulaap label at South African Menswear Week in February 2015 to instant acclaim.
As you’re originally from Thailand, why did you decide to move to South Africa? What is it about the trip you took to Cape Town that made you want to stay for so long?
I came here to Cape Town as a visitor and I wasn’t planning on becoming a South African citizen. I love travelling in general and have always believed in meeting the right people at the right time for the right opportunity. I fell in love with this place since I first set foot in the city – Table Mountain is the backdrop with the 360-degree reflection of the crisp blue oceans in summer. The fashion is cosmopolitan, and I love the open-plan landscape and the spicy Malay Curry. It is a magical and inspiring city.
Nowadays, African fashion is very much talked about and is really influential in the industry, however, it wasn’t like that just a few years ago. When you first got there, you weren’t afraid that a move would be too risky for your career. Life is always about taking a chance or a risk and meeting the right people at the right time. When I launched Chulaap, I was still keeping my permanent job for the first two years as a fashion director – until last year. 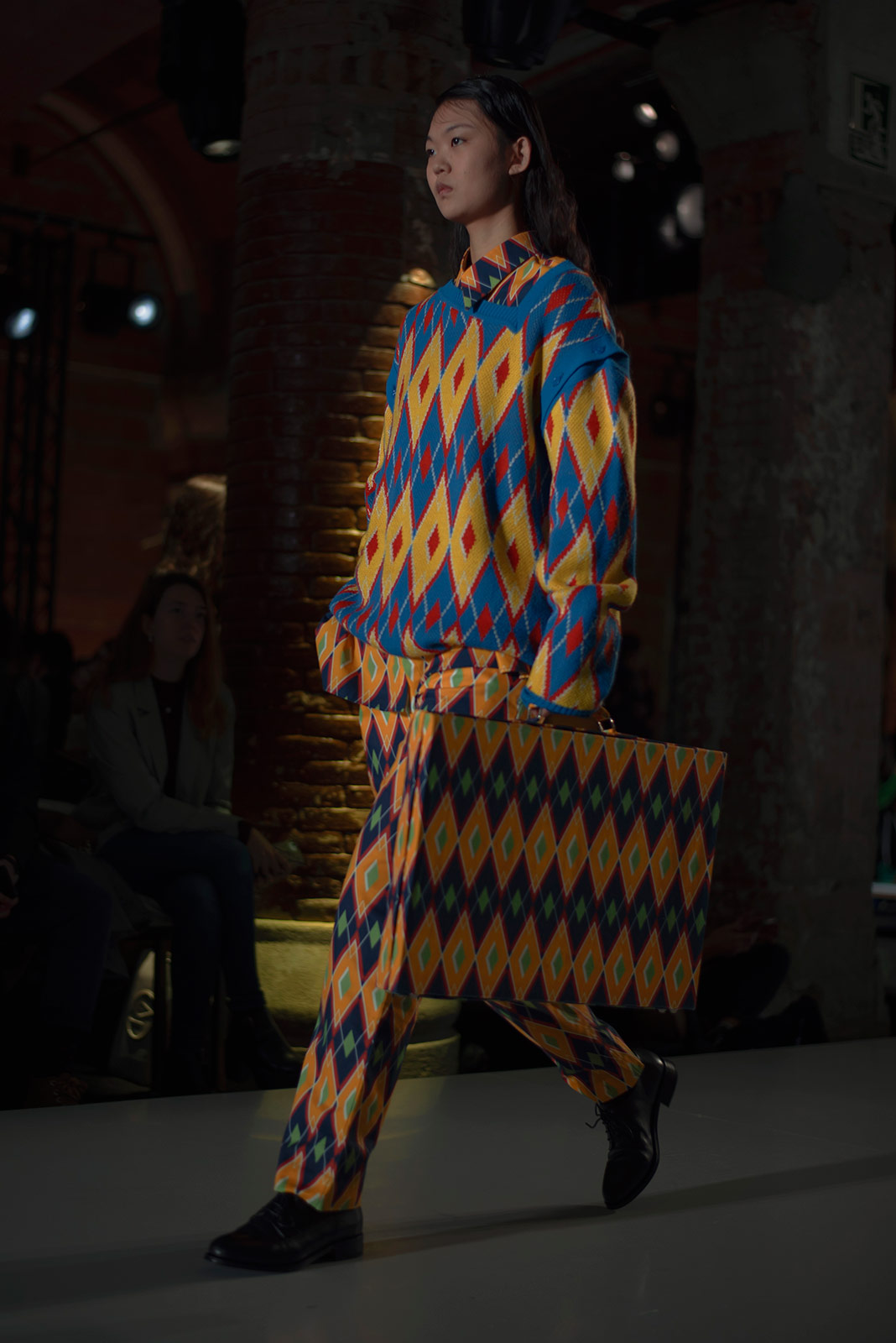 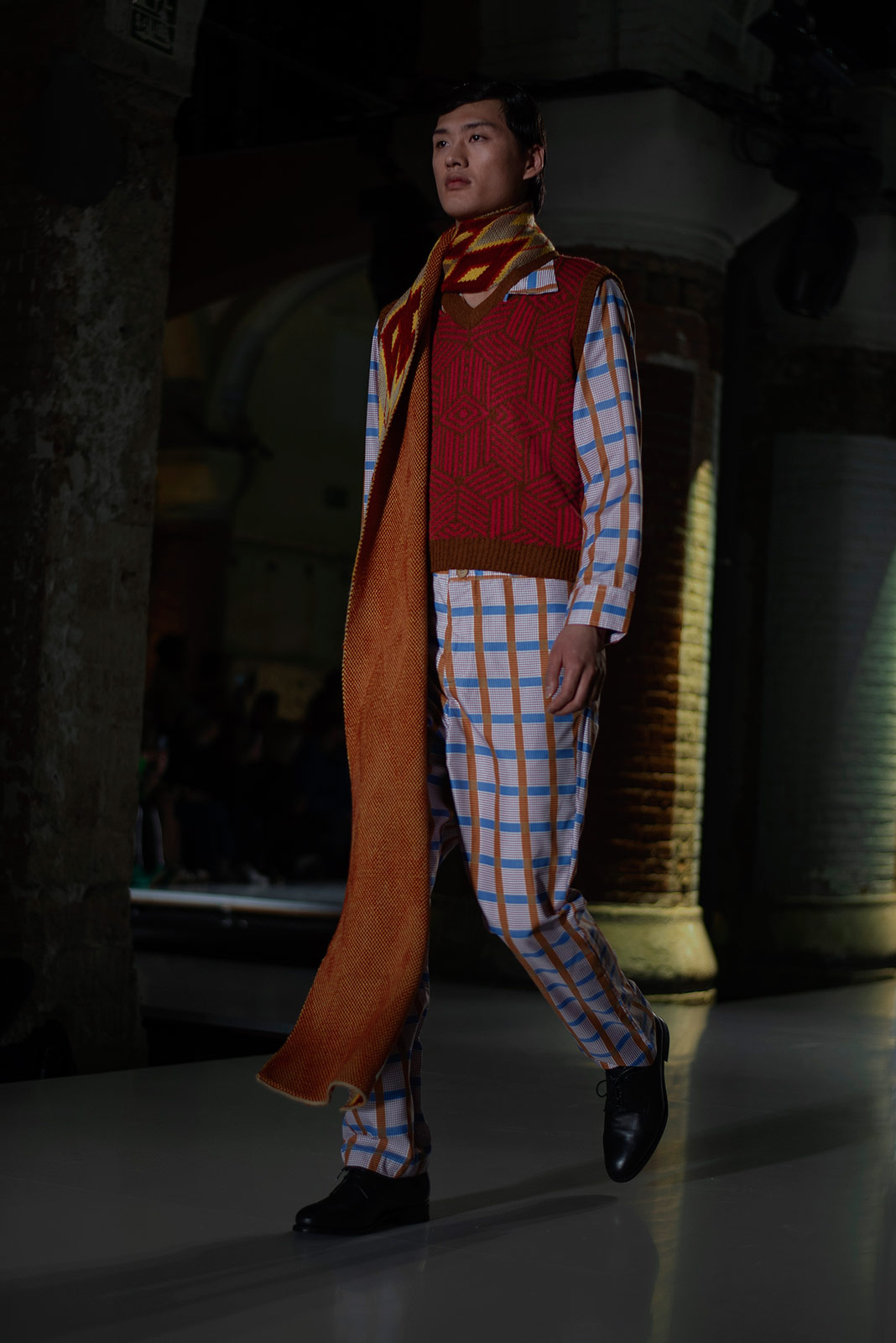 You’ve mentioned on other interviews that you always try to bring a Thai influence to your brand. Which elements of your designs would you say show this?
Mostly you will see it through my styling of the little details and the cutting of the garments. The patterns are loose and comfy such as boxy shapes or kimonos. Let’s say… Chulaap is an African collection with an Oriental flavour.
You started out as a fashion director for a few South African magazines, and I understand you’re still going at it. However, why did you want to create a brand of your own? Was it not fulfilling enough?
Rome wasn’t built in a day. I was a fashion designer before I came to Cape Town. No one knew me in the beginning. Working as a fashion director for a magazine was how I built my name and my credibility. I used my designing experience into my styling career until almost four years ago, I think it was the right time to continue what I have always been. I am a fashion designer no matter what and will always be.
You’ve been called the ‘prince of prints’, and I can understand why. What is it about prints that brings you so much joy? The colour or maybe the maximalism it presents?
‘Prince of prints’ is the given name from my followers on my Instagram page. I created a unique character to draw attention on social media and it became my trademark. Every print tells a story, that’s what Chulaap is about. It started with falling in love with Cape Town and the diversity of the cultures. There is something raw about African prints. The unique fashion on the streets and the fascinating arts are my everyday inspiration. I am an outsider, not born and bred in Africa, that’s the reason why I see and use the African prints in different dimensions. African prints give me happiness and fun. 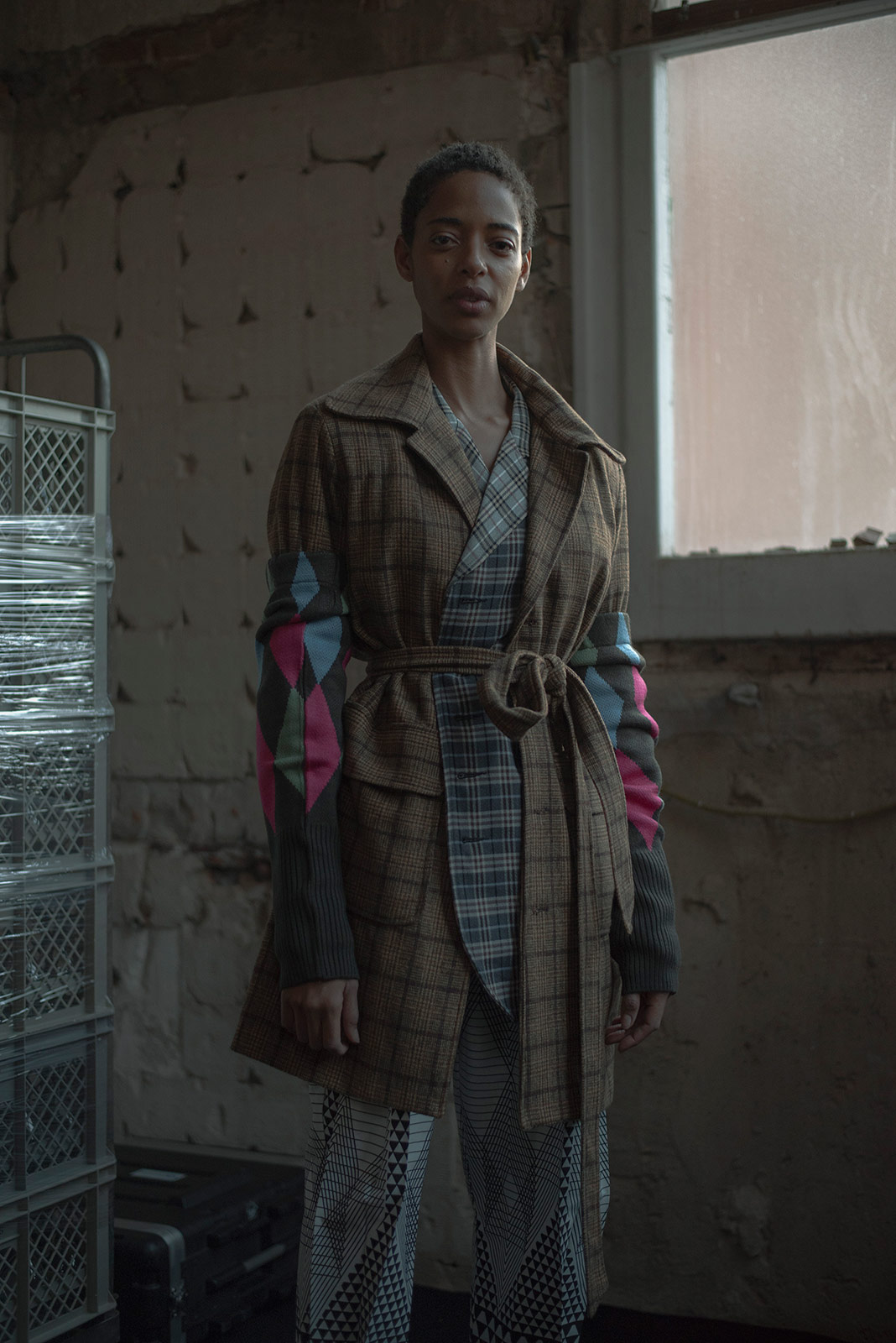 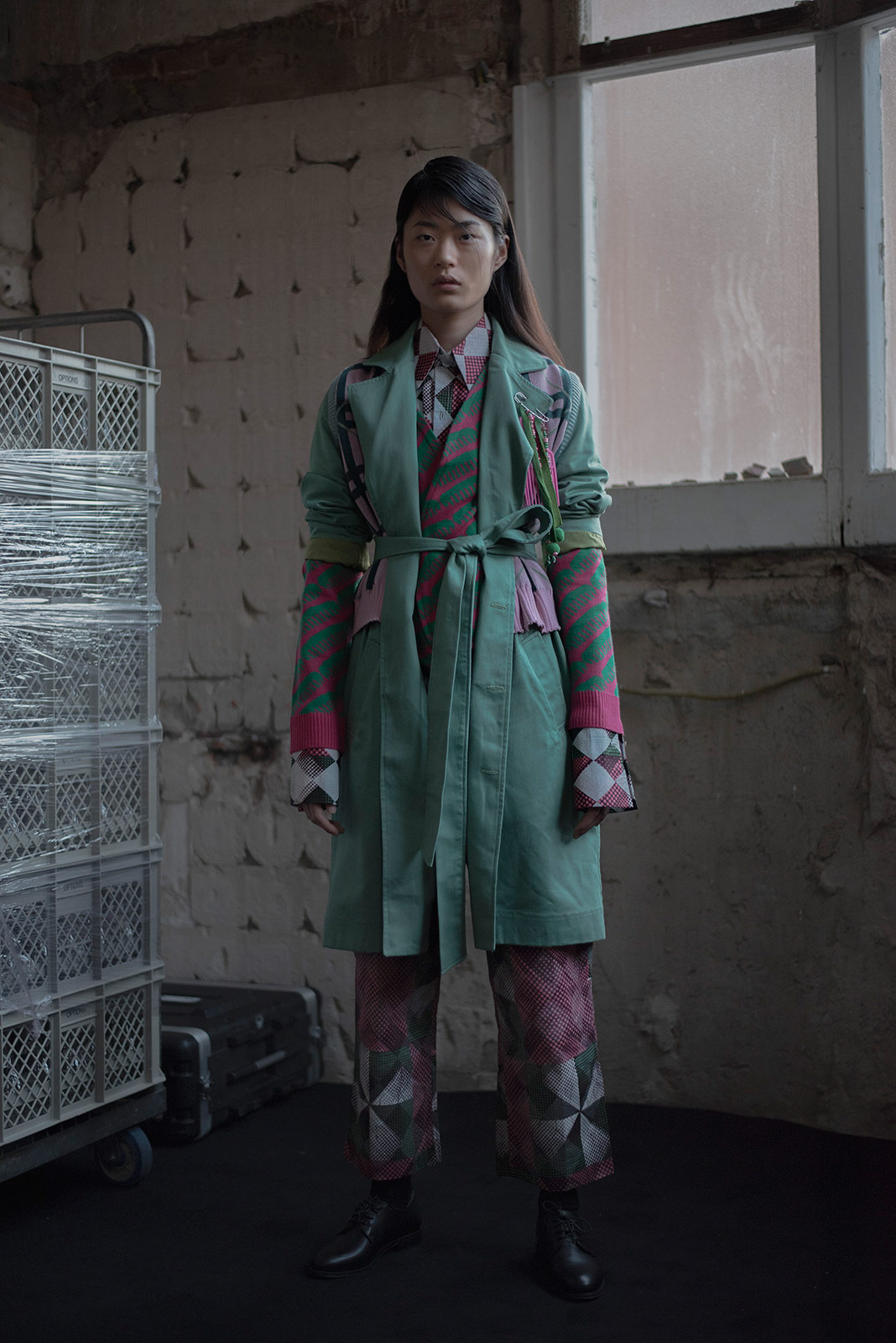 Who would you say you design for?
Chulaap is wearable art and it’s made in Africa. My design is androgynous and timeless. Nothing will say for men or ladies or any age group. My customers have been buying Chulaap via my Instagram account lately. They are global travellers with a positive energy. Fresh, bold, artistic, stylish and modern, but straight-forward dressing is their dress code identity.
On your latest collection, presented during 080 Barcelona, you used a rat tail comb as an accessory which is, for example, used as a brooch on top shirts or blazers. What is the reasoning behind this?
The main inspiration for this collection is from the Pantsula dance, which is a streetwear trend in South Africa. It is a traditional energetic dance in the black townships of South Africa. I bring a twist of the traditional dandy or dapper prints to make them more interesting with the layering of knits and deconstructed coats and jackets. This collection is all about loosening up the traditional preppy dressing with bold stylings or, in other words, the look is very boho dapper. Combs are a symbol of ethnic hair in my opinion. I use the silhouettes and laser Perspex-cut pieces of it to add something unexpected and quirkiness to the collection.
Where do you see Chulaap in the next couple of years?
To continue keeping the brand believable and consistent, exciting and unexpected. Global accessibility will be my main focus. The future is unpredictable, but I would like to launch my womenswear capsule collection before birthing my limited-edition home-wear line. 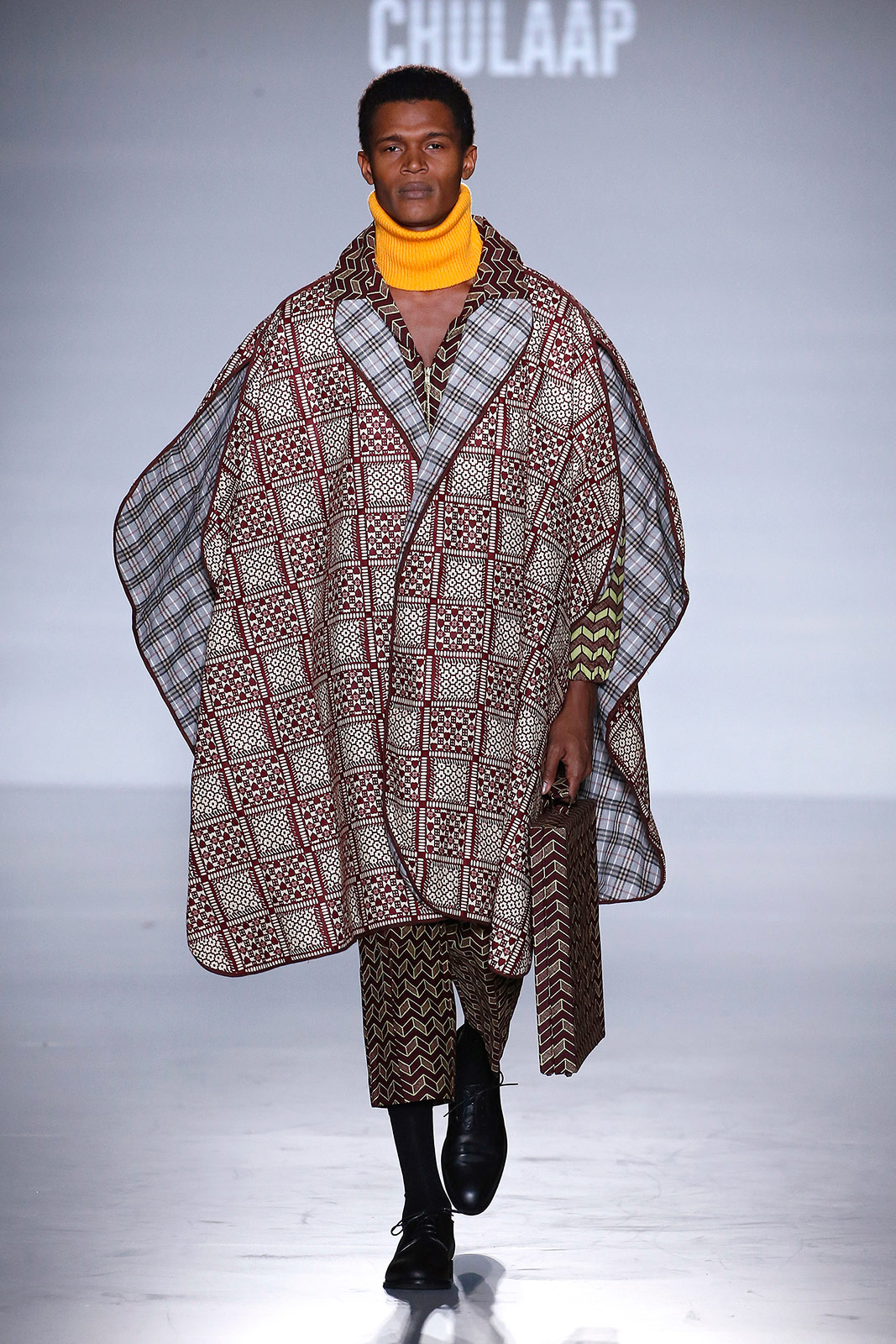 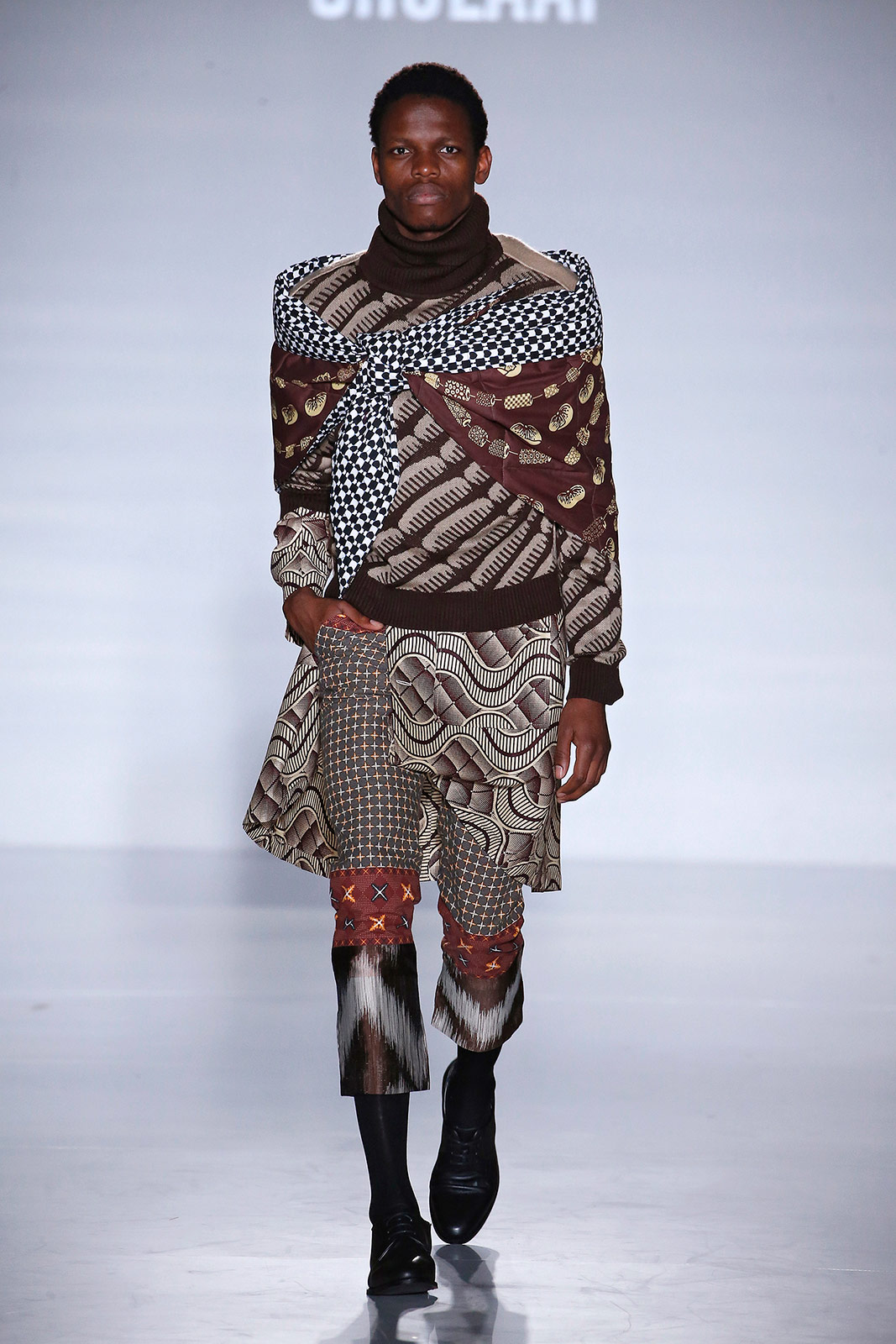 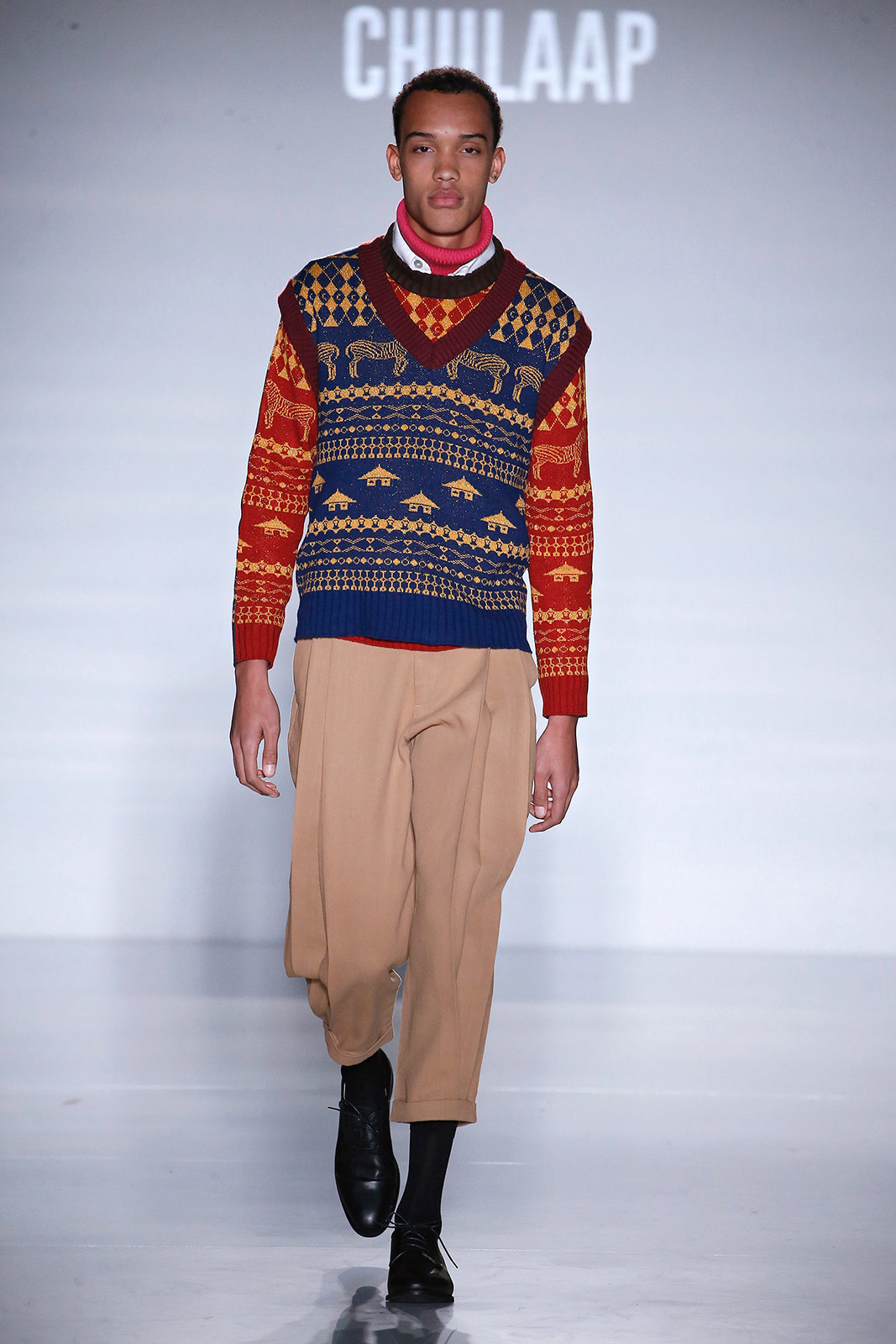 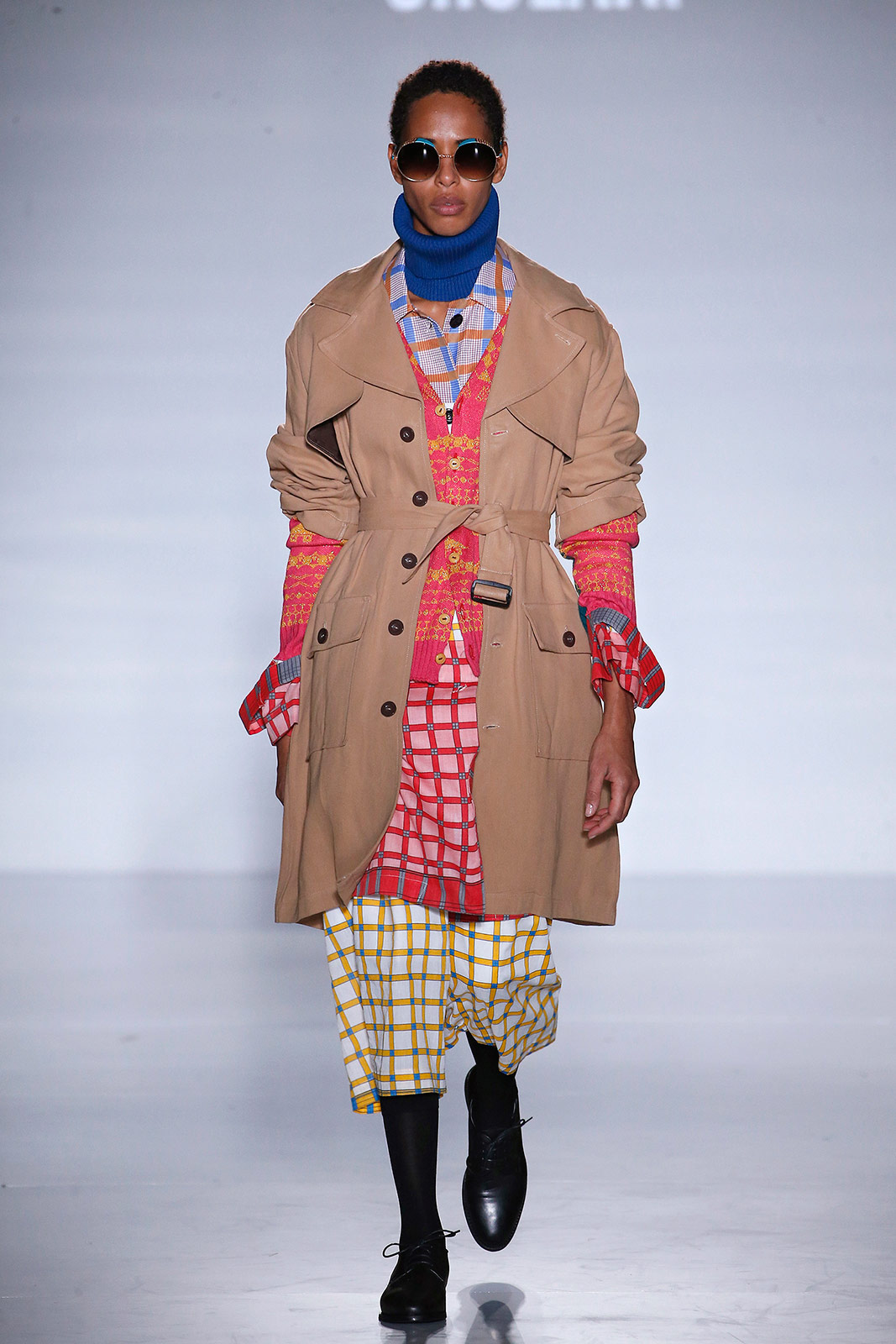 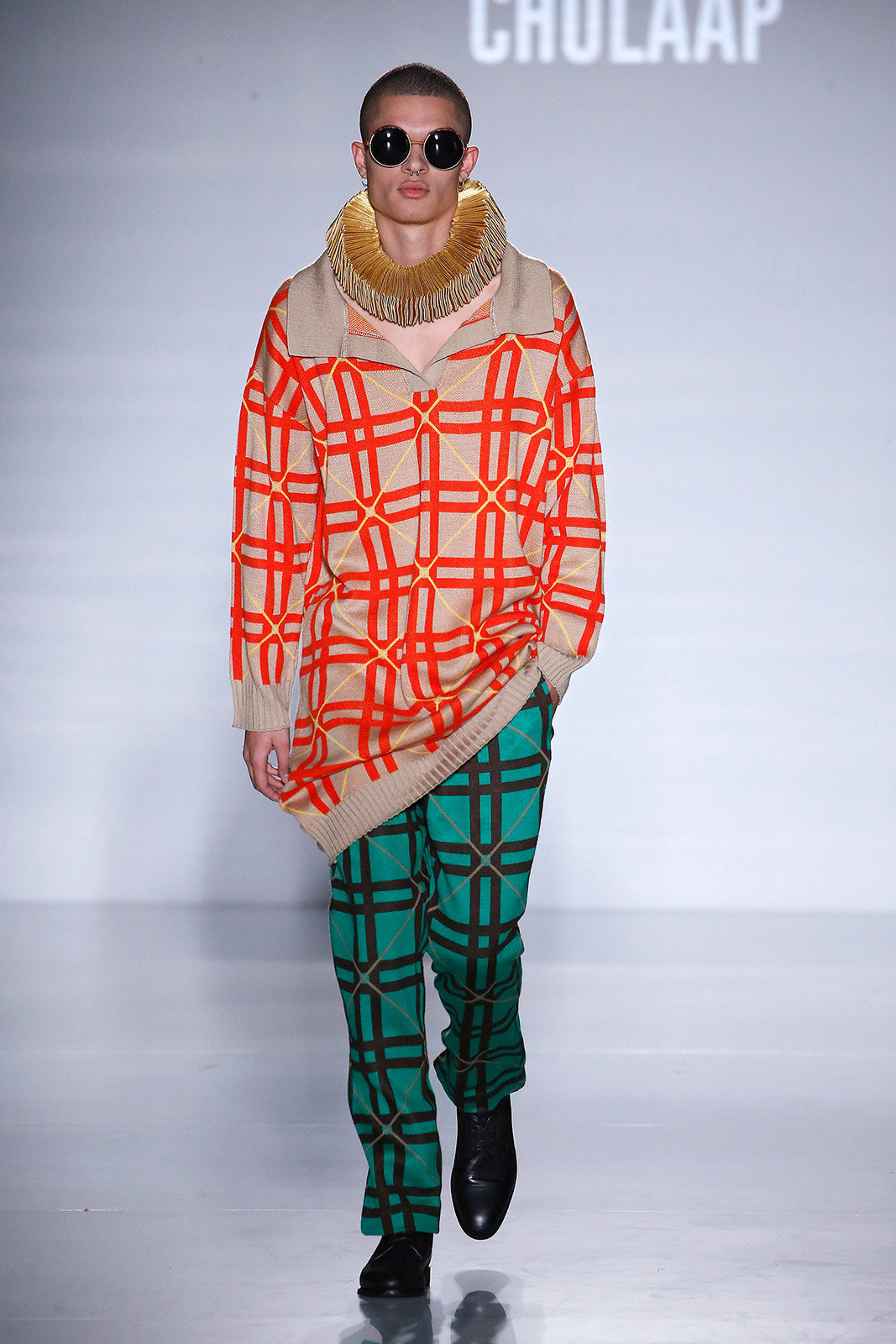 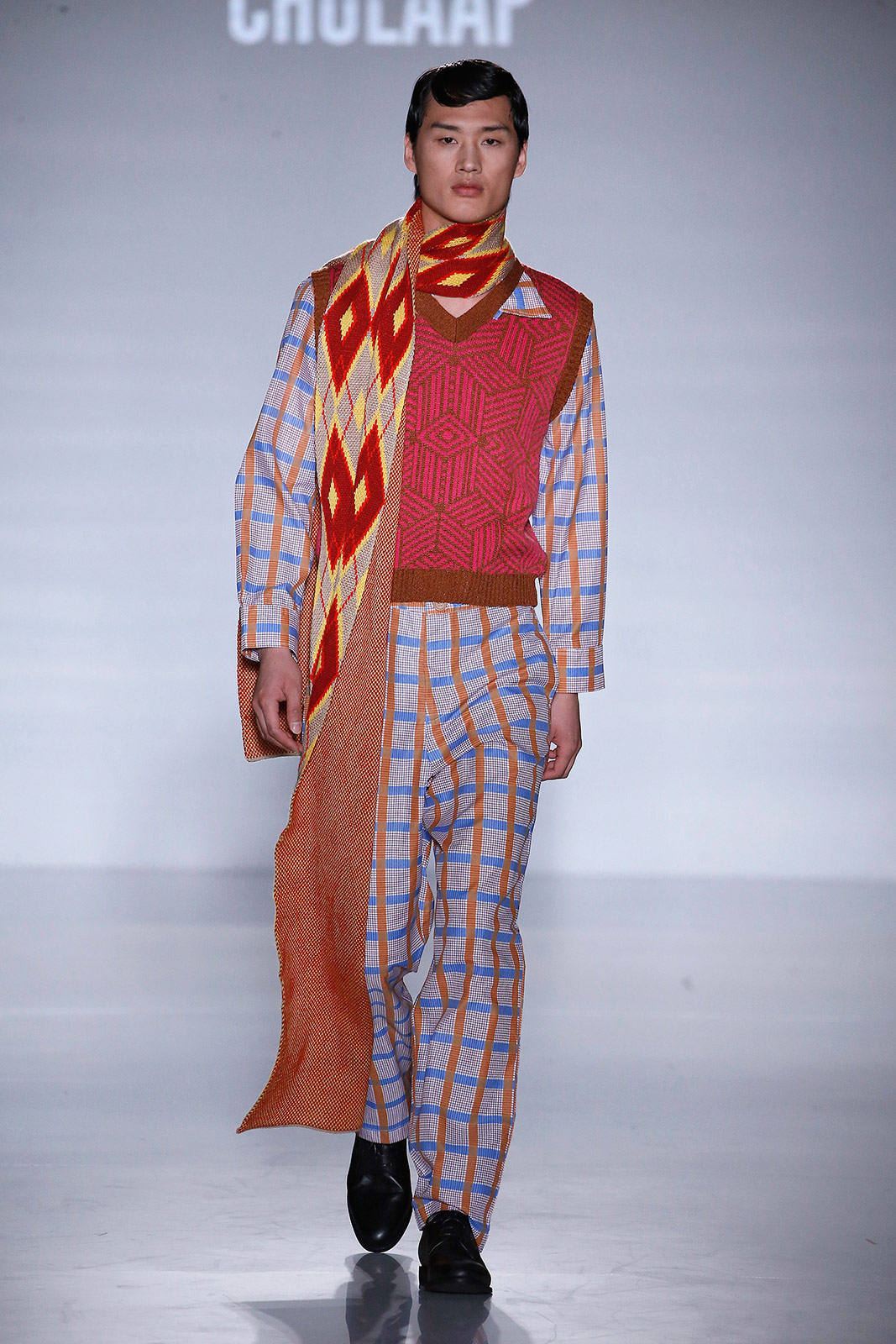 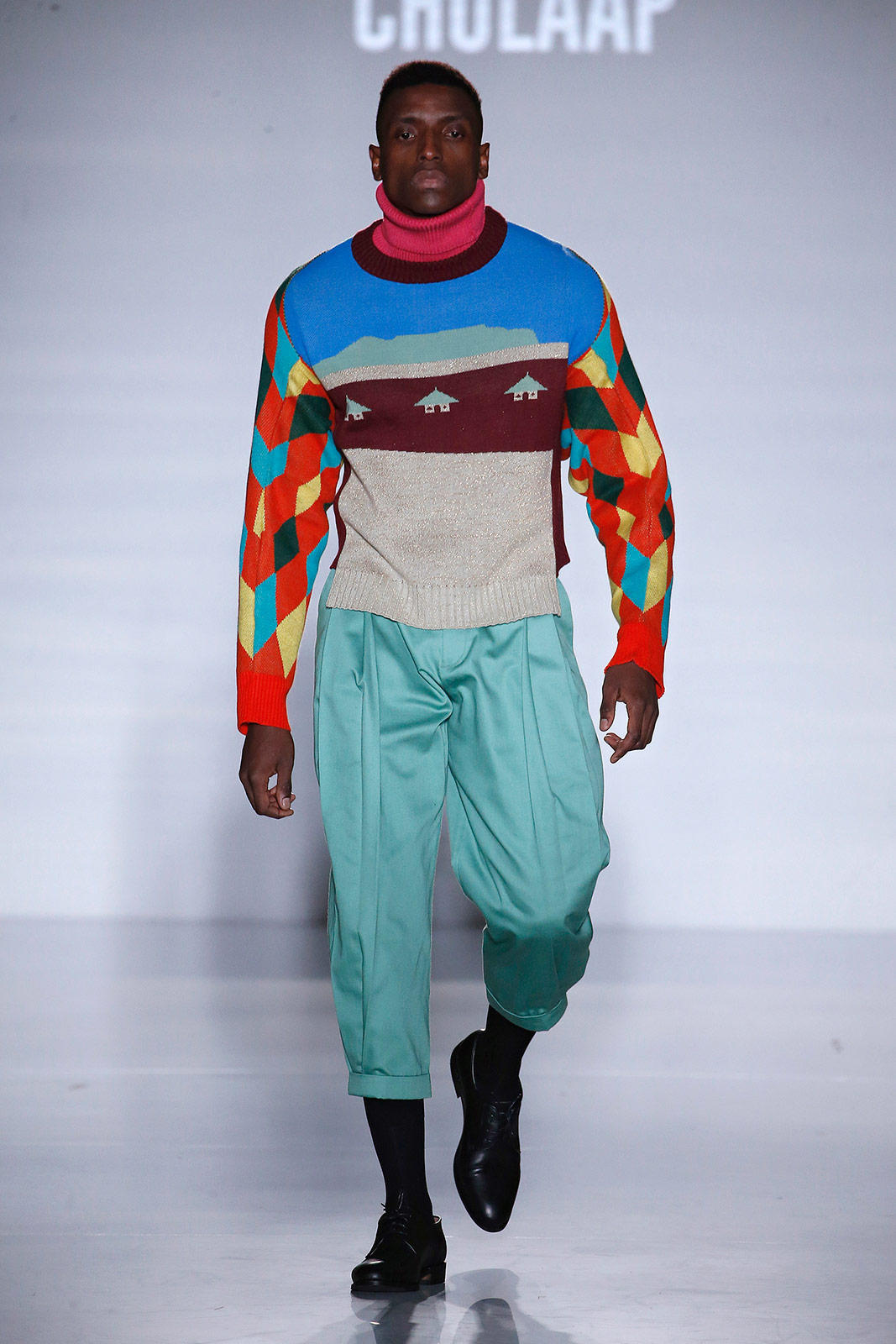 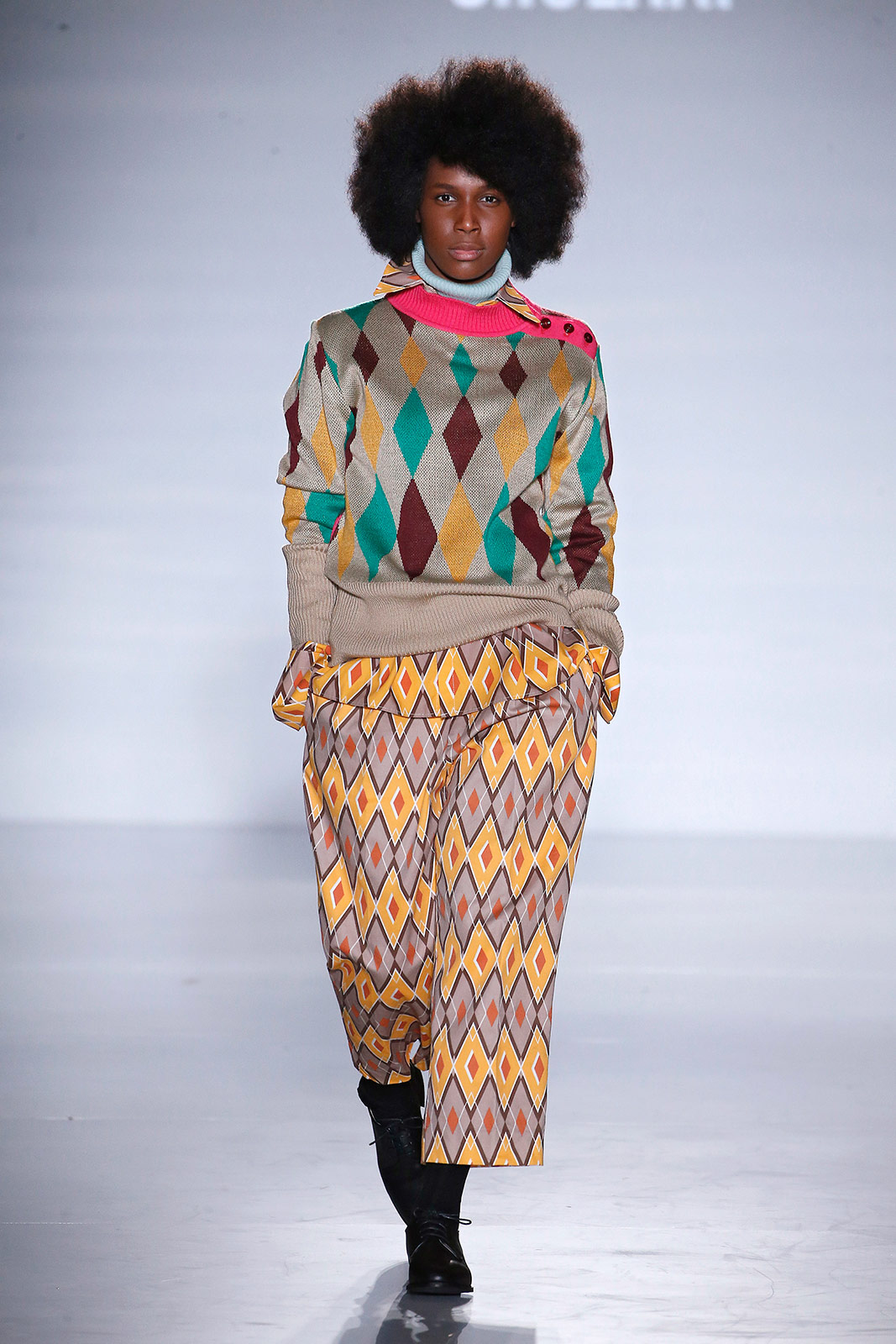 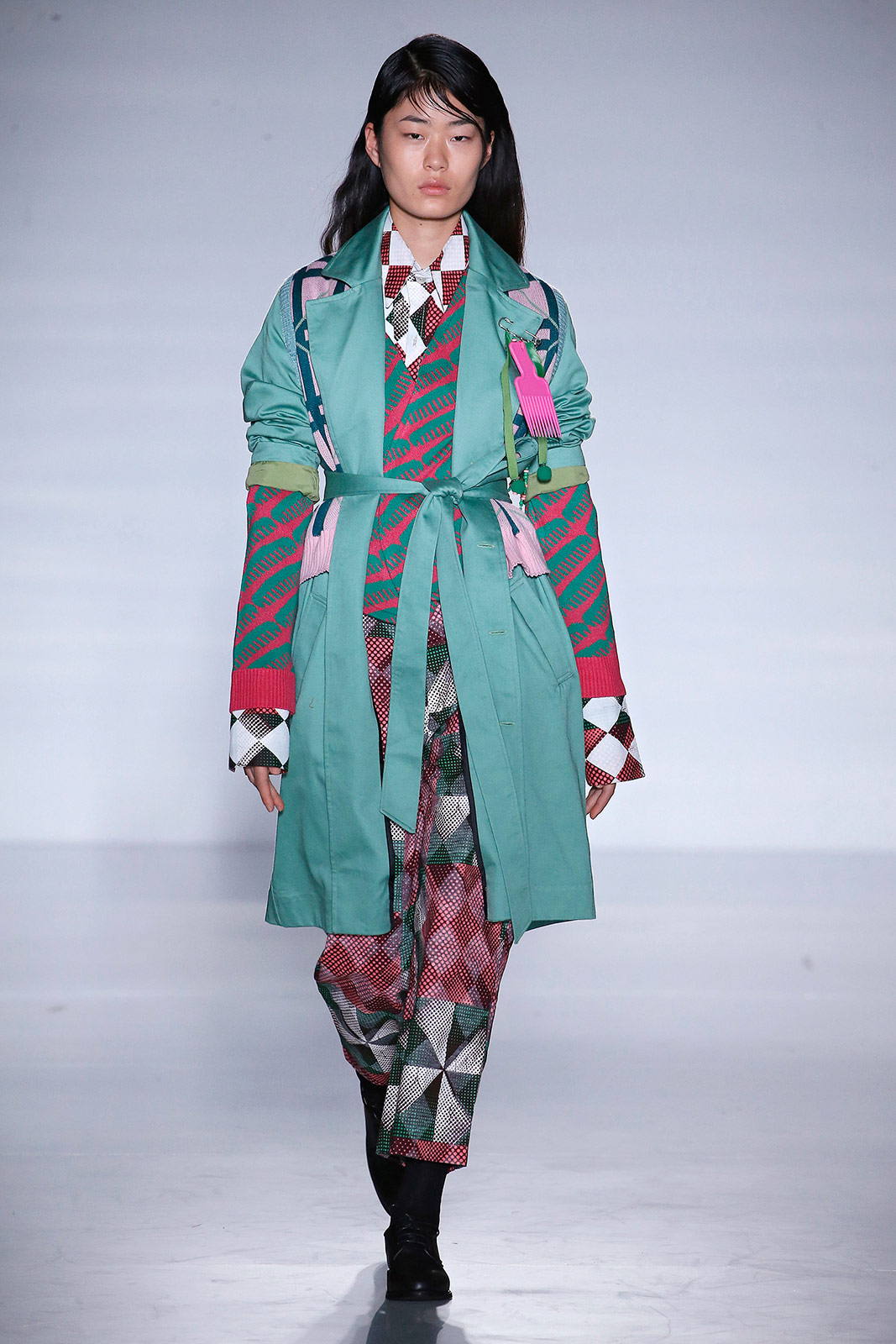 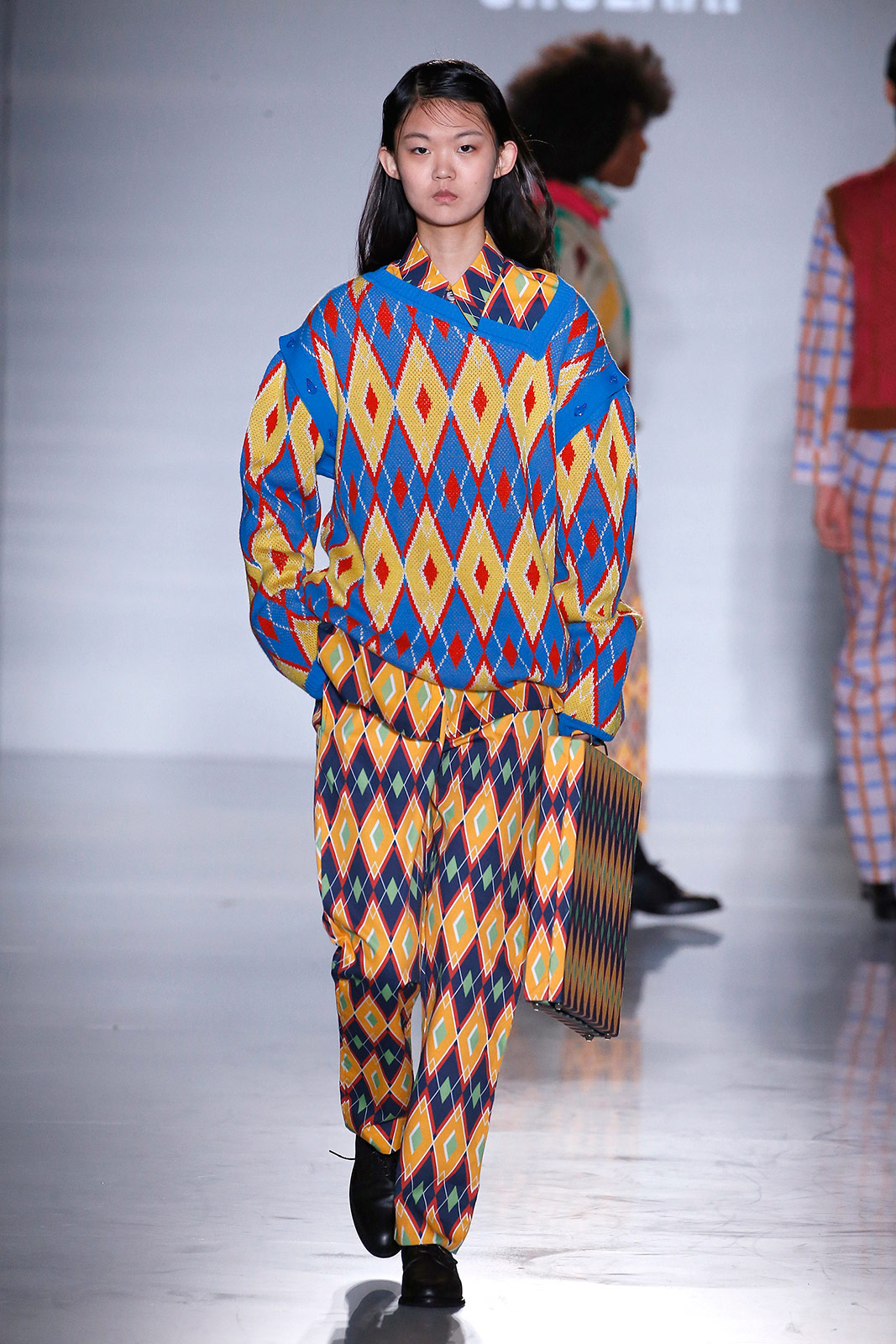 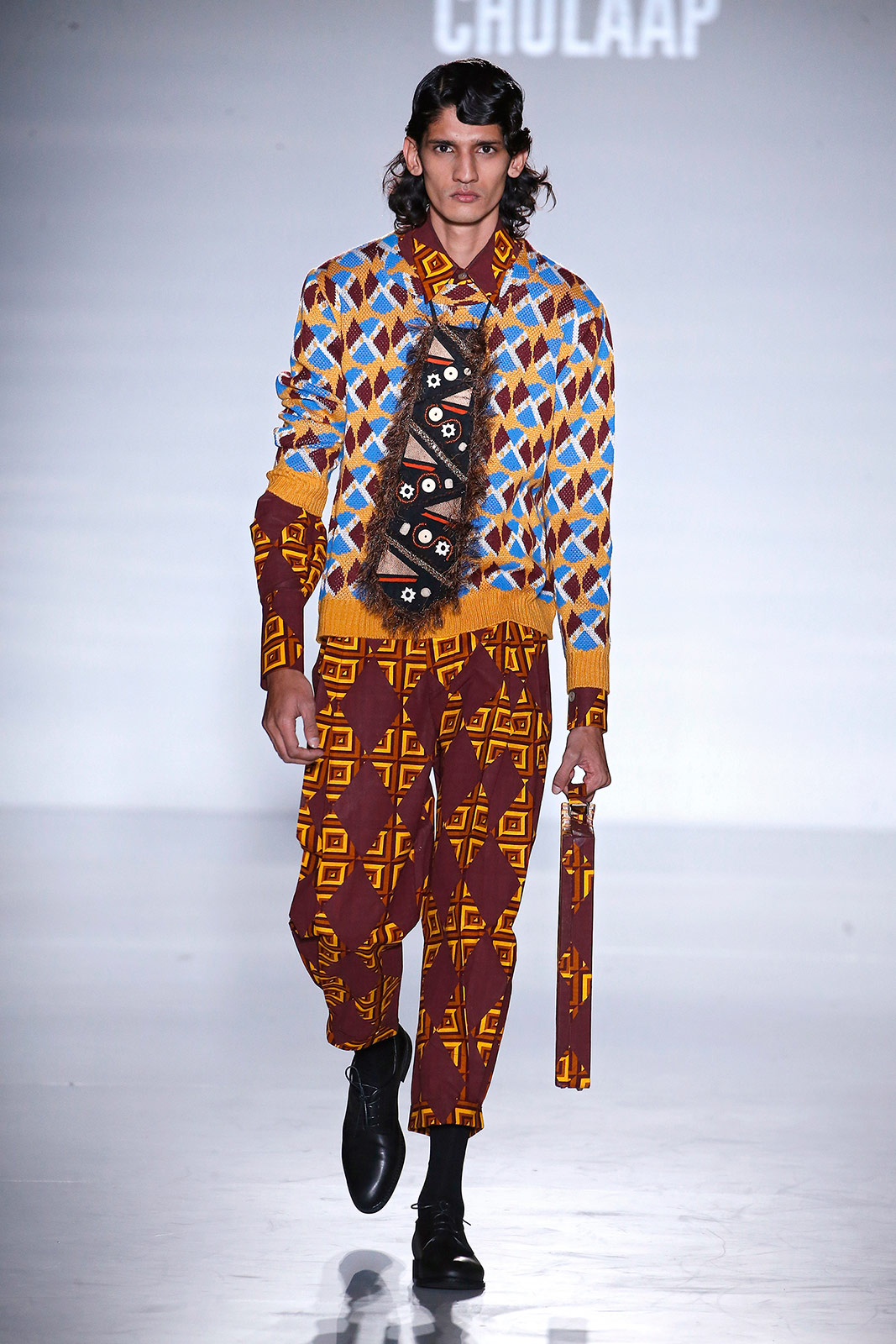 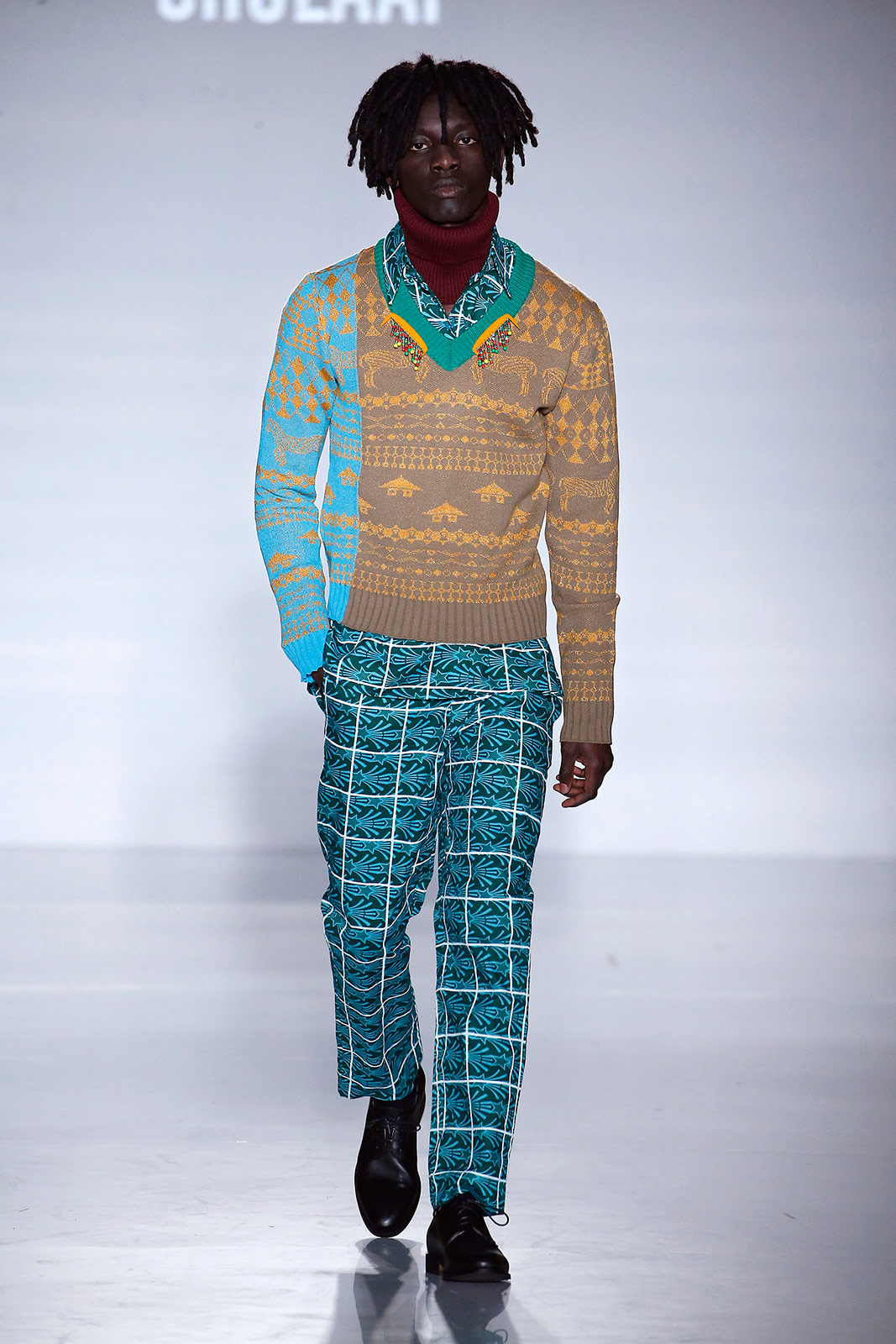 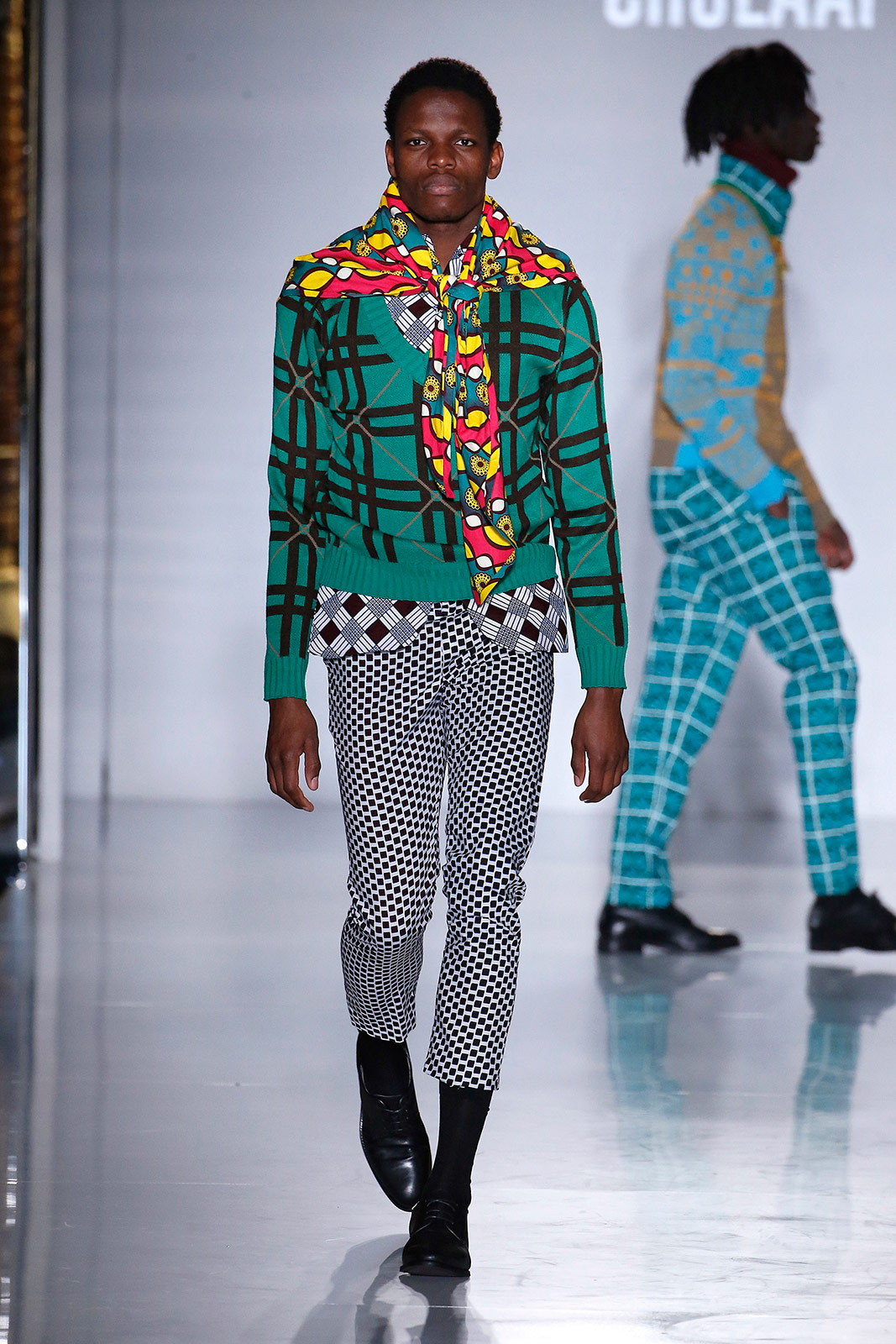 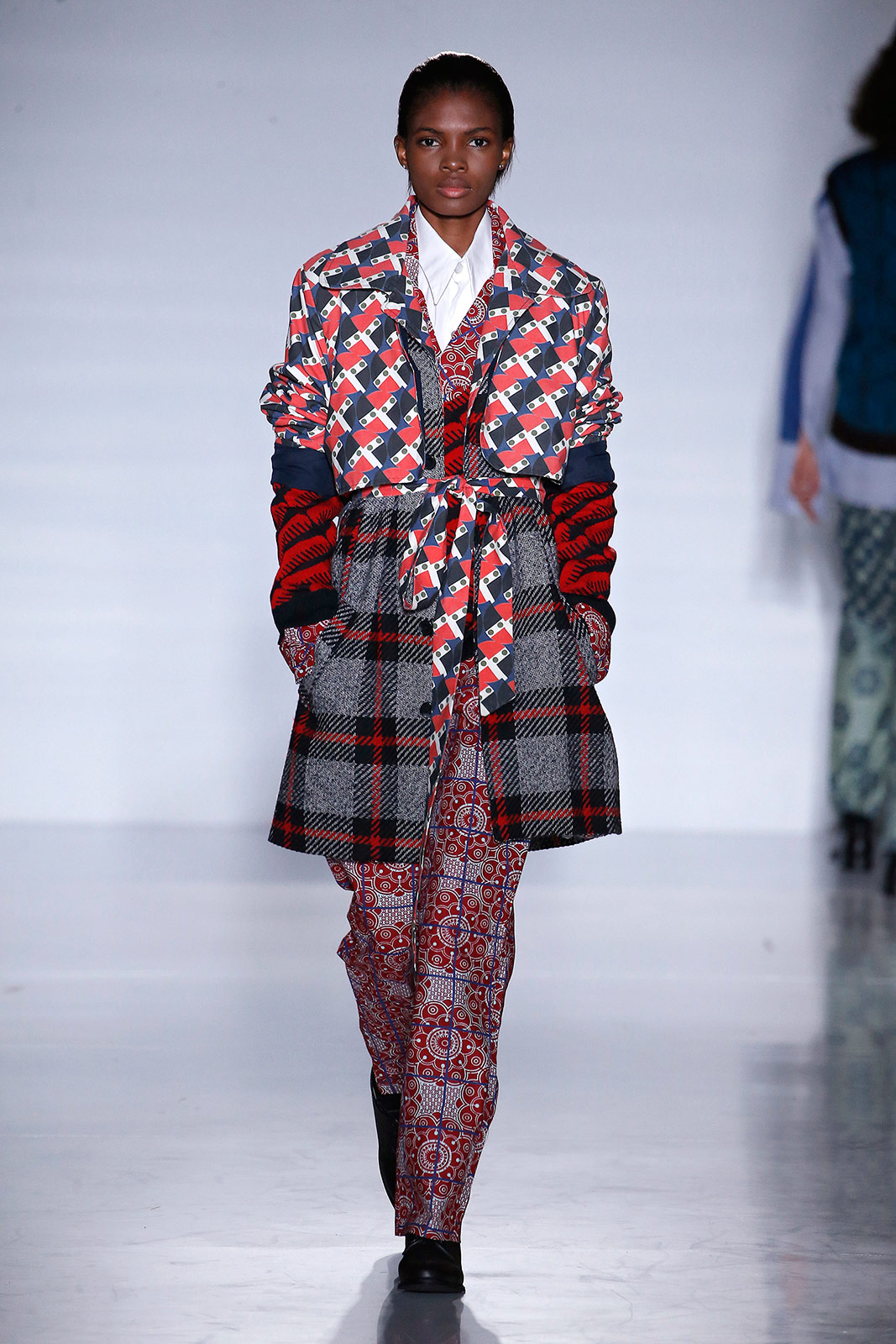 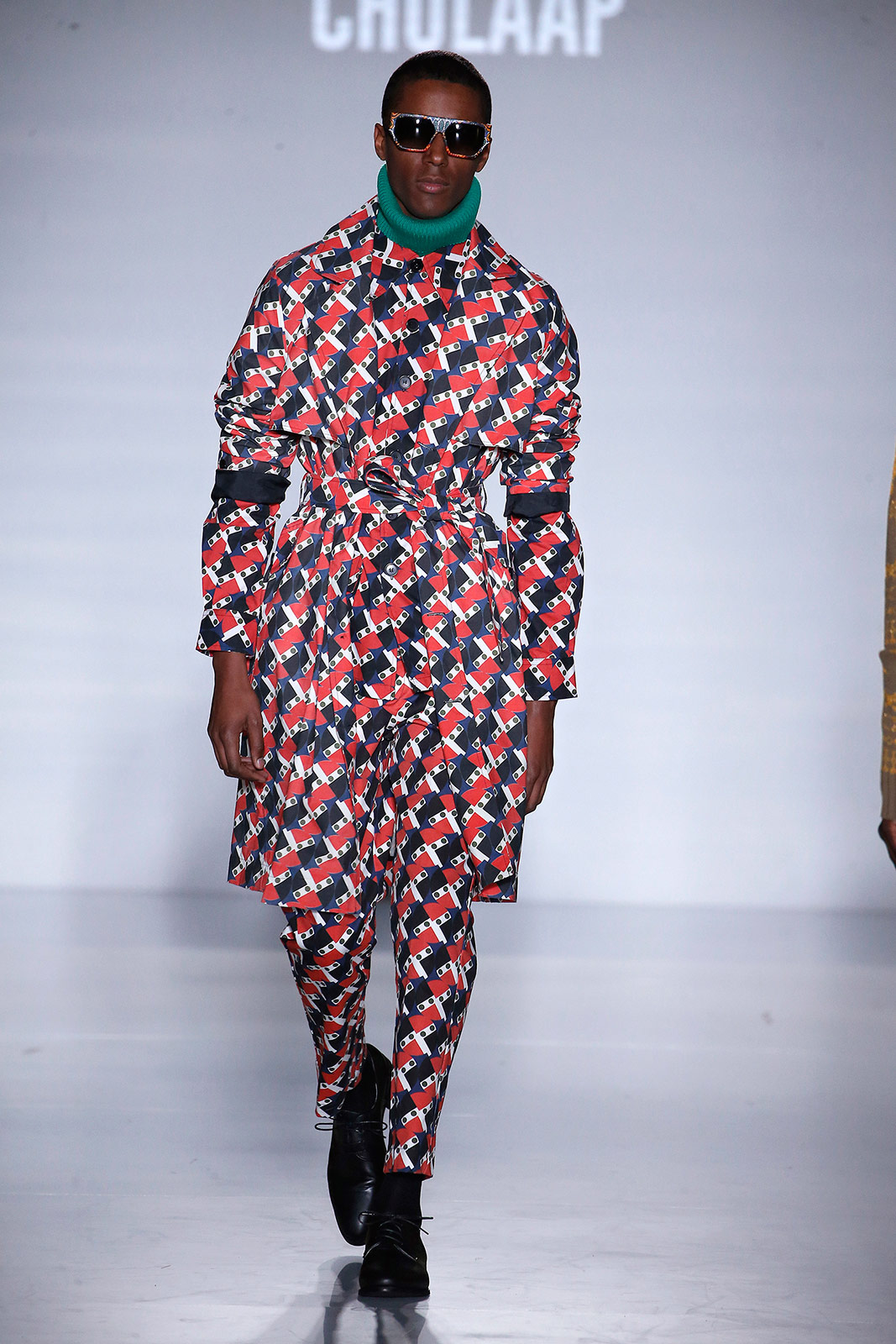 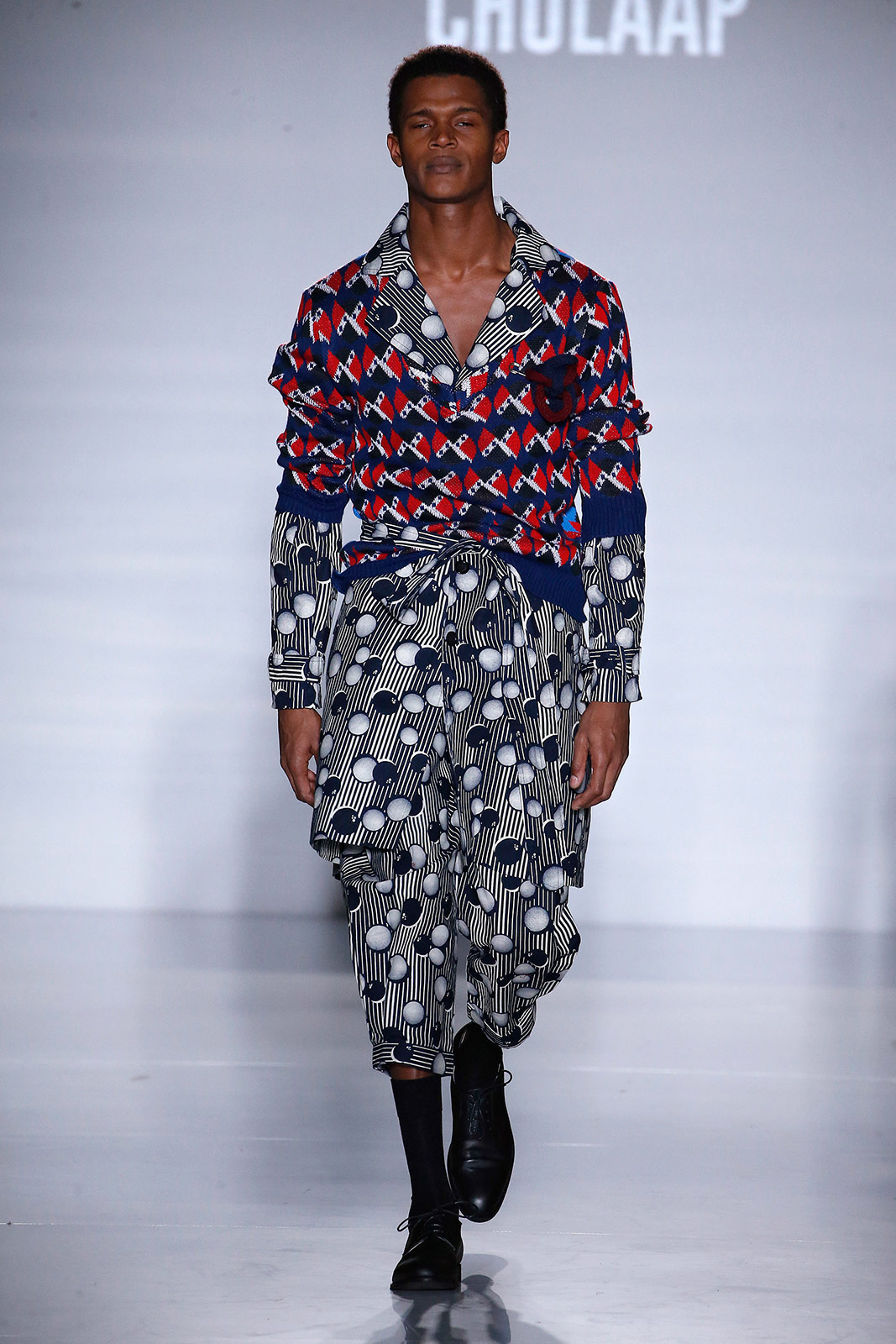 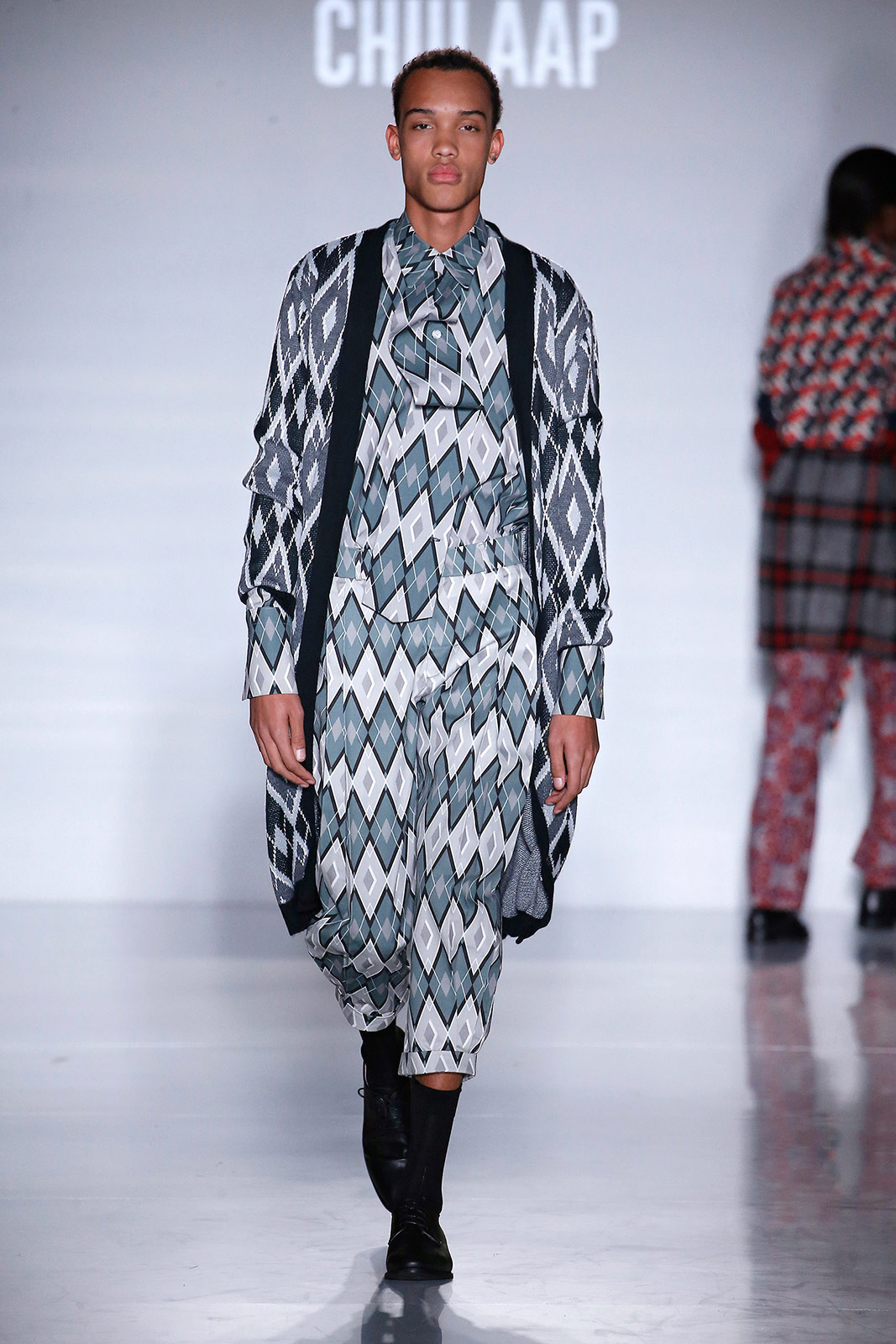 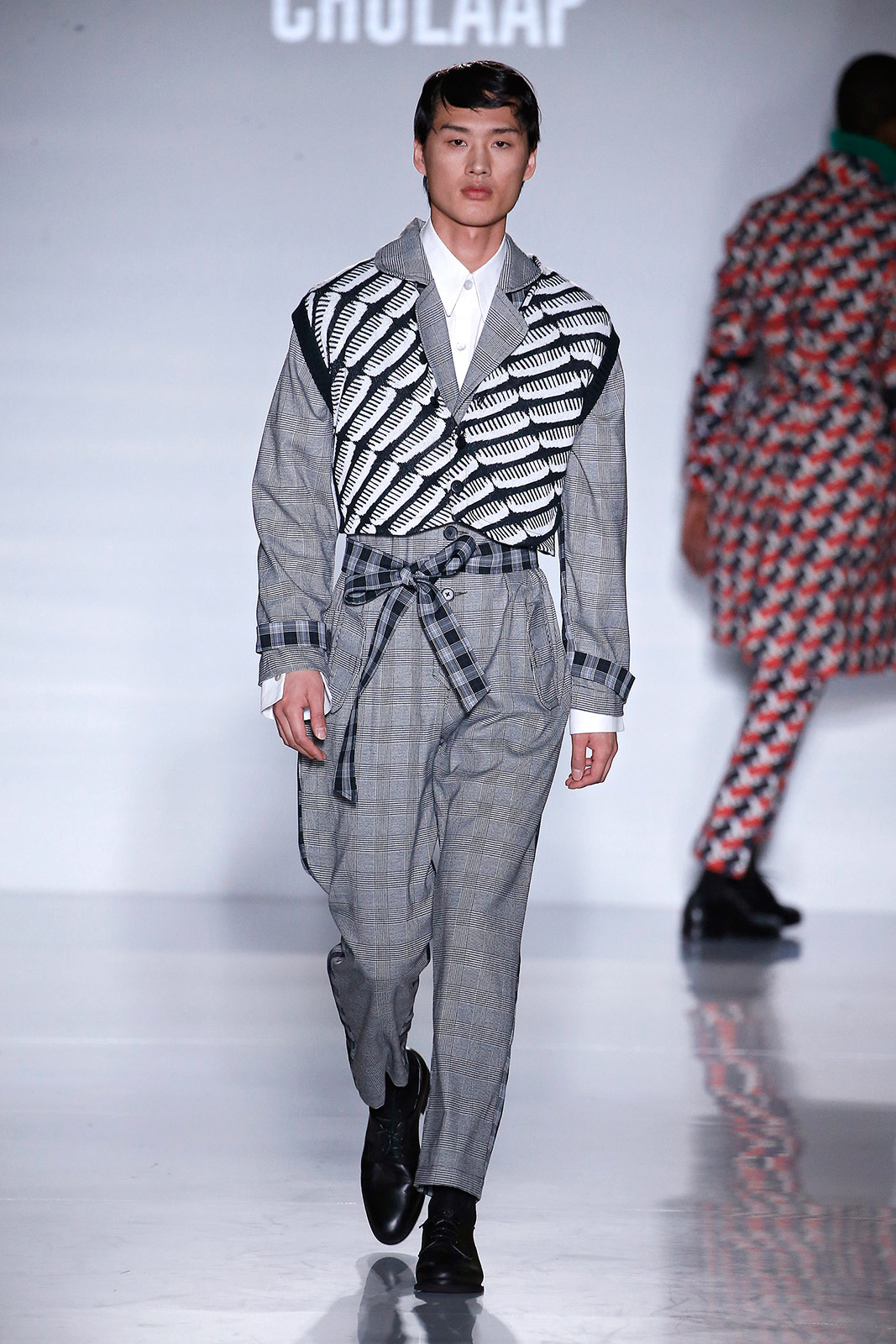