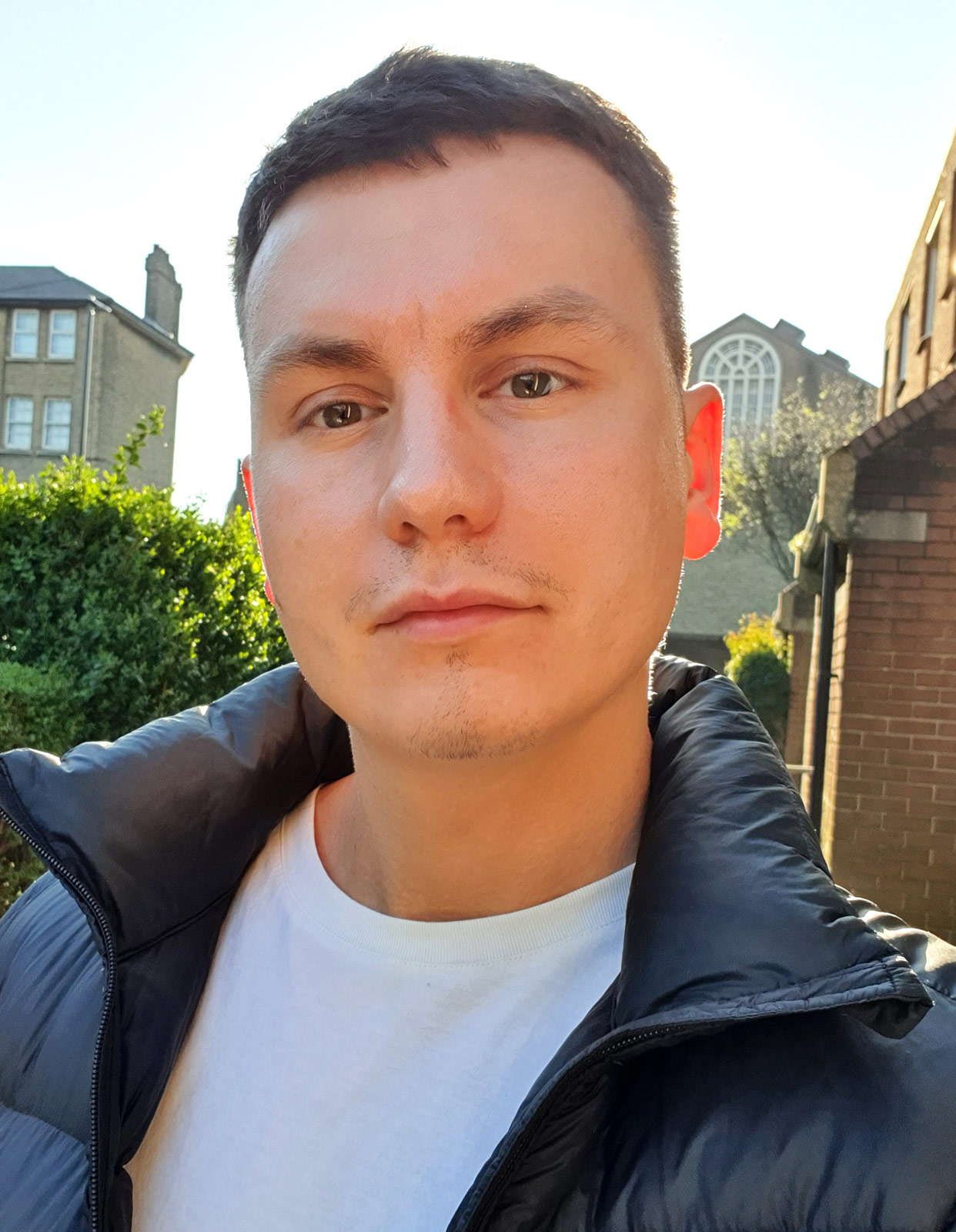 As far as he can remember, Christopher Hartmann has always been drawing and painting. “It sounds like the typical cliché, but it’s always been a natural thing to do. My mother used to draw too, so that might have influenced me. During my teenage years, I went to art classes after school, and with time my interest in art grew so that when I finished high school, I decided to move to Barcelona to study Fine Art.”
Having both the German and Costa-Rican nationalities, he says Barcelona felt like the right ‘middle-point’ at that time. Christopher grew up in quite conservative surroundings in Southern Germany, so he confesses that his initial interest in art might have arisen from a need for self-expression. “After my BA in Fine Art, I felt a bit disoriented and unsure about making art as a profession.”

Eventually, Christopher moved to London to do an MA in Design at Central Saint Martins, where he learnt quite a lot about image-making, something he now applies to his painting practice. “Living in London and experiencing its art scene more closely inspired and motivated me to go back to painting, which is why I decided to do an MFA at Goldsmiths and fully concentrate on art. With the time I got to appreciate art more and more as a way of communication and reflection as opposed to the academic observational drawing I had grown up with.”

Christopher’s work represents a new conception of bodies and their presence in space. Bigger than real bodies, these figures seem to escape from the painting, where emotions and relationships are featured in a contemporary context of emptiness or alienation. “I’ve always been drawn to the human figure, and that is something that has never changed. Even though my work itself is not about me, it contains elements that are deeply personal. I want to talk about themes that are close to me and I have found the best way to communicate them is through painting.”

The way he approaches masculinity is completely opposed to traditional definitions of it, as the figures he paints appear inward facing, caught between hiding and exposing vulnerability, paying special attention to the way he disconnects facial expressions from body shapes and minds. If we add all of these reflections to his innate sense for colour, his artwork turns into a deep explosion of contradictory emotions. “I am interested in the ambiguity of a facial expression or skin touching skin. The figures seem often static, almost paralyzed as a result of dealing with the abundance of (contradictory) emotions. I focus on complex relationships shaped by emotional attachment and detachment, in which a seemingly tender touch speaks of distance and rejection.” 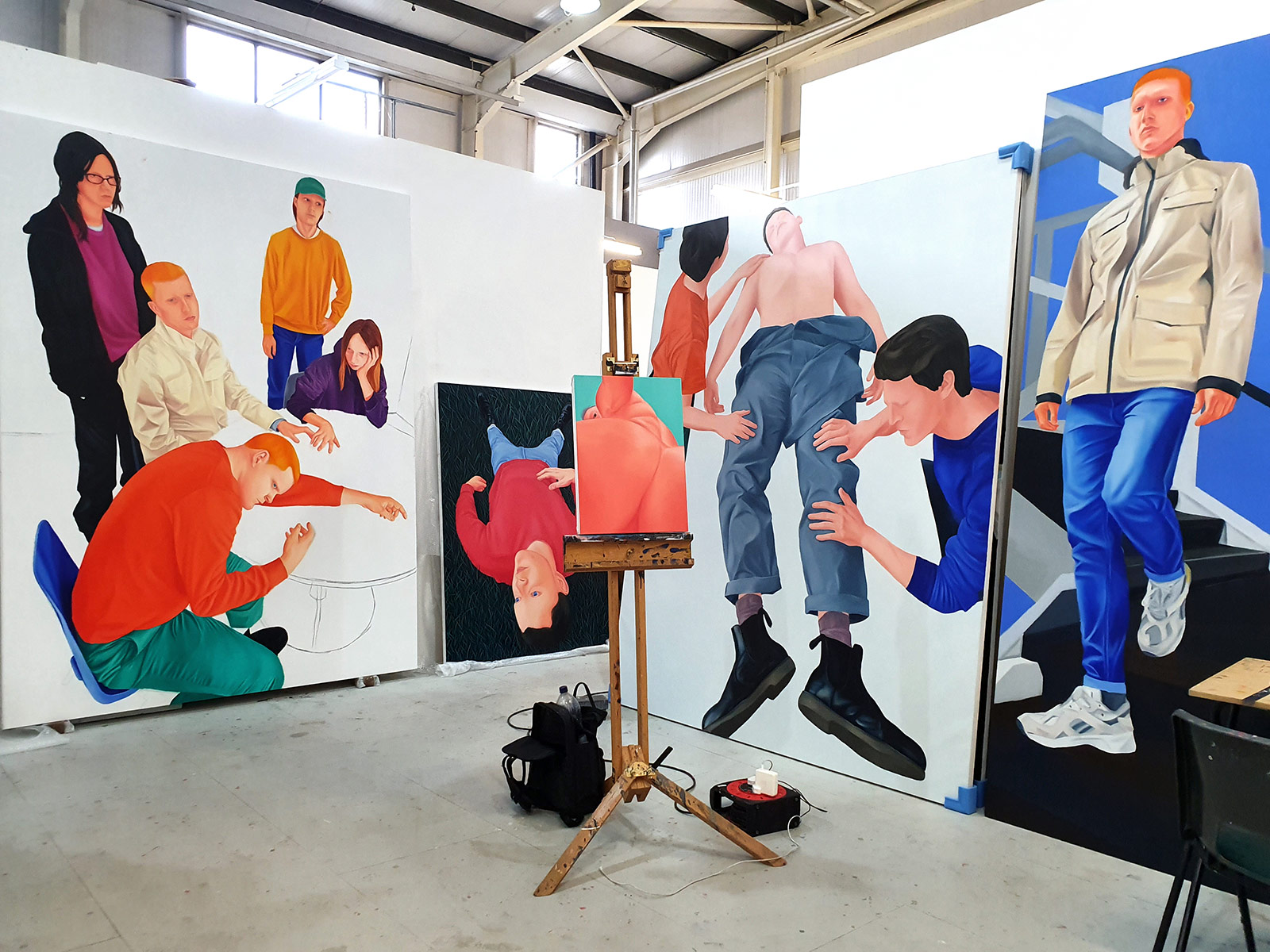 We are in the middle of both: a huge existential and economic crisis. Do you think art can help us uplift our spirit? Or is this some kind of frivolity?
Whether an artwork can be ‘uplifting’ or not really depends on the actual artwork and on how the viewer interprets it. Art can be many things; every artwork works in a different way. Especially during a crisis, many artists are motivated to be much more directly political in their work. People might consider a more poetic artwork to be ‘uplifting’ as experiencing beauty might elicit an uplifting emotional response. I would say, however, that a good artwork is always more than just uplifting. Uplifting almost suggests art as a form of escapism; I don’t think that art is the right place for that.
Large bodies that seem to escape from the spaces they occupy and ambivalent feelings make an explosion in vibrant colours. Is your colour palette a reflection of contemporary life scenes?
My colour palette has been very influenced by the imagery I’m looking at. I’m really into independent fashion editorials, for instance, to find inspiration. I’m very drawn to their compositions, which are often very inspired by art history, their narratives and use of colours. Whenever I have an idea of a composition in my mind, I ask people to pose for me. Once I get the right picture, I start editing it using digital tools to get the right composition and colours.
I start by painting an underlayer so that the second layer appears brighter, inspired by the brightness of the screens I’m constantly looking at. I always work from pictures on a screen. Probably because these digital images belong to a contemporary context, my colour palette is automatically influenced by it. My paintings are not about the digital itself, but my images and subjects are definitely bound to it.
Why do you choose ‘happy colours’ to express sadness, emptiness or even affected indifference?
I don’t consider my colours to be necessarily ‘happy’. When it comes to colours, I’m very drawn to clean, bright, primary tones. I don’t mix many colours together in order not to ‘contaminate’ them. The emptiness or alienation I’m referring to in my paintings definitely belong to a contemporary context, so it makes sense that the colours make reference to that. I don’t think that using brighter hues to talk about these themes is necessarily a contradiction. When I paint grass or a sky, for instance, I tend to oversaturate the colours to an extent that they look a bit artificial and vibrant in order to make very familiar motifs strangely unfamiliar.
These are not necessarily inviting spaces, and the figures therefore often seem alienated or detached from it. So overall, both the colours and the mood of my figures make reference to certain contemporary narratives. The sociologist Eva Illouz, who writes about emotional capitalism and the digital, talks about ‘cold intimacies,’ a term that I think defines many of the relationships I’m trying to visualize. 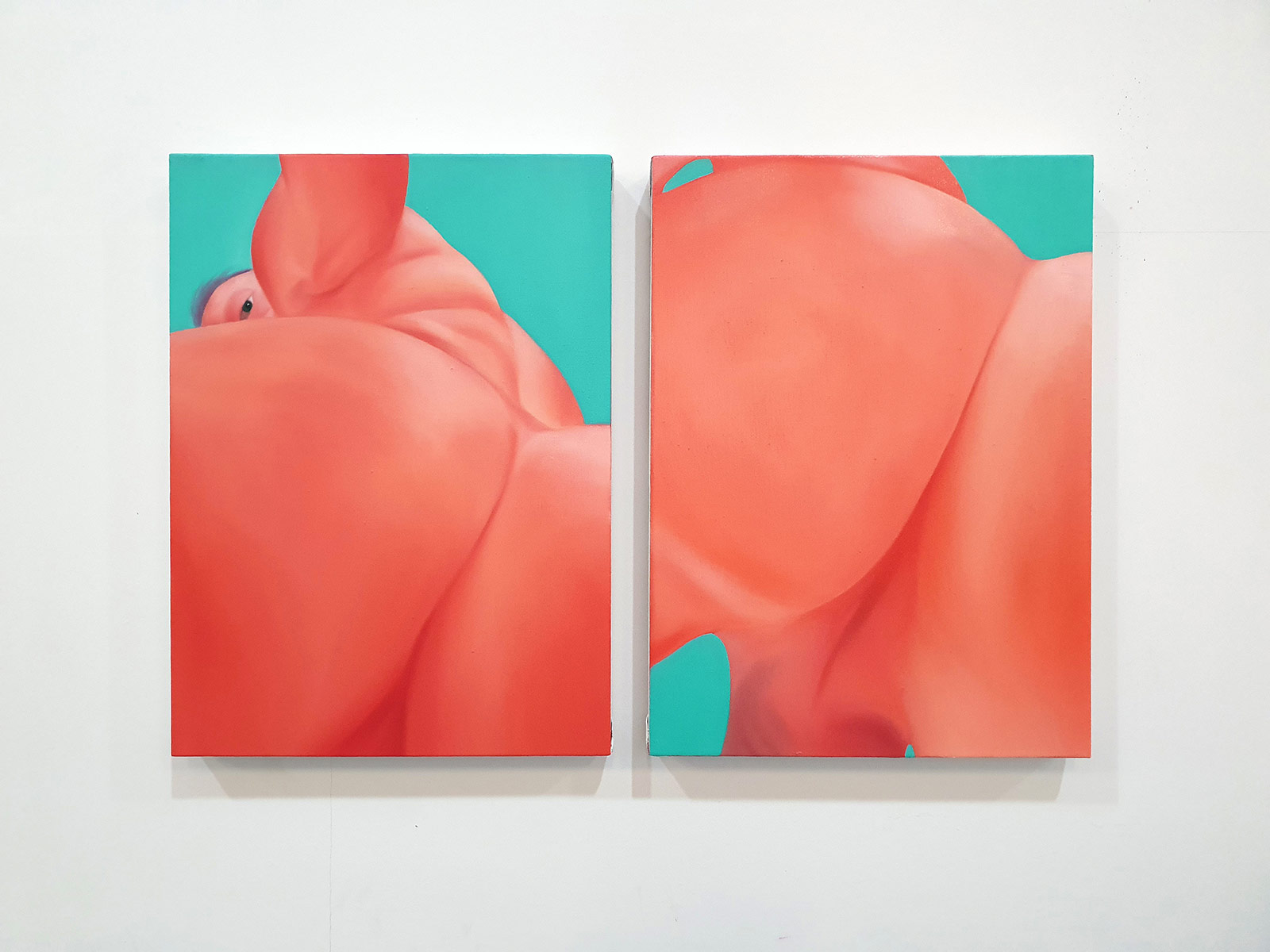 Your paintings are mostly made in oil on linen or canvas. Why do you use this technique applied on these large formats?
I mainly paint large-scale paintings as I’m interested in the relationship between the figures and the viewer in the specific space. I’m very drawn to large formats as I’m interested in the monumentality of the bodies and their heavy presence in the space. For the bodies to appear monumental, I always paint them slightly bigger than life size, which is why I depend on large formats to fit them in. Recognizable as human-like figures, the bodies are too big to be real, which emphasizes the otherness of these figures. I don’t think that a small painting with tiny figures would have the same effect.
You participated in the exhibition Crowd, at Hannah Barry Gallery, where you looked into the themes of modernity and belonging. Are you more interested in people and relationships around you? Or are you more interested in the private aspects of the human being (the private and introspective side)?
I’m interested in both, and I don’t think you can easily separate them. In some paintings the emphasis is on the relationships between several figures; in others, I zoom into more personal, introspective spheres. In my paintings, I tend to focus on moments in which subjects seem unable to truly communicate between one another or externalize their inner feelings to each other. Communication falls short. I’m interested in the gap between what the relationship is and what it appears to be.
We can see no places, no time, only people or parts of the masculine body that are in touch, gently, like A Touch That Is Longing, A Touch That Is Distant. We can see a little bit of melancholy…Why this mood?
In A Touch That Is Longing, A Touch That Is Distant, my intention was to portray two subjects that feel detached from each other and the space. The emphasis of this diptych is the physical but mainly emotional gap between the two figures. Even though it might appear tender at first, there is a clear disconnection between the touch and their gaze emphasizing the emotional distance. There is both a physical and mental boundary between the subjects, when the ‘other’ is not accessible. The reason or motivation behind this diptych in particular is deeply personal, a result of wanting to describe a certain experience for which I have not found the right words. 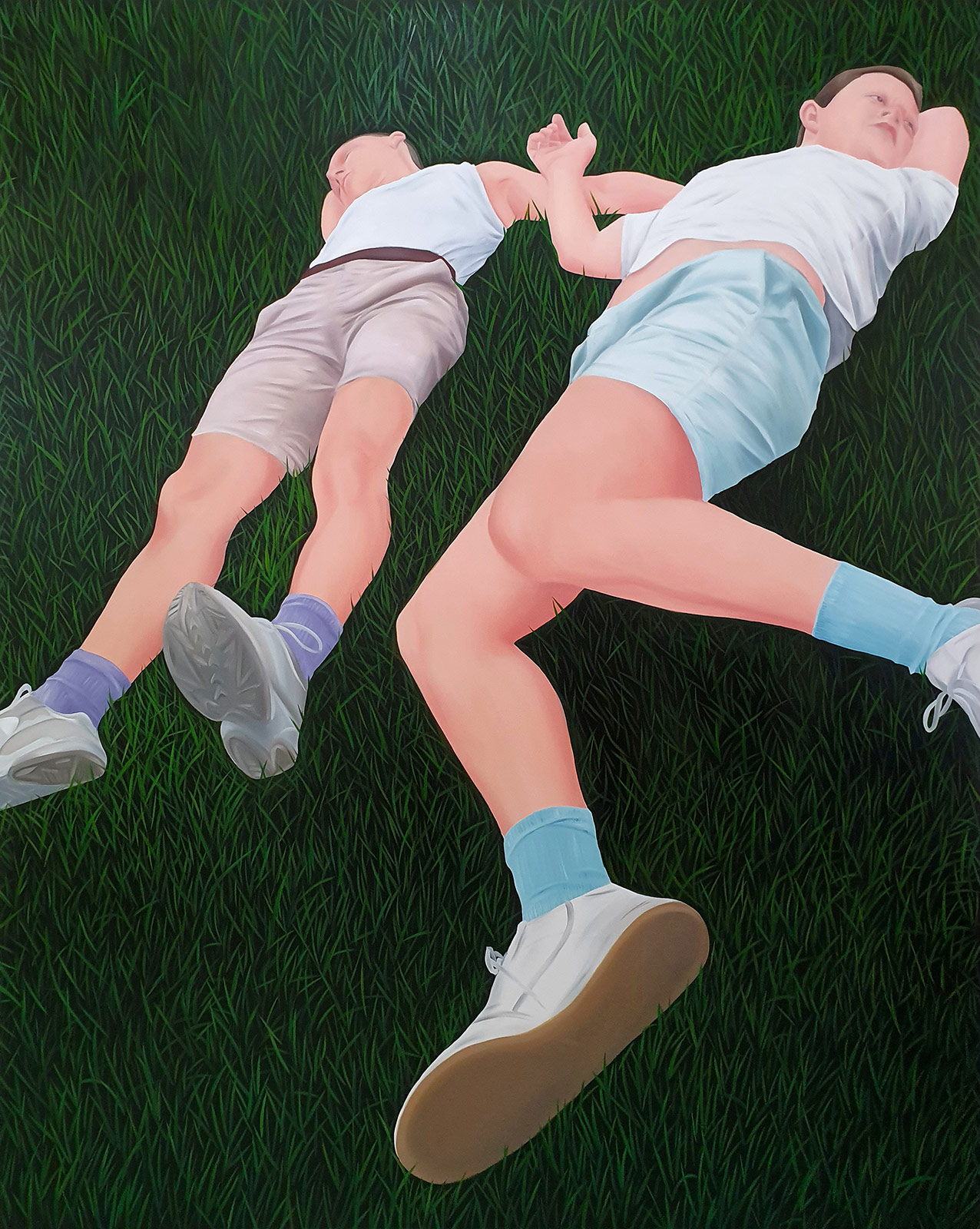 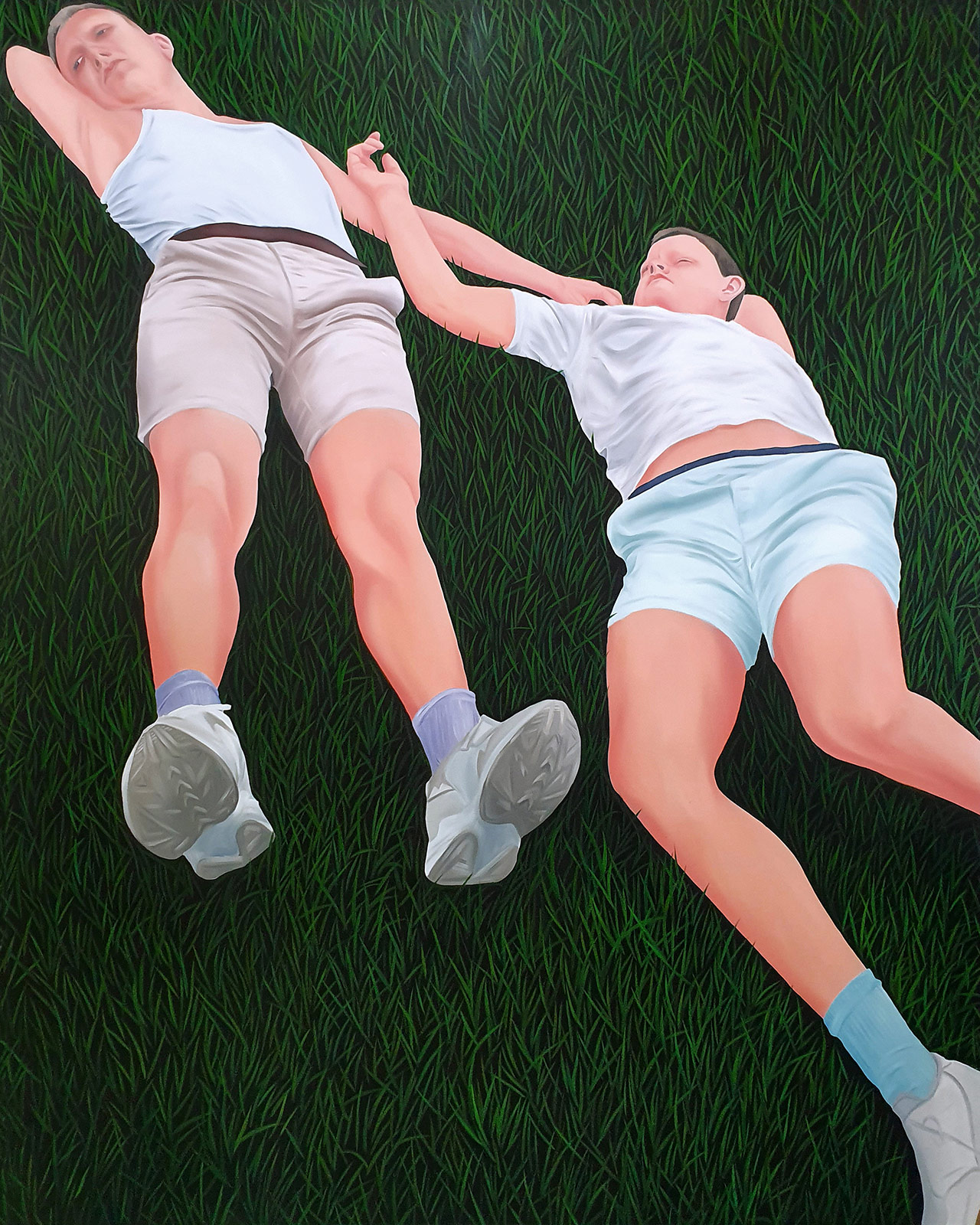 Our traditional notions of masculinity are deconstructed by your approach to the human body, which is soft and elegant in manners but strong in meaning. Is body language an expression of the mind?
During my time at Central Saint Martins, I spent a lot of time making work challenging our notions of masculinity. My final degree show project was a book in which I had interviewed men from different backgrounds about their experiences of vulnerability. I spent a lot of time questioning how especially mainstream culture portrays men and wanted to visually address that. As opposed to traditional definitions of masculinity, the figures in my paintings appear inward facing, caught between hiding and exposing vulnerability.
I think there is often a disconnection between what you might feel in your mind but are willing to reveal through your body language. In my paintings, I often address that disconnection. I am interested in the ambiguity of a facial expression or skin touching skin. The figures seem often static, almost paralyzed as a result of dealing with the abundance of (contradictory) emotions. I focus on complex relationships shaped by emotional attachment and detachment, in which a seemingly tender touch speaks of distance and rejection.
We can see very realistic representations and a touch of quietness that remind us somehow to the self-isolated souls of Edward Hopper. Have you been influenced by any other artist or are you interested in any artistic movement?
I suppose Hopper had some impact on me as the way he abstracts the human figure influenced my first attempts to stray from the stiff academic tradition of my early education. His paintings remind me a bit of Tim Eitel’s work as he transmits a similar mood in his work.
I’m not really interested in entire artistic movements but specific artists. To find inspiration, I love looking at photography. I’m a big fan of Wolfgang Tillmans for example. I’ve been lately looking a lot at paintings by Bronzino and Pontormo. I’m really into the use of colours (especially Pontormo) and the way they both paint fabrics. I’ve always been a fan of paintings by Muntean & Rosenblum. A filmmaker I really like is Michelangelo Antonioni. I love looking at film stills (I probably prefer them to the movies themselves) that remind me of Eitel or Hopper. I’m also into Ed Atkin’s work, especially the way he emphasizes the otherness of his subjects. I also take a lot of inspiration from books, a current favourite being Bluets, by Maggie Nelson.
In these times we are living, how are you focusing your career? Are you working on any exhibition?
Because of Covid-19, many of my plans have completely changed. Before the lockdown, I had been working towards the degree show of the MFA at Goldsmiths, which now has been postponed. I decided to defer to next year, which means I will be working towards the degree show in July 2021. During June/July I participate in two online exhibitions, one at UnitLondon and another organised by Showhouse JayJay. I’m going to have a solo show at PetervonKant Gallery, which opens at the end of July 2020. The show consists of paintings I have made during the lockdown. That being said, it is quite hard to plan anything due to the current circumstances, especially with a potential second wave of the virus… Since I cannot control any of it (apart from staying at home), I will keep painting and see what happens 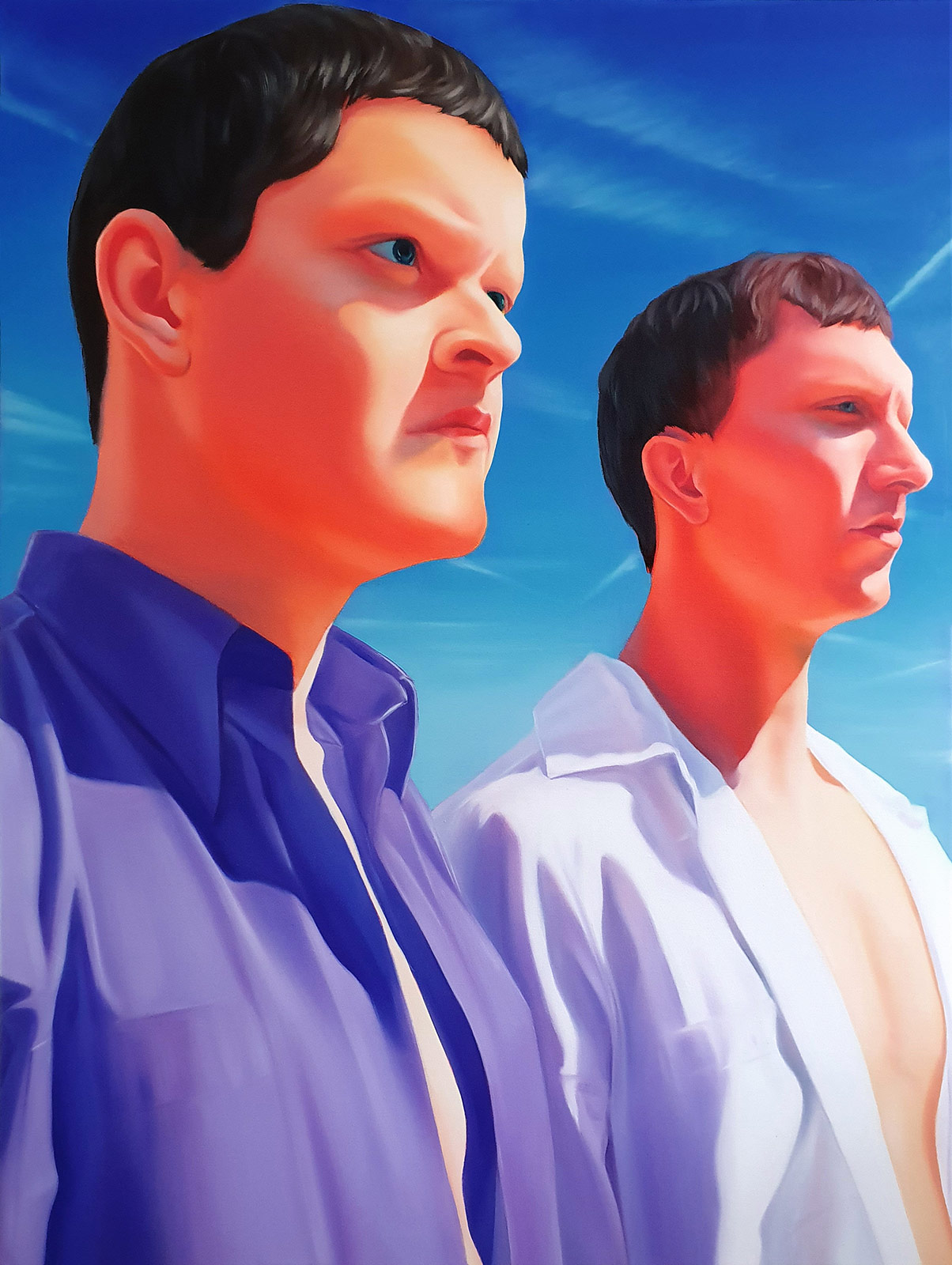 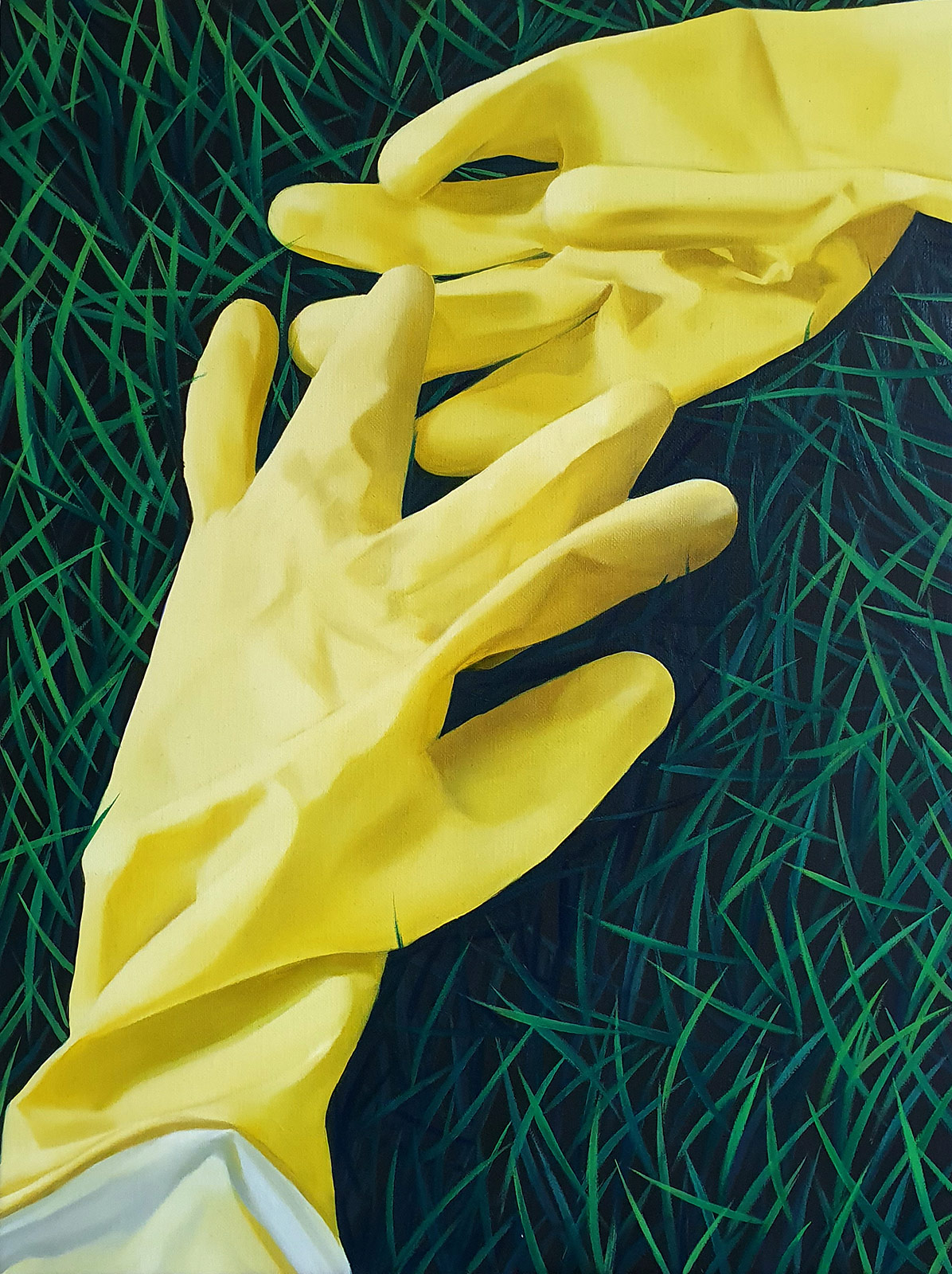 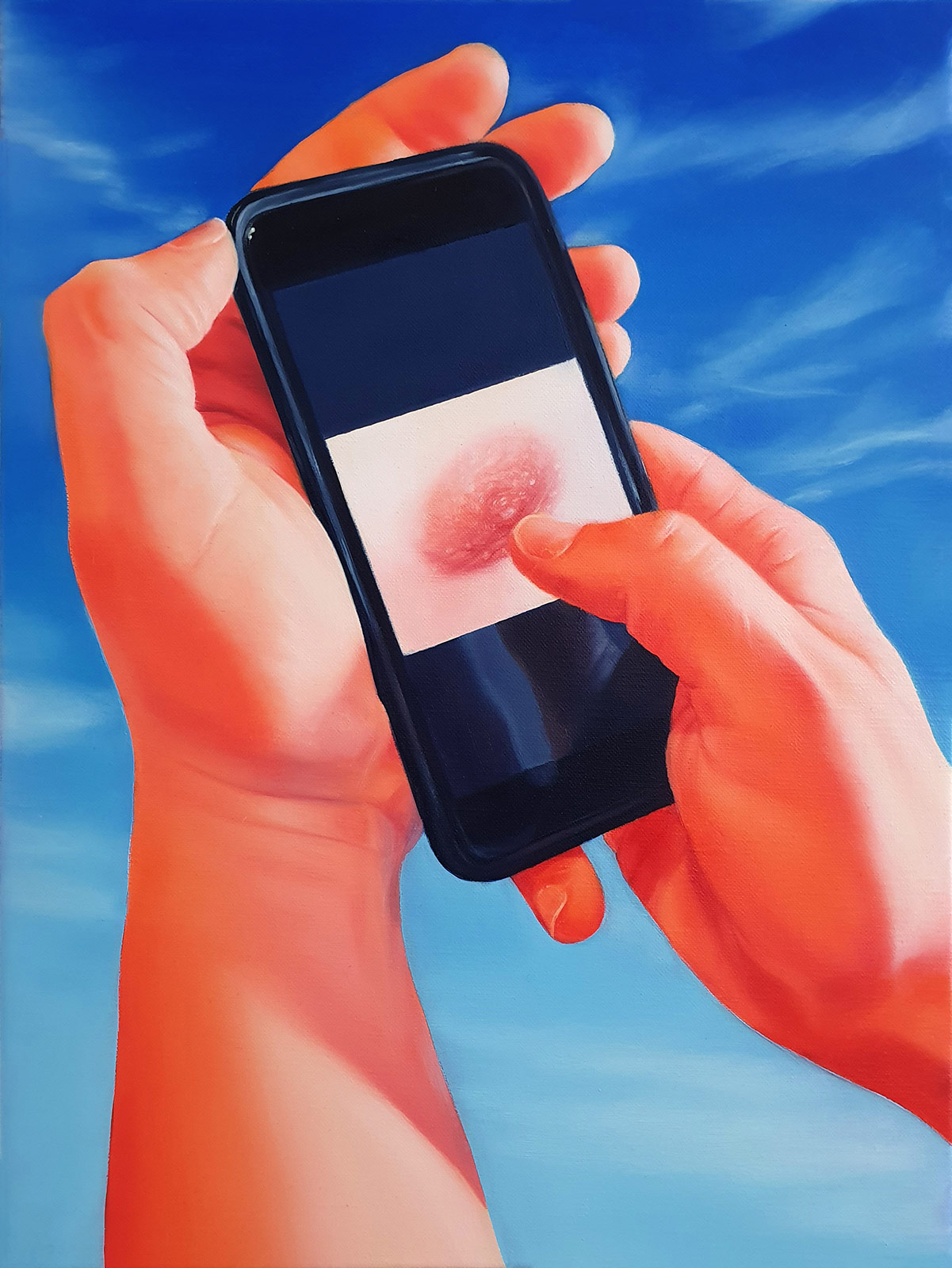 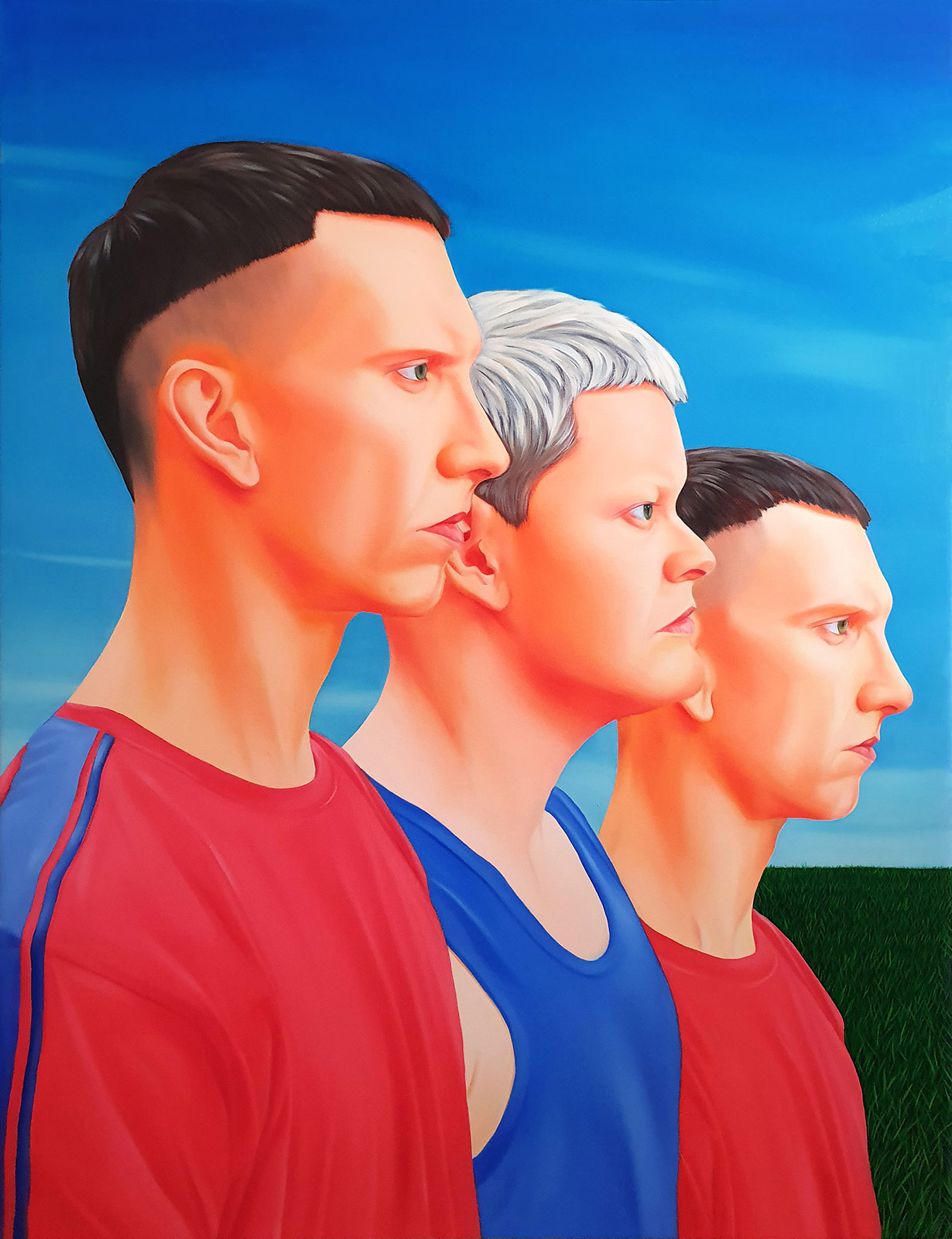 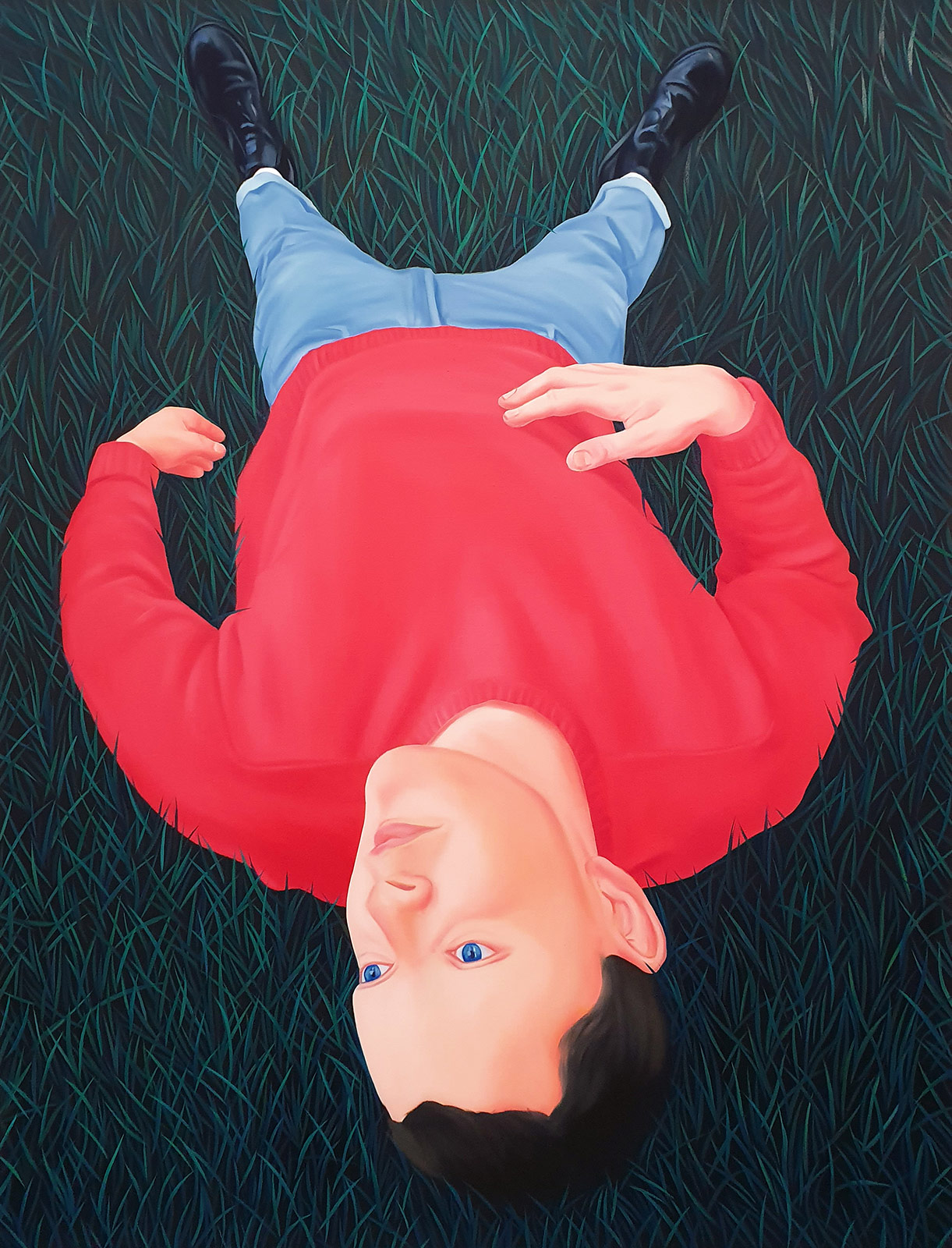