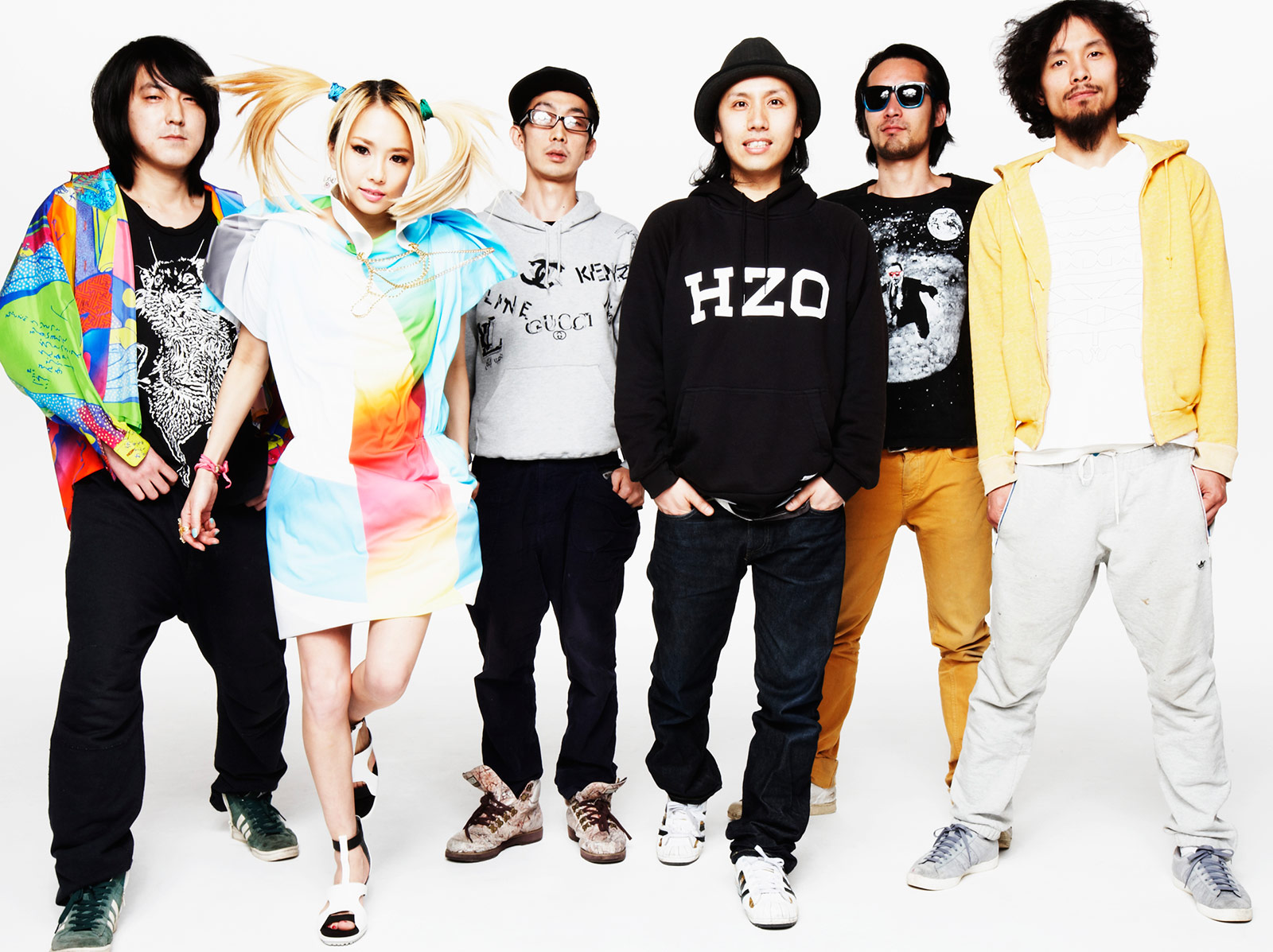 If Japan ever wanted to be rebellious, it proudly thought of Chim Pom and realised it already was. Ellie, Ryuta Ushiro, Yasutaka Hayashi, Masataka Okada, Toshinori Mizuno, and Motomu Inaoka are one collective of artists that speaks in unison about the contemporary reality, about the everyday problems that no one wants to deeply think about. From political to social concerns, they have no fear, they know no boundaries and because they once dared, they’ve reached the art status. Since 2005 they are together and now, more than ten years later, they’ve already managed to create something that will survive any life time, something which no wind could destroy and that no one could remain indifferent to.

Do you consider yourselves activists, or even prank artists? Does the Neo-Dadaist concept suit you?

If our pieces were to have some sort of provocative meaning for society, that would possess the character of activism. And if they were to be effective ways to inspire people, we would be prank artists too. The method and theory of Neo-Dadaism was very effective back in the day, in our opinion. We always make our pieces with effective methods for current society and modern times.

Chim Pom derives from a slang term for penis. Why this name and who came up with the idea?

It was Ellie’s idea. At first, Ellie had proposed this name as a refined and innovative image, so the other members tried not to think that it was slang for penis. However, people who hear this name for the first time get confused, because it really sounds like that (laughs).
The more it’s in a serious place, such as an art museum or art school, the more we try to say our name so it doesn’t sound like that. That means people are already enchanted by us before seeing our work.

Would it be possible to think about Chim Pom without Tokyo city as first scenery?

It’s important and necessary for us that we formed in Tokyo, and impossible to think about Chim Pom as an artist without Tokyo. However, there are several contexts for each work, so we feel Tokyo is not especially important in terms of each art piece.

How did the six of you become one collective in your twenties?

We started to make video works as soon as we found each other. The more we found our certain original expression, the more our six members, who have different personalities, got together.

We don’t have anything special to achieve, and we don’t think people are not reacting to their reality. That said, we want to keep reacting to the reality that’s happening around us in our own way. The problems around us are the problems going on all over the world, if you think about it deeply. We would like to propose various and totally different points of view in reality with some humour at times.

Have you ever felt afraid? Did the idea of going to jail cross your minds in any moment?

There are some dangers when making artworks outside, for sure. That’s why we all study the law and dangers before making the actions. But we have to dare to complete a work on every occasion. So our answer to this question is yes.

Which has been the hardest project so far?

TPA, which was made while staying in Indonesia. There is an object of public concern about a vast field of piles of garbage because the government can’t deal with the large amount (of garbage) consequence of the economic development. We lived near this field, in Bali, and made this work by building a relationship with local people who make a living out of picking plastic bags and plastic products there. In the end, we exhibited a movie in which Ellie headed to the garbage mountains, which is just behind of a luxury tourist area, in a tourist helicopter and she threw away a plastic bag from the helicopter onto the garbage mountains, then the other members, who were on the mountain, collected it with the locals who live around there. Also, we exhibited an installation of the many plastic bags collected by locals and bought by Chim Pom.
The hardest thing was to make the installation at site. It wasn’t nice to exhibit because of the smell stuck to all those plastic bags we bought thickly. So we spent two days spreading them in a square next to the venue, and washing all those bags with soup with our own hands. But then those plastic bags we washed were too clean to use at the installation. Then we made all of them dirty for half a day, and finally we could install the work. And of course it was also a difficult issue to fly above the garbage mountains by helicopter. The Bali government doesn’t want to let people know about the mountains and also the sky above it is controlled by their military. However, the problem was solved by Ellie’s words “I have a dream” when we negotiated with a helicopter cruise company. 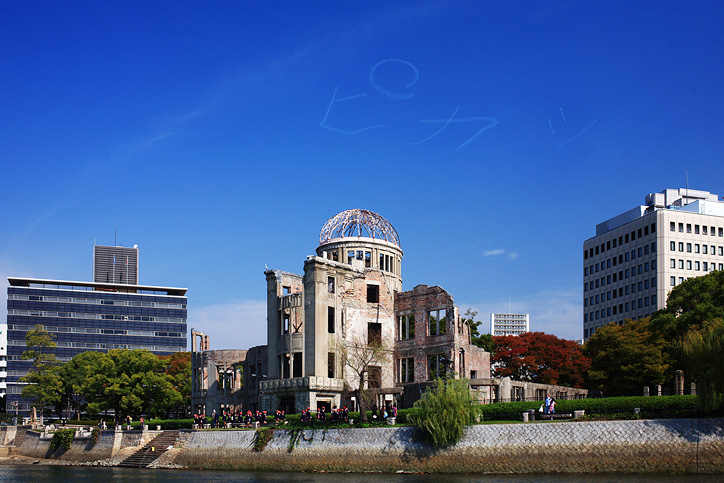 Making the sky of Hiroshima “PIKA!”, 2009 Photo : Cactus Nakao © Chim↑Pom - Courtesy of the artist and MUJIN-TO Production, Tokyo
This one is for Ellie. How does it feel to be the only girl in this collective?

My role is to take their thoughts to an area they won’t reach by themselves. I’m the only member in different surroundings, even though in the same world. In other words, I take the advantage of my point of view as a woman. In the same way, they propose me thoughts that I don’t reach to think. What makes Chim Pom’s work original is the merging of my genius brain and their brain. How do I feel about it? They are hot!

I know that you often gather once a week. Could you describe how these meetings are?

“Don’t Follow the Wind” is a project of its own. Tell us a little bit more about this uncertain exhibition and the invisible website.

Ongoing international exhibition Don’t Follow the Wind is taking place inside the restricted Fukushima Exclusion Zone, the radioactive evacuated area surrounding the Daiichi Nuclear Power – owned by TEPCO. The 12 participating artists’ new projects are exhibiting at four sites that are homes and structures donated by former residents inside the uninhabited radioactive area in Fukushima. This exhibition will be ongoing but is largely invisible as it is taking place inside the restricted Fukushima Exclusion Zone, where radiation levels are still high. Therefore, there is no clear timeline for public access to the sites. It’s only to be viewed in the future, if and when it becomes safe once again for the residents to return.
Perhaps three years, ten years, or decades. Until then, those works are going to be exhibited in silence. For example, Ai Weiwei’s project is to keep a house lighting for two hours every night with solar panels in a town where there’s completely darkness. It looks as if people still lived in an uninhabited town. Meiro Koizumi also uses some solar panels and keeps playing the voices of former residents in a house with headphones that he’s installed. What Chim Pom did for this project will be a secret until people can go in again.

You are aware of the fact that some people might not understand some of your work, that has a deadly serious message. If you had the chance to explain to them, in one word, what you are about, what would you say?

Old days tend to be idealised. However, it doesn’t mean all people today are clever, and neither that there were damn fools in the ancient time. As you know, art pieces change their own meanings as time goes by. Therefore, it’s impossible to know about Chim Pom’s works in terms of today’s opinions and thoughts. It’s not just a beautiful thing, it’s also connected with all the times. So it doesn’t matter to us that you understand our works or not. Because we don’t trust complimentary nor negative opinions. If we explain ourselves in one sentece, that would be: “We are Chim Pom!’’

What is freedom for Chim Pom?

How does it feel when you see someone walking in the street wearing one of your T-shirts?

Of course we are happy to see that, but a little bit embarrassed too. We all are shy, actually. 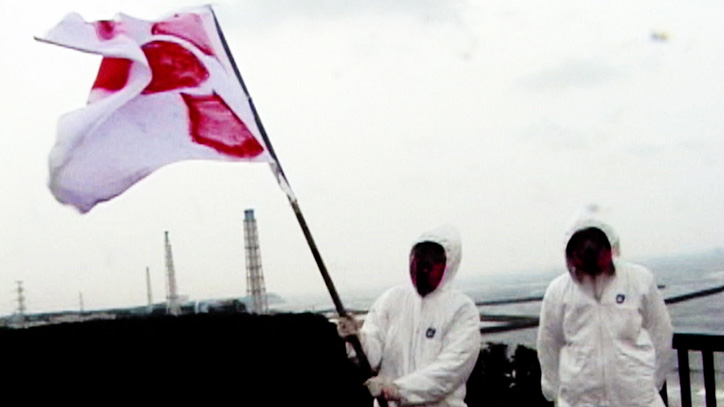 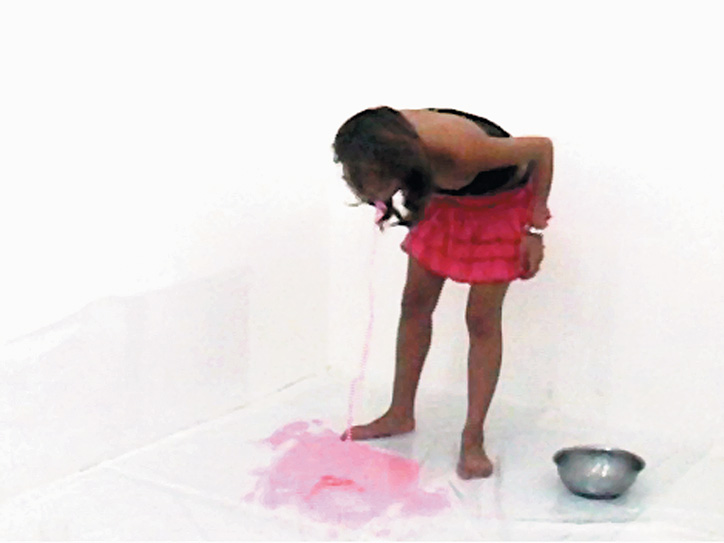 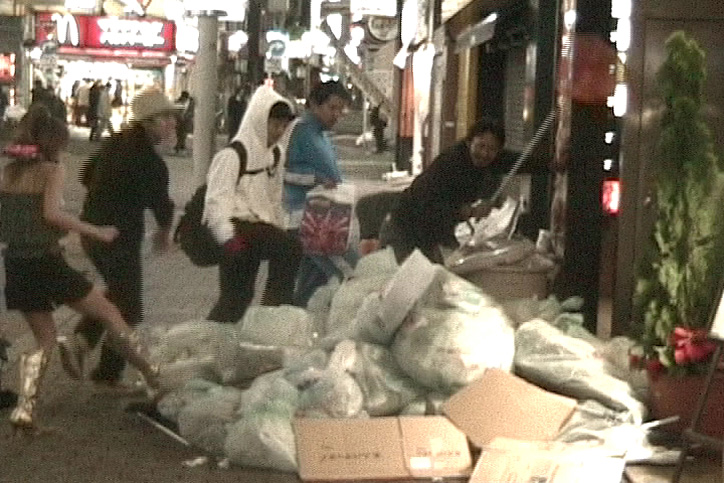 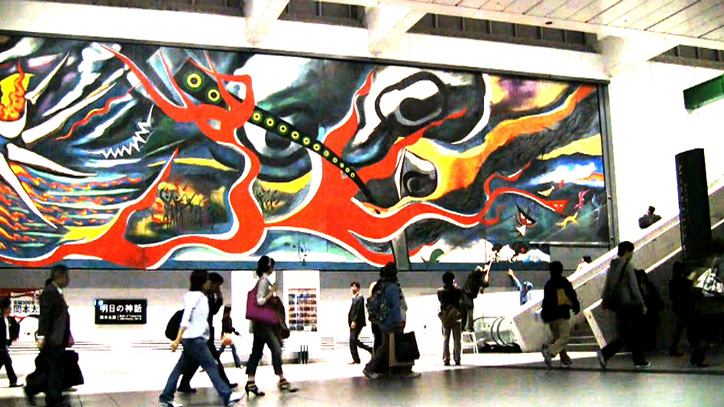 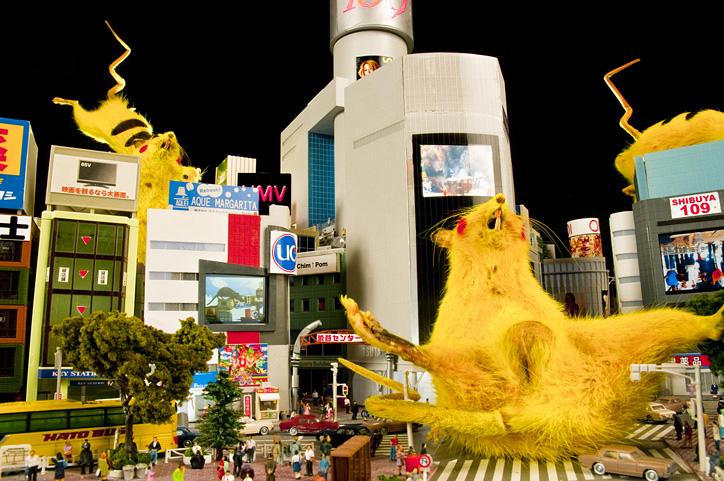 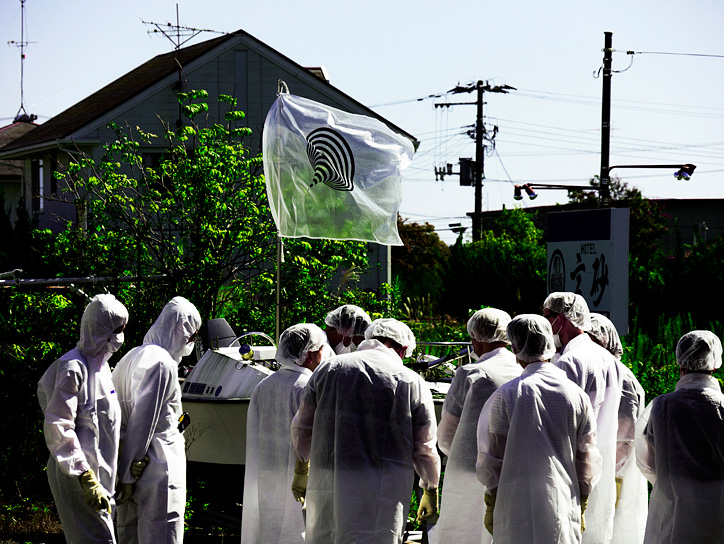 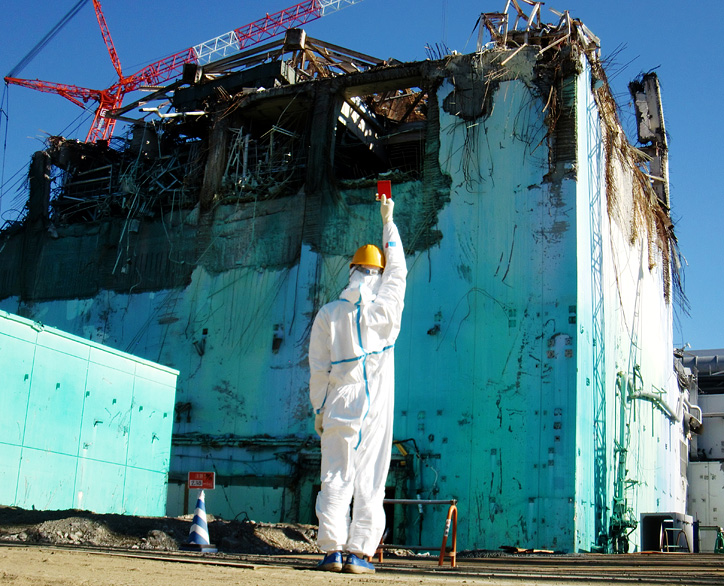 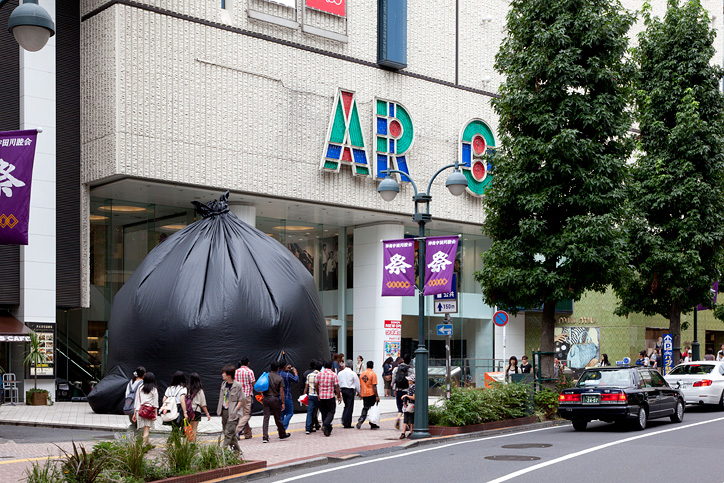 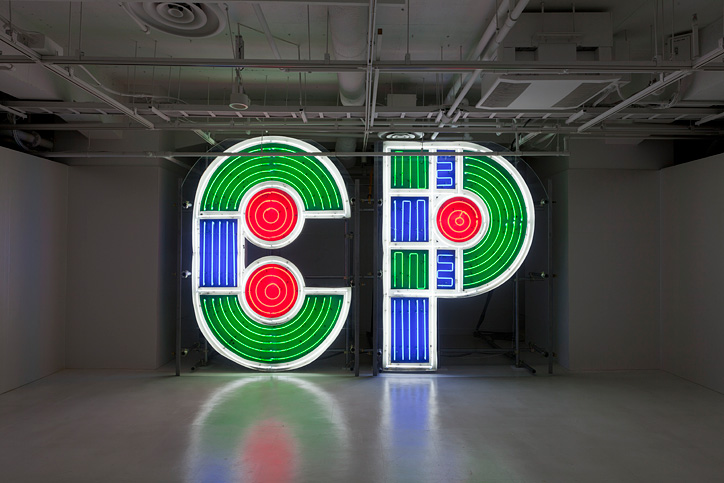