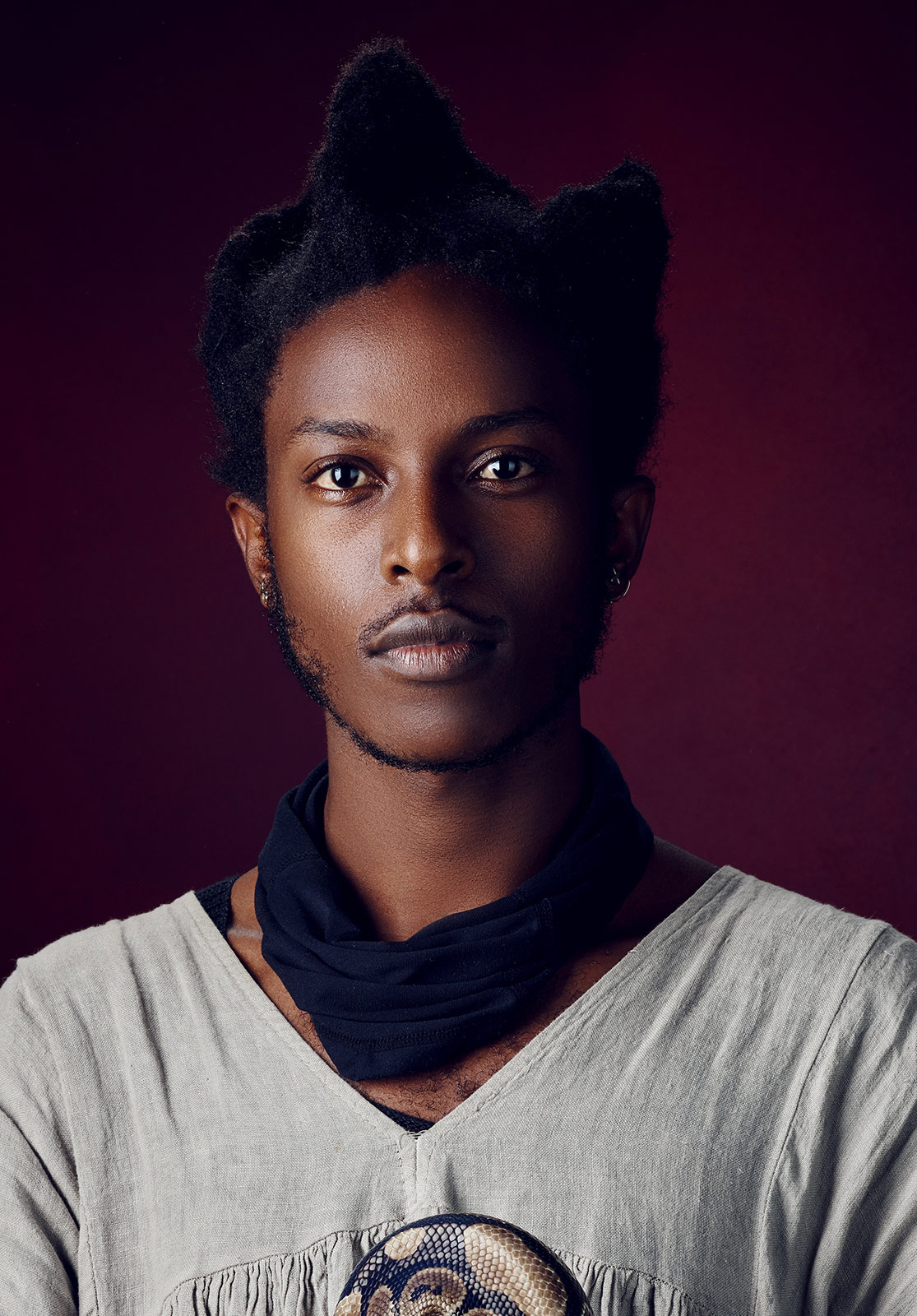 Clothes have various purposes. The primary usage we can surely mention is to cover one’s body. Nevertheless, if the role of garments was limited to this prime function, the fashion industry would have little to do with the cultural, social and creative sphere. Fortunately, garments are more than simple items we put on everyday. As Cedric Mizero proves, clothes are powerful tools designers can use to engage and communicate on different levels.
Cedric Mizero, a multidisciplinary artist based in Kigali understands the powerful role clothes can have in his practice. Formerly raised in a small village called Gishoma in the Western Province of Rwanda, his upbringing plays a crucial part in his practice overall. Moving in 2012 to the capital gave him the chance to collaborate with many creatives in the local scene. A few years in Kigali led him to create his long term project named Fashion For All. The project puts at its core the women and men of the village “inviting people to reflect about the value of each individual and their right to access and enjoy fashion regardless of their age, size, social or economic status.” Under the umbrella of Fashion For All, Cedric released many different projects such as Strong Women (2017) and Beauty in the Heart (2018).

The designer approaches garments as a way to have the attention of his audience and communicate complex social and cultural messages. Alongside his fashion design skills, he also explores photography, spatial installation and film. 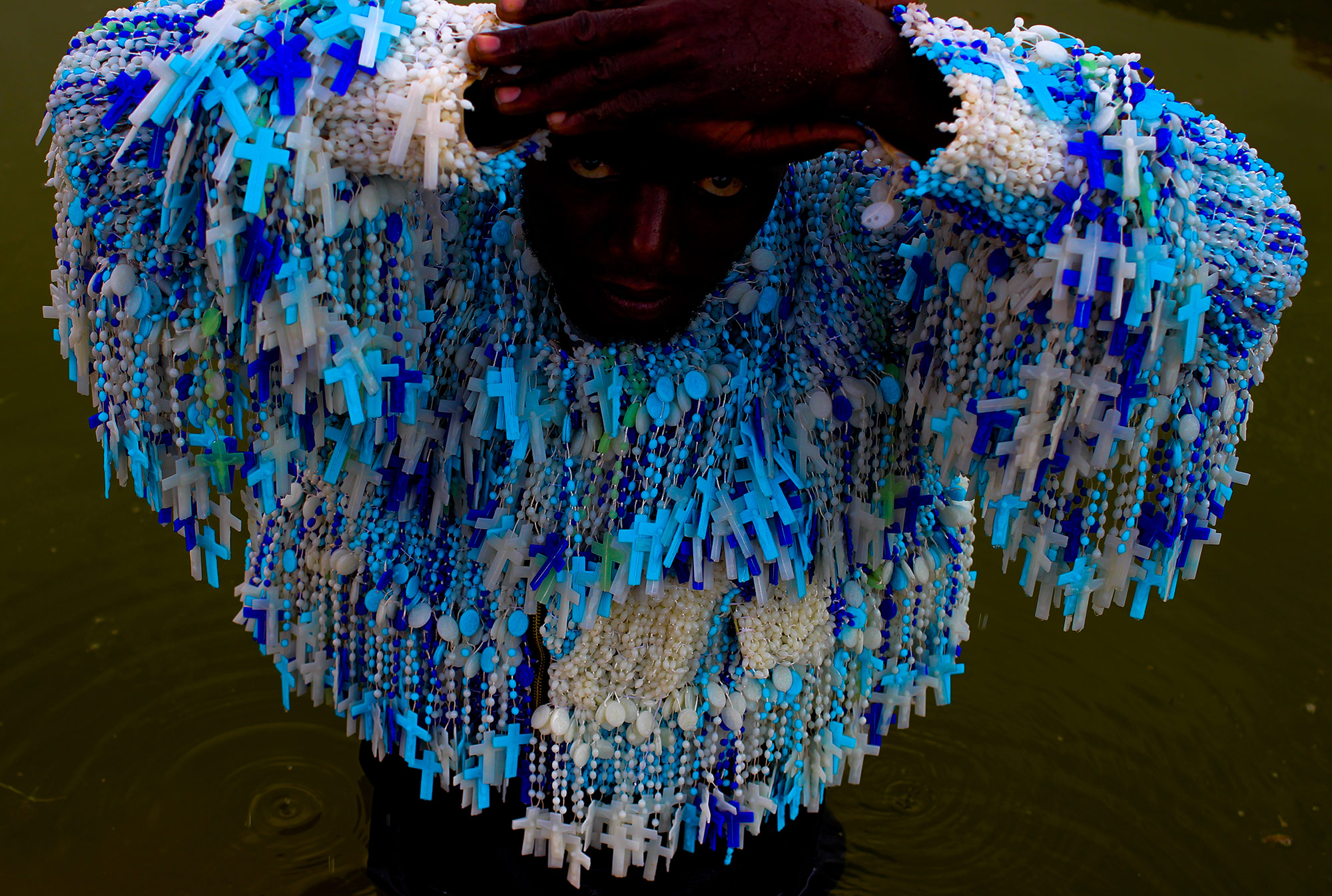 Project: Protection (2020) - Created and directed by: Cedric Mizero
We are very glad to have you on METAL Magazine Cedric. More than fashion design you are investing in multiple creative mediums. Could you introduce yourself and your work?
My name is Cedric Mizero, I am  28 years old, born and raised in Gishoma, Rwanda. I am a self taught artist.
Originally you are from Gishoma – a small village located in the Western Province of Rwanda. Although you moved to Kigali in 2012, you still have a deep connection with Gishoma. How is this relationship with your hometown influencing your work today?
I always believe in strong ideas and memories and the memories from my village are the strongest key to my creative process and the storytelling.
In the capital of Kigali, you are interacting with a lot of artists and fashion designers. How would you describe the dynamic in the city? And how do you experience this energy on a daily basis?
As you know, we are the new generation in my country after the 1994 history. I feel there is a need and courage for artists to show what they want. As well the opportunity to be in Kigali where everything feels popping is a beautiful challenge to create a new path. 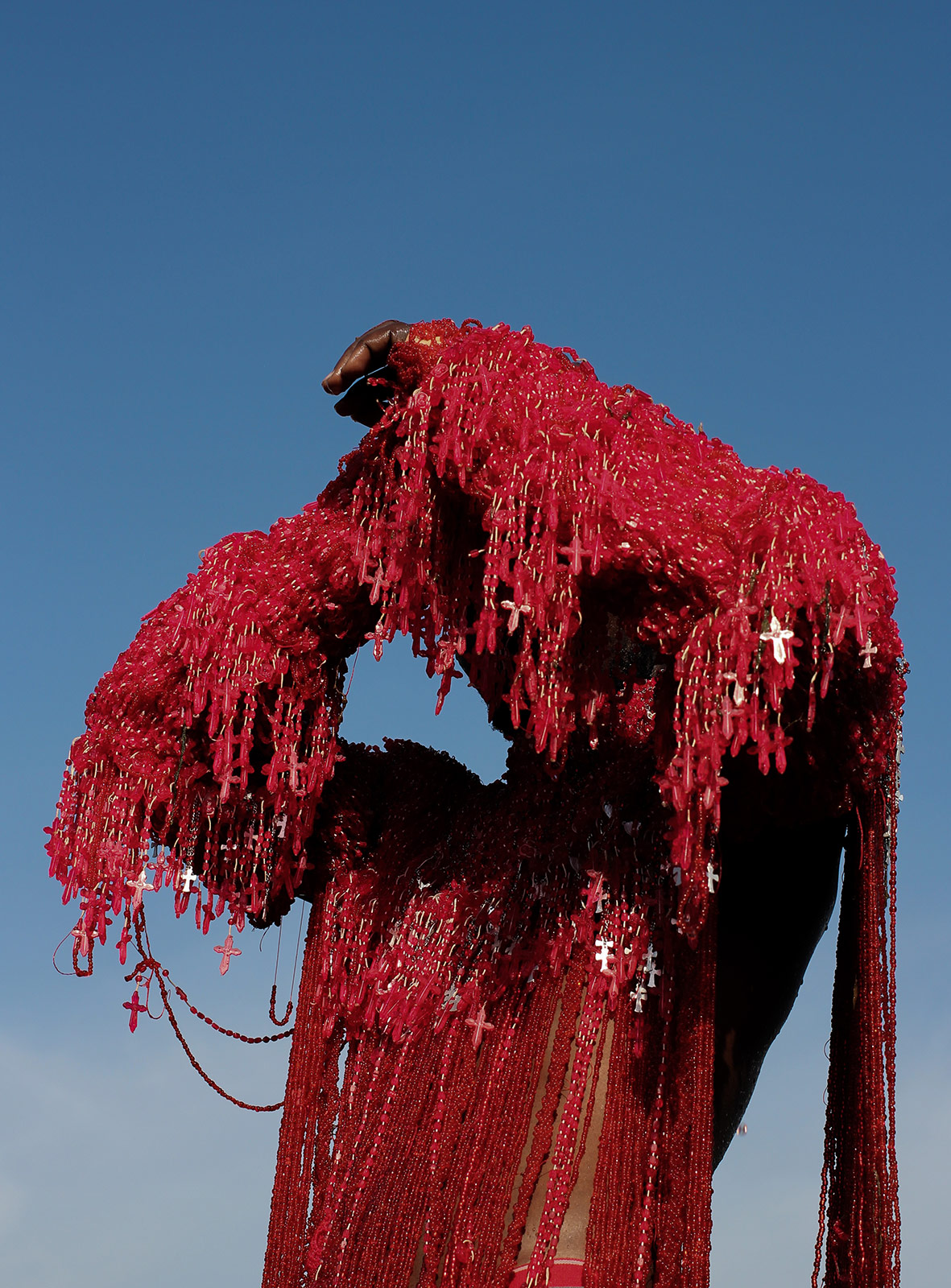 Project: Protection (2020) - Created and directed by: Cedric Mizero
Beyond fashion design, your approach is truly multidisciplinary. From film to spatial installation, you are always finding ways to include clothes in your work. Why does the act of designing garments have a crucial place in your practice overall?
I love colours, fabrics, beauty and fantasy and the relationship our body has with clothes, with that you create an illusion for attention and when you have attention you communicate.
Fashion For All is a long-term project that you started in 2016 and that you are continuing until today. This is a space that is deeply inspired by rural life in Rwanda, it aims to raise awareness on social issues. How do you select the topics you explore under the umbrella of Fashion For All?
I choose the topic based on a deep connection with people and their stories. Also, sometimes it is a practice for myself to learn more about them and collaborate.
Under Fashion For All, you produced projects like Beauty In The Heart (2018) and Strong Women (2017). These two art installations have at their core the topic of women. Why is this topic often recurring in your work?
Of course my mother, since I was young she played a big role in my life, as a storyteller women for me have always come first. I grew up in a place where women play the biggest role in the community. I want people to acknowledge that.
Fashion For All, as its name indicates, is aimed to reflect on the right for every individual – men and women – “to access and enjoy fashion regardless of their age, size, social or economic status.” In a way, you are advocating for inclusivity in the fashion industry. Do you feel the access to fashion in Rwanda is marked by the lack of inclusivity?
Fashion is blooming in Rwanda, as culture evolves, I want people to be aware of it  and acknowledge the power of it. 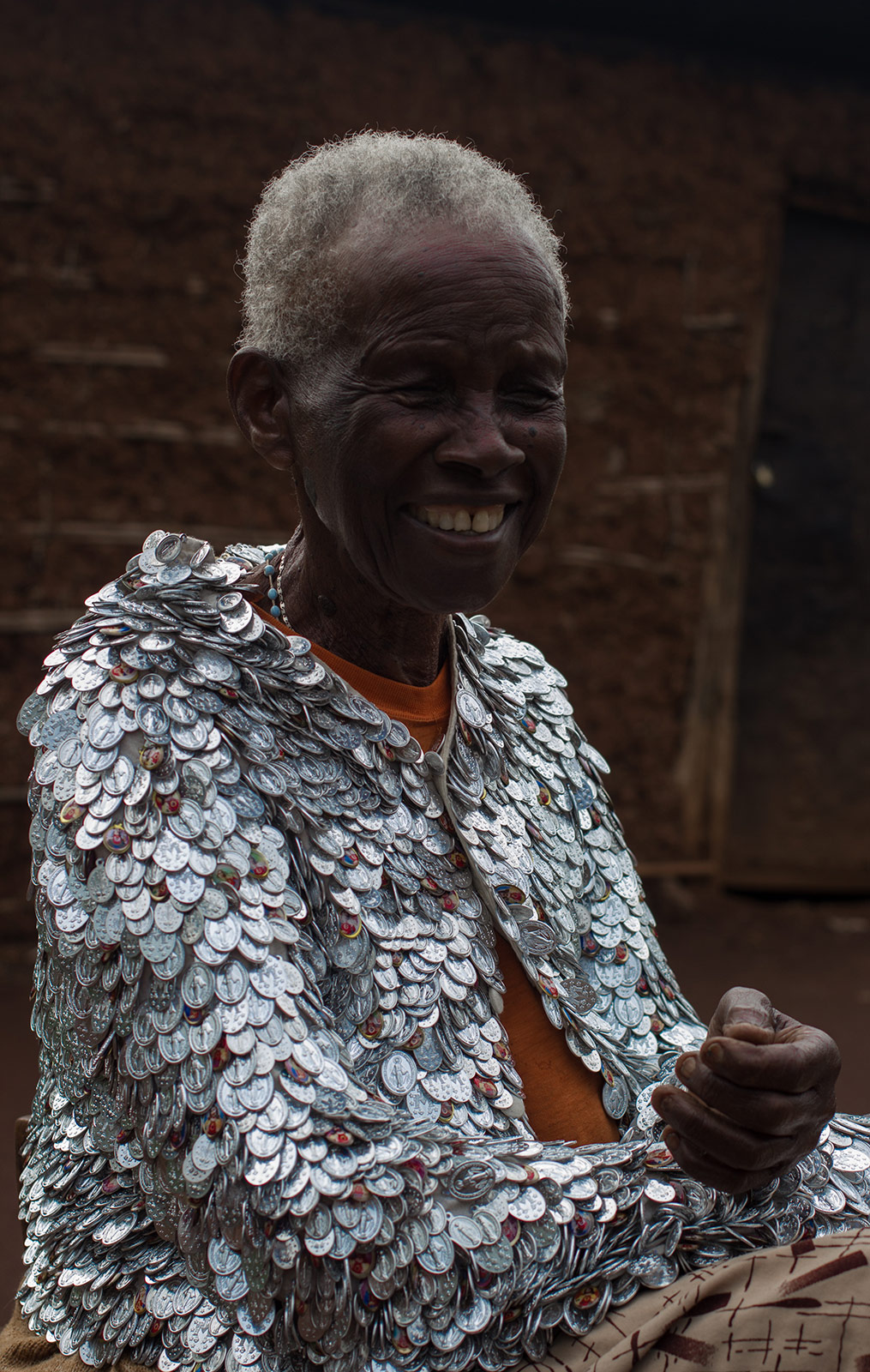 Project: Protection (2020) - Created and directed by: Cedric Mizero
In a more recent work named A New Life In The Village (2019), you explored the dialectic of traditional and modern medicine among rural women. The project discusses the access to modern medicine among the community and the challenges it brings. How did you visually merge this interaction between long-established and contemporary practices?
For me it was more of telling a tale to the audience of what happens in the village, and then I needed attention.
Since 2017, you have also done a lot of work as costume designer for movies. From Petit Pays released in 2019 to Never Look At The Sun by Baloji in 2019, your work experience in the movie industry continues to expand. What did you learn from these experiences – on a professional and personal scale?
I fell in love, by working in movies as a costume designer made me realise the power of moving images and the opportunity  it gives to put everything from installation to painting to endless things in one form of art. That made me dream more.
The African Continent is constantly evolving and changing. Recently, creative fields – fashion design included – have been largely invested. Emerging aesthetics and aspirations are coming from different countries from Ghana to Kenya. What are your hopes for the creative fields in Rwanda? And for the continent overall?
I believe that Africa itself is light, and light is light. For the creative fields in Rwanda there is energy and a lot of hard work. 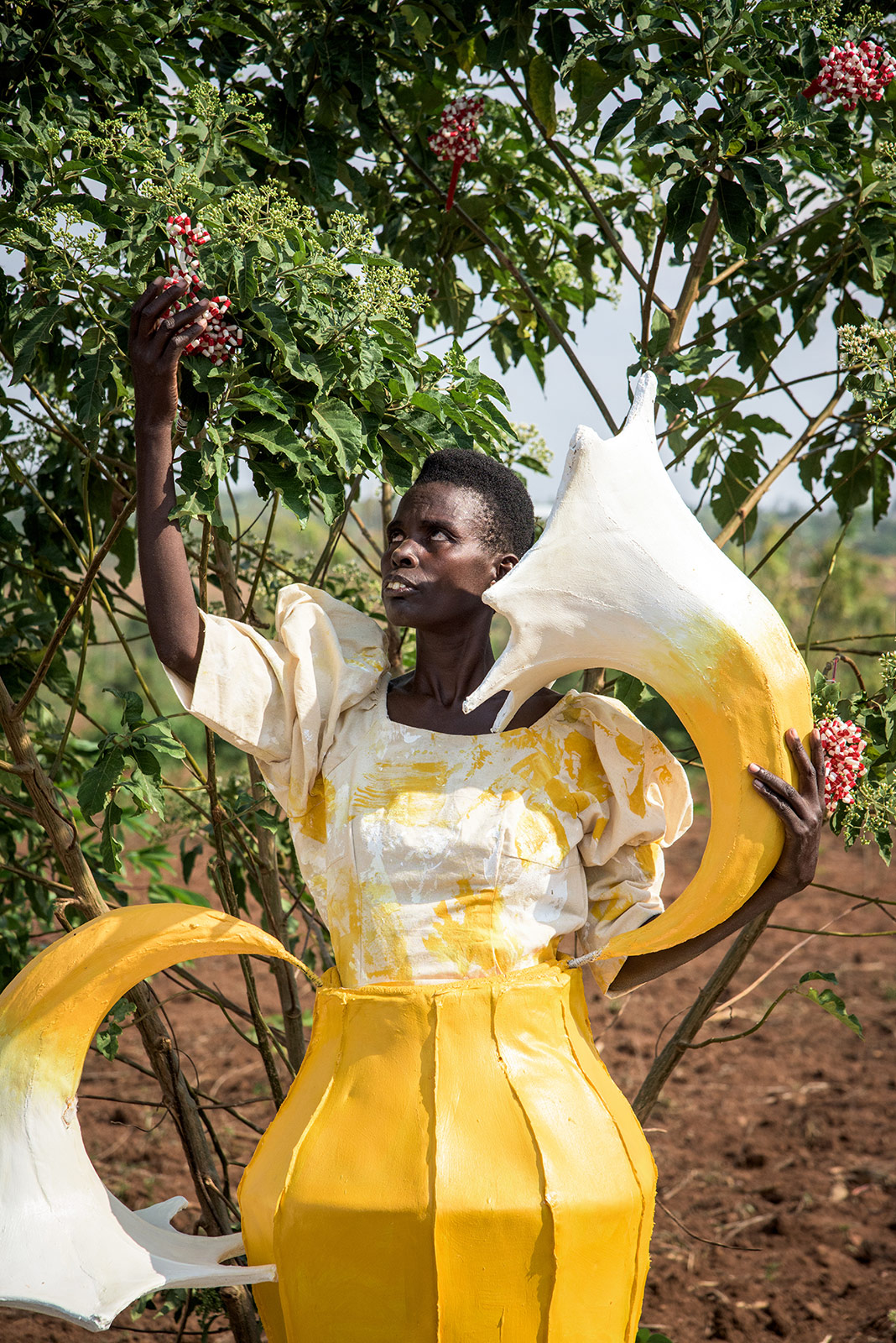 Project: A new life in the village (2019) - Created and directed by: Cedric Mizero - Model: Nyiraneza Everiola - Commissioned by: The Store X The Vinyl Factory 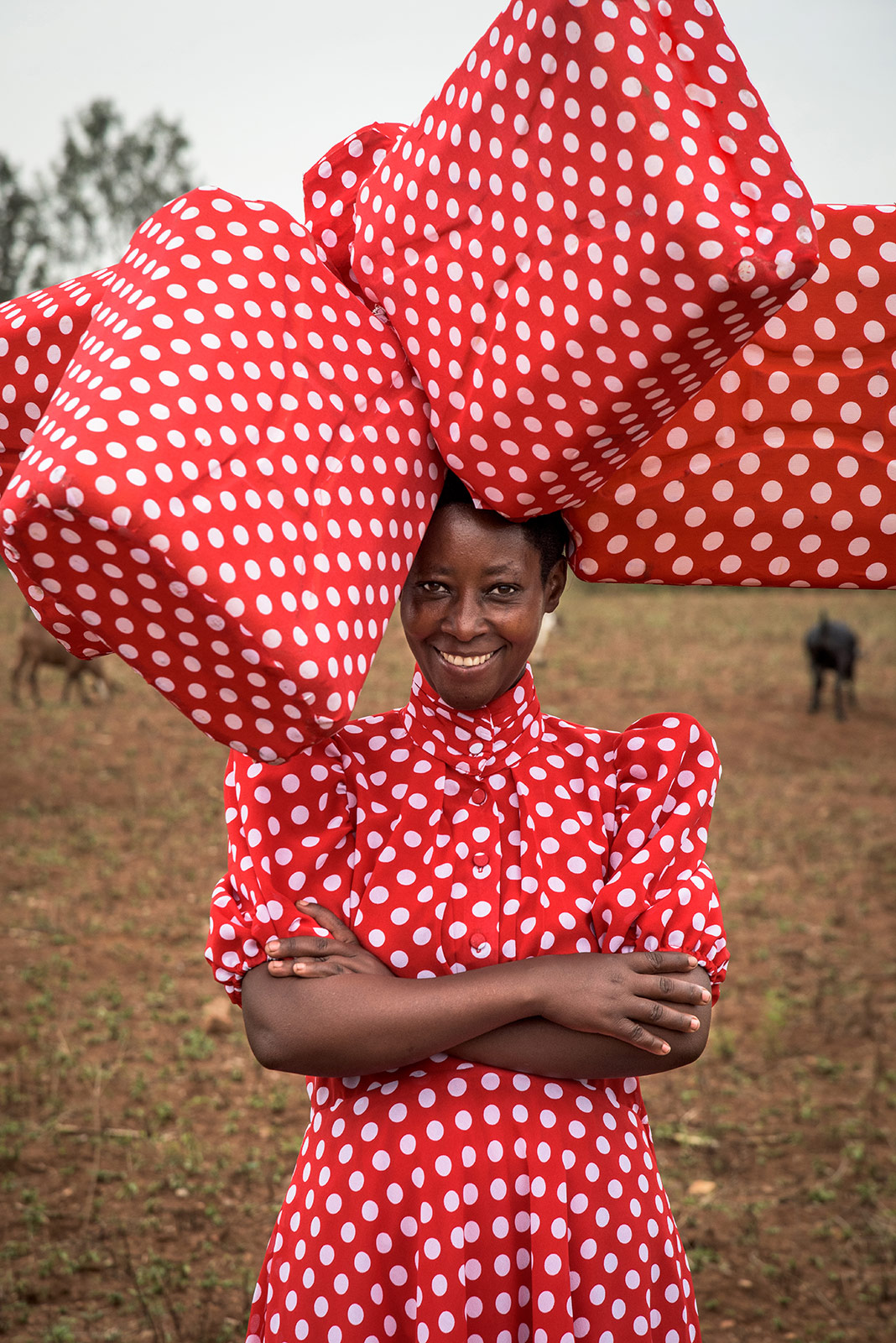 Project: A new life in the village (2019) - Created and directed by: Cedric Mizero - Model: Mukankuranga Alvera - Commissioned by: The Store X The Vinyl Factory 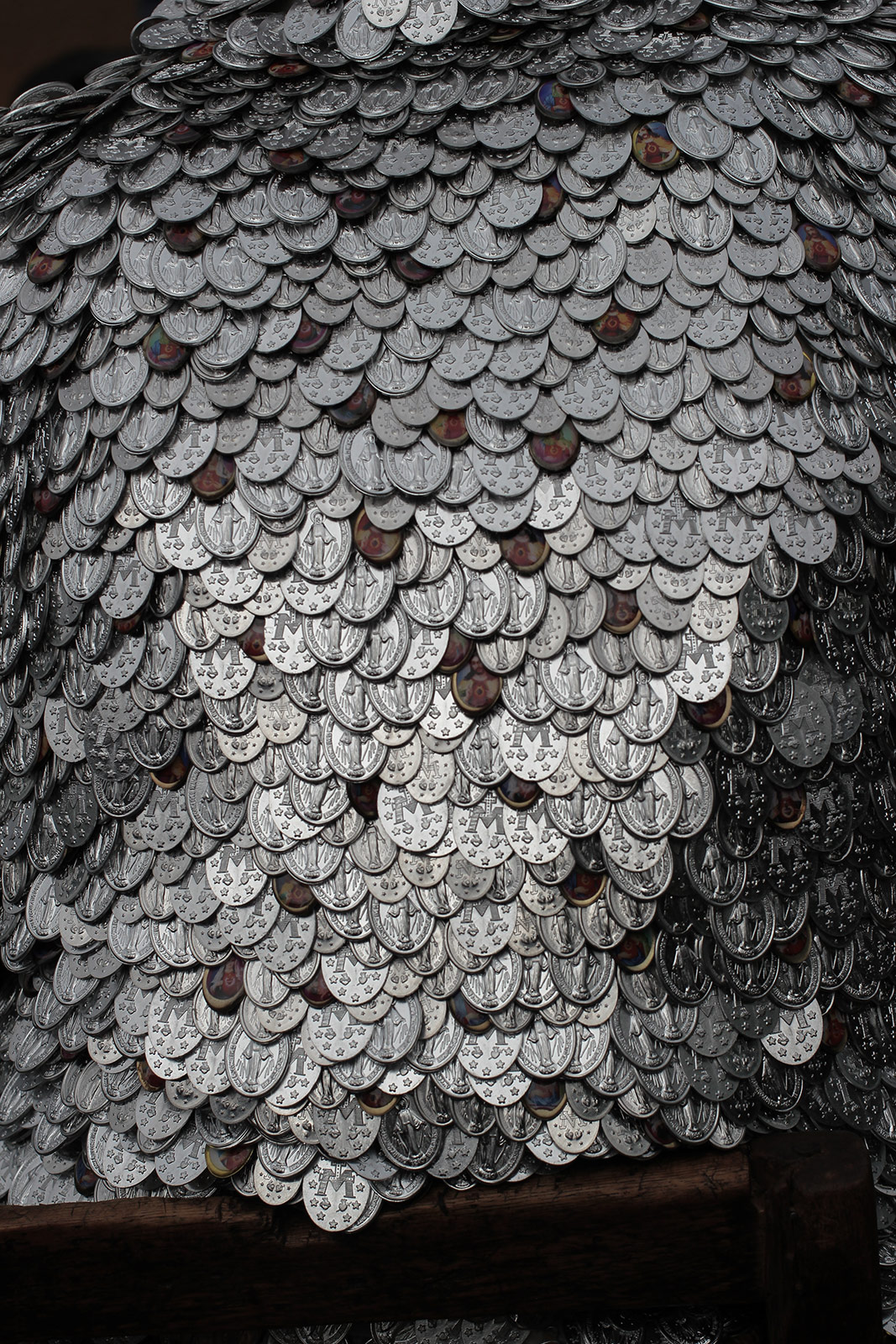 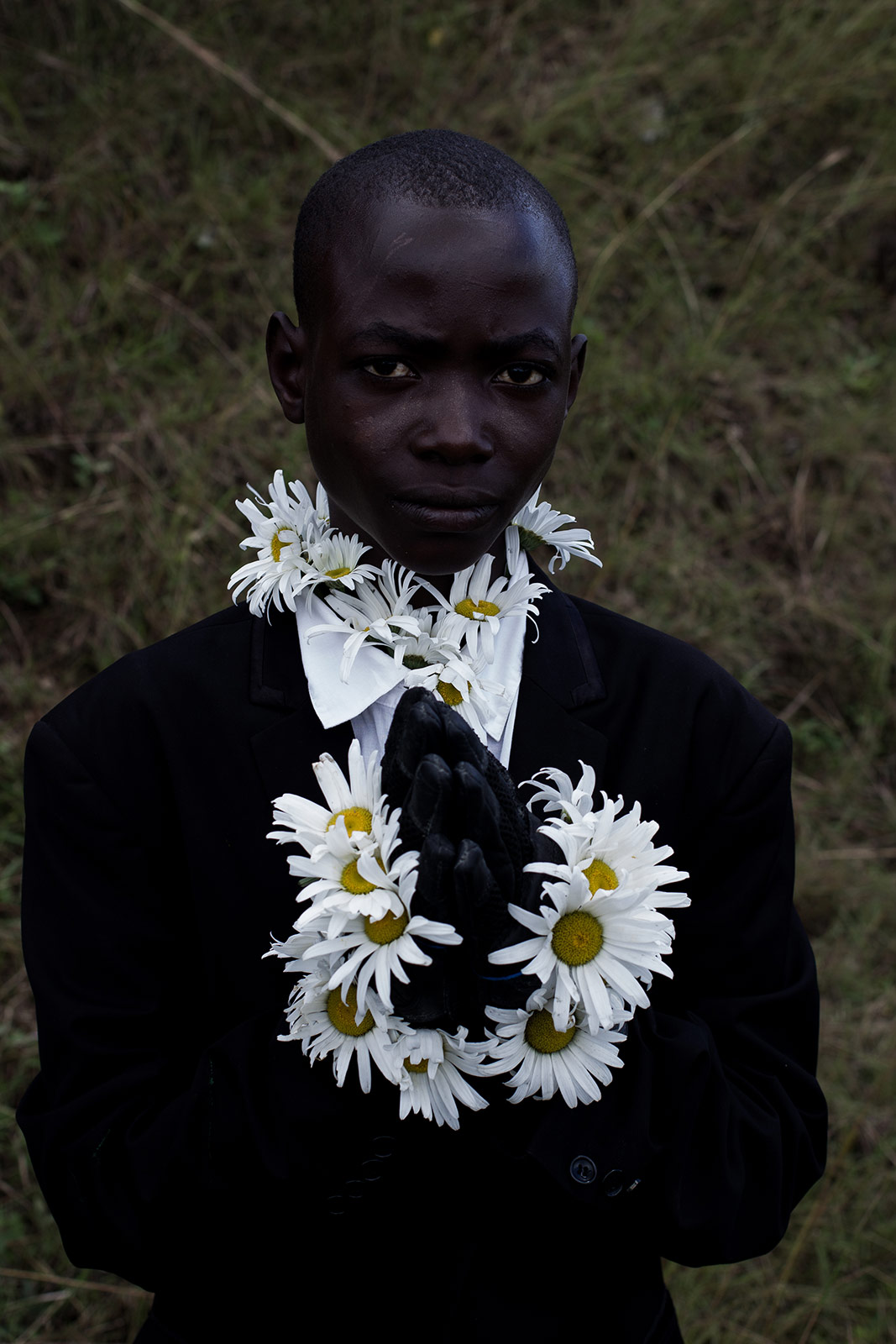 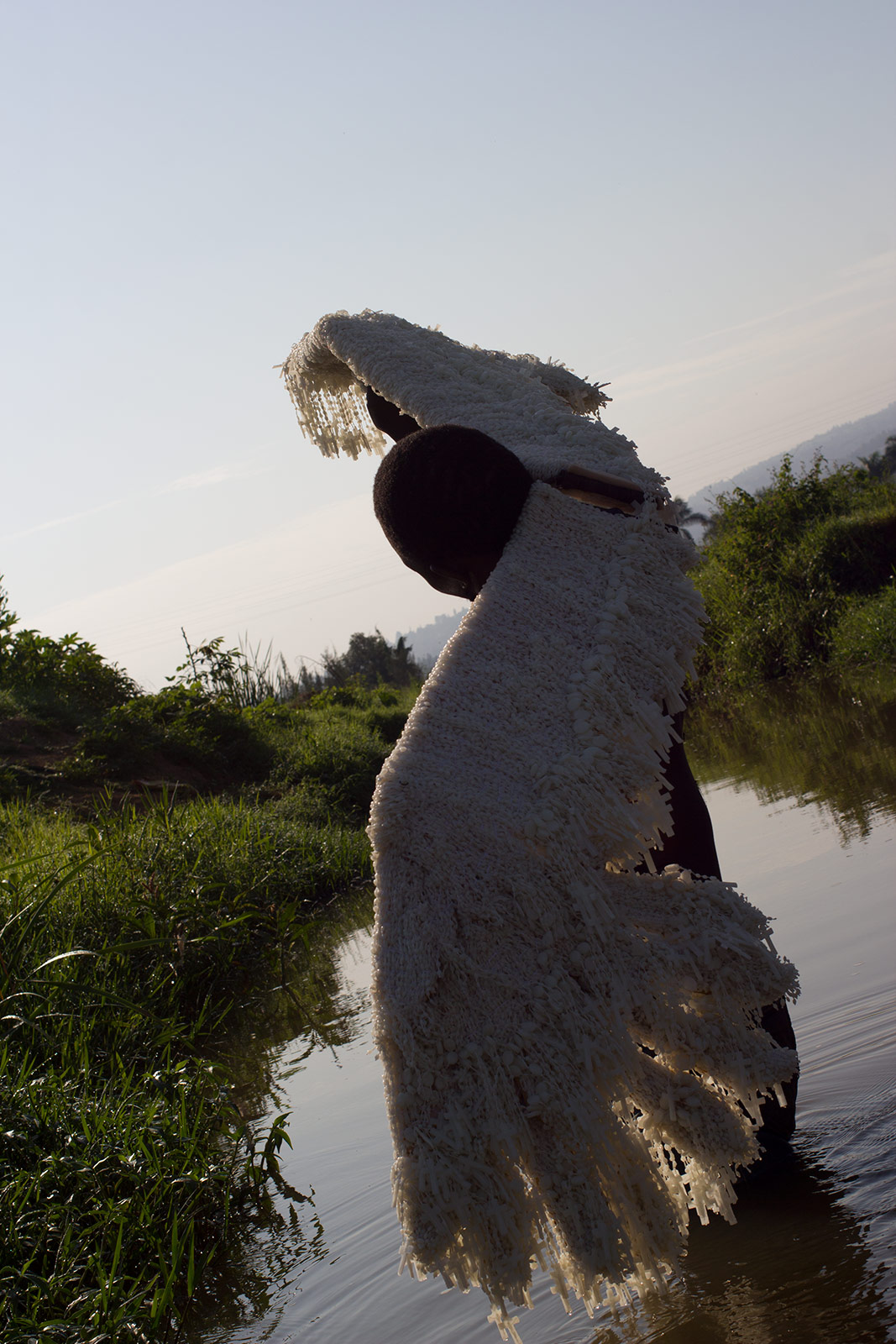 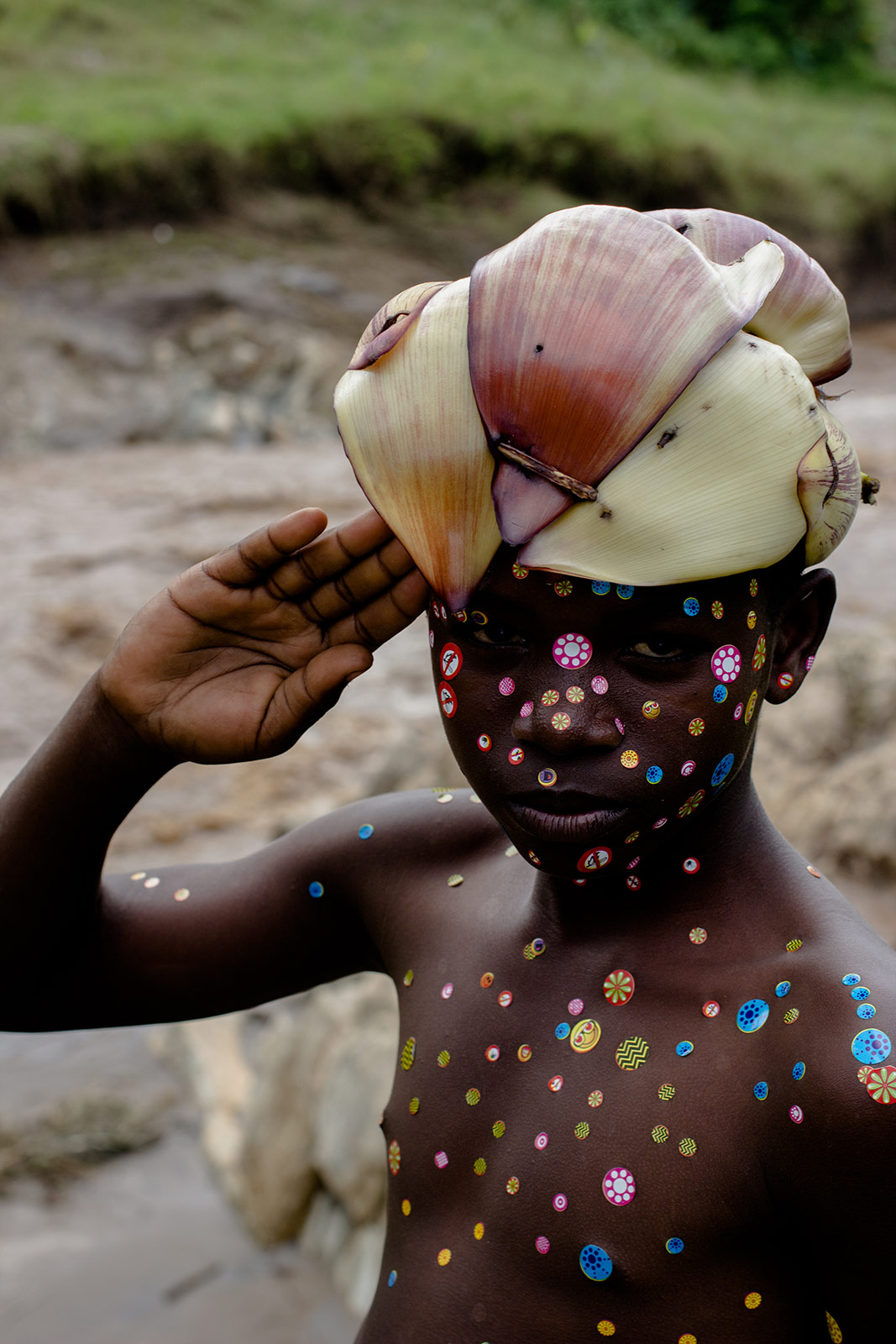 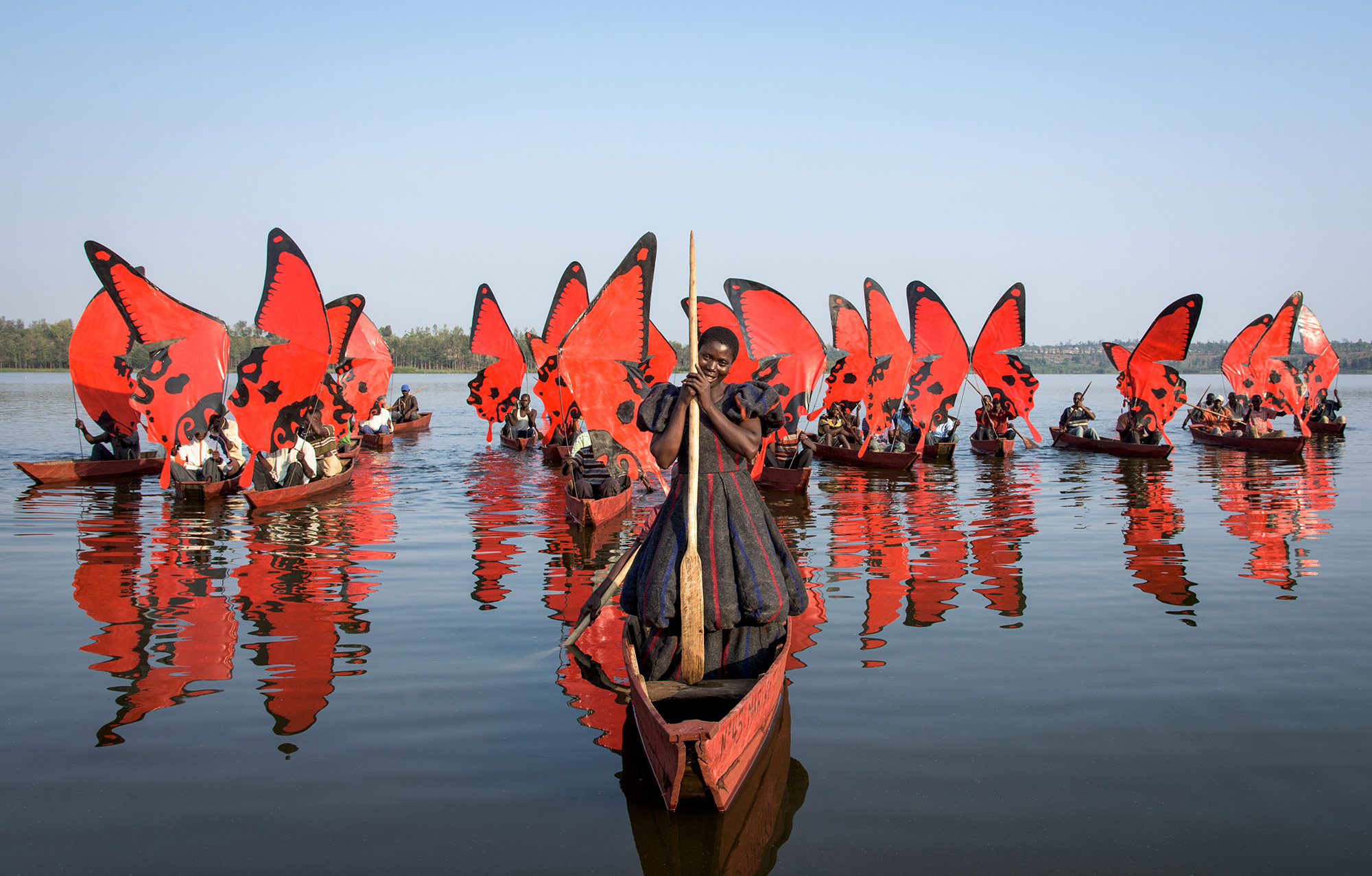 Project: A new life in the village (2019) - Created and directed by: Cedric Mizero - Model: Yosepha Makamana - Commissioned by: The Store X The Vinyl Factory